Six AM is a quiet time for getting my blogging done. There is too much socializing in the evenings.


The departure time today was 9:00 AM sharp from the lodge. Some of the riders decided to take the day off after the three day ride down. The rest of us were underway almost on time. The weather was clear with a forecast of possible thunderstorms later in the day.

I led the whole group out US 74 West and north on NC 28, aka the Hellbender. By prearrangement, Two Rivers owner Blaine pulled out of line just before the four lane ended and passed me. Those that wanted to move at a faster pace went with him. I maintained a steady speed for the rest of the riders.

Our first stop was at Fontana Dam. Blaine again led the faster riders out first for the next leg up to Deals Gap. The rest of us maintained the  same steady pace through the tighter corners and arrived soon after. The Deals Gap Motorcycle Resort wasn't very busy, considering that it was a nice day in June. 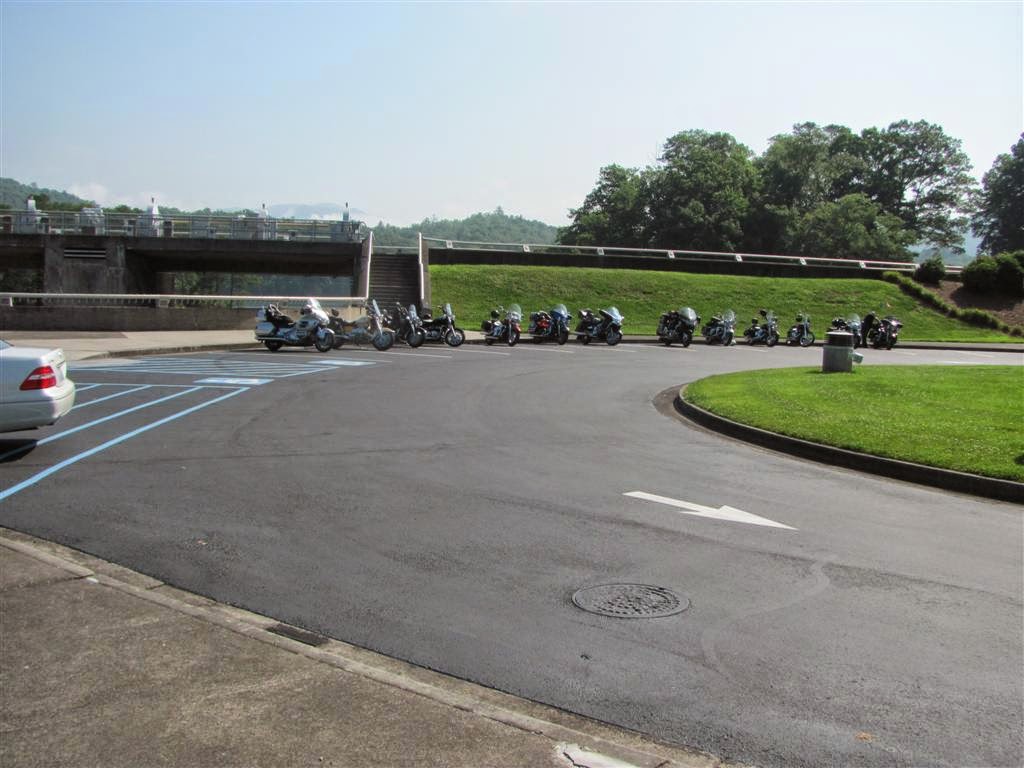 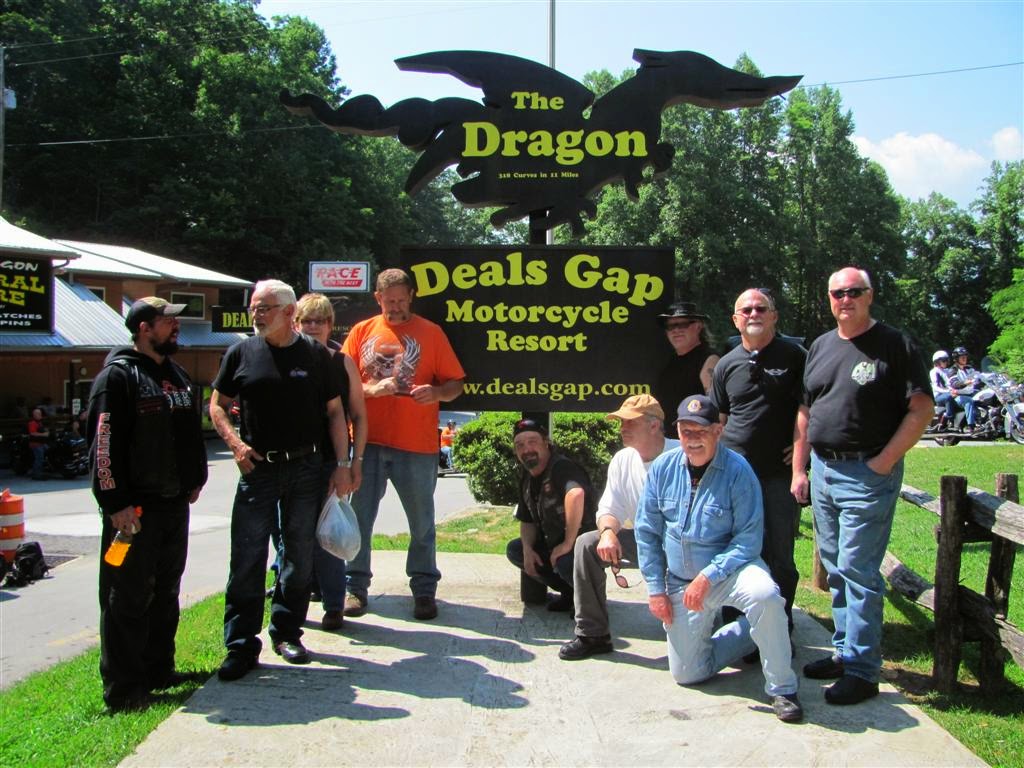 Ready to slay The Dragon 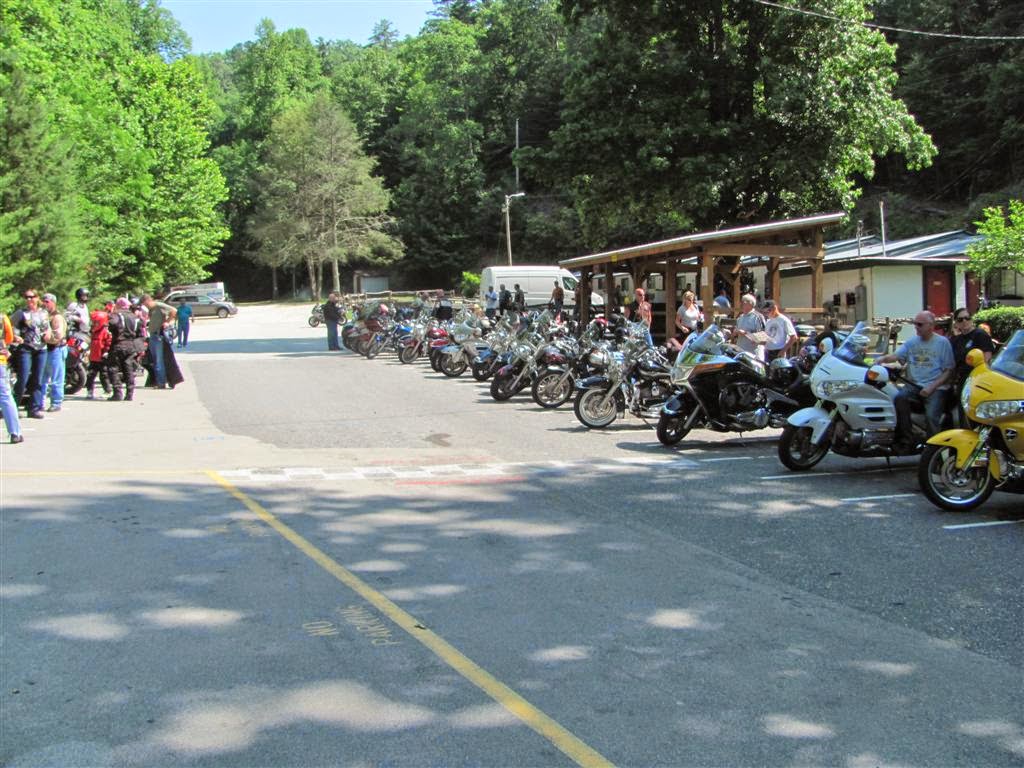 Our ride through the Tail of the Dragon was an individual thing. I told everyone to ride their own ride and we would meet in the pullout at the other end. Blaine and Don left first, roaring up the hill into the Gap. Then I watched others of our group going and finally left myself. I had planned on an easy run but got behind a car just as I crossed the Tennessee state line. Passing it and a group of bikes ahead (our members) got my juices flowing and I ran the whole stretch harder than I had planned. I did get held up by a Suburban and a Nissan, both of which eventually pulled over. Unfortunately, I was behind one or the other of them as I passed all three photographers. Blaine, Don and Terry were waiting when I got to the end and Biker pulled in right behind me. He had also passed the others with his GoPro video camera.

Biker's Vulcan 2000 would not start. It sounded like a low battery. Some of us tried to push it down a bit of a grade but there was no way that gravity and rubber could turn over those huge 1,000 cc cylinders. No one had booster cables, so Rob jumped in Roger's car and headed back to the Resort to get some. He didn't know that Gary had some wire and fashioned a makeshift booster setup. They hooked it to Ray's GL-1500 and soon the big Vulcan fired up. 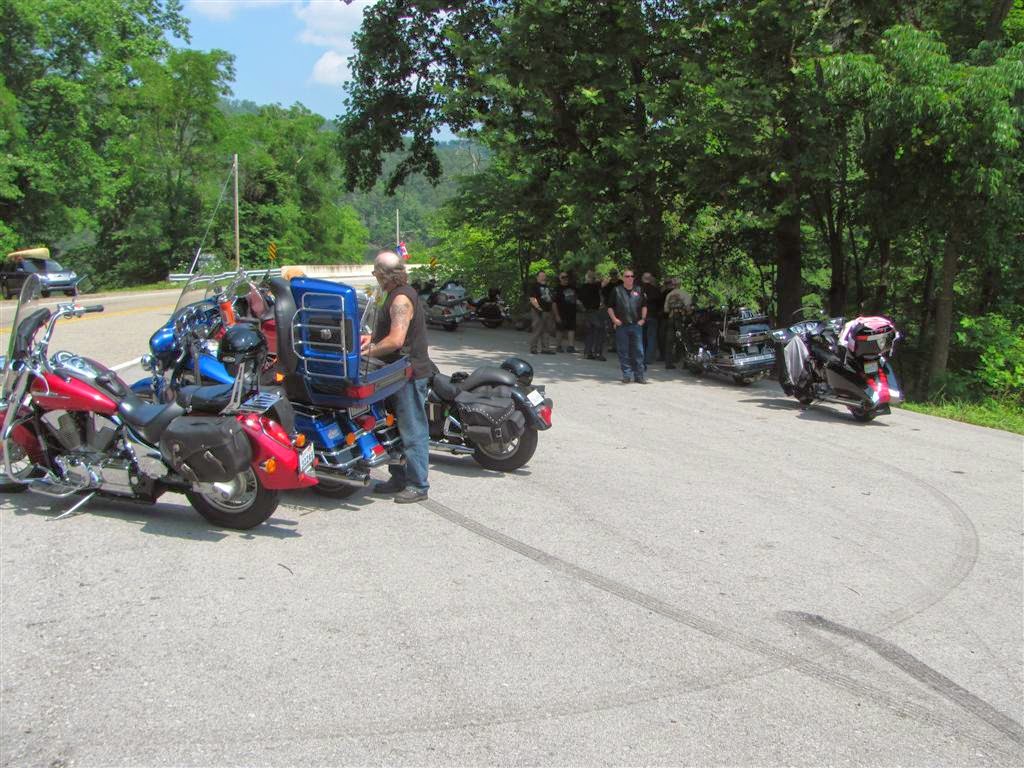 Waiting at the tip of The Tail 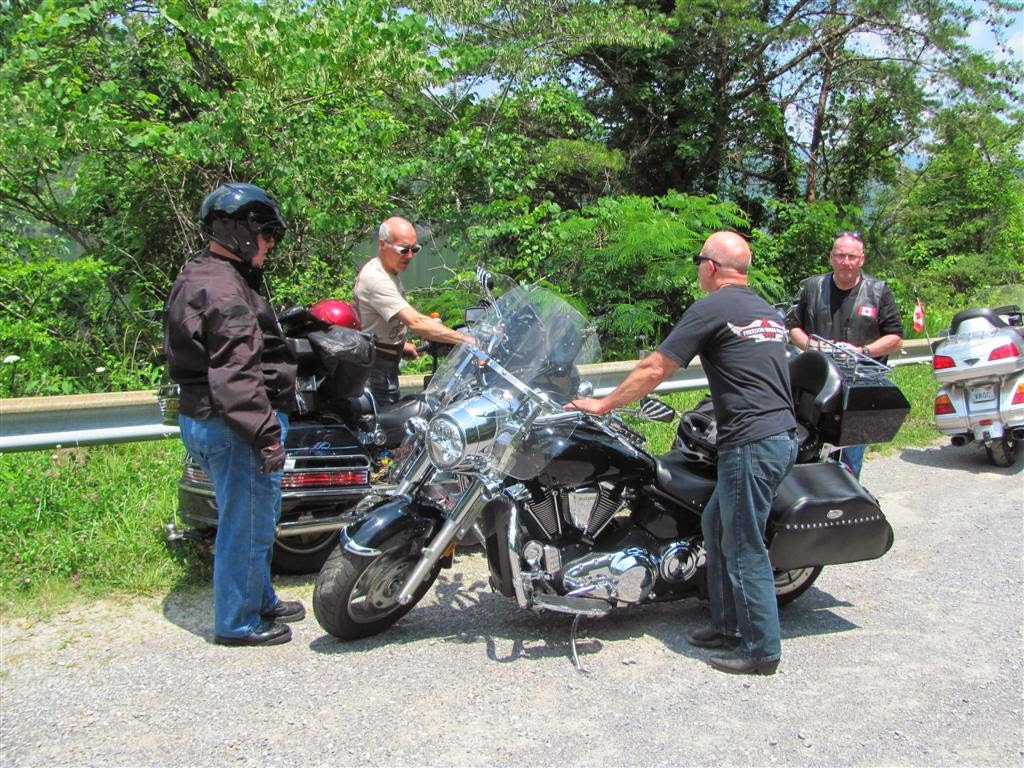 Now we were left with Rob's Victory sitting at the pullout. Biker, Ray and Gary rode on to the lunch place.  Mike and I stayed to watch the bike and wait for Roger and Rob to returrn. We met some nice people from all over in the ensuing hour. When they got back, Rob wasn't feeling well, probably car sick from being in the passenger seat for two trips through the Dragon. He asked the shortest way back to the lodge.  I pointed the way he had just come. Mike volunteered to accompany him back while I went on to let the group know what was happening.

The intended restaurant was closed but Don and Paul were still sitting on the porch. The rest were at the place just around the curve and a few were still getting food. There was a bit of debate because we were a couple of hours later than planned getting to this spot. It was twice as far to continue the loop as it was going back. Blaine pointed out that the roads weren't as tight going forward, so we opted to move on. I let him lead and pulled out second as we rode up Tn 72 to US 411. We followed that southeast to State 360 where we stopped to top off the fuel tanks. The Tennessee gas price was $0.30 per gallon cheaper than North Carolina.

I dropped back to ride at the end of the group as Blaine led us down 360 to Tellico Plains. There, he made a left turn onto the Cherohala Skyway. The temperature was now showing as 31C in the sun, but was nice and cool in the shade of the trees. We wound our way long and started to climb before Blaine brought the group to a halt at Turkey Creek Overlook.

We regrouped. Bev and Barry decided they would hang back and travel their own pace the rest of the way back. Paul stayed with them. I remained at the back of the main group as we climbed and crossed back into North Carolina. Unlike the tight turns of The Tail of the Dragon, the Cherohala is more open with sweeping curves. 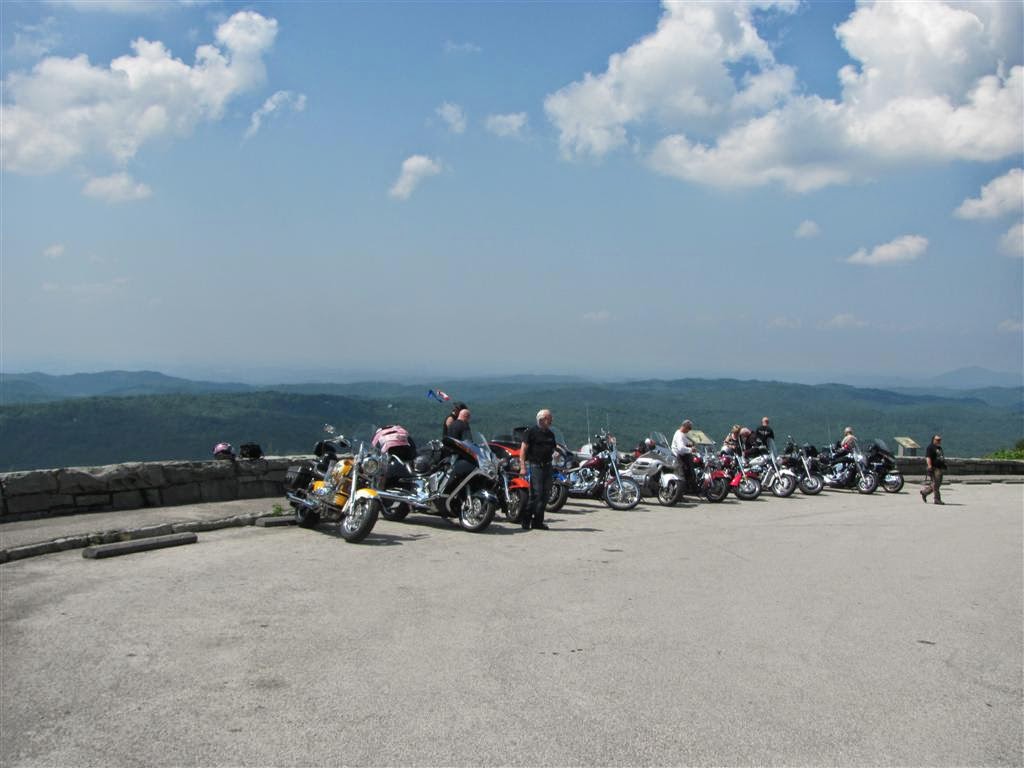 As we were riding the last winding stretch into Robbinsville, we came around the corner and saw a bike off the road. Then we saw it was Rick. He had caught a floorboard and then the front tire had found the soft shoulder. He was covered in mud and the bike was missing a mirror but, other than that, both were in remarkably good shape. Giving the bike a once over at the next gas station, they found that there was cord showing through on his rear tire. I have seen that before. Sometimes people who don't ride distance don not consider tire wear when they set out on a long trip. Blaine took him to Wheeler's to see about a new shoe.

I led the rest of the group back to Robbinsville, where we turned left on 143 and proceeded through Stecoah Gap to NC 28. On 28, we passed a group of Harley's with Ontario plates. The number of "Yours To Discover" tags astounded me. We reached US 74 and had to make a left turn from a stop sign. Traffic up 74 was heavy but a lady in a car stopped, held them up and waved for all of us to go. That was very kind of her.

On one hill back to Bryson City it rained on us. Six drops. But they were big drops. We got into Two Rivers Lodge about 4:30 and found Bill (Southern Draw) had come by to see us. He was sitting on the porch getting to know people. He is organizing the VROC Wandering Rally on this same spot in early August. 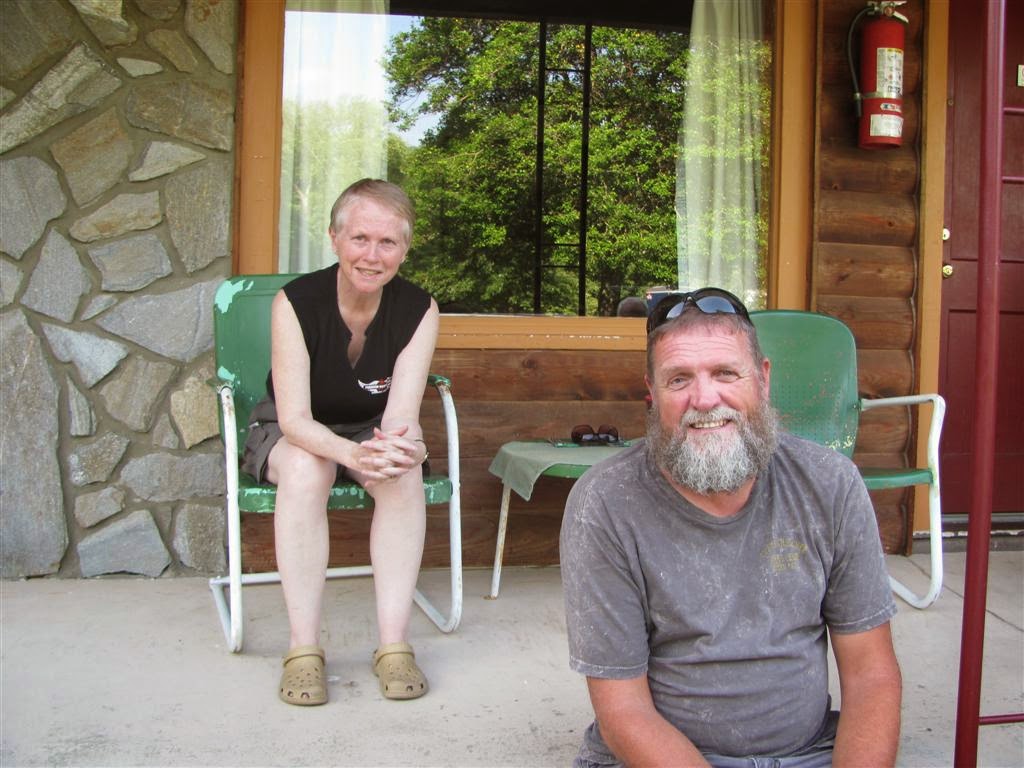 Some of the club headed to the Granny's Restaurant buffet in Cherokee. We went into Bryson City with Bill instead, and met his wife Carolyn (Southern Charm) for a light supper at Arby's. We caught up on who had been doing what. Bill may ride with us tomorrow. 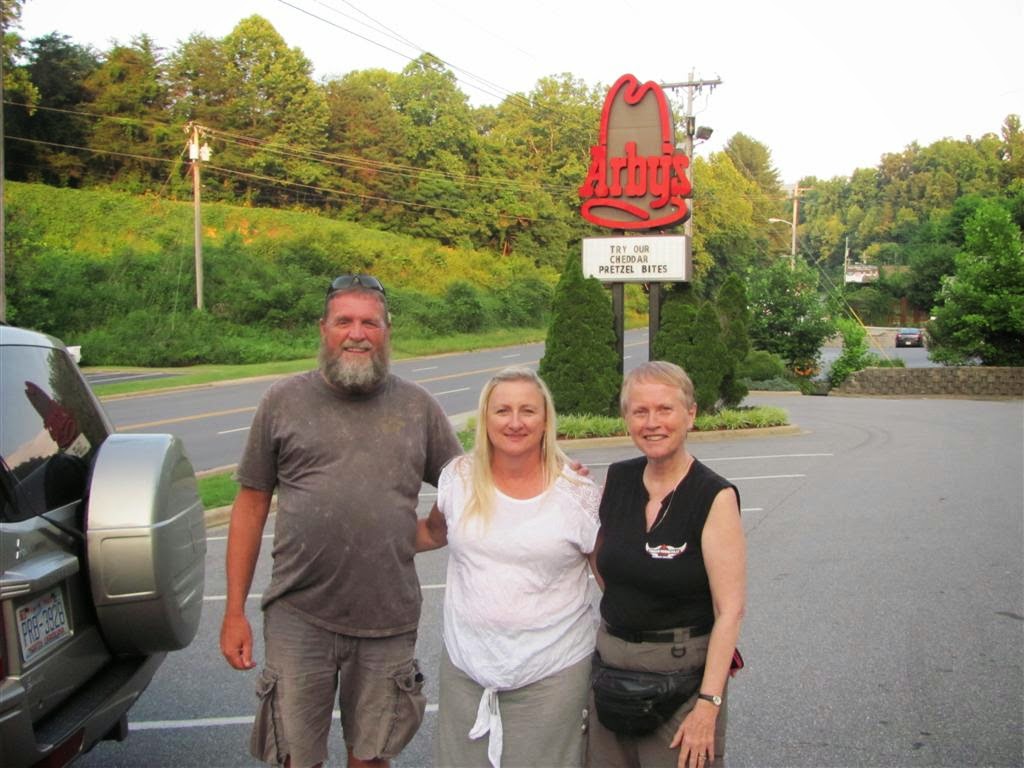 Back at the motel, the party was moving right along. Eventually, Paul got out his fiddle and played at bit. He is very good. Last to bed were Shaun, Don and I. It was not yet midnight. 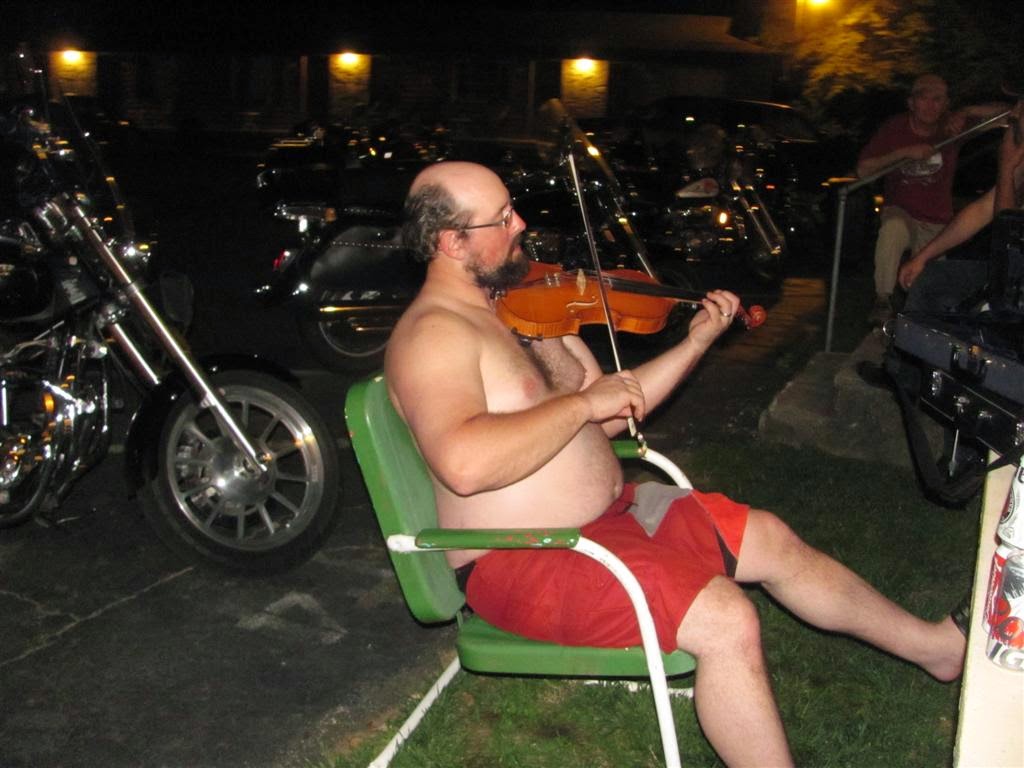 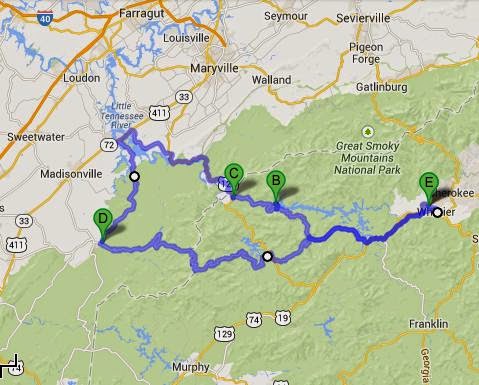