Today will be the last day of this trip. Sandy and I will be making the approximately 660 mile run back to Sudbury while Gary and Dianne will be stopping overnight in Barrie to visit. With this in mind, we were up at first light and ready to go. The last crew had obviously arrived late last night because their bikes were in the lot when we went outside. Percy and Danielle's bikes weren't there but, when they stopped in Johnson City yesterday, Weston was not their firm destination for the day. 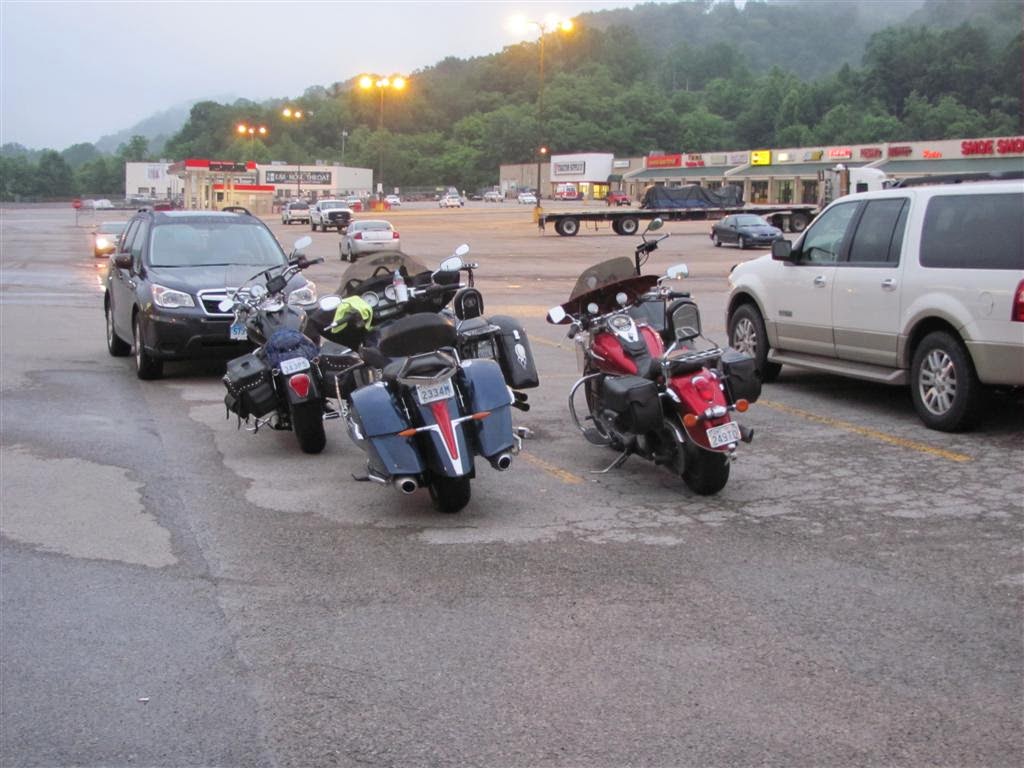 Terry A had already left by the time we headed to our trucks. He is an experienced traveler and knows that a long day should start early. The two trucks/trailers that started our trip almost two weeks ago were rolling northbound on I-79 before 6:20 under cloudy skies.

Trying to save a bit of fuel, I slowed the pace to 60 MPH and Gary held in place behind us. According to the fuel consumption readout on the dash, it wasn't making a lot of difference. In Morgantown, West Virginia, we stopped at a Mickey D's to get some breakfast to go. Although in town, this one as pretty quiet and there was a lot of room to park the rigs. 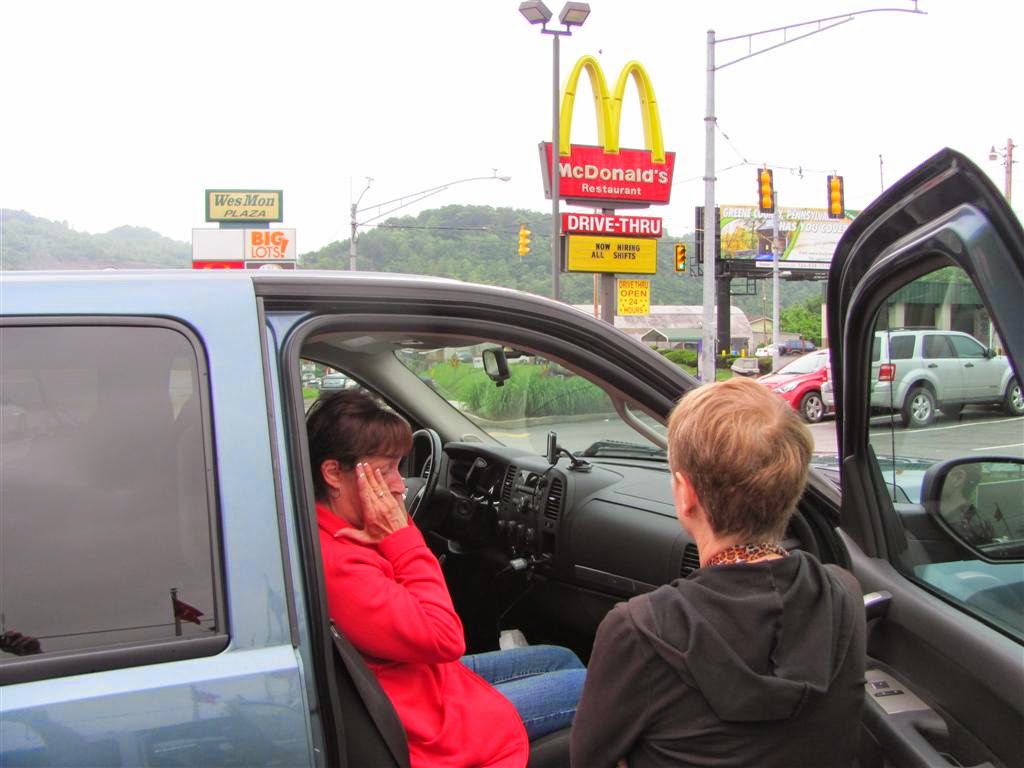 Dianne and Sandy in Morgantown

Soon after, we crossed the line into Pennsylvania. I had warned Gary about the nasty curve at the bottom of the hill where I-79 merged with I-70. The tight left hand curve/merge ramp had a concrete barricade on the outside that was covered with a variety of paint streaks where drivers had misjudged either their speed or their line. Lo and behold, the killer curve was gone, replaced by a nice gradually curved ramp. I wasn't sad to see the change. 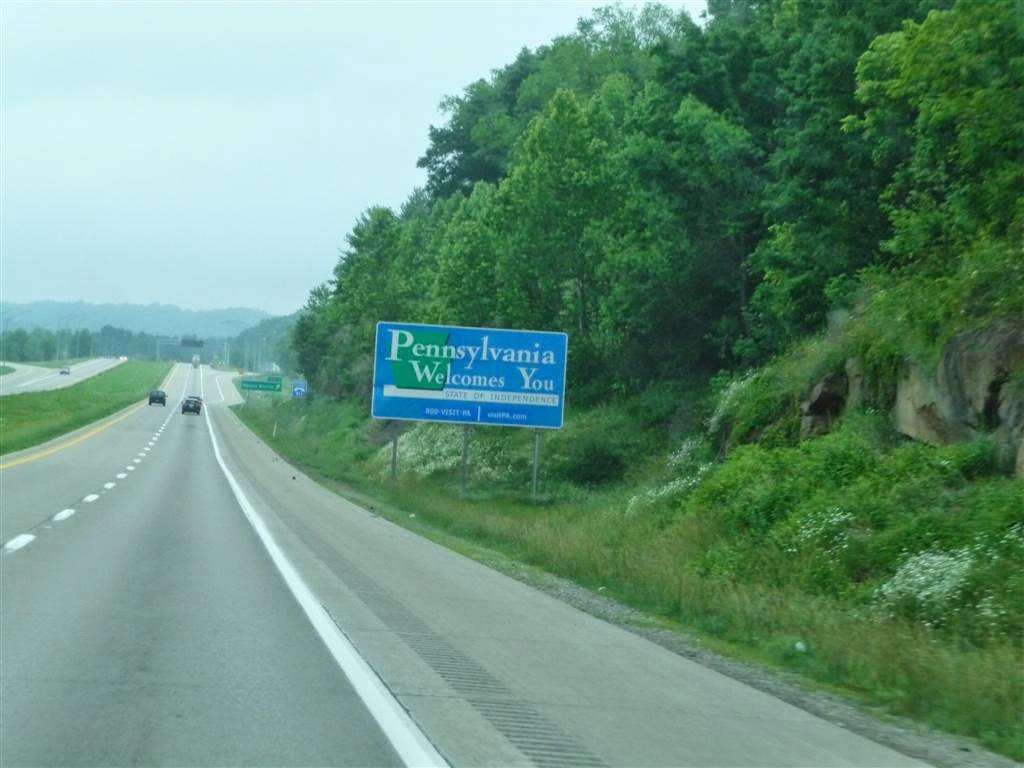 Another state closer to home 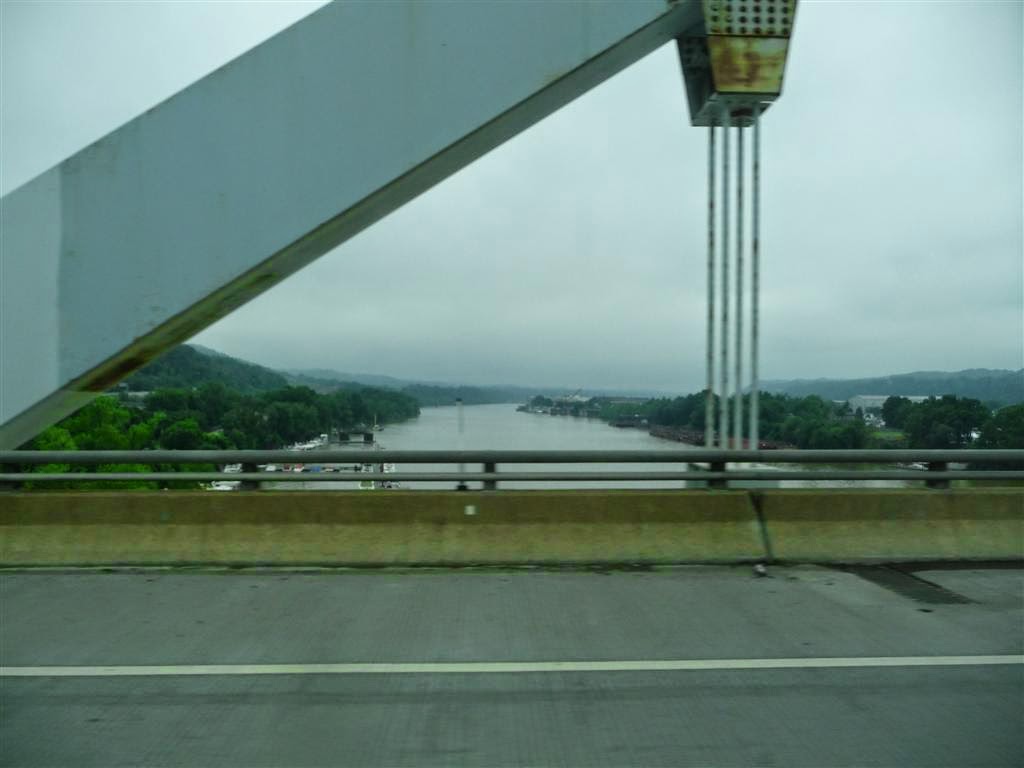 We slid past Pittsburgh in light traffic. Not far north of the city, Gary L and Cheryl passed us. Although they left later, they were moving along at 65 MPH compared to my 60. The V-6 in his Acadia must have been humming right along. I came to the conclusion today that the five MPH reduction in speed didn't do a thing for my mileage. Savings can, however, be had by managing the way uphill grades are handled. Then again, I already knew that. A six speed transmission wouldn't hurt. Perhaps in a 2010 or 2011 Tahoe. 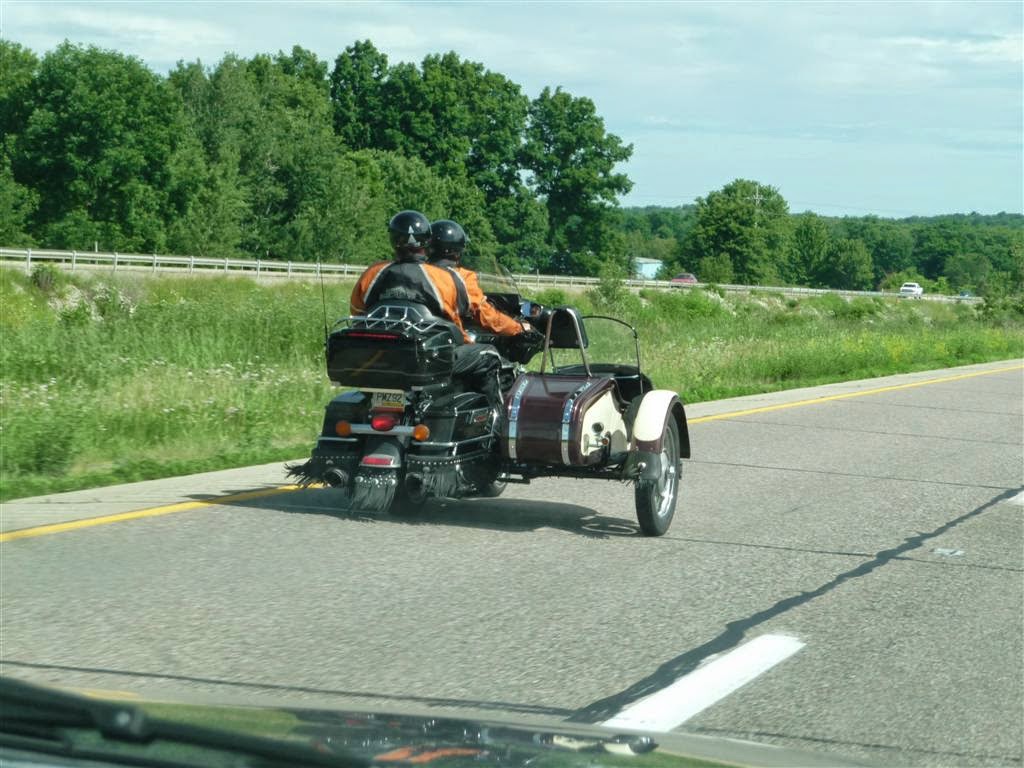 Odd that the chair is empty 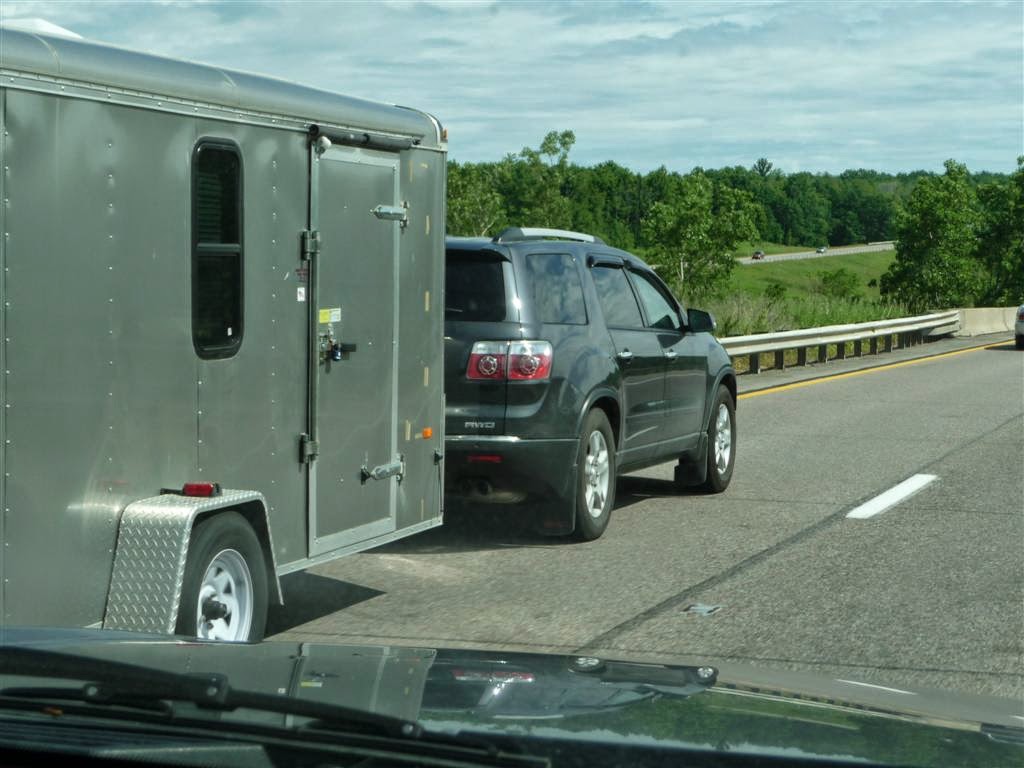 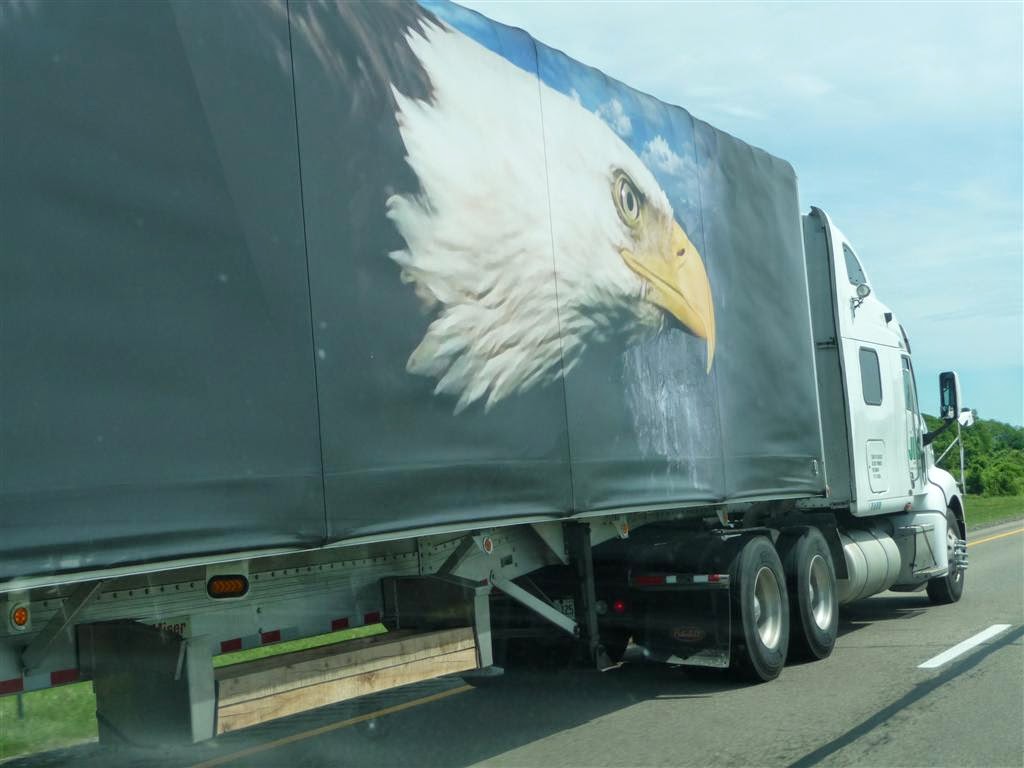 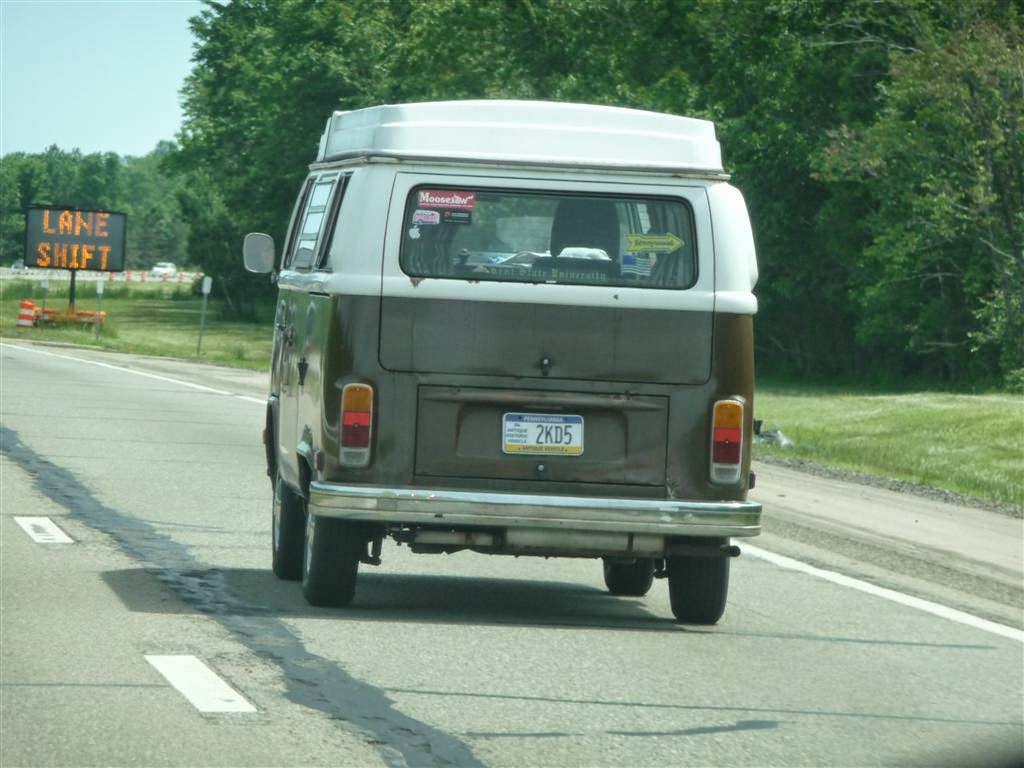 It isn't chartreuse but it is a micro-bus 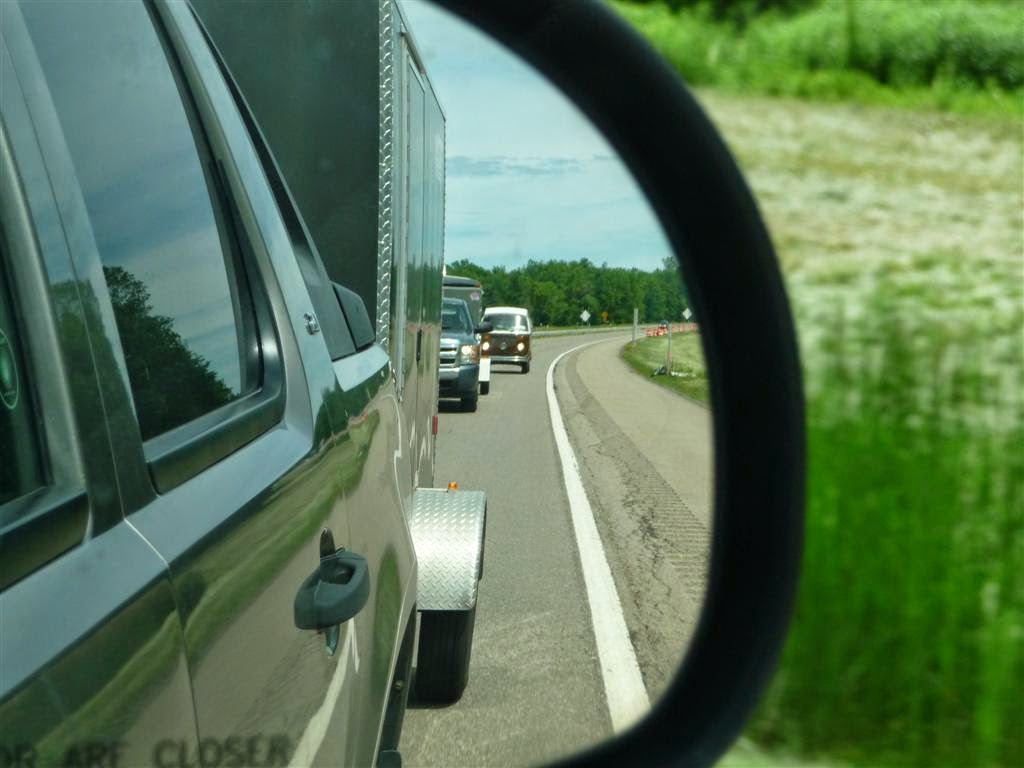 We stopped at a rest area about forty miles south of Erie, Pennsylvania. I was feeling some fatigue and a bathroom break was in order anyway. A few minutes walking around in the cooler 20C temperature cleared my head and I was good to go again. We did express our appreciation of these fine facilities and wondered why Canadian freeways could not have something similar.

Gary and Cheryl must have stopped somewhere as well, because they passed us again just as we were about to reach I-90 in Erie. Once on the NY Thruway, I was pleased to note a Texting Area sign on what had once been a pullout just for big rigs. This is a nice feature that provides an alternative to texting while driving.

There was one more stop at the Angola Service Area before Buffalo to use the facilities and top up with cheaper US fuel before hitting the border. The price was high by US standards but was a major bargain compared to what we would pay on the Canadian side. 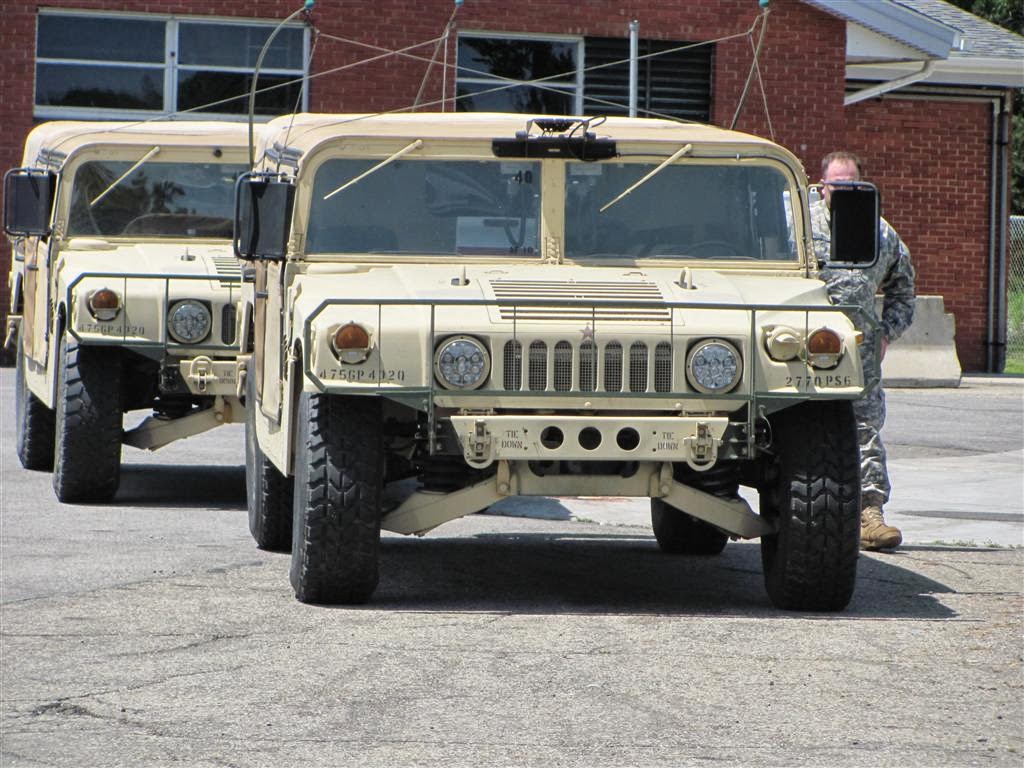 We made it to the Peace Bridge and found out that everyone in Buffalo had decided to visit Canada on this fine Saturday. There were two lanes open across the bridge heading our way (the middle lane can accommodate either direction based on traffic). The lines moved fairly quickly, however, because almost all the Customs booths were open. Oddly, one of the biggest lines was the one dedicated to NEXUS users. We took a regular lane anyway to stay with Gary and Dianne. 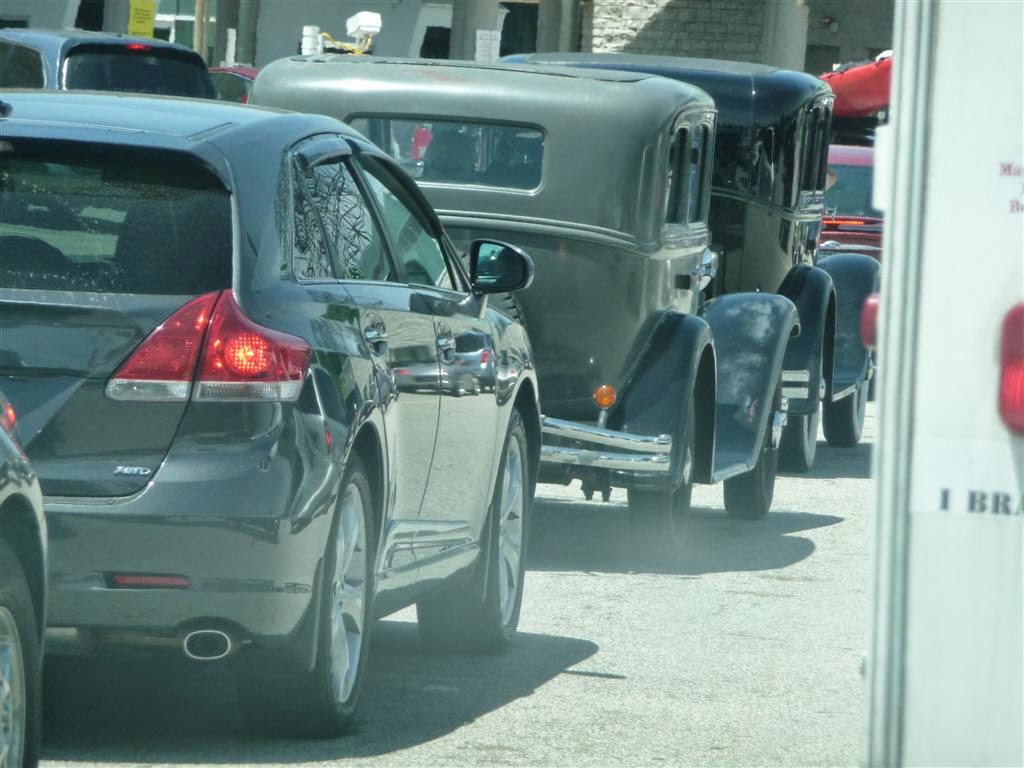 Some of the older cars we saw around Fort Erie 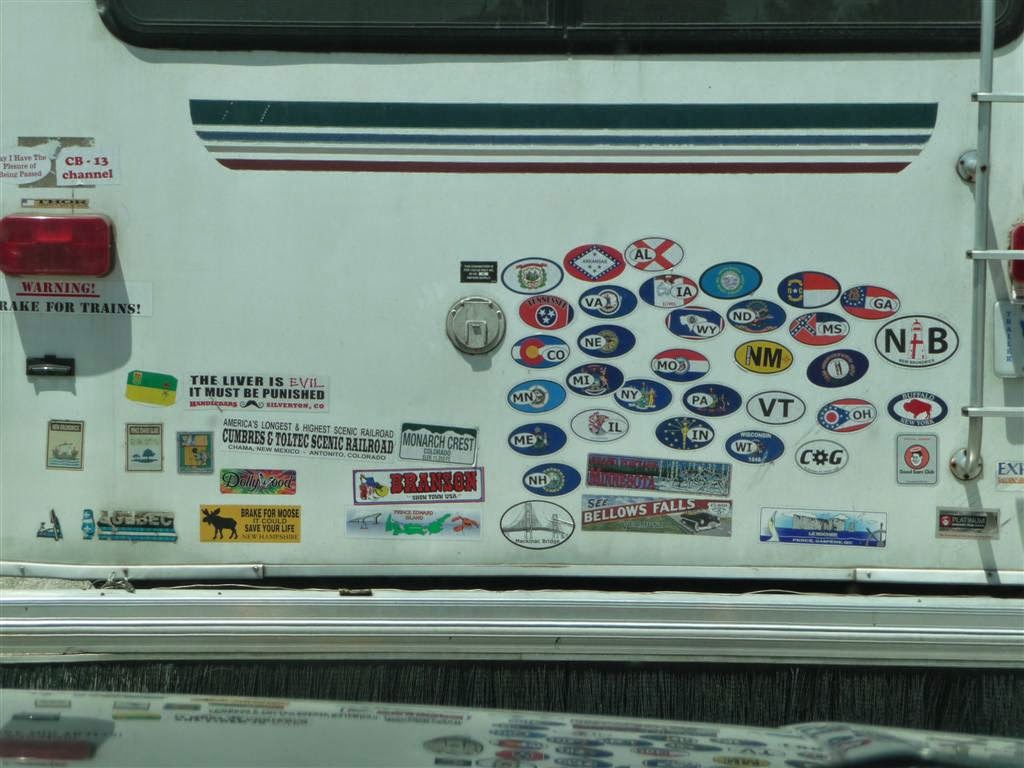 He hasn't been everywhere but he is working on it 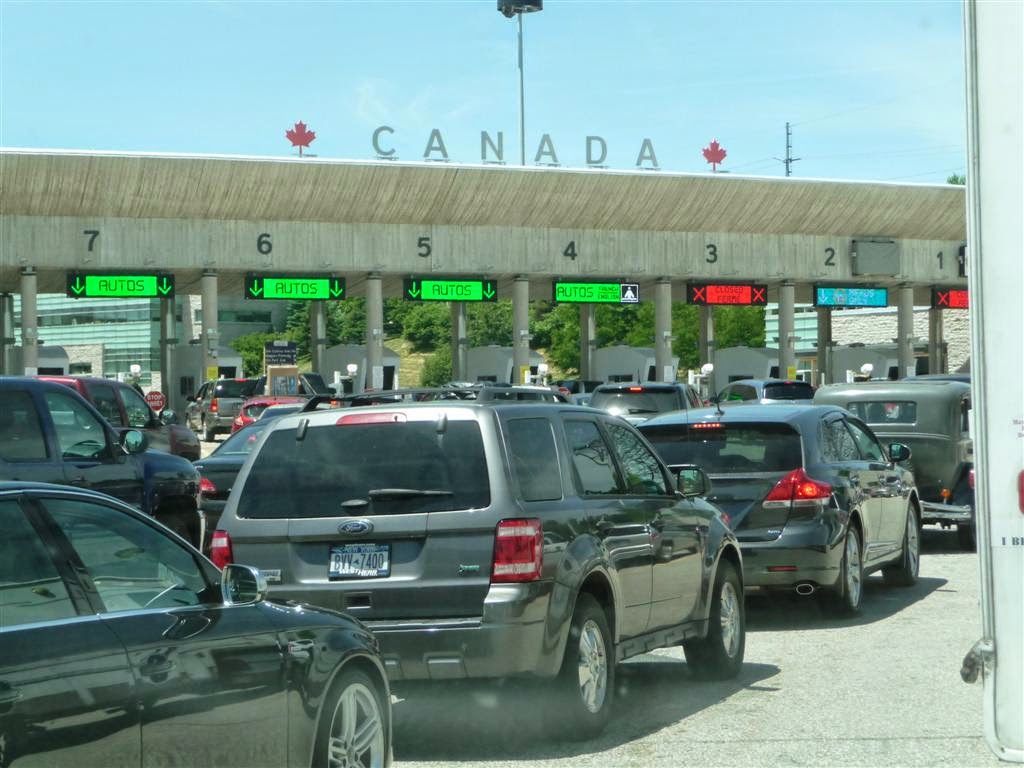 Most booths were open


The CBSA agent asked why we were in the regular lane and I explained. A couple of questions about our purchases and we were on our way. I let the EZ Pass handle the toll and then we waited for Gary and Dianne once we cleared several miles of orange barrels on the QEW. They weren't long catching up to us.

There must have been some kind of vintage car happening in the area. In addition to the pair of Model A's we saw in the Customs plaza, we encountered a few notable examples on the way to Niagara Falls. 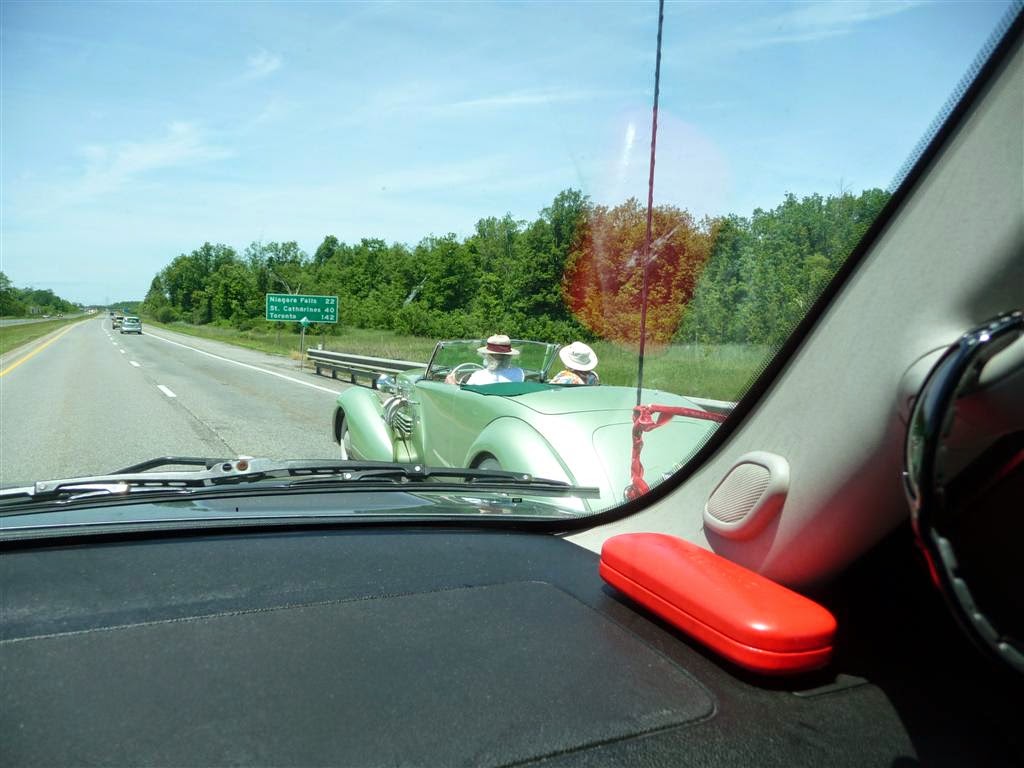 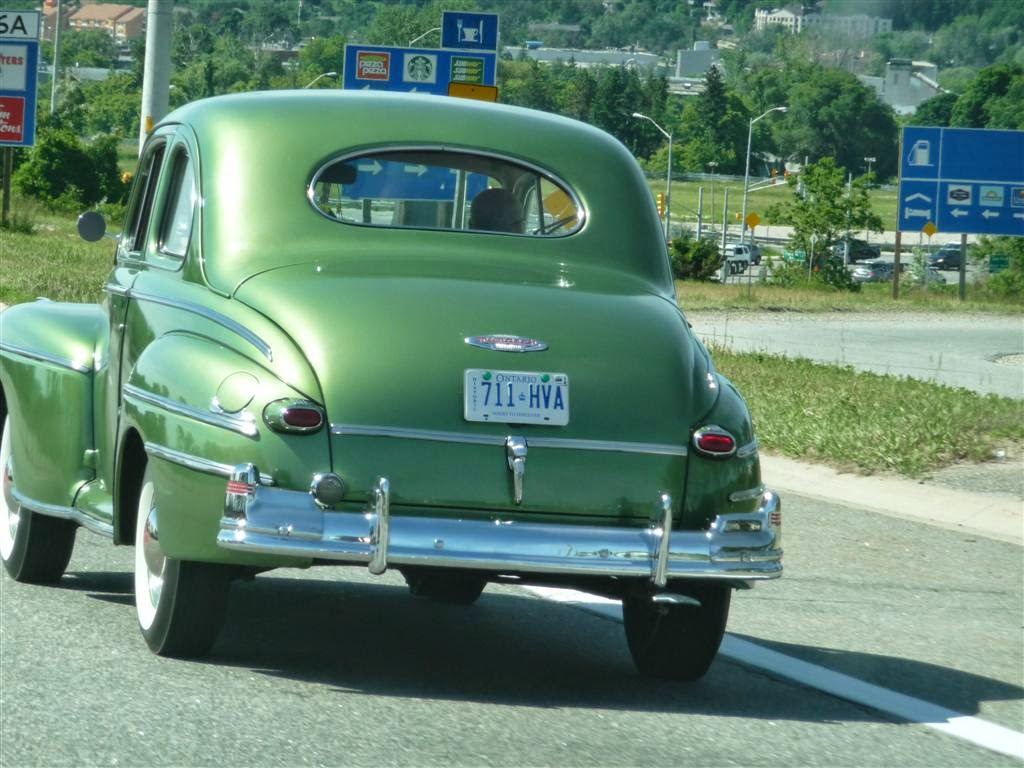 This appeared to be a Mercury Monarch of around 1947 vintage

Once we were through the construction around Niagara Falls, the traffic was moderate going our way. As we approached Grimsby, however, the Niagara bound traffic was heavy enough that it had ground to a halt in a few places. We splurged and caught the 407 Express Toll Route once we were over the Burlington Skyway. The 407 is outrageously expensive, but that is one reason that the traffic is typically light. Today was a typical day.

We cleared the Big Smoke (a not so affectionate name for Toronto) and found ourselves headed north on Highway 400. It was time for another food stop so I pulled into the remodeled service centre near King City. Gary and Dianne followed us but, since they were only going a few miles up the road to Barrie, we said our goodbyes and they continued on without going inside. We have been on the road together for thirteen days and they have proven to be excellent traveling companions. I hope we can do it again sometime.

After getting some Tim Horton's coffee and a wrap to go, we got back on the road for the last 240 miles. I stopped again at the Petro-Can south of Parry Sound, adding enough fuel to be sure we could make it the rest of the way. After almost two weeks of US gas prices, the cost at the Canadian pumps sure hurt.

North of Parry Sound, there was almost no traffic. We cruised along at 100 KPH, with the readout telling me we were getting about 12 miles to a US gallon. Then a semi came by and I tucked in behind, boosting this to over 15 MPG. I could use more big trucks.

We arrived home about 7:45 PM. The temperature was still 24C and we only took in the overnight bags, leaving the rest to be unloaded tomorrow. The house was in good shape except for the back lawn, where the company I had hired to cut the grass had scalped it for some reason. This would bear some looking into.

This has been a great trip. It was a pleasure to take some of our Freedom Riders family around what I consider to be some of the best motorcycle riding roads to be found anywhere. Now we will have some weeks at  home before heading back down to the same place (and even the same motel room) for Wolfman's Wandering Rally 8 at the beginning of August. 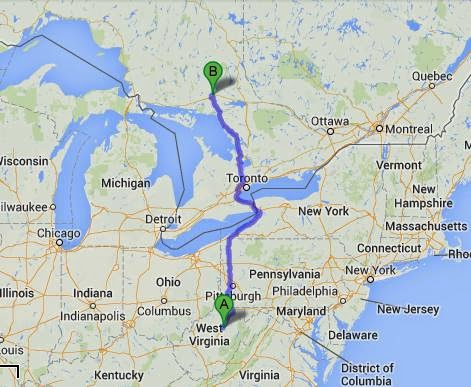