We were up at 7:00 AM. It was still raining so we let Paul and Melika sleep. They had a long day yesterday. The forecast called for the rain to pass by early afternoon, but we know that any forecast in the mountains is only a guess. 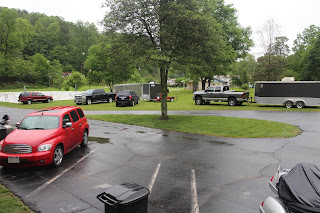 Not the best weather this morning

Paul and Melika eventually stuck their heads out and, during a brief break in the liquid sunshine, Paul unloaded the bikes and then immediately covered them up as it started precipitating again. 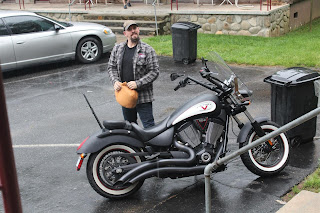 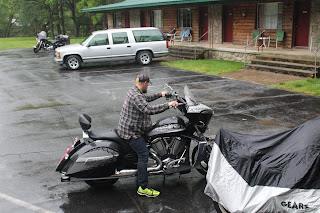 We all climbed in the Equinox and went to the Everett Street Diner in Bryson City for a breakfast that couldn't be beat. Then we took a drive into the Nantahala Gorge to the kayak place for something to do. After that, we headed back to the lodge. The weather folks were still claiming that the rain would end by 1:00 PM. 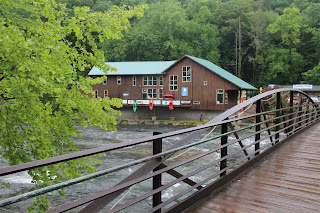 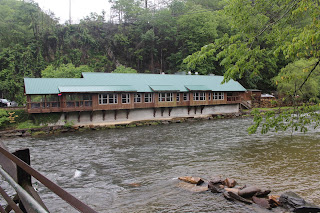 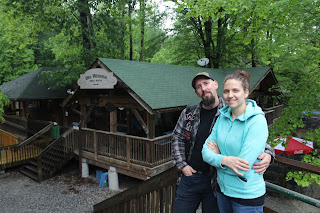 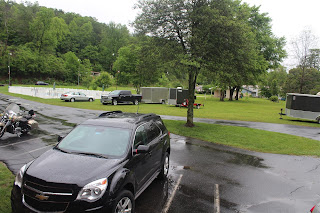 Sure enough, the rain eased around 1:00. We put on the rain suits and set out for Deals Gap with Melika riding behind Paul. We were not bad until we got past Stecoah on NC 28 (The Hellbender), and then it started to rain more heavily. Negotiating the twists and turns on wet asphalt as the rain got progressively harder and visibility declined was not fun. Eventually, just short of the Fontana Dam turnoff, we reversed course and invoked Plan B.

We turned onto NC 143 towards Robbinsville. By the time we got to town, the rain had passed and there was a hint of blue skies. Sandy and I missed lunch at Lynn's Place yesterday but managed to enjoy it today. We each had soup and one trip to the salad bar. Paul and Melika had the famous (for fans of The Ballad Of The Gap) deep fried cheesecake while Sandy had cobbler. Exercising more restraint than I knew I had, I had a black coffee and watched. Our server was a nice young lady with a tattoo on her arm that said "Because Your Mine". 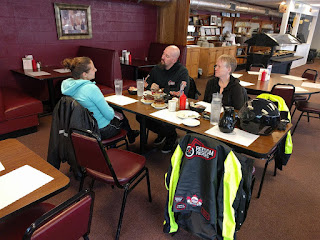 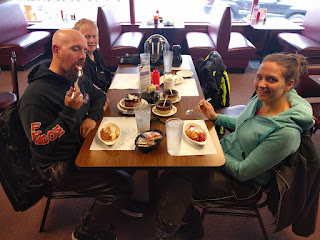 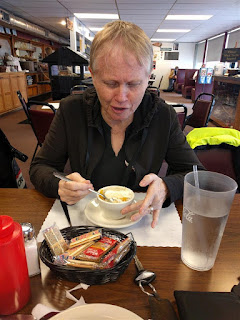 A light rain had moved back in while we were eating, but it was patchy. We were in and out of it as we rode down US 129 to US 19/74 and then followed that back through the Nantahala Gorge and on to Two Rivers. We arrived back at the rooms just after 5:00 PM. 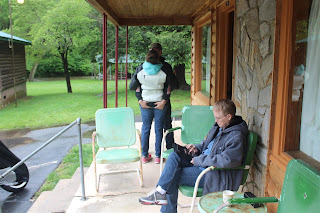 One of the recommended places in Bryson City that we had not patronized up until now was an Italian restaurant on Everett Street called Pasqualino's. Imagine our surprise when we arrived at 7:00 PM on a Tuesday evening and found the place packed. I have no idea where all these folks could have come from, but they looked like they were enjoying themselves. The serving staff was bustling and the boss himself appeared to be watching over every step. Within ten minutes, a table came open and we were seated.

The server was pleasant and competent. Orders were taken as soon as we decided which of the many tasty offerings we were interested in. Sandy ordered chicken Parmesan and I decided on chicken Cordon Bleu. Both came with a side of fettuccine Alfredo and both were excellent. There was enough left over for another meal later on. Paul and Melika decided to share a plate of fettuccine and a calzone. But this wasn't just any calzone, it was a dinosaur sized calzone. The mother of all calzones. They also took a lot back to the room. When the bill came, it was quite reasonable. This was our first time at Pasqualino's but it won't be our last. 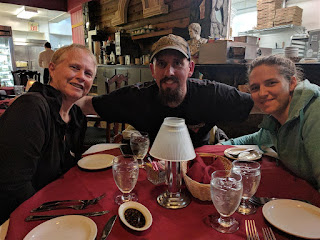 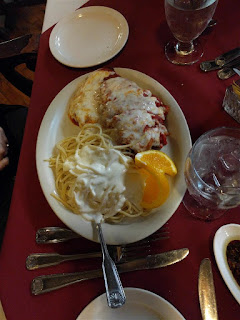 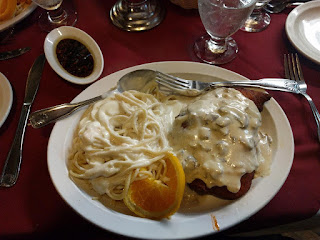 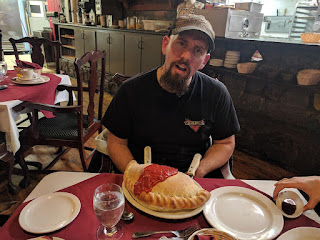 After the large meal, the rest of the evening was anti-climactic. We looked at the weather forecast, still dismal for tomorrow, and then turned in early. 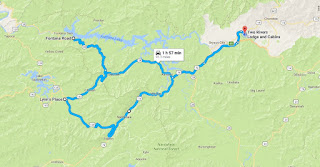