The Vulcan Riders and Owners Club South East Rally (SEVROC) has been going on since the spring of 1999. It was a twice a year thing the first little while and was the first VROC gathering we ever attended. Now it is traditionally the first trip of our summer traveling season and the time was upon us again.

This year, our route to Maggie Valley, North Carolina would take us through Cambridge, where we would look after granddaughters Jolene and Roby tonight, and Woodstock, where granddaughter Fiona would celebrate her first birthday tomorrow.

With the home renovation nearly done, we have been thinning our our possessions. Sandy had set aside some things that she thought daughters Heather and Kim might be interested in, including bags of stuffed animals that might serve as giveaways at Fiona's party. Once our gear was stuffed in the Equinox, these surplus items took up every remaining space. The trailer was connected and the bike, newly started and test ridden after its long winter nap, was loaded without incident before we went to bed last night.. 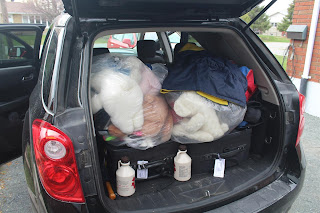 No room left for anything

I usually experience a bit of anxiety before the first trip of the year. Did we forget anything? Will the vehicle have problems? Do I really want to go? This time was no different, but was less severe than usual. We finished loading the last few items, toothbrushes and pills and such, and pulled out of the driveway at 8:40. After a brief stop at McDonald's we were on the road at 9:00 AM.

Traffic was light southbound. The sign at the beginning of the construction zone at the French River where they are working on four-laning Highway 69 now says "Completion in 2020". I remember before 2003 when our Liberal MPP Rick Bartolucci was complaining to Premier Mike Harris that taking ten years to widen this 100 mile stretch was way too long, considering the impact on the economy of the north and the safety of its residents. When Rick's Liberal Party, under the leadership of Lying Dalton McGuinty, took power in that year, they hemmed and hawed and then said the road would be completed by 2017. It is 2017, Rick. Your party is still in power (even though you have stepped down) and the road is only half done. WTF, man??!!! The USA built an Interstate Highway System in a similar period of time!!!! But I digress.... 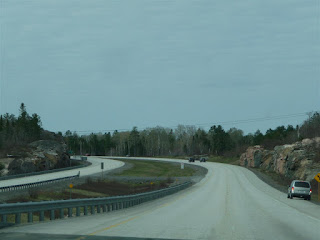 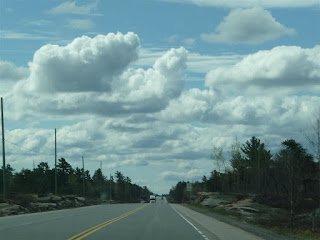 We stopped at the Tim's at Horseshoe Lake Road and then at the On Route Service Centre at Innisfill, where we went in and sat down to eat. Kim called to say they left for Niagara Falls about noon. There family is at the stage where the nicest thing Dad can do for Mom on Mother's Day is to get her away from the kids for a night. I had planned to take the 400 to Highway 401, considering it was still mid-day, but the traffic near Toronto was getting squirrelly so I chickened out and took the 407 Express Toll Road instead. There was a bit of rain on the 401 but that ended before we got to Cambridge. We arrived at Kim and Mike's by 3:00 PM. 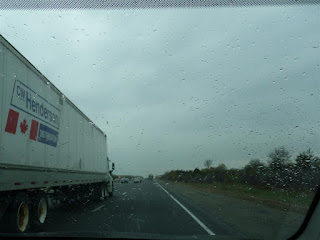 Jolene and Robyn stay in a day care facility at the school after hours. We took Kim's Mazda and picked them up after showing suitable identification. Mike had suggested that they might like to eat at an outdoor food stand called L.A. Frank's. It is located on Water Street in scenic downtown Galt, one of the communities that make up the city of Cambridge. Galt, built along the Grand River, is a stately old community with buildings made of stone.

Frank's is a nice permanent building in Mill Race Park. It offers hot dogs, hamburgers, poutine, pulled pork and more. They also had a good selection of unusual shakes and floats. Jolene had a regular poutine and Robyn had a cheeseburger while Sandy and I had hot dogs. The girls also had a milk shake each. 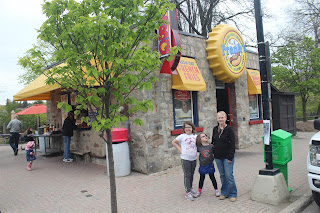 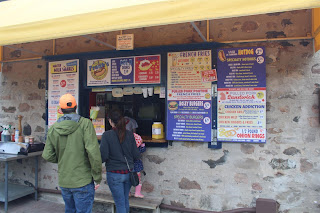 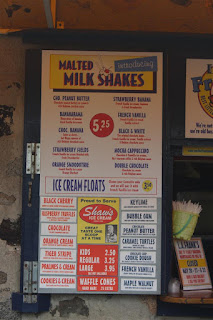 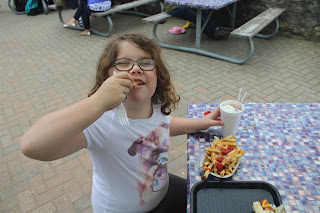 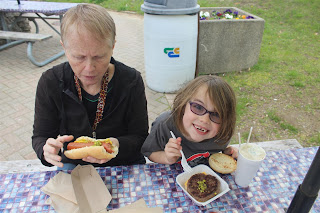 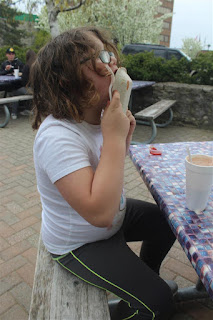 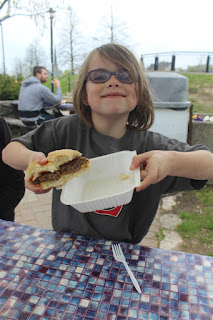 After we finished eating, we decided to take a walk through the small park. As I mentioned, Galt has many old stone buildings and structures. The walkway along the Grand River was no different. 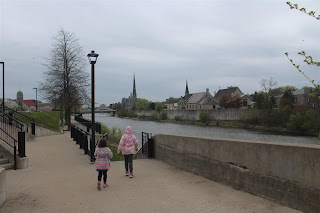 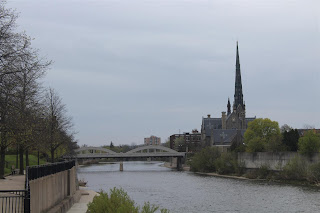 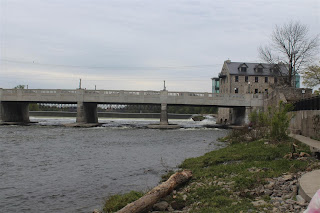 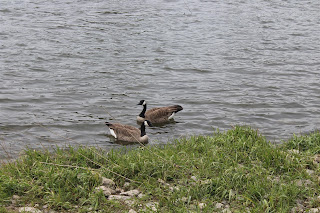 If only we could develop a market for gooseburgers 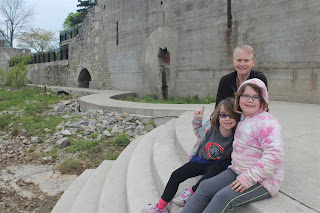 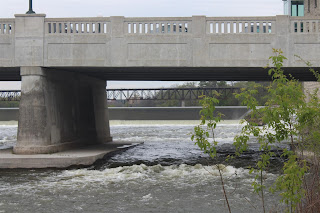 That apparent wall under the railway bridge is flowing water 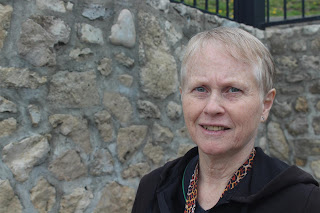 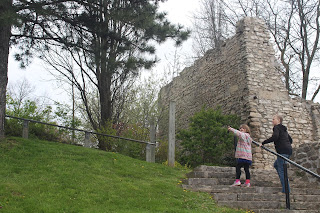 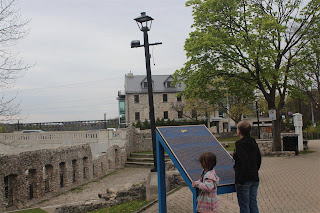 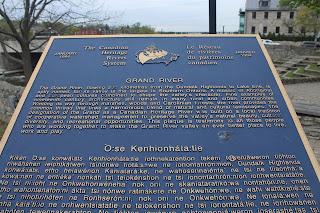 The history of the Grand River 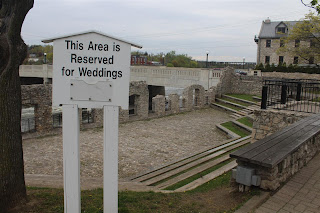 This is a nice touch 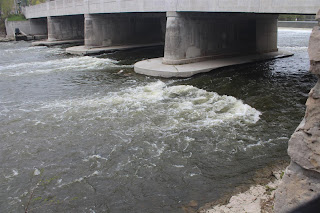 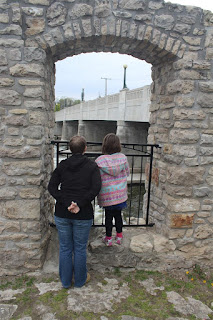 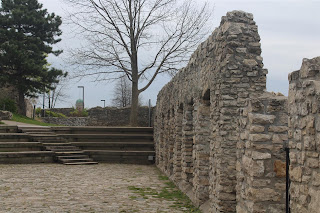 No end of stonework

It started spitting rain so we cut our riverside exploration short and headed back to the house. Sandy gave two Furbies that had belonged to Heather and Kim to the girls when they were up over Easter. They didn't have batteries in them at the time but we found them and some AAA cells on the dining room table. Once electrified, they woke up and began chattering away in their vaguely disturbing manner. 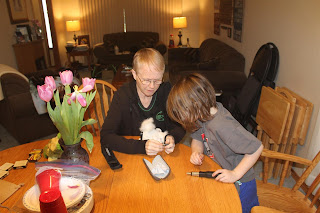 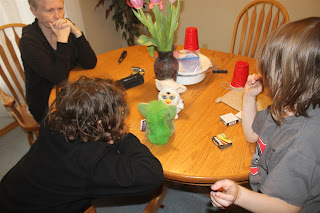 Now they are talking to each other (the Furbies, that is)

We watched a little TV and then the girls got ready for bed. Robyn read to me from a book. I was surprised how well she was doing and wondered if she just read that story a lot. I had her read the credits in the back of the book and found it was more than just by rote. Jolene and I spent time looking through a book of Guinness World Records before we turned all the lights off for the night. Sandy and I turned in soon after. 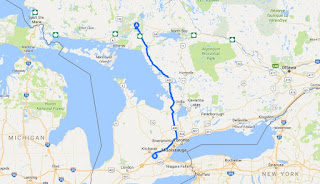