The rain that started at 10:00 last night was still falling when we got up this morning. Many had already pulled out by the time we emerged from our room, but some remained. We said goodbye to Willie Wonka and Butch as the fired up there bikes. The Lovely Carlene chose to ride with Teresa in her pickup truck.

We wandered down to Pop's for breakfast with Phillip and The Godfather. One by one and two by two, the remaining folks pulled on their rain gear, gritted their teeth and set out for home. Eventually, we were the last ones remaining. This was somehow fitting because we were also the first to arrive. With all our bags packed, the final step was to hook up the trailer and load the bike. The rain gods took note of this and increased the deluge just for me. Then we headed out at 10:45 for the long (thirty mile) trek to Bryson City. 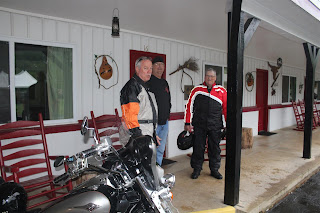 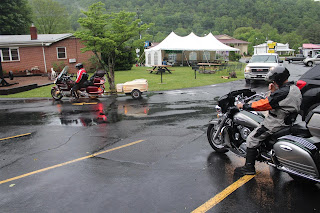 But the ladies are in the pickup truck 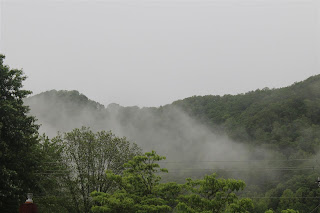 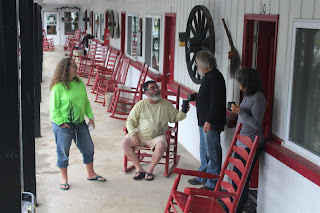 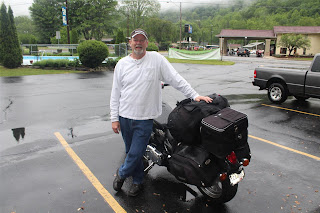 Tbone almost ready to go back to Georgia 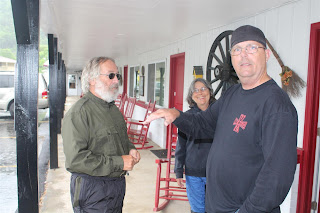 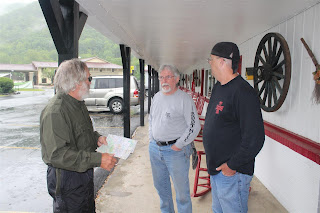 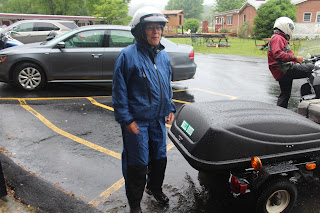 KT splashing in a puddle 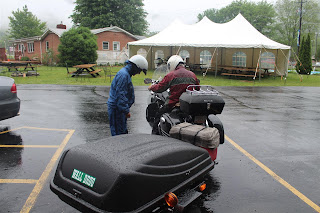 And away they go 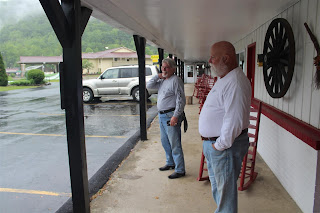 Not many left now 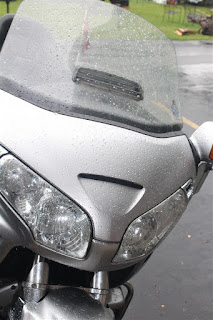 Holy cow, the water is beading First to arrive, last to leave

We made a stop at the WalMart in Waynesville to pick up some snack items. The XM Radio started spitting out weather alerts, specifically flash flood warnings, for this area. This was a feature a feature I never knew I had. Must be an American thing.

Arriving at Two Rivers Lodge near Bryson City, we just parked the Equinox with the trailer connected. Blain gave us the key to our room and we settled in to check out what had been happening on line. The rain stopped at 3:30, precisely as forecast. That was my cue to get the bike out and unhook the trailer and park it in the designated spot on the grass. Note to self. When it has been raining and you drop the rear ramp, any weight on that ramp will cause all the water on the roof to cascade of the rear lip and down the neck of whoever is on the ramp.

A couple from Florida arrived about the same time and backed their Harley's out of their trailer. Then a couple from Wisconsin pulled in driving a Chev HHR and towing a 1500 Nomad on an open trailer. One other couple from North Carolina was here on their HD as well. 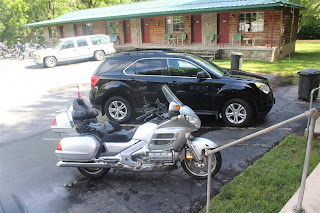 Late afternoon and it is all drying out in Bryson City 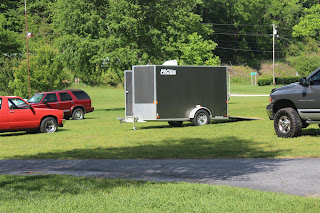 Trailer doors open for drying inside

We drove into Cherokee so Sandy could get a Blizzard at the DQ. Not much else happened for the rest of the day. I had hoped to be able to take a scenic train ride on the Great Smoky Mountains Railroad through the Nantahala Gorge tomorrow. Unfortunately, the spring schedule operates from Tuesday until Saturday. Starting on Memorial Day Weekend, the train runs every day until September. That meant that tomorrow would be the last day for several months that there would be no train ride. Damn!! 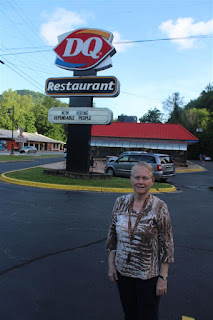 After an evening of visiting with Blain and the other folks, sorting photos and transcribing notes, we turned in early. I read a book on my Kindle for a while before going to sleep. 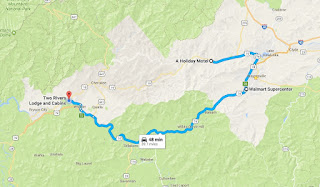