We were up by 6:30 but got a slow start. Instead of the hot breakfast at the hotel, once we were ready to go we opted for breakfast on the road. First, we made a quick stop and Tom and Heather's so I could let them copy the photos I took yesterday at the birthday party. 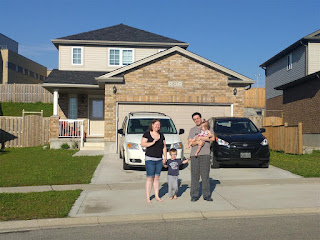 Next, we fueled up and stopped at McDonald's. The kiosk we used had a less than sensitive touch screen and was out of printer paper. I wonder if they are prepared for the issues that will arise as this hardware gets older? To add insult to injury, the young man gave Sandy some kind of carrot muffin instead of the cranberry/orange that she likes so much. We were ten miles down Highway 403 before we noticed.

The drive to Hamilton and then on the QEW to Fort Erie was uneventful. 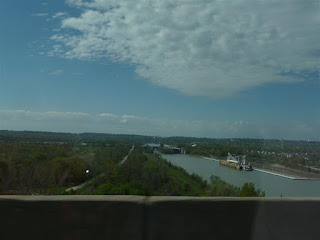 We stopped at the last Mickey D's to use the bathroom because I never hit the Customs without draining everything. If they ever refer you to secondary, it does not look good to ask to use the facilities.

The Peace Bridge has one lane out of service. With just one lane each way, I may reconsider this as our primary border crossing until the work is done. It was not a problem today as we found no waiting when we crossed over. The agent took our Nexus cards, asked our citizenship, destination and duration. I told him we had nothing to declare. Then he asked if the trailer was unlocked. I said yes and he went and looked in it himself. Usually, if they are going to look, they ask me to open it. In any case, two minutes and we were on our way. 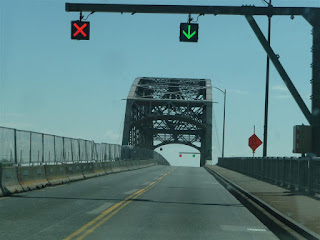 Peace Bridge (Buffalo) only one lane each way 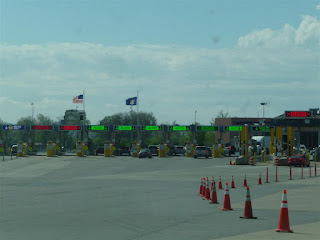 But no waiting for US Customs

Again, the drive along the NY Thruway was nothing special except for the brisk headwind. I was dozing off by the time we reached the Pennsylvania line. We made a stop at the Travel Center of America for fuel and another at WalMart in Erie for a few necessities. Traffic was crazy so I hereby resolved to stop at the Wally World down I-79 in Edinboro in the future. 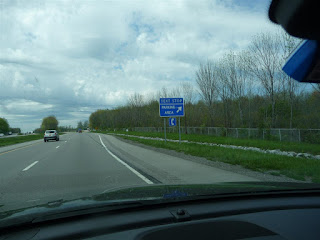 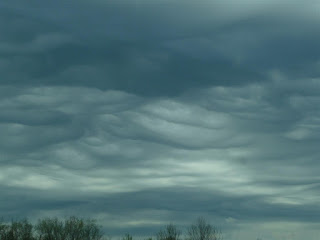 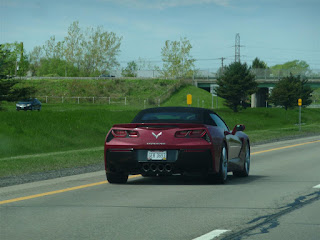 Another way to travel 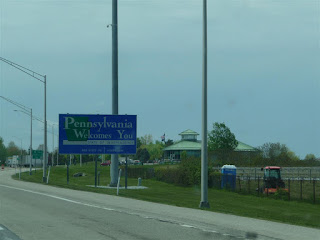 Pennsylvania likes to style itself as the Keystone State but a drive along any highway and you should agree that the Dead Deer State would be more appropriate. The temperature was up to 72F as we cleared Pittsburgh. The stretch where I-70 and I-79 share the right of way through Washington, Pa, is STILL under construction after all these years. 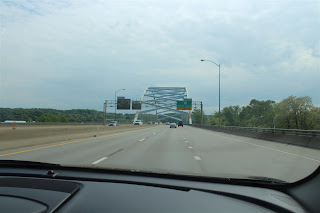 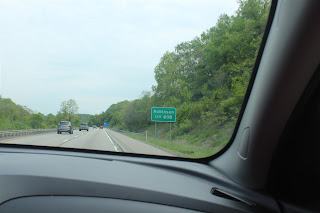 I could feel at home here 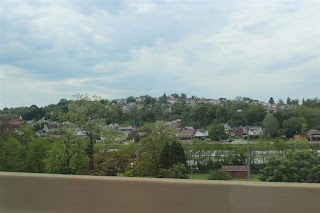 The hills of Canonsburg 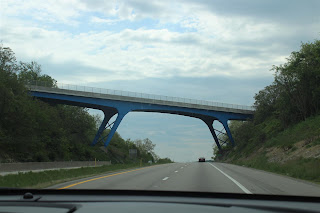 Now that is an overpass 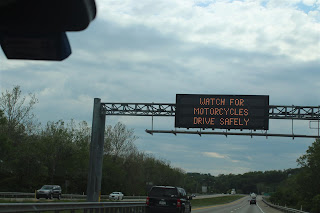 We appreciate the thought.... 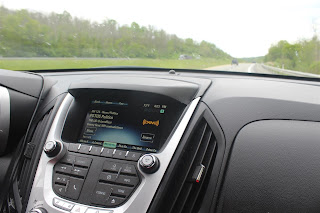 Yes, it is warm

Near the West Virginia border, we were passed by a group of motorcycles and several vehicles towing enclosed trailers. The patches marked them as Teamsters. We stopped at the West Virginia Welcome Center where Sandy slipped on a high curb and twisted her ankle when we were ferrying our motorhome south in the fall of 2010. 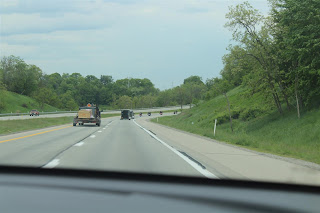 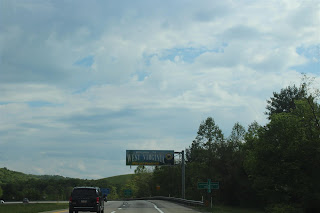 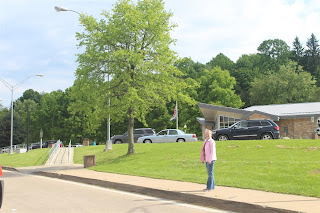 Sandy twisted her ankle here in 2011 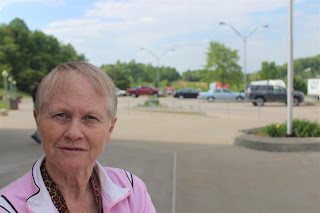 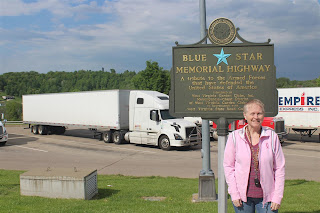 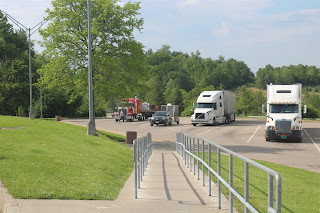 We arrived at the Microtel in Fairmont, West Virginia at 4:50 PM. This was an odd location. New hotels and many restaurants but nary a residential building. They have been leveling the ground by digging up a hill and filling in the low spaces. They had a restaurant called Colasessano's that Wrong Turn said has the best pizza rolls in the state. We were right next to it but it was closed on Sunday. We walked to Bob Evans instead but had to wait for a table because we forgot it was Mother's Day. 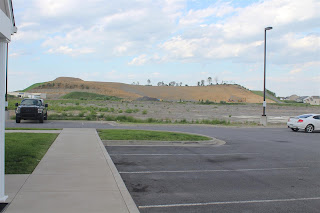 They are removing a hill in Fairmont West Virginia 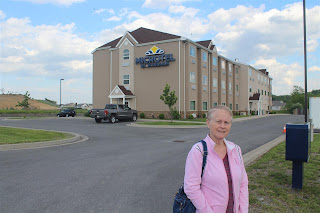 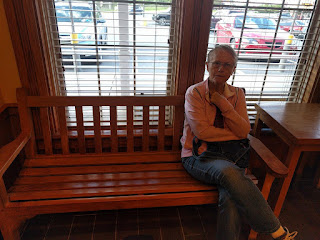 Waiting for a table at Bob Evans (Mother's Day) 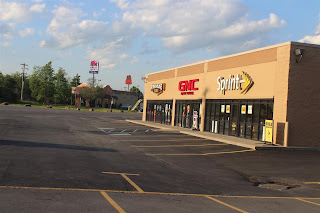 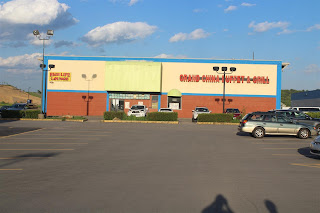 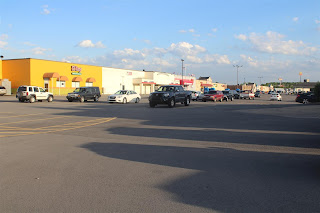 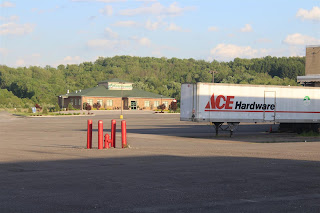 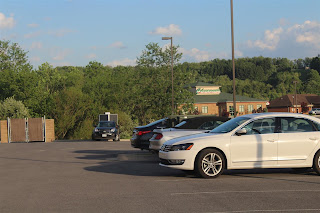 We parked this close but they are closed on Sunday

Sandy watched a bit of TV while I sorted photos and recorded receipts. Then we turned in early in anticipation of finishing the home stretch tomorrow. 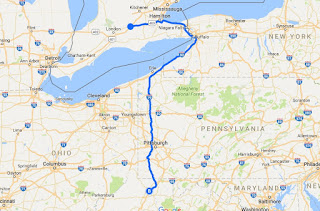