We didn't get out to breakfast until 9:00 AM this morning. It was a fine day to sleep in since we didn't have anywhere to be. Bob from Ohio took his BMW out to explore some roads but said he would be back for another night. 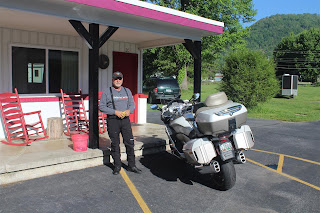 Bob from Wooster Ohio (not a VROC member)

Pop's Place  has really got its act together. They are open from 7:00 AM until 2:00 PM every day. Pops said if he could find more quality help, he would do supper too. It was busy when we got there, but we managed to find a table. I had a three meat omelette that Pops cooked to perfection. Tbone texted and said he would probably be over before long. 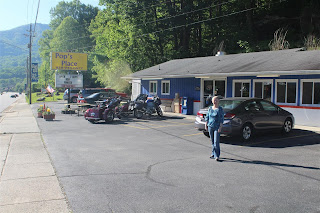 The WiFi was working better this morning, so I sorted and posted some photos. Even though I may fall behind on the commentary, at gatherings I try to get the pictures up with captions so that people who can't make it can stay current with what is happening. As I was plugging away, Bass Man arrived on his Kawasaki Versys, so I took a break to catch up with him. Tbone rolled in soon after, as did Lonnie (on a new to him GL1800) and Rick. Mas Tequila (who I did not recognize since he had lost so much weight) arrived towing his Nomad. 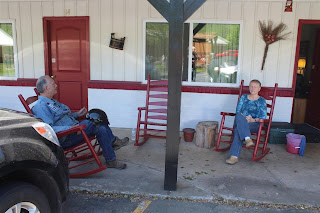 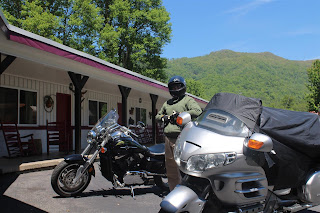 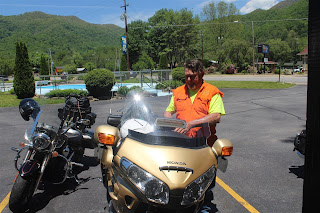 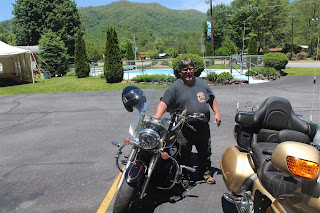 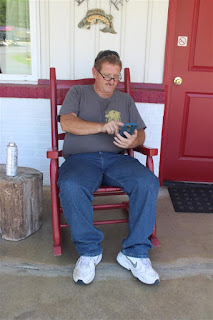 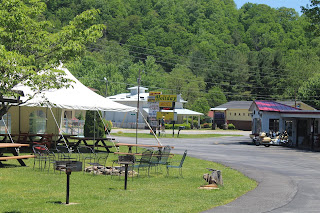 We sat and chatted for a bit and then I suggested that we ride over to Cherokee on US 19 and have something at the Dairy Queen. Tbone said it sounded good and MT thought he might come along as well. The ride over US 19 is always a great way to warm up for the mountain riding. Sandy had a blizzard while I had a mushroom/Swiss burger. 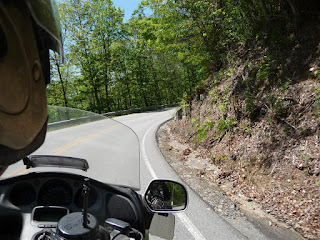 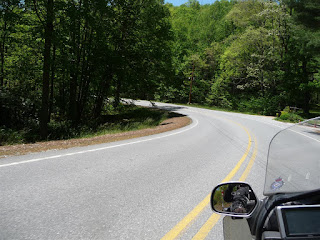 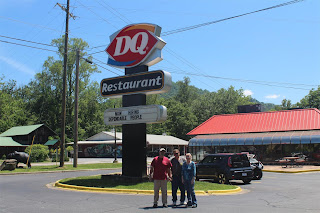 After DQ, Tracy decided to head back to Cheap B's down near Franklin where he had been staying. He said he was moving into Maggie Valley on Thursday. MT decided to do some shopping in Cherokee, so it was just Sandy and I for the return trip. We came back via the Blue Ridge Parkway to Soco Gap and down to the motel. 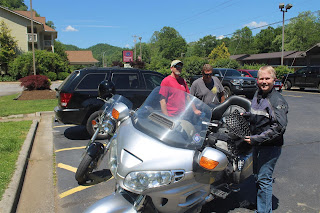 Going our separate ways in Cherokee

Billy Bob and Linda had arrived in their brand new Subaru while we were away. Bob left his Voyager at home this trip. 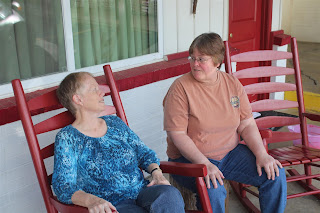 Billy Bob and Linda have arrived 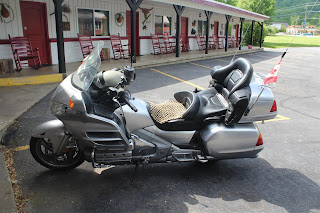 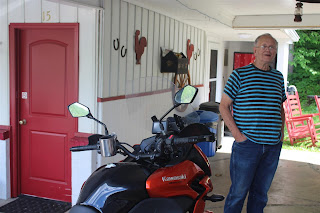 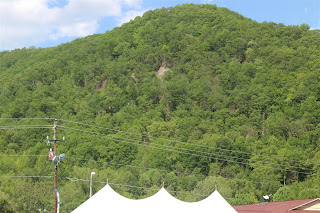 No goats on the mountain yet

We made a quick run over to the Walmart in Waynesville to get more water and some snack things. I also checked at the ABC (Alcoholic Beverage Control) store to see if they had any Eagle Rare bourbon. The answer was the same as I got yesterday in Maggie Valley. Eagle Rare, Buffalo Trace and Blanton's are allocated. The stores do not get many bottles and they are gone as soon as they arrive. Next time, I will bring my own.

About 5:20, we started to think about supper. I suggested the Sagebrush, a chain steakhouse, in Waynesville. Sandy and I climbed into the shiny new Subaru with Linda and Billy Bob while Bass Man followed on the Versys.

The food was good and reasonably priced. I had something called rodeo chicken. That was two large chicken breasts covered in melted cheese, mushrooms, bacon and chopped green onions. I had slaw and broccoli as sides, trying to be as good as I could about the diet. It was excellent. Sandy had the mother of all blackberry cobblers, so big she could not finish it. The only issue was our server, who had been outstanding up to then but got sidetracked when it came time to pick up our bills. It is frustrating to be done and ready to leave but not be able to settle the account. Still, it was a positive experience over all. Supper at The Sagebrush Steakhouse in Waynesville NC 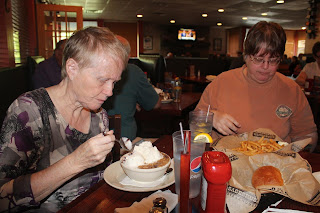 That is one humongous cobbler 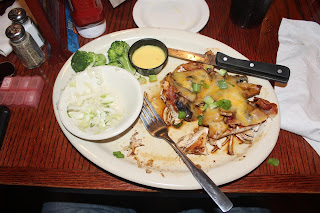 Back at the ranch, Wrong Turn and KT had arrived on their Nomad. That rounded out the VROC contingent for the night. 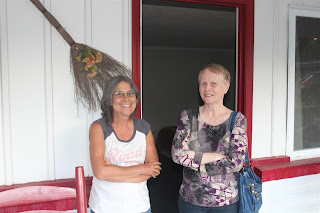 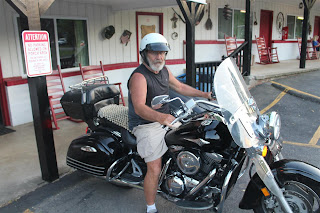 Wrong Turn heading for the store

Bob from Ohio on the BMW got back. He rode 300 miles today, getting as far as the Devil's Whip. It sounded like he had a great day. I returned to the room and loaded more pictures, writing an IOU to the narrative. Than I called Phillip about riding to meet him tomorrow on his way in from Kentucky. We decided that Hot Springs, NC was a good spot and set the time for 1:00 PM. He would be coming alone since his better half, Jaime, got a promotion and couldn't get away. Young Caleb would be staying home with Mom.

After the call, I took my Kindle and crawled into bed. Sandy was already there. 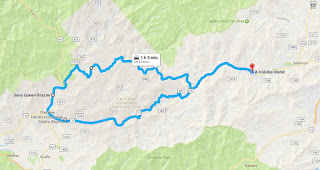