It was another cool clear New England morning. The room rate included a full breakfast so we headed for the dining room where we shared a table with Charlie and Nancy and I enjoyed French toast and bacon.

Ron had set up what he referred to as a Four Notch Ride and all the bikes got ready to leave about 9:00 AM. I had been looking forward to this but decided not to go because I didn't want to place any additional strain on the ailing front end. After the group headed out, Sandy and I took a nap before going exploring.

We walked up the street, lined with big houses that had been built in the first half of the 19th Century and were now converted into bed and breakfasts, restaurants, galleries and other types of business. We stopped for lunch at Isabella's Cafe where we had coffee and Sandy enjoyed a large muffin. I had a BLT sandwich on homemade bread. Afterwards, we walked back to the Sudbury Inn, stopping to take some photos of flowers. 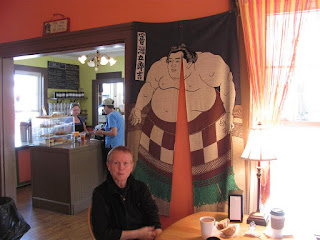 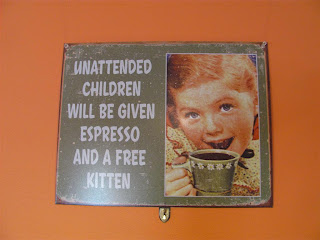 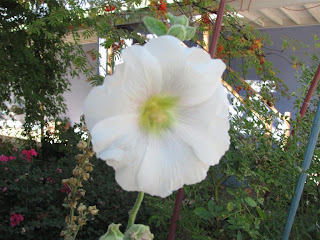 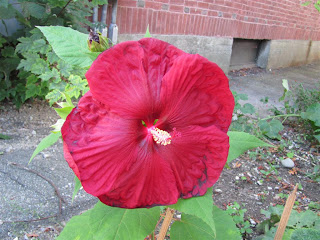 Another flower in Bethel
The riders returned by 3:00 and Lost Bob and Lorie arrived soon after. We checked out Brad and Judy's huge suite on the back side of the 3rd floor and then hung out in the lobby until it was time to be seated for our formal 6:30 supper in the dining room. Sandy and I each had veal scallopini. I also had a fine New England clam chowder to start and finished with a cheesecake. Once again, I ate too much.

As we were eating and discussing getting back to Ontario to get the fork fixed and then continuing on to Arkansas, I could see from the look on Sandy's face that she was not as excited about the second week on the road. I suggested that maybe we were a little burnt out and wondered if maybe we should skip Arkansas and go home. She looked relieved as she told me that maybe that might be a good idea. And so our plans changed.

After supper, we hung out in the lobby with some of the others, telling jokes and swapping tales, until we packed it in and headed to the room about 10:00.
Posted by Jim "Skid" Robinson on 9/11/2010