Every Labour Day for thirty years, Cyclefest happened in the Kitchener/Waterloo area of Ontario. It was held for years at the Chicopee Ski Club and organized by the Waterloo County Touring Club. In 1998, the rally moved to the West Montrose Trailer Park near Elmira and the WCTC gave way to the Waterloo Wings as hosts. Sandy and I have attended 29 out of 30 years. But 2009 was not only the 30th Cyclefest, it was the last. After three decades, we wondered what we would do on this weekend?

No problem. Some of the Waterloo Wings and Christian Motorcycle Association who had worked on previous Cyclefests decided to have an informal camping weekend in the same location and invited some of their friends, us included.

This morning was partly cloudy and cooler than the heat wave we had a few days ago. After packing and getting the trailer hooked up, we hit the road before 10:00 AM. We were stopped again on the Southeast Bypass, but this time it was because they were ripping the asphalt in preparation for what is expected to be a one year repaving project. I guess we'll be avoiding the bypass for the foreseeable future.

Things started out well but, south of Alban, the clouds started getting heavier. I had to contend with one of the serious GL1800 problems as my Butler mug leaked and left coffee stains on the faux gas tank.

We stopped at McDonald's in Parry Sound for lunch. The young kid on the cash I lined up at managed to get through four orders in 25 minutes, indicating he needs some coaching. On the plus side, the clouds had given way to blue sky by the time we got back outside. It clouded over again and more blue sky caught us when we stopped at Waubaushene for fuel.

Continuing south, we went through Barrie and got off the 400 at what used to be Highway 88 before Mike Harris screwed up the Ontario highway system. From there, we headed due west to the village of Hockley where we stopped one more time at the Hockley General Store. These hourly stops are making us take a kinder, gentler pace. 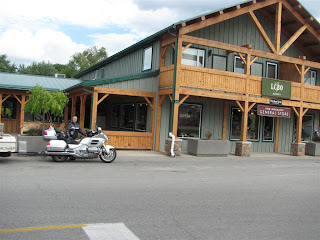 The Hockley General Store
Instead of continuing through the Hockley Valley, we were headed for Cambridge so we went south on Airport Road to what used to be Highway 24. From here, the sky started to look a little more ominous. 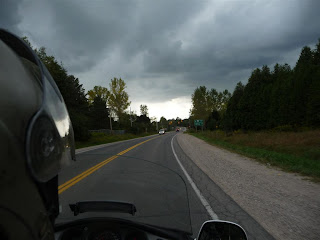 Clouds on Highway 24
As we neared Guelph, we could see a big cloud north of us that appeared to be working its way into our path. I would have given my eye teeth for a NEXRAD equipped GPS but the service isn't available in Canada. At Ospringe, I cut south to Wellington 50 and, with ugly weather north and south of us, we punched through a narrow spot as we entered Guelph, only catching about five miles of rain. Unfortunately, it was where we had to stop for traffic lights so we got a little wetter than we would have liked. Leaving Guelph, things improved ahead but it looked like the area north of us was getting hammered. 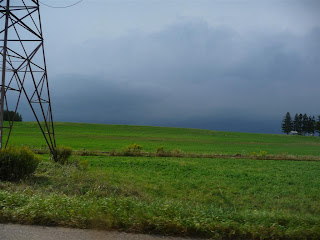 Serious black clouds north of Guelph
We were booked in at the Comfort Inn in Cambridge because Kim & Mike are getting their bedrooms rearranged in expectation of the new baby in October and Heather & Tom are staying at his mother's place while they are between homes. We made it in, got unloaded and covered the bike a few minutes before the next storm hit. 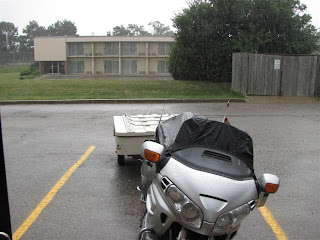 Rain pouring down in Cambridge 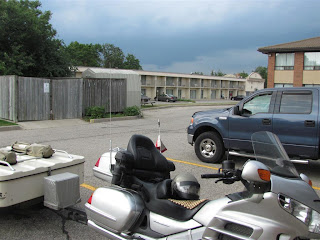 View from our window
Mike was painting Jolene's new bedroom so Kim and Jolene came and got us in their van and we went to Kelsey's for supper. Jolene was happy all the way through the meal. 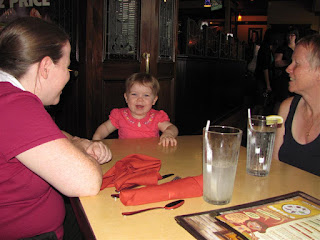 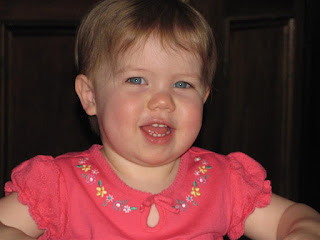 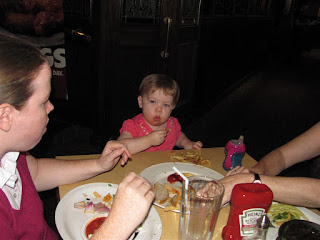 Chowing down on grilled cheese sandwich and fries
After supper, as Kim was strapping Jolene into her car seat, the skies opened up again. If I was on the bike, I would have been seeking cover because this was intense. We went back to Kim & Mike's and visited for a while. They loaned us the van to return to the hotel and we promised to have it back to them tomorrow.

As usual, we turned in early.