Last night, the forecast called for rain ending about 4:00 AM. We were supposed to have an overcast but dry day for traveling today. By this morning, the weatherman (who gets paid way too much for someone who is wrong that often) had revised the forecast and promised us rain all day.

Yesterday, a number of things on my To Do list didn't get done. The grass didn't get mowed and the Freedom Riders won't have a Treasurer's Report for the meeting this weekend. But I did get a lot of the blog caught up and I finally registered the new GPS and downloaded the latest maps.

This morning, we went through the organized confusion of packing once again. I have a system where, for the last day, every time I thought of something I should take I would get it and put it in one pile. This morning, everything was put in its appointed place until nothing was left in the pile. Then it was time to load and go.

We were loaded and dressed by 8:45. It started drizzling just as I pulled the bike out of the garage, so on went the rain suits again. After fueling, we were on or way before 9:00 AM.

We had light rain off and on as we rode east. I had time to dwell on one of my pet peeves, particularly on a grey day like this. I can't abide car drivers I meet who travel in the day time with their high beams on. Those lights can be obnoxious so anyone doing that gets the benefit of all four of my quartz halogen GoldWing bulbs.

After a quick stop at Tim's in North Bay, we continued east on highway 17. For once, we had a tail wind and it looked from the gauge like we were getting exceptional mileage. We stopped again for Sandy's four minute walk at a picnic area east of Mattawa. Two construction zones, one near Deux Rivieres and the other just before Deep River,consisted of orange barrels and 70 KPH for 15 kms each.

We stopped for lunch at Tim's in Deep River. Soup and sandwich did the trick but I was eyeing the new Coldstone Creamery ice cream. It looks different. The vanilla looks like mashed potatoes. On some warmer day, I'm going to have to try it. A Harley rider we have been leap-frogging with since Sudbury stopped as well. He was headed home to Ottawa after visiting Sturgis South Dakota and a friend in Manitoba. Severe rain kept him pinned down in Spanish for two days, a less than stimulating experience, and he was eager to get out of the saddle for a while.

I note that the closer I get to the National Capital Region, the dumber the drivers seem to become. We encountered quite a few more construction zones on Highways 17 and 417. On our way through Ottawa, the grey clouds gave way to high overcast and some sunshine.

Once we turned south on 138 towards Cornwall, however, we found ourselves aimed directly at a black cloud. Before long, the rain started again and eventually degenerated into a heavy downpour which continued as we arrived in Cornwall. Although the sky originally looked blue south of the border, the dark cloud moved south and removed any hope of getting out from under the rain. 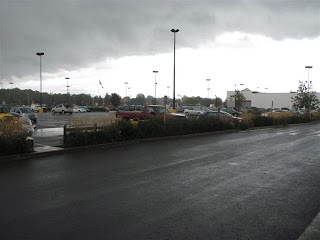 Rain in Cornwall Ontario
The border guy pulled me into secondary saying it was policy and he had no choice. It must be a local policy along the St Laurence because Buffalo, Sarnia and the Soo don't do this. I filled out a written declaration and the nice fellow behind the wet counter (I dripped on it) had us underway without much delay.

It continued to rain the short way to Massena where we stayed in the same Super 8 where we connected with Brother Bear and Brad back in July. I was dry under my suit but Sandy, who had been sitting in a puddle that collected in her seat, had a wet butt. I ordered delivery from Domino's and we ate while I caught up the last of the overdue blogs. I thought the rain had ended but, when I went out to dry the bike off about 7:45, I found another deluge had sprung up out of nowhere.

Tomorrow, we will continue on to Pembroke in southern New Hampshire where we will stay with Ol' Phart Joe and Karen before heading on up to Bethel Maine on Friday. The forecast for the next 24 hours is (you guessed it) RAIN!!!