Hurricane Earl, the source of our weather problems yesterday, continued to plague us today. A squall line caught between Earl and a low centred over western Lake Superior stretched from southeast to northeast and had severe storms sliding along its length. The line itself was moving east but very slowly. As a result, wave after wave of rain kept finding us. 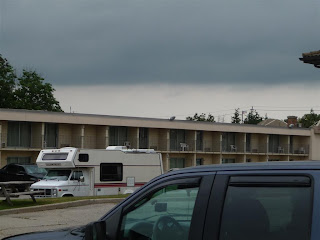 Looking out our window this morning looks just like yesterday
We ate the hotel continental breakfast and took advantage of the 11:00 checkout time while I caught up on notes and overdue blog entries. It was frustrating to watch the rain just keep coming.

About 10:30, the radar showed a brief but clear gap in the rain between the hotel and Kim & Mike's before the main squall line moved through. We took advantage of it, with Sandy driving their van. Mike was home this morning waiting for Jolene's new 'big girl' bed to be delivered.

When we were safely in the house, the heavy rain hit and the main storm line moved through. At noon, Mike went to work and we waited for the bed until Kim got home. Then Heather called and wanted to take the afternoon off but had no one to come and get her. I took Kim's car and picked her up in Ayr. The rain was done for now and there were even some spots of blue sky showing.

By the time we got back to the house, the bed had arrived. We visited for a while and then rode over to the West Montrose Trailer Park, the former home of Cyclefest. Checking in at the front gate,, the lady who owns the place said she would lead us down to the field on her bicycle to guide us around the muddy spots.

What is good ground for a bicycle may not be for a 900 pound motorcycle with a trailer attached. The entry road to the field was very muddy so she led me onto the grass to the right. Unfortunately, the wet grass was slicker than the mud and, as it started to slip and I gave it some more gas, the rear wheel spun sideways and down we went.

The good thing about going down in slop is that it doesn't hurt anything. The leather strip holding the gremlin bell on broke but that was it. I used the special bike pickup technique to get the Wing back upright and we went over to greet the friends already hear, who hadn't seen the grand entrance to to strategic placement of a large trailer and sizable communal tent (once a portable car port).

We set up on high ground. The rain was over but the wind out of the west was quite strong. Some people had set up a tent and were serving hot dogs, sausage, burgers and chicken on a bun. Sandy had a burger (two patties) and I had a tasty sausage on a bun. This was supper. We sat around a campfire and visited and, you guessed it, were in bed by 10:00.