It was 7:15 AM when we pulled out of Augusta and caught I-20 towards Atlanta. I picked the pace up to 60 MPH. As Wrong Turn said, sometimes getting there sooner is more important than saving on fuel.

We stopped about 30 miles out at a McDonald's in Thomson Georgia for breakfast and a WiFi fix. I posted two days of blogs that I wrote last night. It took a while because of all the photos I needed to upload.

Before leaving Thomson, we stopped a a Raceway for fuel. To pay at the pump, it asked for a Zip Code so I sent Leo in with my card. Unfortunately, my first attempt hung the pump up and it wouldn't release until I gave it a bogus Zip. The mileage was 8.3 US (10.0 Cdn), poor for 55 MPH. I think the stop and go driving along the coast chewed up a lot of gas. The girl at the counter's parents live in Brampton. Small world (skip the song).

Further on, we stopped at a Pilot/Denny's with free WiFi because I forgot to check my drivers for the NASCAR pool. After looking at the qualifying, I stuck with the four I had already picked. 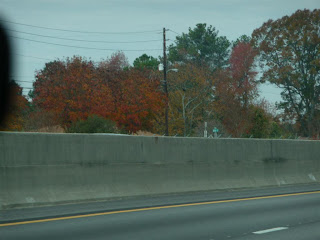 Coloured leaves along I-20
We did note that on I-20 to Atlanta and I-75 north of there had nothing in the way of Rest Areas. That was unusual. We stopped eventually and went a few miles to a brand new and totally deserted Tourist Info place. They had one unlocked bathroom which got used. Leo and I noticed fluid dripping from under the right front suspension area. Close testing determined it was water, probably dripping from the A/C.

Now that we were off I-75, I opted not to go up to Chattanooga and back down via Interstate. Instead, I started cross country. Shorter distance, same estimated time.

We stopped near Rome, Georgia for a Subway lunch, which we ate on the go. Then we crossed into Alabama. I can tell you Alabama 35 sucks. It looks like nice smooth road but is quite rough. I remember the first day out, we searched for all the rattles. Now, on Day 7, we don't notice them unless a new sound crops up.

The big hill down into Fort Payne was interesting.  Thinking of Chapin's 30,000 Pounds of Bananas, I shifted to a lower gear at the top. Good thing because, several miles later, the hill terminated with a 15 MPH corner. Failure to negotiate the turn would result in a collision with a substantial looking stone wall. 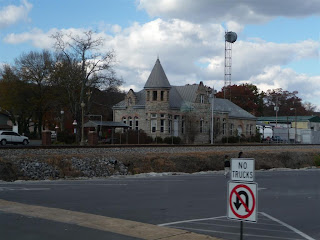 Then we continued west across Alabama 35.  As we approached Scottsboro, we again descended a substantial hill down to Lake Guntersville. 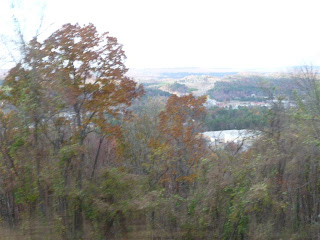 Looking down from the big hill to Scottsboro 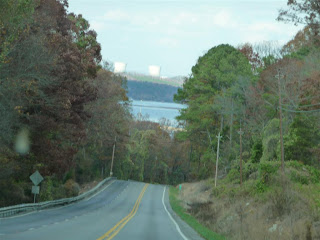 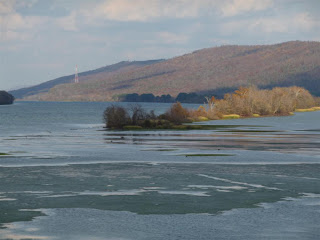 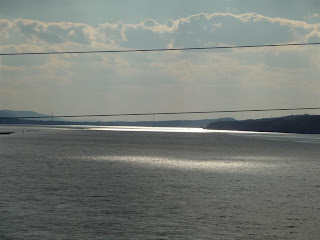 Clouds over Lake Guntersville
Reaching Scottsboro, we went to CW's Pitstop, Carwash and Laundry. The RV wouldn't fit in the carwash but we did laundry so the clothes we'll be leaving down here are clean. One load of washing and three ten minute cycles in the dryer only cost $2.25. Then we headed to the WalMart Supercenter and parked. It seems that the trucks in Alabama shut down when they stop. Maybe (hopefully) they have a law like Pennsylvania because trucks idling all night are a pain in the ass.

I briefly hit someone's marginally unsecured Linksys router, enough to see that Joey Logano finished 39th, but lost the signal before I found how I did overall or who won the Sprint Cup Championship. I think I may explore the possibility of getting a US Air Card for wireless Internet for our further travels.

We walked a few feet and bought Papa John's pizzas. Strangely, because it was an NFL game day, a large three topping cost less than a small three topping. 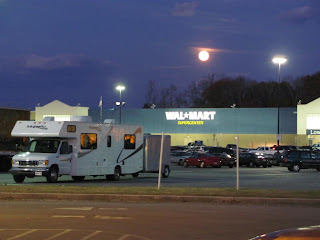 Full moon over WalMart
We're now in the Central Time Zone and the Unclaimed Baggage shop is nearby, so it will be a slow morning. Then we need to haul 169 miles to Donna's, stopping at a Flying J on the way to dump the holding tanks. After securing the RV and bike, it will be back to the hotel in Birmingham before we sleep again.

I did notice that some of the caulk behind the front passenger door has a small crack in it. The driver's side was recaulked before we picked up the unit and is holding. Maintenance and more maintenance, it looks like. I have a lot to learn but we're having fun.