We woke up in the WalMart parking lot and found a few new neighbors. A large Class A pusher with a toad (car towed behind) and a huge fifth wheel had moved in overnight. I found the house battery worn way down below what I would have expected. It might need replacing. The generator also ran rough, surging. It could be gunked up as well. Camping World will have the solution.

The fuel mileage yesterday to Buffalo was only 7.8 miles per US gallon (9.4 Cdn). We''ll play with the speeds today and see what we can manage. Leo and I checked the tire pressures and found them spot on. Then we went into WalMart looking for some 20 Amp mini-fuses. Believe it or not, they were out. We made breakfast and coffee in the RV.

Rolling by 8:00, I almost took the I-79 North exit by mistake but caught myself just in time. Don't know why since I have only taken this exit a hundred times or so. Then we were southbound as we should be. At a rest area 60 miles south of Erie, Sandy tripped on a curb and fell. She's all right but will have a few bruises and has been sentenced to a course in remedial walking. We stopped again south of Cannonsburg, Pa after going around Pittsburgh. 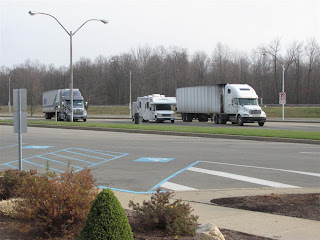 Parking with the big trucks 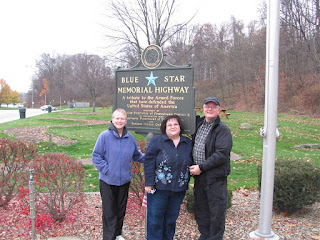 The Blue Star Memorial Highway
South of Cannonsburg, it started to rain pretty heavily. I cut the speed back from 62 to 55 to see what it would do to the fuel economy. I tried to stop at the Mickey D's in Waynesburg to post the blogs and get the mail but there was no room to park. Then I missed the Wendy's entrance and we found ourselves going south again on I-79. In Morgantown, we got fuel at a Sheetz (8.1 MPUSG, 9.7 Canadian) showing an improvement despite all the hills and mountains. Then we climbed a massive hill to WalMart where we bought some deli wings and chicken tenders to eat on the road. I stopped to talk to the gentleman ringing the bell for the Sally Ann. They start early down here.

We continued on through West Virginia in the rain, driving 55 MPH in a 70 zone and trying to stay out of everyone's way.  Driving in the mountains is a lot more work than setting the cruise and sitting back on the flats.  You need to pick up speed on the downhills and not overrev while trying to maintain that speed going back up.  About 25 miles north of the US 19, we stopped again a a rest area and I spoke to a truck driver about the RV. He said he and his wife were considering buying a used one and had a few questions. The sky was blue ahead of us and black behind, giving us a fine rainbow. 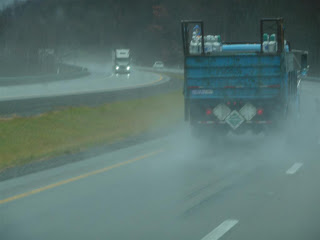 Driving in the rain 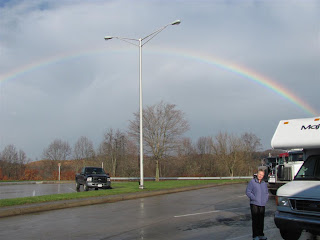 Rainbow in West Virginia
I had called Wrong Turn as we left Erie to see if he was home in Fayetteville W(BG)V. He was and we agreed to meet at the Visitor's Centre at the New River Gorge Bridge. We got there after climbing Powell Mountain on the Mountaineer Expressway at 45 MPH and descending the other side at 50 due to gusting winds. Diane had never seen the bridge so she and Leo watched the movie and looked at the exhibits while Wrong Turn, Sandy and I caught up. We had just missed seeing his fiancee, Katie, by a few hours but we'll catch them in Yuma, Arizona in March.  After finishing in the Center, we walked down and looked to the bridge itself. 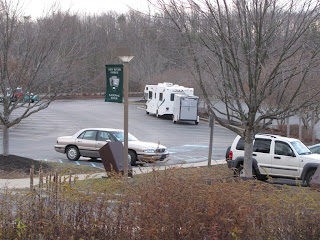 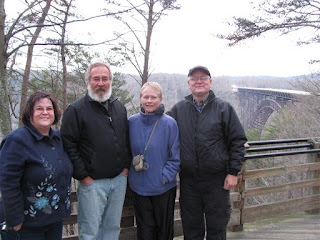 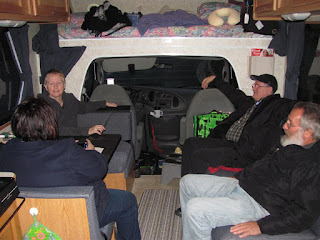 Visiting in the RV
It was getting dark when we crossed the bridge and continued on south. Immediately, it started to rain heavily, the kind that eats all the light and makes it hard to see. We drove to Beckley at about 45 MPH, paid out toll and got on I-77 South. From there to the next toll, the portion we were paying for, was still very rough. The worst road we have seen this trip. I was surprised that the RV rode as well as it did.

We rolled into Princeton and found the WalMart. Unlike Erie, trucks also park in this lot. The rain let up a little and we walked to the adjacent Ryan's Steakhouse for supper. We've never been in a Ryan's before. For a buffet, the steak was remarkably good. After having eaten too much, we walked past the shops and I did find 20 Amp fuses in this WalMart. I checked the generator oil and adjusted it for the 2,500 foot altitude the GPS told me. There is a Camping World in Statesville NC, about an hour south of here so we have some shopping to do tomorrow. Then we buttoned down for the night.