There was a heavy frost in Monroe, North Carolina this morning. Unfortunately, I turned the furnace off before we went to bed and it was pretty cold in the motorhome.

By 7:50, we were rolling towards Myrtle Beach under a sunny blue sky. The highways were 55 and 60 MPH divided with virtually no traffic. We had to slow to 45 and 35 for some towns but it was good going. 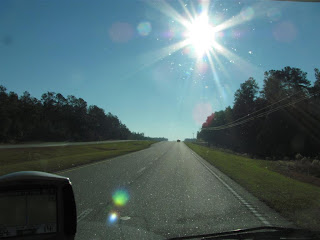 Heading into the rising sun in North Carolina
Just before we crossed the South Carolina border, we passed a huge WalMart distribution center out in the middle of nowhere. The size and scope of this operation boggles the mind.  As we drove along, we could see mist rising from the grass as the frost burned off in the morning sun. Just before Darlington, we saw our first cotton fields. 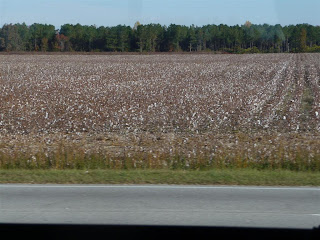 Wish I was in the land of cotton.....
We stopped for a break in front of the Darlington Raceway offices. The famous Lady in Black. We were too early for the museum, which opened at 10:00 AM so, after a brief stop, we rolled on. 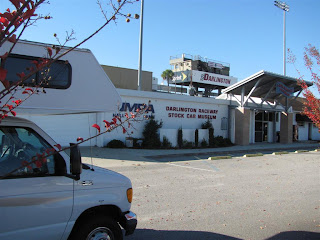 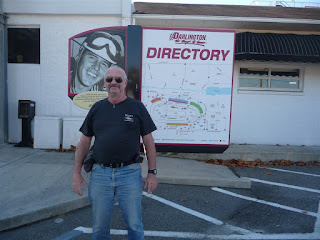 Me at Darlington
Leaving Darlington, we almost witnessed a bad accident. A car was speeding down the center turning lane and didn't see a bicycle coming the other direction until the last minute. He swerved sharply to miss the bike but neither of them should have been there in the first place.

I am really getting to enjoy driving the motorhome. Good thing, since we have committed ourselves to traveling quite a ways in it over the next year. The leaves are changing colour down here and we saw many End of Roadwork signs, but never did see any road work being done.

We arrived at the huge KOA in Myrtle Beach about 11:30 and got situated in a long pull-through site. Leo and I unhooked the trailer and then the ladies went for a shower while I set up the WiFi and shaved for the first time since leaving home. 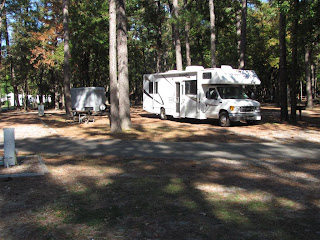 KOA - Myrtle Beach South Carolina
We took the motorhome sans trailer and went for a drive around Myrtle Beach. The first stop was Sticky Fingers Ribhouse where Sarah, a pretty young lady with extensive body art, took care of us. I had a combo with a couple of Memphis Dry ribs, a pulled pork sandwich, two BBQ sausages, coleslaw, mac and cheese and cornbread muffins. Leo had a full rack of ribs.  So much for eating lighter..... 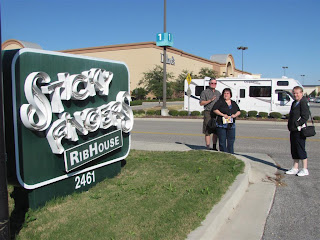 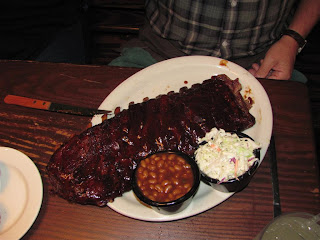 Leo's rack of ribs
Full and then some, we headed across town and too the Farrow Parkway down to Ocean Boulevard and the beaches. There were almost no cars and I parked along the street so we could walk down to the beach. 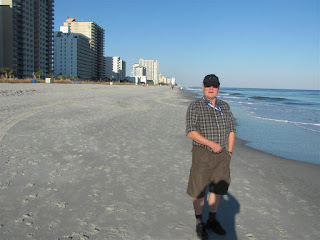 Leo on the beach
Then we moved on down the road a ways and parked in front of the Gay Dolphin, a local landmark. It was named when 'gay' had a whole other meaning. We walked up and down the boardwalk by the 14th Street Pier. there was a sign on the street that said No Cruising. Between March 1st and October 1st, it is unlawful to pass a given spot twice within two hours. Yikes. 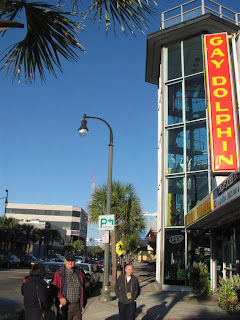 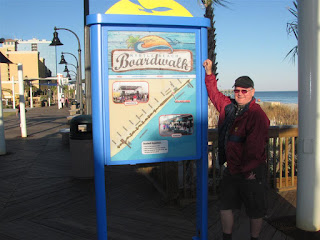 Leo on the Boardwalk 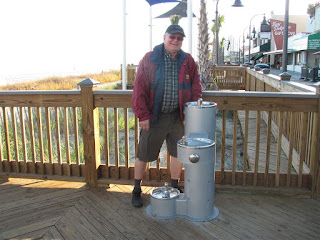 Even the dogs have drinking fountains 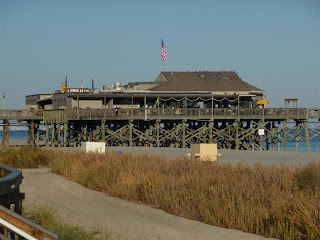 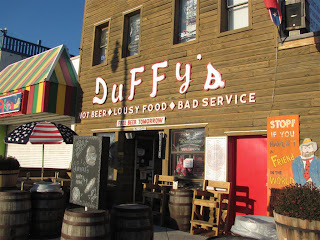 Truth in advertising? - hot beer, lousy food, bad service
From the waterfront, we stopped by a WalMart to get some food and then swung by a Kangaroo gas station where the pump cut me off at $75 but then allowed me a second charge. Unfortunately, the printer was broken so I had to go inside anyway.  The slower pace seems to be working.  With all the local Myrtle Beach driving plus a stint last night at 65 because of the Charlotte rush hour traffic, we have improved to 9.1 MPUSG (11.0 Cdn).  If we ever get a straight level haul, I wonder what I can get that up to?

The sun set at 5:00 PM and, back at the campground in the dark, Leo and I hooked up the power through the new surge protector and connected the water through the new water pressure regulator. The fitting on the RV is leaking a bit so I will have to check washers.

Tomorrow, we will set up the tires for the monitor system and empty the holding tanks for the first time. Pray for us.

Finally, Diane called home via Skype with limited success while I worked on blogs and Email. It is warmer tonight so we should sleep better. Tomorrow, I thing we'll head down towards Savannah.

I liked the drinking fountain that had provision for dogs. I never saw a fountain like that one.