Word from home this morning said the it was -8C with snow flurries. It was much better here and I was in shirtsleeves as we did our morning chores.

First we dealt with the tire pressure monitors. I got out the compressor and the booster cables for power. Then we pulled the monitors from the valve stems one by one, checked them with my two tire pressure gauges, recorded the reading, reinstalled the monitor and recorded the reading on the system. First, all tires were good by the gauges so I got all the compressor hardware out for nothing. Second, all the monitors appear to read about five PSI high except one, which was pretty close. Now I have a conversion table so I know whether all is well when I check each morning but this should not have been necessary since the monitors were supposed to read within 2.7%.

Next, we tackled the holding tanks. Since the grey water tank was virtually empty, we filled it from the city water by turning on the taps in the kitchen and bathroom. To our horror, we found out the bathroom sink drains into the blackwater tank. We found out because it overflowed. The ladies cleaned up while Leo and I emptied the tanks. That part was easy.

Last, we hooked up the trailer and got ready to head for Savannah, Georgia. After taking a few moments talking to a 74 year old gentleman from Virginia Beach who is getting ready to sell his luxurious 38' pusher. Then we hit the road about 9:30.

Diane had read all the information on the area and, not far south of Myrtle Beach, we came to Brookgreen Gardens. She was interested in the butterfly house they had so we turned in. After a miscue in the parking lot, where I turned into the wrong section, we got parked and headed for the Welcome Center. 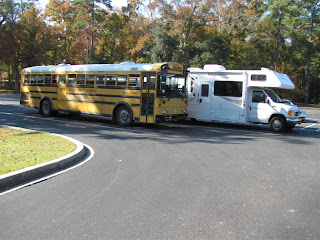 Parked at Brookgreen Gardens
We were disappointed to find out the butterfly house closed for the season on October first but there were many other things to see. Granted it was chilly and I was the only one not wearing a jacket or sweater. First, we viewed a short movie on the history of the area an the Gardens. It told how Archer Huntington (who inherited his wealth) bought several defunct plantations and built the gardens to display his wife's prolific sculptures. The designed the gardens to accentuate her works and others acquired from around the world. No abstracts, however. 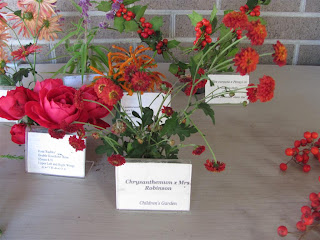 Here's to you, Mrs. Robinson.....
We went to the Diana Pool to meet our guide, Jerry, a volunteer who would share his knowledge of the gardens. He was proud to tell us that if we asked a question he did not know the answer to, he would lie. 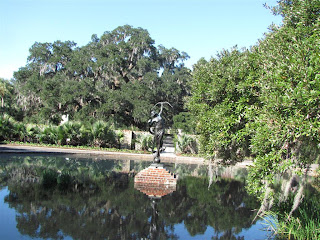 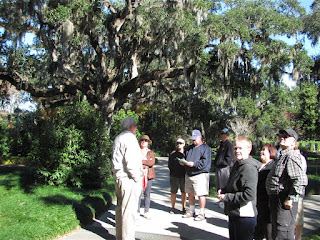 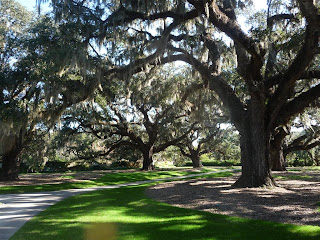 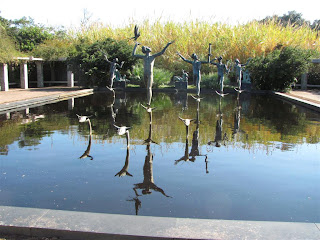 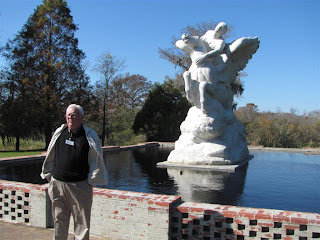 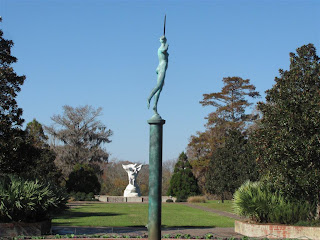 Another huntress appears to be shooting Pegasus 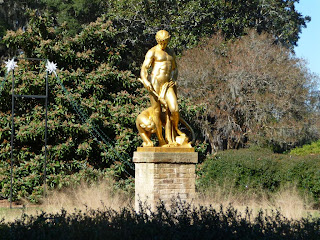 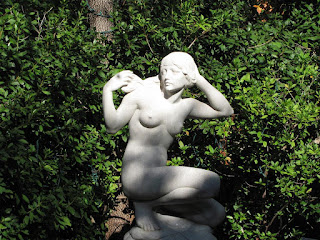 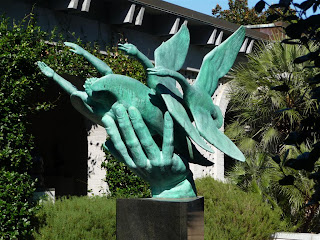 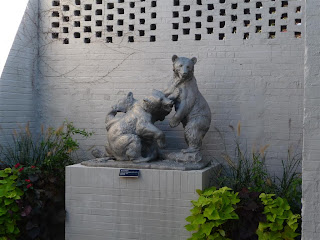 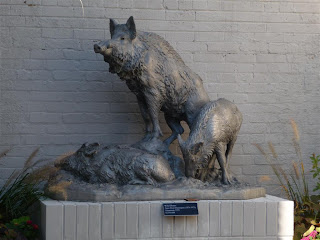 Bears and Boars cast in aluminum 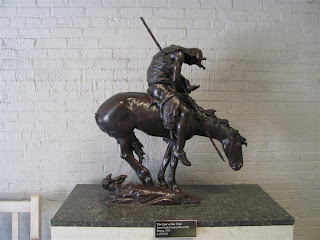 The End of the Trail (for Sherm) 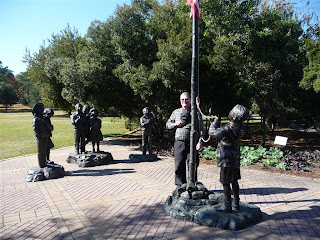 Leo stops for the raising of the flag
In addition to the live oaks, there were long leaf pines, palmettos, magnolias and many other threes and plants. There is no way we could fully appreciate this in the time available.

When the tour was done and the others browsed the gift shop, I spent time talking to Jerry. He retired in 1997 from the steel industry. His last position was president of a 1,000 employee facility that made steel wire, particularly springs. If you have a Sealey mattress, his company made the coils. They also made nails and other products. As usual, I got into a talk about Statistical Process Control and quality improvement.

The next stop was to catch the tram and head over to the zoo, where Dale (an escapee from Minnesota) was getting ready to feed the animals. The first were domestic breeds that represented historic animals of the region. Marsh tacky horses[link], red Devon cows, Tunis sheep and a particular spotted chicken were the same breeds that were raised here back when Francis Marion (The Swamp Fox) fought the British during the American Revolution. 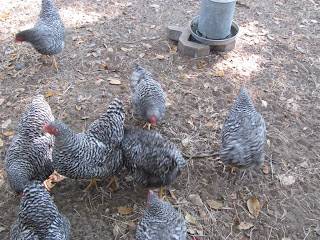 Spotted chickens (I forget the name of the breed)
Then he fed some wild critters including a large group of egrets and cranes and grey and red foxes. He gave the river otters hard boiled eggs which had been cut in half. The more discriminating otters peeled the shells off but one ate the shell and all. The alligators were going into their winter torpor state and had stopped eating, but Leo managed to see the 11 footer lying well camouflaged on the shore. 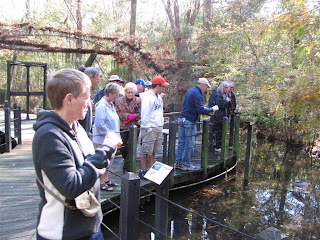 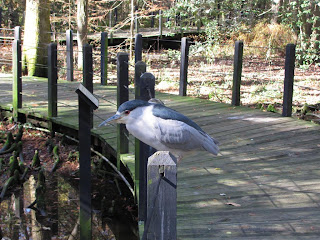 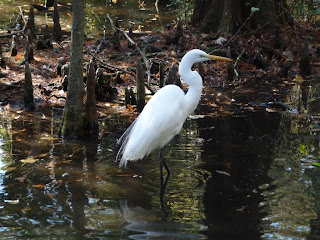 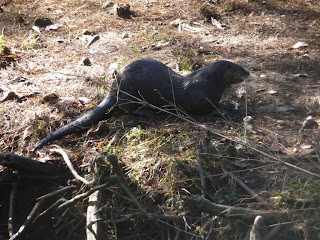 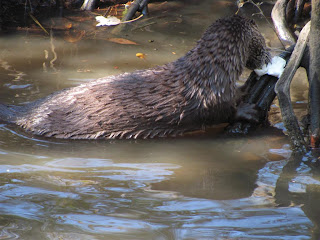 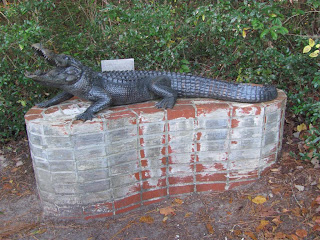 The only alligator I saw 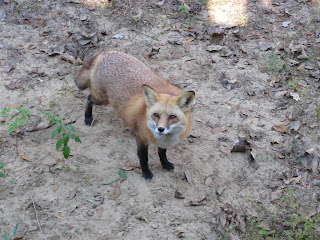 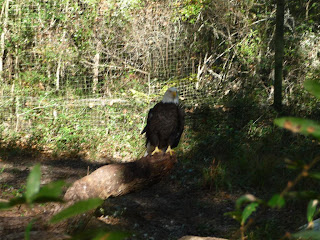 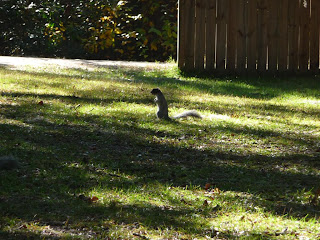 Fox squirrel (not part of the zoo collection) 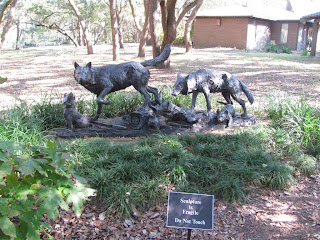 Casting of wolf family
Animals fed, we took the tram back to the Welcome Center and headed for the Pavilion Restaurant for lunch. I had some Angus chili and a ham and cheese sandwich on a hoagie with home made potato chips. Lara served us well and the food was good.

We finally got away from the grounds at 3:00 PM. I broke the news to the crew that we would not make it to Savannah today and called a KOA in Mt. Pleasant (just outside Charleston)to make a reservation.

On the side of Highway 17, I saw a sign advertising Gullah cuisine. I'm aware of the Gullah culture and language but hadn't considered that they had their own cuisine. But I guess if the Cajuns can, so can the Gullah.

Reaching Mt. Pleasant, we stopped at Wally World for water and something for Leo's scratchy throat. Then we pulled into the KOA

I checked the trailer and found that my idea to tie the bike down by the rear crash bars wasn't a good one. I knew that before I did it, but went ahead anyway. A bump somewhere sheared off the bolts holding on the left rear crash bar. The bolts won't be expensive but drilling (hopefully) using the easy-out on the broken bolts will be tricky. Dumb-ass me.

The ladies suggested that we get a room near the Birmingham Airport on Monday night after we bed the RV and trailer down in Centreville. This was proposed because we have to be at the airport by 6:00 AM. Then Diane searched the Internet long and hard to find a hotel with shuttle service this early in the morning. Just after she was finally successful, Blondy (who I had notified of the change of plans earlier by Email) called with the perfect location. Unfortunately, we were already committed to Plan A.

We had a supper of leftovers from the various meals over the last couple of days and, in relative comfort, turned in for the night.