I only got about three hours of sleep last night. Probably nerves and anticipation. I did get three music CD's burned (the motorhome stereo will play MP3's) and figured out how to get my speech at the STOP meeting transferred to the computer as a .wav file.

Leo and Diane arrived at 7:00 sharp as planned. We moved the last few items to the RV and headed out to Tim's to get coffee and breakfast before hitting on the road. As soon as we were rolling, I found the GPS didn't want to acquire any satellites and the upper 12V power plug didn't work. Probably a second fuse I blew playing with the compressor cords. At Tim's, I found the GPS SD card wasn't seated right and, after I fixed that, it was OK. Took the Ford manual, found the bad fuse and replaced it.

Leo and Diane followed us in their car as we headed south. We made our first stop at the French River. The bathrooms there were closed so we christened the on board facilities. The unit was driving well. Near Parry Sound we encountered rain and crosswinds started to affect me, but it wasn't too bad. We stopped again at Tim's Timmies south of the Sound. In the restaurant, I found a large replica of the Algonquin Regiment cap badge with a real moose in it. I was an Army Cadet with the Algonquins when I was in Timmins and Normie's dad served with them in WWII. 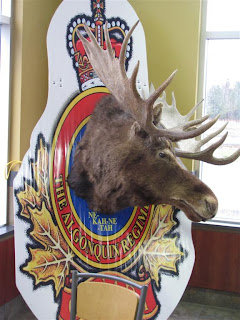 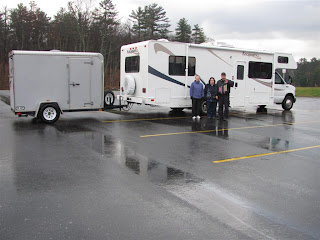 Group photo at Tim Horton's - Parry Sound
I think the Tow/Haul mode may be costing me mileage. I turned it off and found it drove a bit smoother. So it now gets used in traffic or when needing the downshifts to slow down. We'll get it figured out. I did find that one gets used to the little rattles pretty quickly. 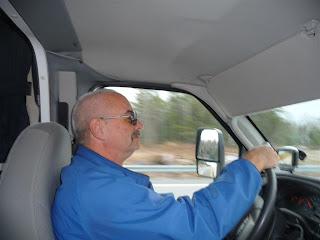 Me in the driver's seat
We couldn't take the ETR407 because any vehicle over 5,000 kilograms GVWR requires a transponder by law. Luckily, it wasn't busy when we hit Toronto and made the ramp onto the 401. This meant taking the 403/QEW to our crossing at Lewiston. I haven't been this way in at least five years and was disappointed to see that the stretch of the QEW in Oakville is still being worked on. St. Catherines is also still under construction.

So we got to the border. You know me and borders. After waiting in line while the agent gave the guy ahead of the us the third degree (no lines at the other lines but I couldn't back up) we pulled in for the first time with a rolling house. I got out and unlocked the trailer so he could look in and then he got inside the RV and checked under the rear bed and looked in the bathroom. Then he checked my name. After saying he knew I wasn't the NCIC James Robinson, he said he had no choice and sent me inside. I guess this is the new policy and I better get used to it. He did agree the system should be able to clear me. Inside, they just asked a few questions about where and how long, stamped my slip of paper and set me free.

We stopped soon after crossing and got gas. The pump cut off at $75 and I had to on and get an overage authorized. I realized that when I filled in Sudbury on the 22nd, the pump had cut off at $100. I had thought it was a coincidence but I short-filled and the mileage I calculated wasn't as good as I had thought. By how much, we'll see.

Leading, I missed the turn onto I-90 East heading for the Clarion Hotel near the airport where Leo and Diane will leave the car. I got there the back way and, once in the lot, I realized it was long and narrow. After we got there final gear loaded, I went down to the end and got some experience backing up with the trailer on. I also found a sharp right turn will cause water to shoot out of the tank overflow.

It was too late to head for the Camping Worlds near Rochester, so we drew a bead on the WalMart at Peach Street in Erie, Pa. Leaving Buffalo as the sun set, we saw herds of deer grazing on people's yards. Yikes. After driving the Thruway in the dark, we pulled off at Peach Street and, to my great surprise, found a brand new WalMart Supercenter next to the Steak & Lube restaurant. We went inside for the first time, as WalMart camping virgins, and asked the greeter who to ask about staying in the lot overnight. She said don't worry about it, anyone can stay here. 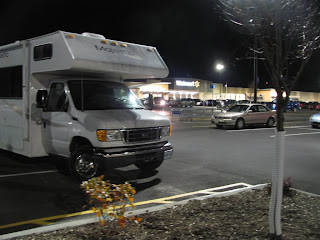 Set up in WalMart - Erie Pennsylvania
Cracker Barrel was across the street and down a bit. We set out for there but only made it to Applebee's since there was a chilly wind blowing. Then it was back to WalMart to buy some groceries and stuff. Back at the RV, we got things configured for sleeping for the first time. I'm sure we'll have it down to a rhythm before too long. Then it was off to bed.

I guess I need to make a trip to Erie. I've seen building going on behind the Steak & Lube but didn't know what was going up there. I wonder if they closed the old Walmart, further down Peach Street.