It was a cool morning in Princeton. Some of the trucks in the lot had left their motors idling all night. This is illegal in Pennsylvania and, in the interests of the environment and sleeping RV'ers, they should expand that to everywhere.

The house battery was still weak but the generator ran better this morning. Adjusting it for the altitude must have helped. But it still surges a bit ever five or ten minutes so I guess a service will be in order at the start of the next trip.

Subway in the WalMart was supposed to open at 7:30 AM but no one showed up so I went back to the RV and had our own instant coffee. I found a problem with the fridge, too. In Auto mode, it is supposed to look for AC power and, if there is none, use LP gas. Unfortunately, in the real world it switches to LP and then shuts down. If I manually select LP gas, it is fine so I guess it is a manual fridge until I can get it looked at. Better, of course, than not working at all.

We headed out about 8:30, following I-77 south through the East River Mountain Tunnel and into Virginia. The tunnels are interesting but not a real problem. I am starting to get quite comfortable driving this outfit. In Wytheville, we stayed on I-77 South, which runs in tandem with I-81 North for a while, and passed two Flying J Truck Stops within a couple of miles. Then it was down the seven mile grade into North Carolina. 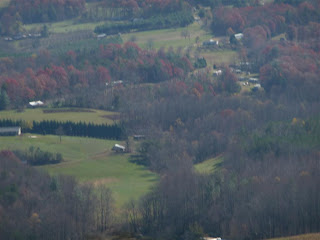 Looking out the window on the seven mile downgrade
We stopped at the McDonald's in Hillsville, NC to use the WiFi. I got the last couple of days blogs posted and checked my Email and Facebook. Then we fueled at a BP that did not cut me off at $75. We got 7.8 miles per USG (9.4 Canadian) which isn't bad when you consider what the mountains through West Virginia are like. I'm curious to see what 55 MPH will give us in the flat lands. I hope its a lot because it takes a great deal of patience to drive the double-nickel while semis are blowing by us at 70 MPH plus.

We found the Camping World in Statesville, NC. They have a huge inventory of units for sale with many high end diesel pushers. I wandered in with my shopping list and dropped about $1,200 in the blink of an eye. The only downside was waiting for someone to install the new house battery. That took over three hours. If I had known how easy it was, I would have done the job myself. Anyway, we have better juice now.  The tech was tied up trying to sort out a wiring problem on a diesel pusher from Ohio headed to the final NASCAR Sprint Cup race of the season in Homestead, Florida.

It was getting late when we left Statesville, just in time to hit Charlotte at rush hour. Going in wasn't bad because everybody else was trying to get out, but leaving on US 74 (we are heading to Myrtle Beach) was a pain for a while as people jammed up trying to get home after busy workdays.

We finally got clear and made it into Monroe, NC after dark, parking at a WalMart Supercenter with a McDonald's. This is probably the only McDonald's in the US without WiFi, so we were offline for another night. There were only a few trucks parked there, luckily. One bobtail parked right in front of us but then moved before he decided to let it run.

We walked about 50 feet to a restaurant called O'Charley's where a server named Mohammad took good care of use. I just had a club sandwich which, to my surprise, was only made with two slices of bread. On the plus side, it had ham, turkey AND bacon in it and was quite tasty. After supper, the other three wandered over to a store while I talked to a grizzled 68 year old gentleman who rode a Yamaha and was raised in the Maggie Valley area. We exchanged opinions on some of our favourite roads in that area.

Returning to the RV, I debugged a glitch in the Tire Minder tire pressure monitoring system that was part of the swag from Camping World. BTW, I bought the Tire Minder because Camping World sells it, the batteries in the sending units are replaceable and the price is significantly less than the PressurePro. The downside seems to be that the operation is a little arcane (which I will get used to) and that the sensors don't seem to agree too well with my two tire gauges. But there is a workaround for that which I will implement and report on later.

I checked the V10 oil and the gen/set oil as well as adjusting the altitude setting back to 600 feet. When the others came back, we talked for a bit and then bundled up warmly (it was getting cool) turned in about 10:00 PM.