It was another beautiful morning, much like the best of July mornings back home. Alabama trucks do idle in parking lots because one pulled in close to us last night and rumbled until dawn. The driver had his two pre-teen children with him. The trucks don't bother Sandy or I because she wears earplugs and I just tune them out, but I know they were a problem for Leo and Diane.

We ate breakfast at Krystal's, a fast food place right next to us. The portions were small and the food was southern salty, but Diane and I liked it. That's 50%.

The Unclaimed Baggage place was close by and, after packing clothes bags for the flight home, we got there by 8:30. They didn't open until 9:00, so Leo and I pulled the Tire Pressure Monitor sensors off the tires and removed the batteries for storage. The pressures, which had been around 70, were now universally 75, probably due to the warm temperatures. After checking tread depths last night, I found that the outer tread was wearing faster so, despite the scale and table data, I need to increase the pressures from 70 to 75. That meant we could leave them where they were.

When the doors opened at 9:00. we checked out the unclaimed baggage. It is much like a very well appointed and organized Value Village. Although there are some very upscale items (appropriately priced), much of it was run-of-the-mill used clothes and equipment. Sandy bought a fanny pack and camera case and I got a new case for my sunglasses. Total cost was just over $8.00. 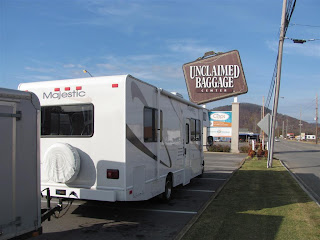 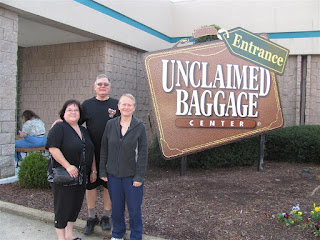 Ready to shop
Shopped out, we left Scottsboro on Alabama 35 to Fort Payne. The motorhome climbed the big hill leaving Scottsboro with ease. At Fort Payne, we caught I-59 southwest. This is one rough concrete road in the right lane, so I travelled in the left until we finally reached nice new pavement. That was short lived and then we had ten miles of rough single lane as they worked on the other side. I was running the posted 55 while a line of transports ganged up behind me. The new surface looks like asphalt. Finally, we got clear of the work zone and settled into a steady 60 MPH.

Diane came up with a great idea. Rather than haul all the luggage down to Blondy's in Centreville, where the RV is being stored, and then back again to our hotel in Birmingham, we stopped at the hotel and left Diane and the bags. The Rime Garden Inn and Suites is an interesting cluster of buildings and I opted to park across the street in a warehouse lot instead. The rooms weren't quite ready so we left Di on a couch in the lobby and moved on.

The plans called for a fuel stop and holding tank dump at the Flying J at Exit 104 on I-20. Unfortunately, while I fueled and dumped three cans of Seafoam in the tank, the dump station was out of service. The station is in major disarray as they remodel due to the Pilot/Flying J merger. We were directed to a Petro truck stop at Exit 100.

Petro had a dump station and it was free. Unfortunately (I seem to be using that word a lot), the dump was elevated, getting in the way of gravity draining the hose. As I lifted the hose, the connector broke off and we dumped half the black water tank in the parking lot. Luckily, I was away from the tank and the lot sloped the other way. By holding the hose in place, Leo and I were able to get the rest of the tanks drained and then we got out of there fast, after firing up the generator and turning on the roof A/C to get the Seafoam through that system.

Blondy called just as we were getting of at Exit 97 to Centreville to say she was only a half hour behind us. I parked in a truck lot at a Jack's Restaurant to wait for her to catch up. We packed more gear and I conditioned the holding tanks for storage while waiting. Blondy soon arrived and we set out for Centreville.
Blondy's home, we got the RV situated under the roof where her step-father's 5th wheel used to reside. Then we unhooked the bike trailer and pushed it under another part of the roof. I went through my checklist as we got the RV ready to sleep. Good thing I had a list.

I opened the valve and drained the fresh water tank. Shut off the fridge and LP valve. Opened and blocked the fridge door. Made sure the roof  vents were open. Then we drove the unit up onto the plastic leveling blocks to get the tires off the ground, covered the wheels (not an easy process because I had to get underneath to run the cords behind the tires) and connected the battery tender. It was at this point that Sandy found the side door wouldn't close due to a post that came into play when I moved up on the leveling blocks. Off came the wheel covers, Leo repositioned the blocks and I moved back a foot. It was then that Sandy suggested the awning hook might help with the cords for the wheel covers. Covered in red Alabama dirt, it seemed like a good idea to me. Finally, I disconnected the power lead to the converter and we set two jugs of Damp-Rid in the home to collect excess moisture. 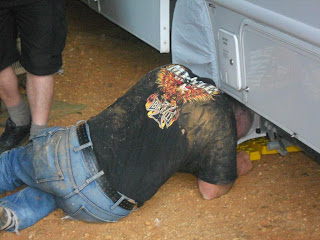 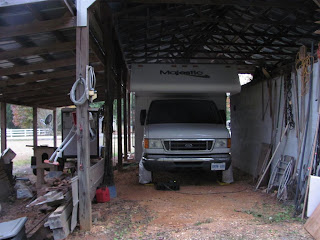 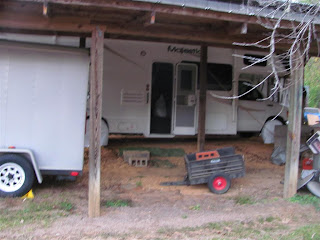 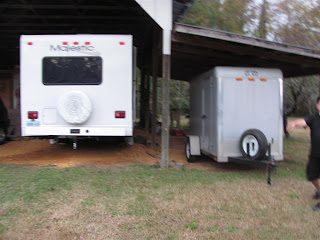 Blondy drove us to an Olive Garden where we shared a fine supper and swapped stories. Then she took us back to the hotel where we confirmed a 5:00 AM Central Time wake up call and our 5:30 AM shuttle to the airport. We watched TV and read for a bit before falling soundly asleep.