After a recent club ride, someone pointed out that there are a number of roadside picnic areas around the province and suggested that, instead of riding to restaurants, the club members bring a picnic lunch and we head for one of these areas to eat. Thus was born the first Yogi Bear Picnic Basket run.

We started the day off with our regular monthly membership meeting at the Falcon Hotel in Garson. Before the meeting started, President Rob presented a cheque for $1,100 to Marianne of the Canadian Diabetes Association to send a local diabetic child to Camp Huronda. This money was raised through our Freedom Rallies. 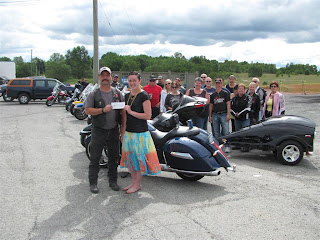 President Rob and Marianne of the Canadian Diabetes Association

After the meeting, those going on the ride agreed to meet at Tim Horton's on Levesque Street, allowing people a chance to pick up their sandwiches. We had taken the truck to the meeting because my Treasurer's briefcase won't fit in the bike, and had gotten our sandwich on the way. We went home, swapped vehicles and hurried on over to Tim's on the bike. 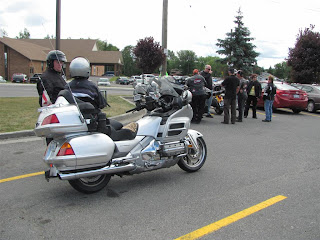 When the clan had gathered, President Rob led us southbound towards Parry Sound. Terry rode second and we were third, holding a moderately tight formation. Four other bikes followed with Nepper and Yollande, in last spot, carrying water and sandwiches in coolers in their trailer. 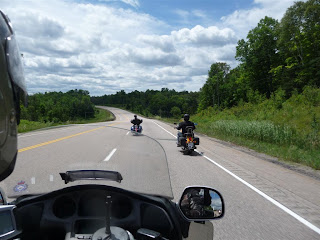 We stopped for a break forty miles south at the French River Trading Post. If this looks familiar, it is because we were already here last Monday with Doug, Carol and Leo. Imagine our surprise when we met club member Sandy who was in a cage due to kids and canoes. 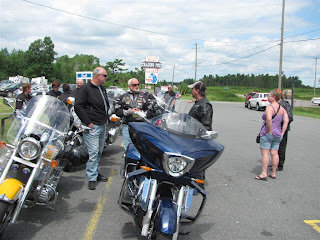 We continued south to Parry Sound, exiting at Bowes Street and using my outdated memories to find the park on Tower Hill.  I hadn't been there in almost ten years but the memory was still good and we found the lot next to the museum and tower on the first try. 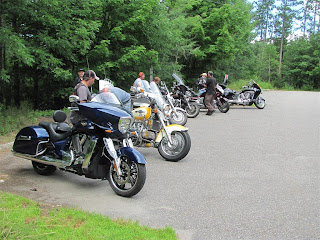 We found some picnic tables and ate lunch. Then a few of us decided to climb the tower. With my fear of heights, I wouldn't have been able to do this a while ago but managed to climb without feeling any butterflies today. I credit a self administered course in Cognitive Behaviour Therapy.Oh yes, and also to solid screening on the tower stairs and platform. 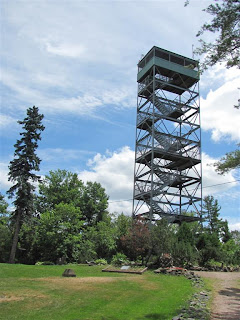 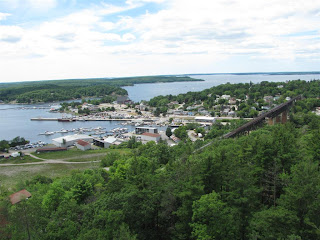 Parry Sound from the tower 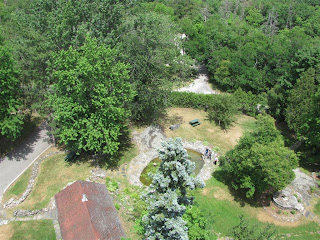 The specks are Rob and Roger 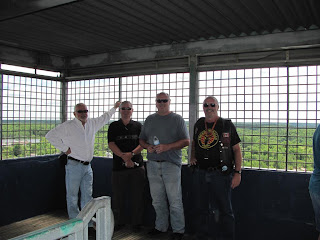 Nepper, Leo, Terry and I at the top

On the way back to Sudbury, we stopped at the same Visitor Centre at the French River that visited a few days ago and walked out on the same snowmobile bridge. Then we continued on to town, using the new stretch of road near Burwash where we went under the very expensive overpass they built to try to keep the wildlife off the road. 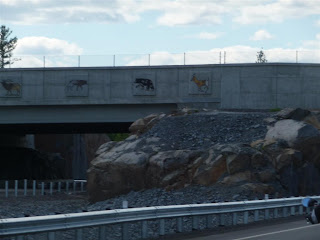 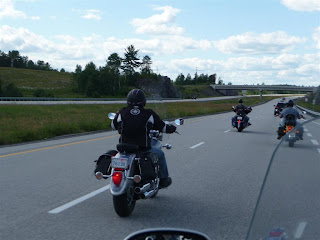 Almost back to town

We continued on to town where the group split at the south end with Rob, Terry and I going through the center. Downtown, Sandy and I peeled off and headed for home. As we turned on Brady Street, we found ourselves behind this immaculate classic, probably on its way to Cruise Night. 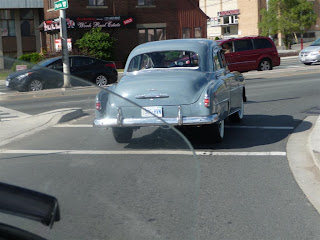 Seen on Brady Street in Sudbury

The first Yogi Bear Picnic Basket ride appears to have been a success so I expect we will be seeing more in the future.