We woke up after a good night's sleep. Shannon headed out while Boomer cooked an absolutely awesome breakfast scramble and I moved one more step away from my promise to eat light and try to lose some weight.

I worked on some more blog stuff (this is getting very repetitive) and then went out to help Boomer and Brad set up the tent/shelter. The setup was exactly the same as the two we set up at Laconia except a little smaller. Scotty and Marlene rolled in from Adrian, Michigan about the time we were finishing. It was good to catch up with the two of them. 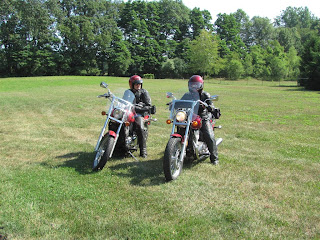 Shannon set up the camera on a tripod to capture the arrivals. Evan and Dee came in from Sarnia towing their Nomad on an open trailer behind a Dodge Ram pickup. Throughout the afternoon, more people arrived including Chris2Tall from St. Louis, Michigan; John Wilson and Jamie from Angola, Indiana; Chuckster from Jackson, Michigan; Daddy Red from Columbus, Ohio; KillbuckKid from Killbuck, Ohio; Skyking from Stryker, Ohio and Nickels and BillyBob from Pennsylvania. Lunch was hamburgers and trimmings plus french fries. We killed the afternoon hanging out and catching up until supper, which was pulled pork and some side dishes. As with the others, it was excellent. 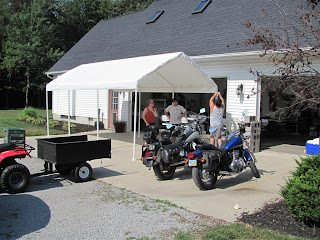 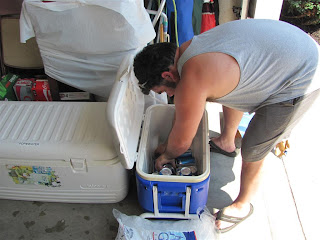 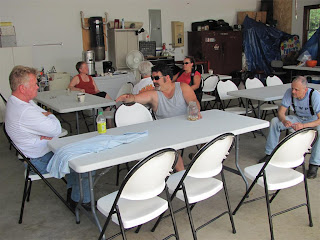 Mike, Boomer and Scotty with Sandy, Marlene and Shannon in the background 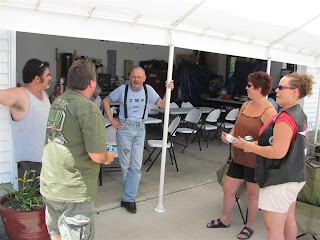 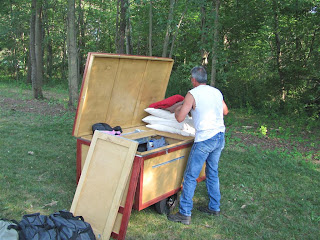 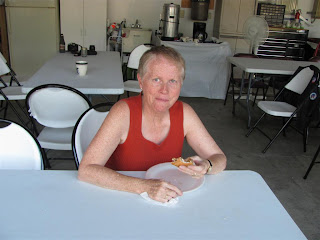 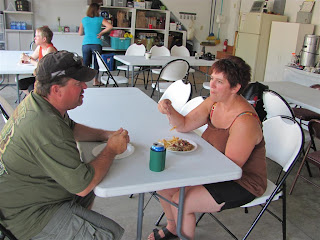 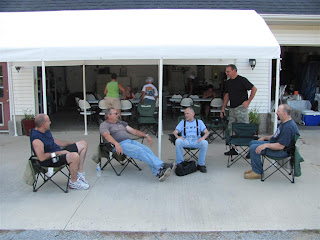 As the sun went down, we adjourned to the side yard where everyone was set up for the night and the fire ring was located. It got very comfortable as the sun went down and everyone sat around telling tales. The last of us turned in just before midnight.
Posted by Jim "Skid" Robinson on 7/13/2012