We were up at 6:00 AM and I plugged away at some blog information as Sandy talked to our friend Bob on Skype. This whole blog thing takes a lot of time but, when I want to go back and relive an experience or remember a detail, it does seem worth it.

Last night, as we sat outside waiting for Pat and Shelley, we watched UPS trucks going down the road one after another. We figured their depot wasn't far away. This morning as we left the hotel, we saw a parade of UPS trucks going the other way as they set out on their daily missions. Interspersed with them were a number of Fedex trucks, indicating that this was the nexus of Rochester courier activities. It makes sense being right next to the Thruway as well as the main route into the city.

As we cruised west on the Thruway, I noticed that about 75% of the trucks I flashed my lights at to indicate they were past me and could pull back in acknowledged with a flash of their tail lights. That compares with about 5% when I do the same thing with the motorhome. I'm not sure why but the bias is clearly there.

We were listening to the Blue Collar Comedy channel when an ad came on. Ice road trucker Alex Debogorski was recommending some backup starting unit for big trucks. You know you have finally made it when you get an endorsement contract. I like Alex and am happy to see he is getting some deals.

The toll booths on the Thruway are tricky with an eight foot wide trailer. There is about three inches on either side of the tires and I go through so I watch  my mirrors instead of what is ahead of us. We fueled east of Buffalo and stopped again west of the city at the Angola Service Center where I got a coffee at McDonald's and we picked up a Subway sandwich for later. The Subway counter was slow as two young Japanese boys, about eleven and eight, tried to order a sandwich while speaking no English. Marcel Marceau would have been proud of the pantomime the staff went through. They were exceptionally patient and professional. The father, who appeared to speak a little English, didn't help. I was amused by his shirt with Elvis emblazoned on the turned up collar.

In Erie, we stopped at Walmart for some pop (including Diet Cherry Coke Zero for Norm) and locks for the trailer. In Ohio, I tried to stop at a lone BP station but the lot was full of utility trucks and I couldn't even pull in. This resulted in going around a five mile block trying to get back to I-90.

I-90 through Cleveland isn't much fun. The  traffic is busy and the lanes are tight. That said, we made it without incident. 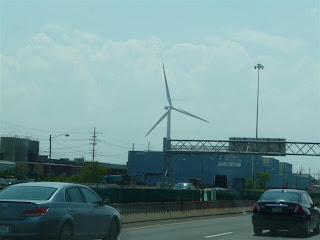 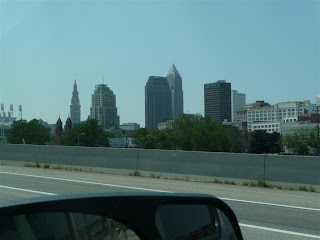 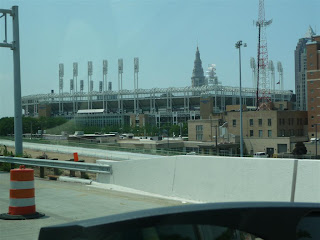 West of Cleveland, I-80 and I-90 merged into the Ohio Turnpike and we were once again in E-Z Pass territory. There was a lot of construction and, for quite a while, we were limited to two lanes with the right two stripped for resurfacing. Somewhere near Sandusky we were passed by a group of motorcycles riding hard two abreast flying Warthog colours. I wasn't familiar with the patch but was surprised, due to the M/C look, to find out that they were police and firefighters who have many chapters in this part of the country. 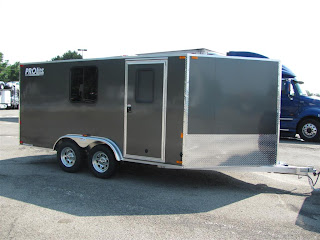 Right side of trailer with door and window 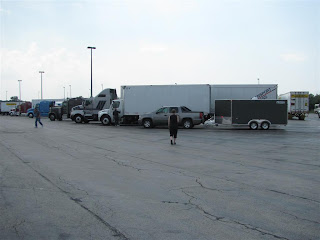 Dwarfed by the big trucks 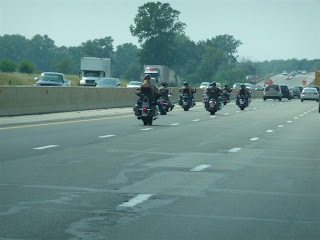 We crossed the familiar I-75 and then exited the Turnpike near Swanton, following the GPS through several turns to Heartwood Place. I was expecting a street but found something more like a driveway. It took a phone call to the house to convince me that I wasn't heading into a hopeless dead end and we soon came to Boomer and Shannon's beautiful house on six acres of mostly cleared land. Give me six acres and I can definitely turn this rig around.

Shannon made supper for us, a new type of chicken recipe that was awesome plus pasta and green beans. We watched TV for a bit and then turned in for the night.

Funny thing you mentioned UPS. There's a UPS depot not even a half-mile from the hotel in Willow Grove where I've been staying, and every day on our way to and from the office we watched a parade of trucks, big and small, between the depot and the PA Turnpike.