While I was carousing last night, Sandy loaded most of our gear into the truck. I had also taken a few moments out to hook up the trailer as well, so there wasn't a lot to do as the day broke. Boomer had some excellent biscuits and gravy ready to go with the coffee, although Sandy skipped the gravy in favour of jam.

We waved goodbye and rolled out of the driveway. I got about two miles away when I realized I had left my black overnight bag on a chair in the garage so we returned to the estate, grabbed the bag and waved goodbye for the second time. I fueled up at a Speedway in Swanton where 87 octane cost me $3.19 per gallon. Low prices are good because hauling the trailer has reduced my mileage from 20 MP(US)G to the mid 12 range.

We followed Highway 20A to I-475 North and took that to US 23 North. Crossing into Michigan, we saw fuel prices were $3.63 per gallon, a rude jolt after the much better Ohio prices. State taxes account for much of the differences. We stopped at a McDonald's in Fenton where they had a special RV/trailer parking lane. That didn't stop some inconsiderate doorknob in a pickup truck from parking there (probably because it was closer to the door) but we found room anyway. It was interesting that, not only did Michigan Mickey D's not have muffins, the young lady seemed to have never heard of them. Yet they had them in New York as well as Ontario. Oh well, regional variations.

We moved north, joining I-75 just south of Grayling. Then we stopped for fuel again in Indian River, where I saw two Harleys that had passed us were ridden by Warthogs (including a very capable looking lady). We stopped on the way back to the slab at a Burger King where a short and significantly round control freak lady left our order on the warming table while she fiddled with other things and then got snotty when I asked her for our food.

Getting back onto the big road, I noticed a Santara Class C RV with rear duallies plus a tag axle. I have never seen an extra axle on a C before but I Googled it and confirmed I wasn't imagining things. Overkill IMHO.

We continued north, crossing the Mackinac Bridge into the Upper Peninsula. It was interesting to see that one of the candidates for Sheriff of Chippewa County was Paul Rambo. I'll bet he took some awful ribbing growing up. Then we crossed the International Bridge, celebrating its 50th anniversary this year, and rolled back down onto Canadian soil. 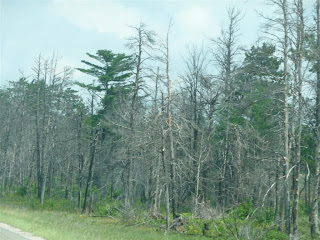 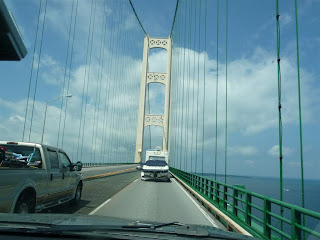 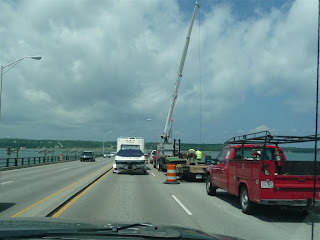 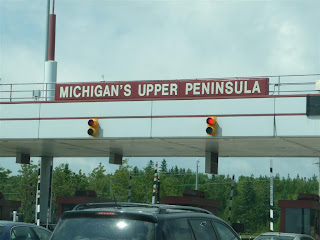 Welcome to the U.P. 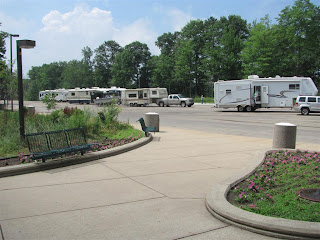 An I-75 rest area overrun with RV's 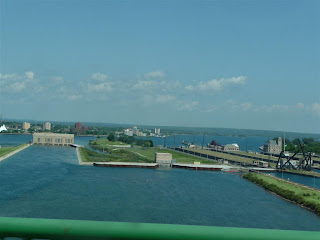 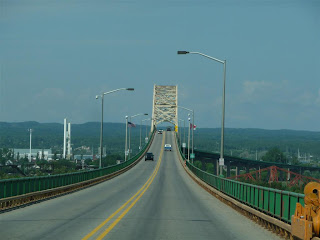 There was no lineup at all at Canadian Customs. We rolled up to the truck booth and declared the purchase of one cargo trailer. The agent sent us inside where we waited in line for a bit as others took care of their business. When it was our turn, our guy decided there should be a race between him and the next booth where another trailer was being processed. He (we) won. After paying for the upcoming inspection by the Registrar of Imported Vehicles and GST on the value of the trailer (less $800 because we were away for a week), they gave us a stack of papers and sent us on our way.

Going from Bay Street to Queen Street to get to Highway 17 was a problem because a section of Queen was torn up, so we took a short detour. We made it, though, and stopped again at McD's to get some supper to go. Sandy wanted a peach smoothie but they were out and she had to settle for banana strawberry. On the way out, we saw a small group of what looked to be traveling HA fueling at a Petrocan station.

On the road, we met many RV's and trucks with car haulers heading west. It turns out this was Drags Weekend in Elliot Lake. Then we met some more HA near Blind River heading west. Turns out they were all heading to Saskatchewan for their National Run. We also noted that there will be a new Robin's Donuts opening in Blind River where the Country Style used to be. This  is a very good development.

We got home at 8:30 and just left the truck and trailer out on the street. Tomorrow is another day.