We were up and had cereal and a pastry before heading out the door at 7:30 AM. It was about 30 miles to Milton and we fueled up on the way for the princely sum of $3.38/gallon. I like New Hampshire gas prices.

We arrived at PROLine at 8:30 and had the trailer out of the storage building and connected in no time. I went through the paperwork with Tom, attached the towing mirrors and set the trailer brake controller and we were out of there. I did need to stop on the road to attach the E-Z Pass transponder since we would be hitting toll booths very soon. 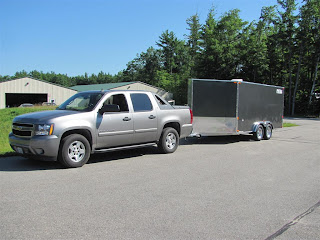 The new rig ready to roll

We arrived at the first toll booth on the New Hampshire Turnpike and pulled into the attended lane. The light indicated that the system had read the transponder and said we were good to go. I asked the attendant if we needed to use the manned lanes with the trailer and she said it was our choice in NH.

We also stopped at one of the unique New Hampshire rest areas with the large liquor store included. I always thought that these probably send the wrong message about drinking and driving. 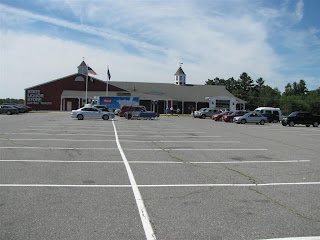 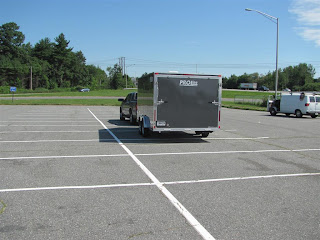 Trailer view from the rear

Entering Massachusetts, we stayed on the big roads even though it added a few miles to the trip. The eight foot wide trailer was fairly easy to keep centered in the lane although it was knocking the fuel mileage down quite a bit.

In Worcester, Mass (Pronounced Wooster), we got off the highway to find a McDonald's as per the sign at the exit. It was a good thing we had a GPS or I never would have found it. But it was there and had an empty spot big enough for the rig. With hamburgers in hand, we found I-290 and continued west.

We connected with I-90, The Mass Pike, after a miscue that added a few miles. I went through the E-Z Pass Only lane and didn't have a problem. Just before the state line, I fueled at a service centre because I figured New York gas would be more expensive.

The final toll booth has memories for me. On our first trip with Ron, Laurie, Brad and Judy, we went through this booth. You will note in the photo below that the E-Z Pass Only lanes are on the right. Brad and Ron went through and then pulled off to the right to wait while I went through the cash lane. Then I turned right to join them on the shoulder and came within inches of being hit by a car barreling through the E-Z Pass lane. 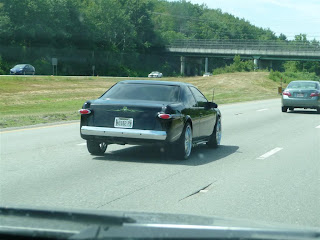 Not sure what this was 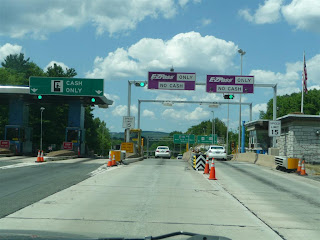 Toll booth where we almost died

When I came to the first toll booth on the New York Thruway, I pulled into the manned booth. The light said I was good to go but I asked the attendant if I could use the E-Z Pass Only lanes in NY with the trailer. Unfortunately, unlike New Hampshire, the answer was no. Oh well, at least we still aren't fumbling with cash.

I missed one interchange and ended up getting off the Thruway but staying on I-90 through Albany. Luckily, it wasn't too busy and we reconnected with the toll road on the other side of the city. The rest of the way to Rochester was uneventful although I did find that the fuel mileage while hauling the trailer got significantly better if I ran about two seconds behind a big truck.  We pulled into the Henrietta Super 8 before 6:30. 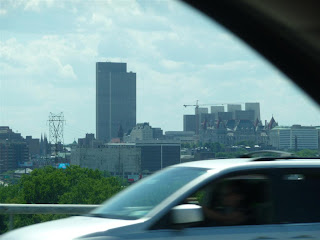 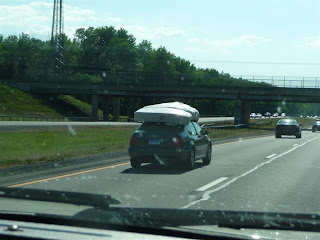 I hope the mattress is tied down securely 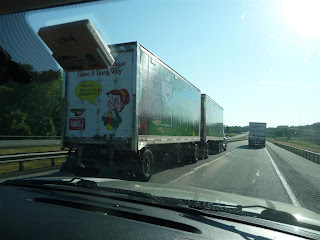 I had let an old friend know we might be in town tonight and called from the road to let him know when we would be arriving. I called him again to let him know we were here and we waited outside for him to get us. We first met Pat in the early 80's on the Ontario rally circuit. We had a few good rides together including an epic trek to Hot Springs, Arkansas in 1985. Pat married Shelley and they had twins, Michael and Christina, about twelve years ago. Since then we haven't seen them very much. Shelley's niece Mackenzie was also visiting from Ottawa so all five pulled up to get us.

Not looking for fancy, Pat took us to IHOP where Sandy ate reasonably and I downed way too much. We caught up on who's been where and rehashed some old times. After supper, they dropped us back at our hotel. Thanks for supper, Pat and Shelley, and we won't let it go so long next time. 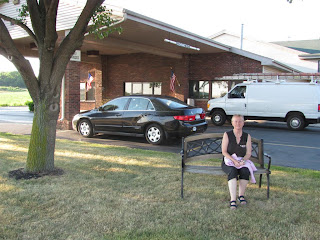 Sandy waiting at the hotel 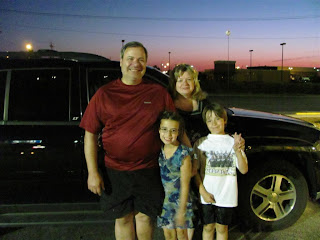 Back in the room, I skipped any more chores and we went straight to bed.