I got an email a few days ago from Garry, a VROC member from southern Ontario. The last few years, he and his wife have wintered in Florida with their full time 5th wheel and returned to Canada for the summer. He rides more miles in a season than anyone I know and said he would be spending the night in Sudbury with his wife as they rode their Voyager back from a gathering in Alberta.

We would loved to have invited them to stay with us but the house was in chaos getting ready for the Freedom Rally next week so they booked a room at the nearby Comfort Inn. When we got a call that they were in, we picked them up in the Avalanche and took them to Casey's, a local roadhouse that started here in 1980 and now boasts 160 franchise locations across Canada operating under several names.

Supper was good and the conversation was interesting. This was the first time we had met Darlene but Garry said she is riding with him more now that he has the Voyager. This bike is a 2009 model and has about 240,000 kms on it. His 2005 Nomad had about the same on it when he traded it on the Voyager and, considering he also rolled high miles on an 800 Drifter between 2002 and 2009, you can see he rides substantially more than twice the mileage Sandy and I do in a given season.

After supper, we went to the Costco mall lot where Cruise Night happens every Sunday evening. I wasn't aware that there were so many fine older cars in Sudbury. We looked around for a while and then took a short tour of the area, ending up at the Big Nickel located at Dynamic Earth.

After sundown, we dropped them back at their hotel. It was nice to finally meet Darlene and we hope to see her again at one of the VROC events down the road. 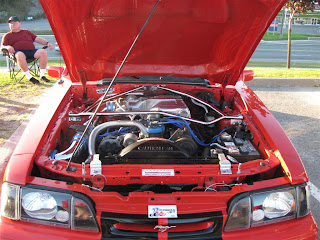 One of many cars at Cruise Night 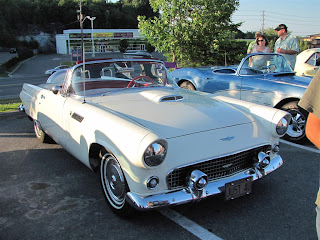 There are many classic cars in town 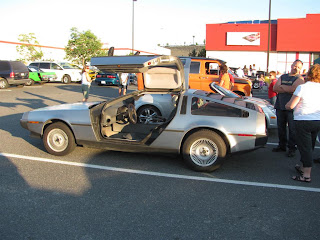 All it needs is a Flux Capacitor 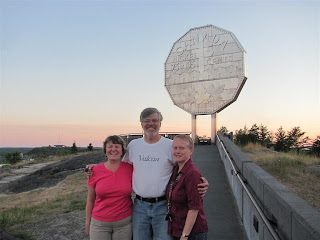 Darlene, Garry and Sandy at the Big Nickel 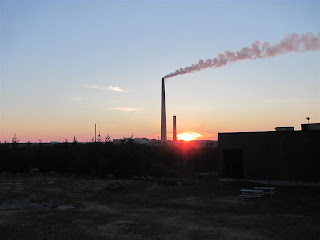