Doug called last night and asked if we wanted to join him and Carol for a ride down to the French River today. We said sure. He tried calling Leo as well had to leave a message. Leo got the message and showed up well ahead of our 10:00 AM meeting time. Doug was almost on time, too. 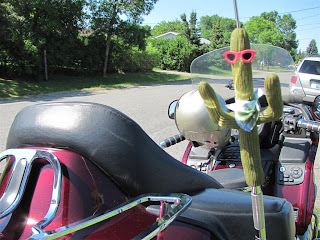 The ride to the French River, the boundary dividing Northern from southern Ontario based on who pays what for licence plates, was pleasant with a couple of notable moments. Leaving town on the new restricted access highway, we encountered a car coming down the first exit ramp directly at us. Luckily he turned to go the proper way but it was still disconcerting. Then, near Ink Lake, we were following two semi trailers with a van in between them. The first blew one tire, leaving debris all over the road and then, less than a mile later, blew a second skin. I worry about the metal wires when I get into this kind of mess on the road. Still,better behind than beside him, which we would have been in the passing lane a mile later.

Unscathed, we arrived at the French River Trading Post, a popular tourist stop on Highway 69. Since I had skipped breakfast, I grabbed a quick bite in the restaurant. Then we moved on. 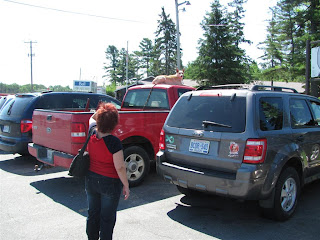 A dog keeps an eye on Carol 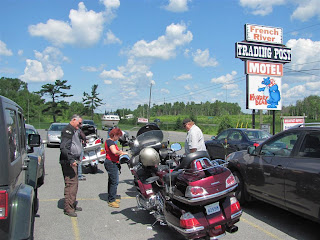 Leaving the Trading Post, we continued south over the bridge and stopped at the Visitor Centre. After checking out the exhibits, we took a walk across the Bill Small snowmobile bridge. I was on the OFSC Provincial Trails Committee when Bill brought the proposal to bridge the French and Pickerel Rivers. We thought he was nuts but he was just very determined.

My contribution to engineered snowmobile bridges in Ontario was the "5 Tons Maximum Load" limit. The bridges are engineered for much more than this but we were trying to discourage larger trucks from using our early Sudbury Trail Plan crossings. This then became a provincial standard. 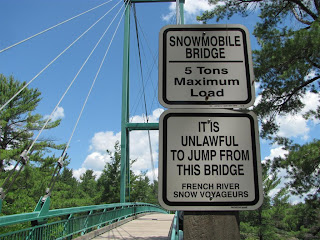 Unlawful to jump from the bridge? Stupid, too. 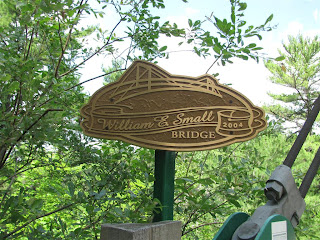 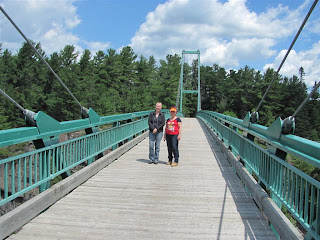 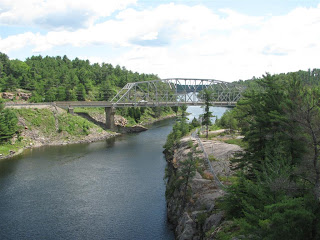 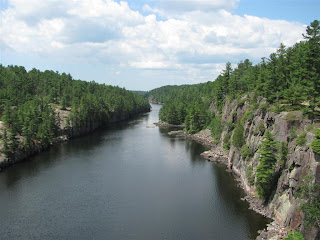 The French River, a major route for the early fur trappers 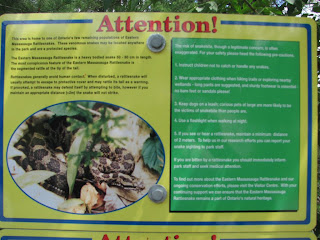 We love our rattlesnakes 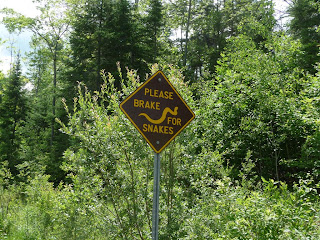 From the French, we headed north to Highway 64 and followed it through Alban to Noelville. There, we took Highway 535 north through St. Charles to intersect Highway 17 at Hager. It looks like 535 is marked for some much needed major rebuilding, so we will avoid it for a while. It should, however, be nice when it is done.  In Hager, we turned left towards Sudbury and stopped at a picnic area along the Veuve River for a break. 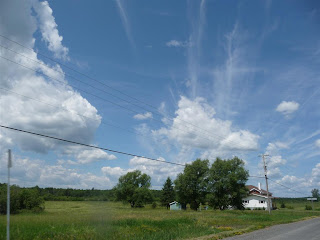 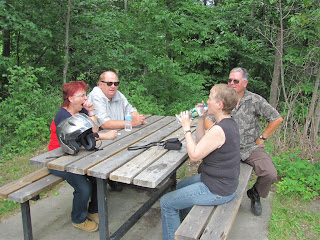 Taking a break along the Veuve River 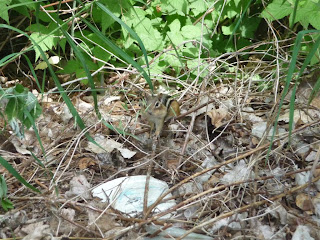 Can you see the chipmunk? 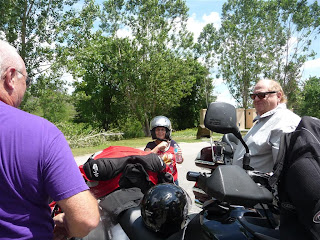 We rode the  last stretch back into town via the Garson Coniston Road. This has a few nice curves on it but they have been patching it with tar snakes, making it challenging on a warm day. Still, we survived and made it home in one piece.