A few days ago, word circulated that Freedom Riders President Rob would be leading a ride to South Baymouth on Manitoulin Island. It would depart this morning at 9:00 AM sharp from Tim Horton's in Chelmsford. Not wanting to be late, Leo came by here and we were on the road by 8:00. The bike handled OK despite the front end not being lowered.

At Tim's, several people were already there.  Dan R. was towing the Kruzer cargo trailer I had sold him but a short circuit in the brake lights kept blowing fuses. Finally, they gave up and he decided to tow it without lights. We got underway at a few minutes past 9:00, heading down 144 and west on Highway 17. 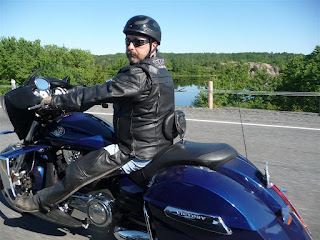 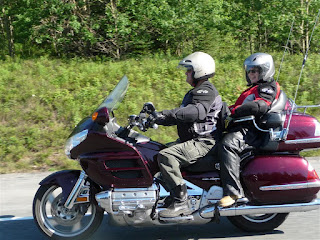 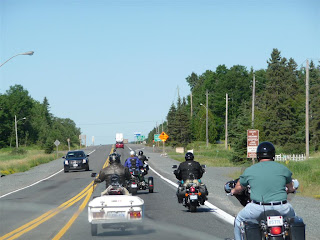 We turned south on Highway 6 and made a stop at Tim Horton's on the south side of Espanola. There were other bikes there and one Harley rider gave me some posters for the Manitoulin Rally scheduled for two weeks prior to the Freedom Rally. It turned out that his name was Larry from Gore Bay and I knew him back in the snowmobile days. 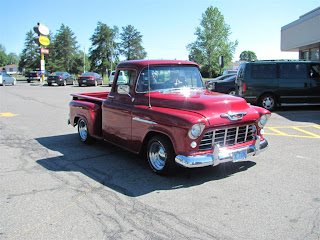 Seen at the Espanola Tim Horton's

We headed south on Highway 6 towards Little Current, one of the nicest riding roads in Northern Ontario. The pavement surface is new and the road winds up, down and around as it traverses the white quartz of the LaCloche Mountains before flattening out as it approaches Manitoulin Island. The single lane swing bridge at Little Current, open every hour to permit access to the harbour, was open as usual when we got there so we waited in line for the only road link to The Island to be re-established. 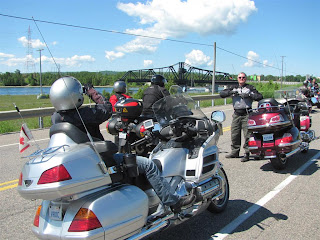 When the bridge closed, we continued south down Highway 6 to South Baymouth, where the ferry Chi-Cheemaun connects the highway to the Bruce Peninsula and southern Ontario. The last time we were here was when we took the dinner cruise on the ferry from the south end last Labour Day weekend. This time, we stopped at Carol's and Earl's Restaurant. Although they specialize in fish, I had an excellent back bacon on a bun with homemade fries and gravy. (Back bacon is what 'Murricans call Canadian bacon.) 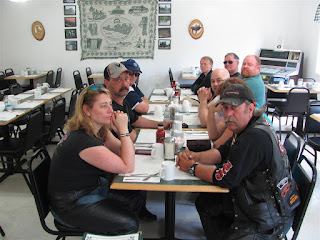 Waiting for food at Carol's and Earl's 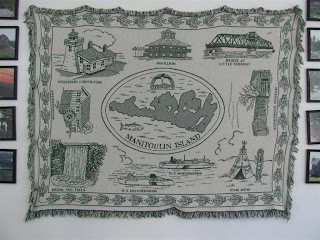 Manitoulin Island at a glance

After lunch, I set out ahead of the group with Doug riding Leo's Wing (Carol on the back) and Leo riding Doug's V-Strom. Doug had never ridden a GL-1800 before but was considering one as a more comfortable option for his passenger wife. We rode back up Highway 6 at a leisurely pace and hunted our way around Sheguindah for the Soap Factory, our next scheduled stop. I won't go into the perils of a GoldWing on rutted grass but, suffice to say, no harm was done. The rest of the club arrived soon after. 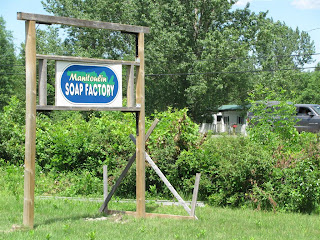 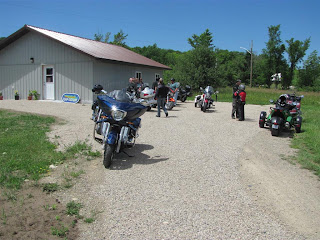 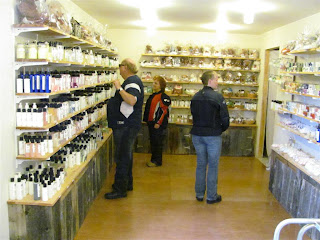 Sandy and I didn't buy any of the many environmentally and skin friendly soap variations this time but will probably stop by again the future. Leaving here, we fueled in Little Current and then crossed back to the mainland and back to Espanola. One of the interesting things on Highway 6 north on the flats north of The Island was a series of deer warning signs with flashing lights. They are triggered by motion detectors along the roadside. Leo says these are set up in a number of areas but this is the first set I have seen. 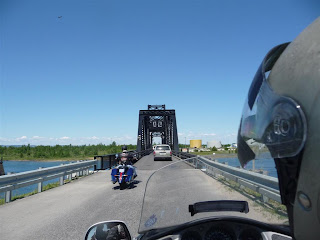 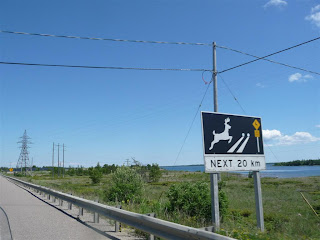 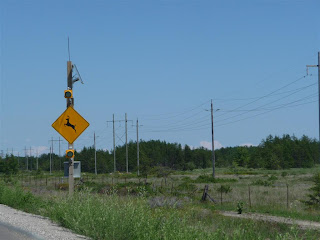 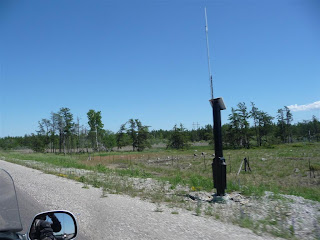 On the way north, we were riding second behind Rob and fell into a rhythm through the curves and hills leaving the rest of the group behind.  They caught us when we slowed in Espanola at the end of an excellent thirty miles. Rob led us to Highway 17 where we stopped for ice cream at the Northwest Trading Company. While there, we saw a number of police vehicles heading west with sirens and lights going. It turns out that a section of the mall roof in Elliot Lake had collapsed into the food court with an unknown number of people trapped inside, but we didn't find this out until we got home. 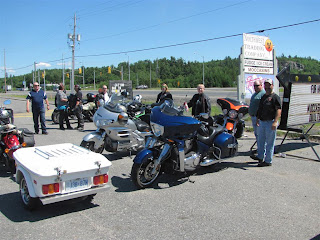 For the last forty miles into town, I ended up leading Don, Doug & Carol and Leo. Doug broke off at Highway 144 for The Valley while Don stuck with us through the by-pass to Highway 17 west. It was a good  day.