Doug is on a week of vacation.  During our golf game yesterday he, Leo and I decided that we wanted to ride to Manitoulin Island today.  We decided that we would meet at my place at 9:00 AM.  BTW, my golf game wasn't nearly as good as my first one last Friday when I ALMOST looked like I knew what I was doing.

This morning, Leo arrived before 9:00 AM on his GL1800 and Doug was right on time on his Suzuki V-Strom.  Our first stop was at the Pioneer gas station just down the road because I didn't fuel up after the Memorial Ride.  On the way out of the lot, I heard a noise behind me and saw the Suzie on its side.  As Doug released the clutch to make the turn onto the street, the bike (which has been idling roughly) stumbled and fell over.  Not much he could have done about it.  We got the bike back up and taped up the cracked front turn signal.  Then we were off.

I led with Doug second and Leo, as always, bringing up the rear.  We took the by-pass around Sudbury and then cruised on towards Manitoulin.  As we traveled west, the sky became cloudy and the temperature started to drop. We could see squalls towards  the southwest, the very direction we were heading.  I stopped about thirty miles out in Nairn Centre where we decided discretion was the better part of staying dry and headed back towards Sudbury to ride southeast instead.

The ride back was uneventful, as was the ride south on Highway 69.  Roadwork around Burwash saw the road down to one lane with flag persons.  They promise that the new four lane through here will be open this fall. At Highway 64, we turned east and proceeded through the village of Alban.  Highway 64 has  some straight stretches and a few sections with decent curves.  Before long, we arrived at the thriving metropolis of Noelville, which is two blocks long and boasts a church.  We stopped for lunch at a local diner where I had the special, a corned beef sandwich with fries, a bowl of chicken noodle soup and coffee.  I saw as we were leaving that they had sugar pie.  My glucose levels are grateful that I didn't notice this while I was sitting at the table. 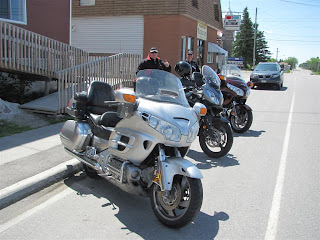 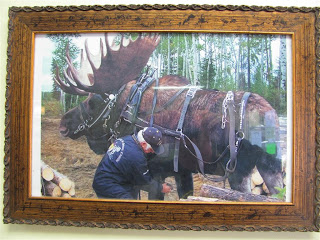 Photo in the restaurant

From Noelville, we continued along 64 through the picturesque West Arm area, referring to the west arm of Lake Nipissing.  Unfortunately, my picture taker was back at home.  We ended up in Verner, where Highway 64 crosses the Trans-Canada Highway 17.  This is where RL Equipment, my Honda dealer, is located.  I stopped in and ordered a set of new tires from service manager Jim, arranging to have them installed and the recall check of the secondary master cylinder done when I get back from New Hampshire in a couple of weeks.  I don't monitor the tires and other maintenance nearly as rigorously these days due to the lower mileage and having a nearby trailer no matter where we are.

From Verner, we headed west for the 45 mile ride to Sudbury.  The weather consisted of active squalls that were confined to the north side of Highway 17.  As we approached Sudbury, they were more in front of us. Doug turned off at the Garson Coniston Road while Leo and I went straight into town.  I stopped for gas so that I would be fueled for the club ride on Sunday.  As I went to cover the last mile home, raindrops started falling on my head.  Damn.  Typical.  Luckily, I got home and into the garage without more than a few drops catching me.

Today was a nice ride with friends, just what I was looking for.