It was another clear, sunny morning, extending the streak of unusual June skies in southern New Hampshire. Karen made eggs and toast for breakfast before we went out, hooked up the trailer and loaded the bike. We said our goodbyes and were rolling by 8:45. Many thanks to Joe and Karen for taking us in for the duration. Next year, we will either have a camping strategy in place or a motel reserved but it sure helped us out in a pinch.

I opted to go north to the Epson Circle and take Highway 4 to I-393 to I-93 to I-89 as the simplest route to the road north. We cruised along without anything special happening although we did stop at a Rest Area near Lebanon so I could call the Massena Super 8 and reserve another room. 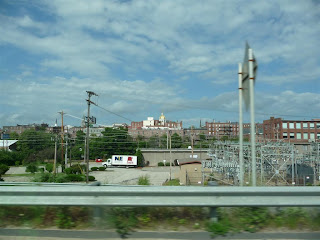 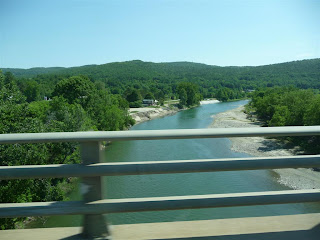 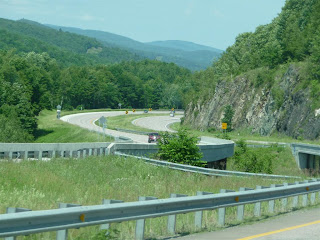 We finally decided to stop at a McDonald's in northern Vermont for lunch. I had it programmed into the GPS as a Via Point so we got off I-89 at exit 21 in Swanton.  The Mickey D's lot wasn't very big but I found a place to leave the rig. After lunch, we got back on I-89 north and discovered that the restaurant Via Point had masked the fact that this was the exit I wanted to take to get to New York.  We drove all the way to the Quebec border before there was another exit where we could get off and head back south.

A group of Harleys with Ontario plates obviously heading back from Laconia was ahead of us. It was a great day for riding and they seemed to be enjoying themselves.  The bridge to New York across Lake Champlain was still a challenge due to construction.

Sandy got a good picture of Fort Montgomery on the New York shore. This was the second fort built on this location to protect the United States from Canada (Britain).  The first, in 1816, was found to be on the Canadian side of the border and was abandoned.  After this point of land was ceded to the US in 1842, this second structure was built. It was named for General Richard Montgomery, who was killed in 1775 at Quebec City during the Invasion of Canada. 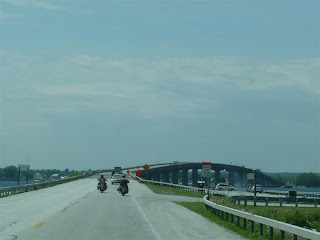 Bridge from Vermont to New York 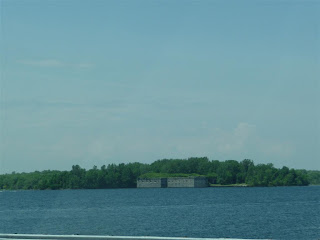 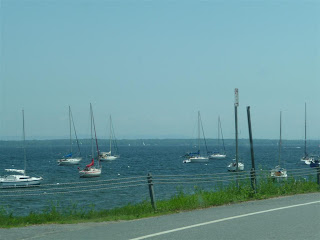 I started to get very tired as we drove across New York. This is getting more common and I will be mentioning it to the doctor when I next see him. We arrived at the hotel and got parked without any problems. We ordered a thin crust Domino's pizza, some bread sticks and a couple of chocolate lava cakes for delivery and settled in to watch the NASCAR race from Michigan. The pizza was good but I should have specified that they go light on the sauce. Dale Jr. won the race breaking a very long dry spell and I had my best showing of the year in our fantasy league.  Up six places on the year-to-date standings.

I managed to get one blog day done but ended up too beat to do any more. I fell asleep watching something (I can't remember what) on the TV.