It was Poker Run Day today.  We set out for breakfast at The Circle and found the back room largely filled with VROCers by 8:30 AM.  After we finished, we rode up to the campground. Joe said we would be running an abbreviated poker run route and so we wouldn't be leaving until 10:30.  He asked me to ride sweep and I drafted Lucky Al to hang out at the back with me. 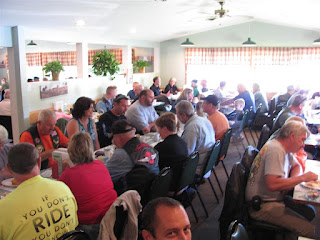 A Circle full of VROCers 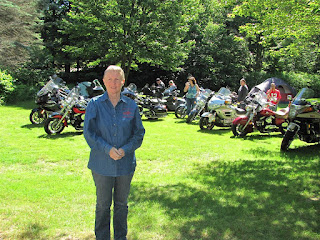 Sandy at The Lazy River 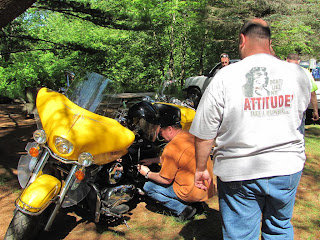 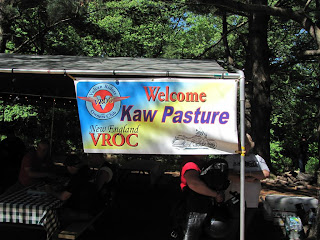 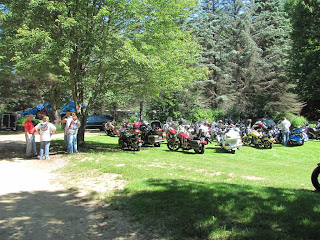 Bikes and people at The Lazy River

One of the key features of a poker run is the poker hand.  There are many different ways of getting cards but this is one of the simplest. Before the run starts, we each pay $10.00 and draw three cards.  These are recorded on a slip of paper.  Then we all ride as a group through the countryside until we get to the end, where we each draw two more.  The pot is split equally between the high hand and the low hand. Sandy's three cards were nine high so she had a chance at the low while I pulled king, queen and nine.  OK, I was hoping for a ten and a jack at the finish.

The run got underway right on time.  We headed up Highway 28 with, coincidentally, 28 bikes by my count. In Barnstead, Joe led us onto the back roads where we pretty much stayed until the end.  The pace was leisurely and everyone held their position well. Blockers fell out when directed, protected the intersections and then fell in ahead of Al and I.

Part way through the ride, Joe stopped at a small gas station for a break. Some Harley riders who were already there drooled over BB's BMW. 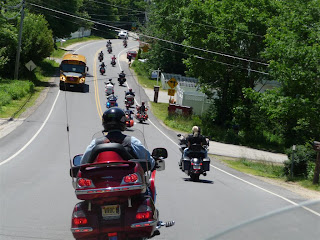 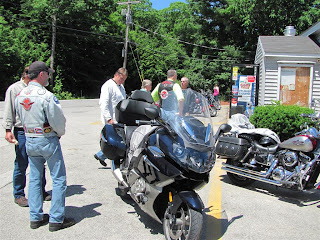 Badger admires the 1600 Beemer with a Harley guy 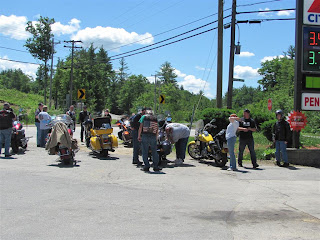 Rest stop on the poker run 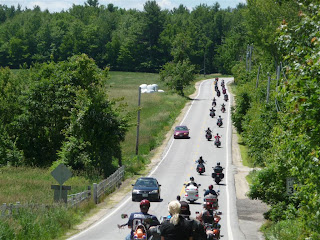 Rested up and looking even better

We arrived at HK Powersports in Hookset slightly later than expected.  They had water, soft drinks and snacks laid out for us as well as a significant discount on accessories.  Joe and Jess were administering the drawing of the last two cards at the door.  Sandy got nothing except a face card that wiped out her low hand.  I shuffled the deck, cut the cards and dealt TWO KINGS!!!!!!!  That made three.  Maybe.......

After checking out the Kawasaki, Victory and Spyder inventory, as well as their Haul Mark trailers, we headed back up to Joe's to pick up my Passport USB hard drive so that Lucky Al could copy my inventory of tunes.  Then we moved on back to Lazy River where we hung out with everyone until it was time for the CLAP Raffle.  CLAP is a VROC term referring to Chrome, Leather And Performance.  I bought a string of tickets.

Before the raffle started, Joe got up to announce the winners of the poker run. He gave $190 to the holder of the low hand and then said the high hand had been very close.  Three jacks and three kings were close but Dawn won with a club flush.  Oh well, it couldn't have happened to a nicer person.  I was clapping and then settled back when Dawn came over and gave me $190.  Seems I did win and Joe was just screwing with me.  Good one. It also came out that Joe missed Lucky Al's three queens, so the finish was three jacks, three queens and three kings.  A very close ending.

The CLAP Raffle had a number of prizes including certificates that the winner could send in to Kawasaki and the prizes would be shipped.  Except to Canada.  Steve said we could have them shipped to his place and we could get them later.  Good thing because we won three.  An umbrella, a camp chair and a nice lady's watch.  We actually won five but there was a three prize per person limit.  VT and U-Turn also hit that ceiling.  Then the  tickets all went back in for the grand prizes but we didn't win one of those.  Lucky Al did, though. 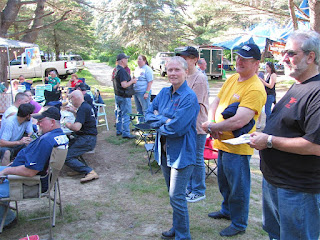 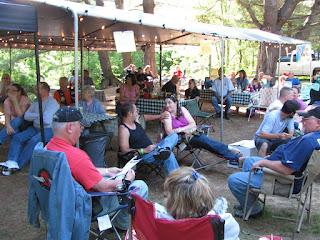 Waiting for the draws 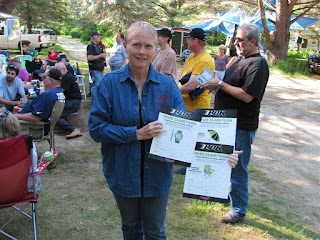 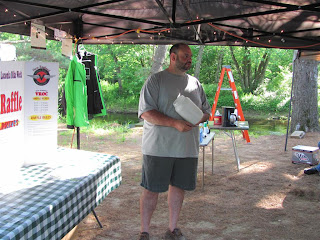 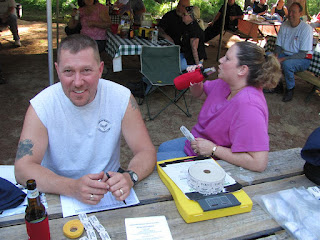 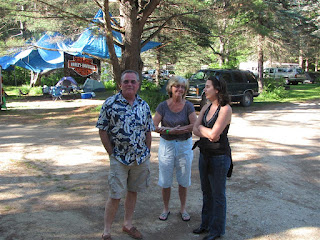 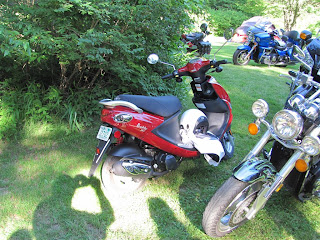 
After the draw, the dinner began.  The pig had been roasting all afternoon and it was stuffed with chicken, of all things. The spread included the pork and chicken, chicken, macaroni and regular salad, beans and buns. There was enough that no one felt they could have eaten more.  Dawn had some amazing cookies as well.  Sorry I missed the photos.


Sandy left with Karen after supper while I stayed and hung out with friends.  Brother B. had gone home and brought Laurie for the evening. We missed her since she has been part of the trips we have shared over the years.  Coach Rick was in from Rhode Island with his son Pyro, another face we haven't seen for a while.  His loss of 83 pounds has him looking very good.  We visited as the sun went down.  I finally headed back to the house about 10:00 PM.  Joe came in later while U-Turn was somewhat later.