Yesterday, Bobcat spread the word that he would be leading a ride to the Maine coast this morning.  His plan was to be side-stands up at 9:30. We planned to go, as did Joe, so we wound our way to The Circle for 8:00 AM.  Some of the campground crowd was already there and others rolled in as we ate.

Up at the campground, the group assembled itself.  It was smaller than yesterday because some key players opted to take a different ride or (in some cases) get over their hangovers in peace. 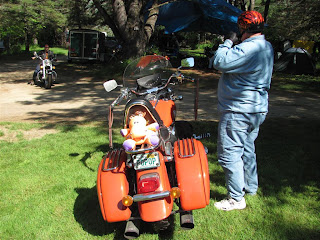 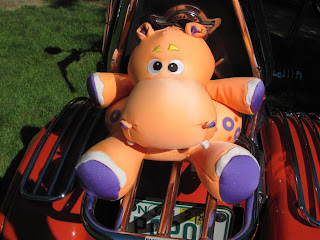 I think it's a hippo

We were again designated to ride sweep but our partner, Lucky Al, was having a typical moment.  He had left his headset cord draped over the handlebars when he rode to The Circle for breakfast and fuel.  When he  got back, the upper cord, about18" long, was missing.  So while the group turned north on 28, I followed Al south as we rode the shoulder back to The Circle looking for a small black cord.  He checked the restaurant and then we moved on to the gas station.  Amazingly, we found it lying in the middle of the road in the traffic circle itself. Not unexpectedly, it had been run over so many times that it was destroyed.  I loaned a sadder but wiser Al my spare cords and we motored on.

Rather than chase the group back up 28 and across the back roads, I considered Bobcat's comments about the route and we took a shortcut across Highway 4 and then up 9 to Barrington where we waited for them at an Irving station.  Before too long, there they were.  I had planned to fall in behind but Bobcat saw us and pulled the group into the lot. 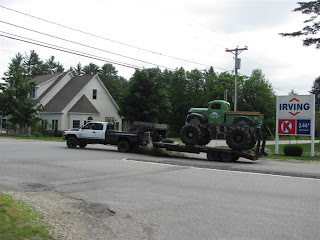 I think they took some liberties with the restoration 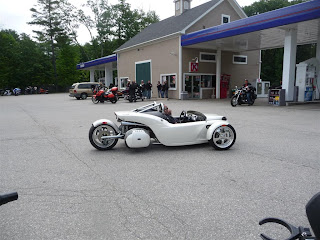 The pipes on this thing were obnoxious

Rolling on, we passed through Dover and stuck to the back roads as we crossed into Maine.  The temperature had started dropping when we ran into overcast skies and kept going down as the chilly wind off the ocean got stronger.  Through York, we could see people sitting on the beach, determined to make the most of their vacation no matter what the weather. Bobcat stopped us at Sohier Park, adjacent to the Nubble Lighthouse.  We could see the light today (unlike foggy days in the past) but we didn't stay too long. 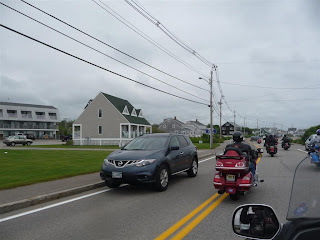 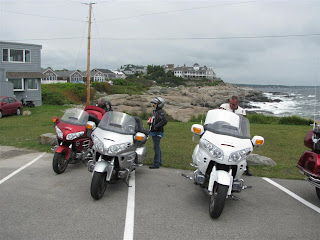 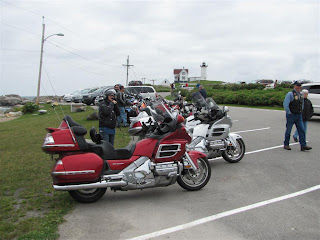 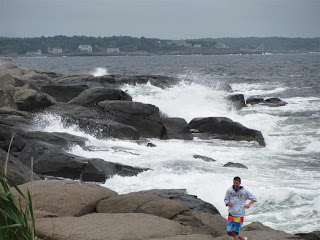 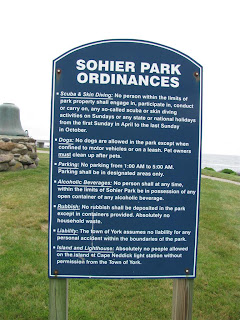 No scuba diving on Sundays?

From the Nubble, we continued along the shore to Short Sands Beach where we parked the bikes two and three to a spot.  The meters required $1.00 per hour so we ponied up enough coin for an hour.  It was still very chilly as the wind clawed at us.  I'm not sure what the water temperature was but a group of bikini clad teenagers were splashing in it. They have tough kids down here. Some of us walked around town while the rest waited by the beach.

We had a nice chat with a York bicycle cop who was giving tickets for expired meters.  He said we could put as many bikes as would fit in a spot but, if the meter expired, we would each get our own ticket. We also talked to two couples from Quebec City on GW trikes.  It was a short conversation because they didn't speak much English. 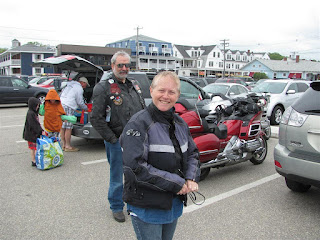 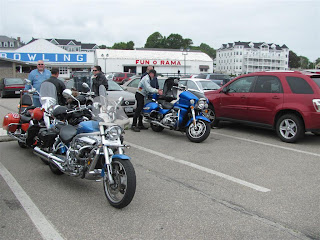 Historic buildings in the background 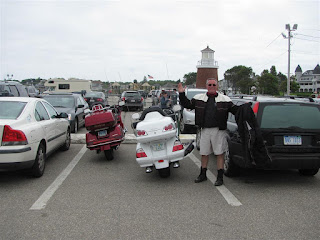 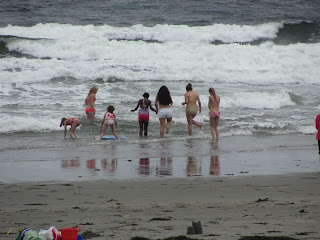 Teenagers in the surf.... 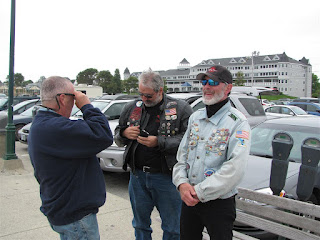 ....while we are bundled up 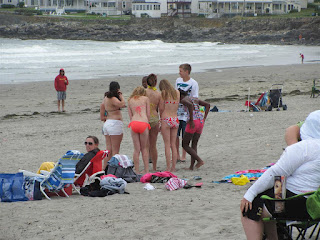 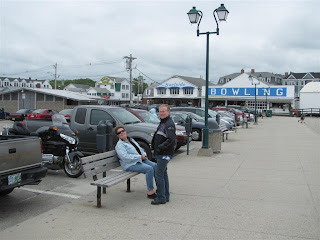 Karen and Sandy wondering when we'll be leaving 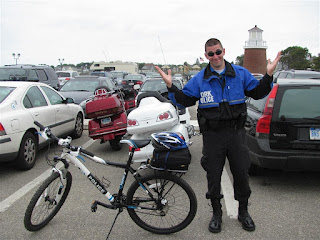 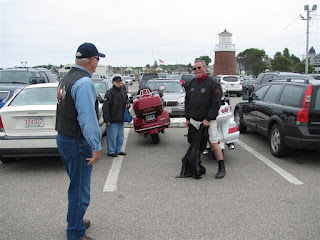 Bob putting his pants back on

When our hour was up, we rolled out of town following our leader to Portsmouth and then back to Dover NH.  Coming out of Portsmouth, we were held up for a bit due to an accident.  We had a clear lane but everyone had to rubberneck.  I'm not sure how someone T-bones someone else when all three lanes are going the same way, but it happened. Then, as we were exiting the highway to catch Highway 4 near Dover, a Volkswagen decided it wanted to exit there as well and moved right with utter disregard for the bikes. There are some odd drivers around here.

We stopped at Newick's in Dover for late lunch.  It got later because the young lady serving us was very slow and not very attentive.  Sandy and I had thick clam chowder, lobster rolls and homemade potato chips. Unfortunately, we had seen our meals sitting on the board in the kitchen for fifteen minutes before they were brought to us. But it was so good it took the edge off our complaints about the service.

After we finished, we joined Joe and Karen for a ride directly back to their place. The skies cleared again as we moved west.  In Northwood, another car accident was being investigated by the Nottingham Police.  I wonder how many sheriff jokes they have to endure?

One thing I still have trouble with is the convention of not waving at other bikes during bike week. There are so many that you would have your arm out steady so it just isn't done. But I often wave automatically anyway before I can catch myself.

At the house, we packed our riding gear and big suitcase and put them into the back of the truck.  Then we took the truck to the campground.  The first thing we saw there was a yellow 800 Vulcan with a Ukrainian Dnepr sidecar attached.  This unique outfit belonged to Matthew (aka papasurf).  He has had it for about four years and you can tell he marches to the beat of a different drummer.  I was impressed.  He also passed on this interesting link on Hubert Kriegel and Ten Years on the Road. 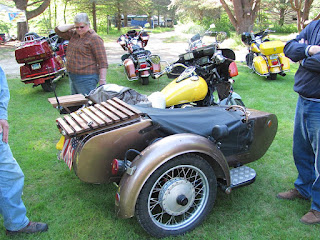 Supper tonight included hot dogs and hamburgers Steve cooked on the grill along with leftover pork from yesterday done in the crock pot.  It was great but we had just eaten a few hours before.  Still, I did my best to make sure there were no leftovers.  After supper, we took down the shelters and got them stowed.  Then U-Turn and I started a libertarian discussion.  B Bear chimed in with some interesting points and then others joined the fray. About  this time, Sandy and I opted to leave and said our goodbyes to everyone, fading off into the setting sun.


There has been talk about the future of this rally.  There is a lot of work done by very few people and they are getting tired.  Joe handed it off to Steve who is looking for someone to take over but no one has stepped up to assume overall responsibility. Many of us pointed out that the workload and complexity can be reduced by cutting out some of the features.  All we really need is a location and a date.  We can look after ourselves for the rest.  Interlochen is a fine example of just this type of gathering.

In any case, thanks to Steve and Dee for ramrodding this, U-Turn for doing the paperwork, Joe and Karen for being there, Bobcat for assistance and all the other who pitched in.  Our whole travel schedule is based on being where VROC gathers and this is one we really enjoy.  Let's hope we can find a way to keep it going.


One wrinkle that developed this weekend was a leak in the left fork seal.  I think it happened on the road after the Hurricane Mountain adventure, but who knows for sure.  The problem is that not just anyone can work on the Traxxion front end.  My shop looked at the instructions and the special tools required and suggested I should take it to a pro.  There is only one in Ontario, Paul Hilliard in Merrickville.  I put in a call to Paul and found he has been quite sick since February and is unable to do the work.  He referred me to Mark in Lake George who got right back to me.  He was leaving tomorrow for a ten day vacation so that was out. Then Paul called back and said his Honda dealership could do it if Paul brought the special tools and supervised. So we have a plan. On a side note, as much as I love the Traxxion, I will never put anything on a bike again that a regular dealership can't fix.