Neither of us got a lot of sleep last night.  Because we had less than 400 miles to go today, we got off to a lazy start.  Eventually, we got our carry bags packed and out to the truck.  The temperature was starting to build and it looked like it was going to be another scorcher.  In the course of stowing the gear, we found a whole new storage area between the front seats that we hadn't seen before. 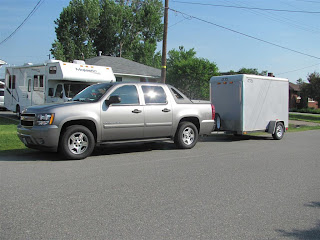 Loaded and ready to roll

We stopped at Tim's on the way out of town and I ordered a sausage biscuit.  This is not a full breakfast sandwich and should not contain egg, but not many must order them because I often get the wrong thing.  The lady who served me this time not only got it right, she asked whether I wanted a biscuit or an English muffin.  I took this whole exchange as a positive omen.

We stopped again on the side of the road in Wahnapitae to check the bike.  All the straps were still firmly in place. Then we were rolling eastbound for real.

In Sturgeon Falls, Highway 17 through town is in terrible shape.  This is a legacy of Mike Harris, the Conservative premier who led Ontario in the late 90's.  He made municipalities responsible for the highways passing through them and wiped out any semblance of consistency in what used to be the provincial highway system.

On the far side of North Bay, we started into the rise and fall of the highway going over the low but steep hills.  I watched the Instant Economy readout on the dashboard, seeing the MPG plummet on the upgrades and go through the roof as we would go down the other side.  I noted that the Tow/Haul Mode on this transmission does not have the same braking function as the motorhome, but than this is a GM, not a Ford.

They are building a traffic circle at the main intersection in Mattawa that we detoured around.  Then we found a number of places where they were replacing culverts.  Next, the highway was very bad in several places, particularly between Bissett Creek and Stonecliffe.  They say they will be resurfacing this stretch this summer but all we saw in the 13 kilometers was one excavator working in a ditch. 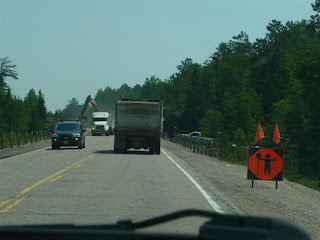 Excavator working in a ditch

We made a quick stop at the gas station in Rolphton.  A sign said the bathrooms were only for customers so I bought a coffee and a couple of chocolate bars.  Then we stopped at the Canadian Tire in Deep River to get some locks for the trailer hitch.  I would hate to wake up some morning and find the trailer and enclosed motorcycle had wandered off.  Sandy also put my foam rubber kneeing pad on the floor in front of her because she found the Contour floor  mats were uncomfortable under bare feet.  We had lunch at the Big Irving station in Pembroke.  Irving is a brand of gasoline common in the east.  We split the special, a turkey salad wrap with hamburger macaroni soup (me) and a salad (Sandy).  The shared order was just the right size.

Approaching Ottawa, we cut south on Highway 416.  This was better then going on to Cornwall because it is all four-lane, we didn't have to go through downtown Ottawa and the border crossing at Ogdensburg is quieter. 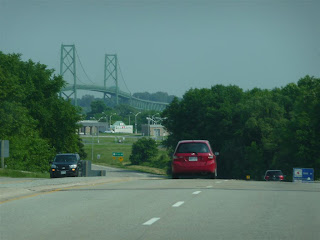 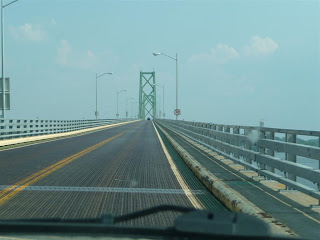 Yes, it is almost one mile of steel grating 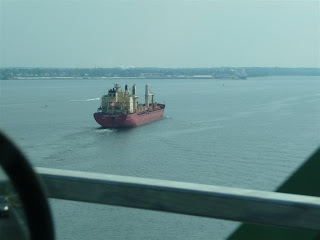 There was no waiting when we arrived at US Customs.  I held the NEXUS cards up to the scanner as we approached the booth.  The agent asked us if we were James and Sandra and we acknowledged we were.  He asked where we were going and for how long.  Then he asked me to unlock the trailer and looked inside.  That was it and we were on our way.  I like being treated like a regular person.

We slipped into Ogdensburg for gas.  With the hills, headwinds and sometimes brisk pace, we only got 13 miles per US gallon on this leg.  That square front trailer isn't big but it doesn't help, either.  At the Valero station, I saw a sign explaining how the Zip Code thing works for Canadians.  Anyone who reads this blog regularly already knows this but I have never seen it posted before. 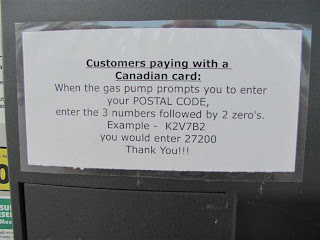 One thing I noted as we continued along the St. Lawrence was the difference between Ontario and New York despite just one narrow river separating them.  House construction is different here with more wood and less brick.  The yards are large and mowed and there don't seem to be any ditches along the road.  It just feels different on this side of the border. 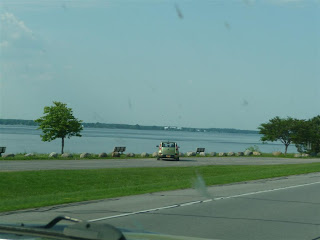 The St. Lawrence and Canada

We arrived at the Super 8 in Massena.  Checking in, the clerk had to manually enter my card because his reader didn't like it.  Then he said that it was declined.  After a call to VISA, they explained that he had entered the wrong expiry date.  Aha.  I am not cut off:-)  I parked the outfit where he directed me, hopefully out of the way of others. 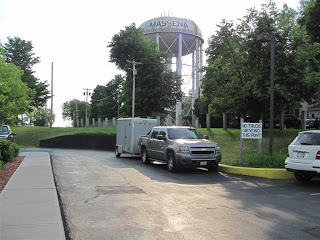 Parked at the Super 8 - Massena NY

We walked across the street (actually the four lane Highway 37) and found the new Vino Vidi Vici (Julius wouldn't be amused) restaurant.  This replaced the Italian On The Run around the corner and is serving both menus.  We split a Hawaiian pizza and ended up bringing half of it back to the hotel. 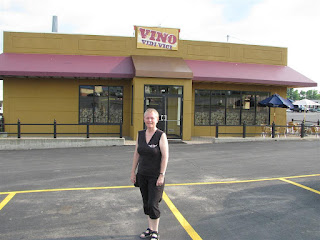 Sandy at the restaurant 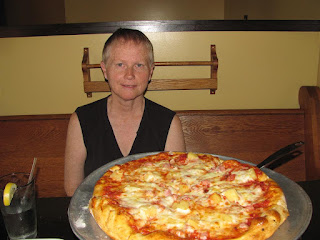 
Back at the hotel, I sorted my trailer keys and locked the trailer on. Then I posted my bills and worked on the blog.  We did have a small but very nasty storm come through about sundown as I had expected due to the east wind.  When my chores were done, I hit the hay.

I'm sooooooooo hoping there is a motorcycle in that trailer. Nice looking rig Skid. Hope to see you in Virginia later this year.
Daley VROC 1283