It was an overcast but comfortable morning in Massena. We ate continental breakfast without too many people crowded around and then set out for Ogdensburg where we fueled at the Valero. Prices were down about $0.15 per gallon from last week. The bridge crossing was very quiet and the Canadian CBP agent welcomed us home without anything more than a cursory look.

I called Paul from the Canadian side and he said he hadn't spoken to the dealership yet so we went on up to his house near Merrickville. Getting off the 416 at Kemptville, I was very impressed by the growth.  A Walmart, Staples, Canadian Tire, two Tim Horton's and three traffic circles.  Wow. We continued on to Paul's and found he had made the arrangements with Kanata Honda for tomorrow.

We drove to Kanata and found the dealership, located on a little circle next to Scotiabank Place. This was built just for the numerous dealerships that dot its perimeter. There we met Curtis, the service adviser Paul had been speaking to.  I unloaded the bike and moved it into the building and then unhooked the trailer and left it in the lot. Since I was planning on a new tire anyway, we decided they should install it now because their price was good and the labour would be negligible. 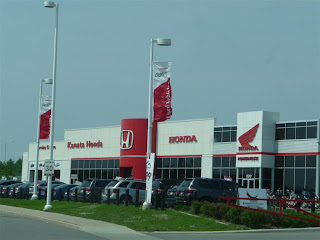 Kanata Honda - cars, bikes and anything else Honda makes 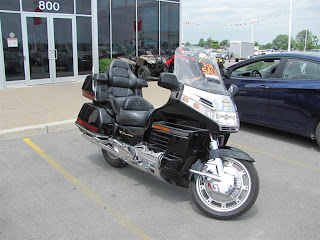 We left the dealership and, after one false start, found a McDonald's in Nepean. It was undergoing some renovations but we got a table and hooked up to WiFi. After lunch, we explored McFlurry's and found they were pretty good. We called Diane, a friend who lives here, and left a voice mail. Then we went to the Days Inn across the street and booked a room, even though we wouldn't be able to check in for another hour. I did remember that I usually avoid Ottawa due to outrageous hotel prioces.

Driving around, we found Parliament Hill and the Canadian War Museum. Although we pass through Ottawa regularly, I can't remember the last time we have stopped to explore the landmarks and the seat of Canadian government. Some day, we will have to do just that. We followed the Ottawa River Parkway along for a ways before deciding it would be after 3:00 PM by the time we got back to the hotel. Curtis had called  to say that the front brake pads were getting low on the bike and we could change them without any labour cost. I called back and said to go ahead. 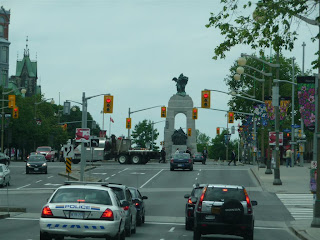 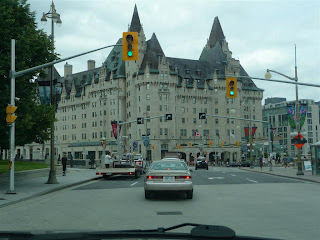 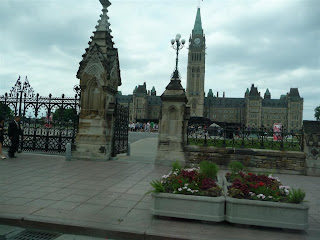 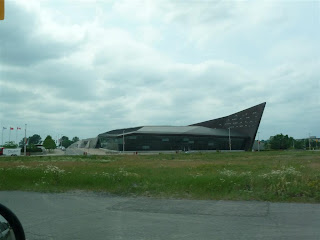 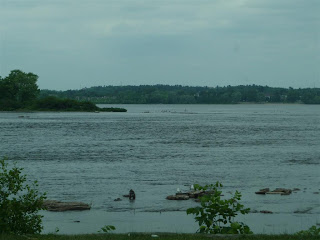 Back at the hotel, we got checked in. Our room, once part of a suite, was on the 6th floor and had a Jacuzzi tub. I worked on blog entries and photos for a while until Diane called and we agreed to go out to supper. I also called Tom at PROLine and ordered the 7 1/2 x 14 trailer with a planned pickup date of July 9th.

Diane came up to our room and we visited for a while until we felt hunger pangs.  Then she directed me to a mall where a restaurant named Chances R was hidden in a corner.  Casual but classy, it was a nice place to eat. 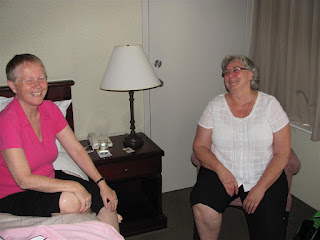 Sandy and Diane in our hotel room 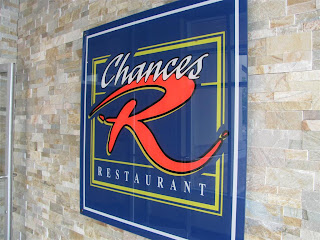 A good place to eat in Nepean

After supper, we went back to the hotel and visited for a while more before Diane had to leave. I didn't stay awake for very long after that. I hope we can get everything done and get home tomorrow.