It was another bright, clear morning in New Hampshire with a forecast of good weather through the weekend. I can't underscore just how unusual this is in our NEVROC history. Led by Ol' Phart, we headed down to The Circle Restaurant located at (you guessed it) the Epsom traffic circle. Karen followed in the truck because she wouldn't be joining us on the ride afterwards. At the restaurant, we met Steve, Lucky Al and Brother Bear. 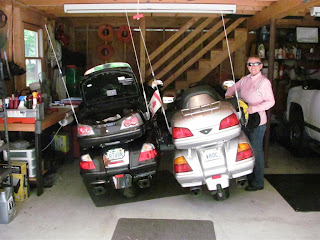 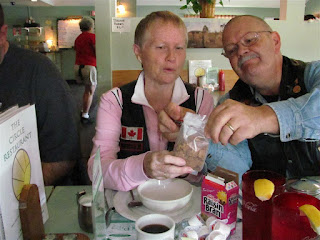 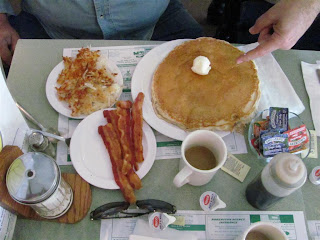 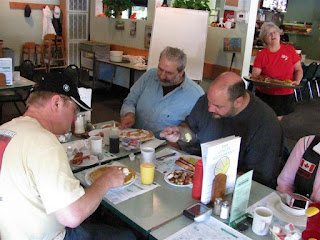 Brother ear, lucky Al and Steve chow down
(note our more than capable server in the background) 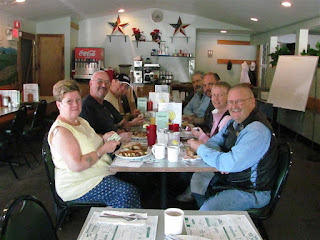 The server took this group photo 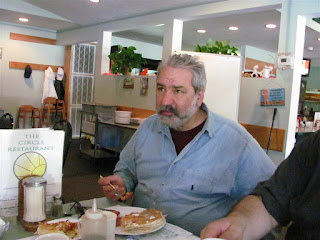 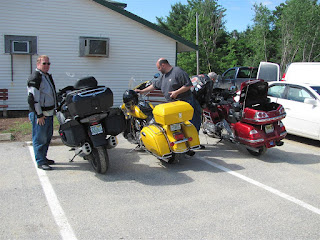 B. Bear and Steve getting ready to ride

The breakfast was just fine.  Once it was done, we set out on the first quest of the day, one of mine.  The second part of our new travel strategy, as mentioned previously, is a trailer that will accommodate two bikes up to and including a pair of Wings.  I was intrigued by the PROLine website and their 90" enclosed double axle motorcycle trailer.  They custom build and sell direct from the factory, which is located fairly close by in Milton, NH.  I punched the address into the GPS and led the way.

Arriving at PROLine, we went inside and met Tom, the owner.  We talked trailers for a bit and then he took us to the warehouse to see some finished trailers waiting to be picked up.  He moved one trailer to show us something by pushing it with two fingers.  Then we went through the factory seeing them build the frames, walls and roof.  When they said all-aluminum, they weren't kidding.  I was suitably impressed.  B. Bear managed to score a trailer door latch for a very good price.

Back in the office, we sat down and Tom worked up an estimate including the options we wanted like a spare tire and interior mount, window and screen, RV door and screen, Condor chock and tie down loops.  It isn't going to be cheap but I certainly expect it to be nice.  We didn't order right there because I was still unsure whether it should be 6' 1" or 6' 6" high inside.  When I do call, it will be ready for pickup in about three weeks. 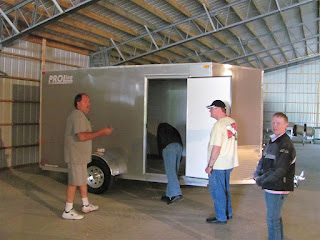 When we were done at PROLine, Joe decided that his hips and knee were troubling him enough that he wanted to head back home.  Brother B., took over the lead and took us north on 16 and 153.  There we fell in behind four HD riders who were flowing through the curves at the speed limit or less.  Unfortunately, there were no places to pass along that stretch.  I applauded the slow group for not exceeding their limits but wished they had learned the first rule of motorcycle etiquette on curvy roads.  Move over and let faster bikes get by!

Near Province Lake, the whole line caught up with an even slower utility truck.  Suddenly, there it was.  A short straight stretch with a dotted line.  The order was BB, Steve, me and Lucky Al.  All of us except Steve had CB's.  BB hauled that six cylinder BMW into the other lane and showed us what 160 HP looks like in passing mode.  Steve grabbed some gears on the Nomad and tried to convince it to go too.  I started and then backed off to avoid leaving tire tracks all over Steve. He eventually got clear as the passing spot ended.  With Ron calling all clear on the radio, Al and I kept passing around the corner and over the rise.  And then we were free. 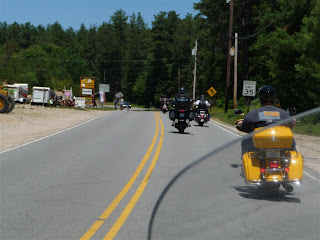 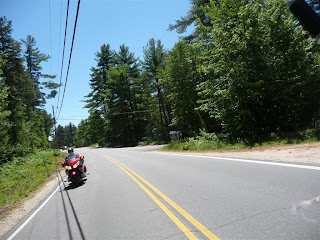 Luck Al runs over a shadow 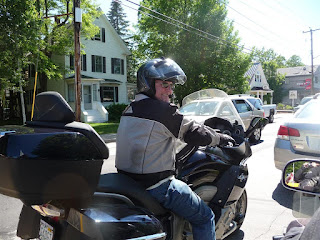 Ron led us on to Whitehorse Gear in North Conway where we browsed while he bought some electronic doodads.  Then we went to a restaurant in town called the Muddy Moose.  Food was good, service was great and BB only spilled one Coke all over the table. 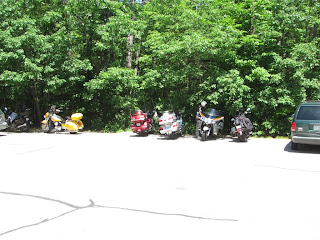 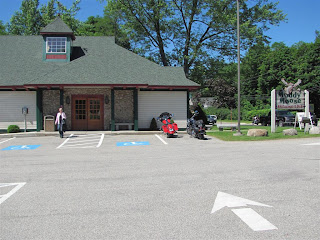 Someone familiar leaving the Muddy Moose

From the Moose, BB said we would take the Hurricane Mountain Road.  I don't know who called this a "road", but they were being generous.  It seems that they laid 1.5 lanes of asphalt down without any base preparation whatsoever.  It looks like a paved goat path.  And up we went.  When we came to the top, we went down the other side making me wonder why the road was there in the first place.  But it was interesting.  I would love to run it on a sled in the winter time.

At the end of Hurricane Mountain Road, we headed south on Green Hill Road.  This was much rougher than HMR but was level.  Back in North Conway, we took 16 to 28 on a straight run back to the campground.  I  don't know what idiot thought that the intersection of 28 and 109 in Wolfeboro should involve a stop sign at a T intersection at the top of a hill, but I am not a fan of his.  It cost us some time as traffic was backed up for a ways.

The rest of the ride was uneventful and we got back to Lazy River to find that people had been arriving while we had been wandering.  First time Laconia attendee Badger and Mitch Pittman was in from Arkansas with Buf.  Her Mom Babe was there as well.  We hadn't seen her in some time.

The group was split on supper.  U-Turn, Ari and the kids had arrived at Joe and Karen's from Boston and they were all headed over to the Longhorn in Concord.  I led a decent sized group that way while Bobcat took another section to a much  closer Italian place.  I had a filet mignon and, while I usually really like the beef at the Longhorn, this one had an odd texture.  It was also way more done that than the rare I had requested.  But, after pointing this out, I ate it because it had taken so long to get it I didn't want to hold everyone else up.  So the food was a disappointment but the company was excellent. 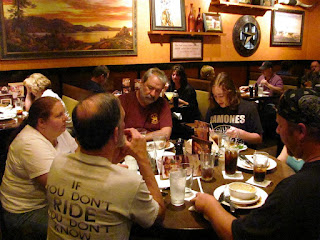 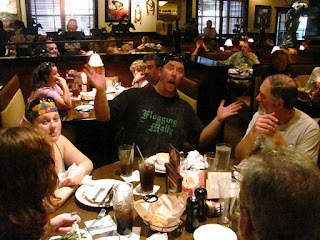 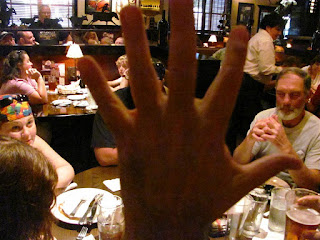 Lucky Al gives everyone a hand 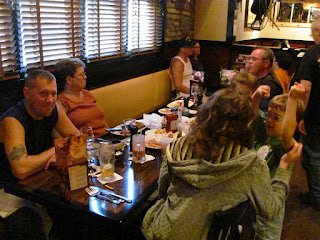 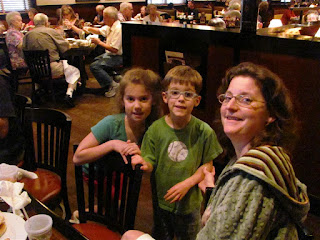 After supper, we headed back to Joe's where Sandy stayed while U-Turn and I headed back to the campground on the bikes.  We hung out there for quite a while, finally heading back to the house about 11:00.  It was a cool ride back.  Surprisingly, Sandy and Ari were still up when we got back. 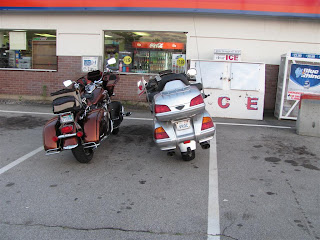 Beer stop at the circle 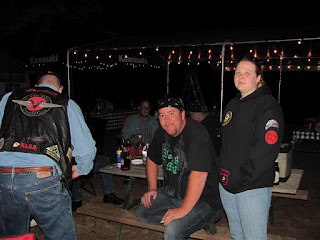 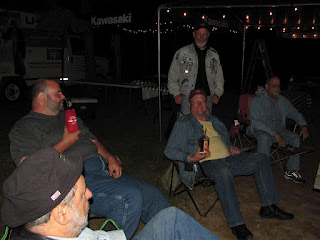