I called Kanata yesterday and found the ordered part had arrived and was being installed.  It was a small part called a Seal Back Up and cost just over $7.00. I had also called Curtis the day before to specify that the front end should be lowered on re-assembly by sliding the forks 10 mm up in the triple tree to offset the increased length due to the heavier Traxxion springs. I was concerned  that this might not have been clear in the instructions, having tried it with the forks in the stock position and found it wasn't as stable.

I had asked Leo if he would go with us as co-driver. We picked him up at 6:00 AM and headed east, stopping at Tim's for breakfast-to-go on the way out of town. We stopped again at Tim's in North Bay before continuing east on Highway 17. The traffic circle in Mattawa was finished although the long one lane stretch east of town was still there.  The flag lady let us go ahead so I was surprised to see a loaded log truck bearing down on us at a good clip as we were moving.  I checked up and avoided him, realizing there had been some mix-up by the flag people.

We stopped in Deep River where Leo took over the driving. Just outside Kanata we stopped at the Carp exit for fuel, noting that the $1.15 per liter prices was way below the $1.25 Sudbury price. Leaving there, we saw many police, fire and emergency vehicles heading towards a plume of smoke south of the highway. We never did figure out what it was. 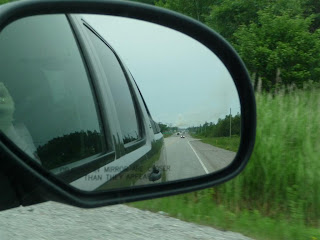 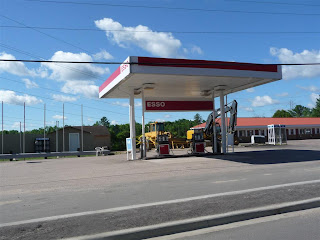 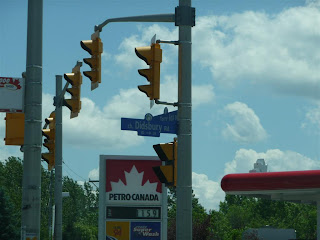 We arrived at Kanata Honda just before noon. I had told Curtis we would be there about 1:00 PM because I thought we were making a delivery to Orleans but that was cancelled. When we got there, he was still at lunch but the bike was in the service area. They had cleaned it up nicely, a pleasant surprise, but a check of the fork tubes showed they had installed them in the stock position, not the one I had specified.

When Curtis arrived, I pointed this out to him. He told me that he had not passed the message on to Peter the mechanic because Peter had the official Traxxion instructions. But he was now on lunch and would not be back until 1:00, so we went to a nearby Subway to eat. It took some effort to find the retaurant because it wasn't where the GPS said it was.

When Peter got back and Curtis called him to come out and talk to us, I found myself facing an older gentleman. My perception of him was that he is methodical, conscientious and precise. He took exception to my telling him that the re-assembly was not as per Traxxion practice and showed the written sheet that said "re-assemble as per Honda instructions". And, given that Curtis had NOT given him my instructions and what the Traxxion guide said, he had every right. It took me some time to find the written directions to alter the fork position on the Traxxion website but I did. The problem now was that Peter wanted to take the whole front end apart to change it and he had a bike on his lift that was unable to be moved. Because it was now 2:00 PM, I said we would get it fixed at RL.

Based on my experience, I would trust Peter working on my bikes. The problem was with Curtis, the service adviser, who thought he knew more than he did and did not pass on the customer's (my) request. Also, as a Honda shop, when he suggested new brake pads without specifying type, I thought he meant OEM Honda pads. Instead, I find I now have EBC pads. Oh well, we'll see how they do.

We hooked the trailer up and loaded the bike. Then we headed northwest into the afternoon sun. There was nothing to note on the way back and we arrived before sundown. I had to move the motorhome and the van out of the driveway so I could back the trailer in and unload the bike. Then I maneuvered the trailer to its resting spot, put the RV back and parked the truck, leaving the van on the street. It was nice to note that backing the trailer up with the truck was much easier than with the van. The last thing was to drop Leo off at home with many thanks for his help today.