We woke up this morning in no rush. Paul wasn't going to be at the dealership until 10:00 AM so we moved at a leisurely pace. The breakfast room was on the first floor but Sandy was disappointed, considering the room rate, that the selection of items was a little sparse. I did note that this seems to be a popular place for seniors' bus tours.

Back in the room, I caught up another day in the blog before we checked out and headed to Kanata Honda. We arrived about 9:30 and checked in with Curtis, who directed us to a comfortable waiting area with leather seats and a TV. I finished the last of the blog entries using the Rocket Stick since the dealership Guest WiFi wasn't working.

About 11:30, I noticed that we hadn't heard from Curtis and headed off to find him. He was in a meeting but someone else confirmed that Paul was in the shop and they were plugging away at it. I hate not being able to see what is going on. This proved to be a valid concern because Curtis eventually came out to bring us some unexpected news.  They found the cause of the seal failure.  On dis-assembly, the mechanic found that a part had been left out the last time the fork was put together.  To make matters worse, the only part they were able to find was in Vancouver and would not arrive until Thursday. I wanted to talk to Paul about this but it seems he had already left. Since this was his error, I would have respected him more if he had faced us instead of going out the back door.  On the plus side, this seal has failed three times so I hope this discovery will be the end of the problems.

There was no way we were going to hang around for three days so we told Curtis we would head back to Sudbury and come back down on Friday to retrieve the bike.  This is one benefit of our new WHORE (We haul Our Rides Everywhere) lifestyle. When the  bike is down, we are  not stranded. I will need to re-evaluate who my suspension expert is going to be. Curtis assures me the mechanic at the dealership, Peter, will be able to handle the work in the future.

The trip home was largely uneventful.  Along the four lane 417 out of Ottawa, we found the Avalanche is quite comfortable cruising along at 80+ MPH. From Arnprior, where the two lane starts, to North Bay there are a great number of construction zones with flag persons. Passing through Rolphton, we saw that the Esso station where we had stopped to use the bathroom and I had gotten coffee on the way down, had burned to the ground.  I also saw my first Chevy Volt in Mattawa.

Satellite radio was interesting. This is new for us. It kept my blood pressure going listening to Charles Gibson on Fox News as he advocated that  Chicago adopt the "stop and frisk" initiative New York was already using. It pains me when I hear a so-called conservative who has no concept regarding the protections against arbitrary searches contained in the Constitution. But I'll end the libertarian rant there before I get carried away. 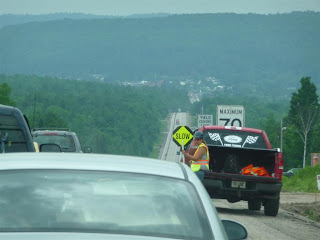 Flag person on Highway 17 looking down on Mattawa 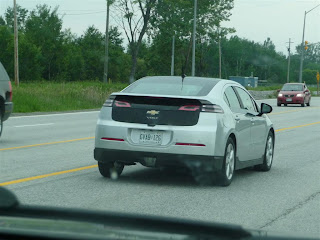 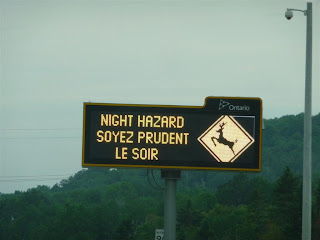 As we were leaving Sturgeon Falls, we cane upon the scene of a house fire right along the side of Highway 17. Fire and emergency vehicles had the highway blocked so we  were directed onto a detour. Unfortunately, as has happened before, the side road they directed us onto ended at a stop sign at a through road. The through traffic wasn't stopping and we might still be there if a Sturgeon Falls policeman hadn't arrived and started to direct traffic. 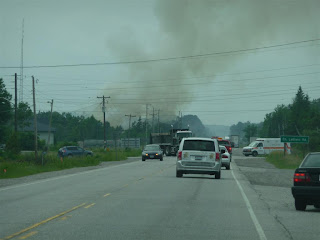 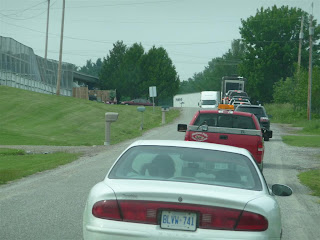 The last fifty miles went smoothly except where we found work crews laying tar snakes in Municipal Road 55 on the east side of the city.  This road was just finished a couple of years ago and I have to wonder what deficiencies in the construction have caused it to come apart so soon. Motorcyclists hate tar snakes because they are slick in both the wet and the heat.  As a taxpayer, I am not impressed.

There was a rude surprise for us when we pulled into the driveway. Someone appeared to have thrown some liquid substance at the motorhome while we were gone.  The container seemed to have hit the windshield and broken open, splattering the glass and the underside of the overhang. It was red and sticky but, luckily, washed off quite easily.

Other than not returning with the motorcycle, the first  trip with the truck towing has been a resounding success. The truck was comfortable and pulled well.  It also appeared to have gotten 19.5 Miles Per (US) Gallon without the trailer, cruising mostly at 10 KPH above the speed limit.  I was happy with this. I am looking forward to covering many miles at the wheel of this vehicle, hauling the Wing to many great riding spots across North America.