It was overcast and cooler this morning.  We were slow getting down to the continental breakfast so the little room and couple of tables were packed.  The room opened at 5:00 AM so we should have hit it when we first woke up.  As it was, we took some food back to our room.  Sandy, master packer, found that she forgot her toothbrush at home so we added a shopping stop to our itinerary.

We were on the road by 7:40.  Just outside town, I missed a GPS prescribed turn while passing a slow truck and had to find a place to turn around and go back.  This put us on 37C, a back road that shaved a few miles off staying on Route 37, and we got to see some interesting sites.  Outside Bombay, a sign warned that there were 7 1/2 miles of rough road ahead.  They must have different standards because we would class this as pretty good back home. 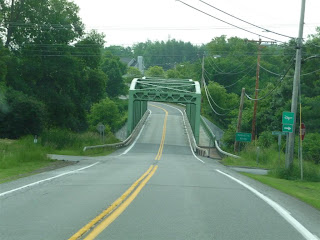 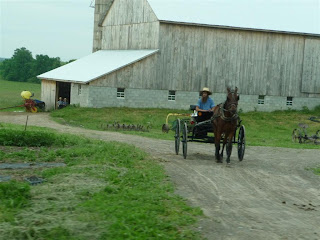 Eventually, we rejoined Route 37 just in time to take the 122 cutoff through Constable. Back on 37 near Chateauguay, we saw that the new wind farm had expanded to the south side of the road.  This has been growing by leaps and bounds the last few years and we saw several new towers under construction. 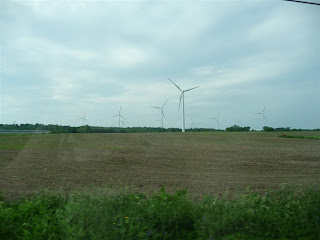 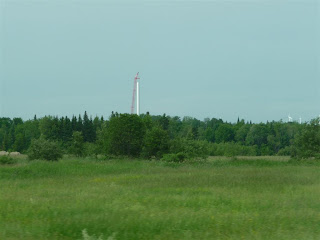 Near Ellensburg, the road was down to one lane as they stripped and resurfaced the road.  Then some bridges were single lane as they were being refurbished and,  at Rouse's Point, the bridge to Vermont was one lane due to rehab work. Lots of infra being structured these days. 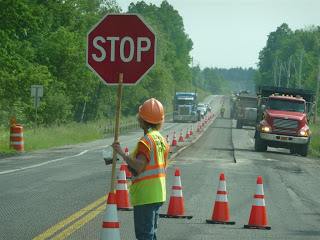 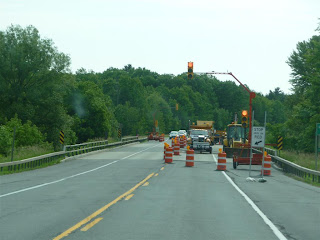 Bridge construction on Route 37 in NY 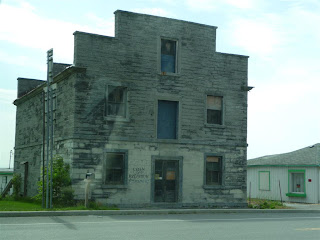 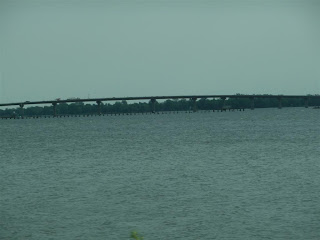 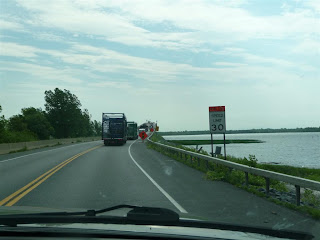 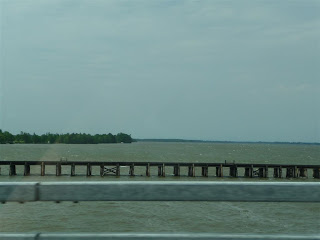 In Vermont, the first thing we saw was a Mobil station with gas at 3.72 per gallon.  This compared favourably compared to Champlain NY where a sign advertised $3.93. We cut straight across to Interstate 89 and followed it south.

In search of the elusive toothbrush, the GPS took us to a Walmart in Williston. Without the device, we would never have found it nestled way back in a serene but remote setting.  This wasn't a Supercenter, it was just a small, friendly neighborhood Walmart.  But it did have a toothbrush, some snack items and a case for my US cell phone.

Before returning to the highway, we stopped at Staples looking for accessories for Sandy's new Galaxy Tab 10.1, specifically a USB interface, a HDTV interface and a Samsung case with Bluetooth keyboard.  As at home, not a thing to be seen.  On the way out, we saw a Best Buy and paid them a visit, finding the USB piece but nothing else.  The Galaxy is great and very highly rated and yet these advertised enhancements are impossible to find. Seems like someone is missing a marketing opportunity.

Down the road, we tried to stop for lunch at a Subway in Waterbury but were unable to get parked on the narrow streets.  We continued on to the Randolph Town exit where we managed to park at a McDonald's.  The weather radar showed the dark clouds southwest were bringing loads of rain.  The nice thing about the truck is that we did not need to don rain suits. 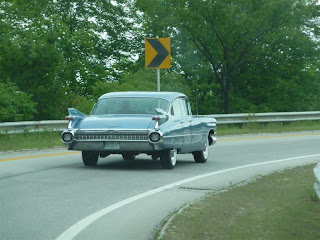 Entering New Hampshire, we saw fuel at $3.59 per gallon.  Things keep getting better.  I had to stop at a Rest Area and walk around a bit.  I'd been fighting fatigue all day.  Usually, this passes and I get my second wind but today was different.  Better to take a break and be safe.  Arriving at the end of I-89 in the Concord area, we cut north on I-93 for a couple of miles and then took the streets to Ol' Phart Joe and Karen's house in Pembroke.  Saw another Mobil at $3.47.  Better and better and better.

At Joe and Karen's, we unloaded our gear and the bike before parking and unhooking the trailer. They were  kind enough to let us stay at their house after we found we no linger had any camping options.  We caught up on who has been doing what and had hamburgers Joe grilled along with salad for supper.  Finestkind, as the Mainers would say.  Tomorrow, we head to Lazy River Campground to set up the Kaw Pasture so, still tired, we turned in early.