Today we set out on a road trip to pick up our new two-place enclosed motorcycle hauling trailer in Milton, New Hampshire. Then we will tow it to Swanton, Ohio (near Toledo) to enjoy a party thrown by Boomer. This has been an annual event for several years but we haven't made it to one yet.

The first thing this morning, I called and reserved a room at our usual Super 8 in Massena, New York. Then I checked and made sure my E-Z Pass account was still valid and added the truck. I called their Customer Service Center and talked to an Asian man named "Rudy" who assured me I could just tow the trailer through the E-Z Pass lanes on the Thruway. Then I checked all the available on line information which says I can't. I'll need more than Rudy's word on this because I hate Violation Notices.

As I was loading the back of the truck, I pondered just how much junk we carry these days and wonder where the super efficient motorcycle packers have gotten to? Chairs and clothes and shoes and tools and all manner of things. Oh well, if you have the space, use it.

As we hit the road, it was again evident that blueberry season was in full swing based on the number of cars parked along the side of the highway as the occupants were picking in the bush. Then there were the cars parked on the side and selling the berries. This is a traditional northern summer pastime.

We stopped at Tim's in Sturgeon Falls so I could get a breakfast wrap. I skipped the zesty sauce because it was hot enough to be uncomfortable when I accidentally tried it last time. Construction east of Mattawa was less intense and centred around a stretch near the old Breton's truck stop. There were also some stretches between Petawawa and Arnprior. For rant purposes, gas was $1.22 per liter in Sudbury, $1.17 in North Bay and $1.15 in Renfrew. Nothing new here.

Leaving Arnprior on the four-lane, we were passed by and then passed a cruiser motorcycle with a couple on it. The passenger was a tall young lady with blond hair and a white T-shirt that accentuated her curves. She looked comfortable with her bare arms in the breeze but all I could think of was skin grafts. I guess I'm becoming an old fuddy duddy. Not ATGATT, but reasonable protection is my goal.

We crossed again at Prescott/Ogdensburg. There has never been a traffic back up here so I like it despite the 1.5 kilometer steel grate bridge. That doesn't affect the truck much, anyway. This border agent was a hoot. His first question was "What have you been doing in Canada?". "Living there." was our reply. Then he asked about our US visit so we  told him we were getting a new trailer in New Hampshire. He wondered where the old one was. Then he asked how long we would be visiting and I said a week. A week to get a trailer? No, we were going on to Toledo for a party. He thanked us for having interesting answers and sent us on our way. This is much more fun than the old days even if I do know he was watching our responses to atypical questions.

We arrived at the Super 8 in Massena just after 4:00 PM. Based on a talk with the desk clerk, we drove into the village for supper at Spanky's. We both tried their new prime rib melt on Texas toast with home made fries. Based on questions, we found some people prefer frozen fries. Go figure. It was excellent and, after bringing our, our server got one for herself. 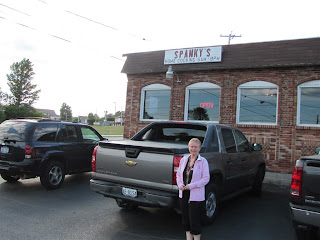 After supper, we returned to the room where I worked on blogs and posted receipts to Quickbooks. Then I checked on line and found Sanford, Maine was about as close to Milton, New Hampshire as we were  going to get so I called and reserved a room at the Super 8 there. Just after I hung up, Sherm called from the Arizona desert where he was waiting for Wrong Turn and KT to arrive from the Hoover Dam. It was good to talk to him.

We turned in fairly early.