The weather man said it was not going to rain today so we didn't shoot for an early start. I checked the tire pressures and found they were one pound over, about what I expected for the 1,000 foot increase in elevation from home. 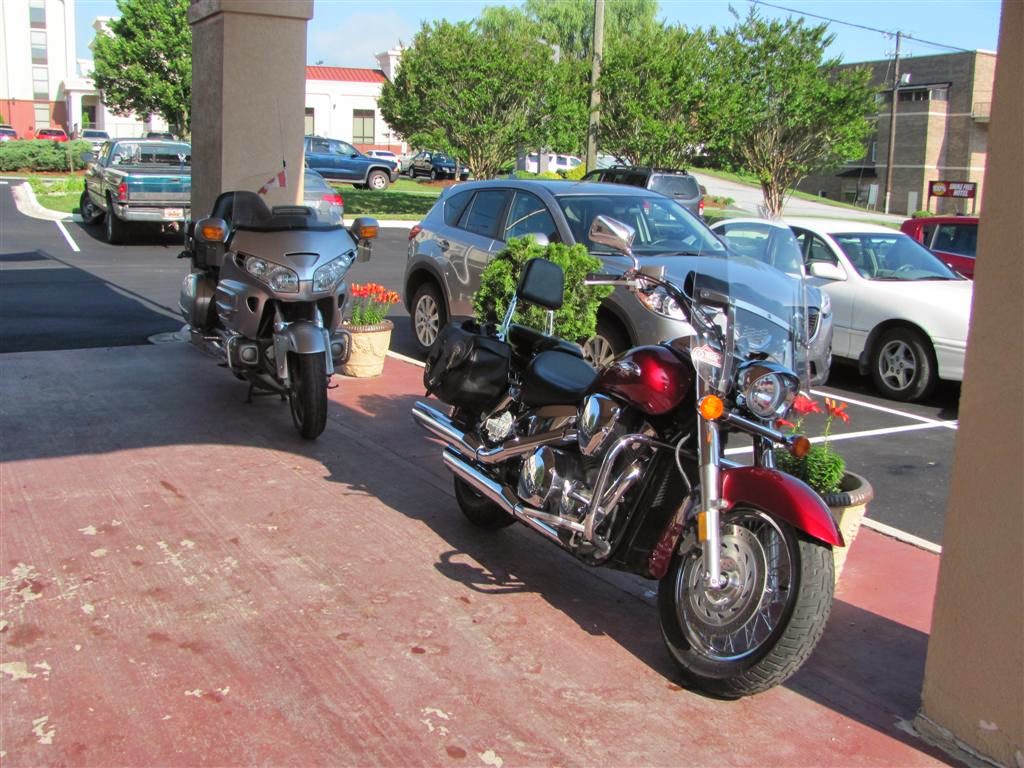 Those of you who have followed this blog for a while know that I have an interest in model railroads and that we visited the Apple Valley Model Railroad Club here in Hendersonville a few years ago. The 100' x 22' layout models this area and is located in the old train station, but it is only open to the public on Saturday from 10:00 AM until 2:00 PM. Gary expressed an interest so we rode over there to start our daily ride.

While taking the photos of the exterior of the station, I rubbed my ear and lost the back off my earring. Just try to find something like that on a brick road. I'll need to get a new one.

The ladies weren't too interested but Gary and I prowled the various segments and took some pictures. Dan Lang, the doctor who went to school in Toronto, was here again. He is heading back to Stratford soon for a visit. 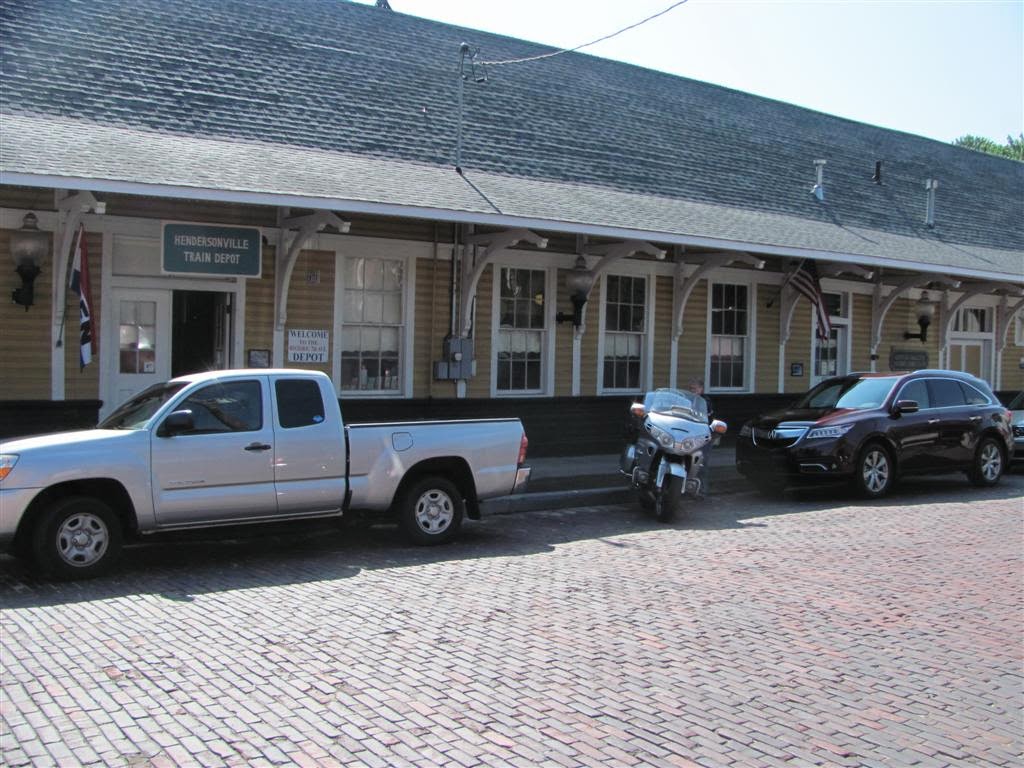 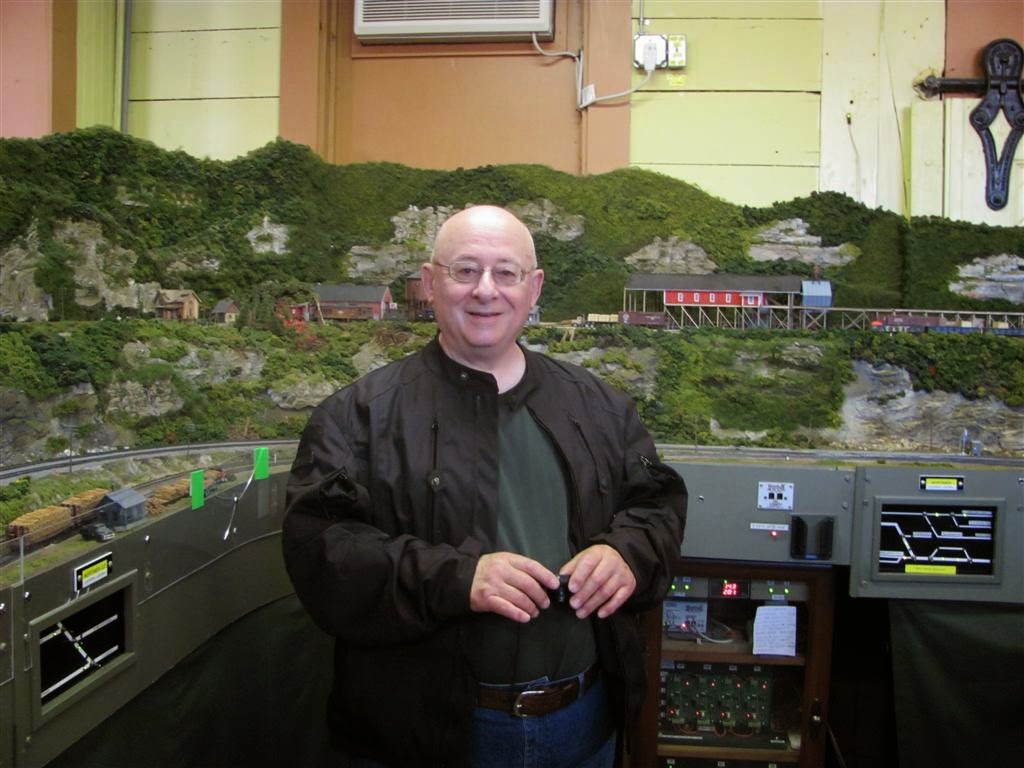 A different view of the mountains 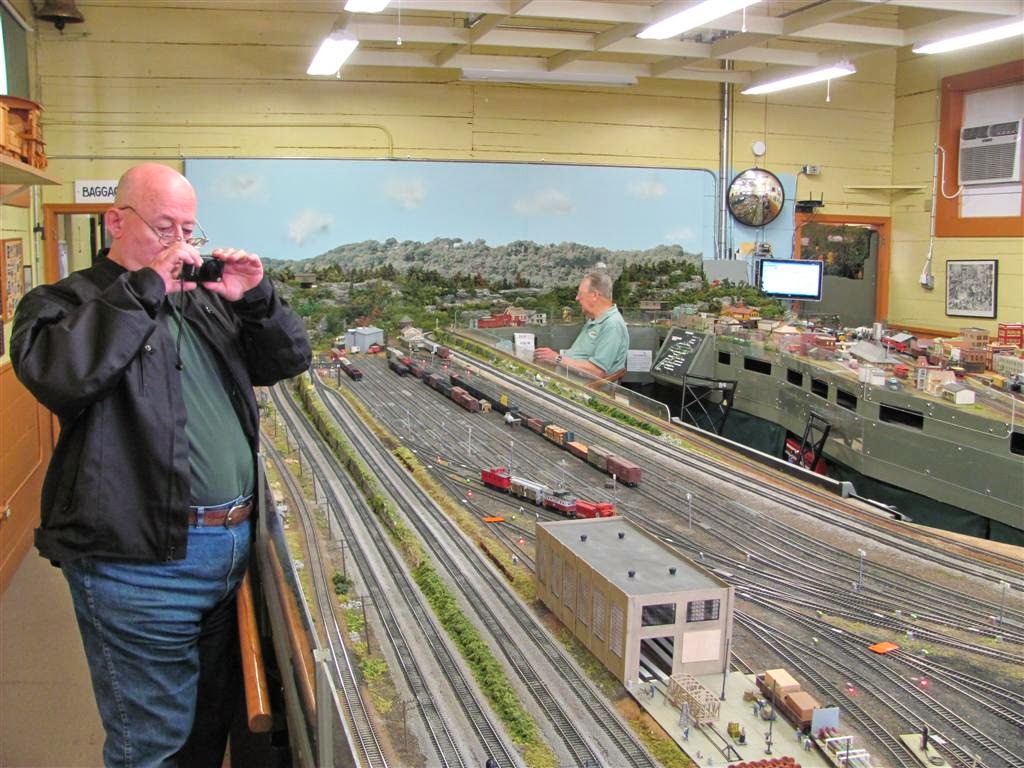 No shortage of yard space 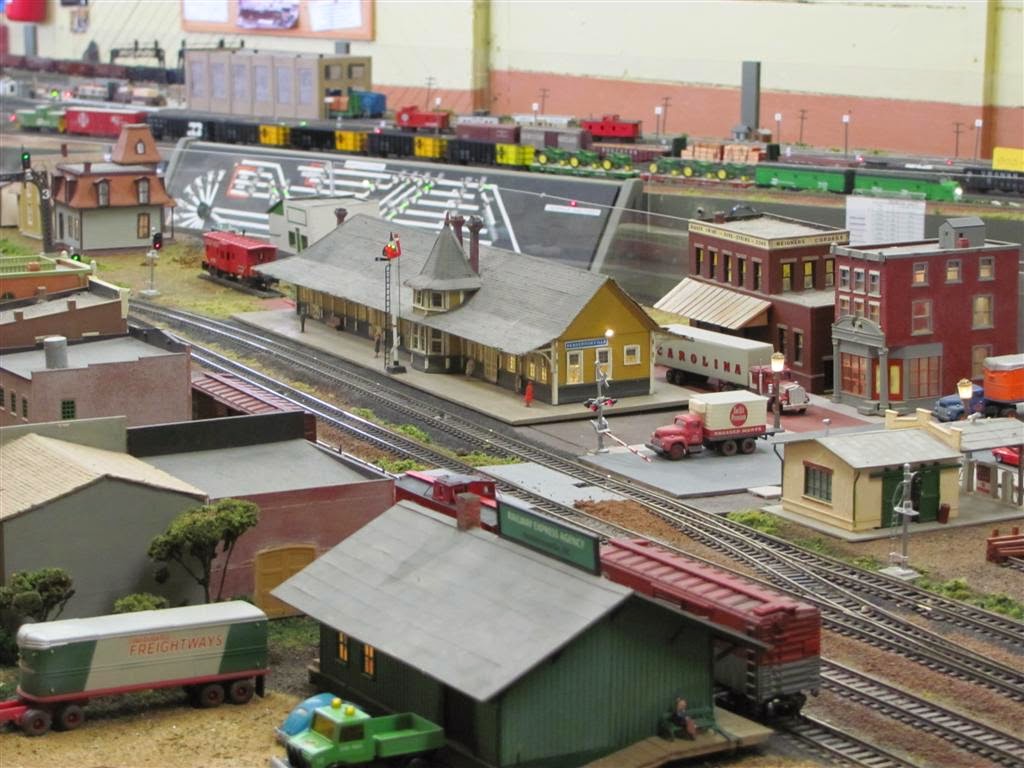 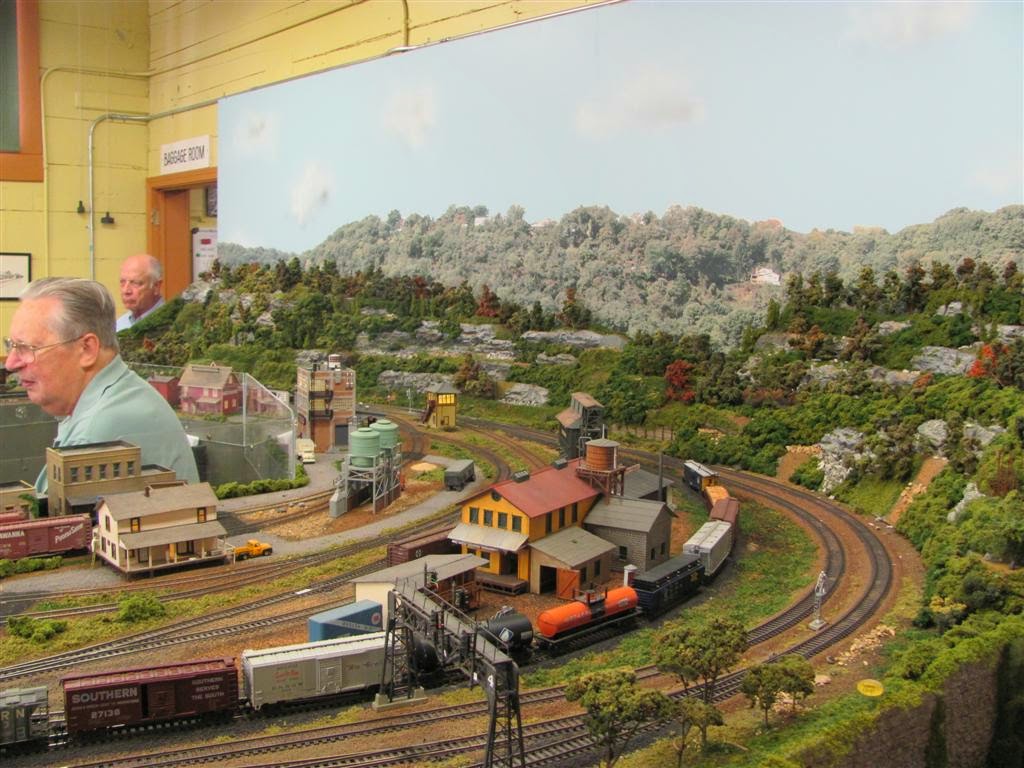 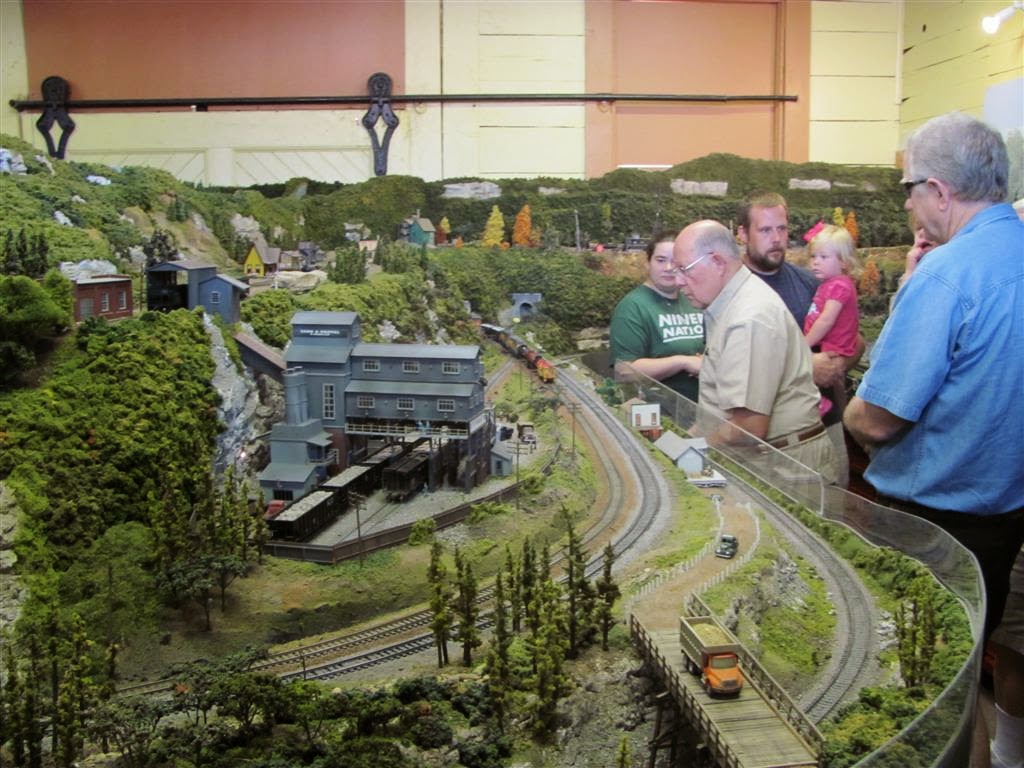 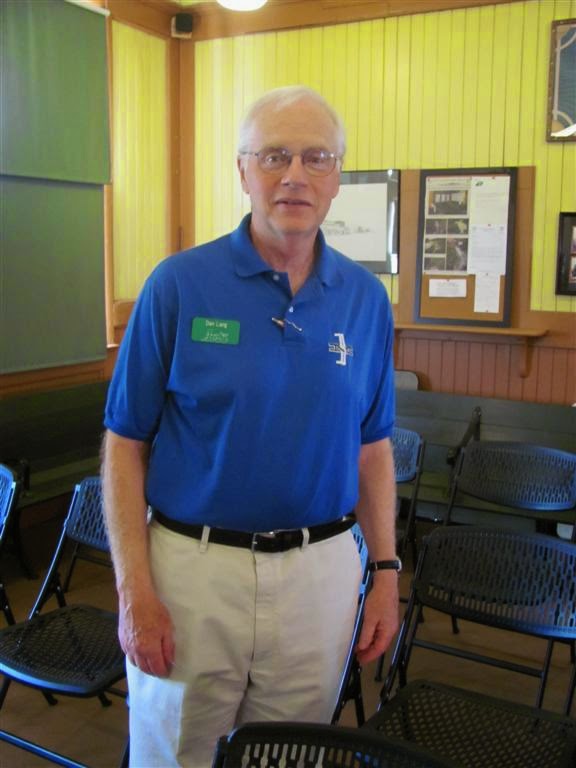 The next goal for the day was Mount Mitchell, off the Blue Ridge Parkway. We left the station as the temperature was rising. The GPS took us onto I-26 West (north) and led us off onto US 25. Instead of taking us straight to the BRP entrance on US 25, the demented device led us diagonally across the south of the city before hopping us on and off I-40. We got on the Parkway at the same place we exited yesterday.

We stopped at the BRP Visitor Center. I've never been in this particular facility before. It is very nice and the lady at the information counter went out of her way to give us information on good motorcycle roads. Sandy went back out to the bike and got my National Parks Passport so I could stamp it. 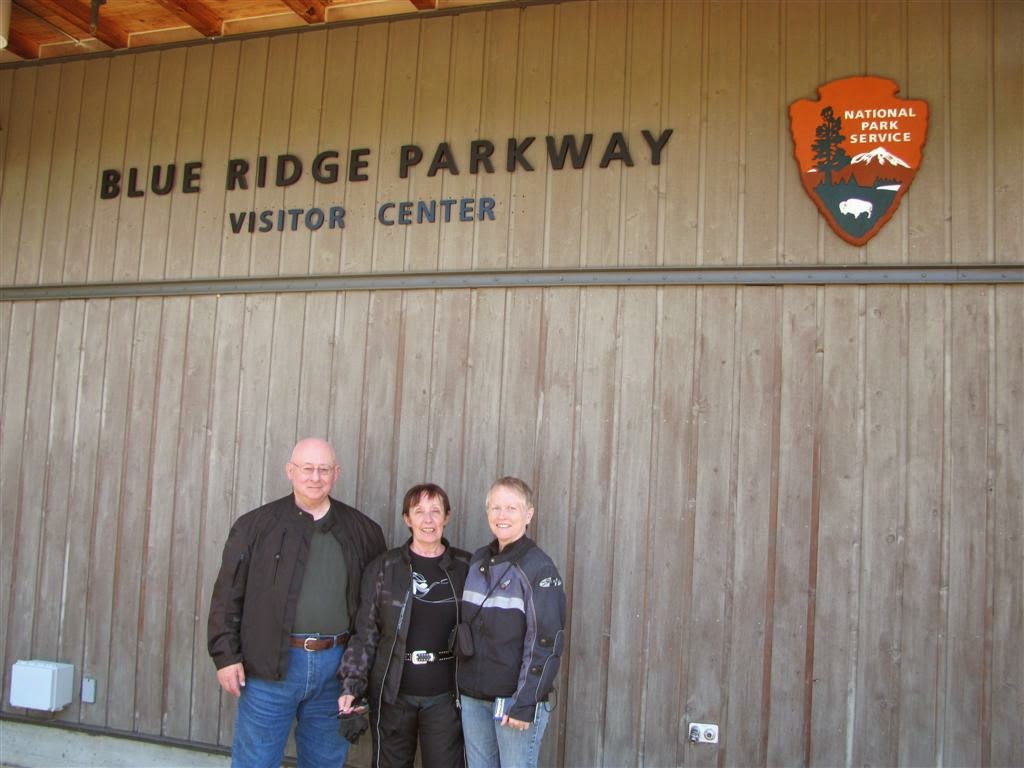 On the Blue Ridge Parkway

It was 29 miles to the Mount Mitchell exit. The Parkway speed limit is 45 MPH but traffic is usually doing less than that. I took it easy and didn't even get bothered when a flatlander from Florida putted along at 30 MPH, braking to 25 for every curve. OK, I got bothered but not as much as usual. You think that someone would look in the mirror, see a line of vehicles behind them and pull over at one of the many paved overlooks. We made one such stop to allow some faster vehicles by. 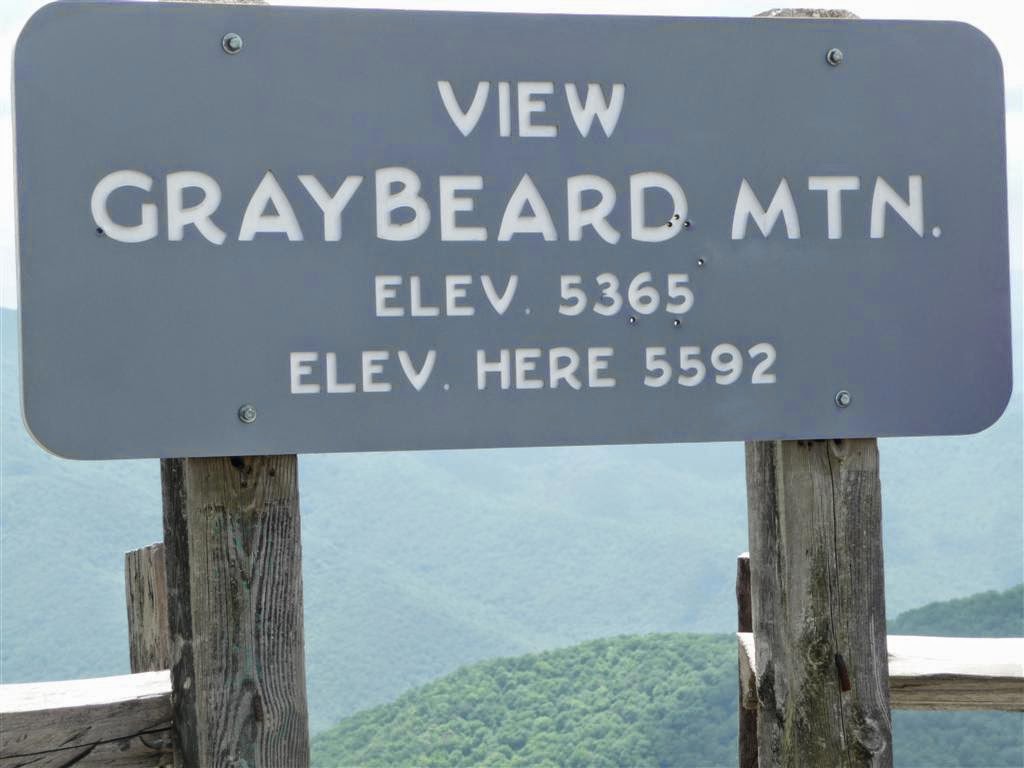 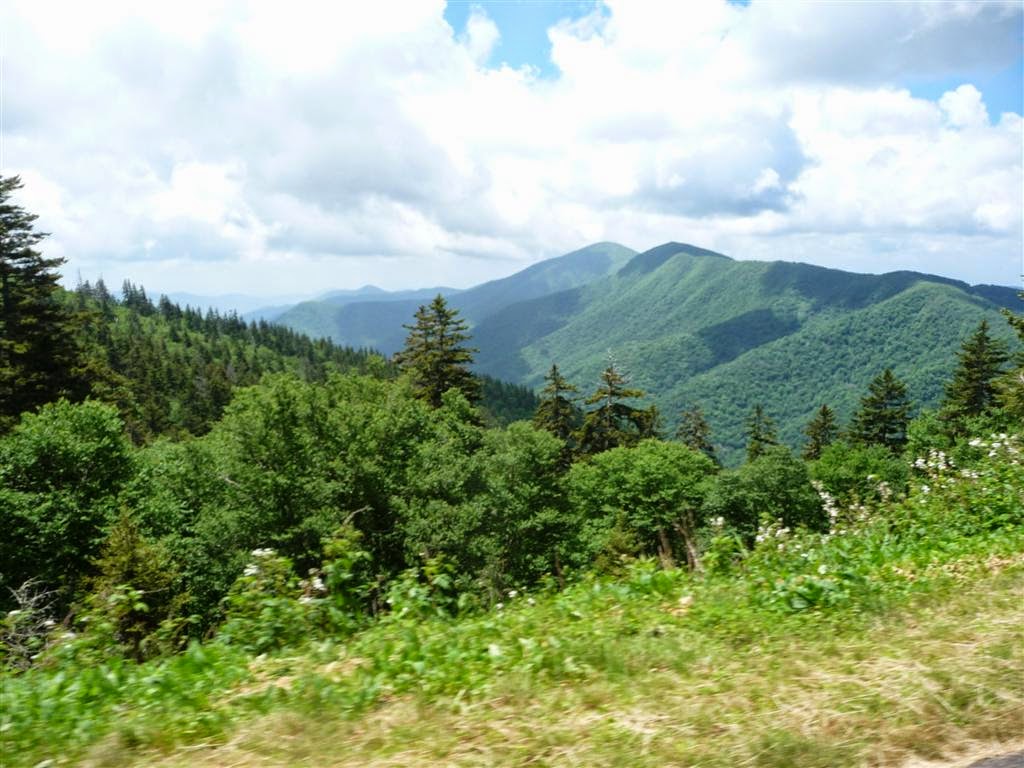 We reached the Mount Mitchell turnoff. It is interesting that the four mile road to the top of the mountain is a state highway despite the fact that one end is at a national park and the other is a dead end. Mount Mitchell is the highest spot in the USA east of the Rockies at 6,684 feet. The road up isn't too challenging. We didn't go all the way to the top. Instead, we stopped at the restaurant for lunch. 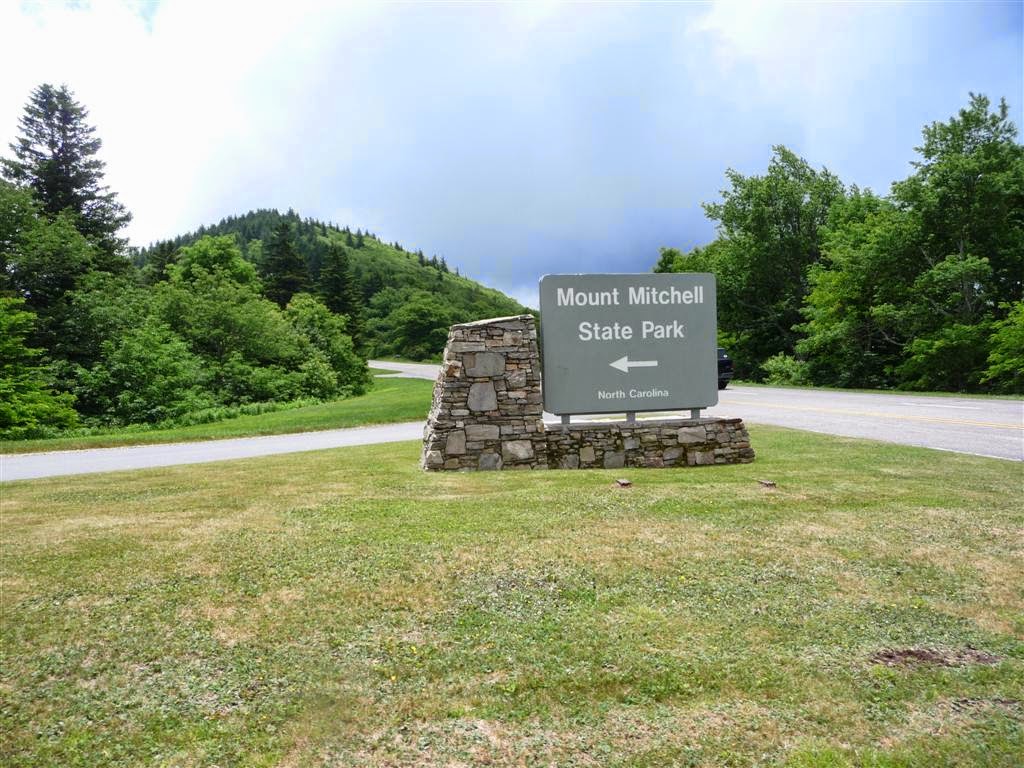 The turn off the BRP 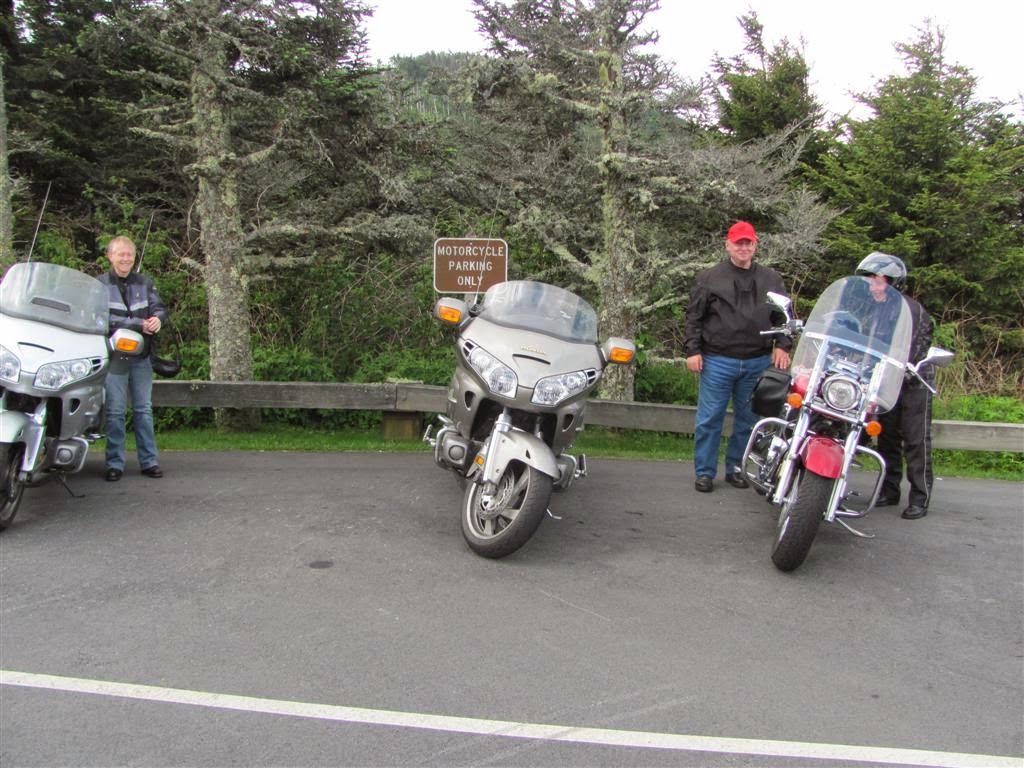 Motorcycle only parking at the restaurant 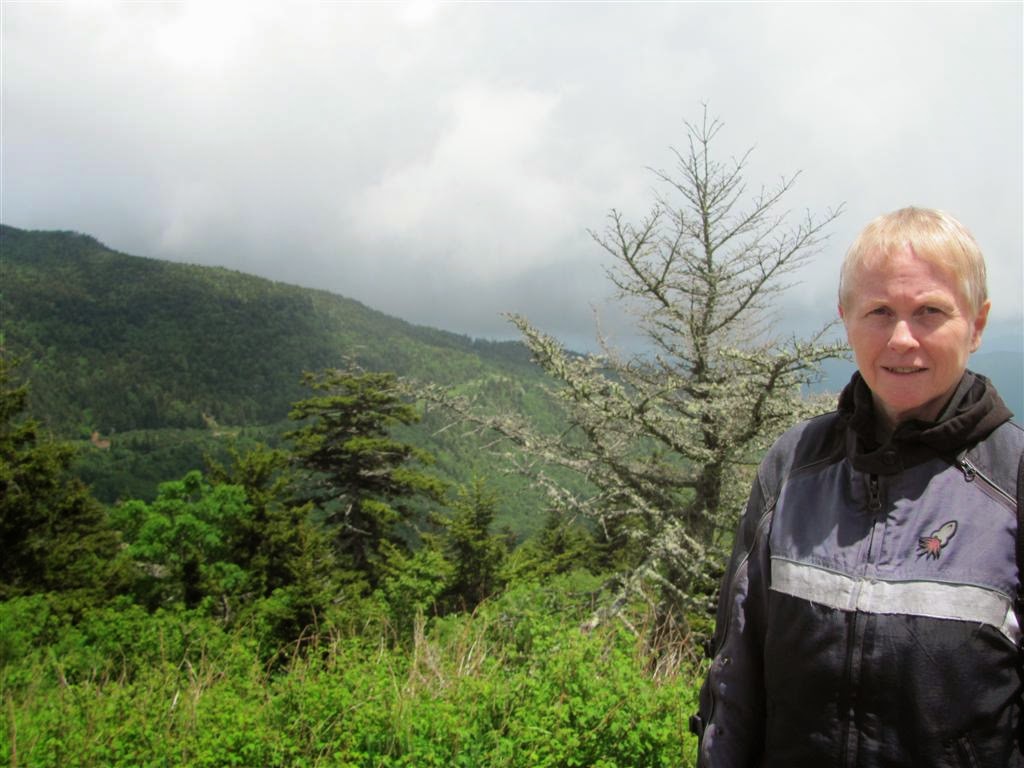 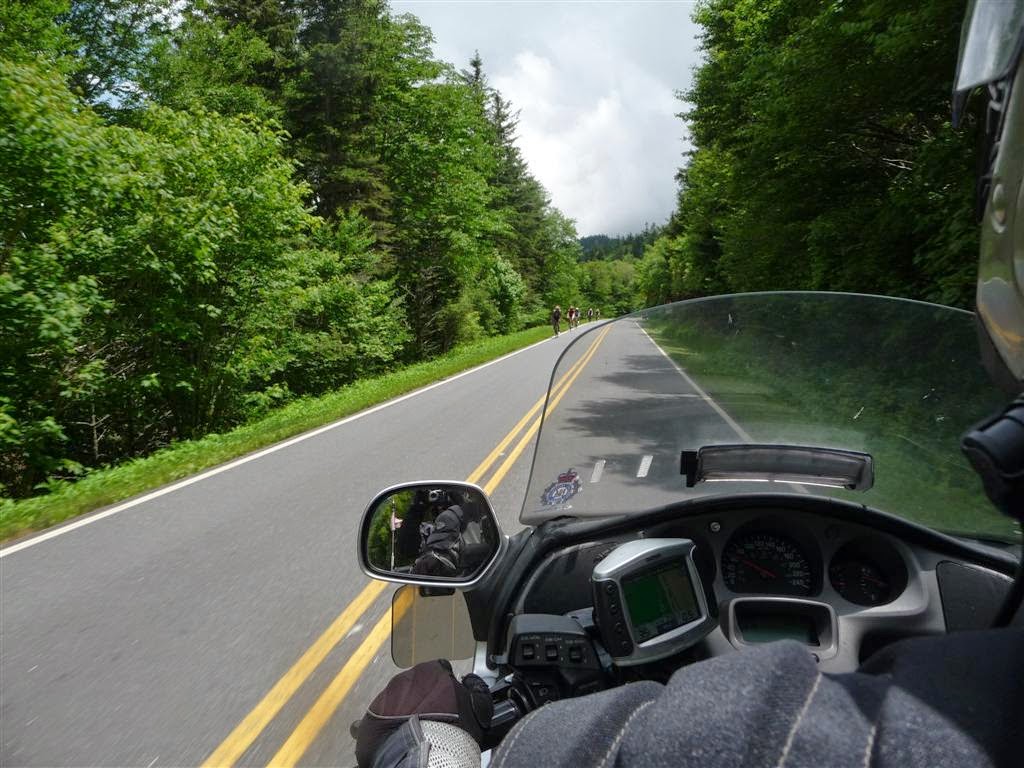 We left Mount Mitchell and rode another 11 miles up the BRP. We got off at NC 80, also known as Buck Creek Road. It is also known to riders as The Devil's Whip. There is a sharp descent from the ridge, with some serious hairpins. To quote someone on the website, "Not the best road for novice riders, especially going down." Gary did just fine, riding his own ride. Near the end, we met a group of mini-Coopers, one Cobra and a Miata pushing hard the other way.

At the end of the Whip, we turned right on US 70 and followed it to Black  Mountain. There, I gave Dianne the choice of riding back to the hotel via the Interstates or taking the shortcut over the mountain. She opted for the shortcut so we took NC 9 to Bat Cave (last time I rode this, Gator was leading) and US 64 into Hendersonville. NC 9 is a challenge in its own right but is a fun ride. All in all, we crossed the Eastern Continental Divide five times today. We got into the hotel lot about 4:00 PM. The weather man had been right about the day.

I looked on line for supper spots and found Hannah Flanagan's.Irish Pub and Eatery. It was downtown, which turned out to be very friendly and pretty. Except for the parking. The luck of the Irish was with us when, right across from the restaurant, I had to stop to let someone back out. So we pulled in.

Gary and the ladies had Irish pot roast. The girls had half portions and still found it a lot. I just had a smoked turkey sandwich with bacon and cheese on a croissant along with home made potato chips. This was another place I would recommend. Then we walked a couple of blocks downtown. Their trademark appeared to be painted bears, but not like Cherokee. 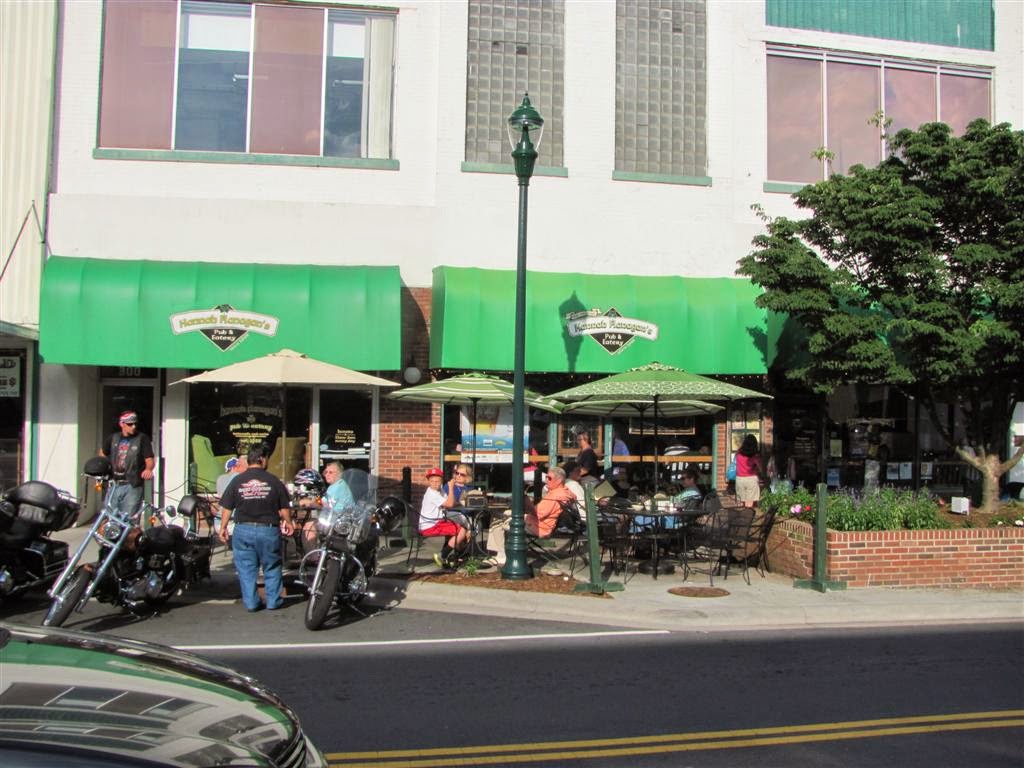 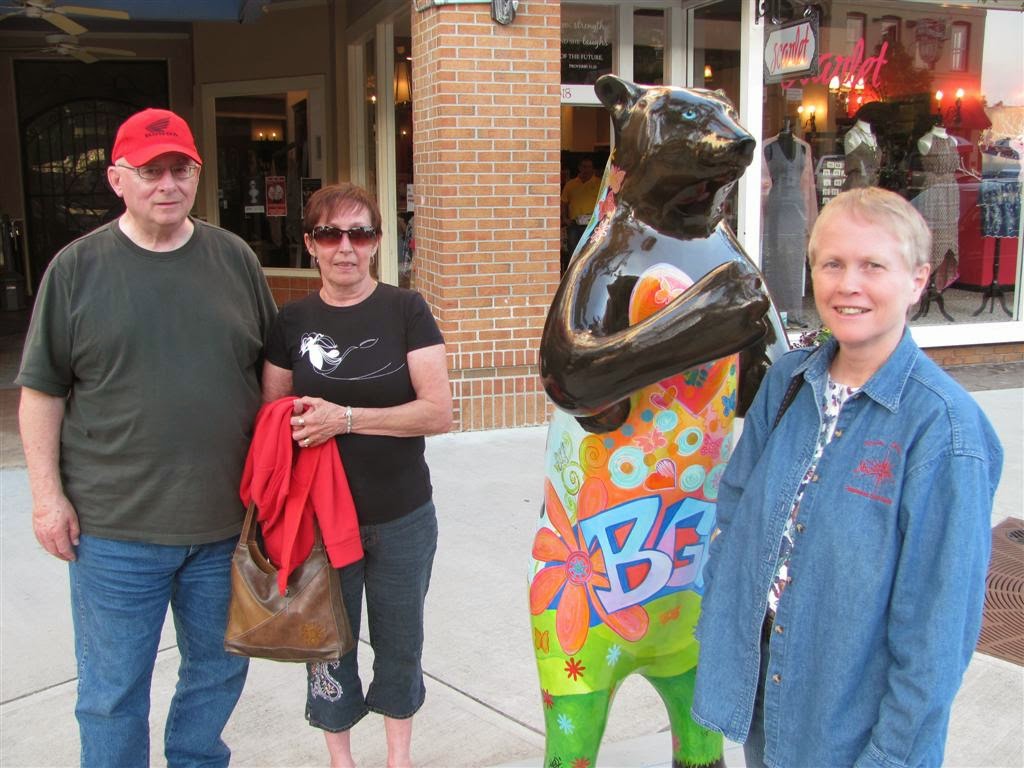 The bears are colourful 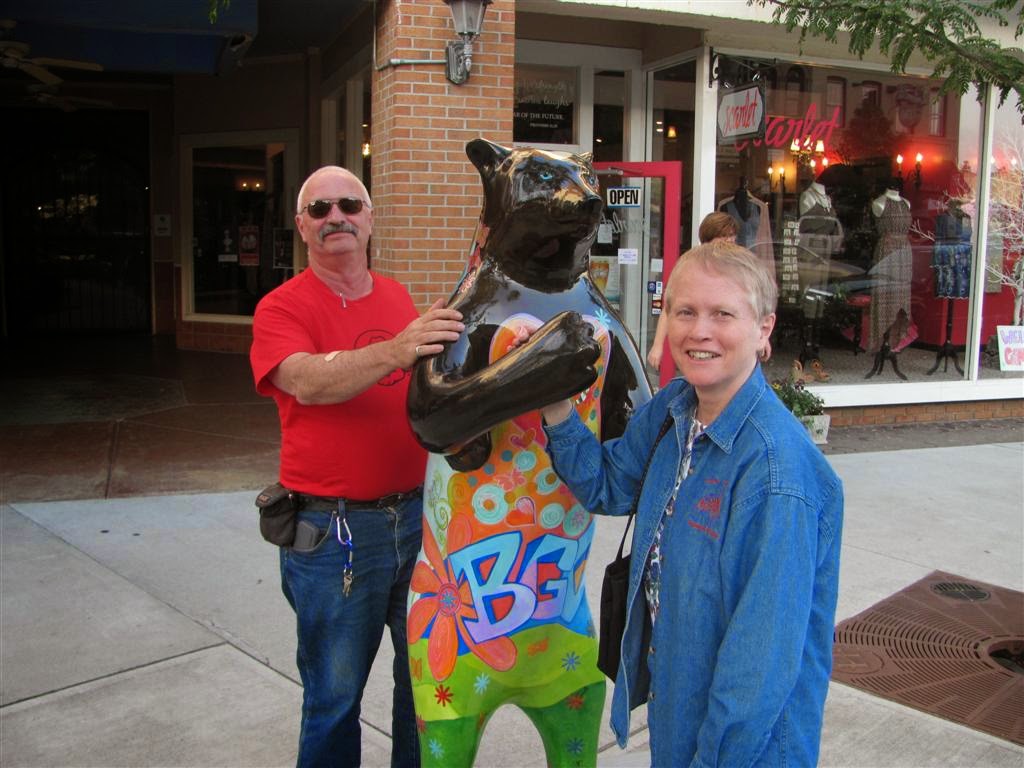 A photo of the author, his bride and a friend 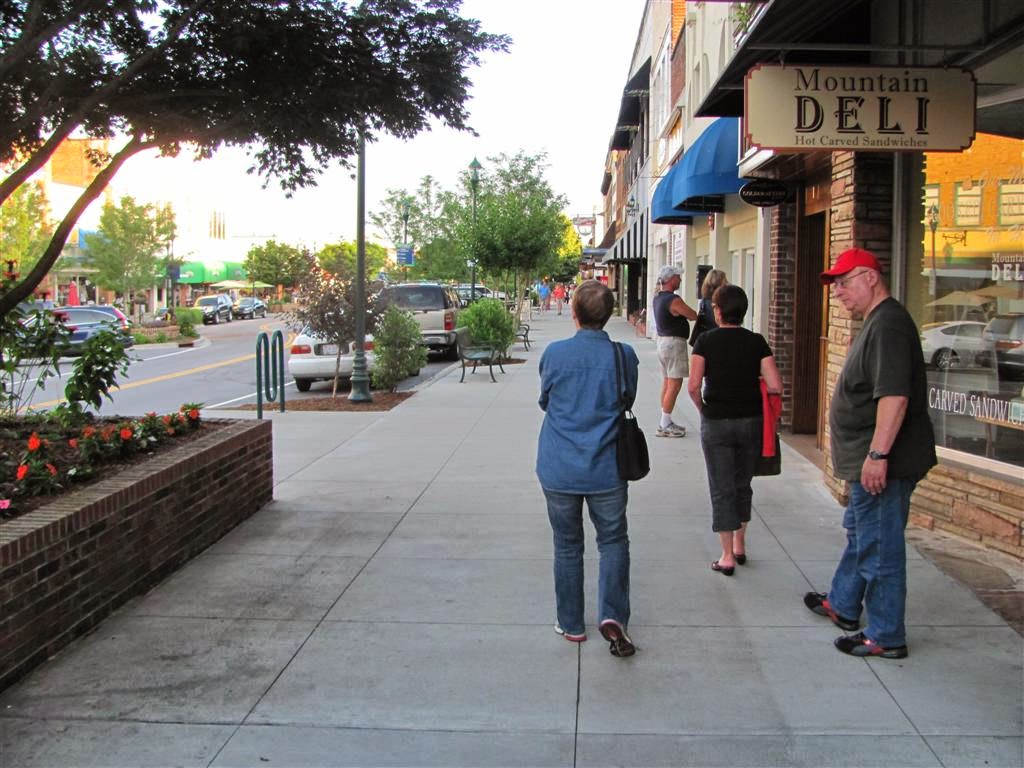 Back at the hotel, we were all tired and headed for our rooms right away. I was in bed before 10:00 PM. 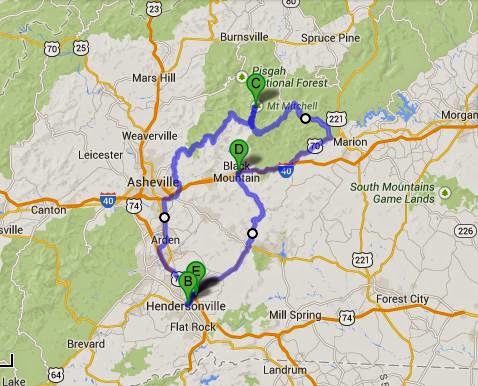 Of all the times I've been down there, I have never been to the top of Mount Mitchell. I'll put that on my list for the next trip down there.

Looks like you guys are having a great time. You were missed in Boscobel.

Liked the bear. And looks and sounds like you're finding some good places to eat. Would like to be there!