It was a dry morning. El Nomad and Solo headed out for Colorado and Bassman and Laura were on the road to Arkansas before we left at 7:00 AM. We headed east on US 74, stopping at the Rest Area near Waynesville to check the trailer tie-downs. All was in order.

I wondered why the GPS had tried to take us over US 19 instead of 74 and then tried to route us to Lake Junaluska. As we approached I-40, I realized that it was trying to take us home via I-75 and Detroit. No matter how many times I say that using a GPS is an art, not a science, I find that I often neglect to check the map after punching in a destination. When will I ever learn? 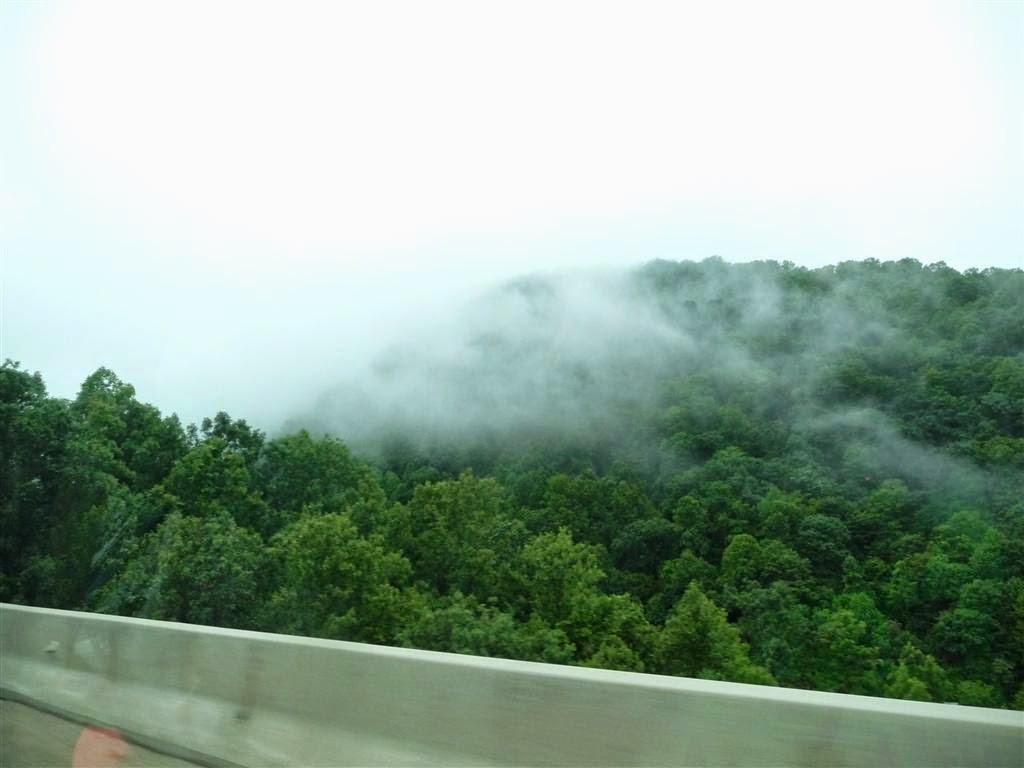 As we headed east on I-40 towards Asheville, I saw the hugely oversize load we had encountered yesterday going over the mountain on US 441. It was parked at a weigh scale on our side. I'm not sure if it was there by choice or otherwise.

It started spitting a bit of rain as we went around Asheville on I-240, but the Sunday morning traffic was very light. We headed north on I-26 up over Buckner Gap and into Tennessee at Sams Gap. I let the engine braking hold us as we descended the other side. After going though Johnson City, we stayed on the Interstate to its end at I-81, then took that northeast into a headwind. 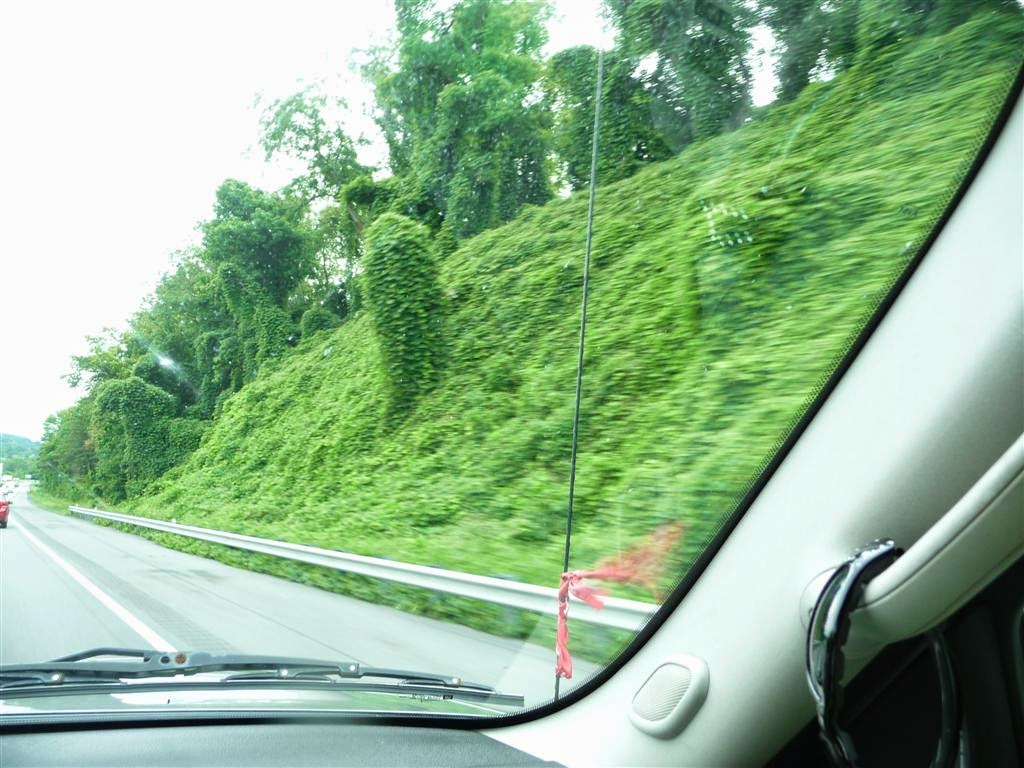 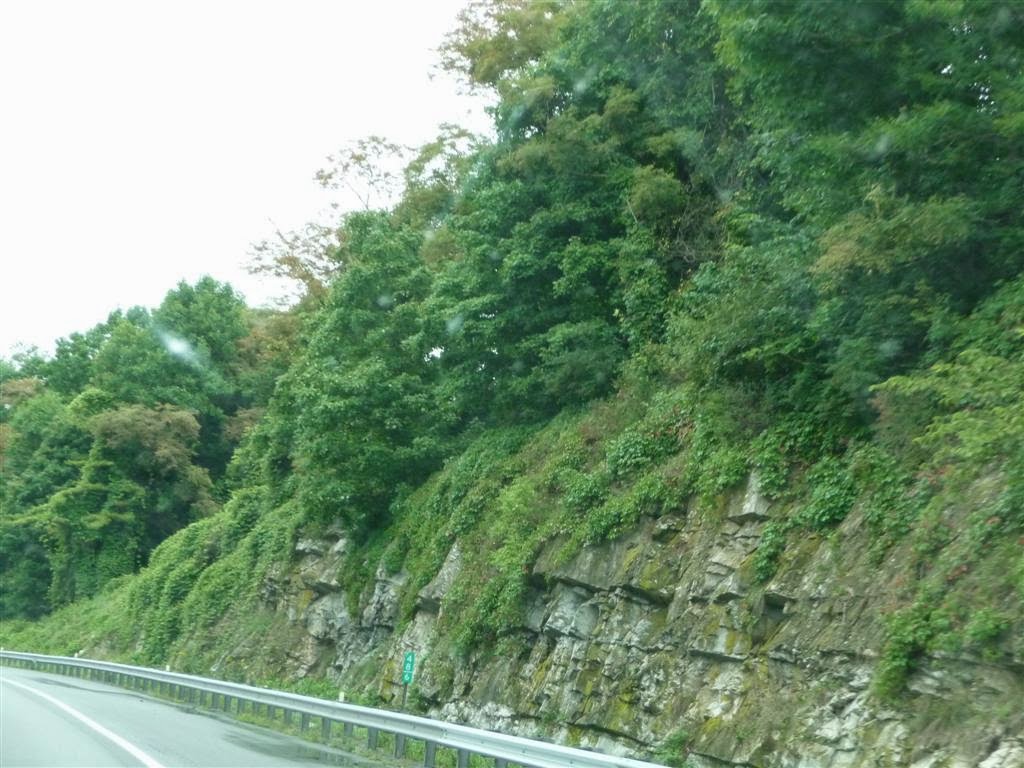 I made a fuel stop in Glade Spring, Virginia. The $3.109 sign at the Petro caught my eye but the Marathon at $3.099 had easier access. I also got a coffee to go. As soon as we pulled back out on the highway, we were surrounded by traffic. I have no idea how that happened since it was quiet a few moments before.

It started raining again in Marion and was coming down steadily as we exited at Wytheville. turning north on I-77. We  cleared both tunnels and entered West (By God) Virginia without any problem. This is where the rain stopped again and the road started to dry. 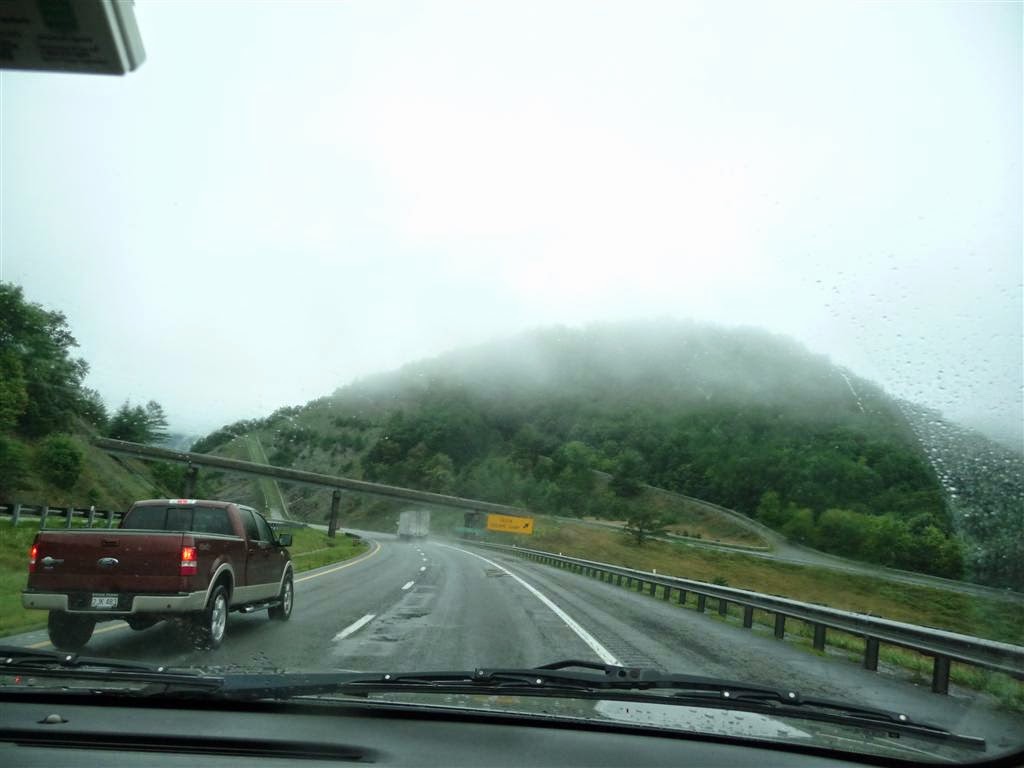 Most of the northbound vehicles had Pennsylvania plates. I wonder if those folks who attach luggage racks to their trailer hitch receivers know that it is illegal to obscure their licence plate? I was pleased to be passed by a Denny's charter coach. These buses are based on Highway 24 north of Guelph, Ontario so it was a touch of home.

We stopped at the WalMart in Fayetteville, WV where I bought a card that added 400 x 2 minutes and twelve months to my Tracfone. I now have almost 1,300 minutes and am good until November 2015. Then we crossed over to Mickey D's and ordered McNuggets and a burger to go. Sandy had her blueberry/pomegranate smoothy as well.

I tuned to the NASCAR channel on the satellite radio to listen to the race from Watkins Glen. Now that I am leading the VROC Fantasy League for the season, I have everything to lose. We stopped at a Rest Area near Fairmont for a bathroom break and another Denny's bus pulled in. Most of the passengers were Asian and the driver told me they were heading back to Toronto from Greensboro, NC.

Entering Pennsylvania, we stopped briefly for fuel in Waynesburg. This would be enough gas to get us to the Service Centre in Angola, New York tomorrow for our last top up prior to crossing back into Canada. Despite it being Sunday afternoon, the traffic around Pittsburgh was relatively light. There was a sign north of the city that said roadwork would be starting tomorrow. We played leapfrog with several more Denny's buses.

Near New Castle, a southbound bridge was down to one lane. Traffic was lined up for five miles behind this. Better them than us. Once again, we dodged a bullet. 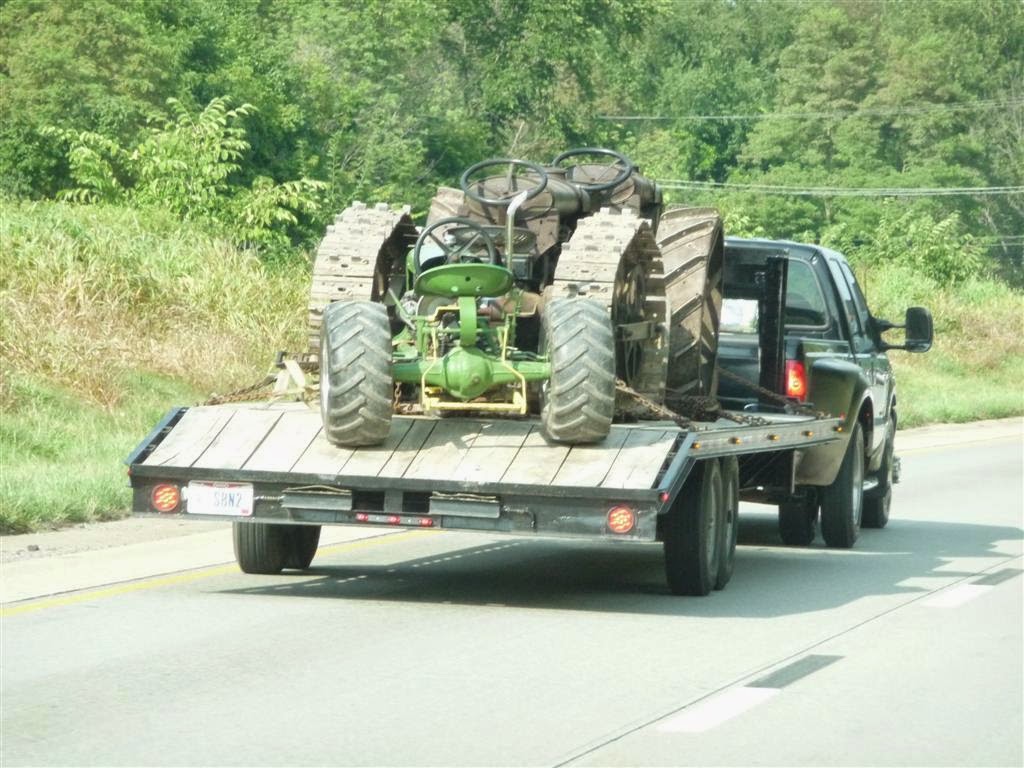 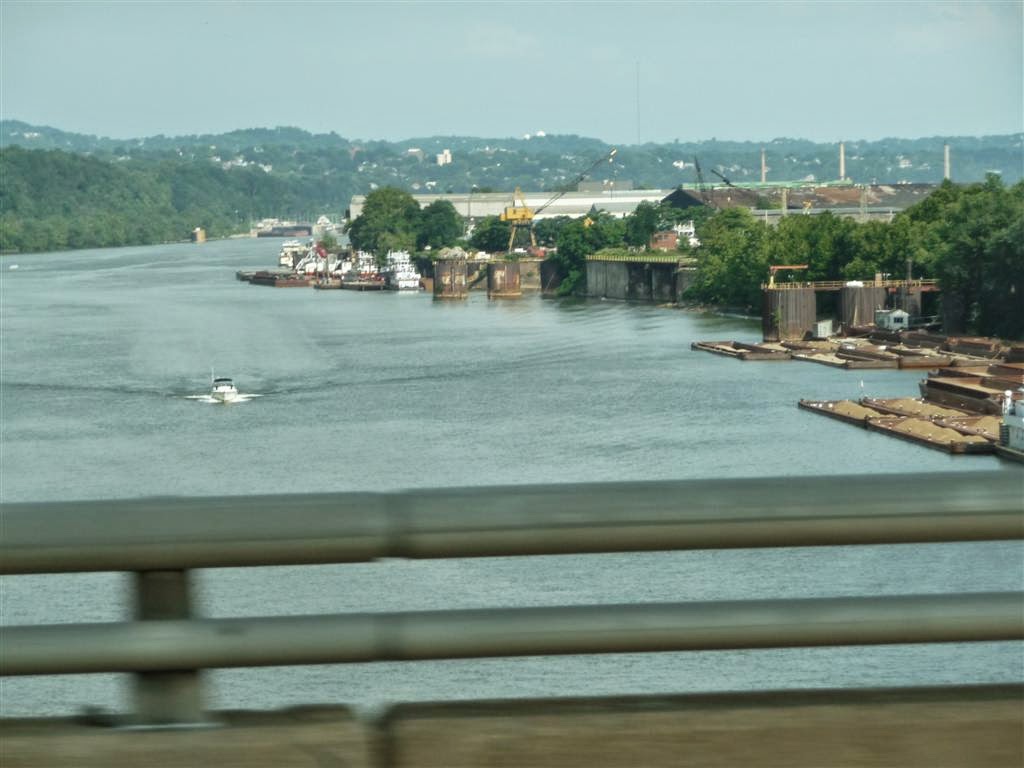 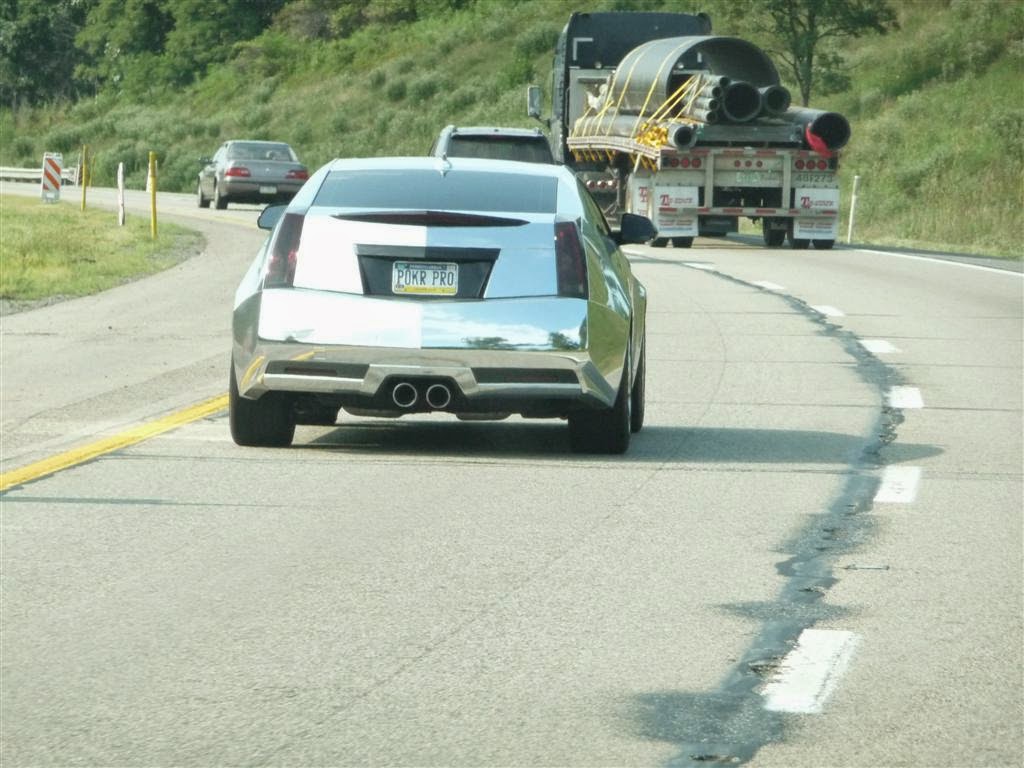 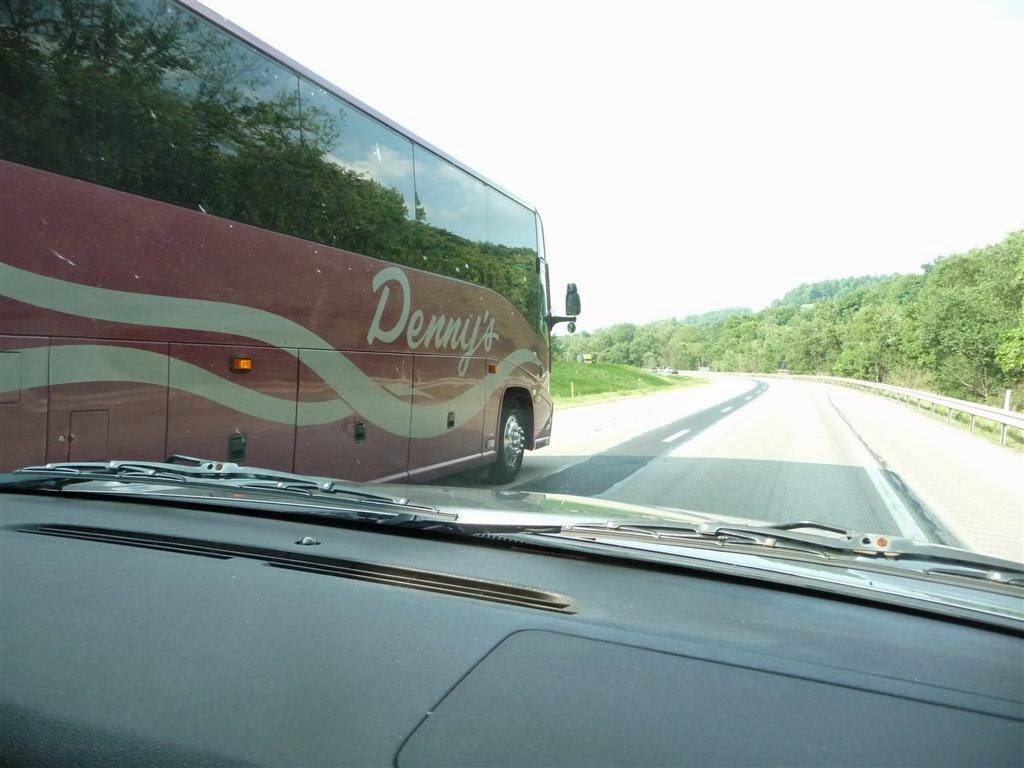 Yet one more Denny's bus 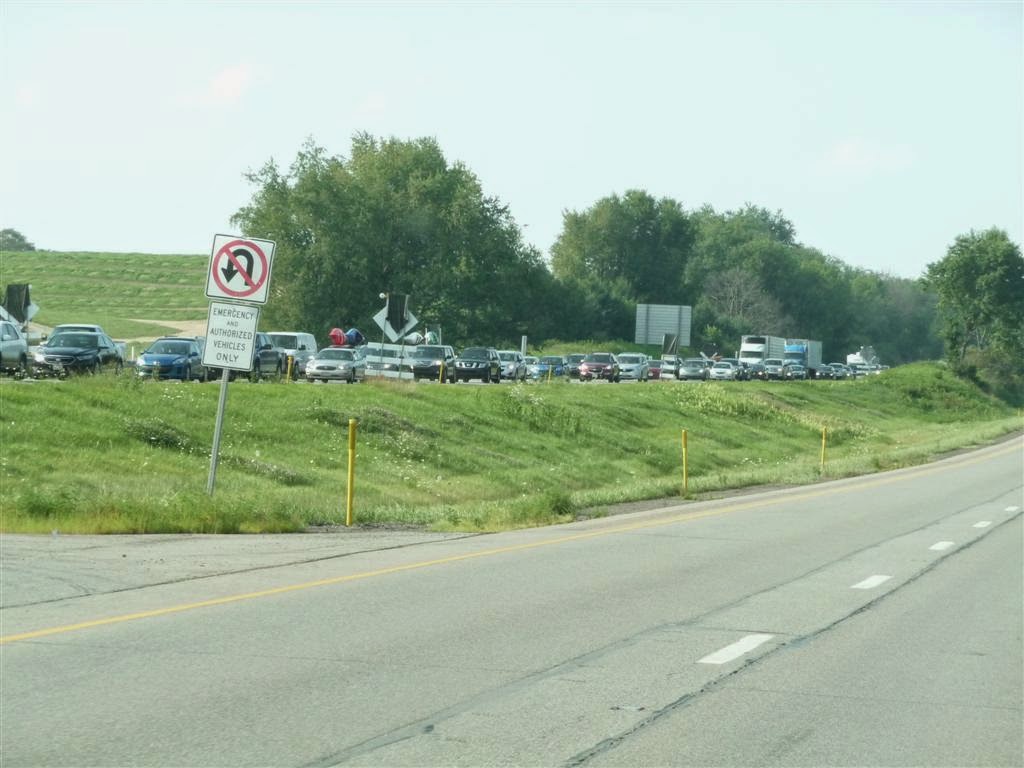 We made one more stop in a Rest Area just south of Grove City, Pennsylvania. There was an ambulance collecting one of the travelers from an SUV. The other passengers were elderly ladies. I didn't find out what the problem was. I called the Super 8 in Erie to be sure they had a room and made a reservation. Then another Ontario bus, this one out of Owen Sound, pulled in and the passengers, mostly Asian again, headed for the restrooms.

I asked one young lady what was up. Apparently, Market America (shop.com) had hosted a gathering in Greensboro, NC with 30,000 attendees. The largest contingent was from Toronto and, for some reason, it had been promoted heavily in the Chinese community in Ontario. Just another multi-level marketing scheme from what I could find. 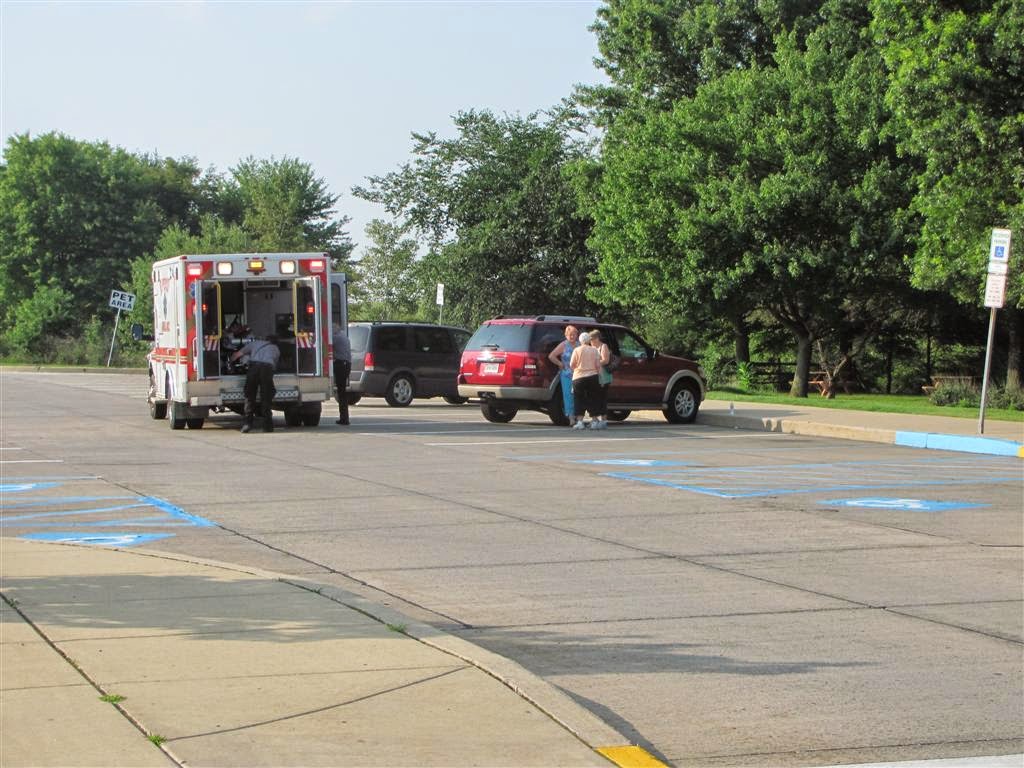 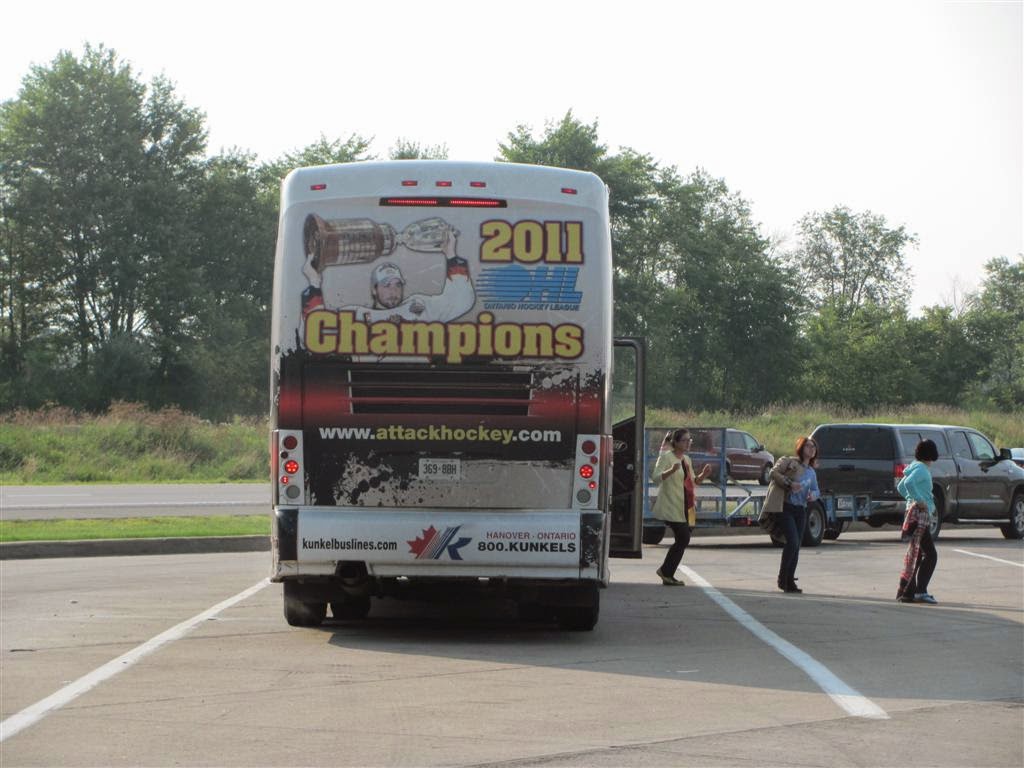 As we pulled into Erie about 7:35, I noted that the truck had turned over 80,000 miles today. Not bad considering it had 33,099 when we bought it in June, 2012. We stopped at a Subway located in the Pilot truck stop at Exit 27 and got sandwiches to take to our room. Across the street on the way to our motel, we saw three large enclosed trailers hooked to heavy duty pickups. There were also motorcycles in the beds of the trucks, indicating that these were probably Harley's following their owners back from Sturgis, SD via commercial transporters. Then again, with my trailer behind me, who was I to judge?

We checked into the motel, a lot  cheaper this Sunday night than on a Friday or Saturday. I was tired and just read a few pages of Harry Turtledove on my Kindle before going to sleep. 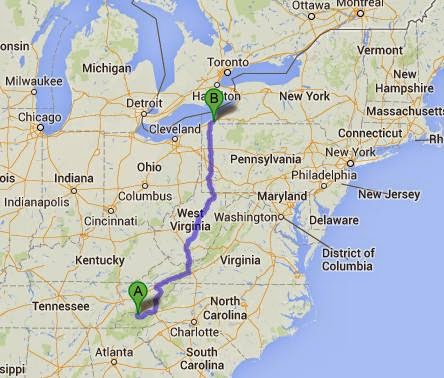