Sandy and I were awakened at 8:00 AM to the sound of a ringing cell phone. I can't remember the last time I slept this late. I couldn't find the phone in time but saw the call was from Biker in Sudbury and called him back. He and Ken had a question about the rally and told me it had been pouring rain there. Then I stepped outside and found  Lucky Al sitting in a chair with his tablet. 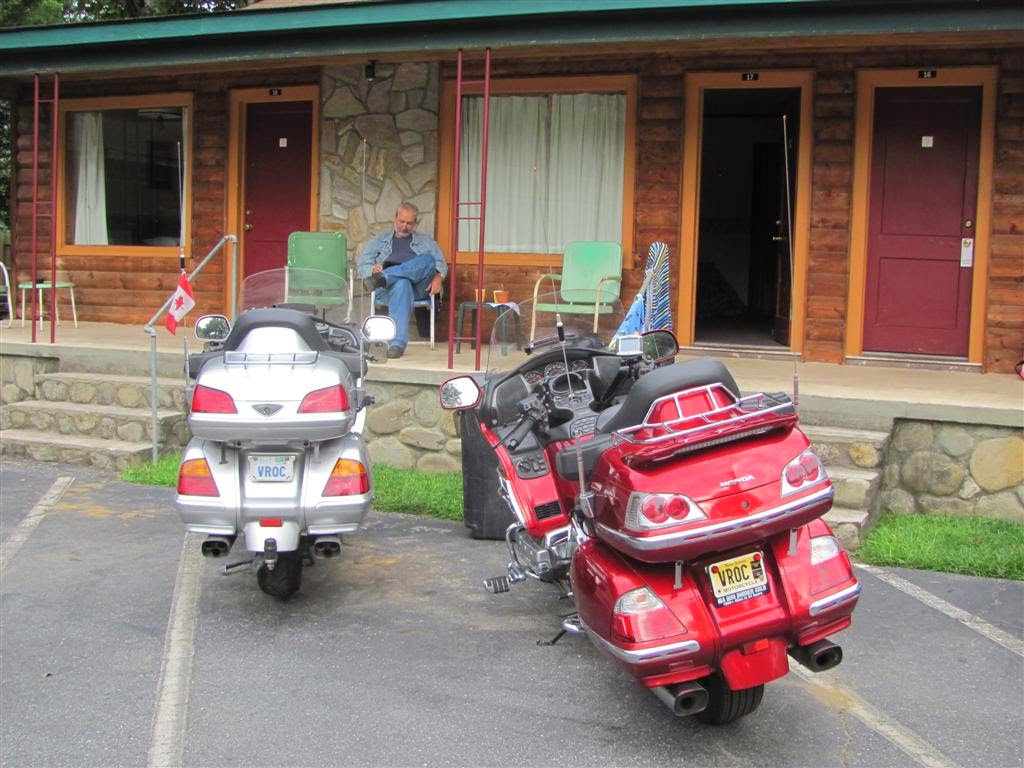 I had communications with CheapB and Mal last night and found they would be riding in from Slapout, Alabama today. Mal and Yvette had flown in from their home in Colorado and would be riding CheapB's son's Nomad. We agreed to meet them at their lunch stop at Bigun's BBQ in Talking Rock, Georgia today around 1:00 PM.

We rode into Bryson City and had  breakfast at the Iron Skillet. The bacon, recommended by the friendly server, was excellent. The couple at the next table got talking with us the guy told us he had ridden up to Sudbury and the Soo back in 2001. While in Sudbury, he had gone to a motorcycle rally in August. Hmmm.... that sounded suspiciously like our Freedom Rally. 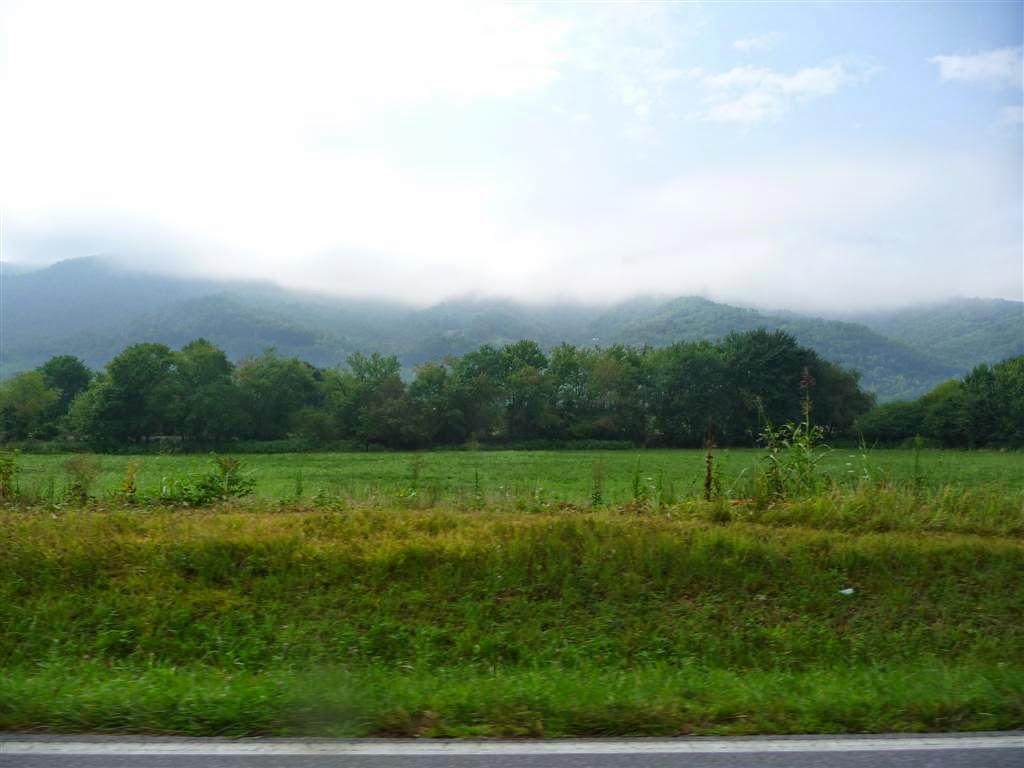 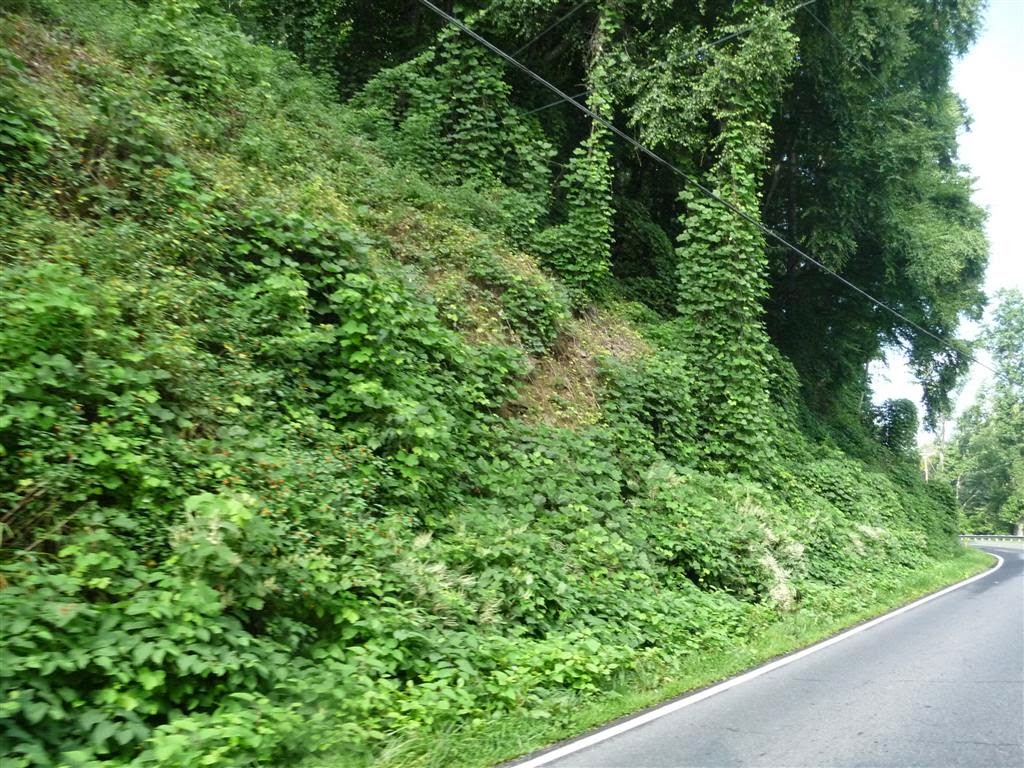 Kudzu, the vine that ate the South 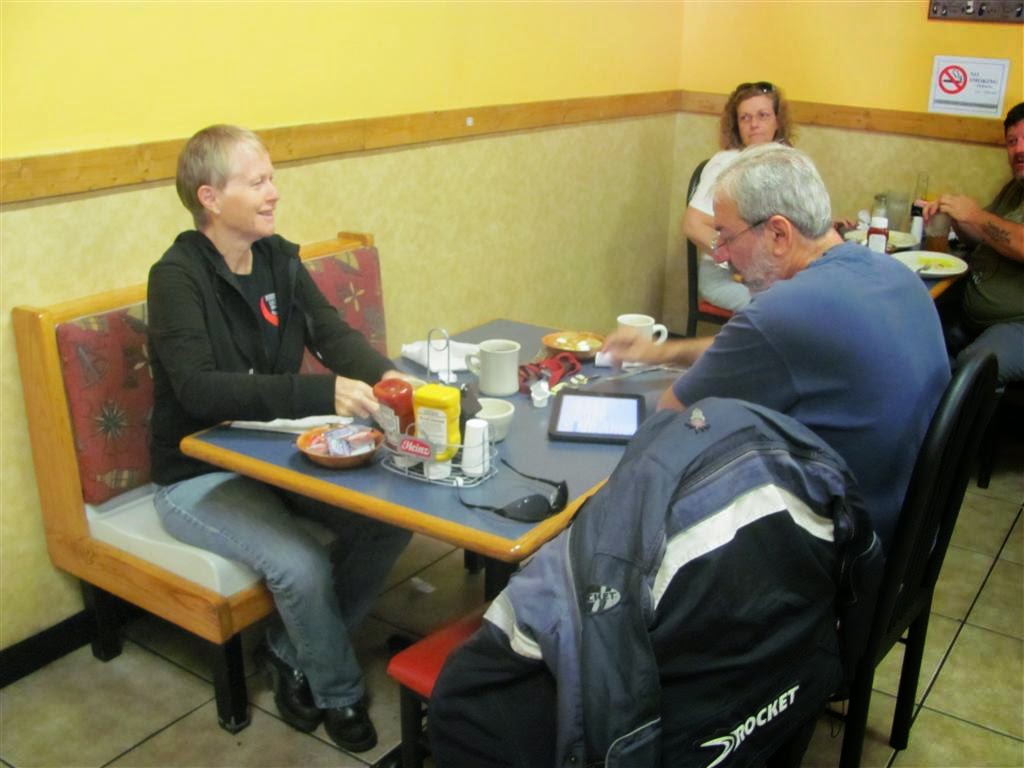 At the Iron Skillet 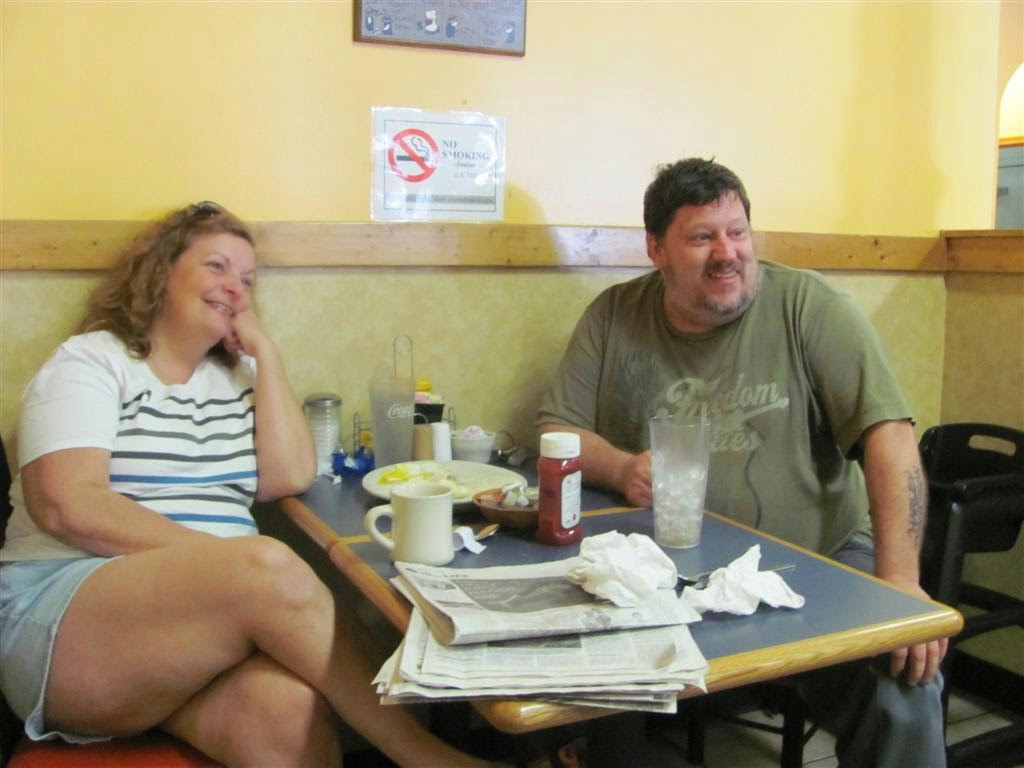 The guy who had been to Sudbury

We finished breakfast and, while Al was getting gas, Sandy and I went to Walgreens to get her a toothbrush. She thought she left hers in Wytheville. We also got Al some toothpaste. At the gas station, we talked to a Harley rider from New York who was having transmission problems. He said the bike was ten years old with 60,000 mile so it was understandable. I didn't mention that my Wing was ten years old with 160,000 miles and I had never had a problem of that magnitude.

We left town about 11:00 and I led us through the Nantahala Gorge. There was nothing ahead of us until we reached the Highway 129 intersection at the far end. This was unusual but very pleasant. The temperature was 24C and the skies were blue. It was an awesome start to a ride. What we did catch at 129 were two semi's and a ready-mix cement truck. There were a few short passing spots and we took care of them before the four-lane into Murphy.

We took Highway 60 over the line into Georgia and went through Blue Ridge, taking Highway 5 for the last ways to Bigun's BBQ. The arrival time was 1:08. This was not bad for 100 miles, given the mountain roads and communities on the route. There was no sign of the others, but CheapB had said 1:00 to 1:30. They arrived at a respectable 1:40. 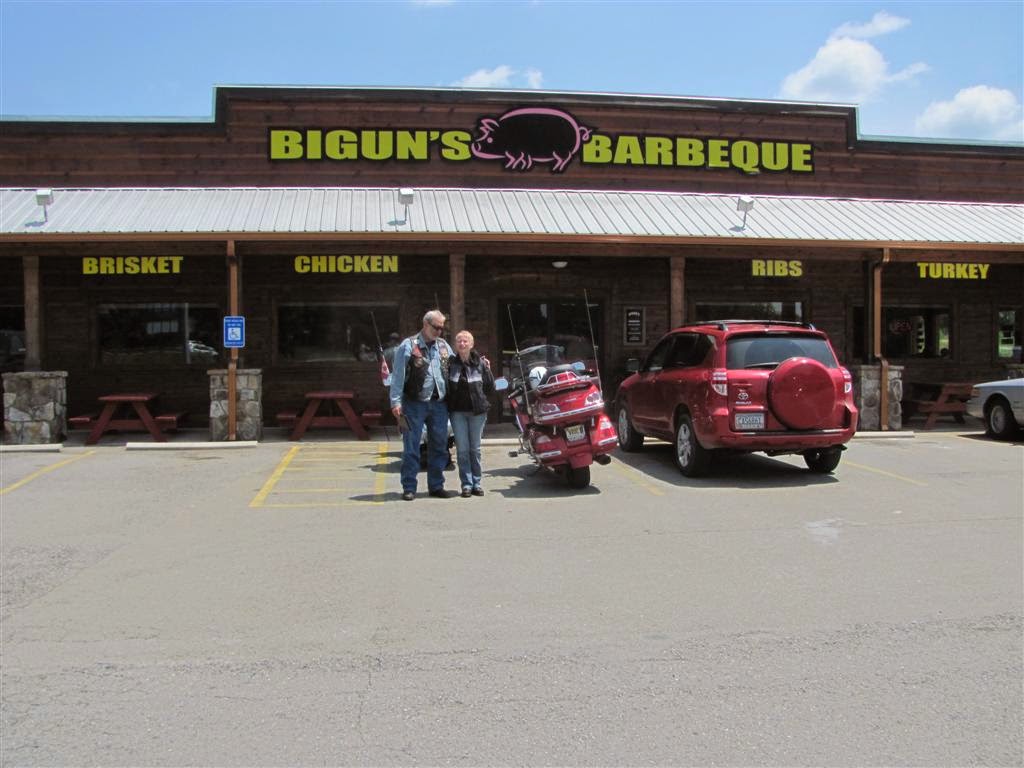 Al and Sandy - we are here 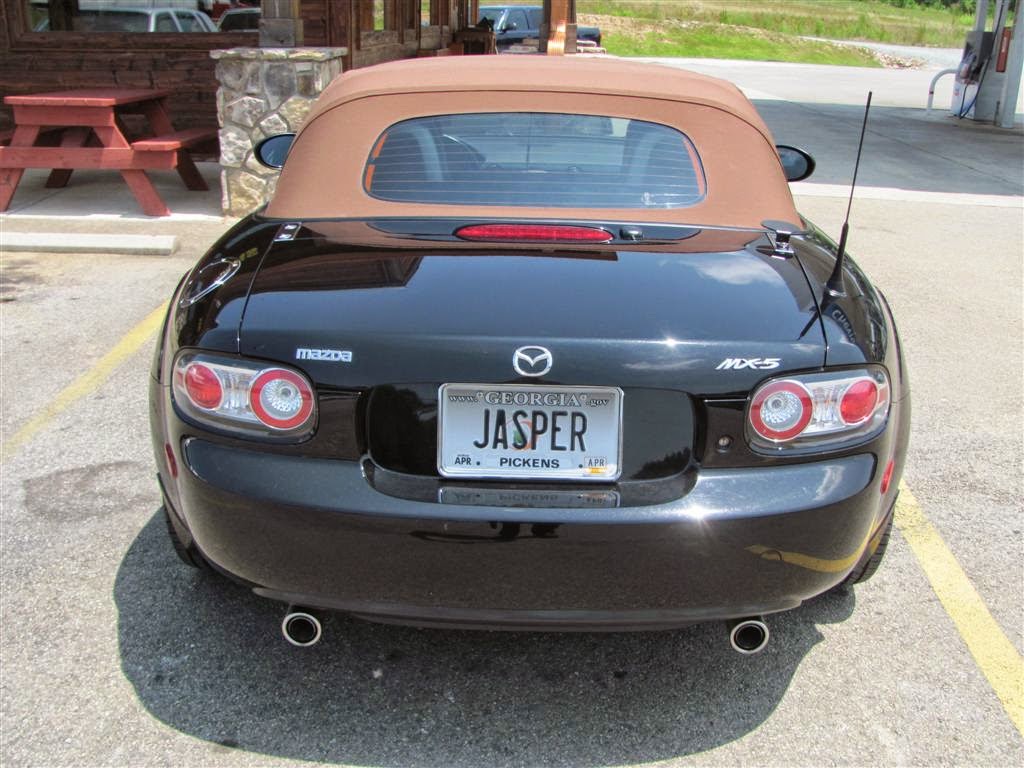 Saw this and thought of our grandson 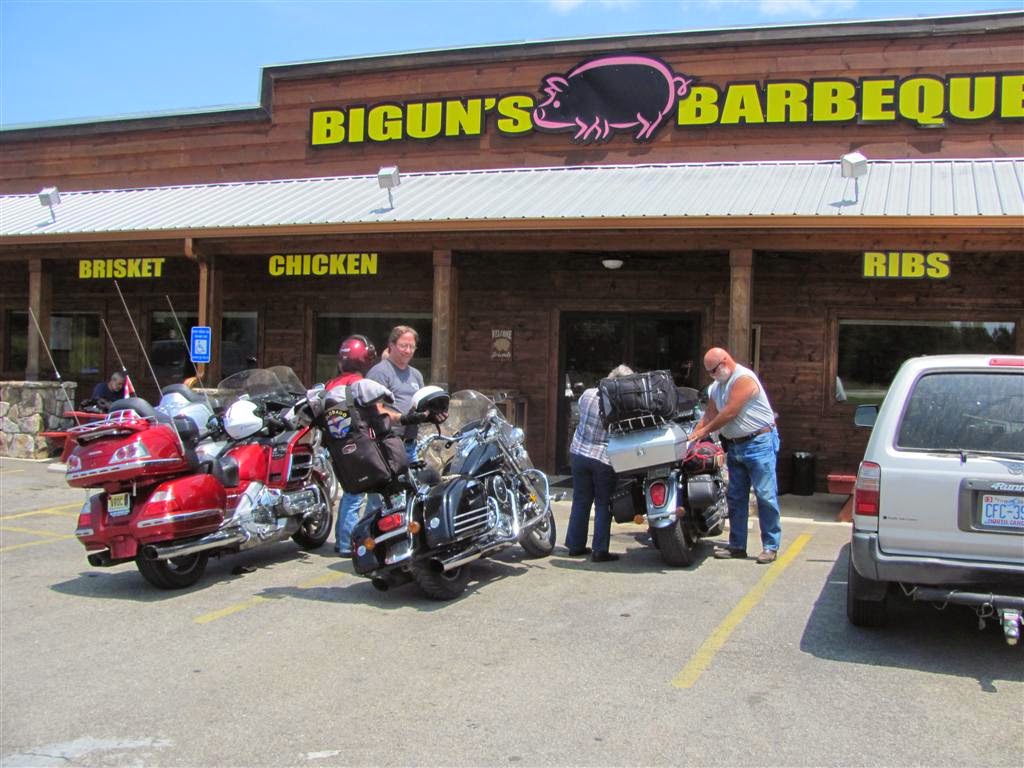 The gang's all here

Everyone ordered. Sandy and I split the special, a large BBQ pork sandwich and a bowl of tater salad. I enjoyed it. 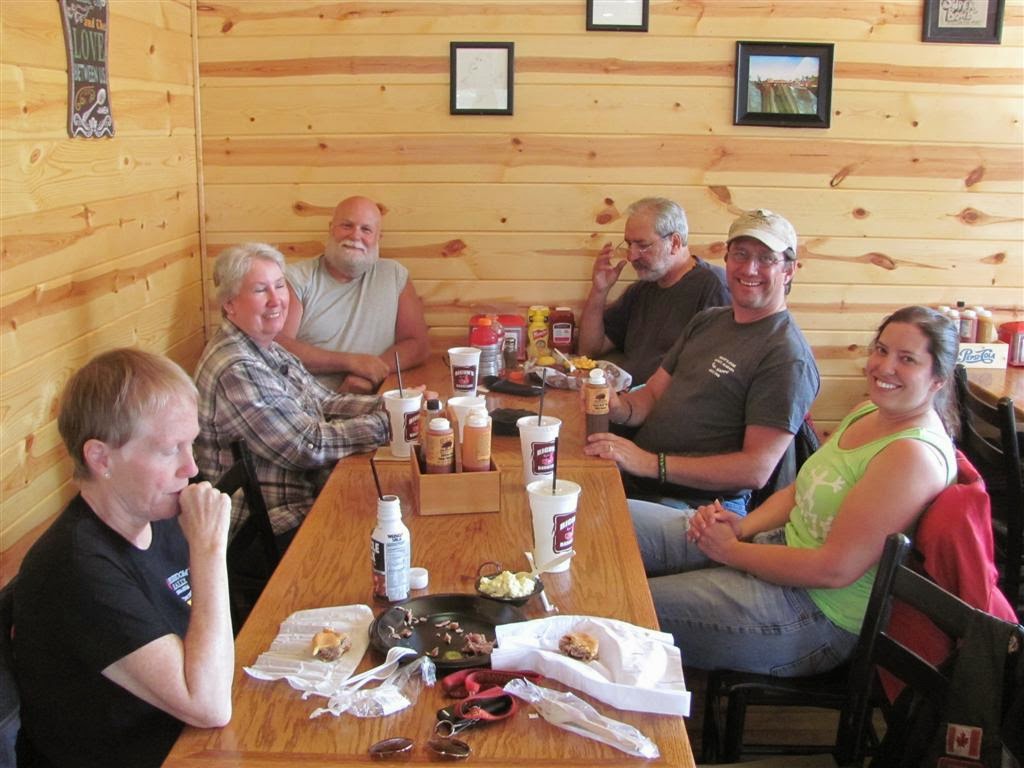 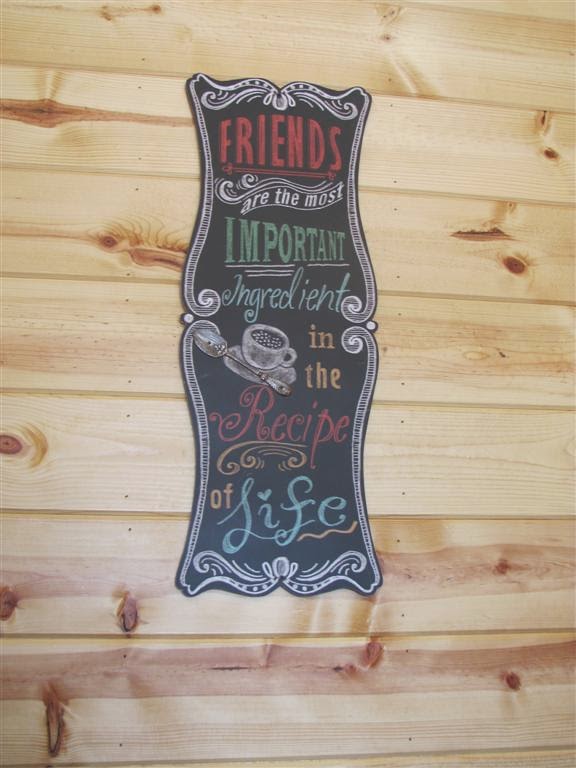 This says it all 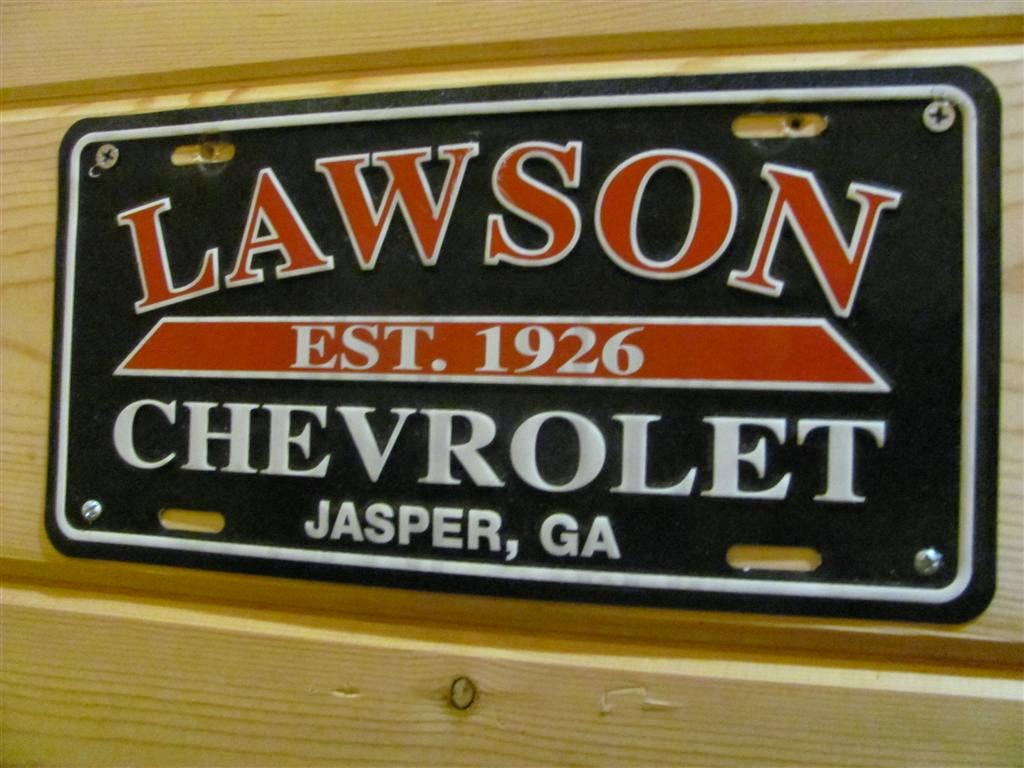 Thought of our grandson again

CheapB led us out on his Vulcan 2000 with the big car tire on the rear. He was holding at 15 MPH over the limit. The limit was 65. We were hauling at a steady 80 while I was remembering the police who had ignored my leisurely five over on the way down. Luckily, we didn't see them on the way back. He stopped at the gas station just before the state line since the going price in Georgia is about $0.30 cheaper than NC. But the price at this station had gone up seven cents since we went by a few hours ago. Still, it was much cheaper than where we were going. 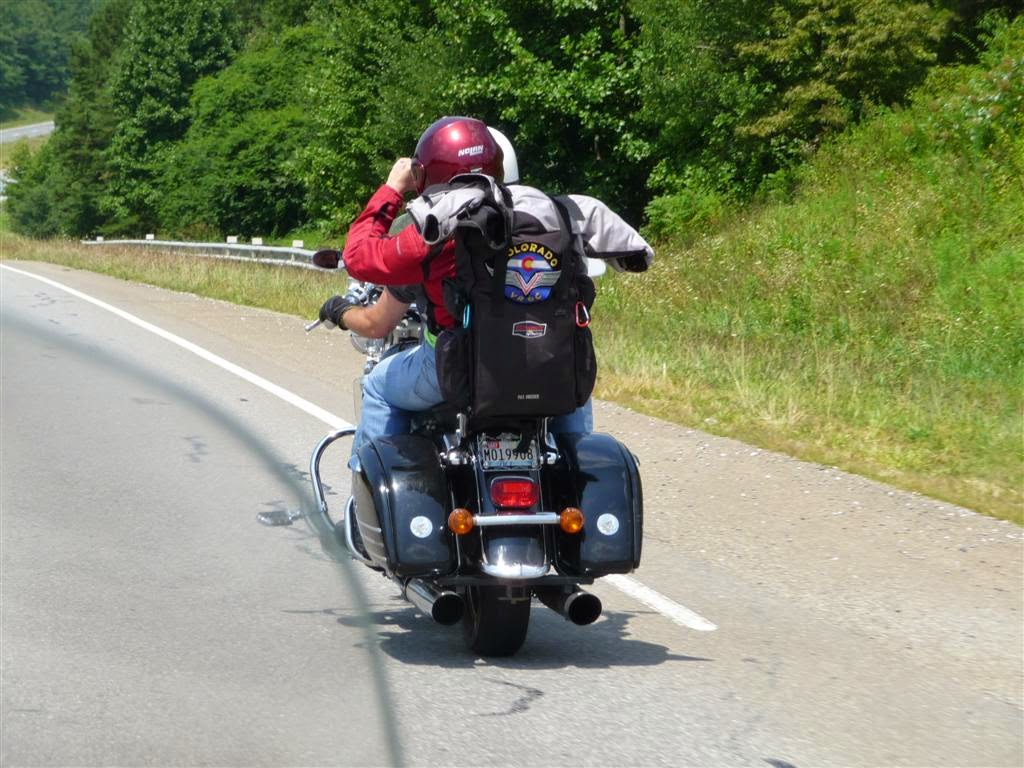 Mal and Yvette in the wind on a borrowed Nomad 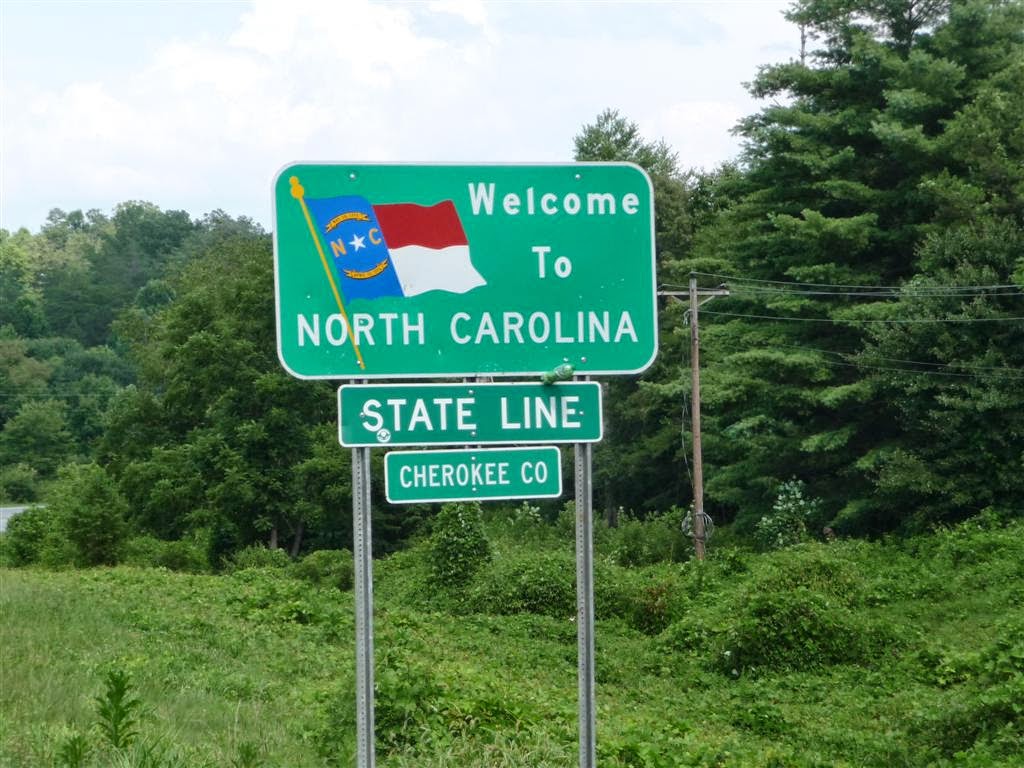 Welcome back to North Carolina

I led the rest of the way. Out of deference to the Rogue, I held the speed at about ten over. As we entered the Nantahala Gorge, we got behind a Prevost charter bus. I hate buses on roads like this but there had been a sign back in Murphy stating that US 74, this winding trail through the gorge, was the best truck route to Asheville. The bus held us up but did a respectable job. Unfortunately, when it came time to climb back out, we got behind a white school bus carrying people to the zip-line facility. This slug was able to maintain about six MPH going up the hill and the Wing started to heat up. We got to the top before I saw red.

CheapB and Mal got off at exit 67 to get some adult beverages in Bryson City. Al followed me to Exit 69, the direct route back to the Lodge. Southern Draw and Southern Charm were setting up the registration table while CC Rider had arrived from Mississippi and was sitting in front of his room. We parked and wandered back to talk to them. The temperature was now around 30C so Mal and Yvette decided to go swimming. After giving CC the Corbin seat I had sold him, we joined them and so did Al and CheapB. 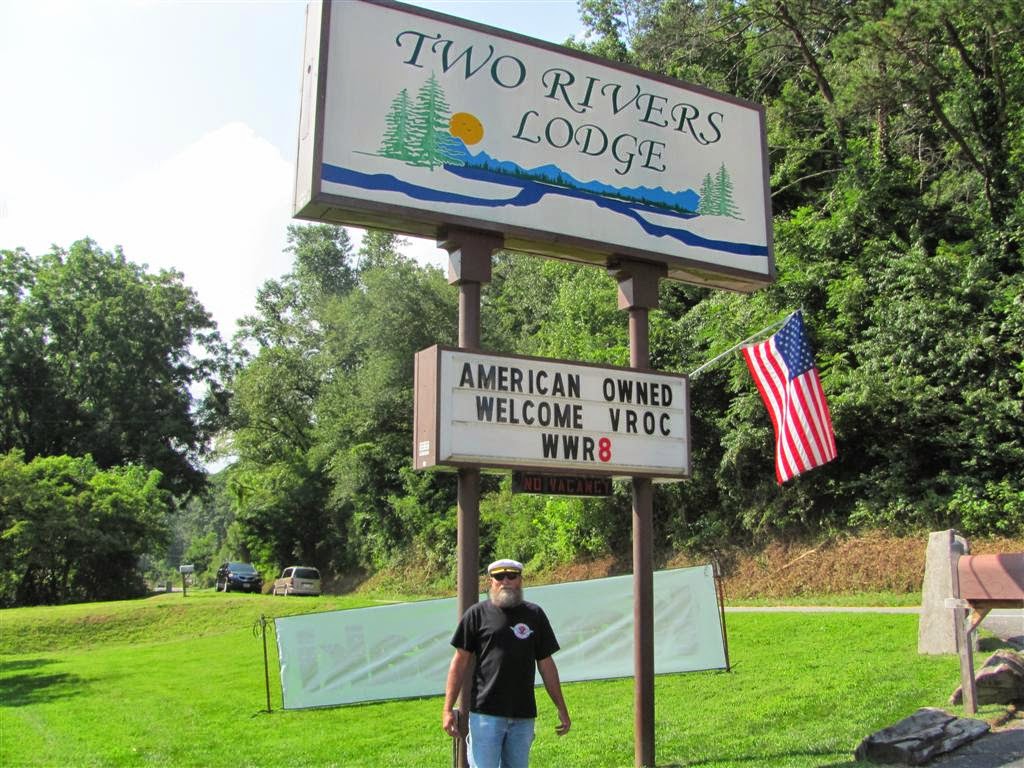 It's so nice to be welcomed 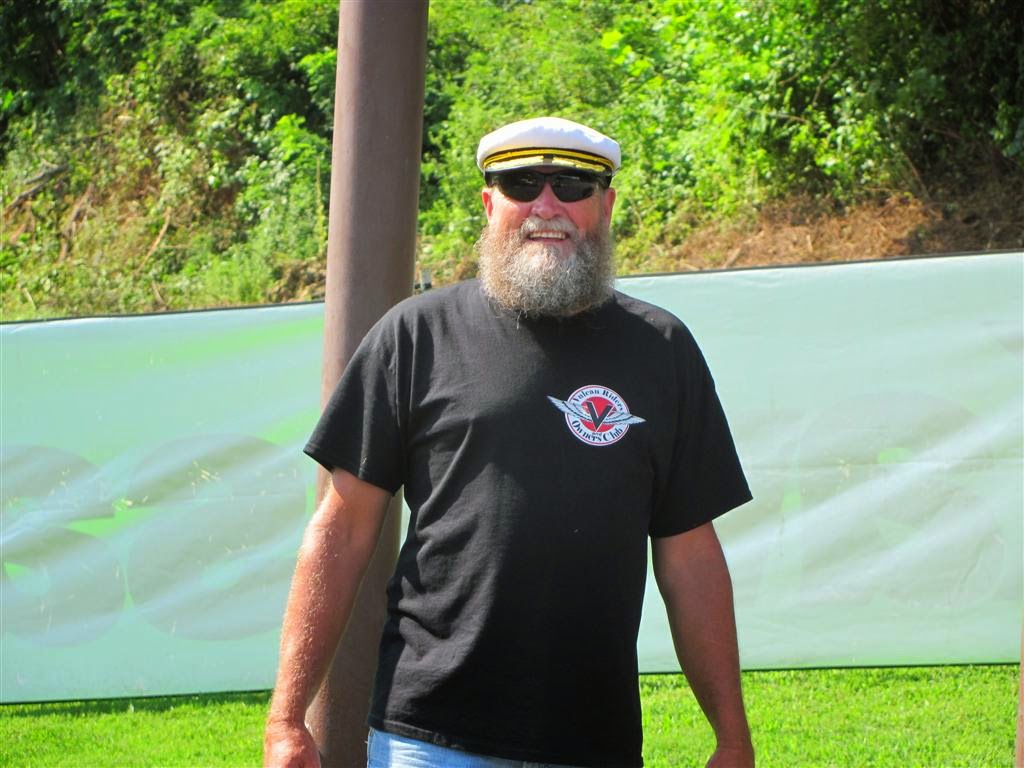 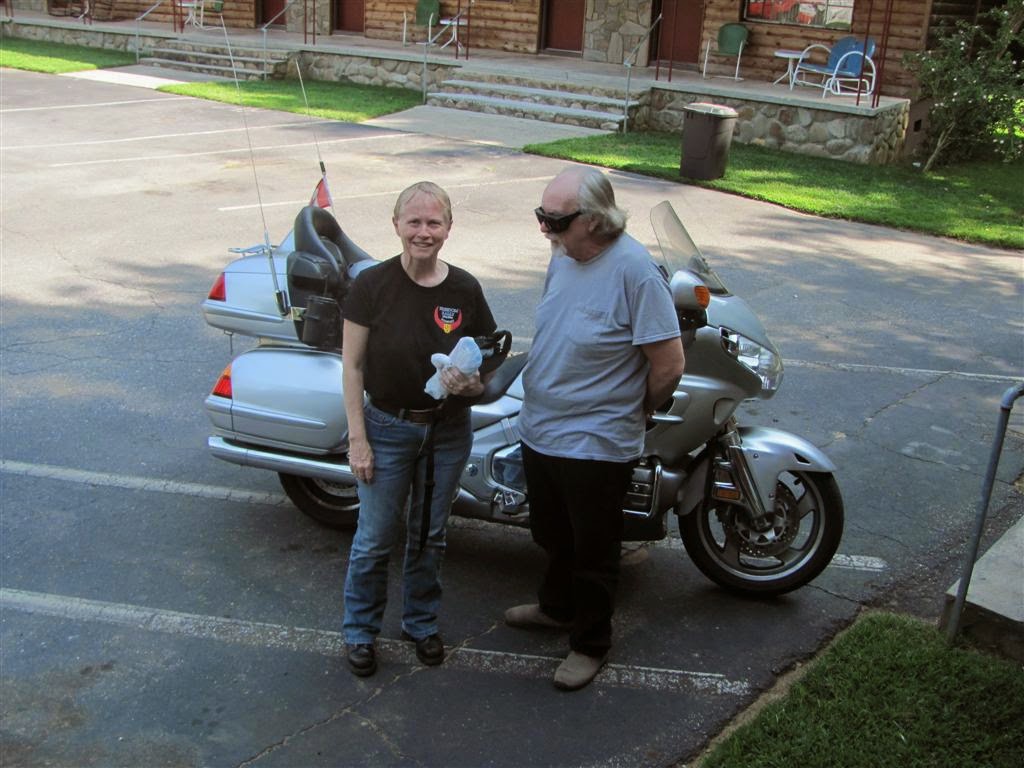 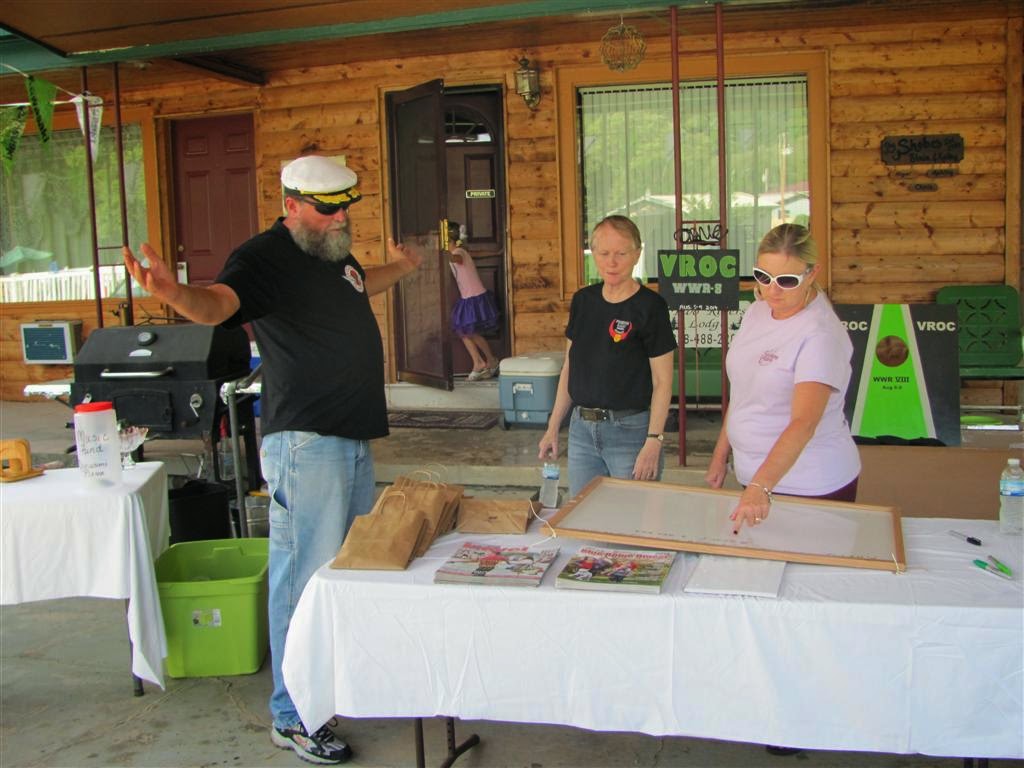 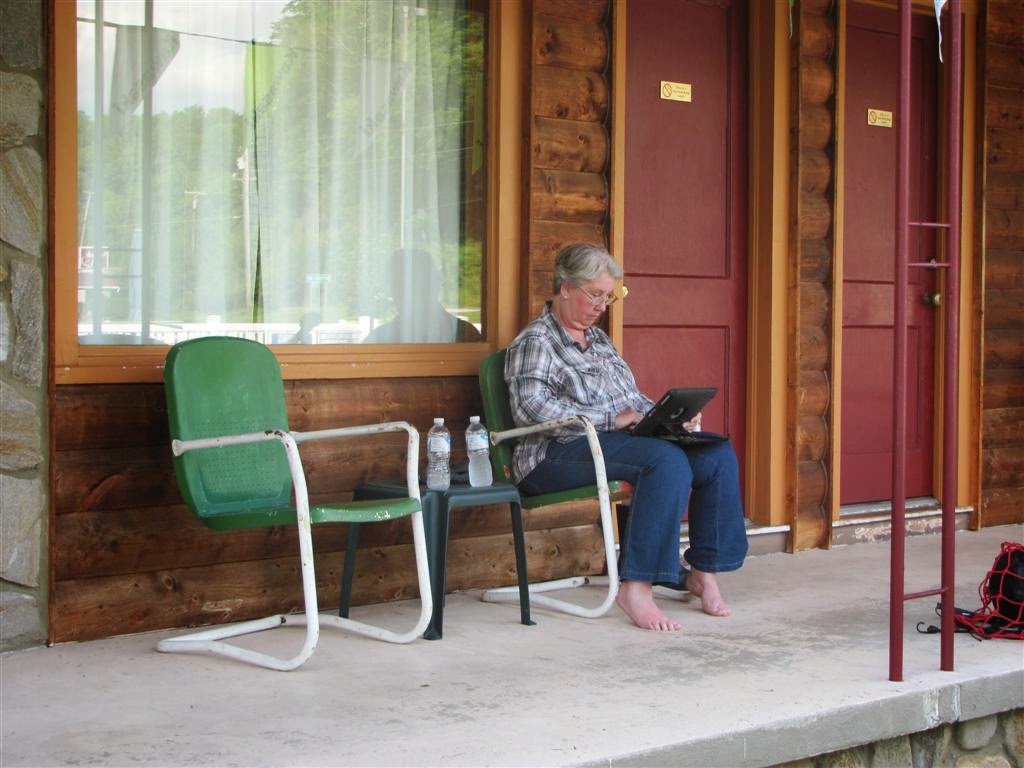 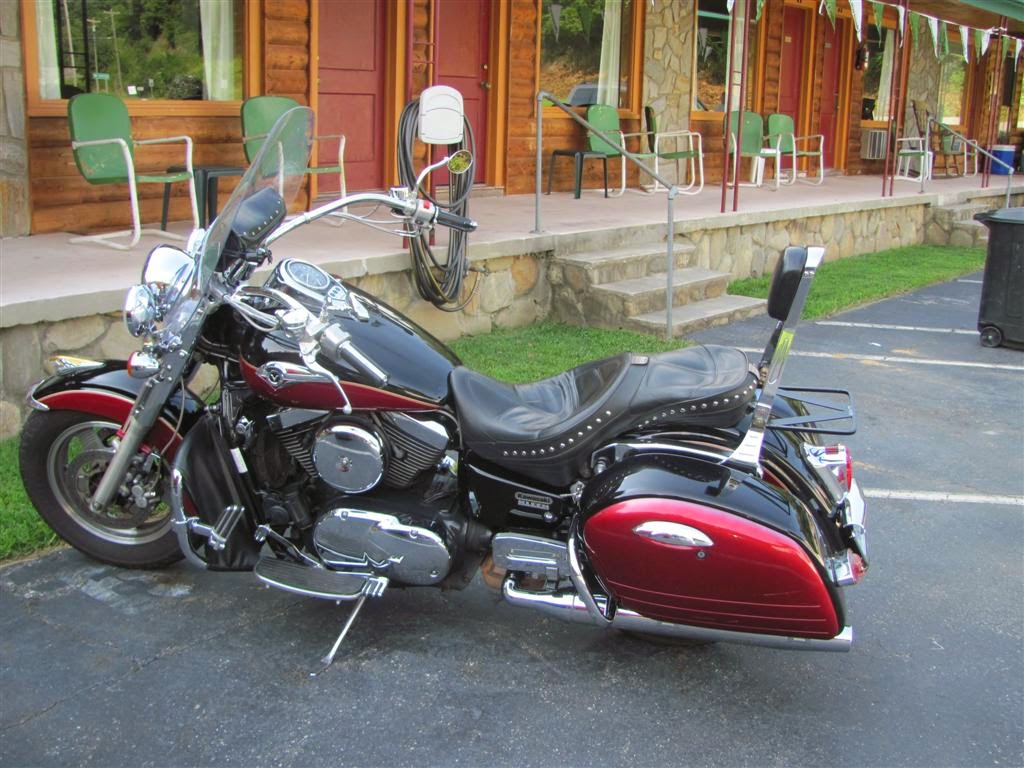 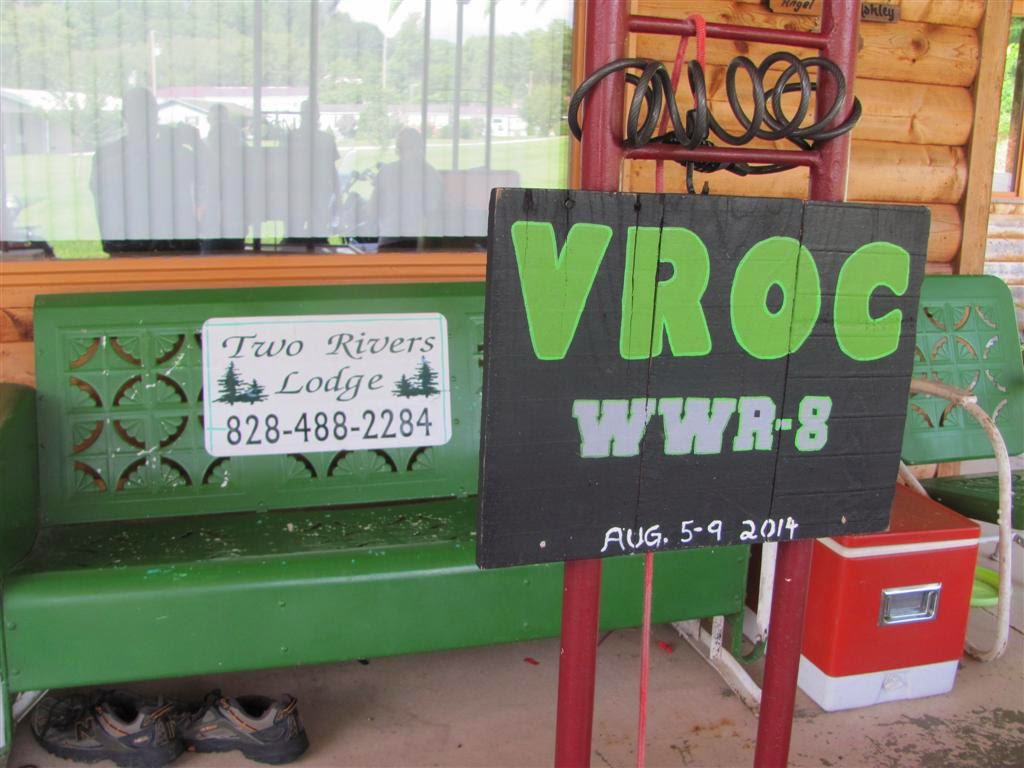 No doubt about what's going on here 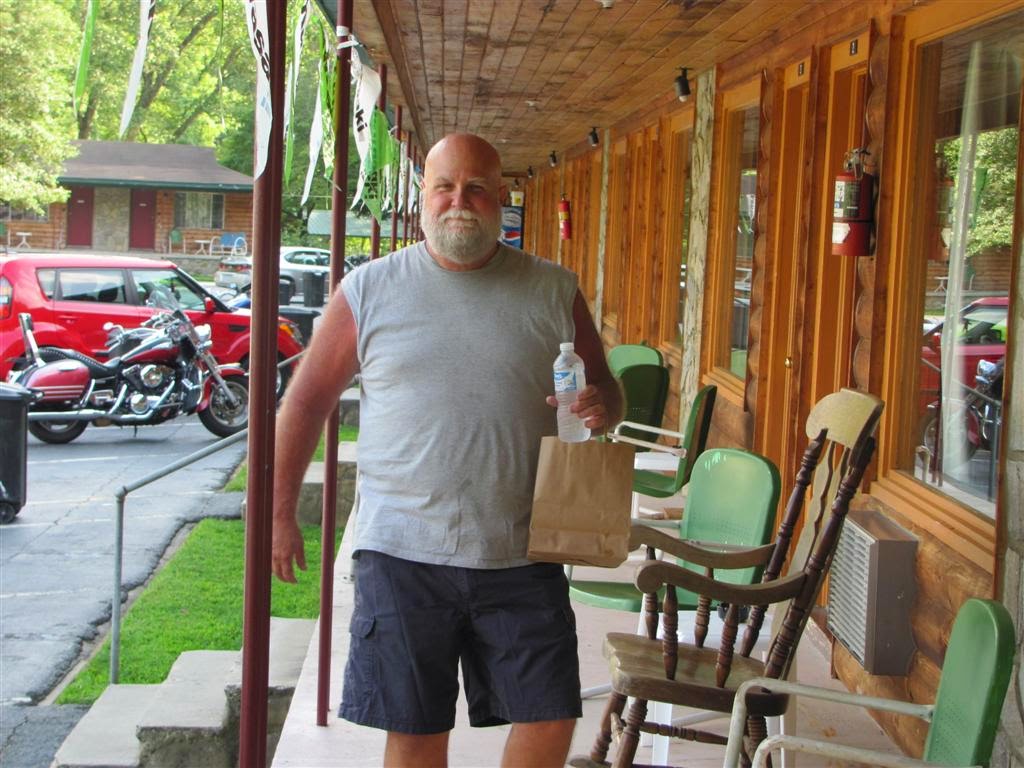 Cheap B got comfortable quickly 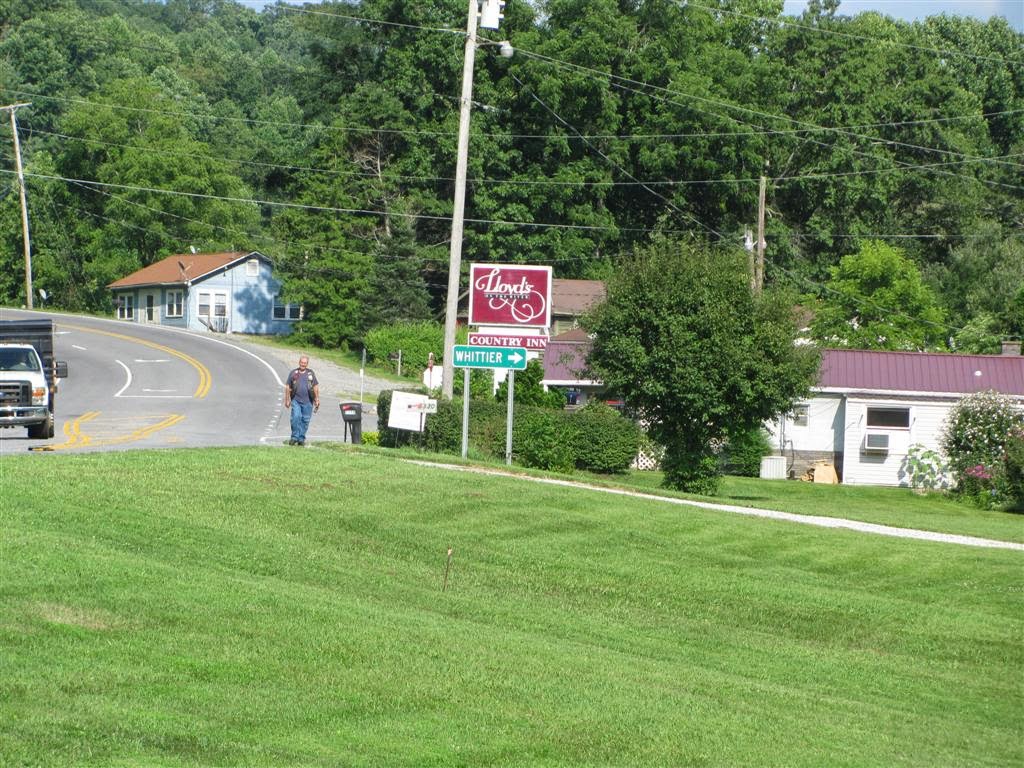 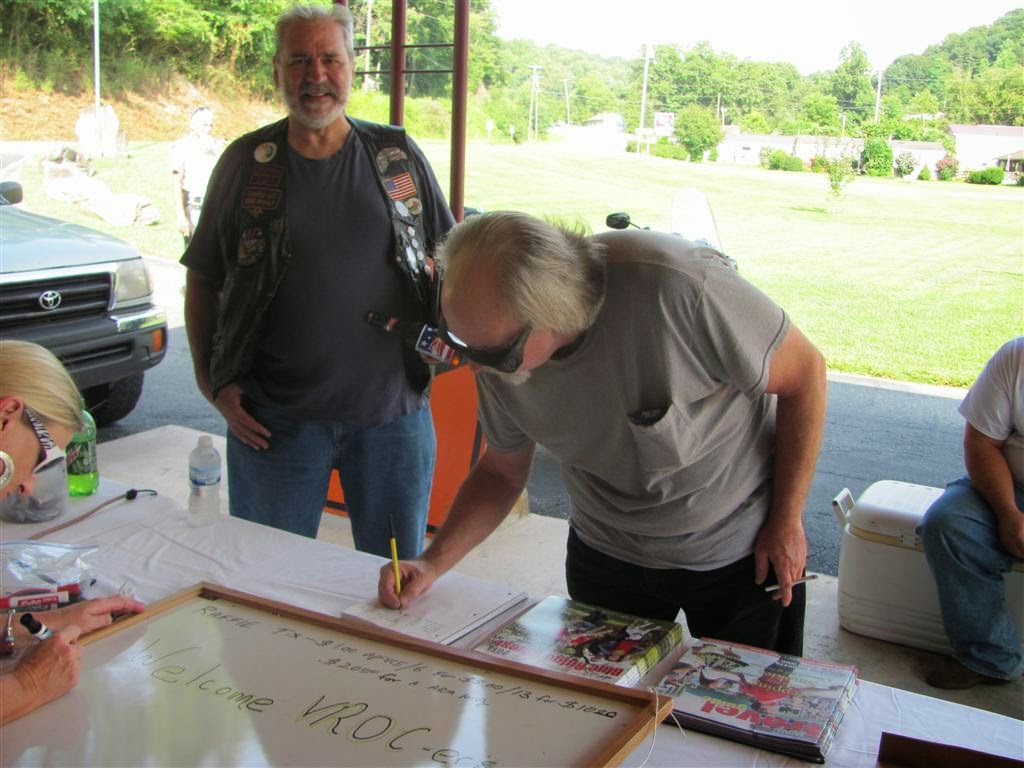 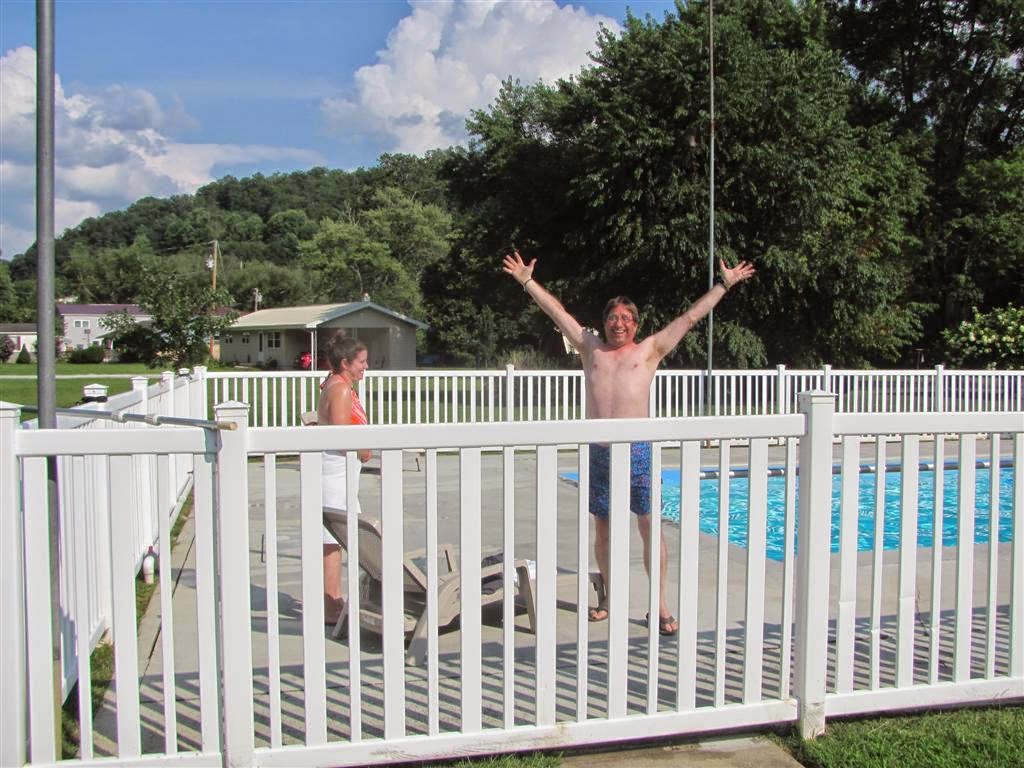 Yvette and a very white Mal hitting the pool 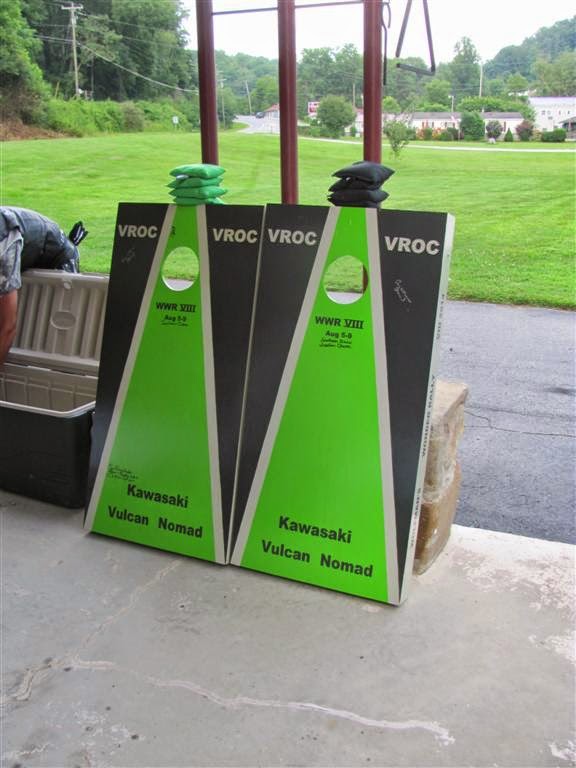 For the cornhole tournament

After the pool we decided to go for supper. Unfortunately, that is easier said than done on a Monday in this neck of the woods. We knew the Iron Skillet was open so that was our choice until I called them and found they closed at 7:00. It was 7:03. So I looked at the website for Granny's Kitchen in Cherokee. They closed at 8:00 PM. Sandy and I, Mal and Yvette, CC Rider and Lucky Al jumped on our bikes. The rest went in two trucks with Southern Draw and his brother. We got there well before 8:00 to find they were closed on Monday. The Lee Garden Chinese Buffet nearby was open and fed us.

In the buffet line, I talked to two older gentlemen fro Hot Springs, Arkansas who had two days to ride the area. I listened to what they were looking for and made a few suggestions.

As we stepped out the door after eating, the raindrops started to fall. Sandy jumped in one of the trucks while Bill suggested we might be drier if we rode down 441 and took 74 back, cutting in through Whittier. He was right. The rain stopped before we left Cherokee and didn't hit us until the last mile to the Lodge. The trucks came back via Highway 19 and reported that it rained hard all the way.

I saw on Facebook that Northrider from New Brunswick had stopped by while we were in Georgia. He posted a picture of himself and his bike beside our Avalanche. Sorry  we missed you, Victor. It's been too long. Also, a Drifter rider from Florida named Lance stopped in with a couple of friends. We invited them back later when it was less wet to meet some of the folks.

Charlie showed me the radar. There was a small cell centred right over us. Things looked dry a few miles in every direction. As the rain let up, Sandy and I headed back to our room. She was going to bed and my blog was two days behind. Now it isn't. 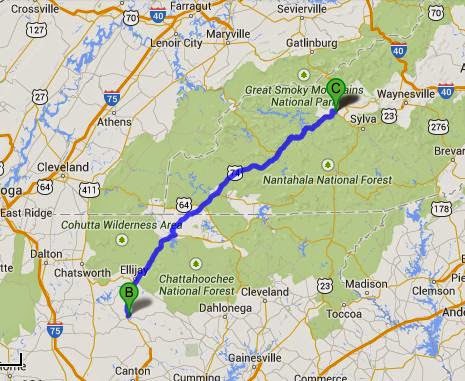 Love your blog! Nice to see people I know and care about. Sounds and looks like fun!