Once again, I woke up at 8:00 AM. Well, I woke up at 6:00 and then went back to sleep for a while. Lucky Al knocked on the door about 9:00 AM to see if we were going for breakfast. I told him we had enjoyed cereal and toast in the room so he went to town with Mal and Yvette. Meanwhile, Flip arrived from Greenville, SC on his Wing towing his camper trailer. Renata will be up later in the week. 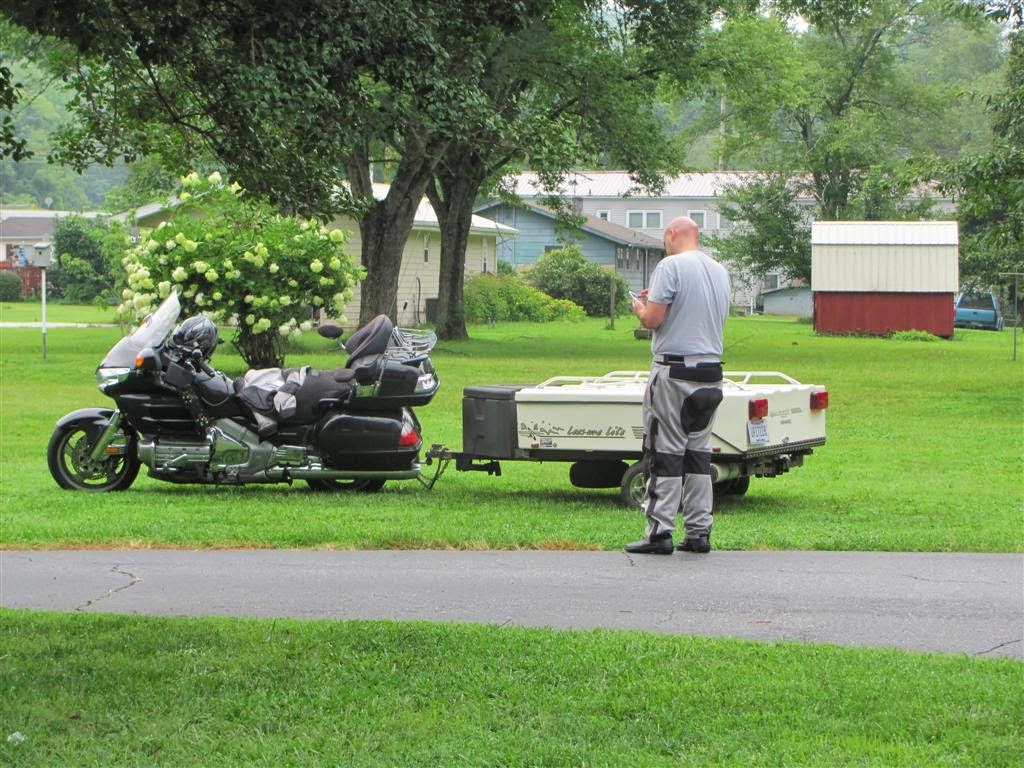 Southern Charm got CheapB an emergency appointment with her dentist. He was out and back before we knew it. The diagnosis was an abscess and the temporary remedy was antibiotics and Vicodin.. He decided he would skip the ride today. 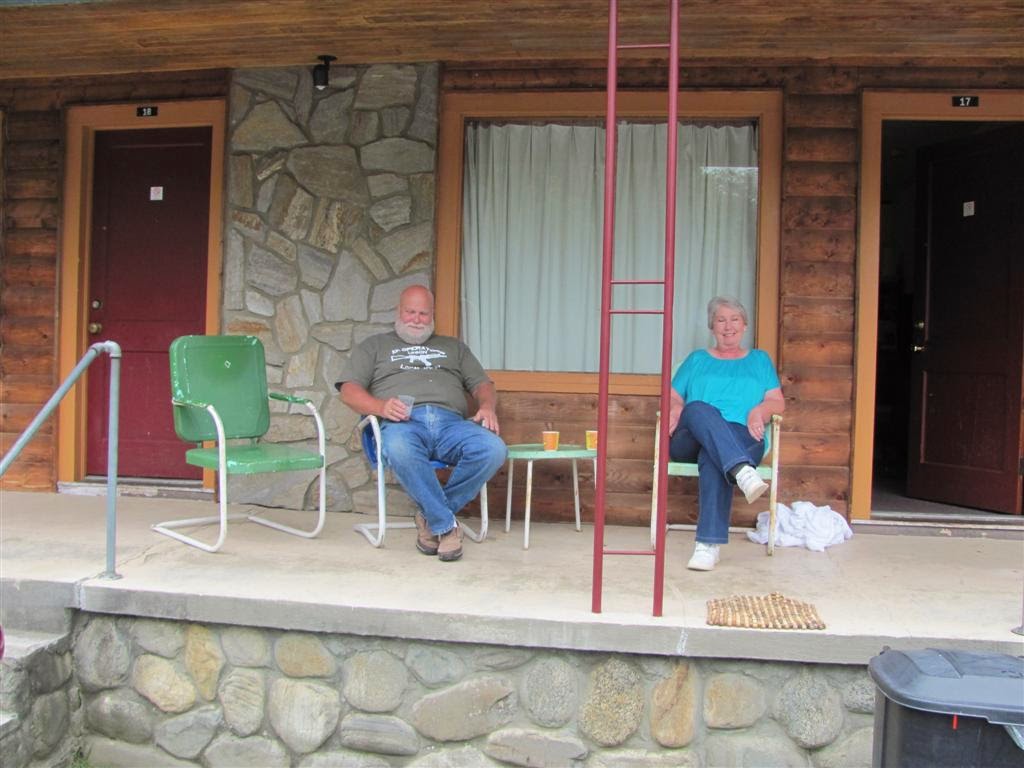 Since most of us have ridden around here many times before, our goal over the next few days is to show newbies Mal and Yvette a good sampling of the roads in the area. The Great Smoky Mountain Experience, if you will. Yvette would be riding the borrowed Nomad that they arrived on yesterday, while Mal would be on Southern Draw's Nomad.

With CheapB not going today, we decided to defer the Dragon/Cherohala ride until later. Instead, we opted to show the new kids the Blue Ridge Parkway. I led Flip, Blain, Yvette, Mal and Lucky Al out onto Highway 19. We rode to and through Cherokee and caught the very beginning of the Parkway, stopping at Jenkins Ridge Overlook to make sure everyone was doing OK. 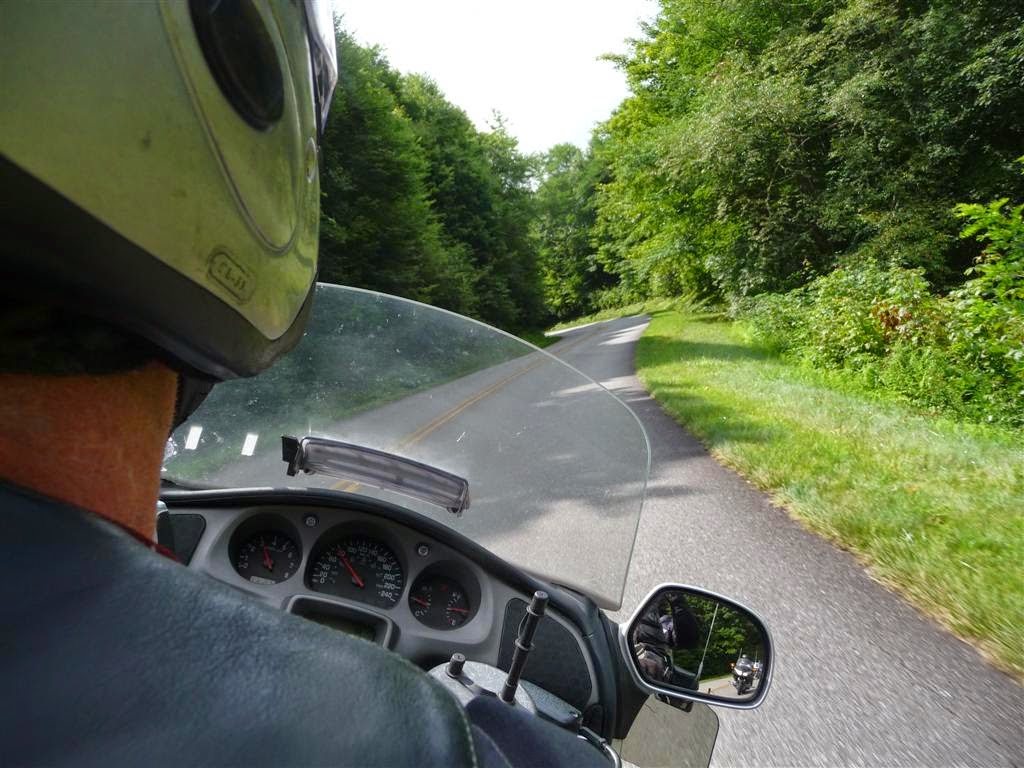 Starting up the Blue Ridge Parkway 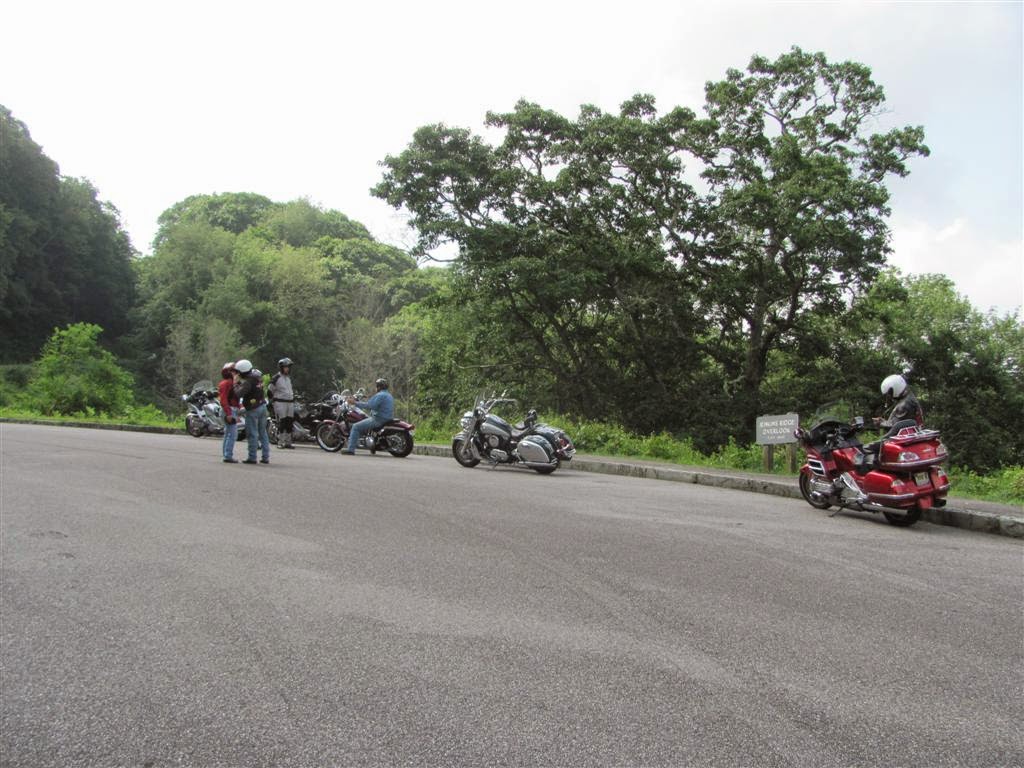 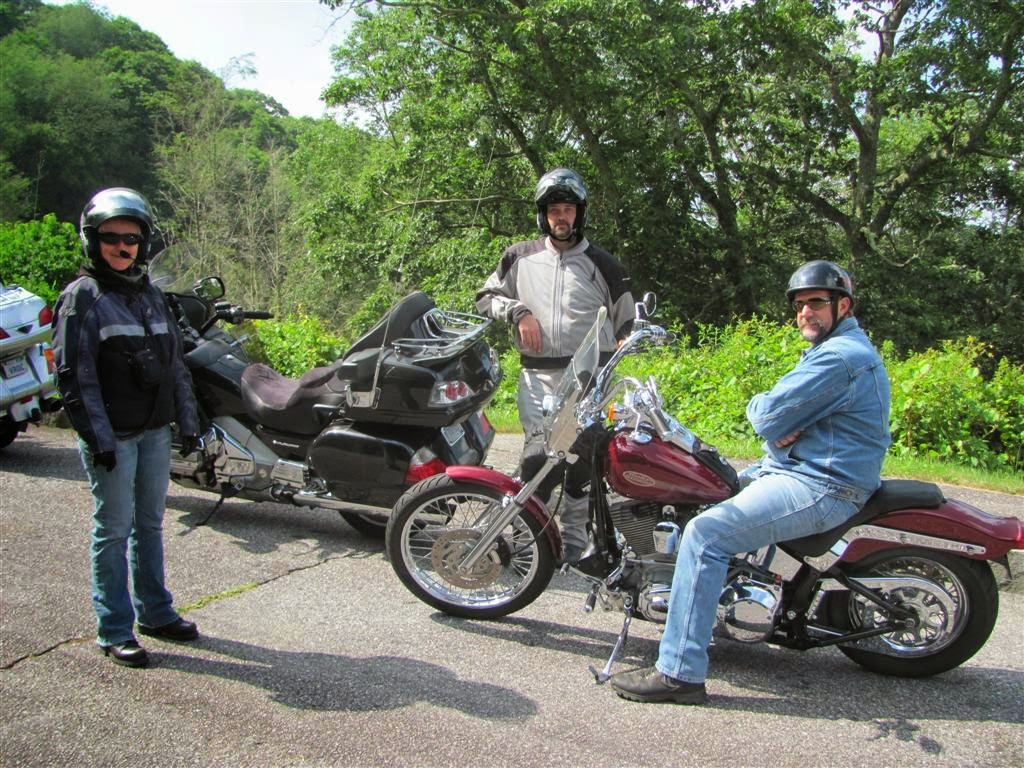 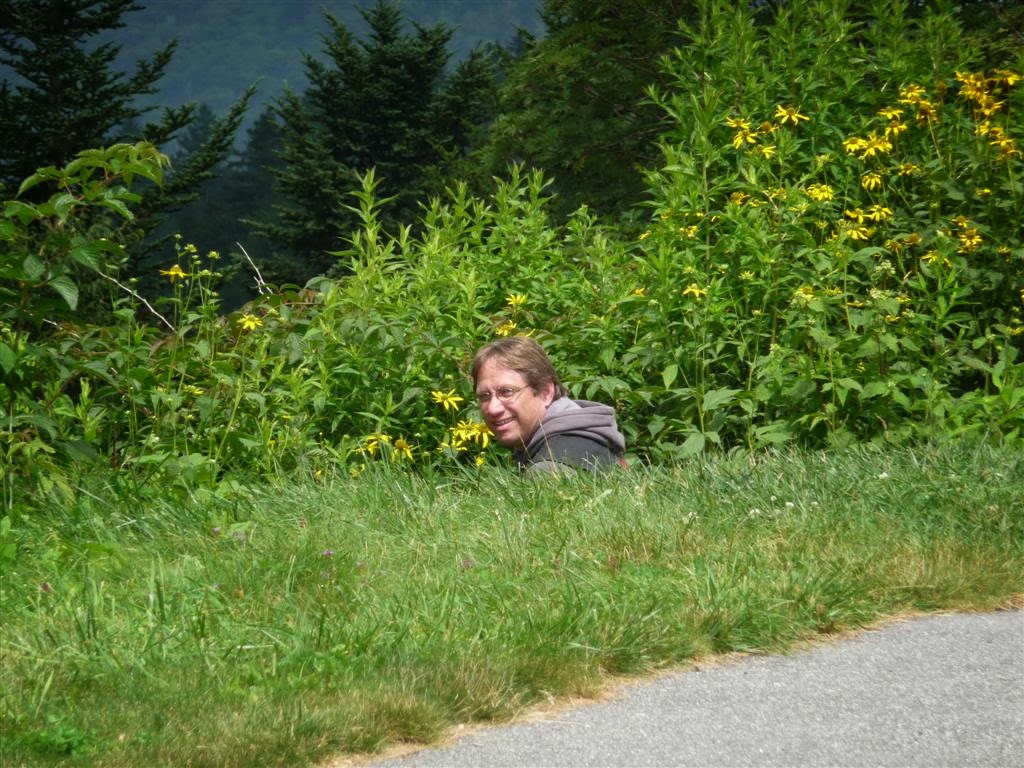 When we resumed, Flip moved around me and soon Blain followed. We rode on up to the highest point on the Parkway and stopped for the obligatory group photo by the sign. A young man traveling with his family took the picture and then we repaid the favour by taking a family shot for them. 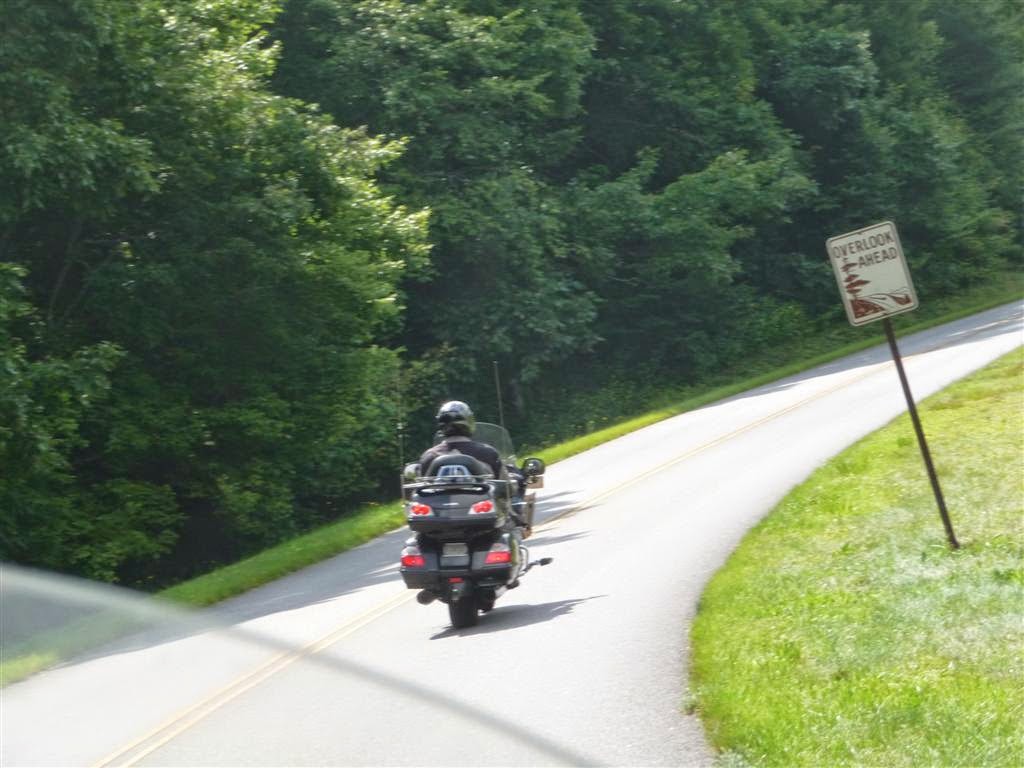 Flip to the fore 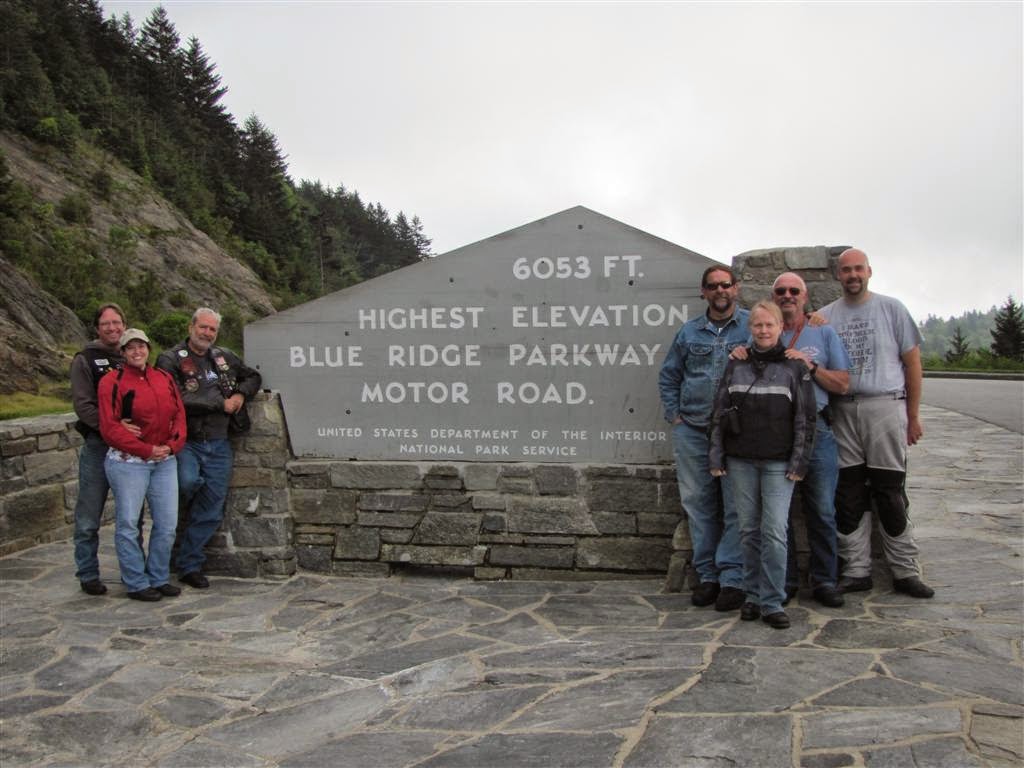 As high as it gets

We rode on to where US 276 intersects the BRP and stopped at Big Witch Mountain Overlook, where the sign was missing. 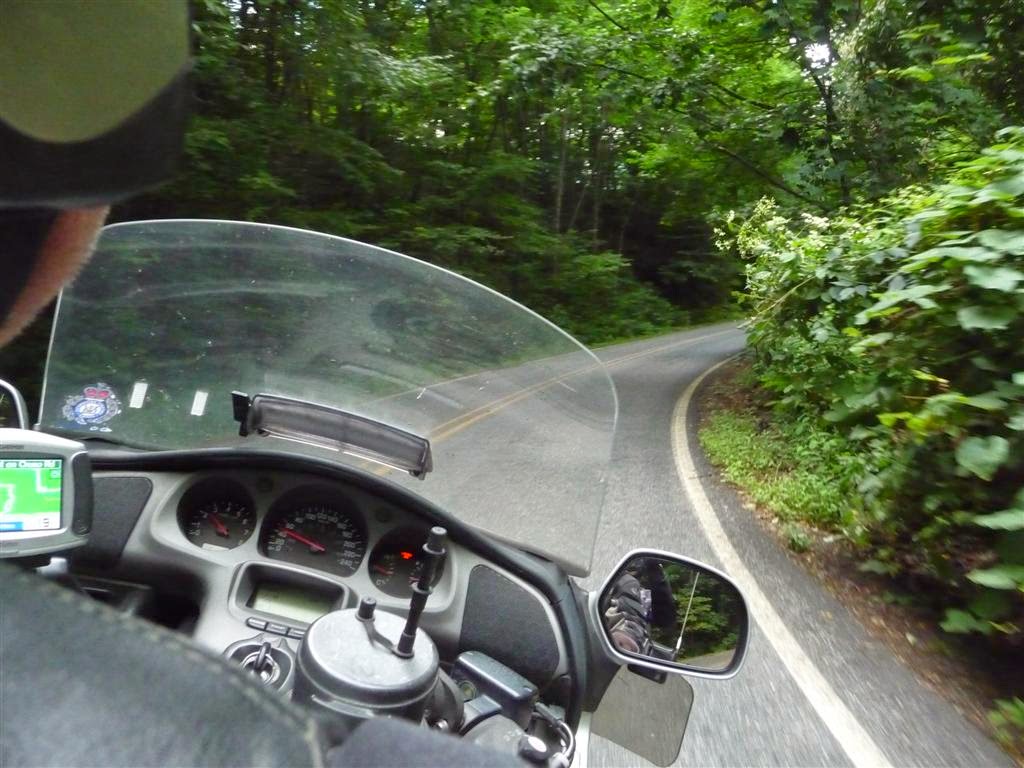 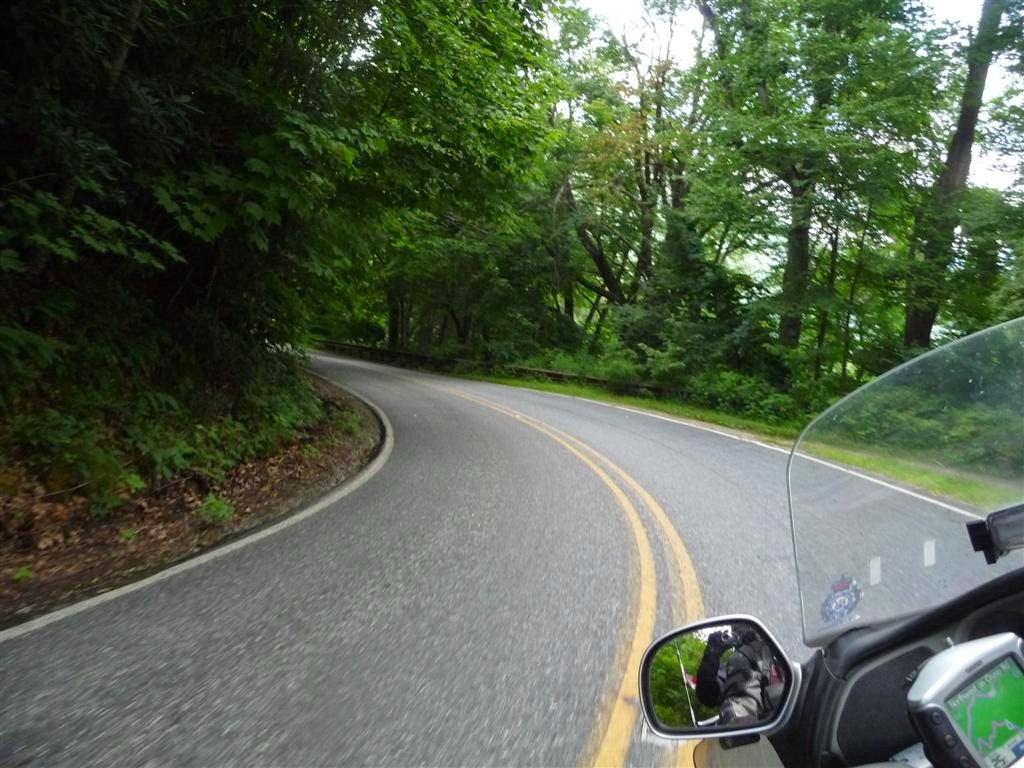 The ride down US 276 (aka the Pisgah Highway) was twisty and winding. Near the bottom, we were held up for about ten minutes by a flagman until the pilot truck brought the uphill line through. Then we followed it back down past where they were putting down new asphalt. The first vehicle waiting in line to go up was an Allied moving van. I would have paid to see that in some of the corners going up the hill.

As we approached Waynesville, we saw two gas stations advertising $3.38 per gallon. This was way below the going price, so I figure there was a little local gas war going on. In Waynesville, we stopped at Bogart's for lunch. The lunch crowd was just leaving and they found a table for the seven of us upstairs. The server was excellent, getting the food and the bills to the right people without asking. Sandy asked about the coleslaw when ordering and, after having it was described, was told that they would bring another side if she didn't like it. They substituted turkey for chicken on one of their signature sandwiches for Yvette. And the food was good. It was another excellent dining experience. 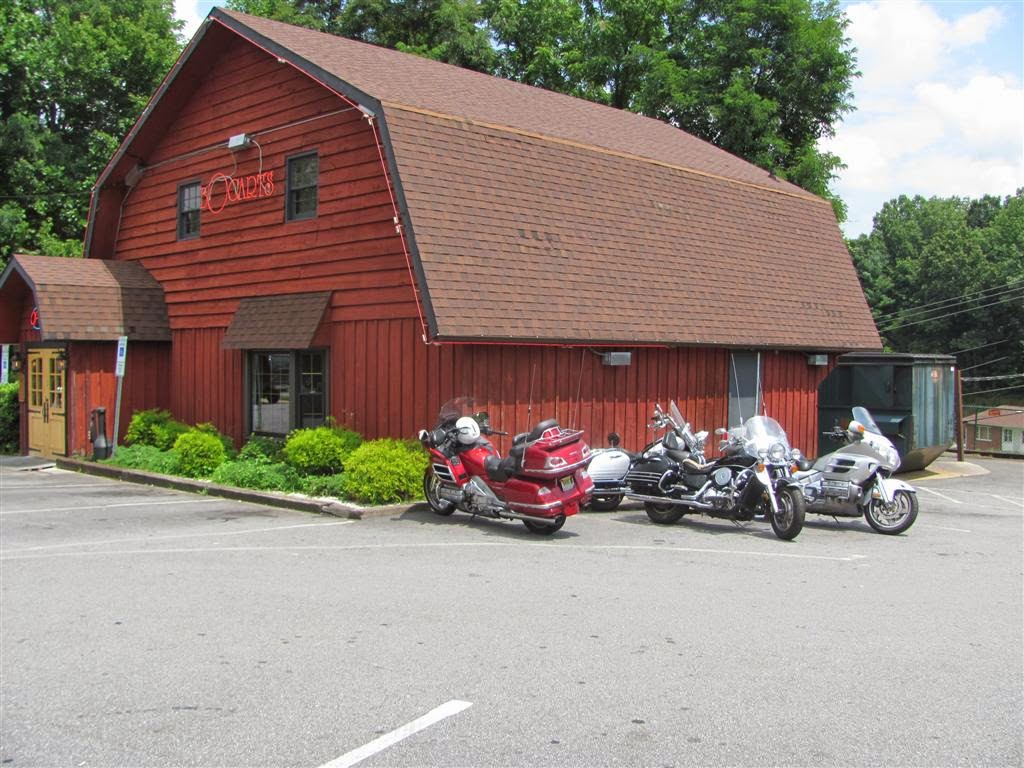 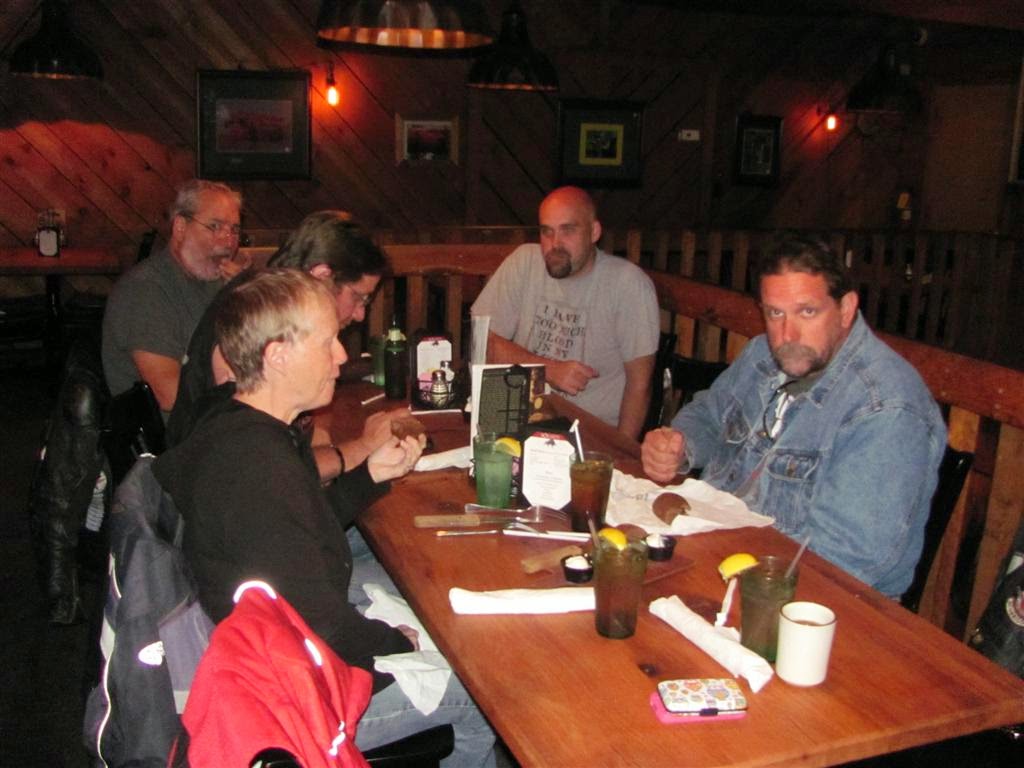 Blain has that lean and hungry look 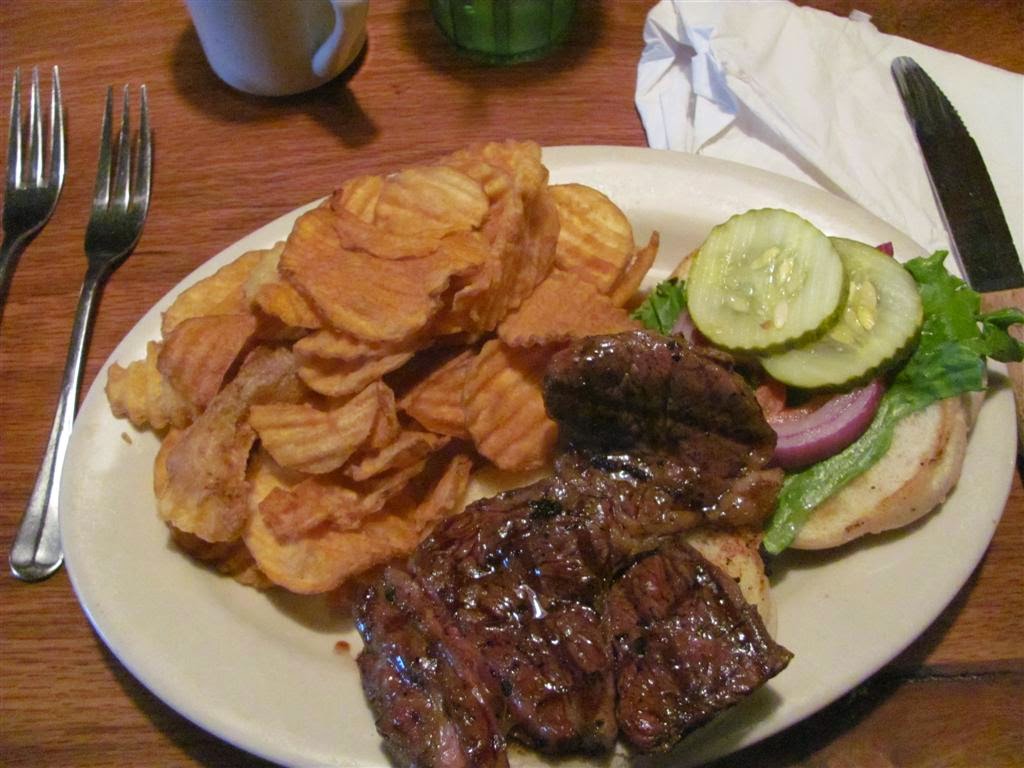 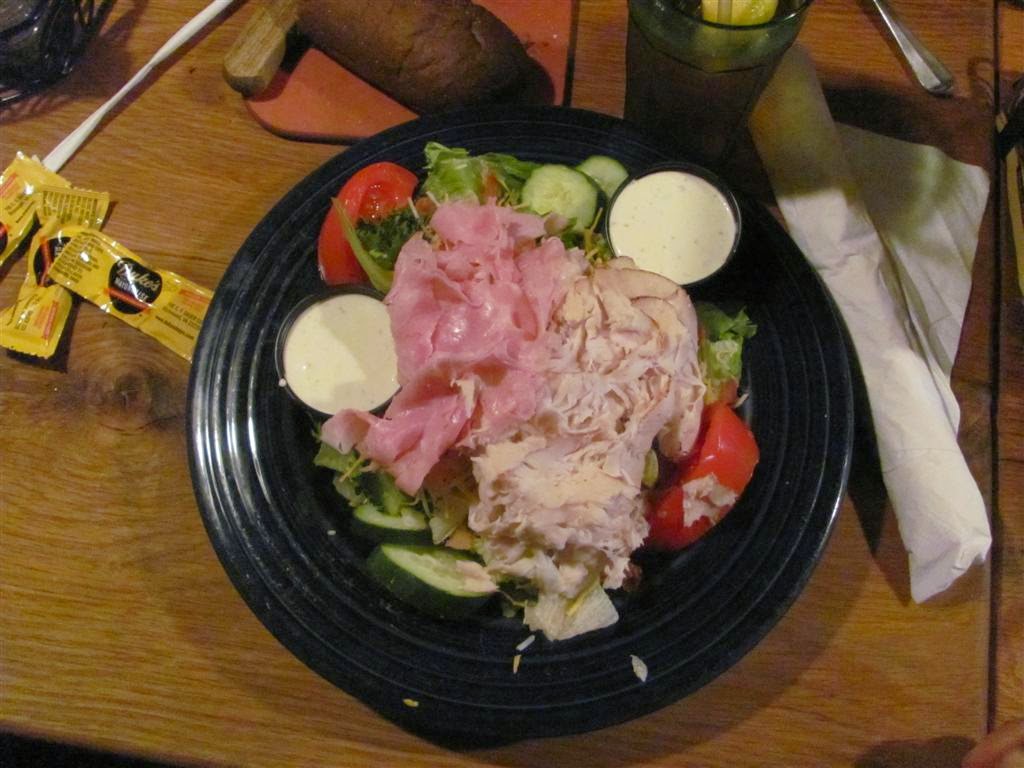 In a consignment lot across the street from Bogart's, I saw this 1995 34' Safari Trek diesel pusher. My next RV will come from the USA. 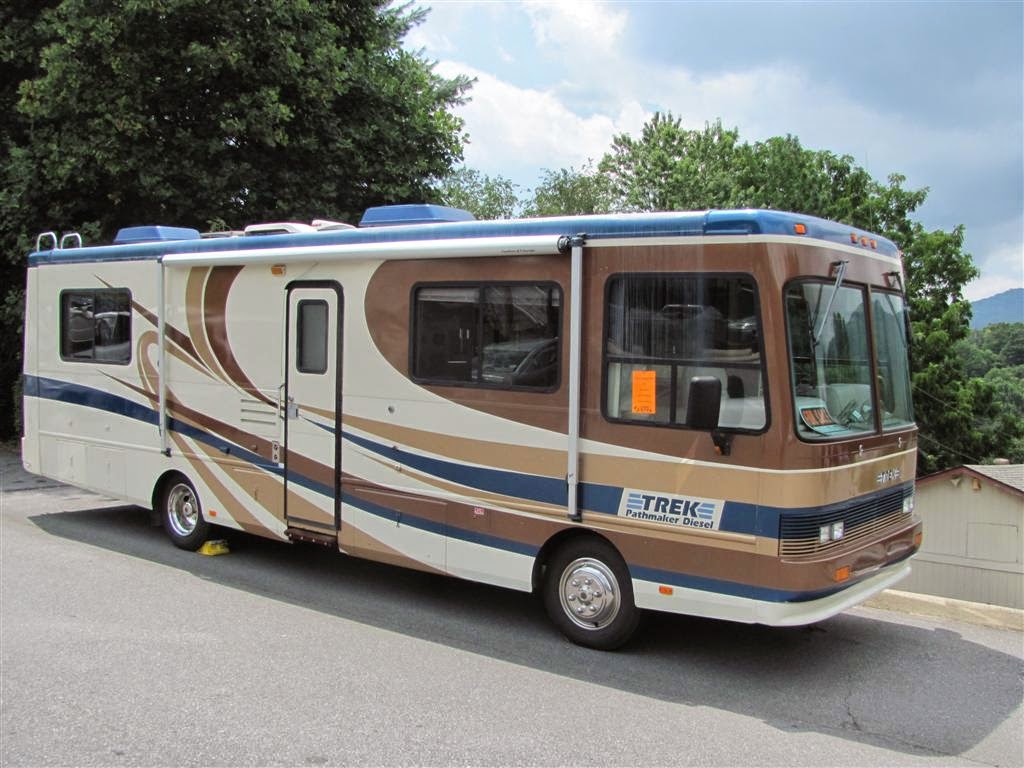 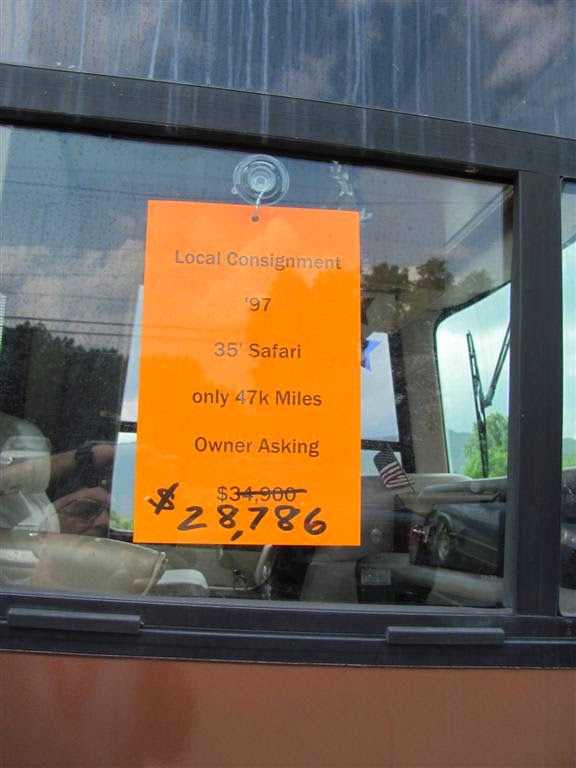 The price was right

We took 276 to US 19 and rode home through Maggie Valley. We topped up the tanks at Sunoco in Maggie for $3.53, a respectable price around here. Riding US 19 to Cherokee, there was no one ahead of us. This was another rare but appreciated experience. When we arrived back at Two Rivers, we found that people had been arriving in our absence. 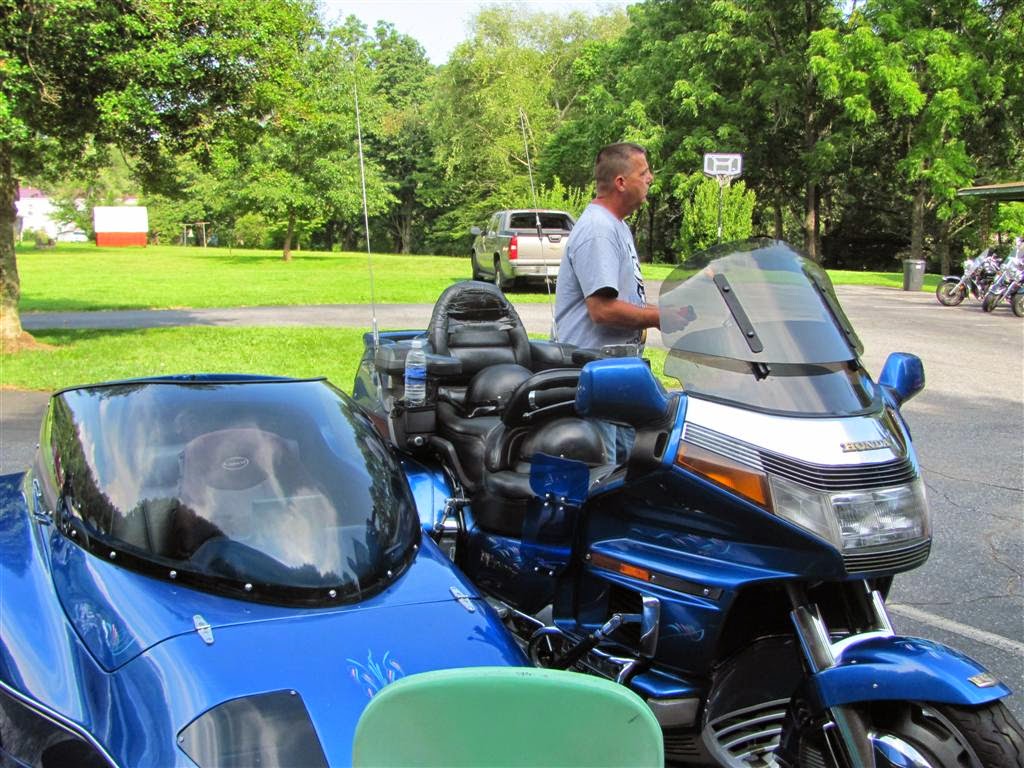 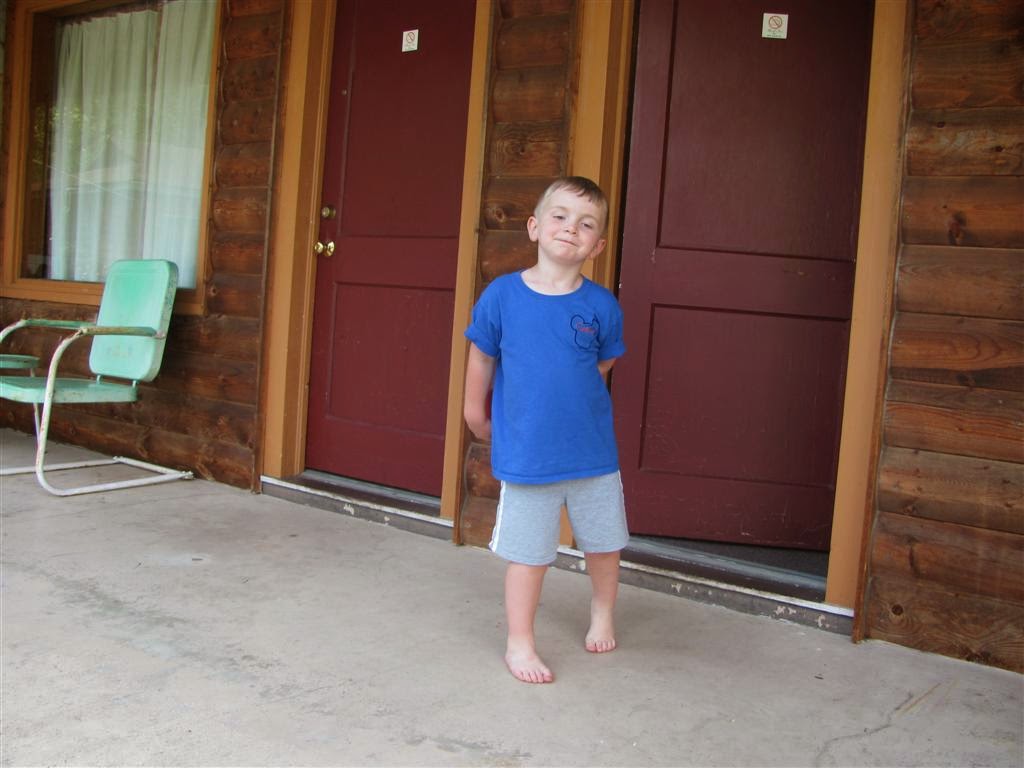 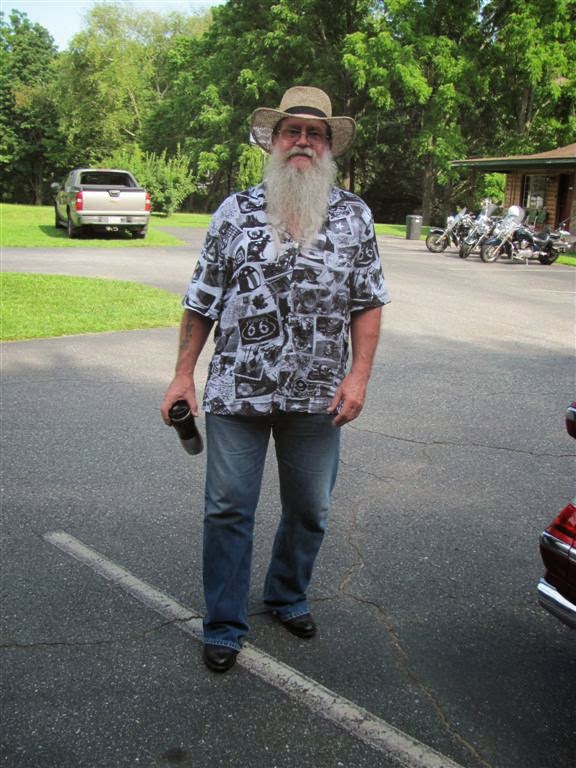 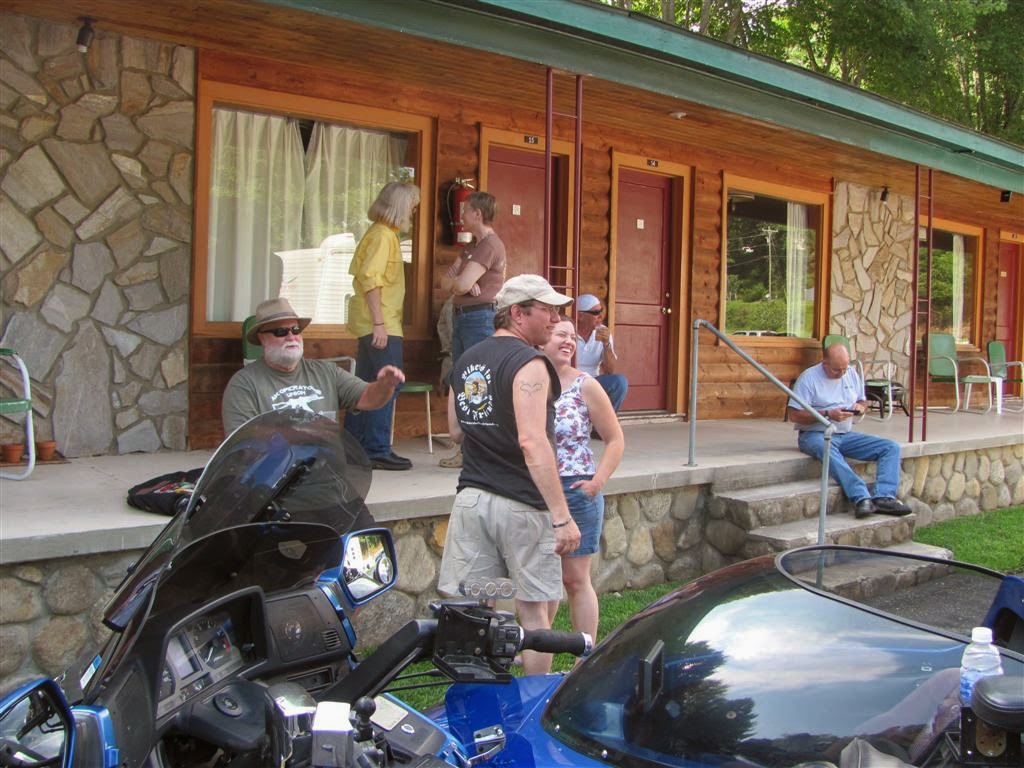 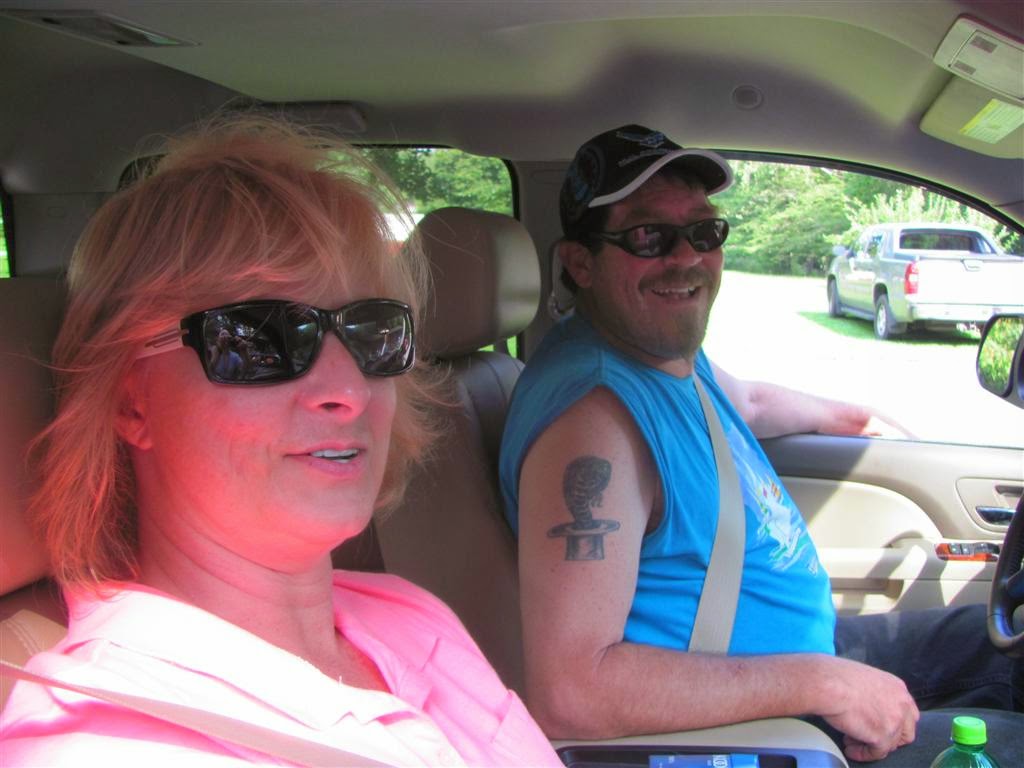 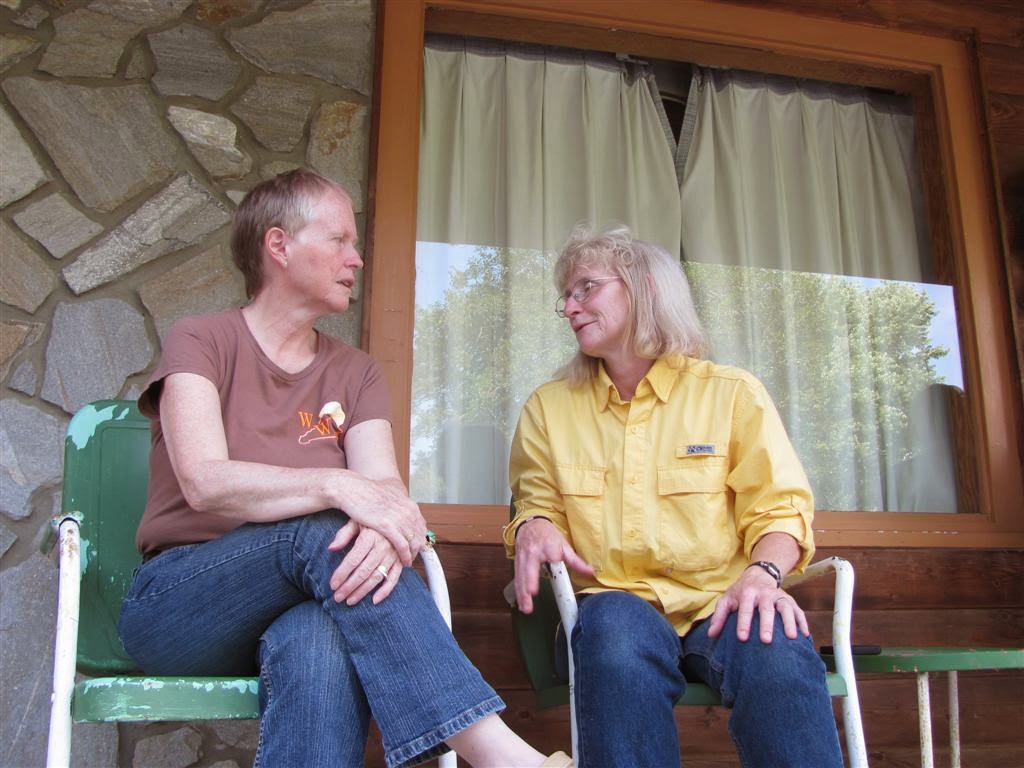 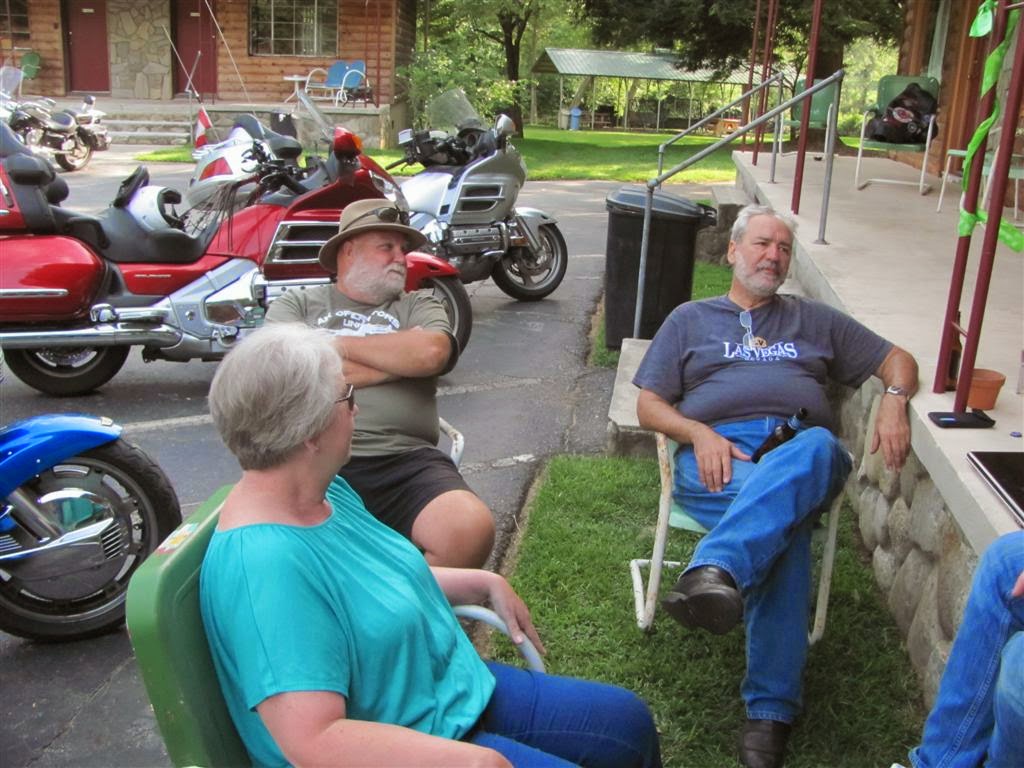 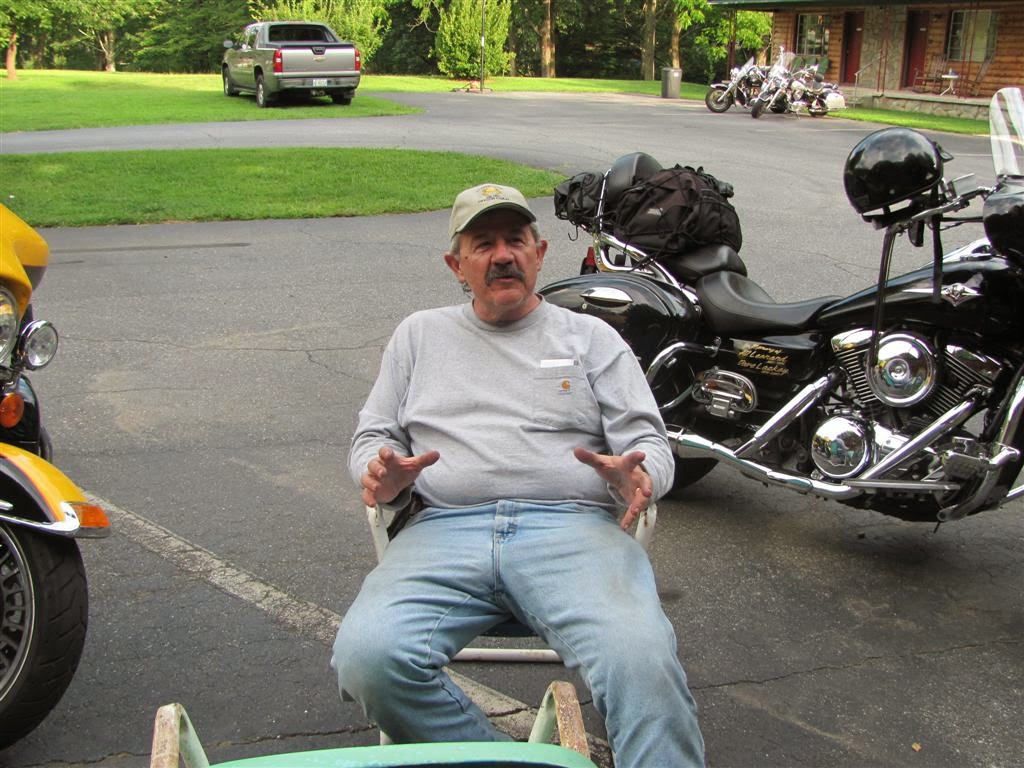 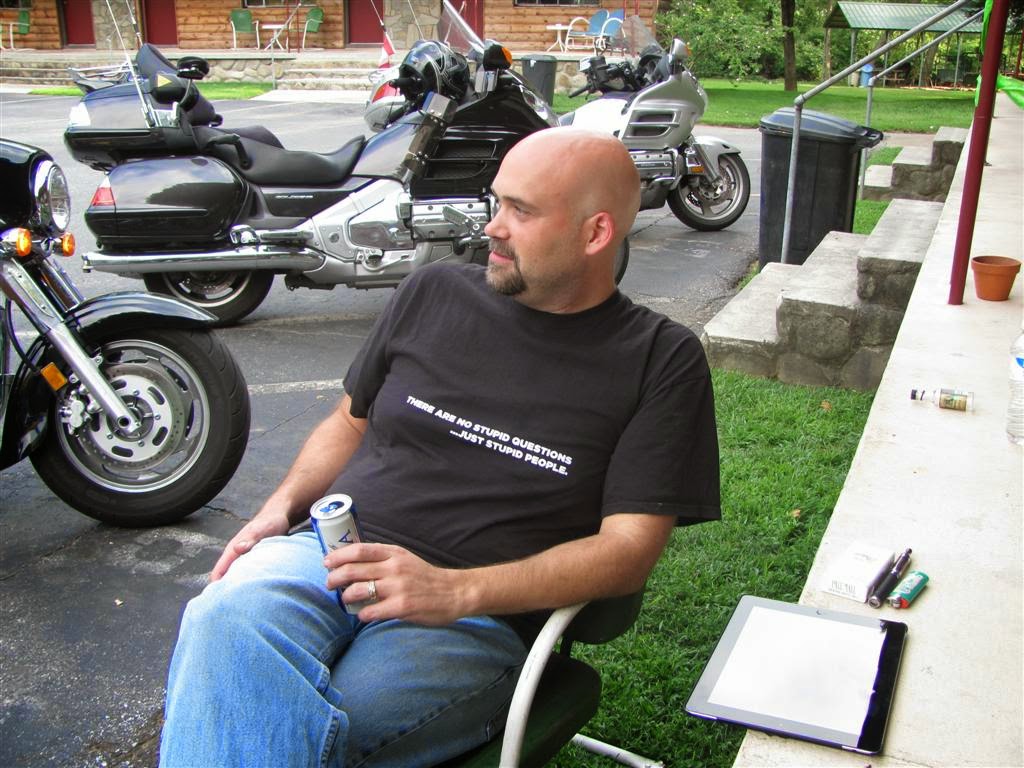 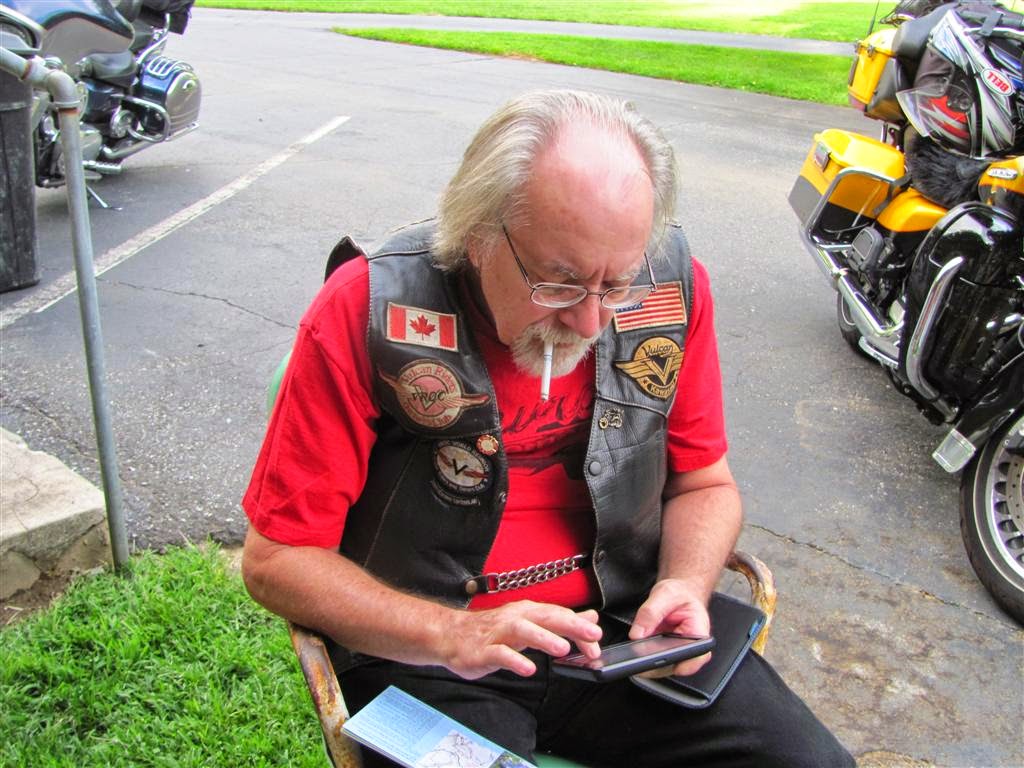 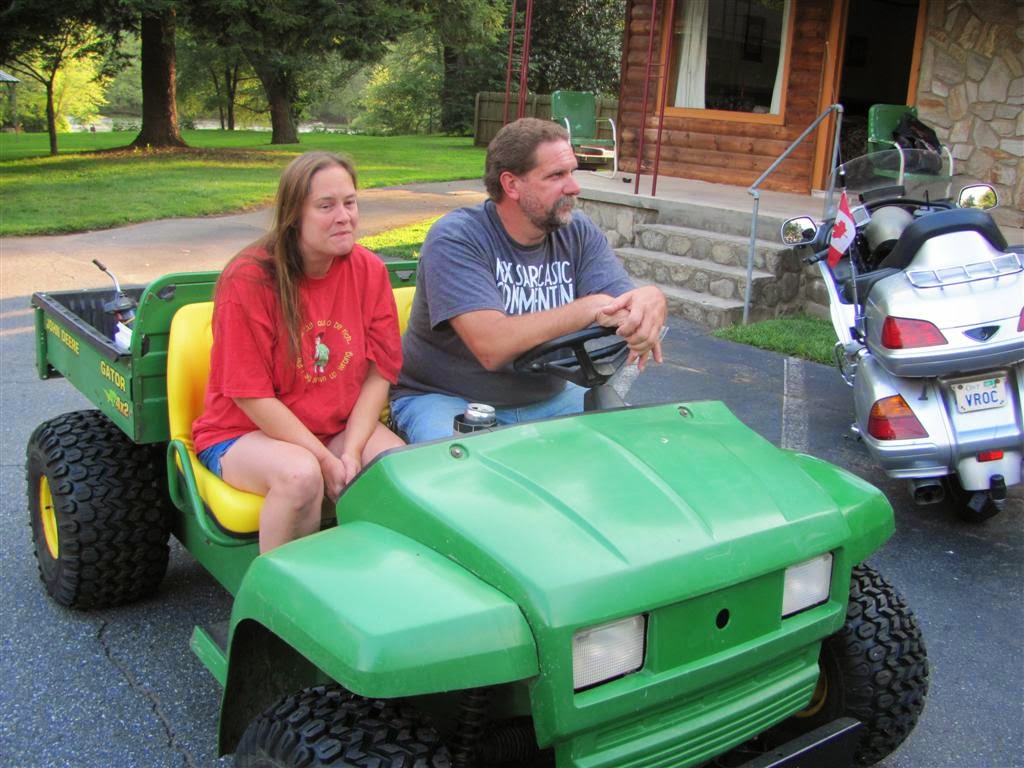 Our hosts Kathy and Blain

A group got together to go to Jimmy Mac's in Bryson City for supper but we weren't hungry after the late lunch at Bogart's. I understand that they were able to seat and feed eighteen people. After the sun went down, we spent the evening socializing in front of the rooms and by the fire in the pavilion. I think I was among the last to go to bed at midnight after a long talk with Phillip, Mal and Wrong Turn near the fire. 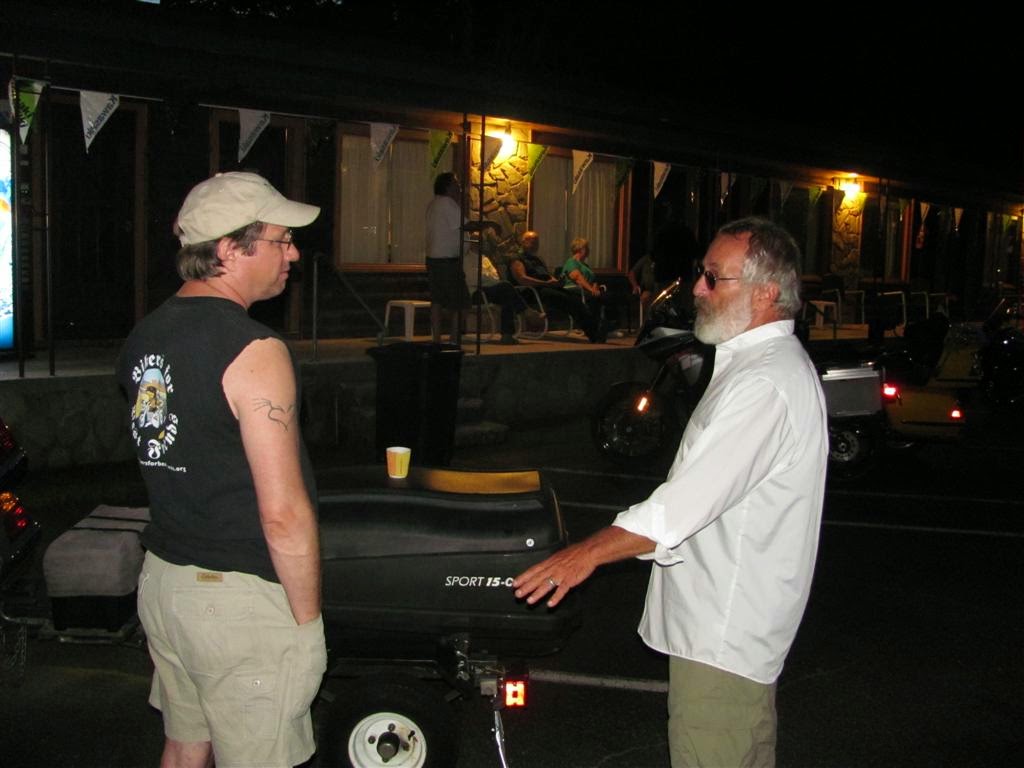 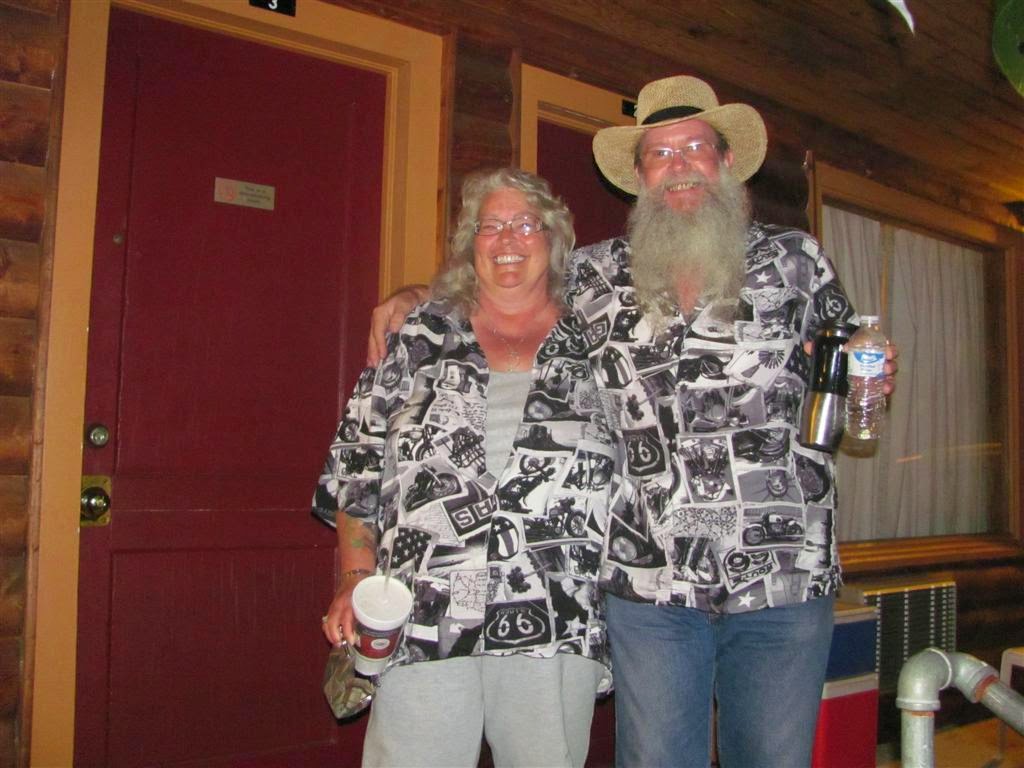 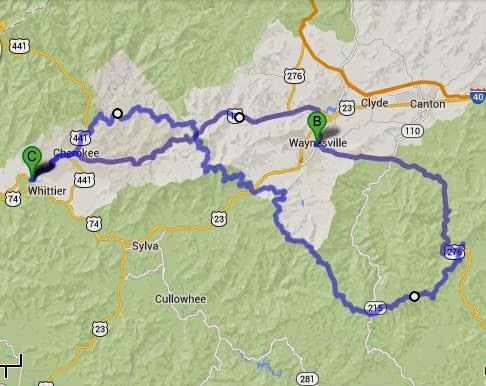