We woke up to thunder and rain. Mal & Yvette had to leave today to get back to Alabama and catch a flight home to Colorado. CheapB and Wanda left with them. A few others suited up to ride into Bryson City and have breakfast with them. Sandy and I had raisin bran and toast in our room again, a more cost effective and healthy (albeit less tasty) option when compared to traditional southern breakfasts.

The rain eased after a while but radar showed it would be back before long. That took the joy out of planning a ride today, so we just sat outside and visited with the others. At lunch time, Blaine and Kathy got out some of the leftover food from the Meet and Greet last night and fired up the grill. We enjoyed a fine lunch. It's hard to find hosts as good as they are no matter wherever you might go. 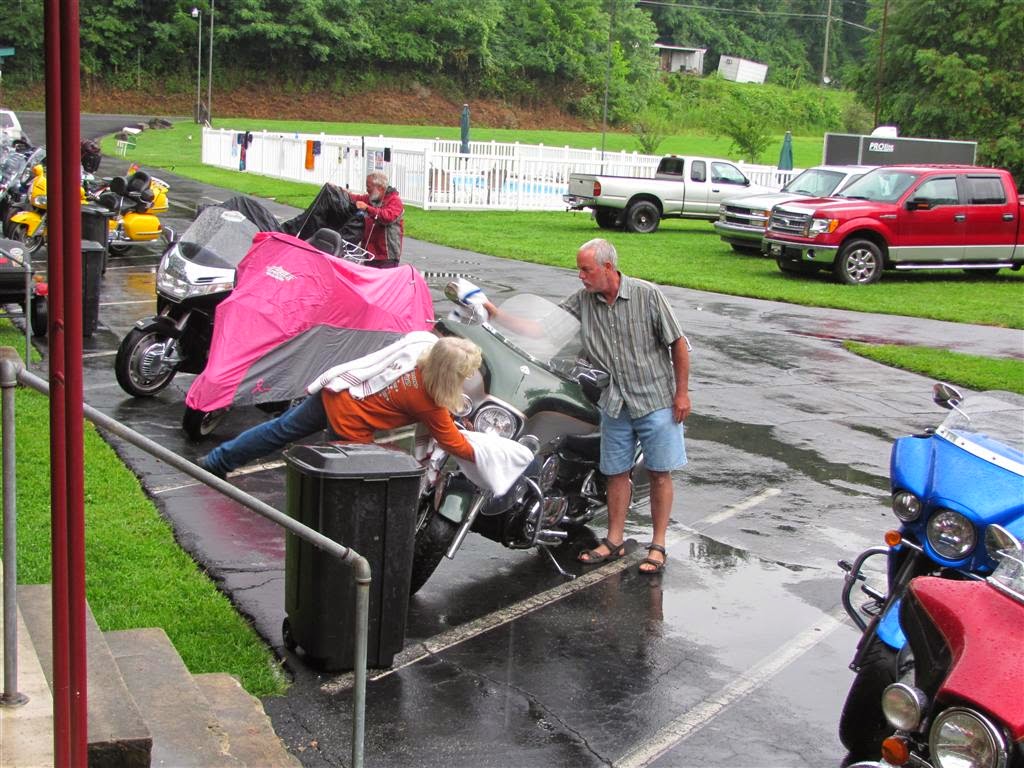 Teresa & Butch wiping the Nomad down between squalls 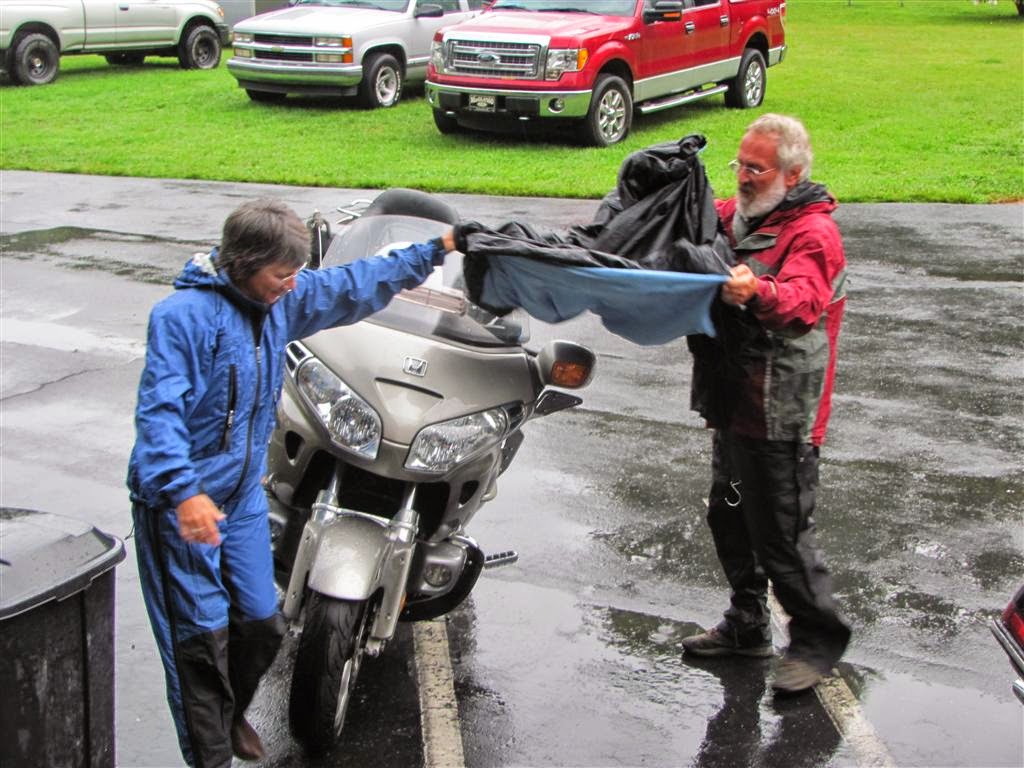 Wrong Turn and KT back from breakfast 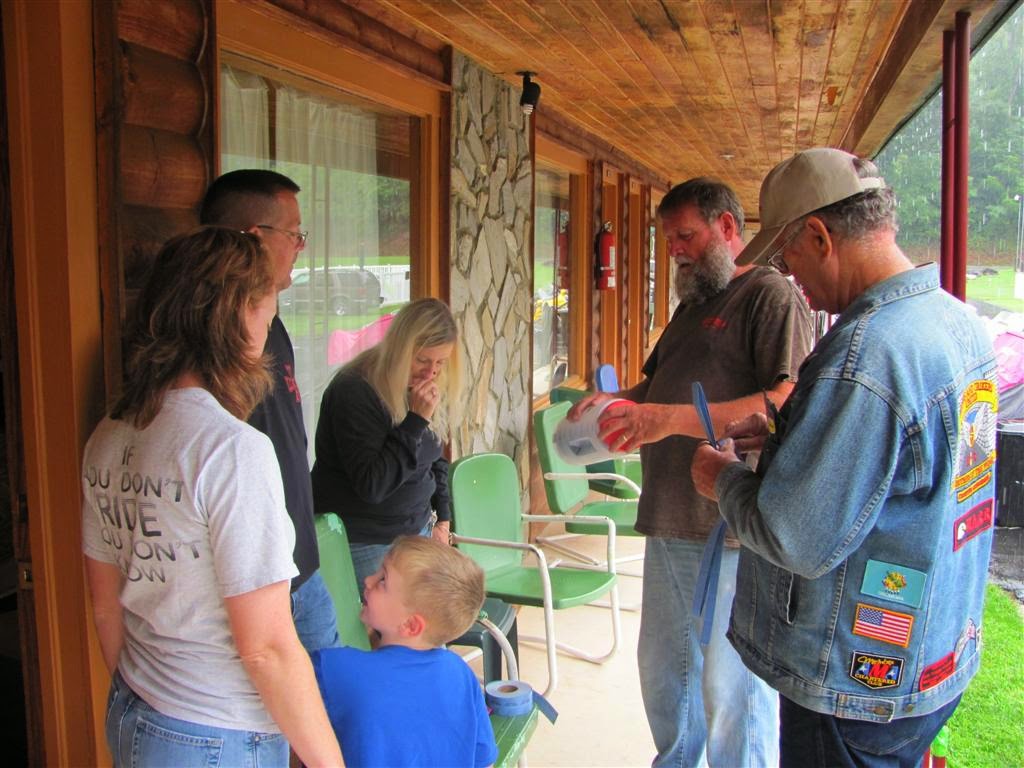 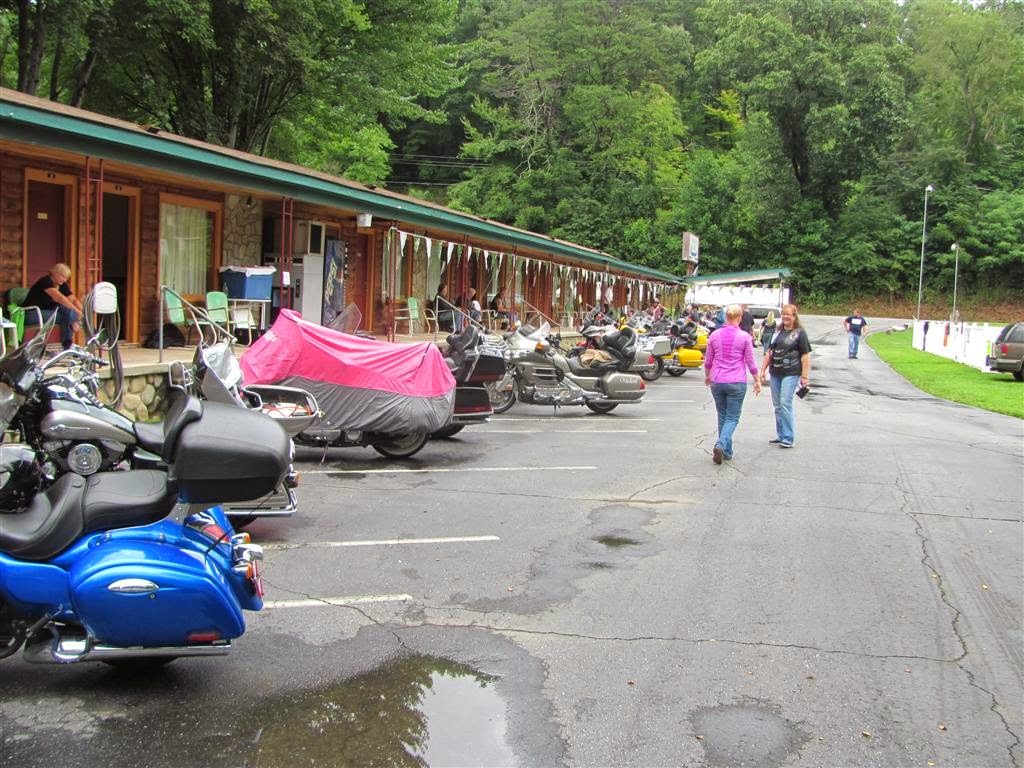 Some bikes didn't even get uncovered

After several waves of rain throughout the day, we started making plans to head into Cherokee to the Chestnut Inn (formerly the Holiday Inn) for the banquet. I had offered to take Phillip, Jaime and Caleb in the truck. Unbeknownst to me, Sandy had also offered a ride to Laura and Bassman. The truck seats five, but we can squeeze in six if one is small. We had now committed to seven. Since the rain looked like it had let up until later in the evening, Phillip and I took the bikes while Bassman drove the Avalanche with the others.

We followed the Avi to Cherokee at a very slow pace, wondering what was going on. When we got to the hotel, Laura was laughing as she told us Bassman hadn't realized the truck speedometer was in kilometers. As he got up to 50 MPH, he looked down and saw the needle at 80. Figuring it was a very fast truck, he slowed down. Way down. 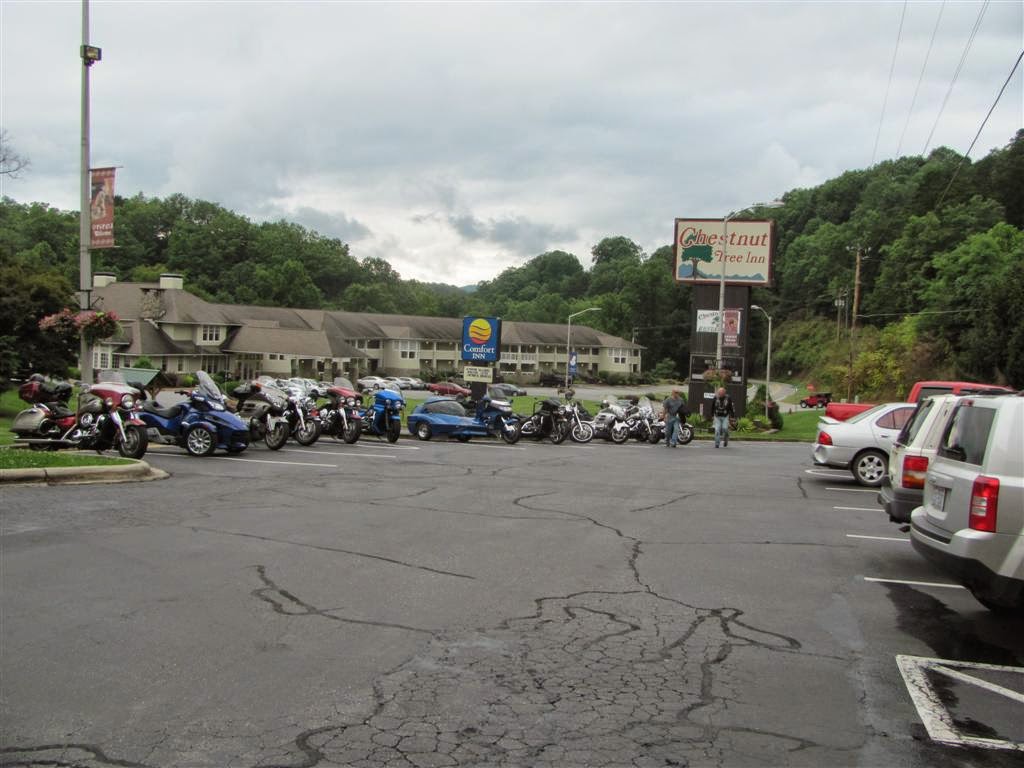 VROC at the Chestnut Inn

The banquet consisted of a seafood and prime rib buffet. The only thing that was extra was the crab legs. The staff came around and asked if we wanted the legs but Sandy and I declined. Poor Phillip hadn't realized that seafood was on the buffet. He was allergic and was starting to react to the smells, but managed to get through the evening without having to resort to his EpiPen.

I managed to get through a couple of servings of prime rib cut from the rarer end, along with a healthy helping of veggies. I skipped the salads as I usually do at a buffet. My stomach capacity is finite and it only makes sense to focus on the big ticket items. 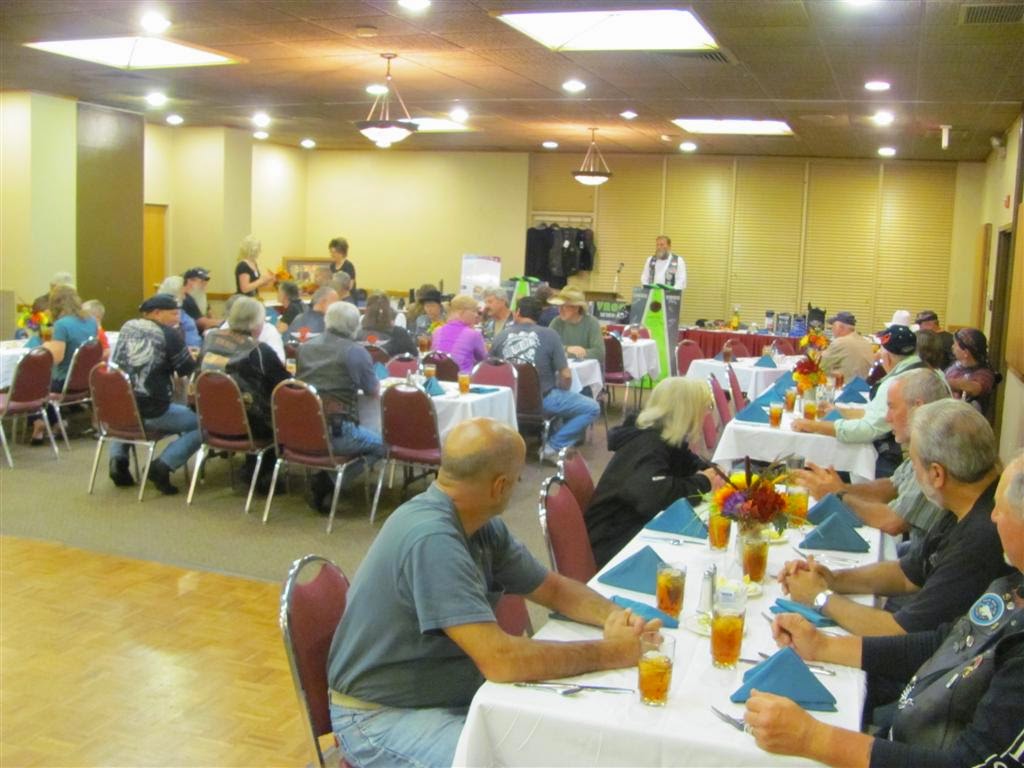 Waiting for the food to come out 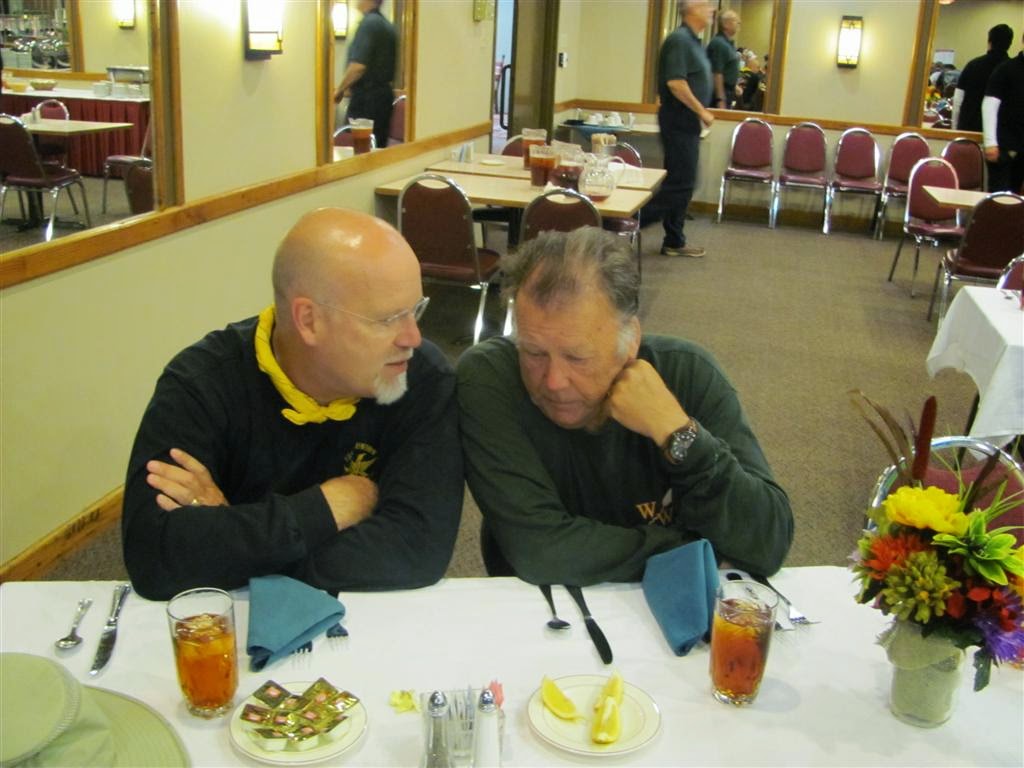 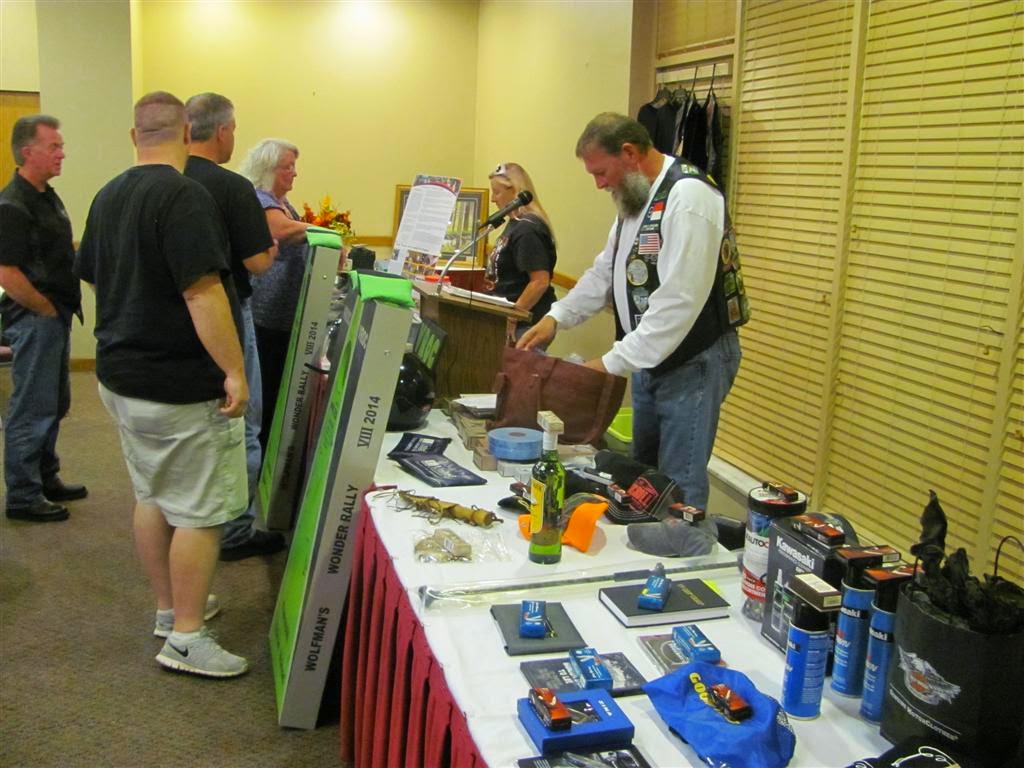 When the meal was done, Southern Draw and his lovely spouse, Southern Charm, began the after dinner segment. The raffle prizes were arrayed on a long table at the front of the hall. I need to extend thanks to Riders of Kawasaki and, even more, to Kawasaki USA and the many local businesses and VROC members, for their contributions.

Before we got to the raffle, Bill called a series of names and had those people come up to the front. These were all US military veterans and he wanted to acknowledge them and thank them for their service. He presented each of them with beautiful knives from his extensive collection. I also received a Buck Creek knife for being the first one to sign in at the rally. 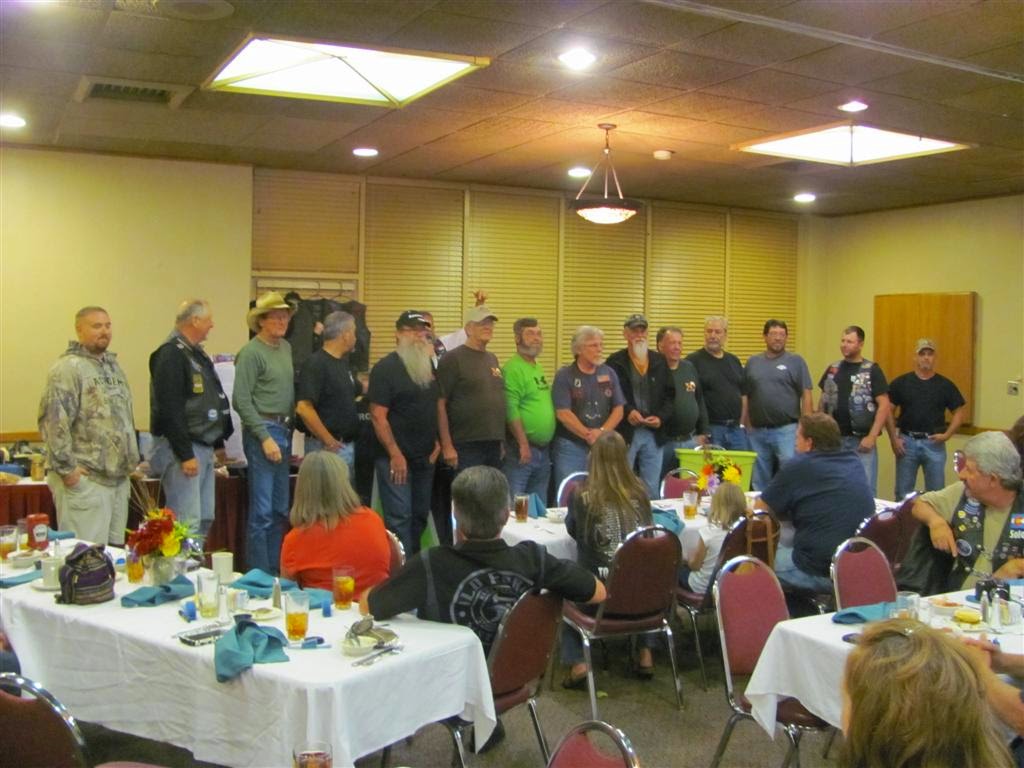 Southern Draw then reprised his rendition of Vince Gill's Rest High On That Mountain in honour of Wolfman and all the members we have lost over the years. As he sang, I closed my eyes and let a slideshow play out on the back of my eyelids. Wolfman, of course. And Gunslinger, Kilo, Chuck Burt, Chunk, Snake and so many others. More recently, there were Gator, Lonnie and April. By the time Bill's mellow tones faded away, my eyes were kind of wet. It hurts to lose friends but the joy of knowing them makes it worth the pain.

Finally, it was time for the raffle. SD called out numbers and people came forward to pick up their prizes. Some weren't paying really close attention and needed to be nudged to check their tickets. Still, there were a lot of happy riders who left the hall with armloads of swag. 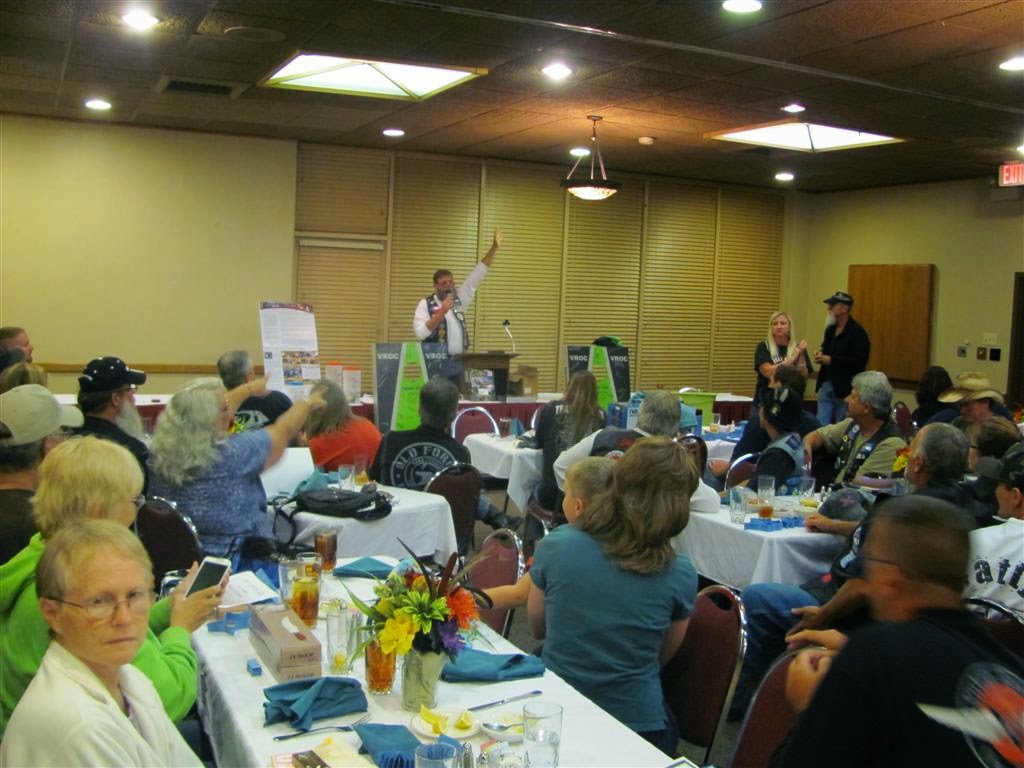 After the prizes were drawn, there was supposed to be music at the Chestnut featuring Somebody's Child (Southern Draw's son and his fiance). In a moment of brilliance, they suggested moving the venue back to Two Rivers. This saved the attendees having to decide whether they wanted to stay here or go back.

Jaime decided that she and Caleb would go back in their sidecar outfit with Phillip, while Bassman drove Laura and Sandy back at a faster clip than he had come up. I hung around for a while talking to some people and then got on the Wing to head back alone. Leaving Cherokee, I got behind a slow moving SUV and decided to pass him on a short straight stretch where nothing was coming the other way. Because it was a solid line, I leaned on it and left them way behind. I also passed a couple on a Harley before arriving at the Lodge. Wouldn't you know it, the SUV pulled in behind me driven by the son of a member. Dirt Digger said there was some mention of crazy-ass riders:-)

We mingled in the parking lot and in front of the rooms to tunes from Somebody's Child. Joker, in an attempt to bolster the amount to be donated from the raffle, got people to pledge money if Susan ZMean1 would wear a pink T-shirt. That was amusing because Joker had already been modeling the very same shirt. Real men can wear anything, I guess. 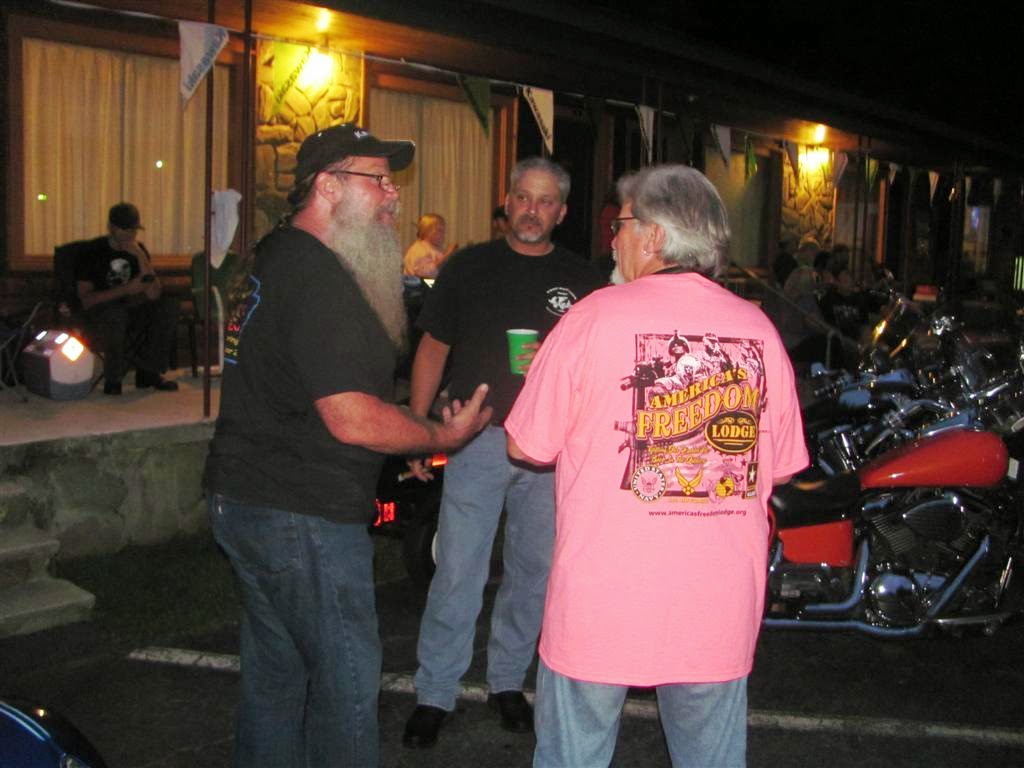 Joker, secure in his masculinity 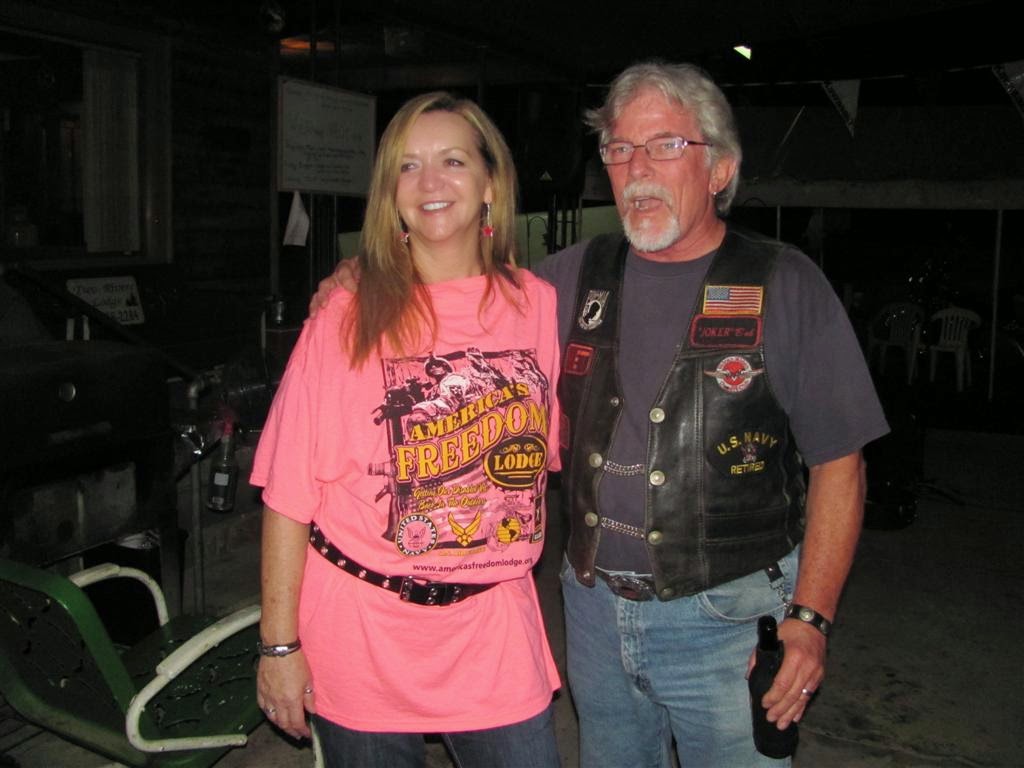 Now Susan is wearing the shirt 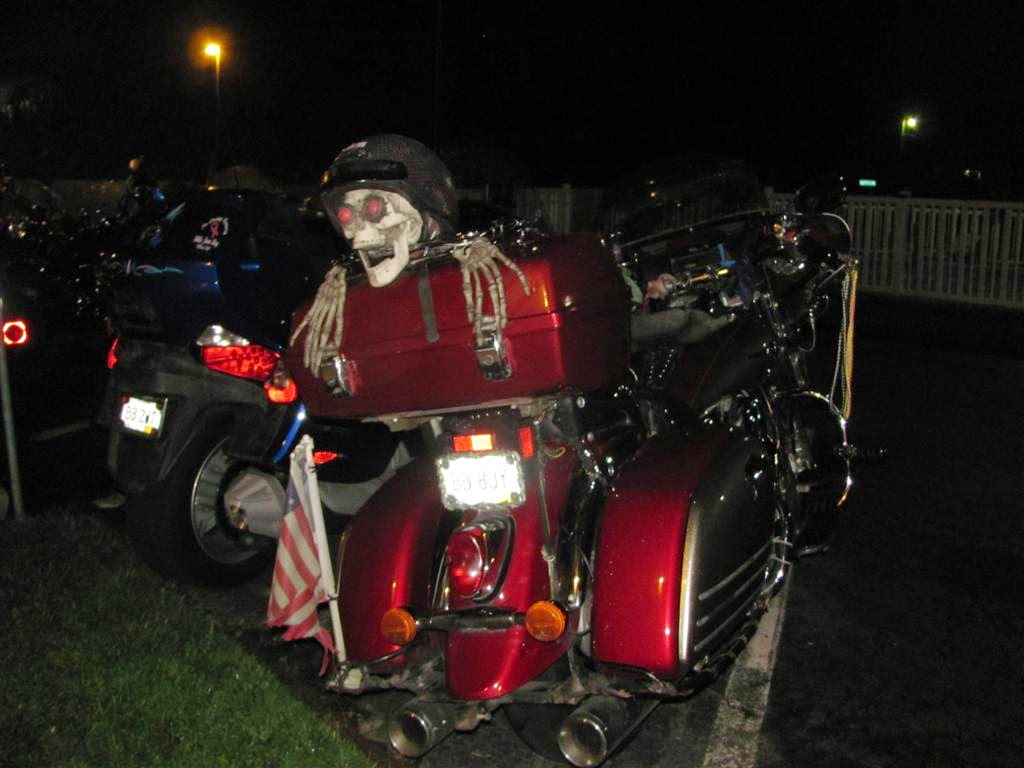 Some people have stuffed animals 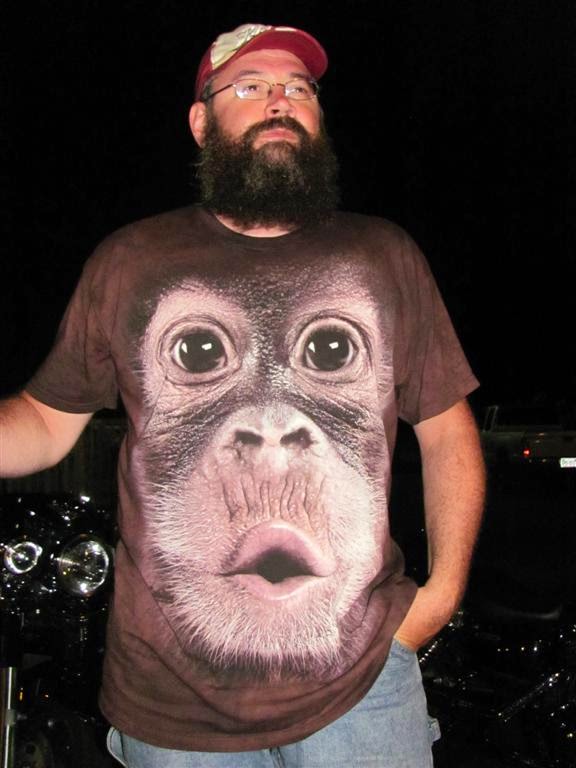 Pecos wearing a shirt that is just plain scary