The forecast rain was nowhere to be seen this morning. Wrong Turn & KT, Phillip, Jaime & Caleb and Butch & Teresa pulled out early heading for home. Some of the rest rode out for breakfast while Sandy and I stuck with out raisin bran and toast. I missed biscuits and gravy plus bacon and eggs (although not so much grits) but my arteries thanked me even if my taste buds didn't.

Further checks of the weather radar showed nothing of significance on the horizon, so we decided to go for another ride. Our second visit of the year was drawing to a close and we still hadn't taken our first run across Wayah Road. Flip, Blain, Rainman, Southern Draw and Missouri riders Watchmen, Liz, Rick and Theresa decided to join us. Wayah Road runs from the Nantahala Gorge to Franklin and, despite reports of some gravel in the corners, carries a five star rating.

We left the Lodge and Flip led us down US 74 into the Gorge. Just before we got to the two-lane winding part, some twit in a pickup towing a boat poured on the coals to stay ahead of us. Then he drove slower than we liked through all the curves. Some people's kids. No matter, we figured we would be done with him when we turned on Wayah, so we cruised along waving at rafters and people riding the scenic train out of Bryson City. There is something for the bucket list. 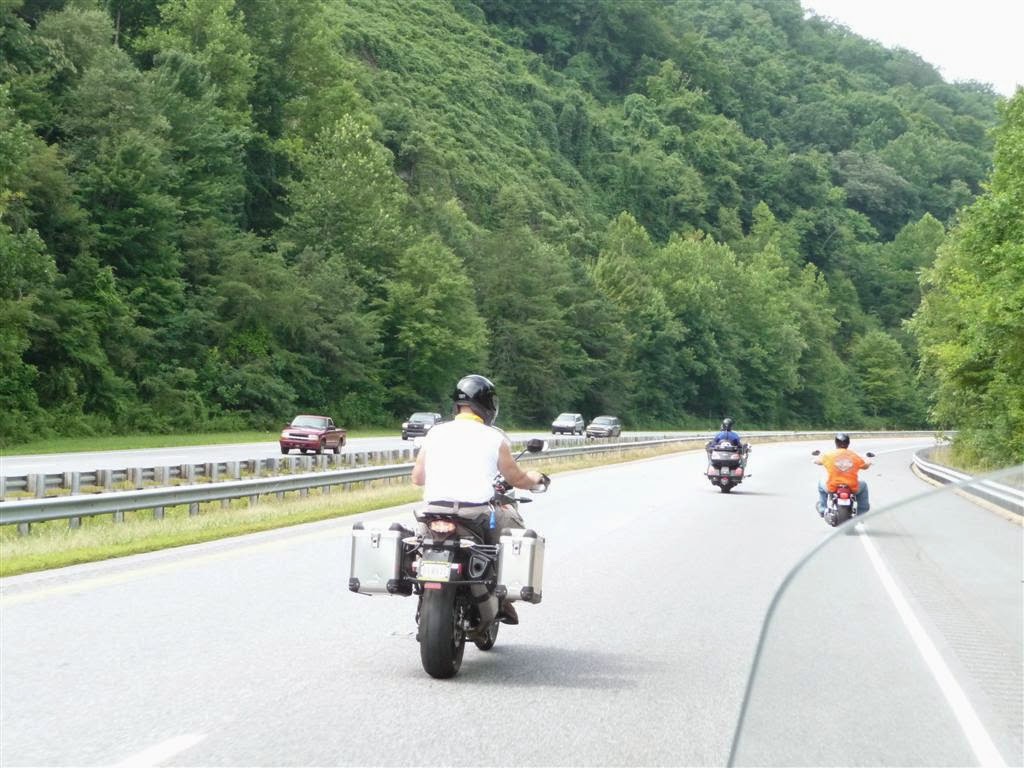 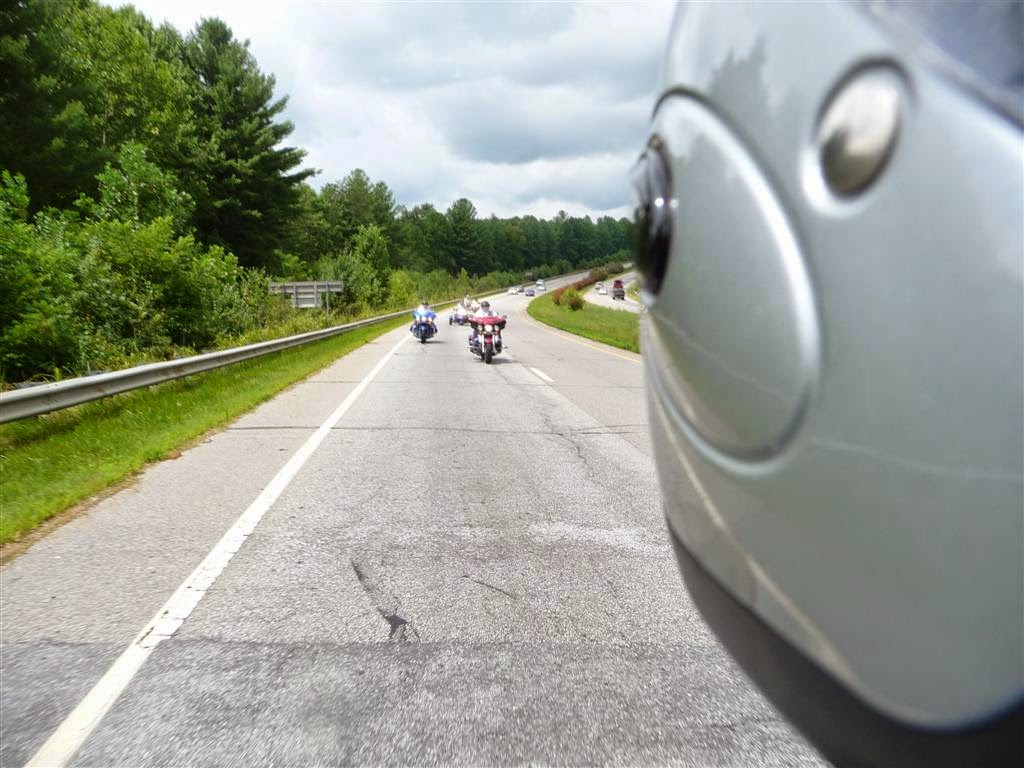 Looking back on US 74 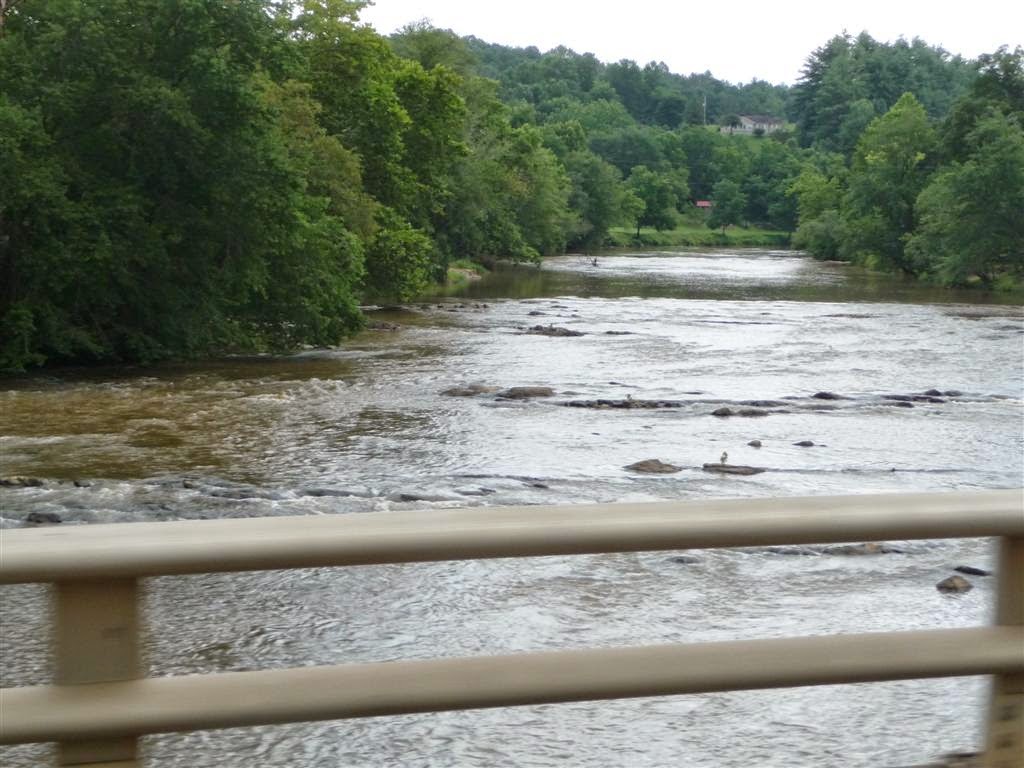 We came to the turnoff to Wayah Road and, just our luck, the pickup and boat turned ahead of us. With the road tightening, his speed decreasing and Flip riding his ass, the truck finally pulled over and let us go by. Wayah deserves its reputation. In addition to some loose stone, there were a lot of splintered branches lying in the road. To compound the experience, it had rained here recently and some corners under the overhanging trees were wet. Some sections were winding and some were just plain tight. Those parts reminded me of Wolf Pen Gap in Georgia, sans the double row of cats' eyes in the centre. I went easy due to the wet and only had the back tire slide once.

After forty or so miles of twisting and turning, we arrived at the main road into Franklin. I misdirected Flip at an interchange (yes, he has a CB too) but, after a U-turn in a church parking lot, we rode into town and stopped at a gas station to decide what to do next. While there, we met a group of lady riders from the Lansing Michigan area who were heading home tomorrow. It started to rain so we followed Blain to Mulligan's Sports Bar & Grille, where it immediately stopped raining. 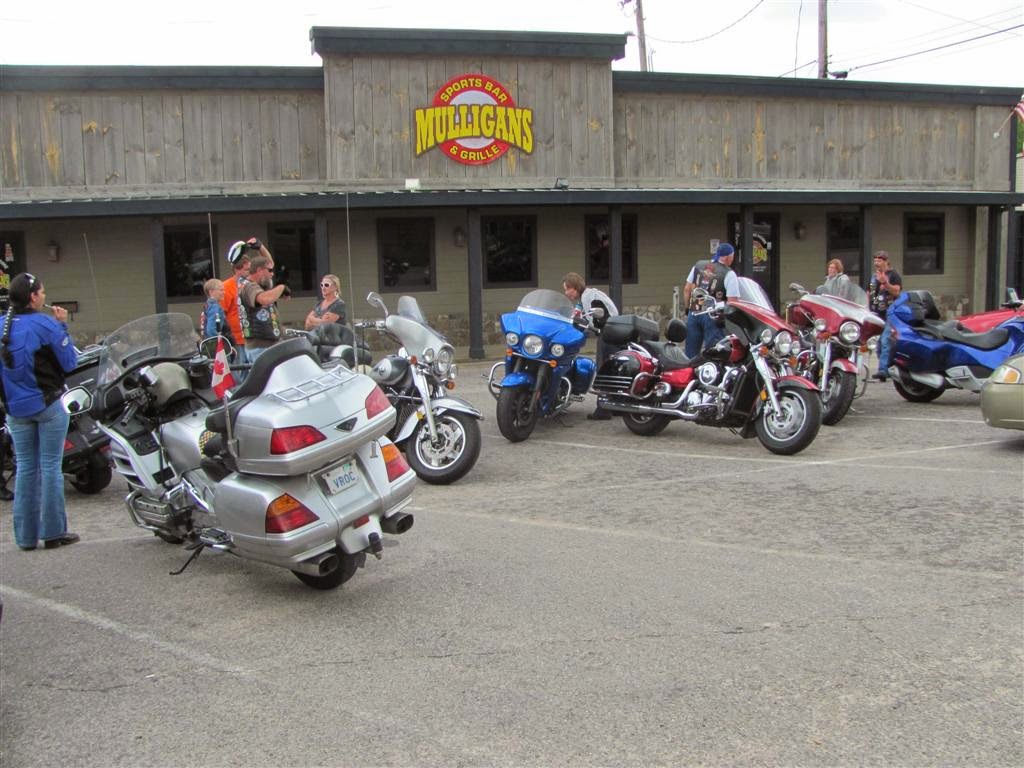 After a satisfying lunch, Flip, Blain and Rainman decided they would continue on US 64 and return to the lodge via NC 215 and the Blue Ridge Parkway. The Missouri crowd plus Southern Draw opted to take the more direct route back, following me north on NC 28 (aka Moonshiner 28).

I led at a moderate pace as we went through the curves and graduated to the tighter turns as we crossed some ridges on the north end. Liz was right behind me on her blue Vaquero.  I could see her in my right hand mirror and hear the lean popping as she backed off going into the corners. SD brought up the rear and said he likes following me because I am a steady leader. I took that as a great compliment. As Red Green might have said, if you can't be fast, be steady. 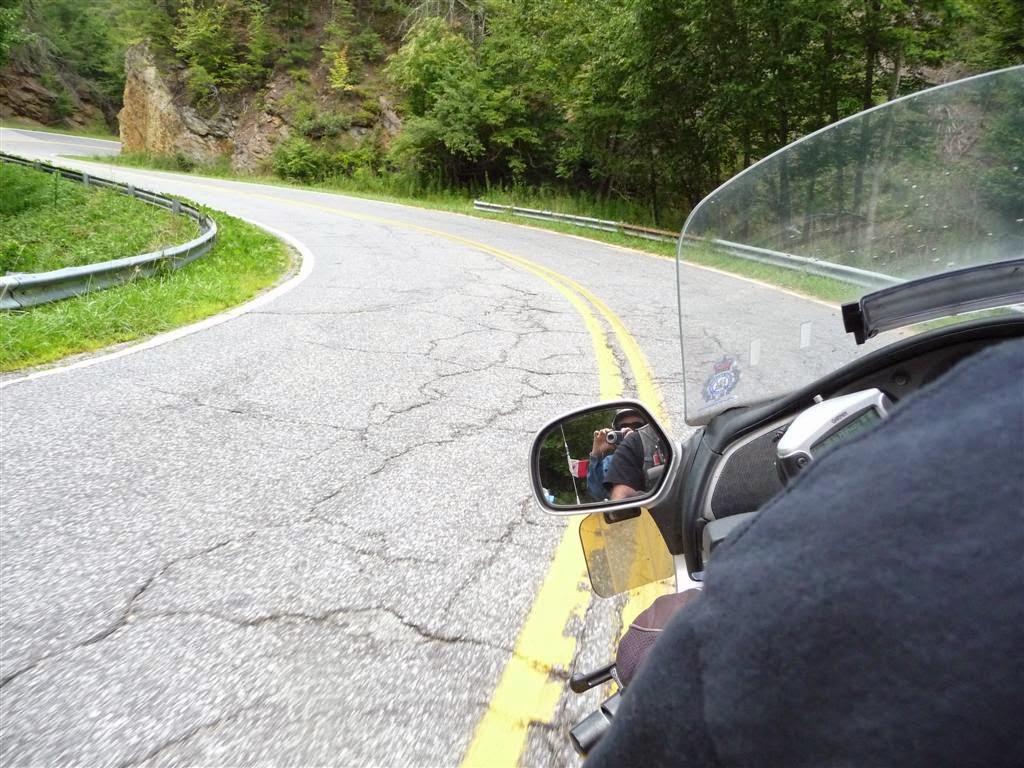 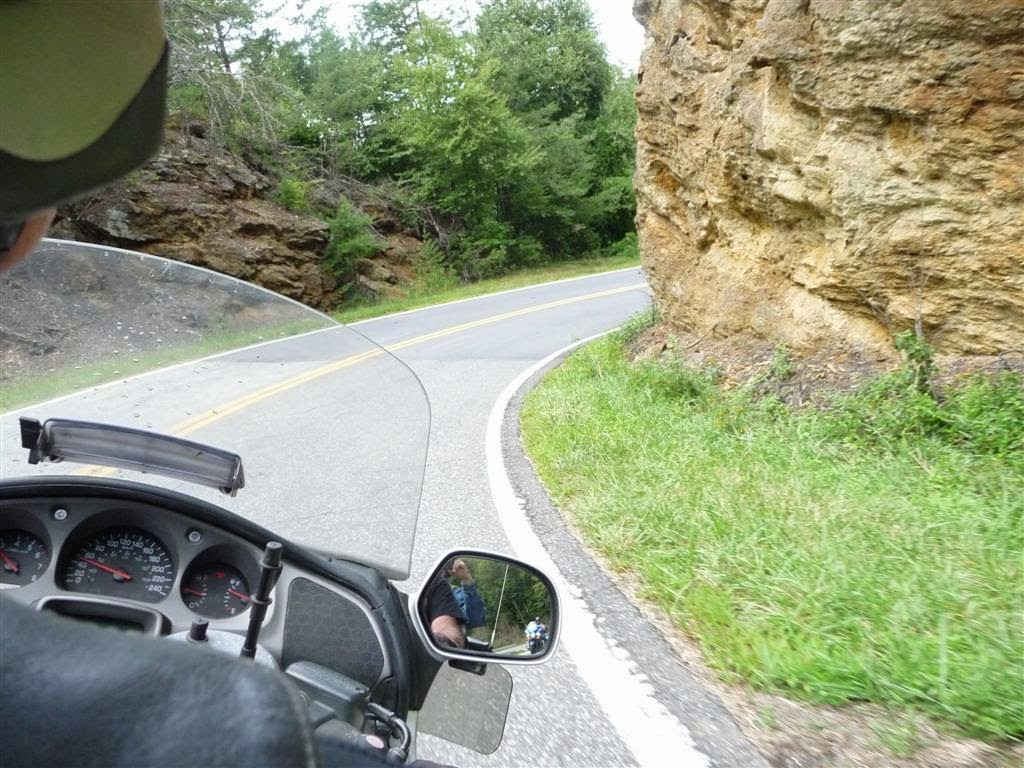 Not a lot of clearance in some places 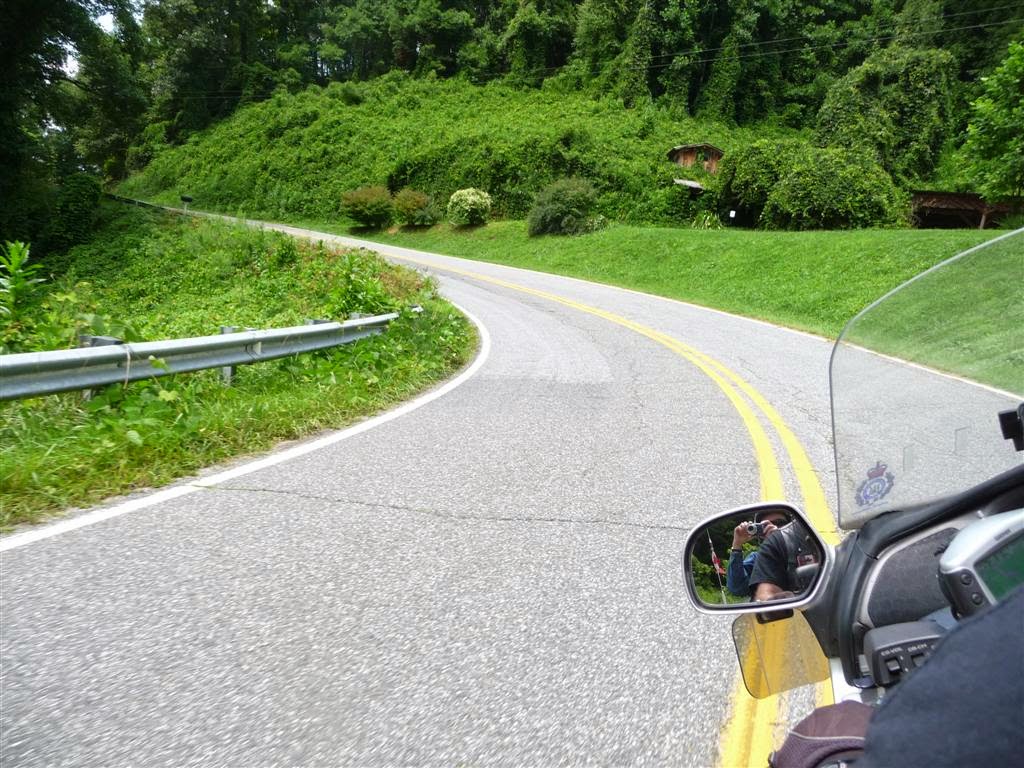 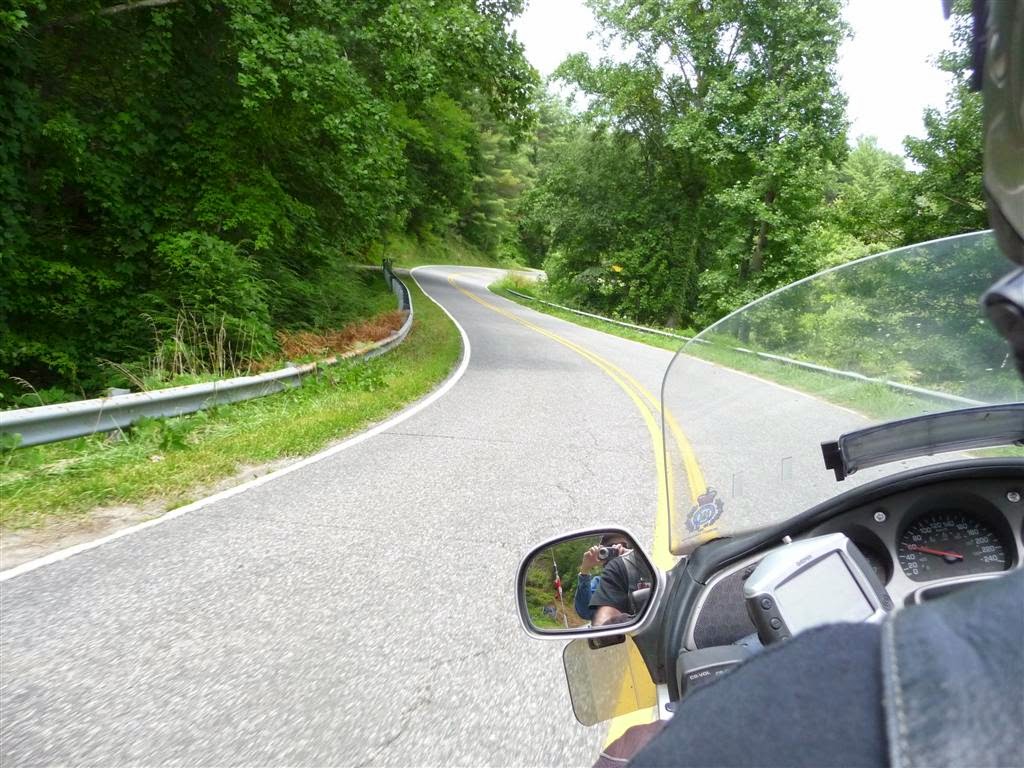 In NC, one curve leads to another

As we got into Two Rivers, Flip called to say that they were at Dry Falls on US 64 where Blain had a flat tire. Plugging wasn't an option because he had tube tires to go with his spoked wheels. Kathy was getting set to take their Suburban and trailer out to retrieve him, but Southern Draw and I said that we went out with him and we would bring him back.

We hooked my trailer to the Avalanche and the two of us set out on our rescue mission. The power cord for the GPS car mount wasn't working (maybe I shouldn't have left it mounted in the hot windshield for three days), so it was a  good thing Bill was along. We took US 74 the other way to US 441 south, a four lane road that led to Franklin with one huge hill and many fewer turns than 28. As we got to the bottom of the grade on the other side, we saw a huge load about to head up northbound. That was going to be a trick. On the way, Bill and I got a little quality time to talk about this, that and the other.

In Franklin, we headed east on US 64 towards Highlands, a very twisty road for a trailer. About 40 miles after leaving Two Rivers, we came to the Dry Falls parking lot and the guys (and gal since Renata was riding behind Flip). The tire had gone down while they were down looking at the falls, a lucky thing considering some of the drops off the tight corners on 64. A sudden loss of pressure on that road would not have been nice.

The lot was full so I just pulled up in the middle and dropped the ramp. After adjusting the Condor chock depth for the Harley's bigger diameter but narrower front wheel, and relocating the tie-down loops, Blain rode the bike in and we tied it down. Although a few other drivers looked to be on the edge of snarky, we were in and out in just over five minutes. 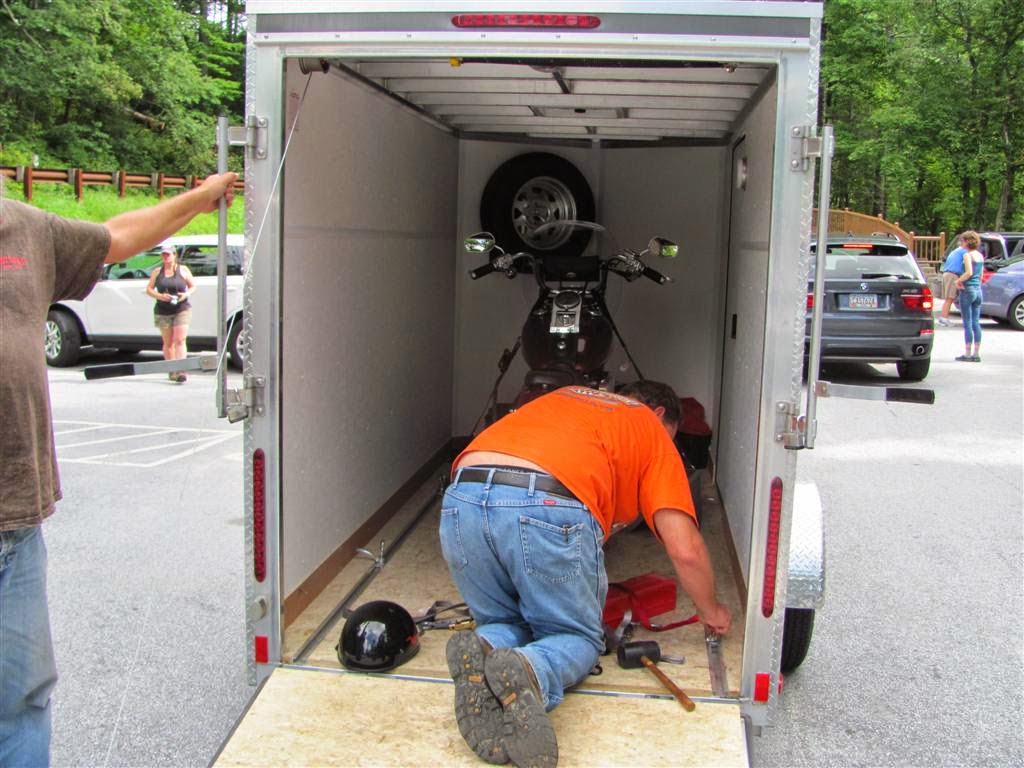 Blain ties down the back of his baby

To get back to Bryson City, we just retraced our path. I got to know Blain a lot better as we drove along. He is a genuinely likable fellow and it was my pleasure to help him out after all that he has done for others. As we got to the bottom over the grade on 441, we saw the large load just getting there. For some reason, it was exiting the four-lane and going onto a narrower two-lane road. I'm glad we weren't down there.

When we got to the lodge, I pulled the trailer around back of the motel and we unloaded the bike in front of Blain's shop. Then we  found most of the folks were going to the Bar-B-Que Wagon in Bryson. This was the place we had seen Badger and Susan a couple of days earlier, but we had never eaten there. Because the trailer was still connected and the evening was pleasant, we took the bike.

Saturday night at the BBQ Wagon was busy. Very busy. there was no room to sit inside so we commandeered some outside tables and then we went in to order. There was a special BBQ sandwich (pulled pork), fries and a drink combo, so I ordered two for Sandy and I. They were quite tasty. 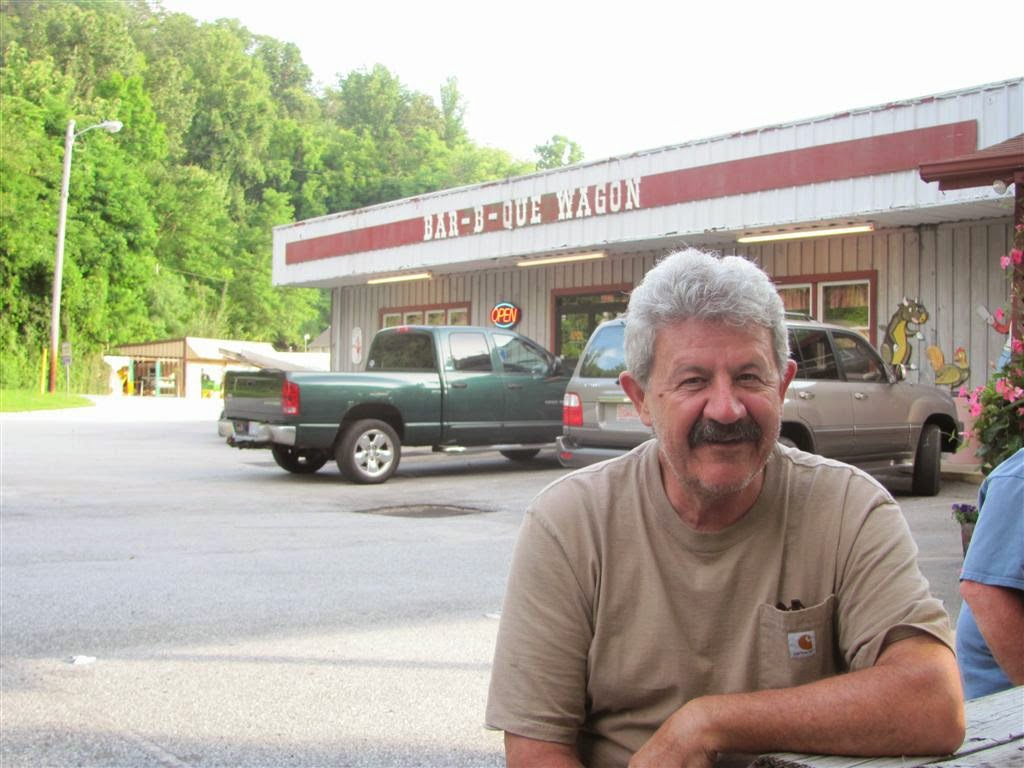 Solo from Colorado at the BBQ Wagon

On the way back to the lodge, I noticed that the bike had turned over 250,000 kilometers on the clock. Not bad considering it was still running just fine. 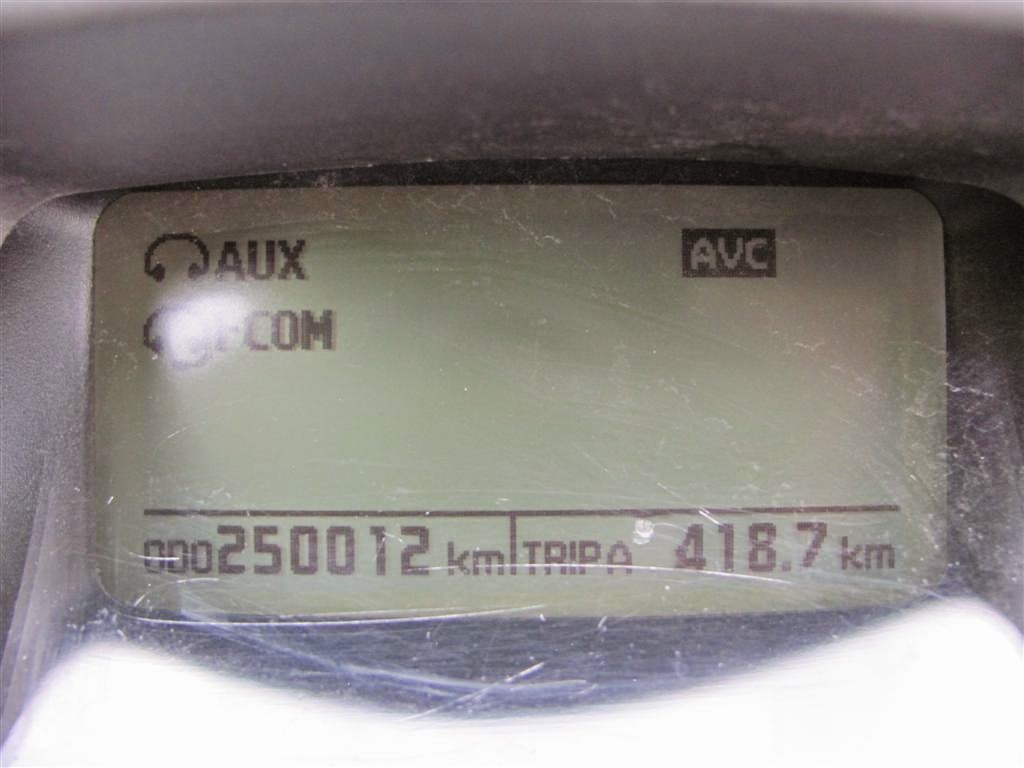 The entertainment tonight was bluegrass. The group wasn't a formal band with niceties like a name, but they gathered to play local venues when they felt the urge. It added a nice mountain touch to the evening. I don't watch the TV show Moonshiners so I probably wasn't sufficiently awed to find one of the stars, a fellow named Mark Rogers, kicked back in one of the chairs listening to the tunes.

As the boys played, I worked on fixing the GPS power problem. Thinking it might be a blown fuse, I took the plug apart and checked it. It seems that all it needed was to be taken apart and put back together. We were good to go. 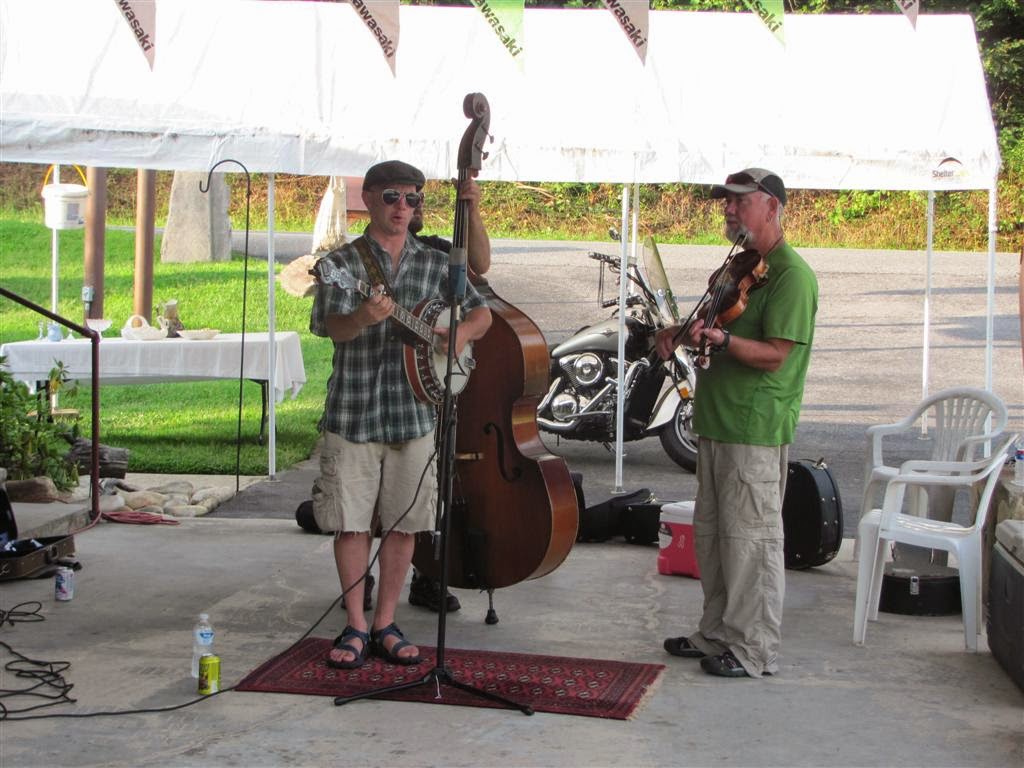 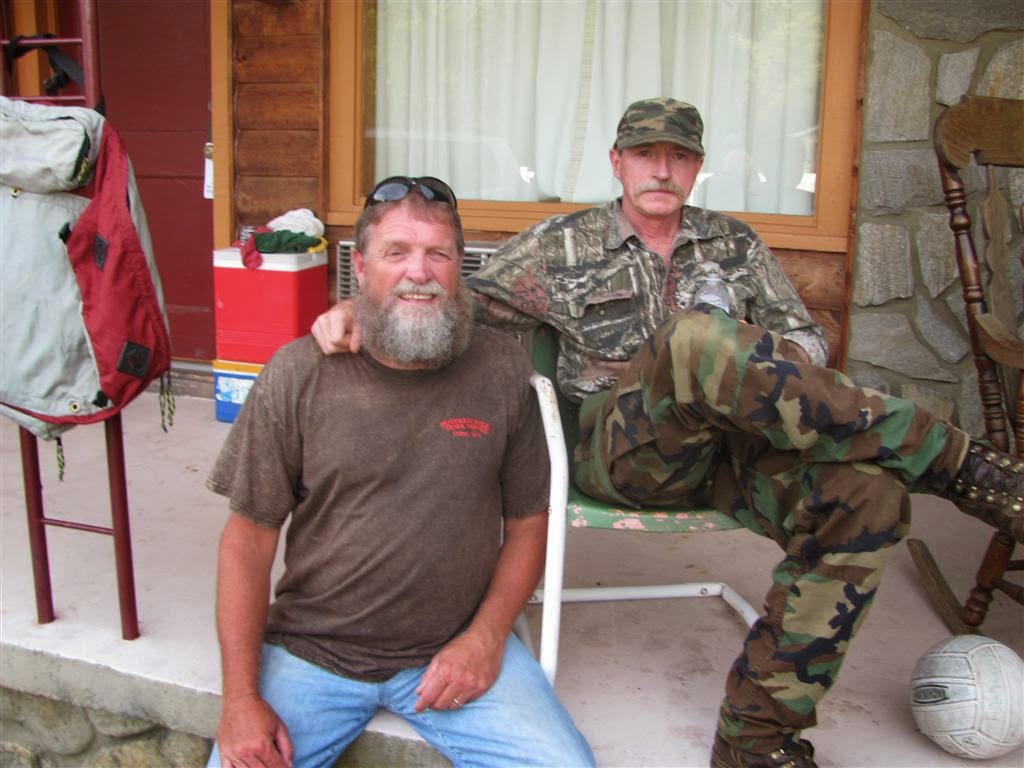 My boy Bill with Mark Rogers of Moonshiners

As the sun went down, Sandy and I packed our suitcases and loaded them in the truck. Then I pulled the trailer out onto the asphalt and loaded the bike. When all was suitably tied down, I put the truck back on the grass and went back to mingle.

The last night of a rally is bittersweet as the glow of camaraderie is offset by the sadness of everyone leaving the next day. The bonus this time was that a lot of us would be gathering again in Arkansas in another five weeks. Still, things were subdued as the rain started to fall again. 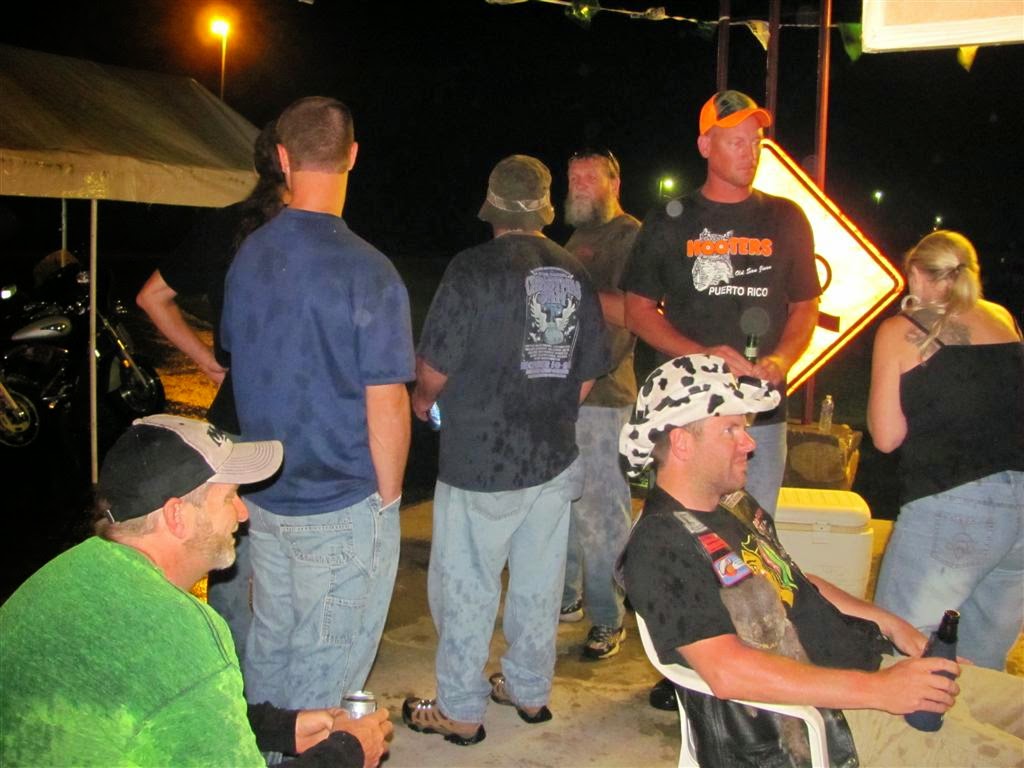 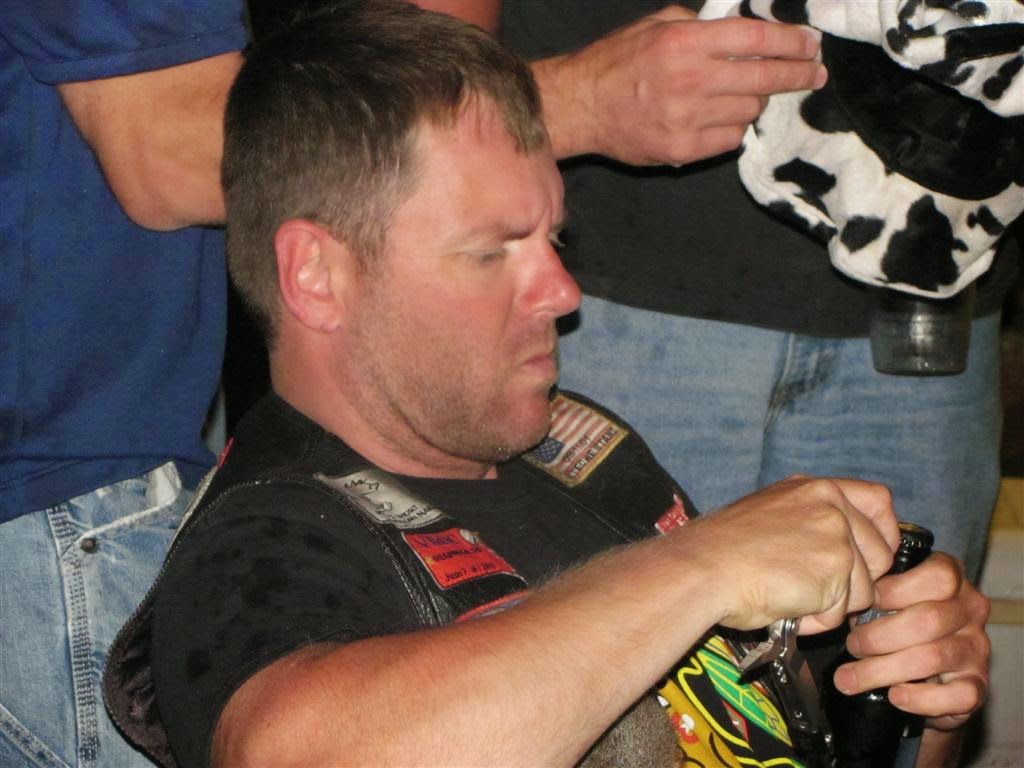 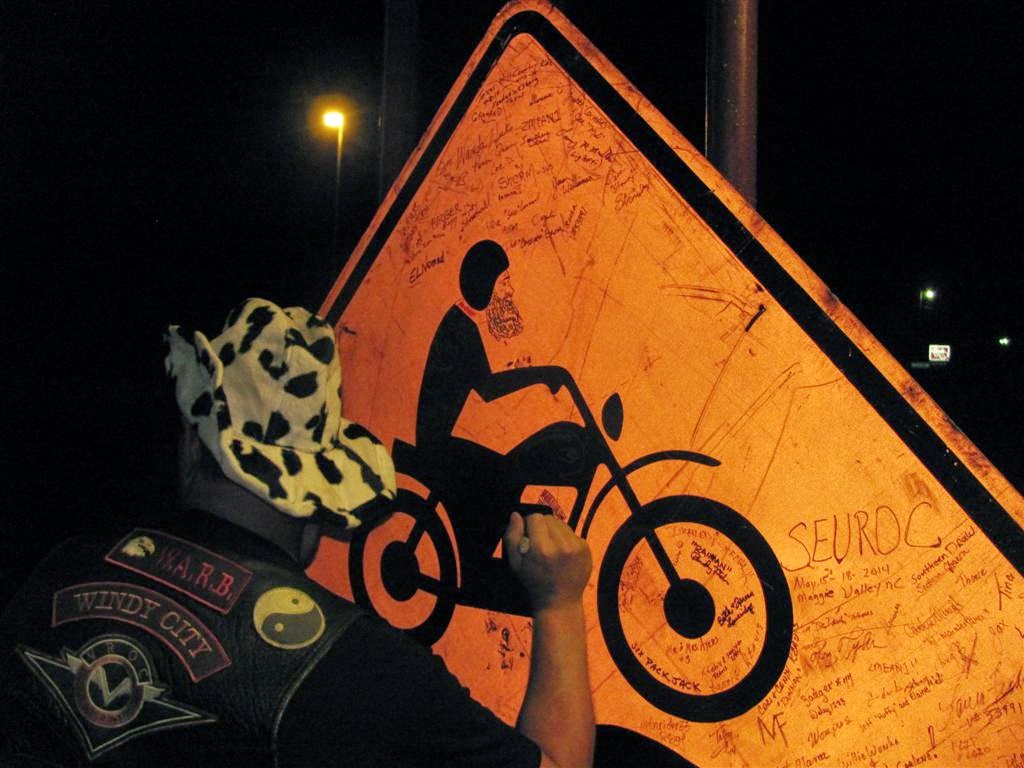 As the evening wound down, we reflected on the great job that Southern Draw and Southern Charm did in putting this Wandering Rally together. It is a big challenge to organize the event that commemorates Wolfman, but they did him proud. Also, more probs to Blain and Kathy and Two Rivers Lodge for once again hosting us in first class style.

With a long day ahead of us tomorrow, Sandy and I retired to our room at 10:30 and to bed soon after. 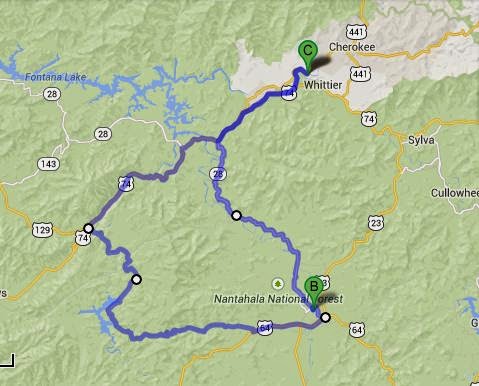 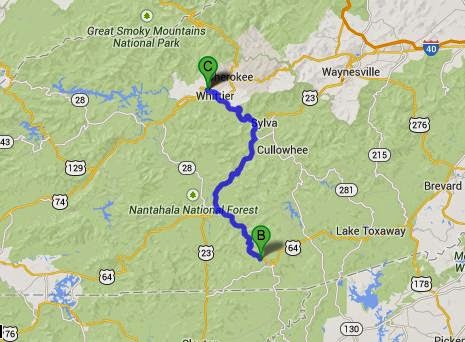