Today's planned ride was the Dragon/Cherohala loop that we shelved yesterday. We had a discussion last night about the appropriate departure time. I suggested my usual 9:00 AM because I like to get back before 4:00 due to the late afternoon pop-up showers. I got outvoted. Sandy and I had breakfast in the room when we got up, but the others left for breakfast at the Everett Street Diner at 9:00. Blain and I left the Lodge at 9:30 to meet them. Everyone was just finishing when we got there. Sandy opted to skip the ride today. 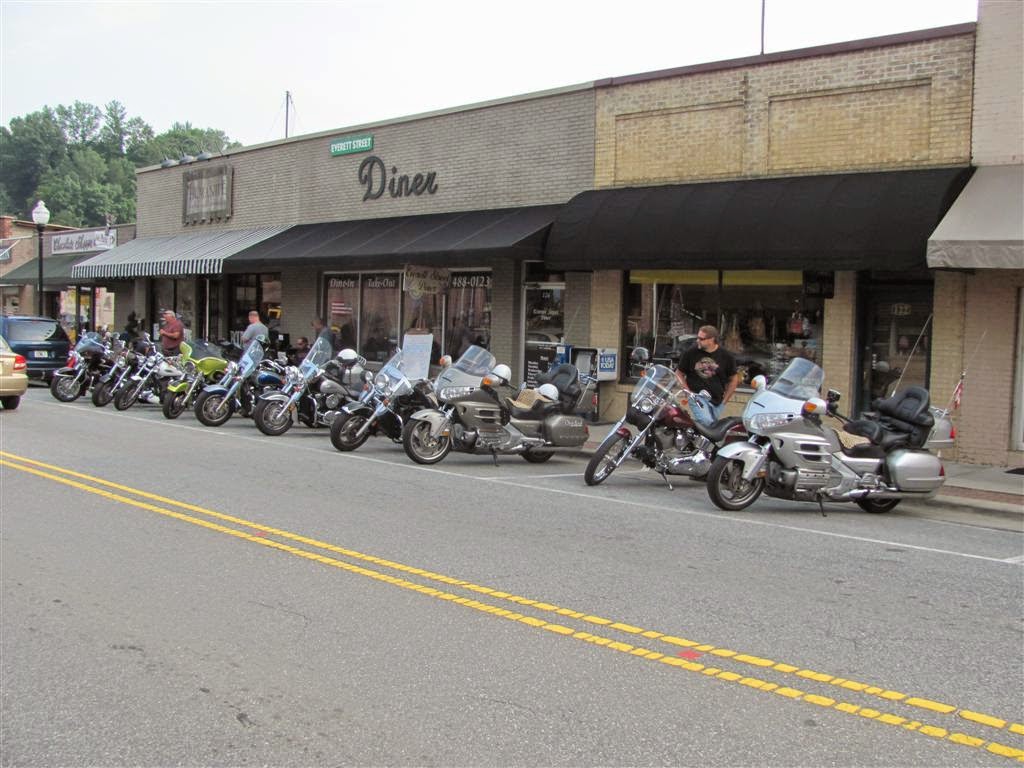 I led the first part of the run out US 74 and up NC 28 to the Fontana Dam. We passed two cars coming out of the Stecoah Valley and then just had one car ahead of us, but he was doing a reasonable pace. I was in the groove and enjoying myself. We cut down the access road to the dam and parked. The volunteers this weeks were the Burgesses from northern Alabama. 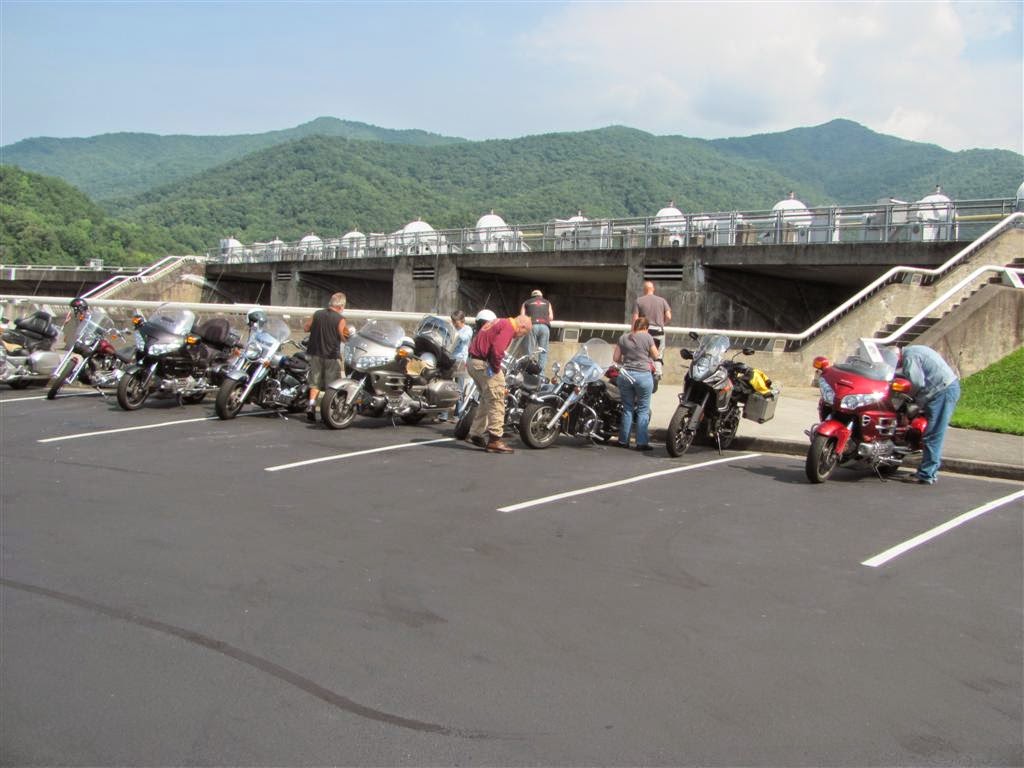 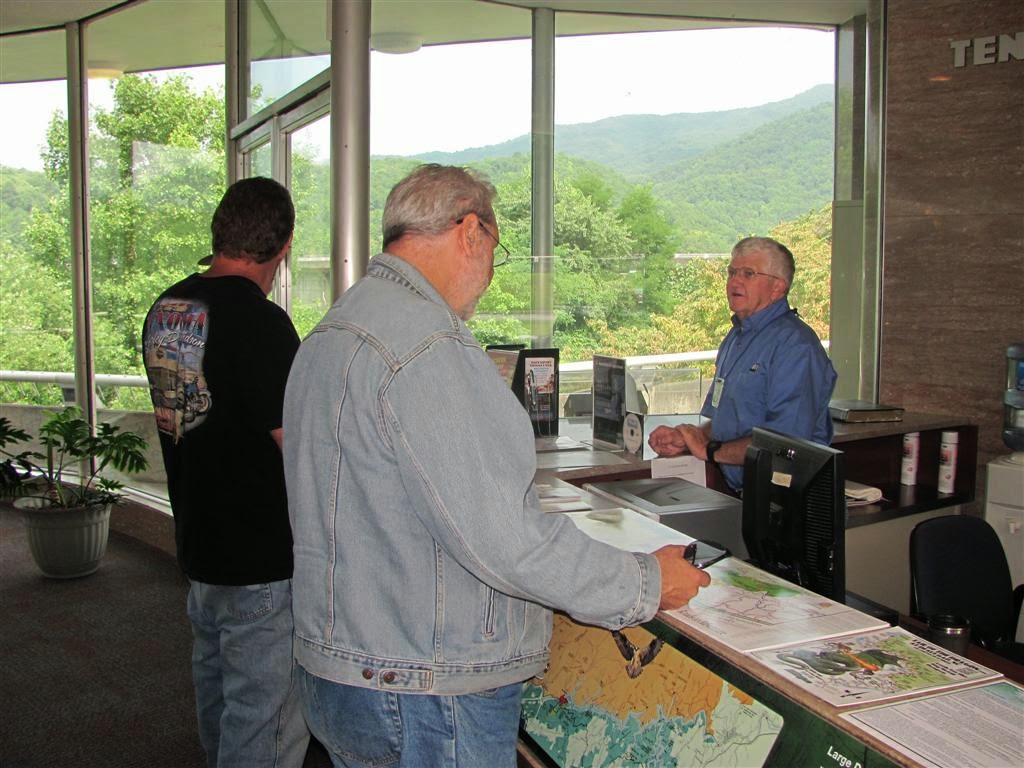 Coming out of the dam, Flip took the lead, followed by Blain, Wrong Turn and me. The character of the road changes here, going from fairly open sweepers to tighter turns. Flip rolled out hard and I was keeping up until I looked in my mirror and saw the absence of any other headlights. I keyed the CB and told Flipper that I was going to slow down and wait. Soon, the rest of the group caught up and I led them up to Deals Gap Resort where the lead pack was waiting. The traffic was very light all the way up.

Since this was the first time Mal and Yvette had been here, they went in to buy the obligatory T-shirts and stickers. In all the years I have been coming here, I have never bought a T-shirt or a sticker but I am in the minority. We did see a VTX that had been rear-ended by an Indian after the decision to abort pulling out into traffic wasn't mutual. CheapB also loaned an Allen wrench to a sport bike rider who had locked his key under his seat. 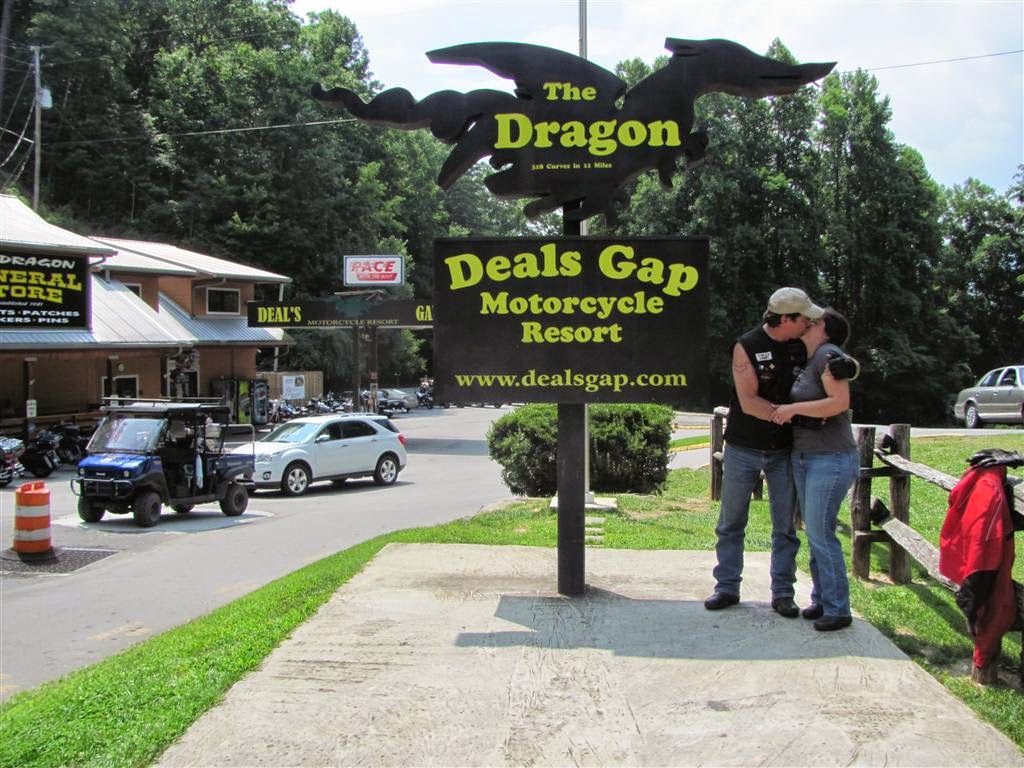 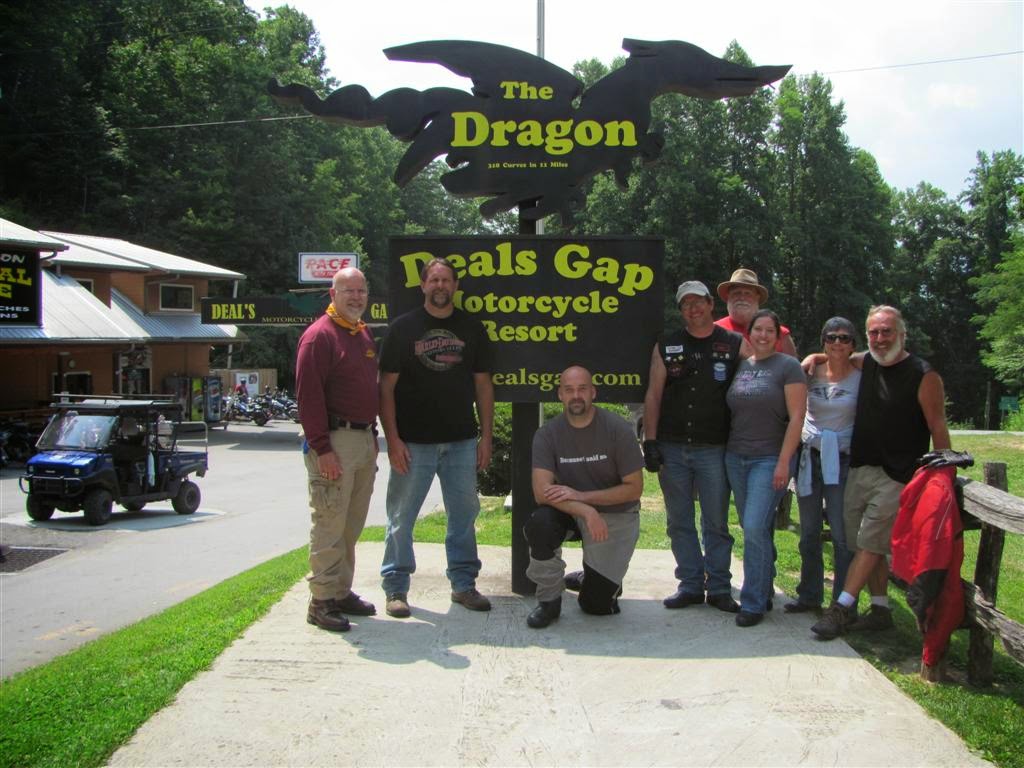 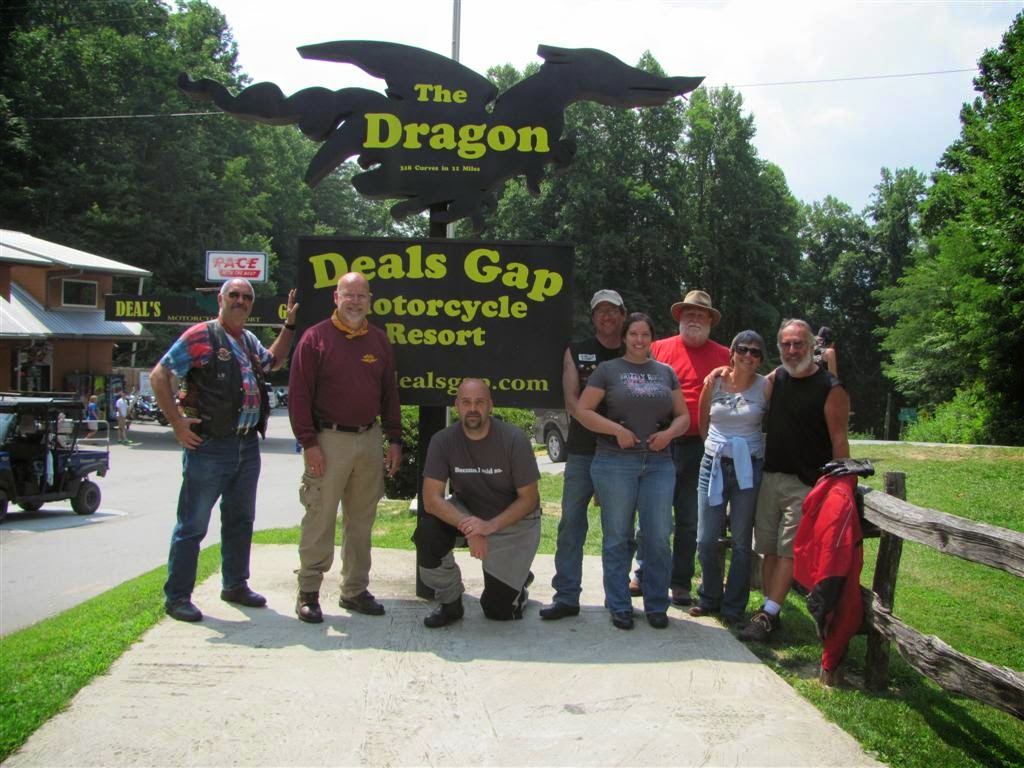 Redux with yours truly in the shot 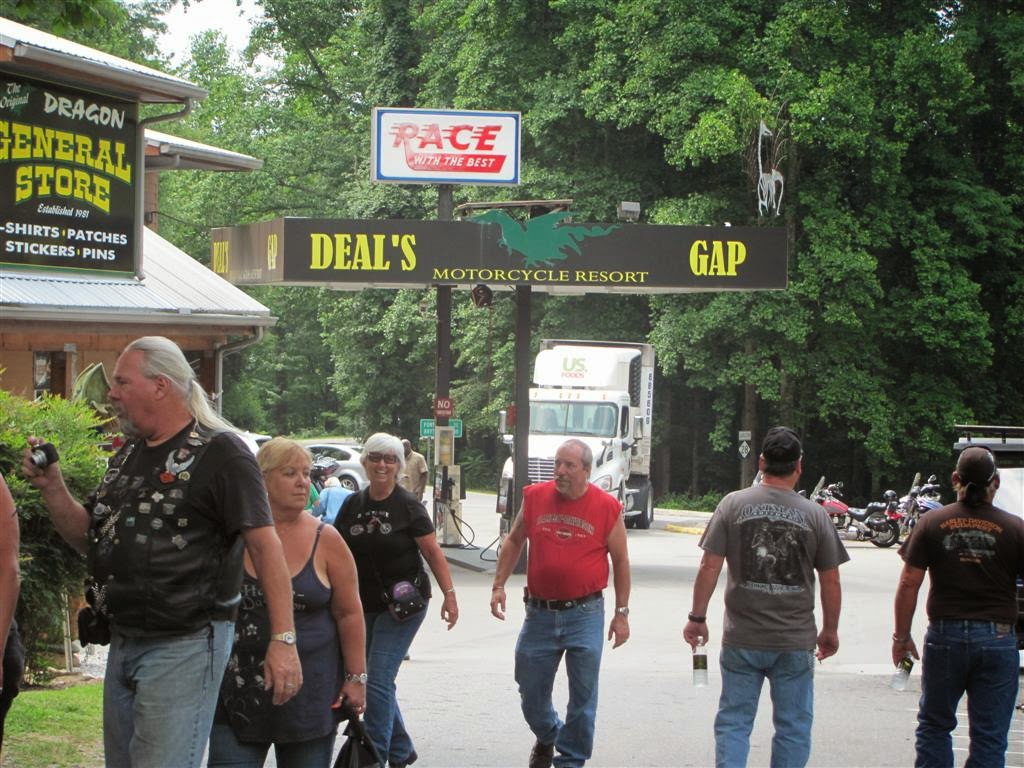 Really not to busy 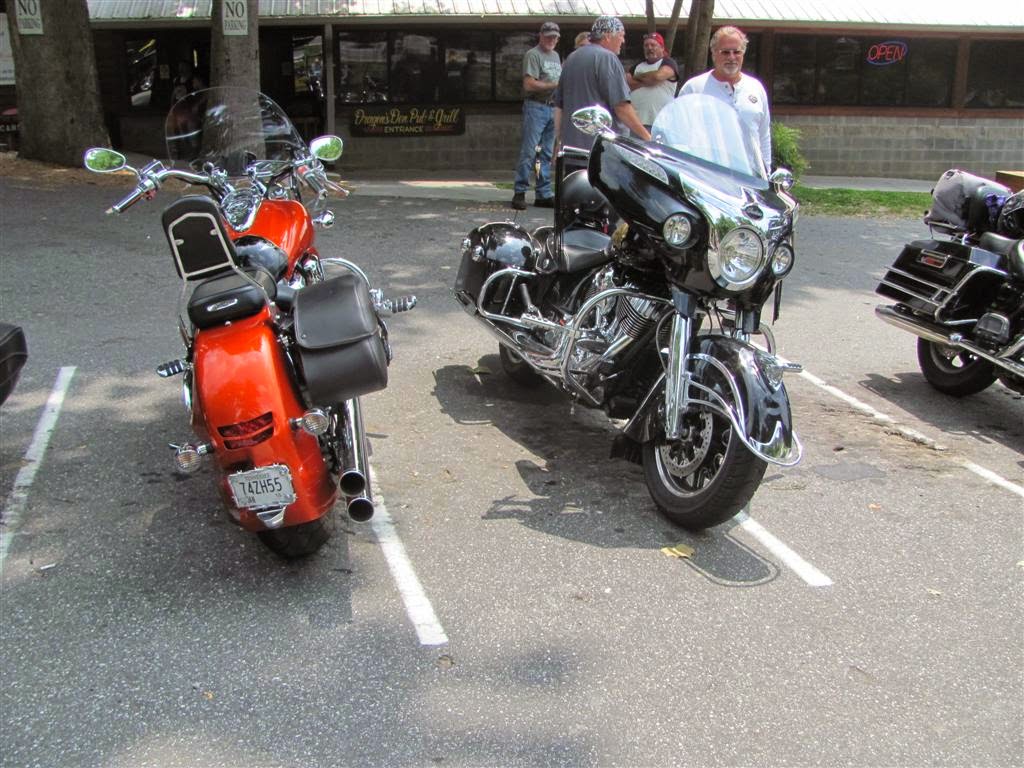 They tangled before ever getting on The Dragon 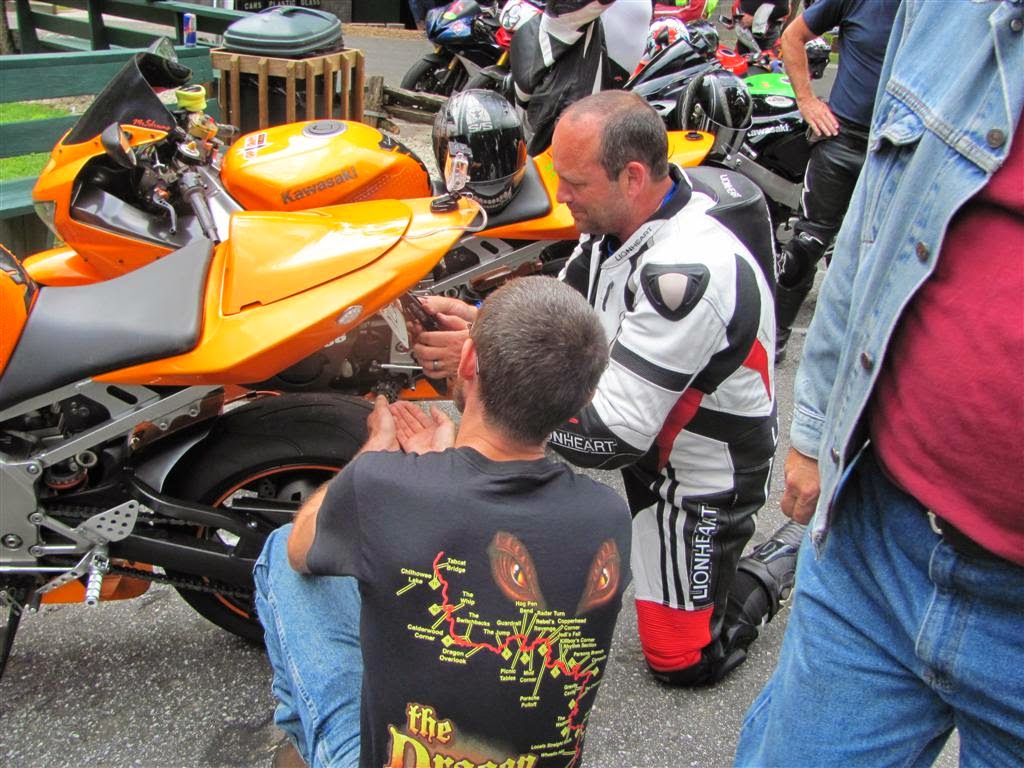 Need a key to get a key

Wrong Turn opted to follow me through The Tail Of The Dragon. We set a moderate pace, following Rainman on his KTM. When we caught a car, Rainman passed while I opted to pull over and let them get ahead. We sat on the side for a couple of minutes, and no one came by before we took to the road again. We did meet five Corvette's going the other way. Just as we were catching the car again, I saw fast movers coming up behind and pulled to the right to let them pass. It was a red GoldWing being pursued by Blain. They went by us and the car. Soon after, the car pulled aside and let us go.

We knew we were getting close to the overlook when we met the red Wing coming back the other way. I came around a right hand curve and he was in my lane, passing a truck. I think we could have gotten past each other with perhaps only a little mirror damage, but he squeaked in just before we got to him.

When we got to the overlook, Blain was waiting and pulled out ahead of us. He can really ride. I was keeping him in sight until we caught a car. He got by in a short chute while I decided not to pass in a corner. As a result, I got the the pullout at the end shortly after he did. The rest rolled in before long. 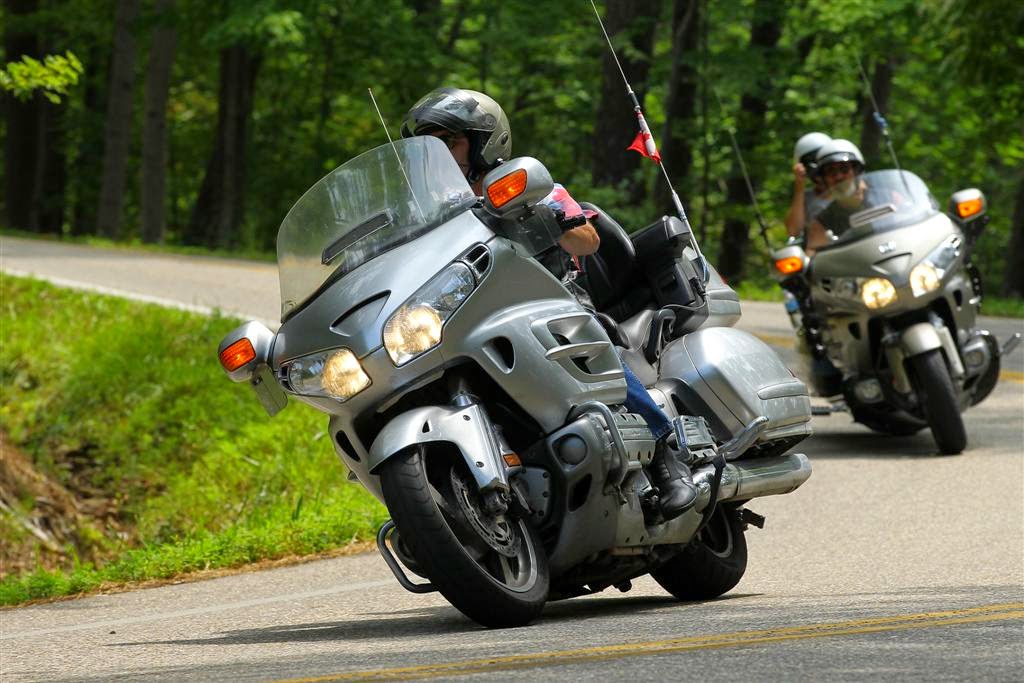 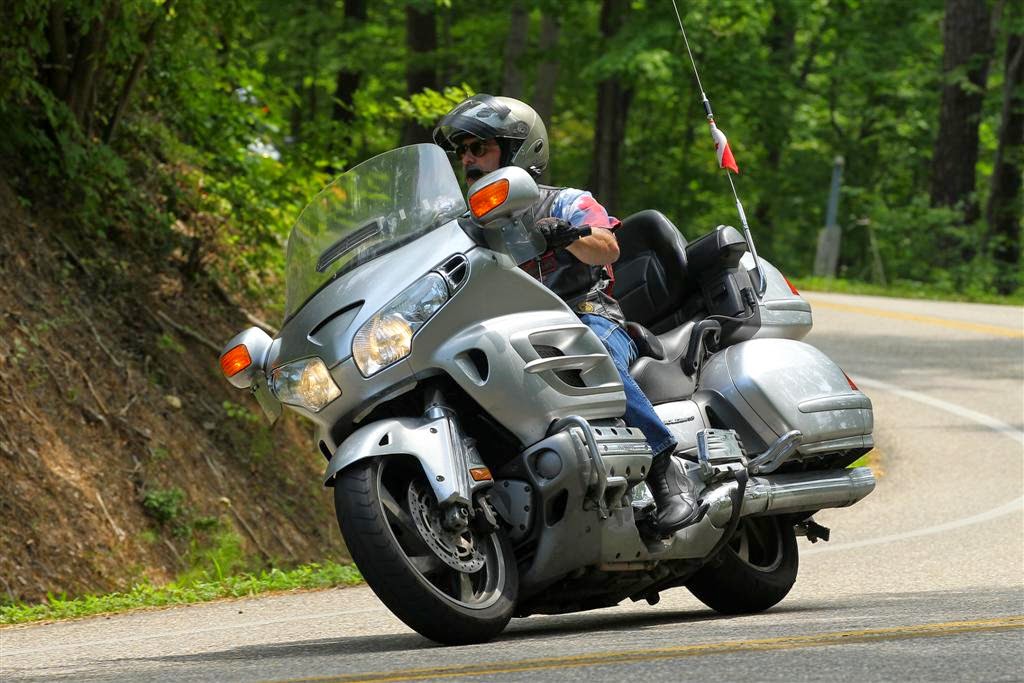 It was a good run 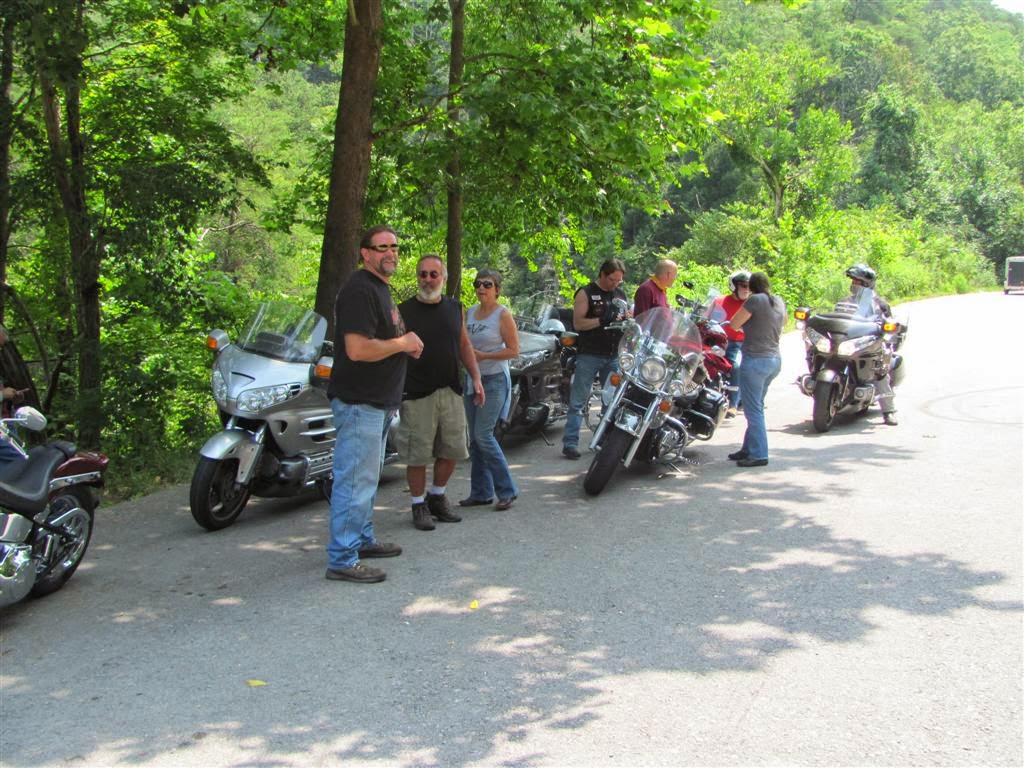 The tip of The Tail Of The Dragon

Continuing on up US 129, I led again. We turned on TN 72, which took us up to US 411 in Vonore. I stopped at the BP station where we paid $3.21 for gas. I like Tennessee gas prices. We had to wait for Lucky All before we could get moving again. I have no idea what he was doing. 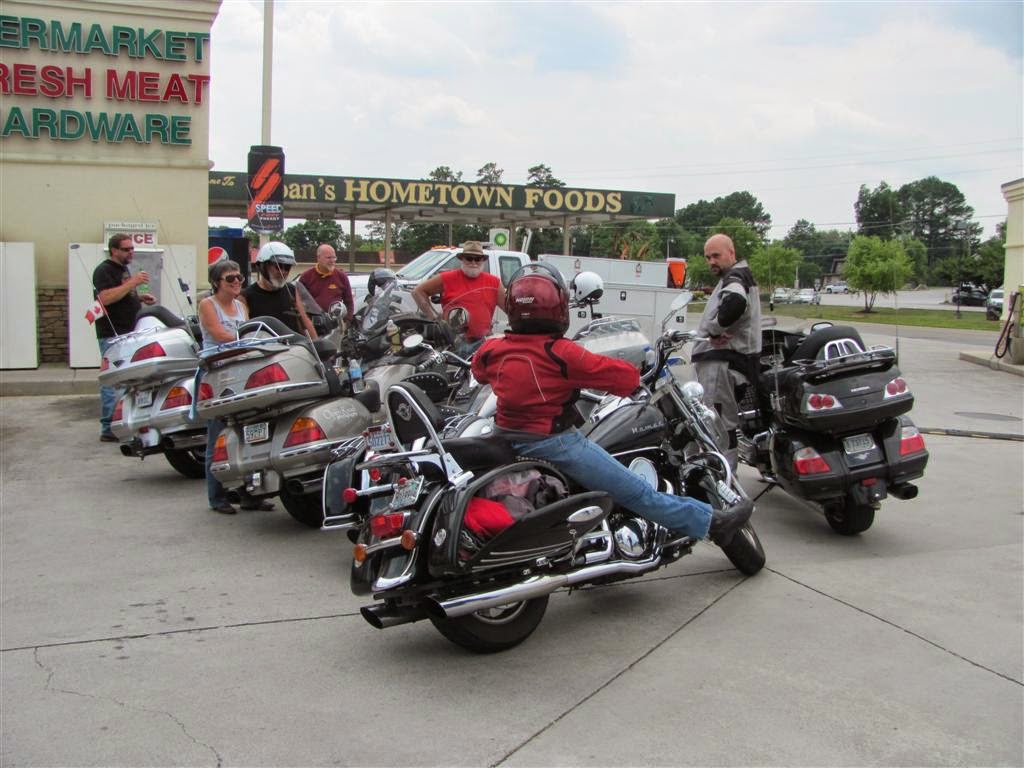 Blain led us down TN 360 to Tellico Plains. This road has lots of curves but very little in the way of elevation changes. I rode second and was still having a blast. As we entered Tellico, we passed a  VROC group going towards the Cherohala. We knew they were ours because of the yellow GoldWing with the rider wearing shorts. Only SixPack Jack fits that description.

Blain took us to the Krambonz BBQ in Tellico. This is a little place with pulled pork, ribs and brisket. They do it well. I had a pulled pork sandwich and potato salad. 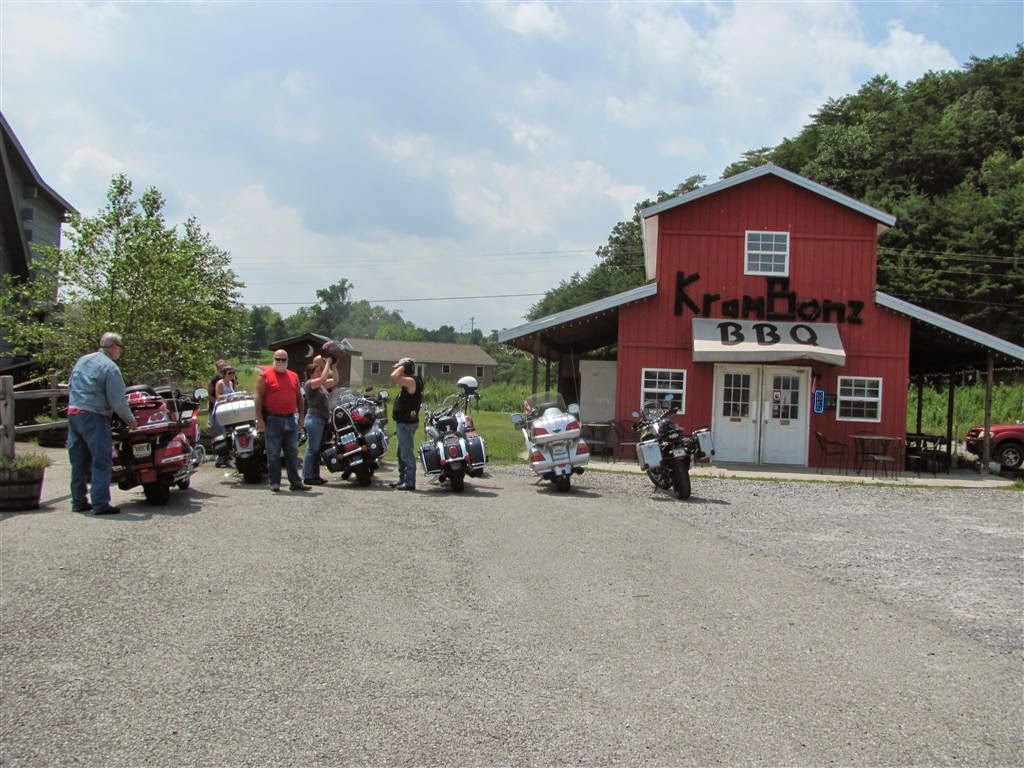 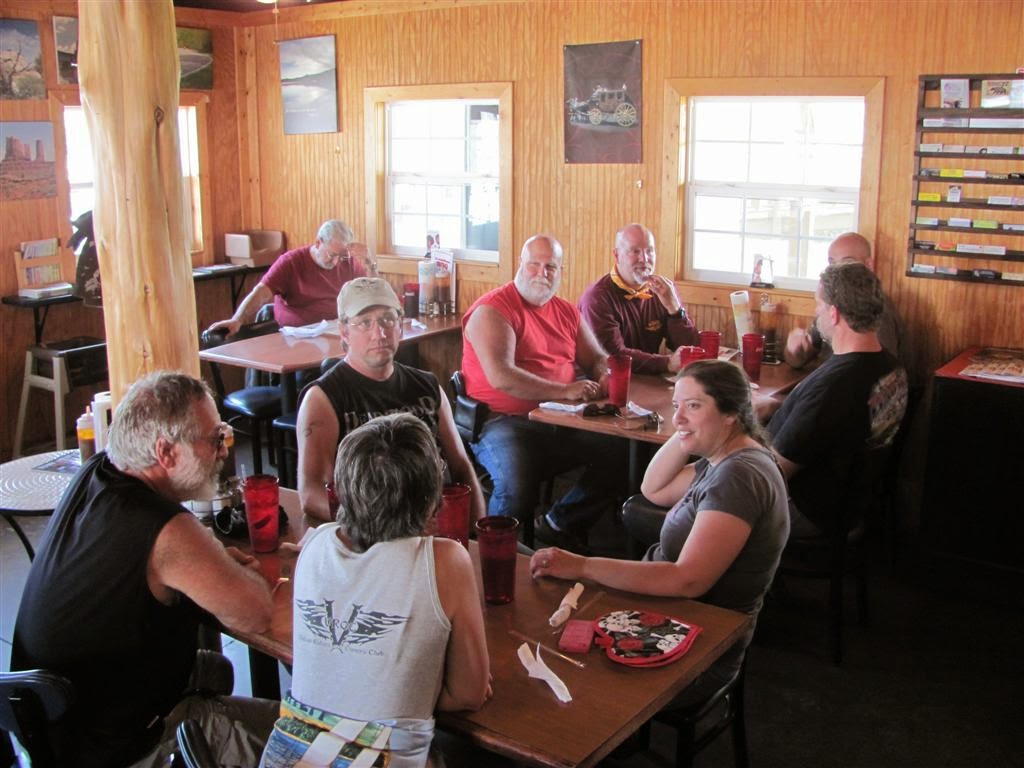 We took up most of the table space

After lunch, Blain led us onto the Cherohala. The first part climbs up onto the ridge and consists of many sweepers. We stopped at an overlook where we met a couple from South Carolina. He was on a Mean Streak and she was riding a Honda Shadow. We invited them to stop by the Lodge. 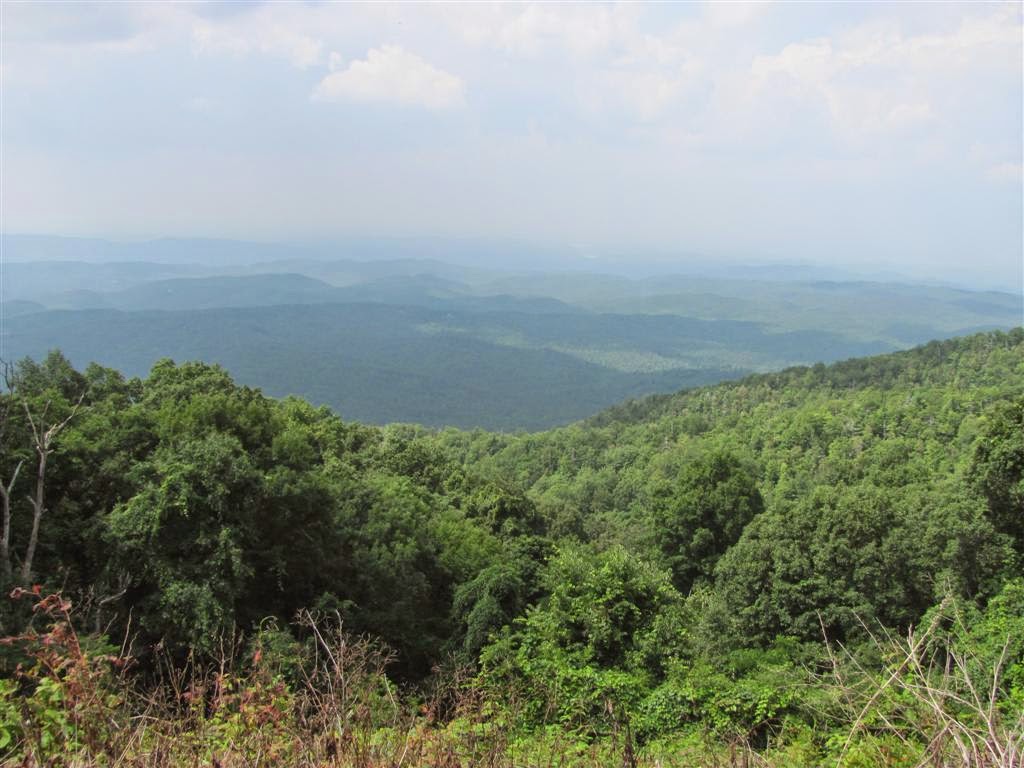 Overlook on the Cherohala Skyway

Once we got up onto the ridge, the Skyway changed. It went from constant sweepers to straight stretches joined by 25 MPG curves, many of which were decreasing radius. This was the point at which I fell right out of the groove. I really don't enjoy this road because I can't get a rhythm going.

There was a black cloud threatening us but the road went around it. Unfortunately, when we got to the end of the Skyway and stopped at the Skyway Food Mart and gas station ($3.38 per gallon), a second cloud caught us and it started to sprinkle. As we rode into Robbinsville and turned on NC 143, it started to rain. It was 4:45. Remember what I said about trying to get back by 4:00 PM because of the possible weather? This is a fact of Smoky Mountains riding. 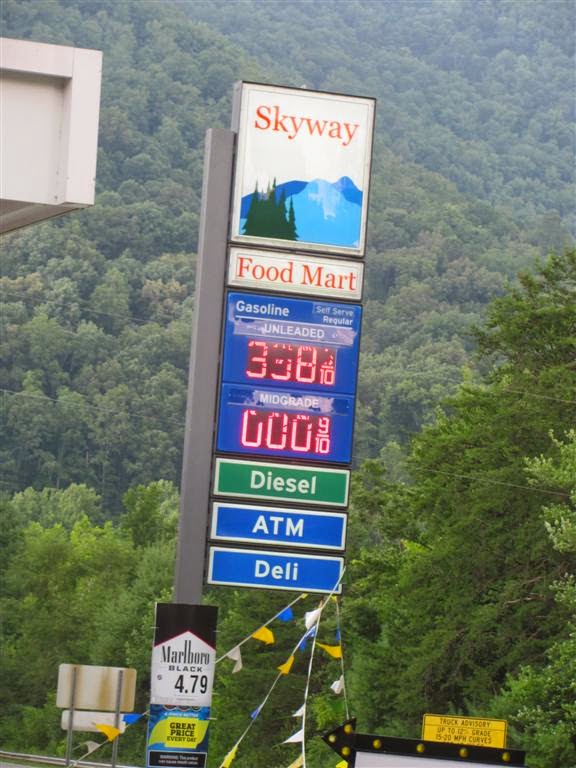 Once we got to Highway 28 and exited the Stecoah Valley, the rain stopped and we got back to Two Rivers without  further incident. We pulled in at 5:30 to find still more folks had arrived. 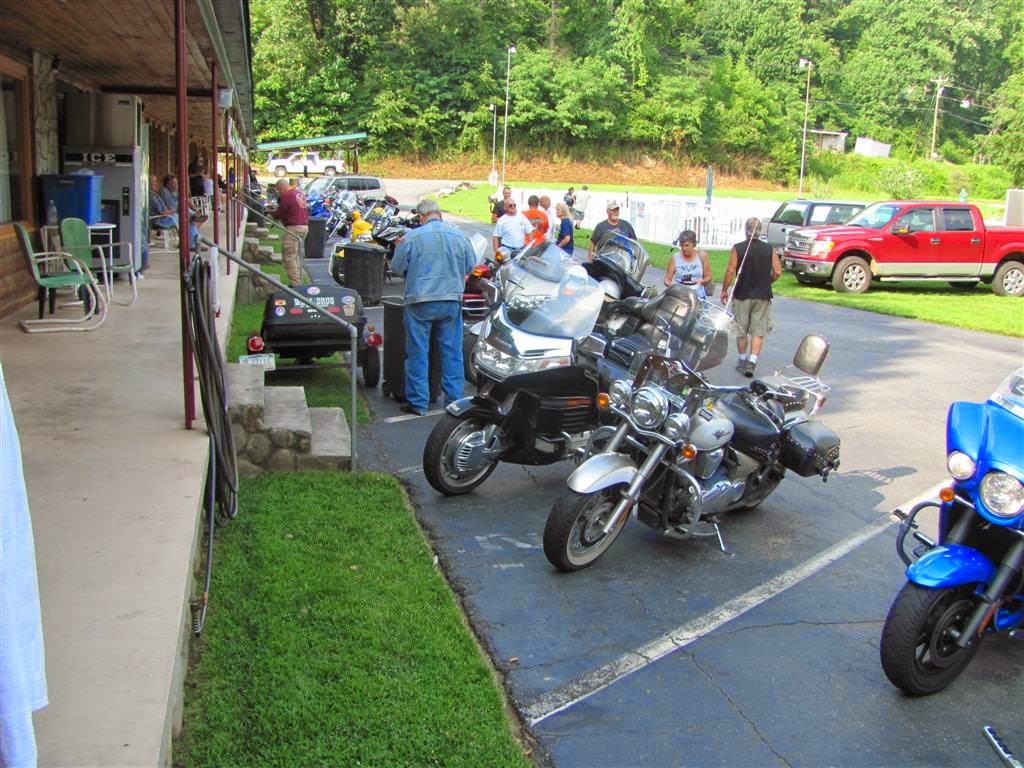 The lot is getting fuller

After visiting for a bit, seventeen of us decided to head to Granny's Kitchen for a buffet supper. Today, it was open and they were able to get all of us seated fairly quickly. I focused on the roast beef. The lady who brought our drinks was pleasant and funny.

After supper, we returned to the Lodge where we sat out and visited. I went to bed about 11:00 PM and there were still quite a few up. 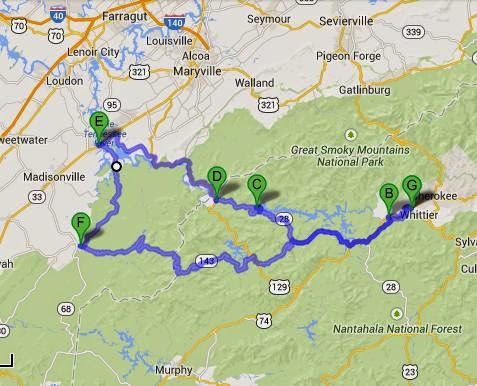