It was a slow morning. We didn't have as far to go as yesterday, so I finished my blog entry and posted it. I got a note from Lucky Al, on his way down from New Jersey, and we agreed to try to meet in Wytheville tonight. I made a reservation at the Super 8 at Exit 41 and then we went down for breakfast. The lot had filled up late, so it was good that I parked with an eye towards being able to get out. Gary V. will recognize the spot. We were on the road at 9:00 AM. 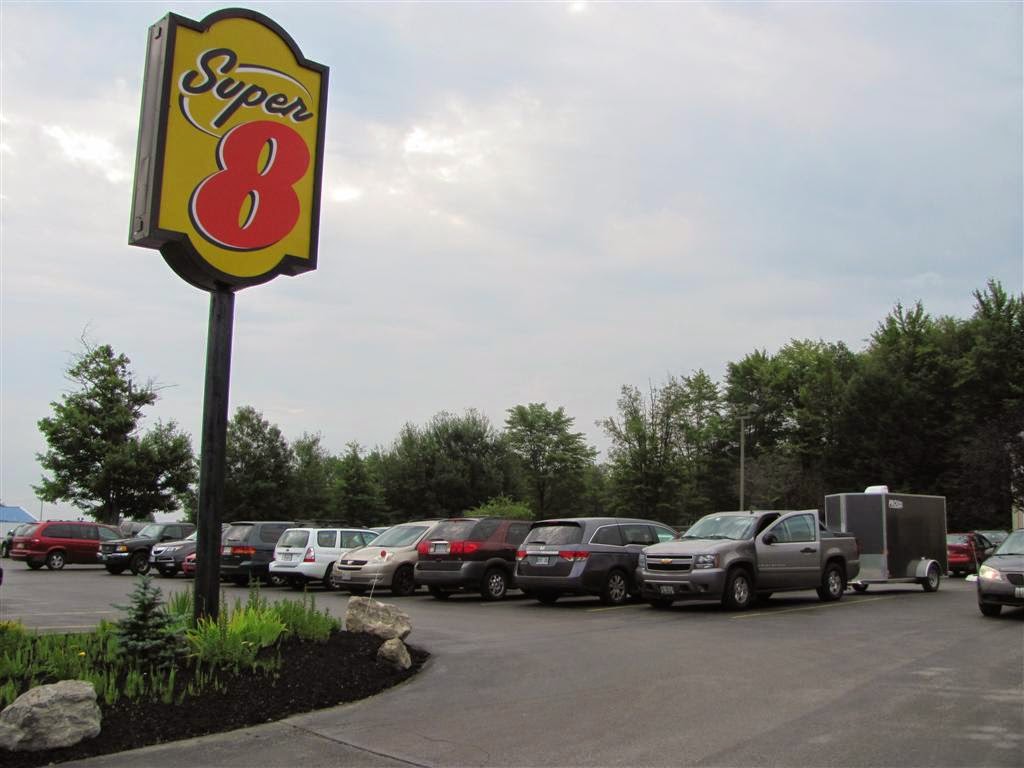 The drive was uneventful until we got to I-76, aka the Pennsylvania Turnpike. Southbound traffic was stopped as they tried to merge three lanes into one along with two more lanes coming off the Turnpike. The left lane, the one that didn't have to merge, was dead stopped while the others continued moving. I switched to one lane from the left and got through more quickly. It seems this was all to allow then to repave about 100 yards of asphalt. 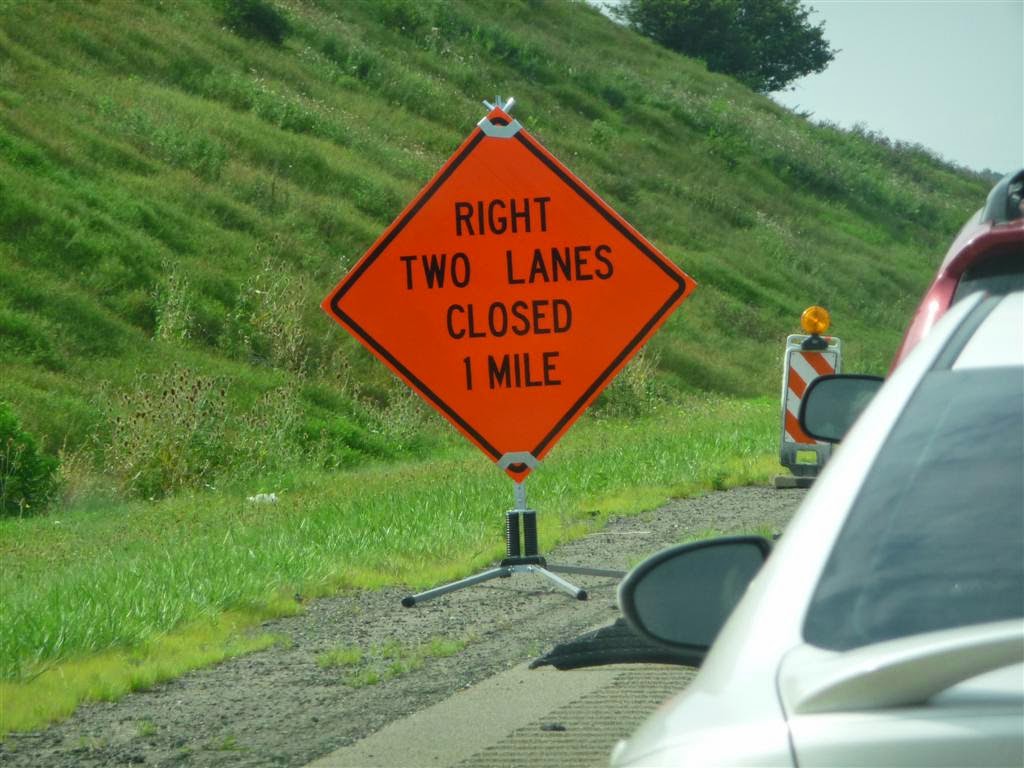 A bad sign to see on a busy road 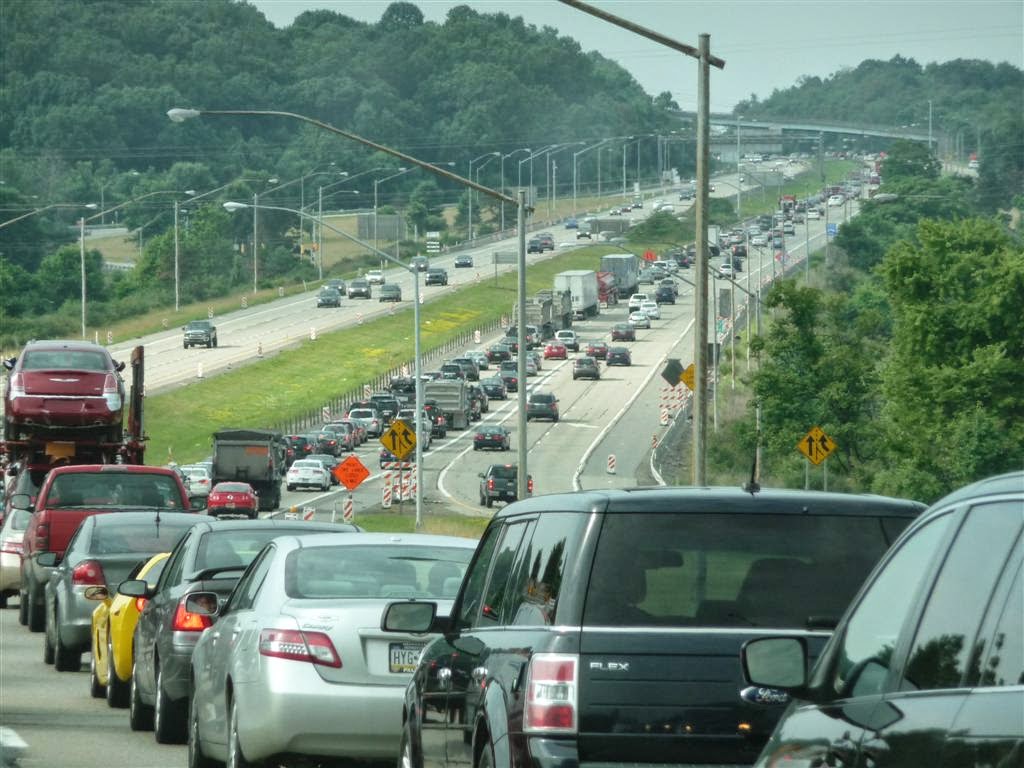 All this into one lane 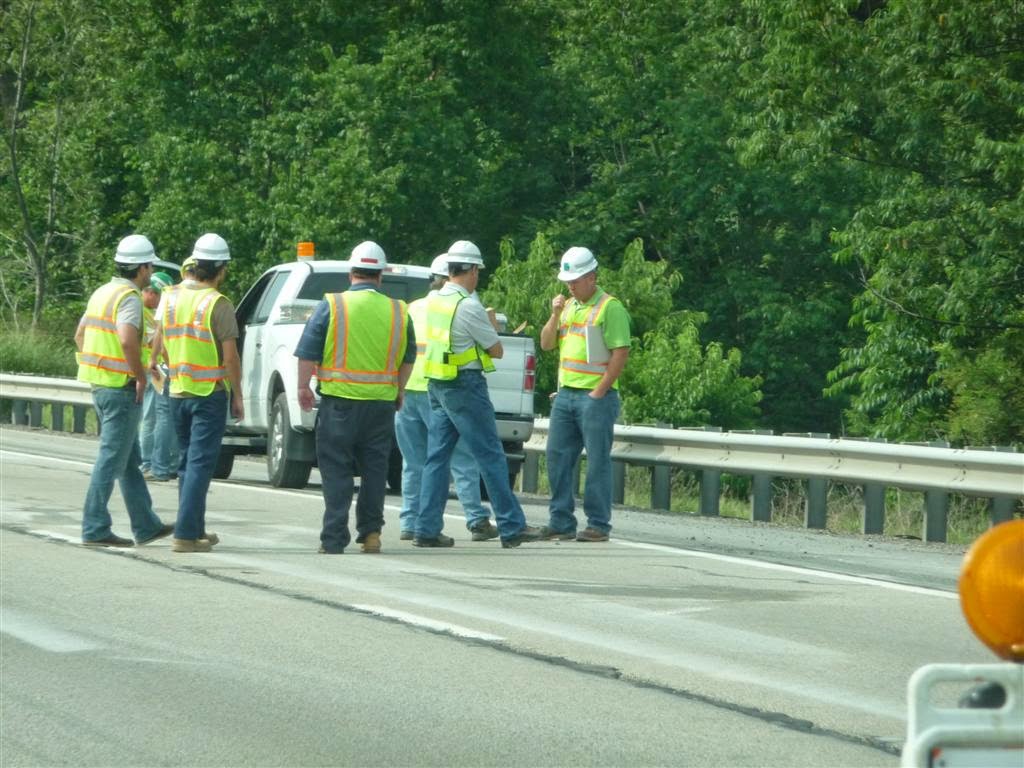 Typical gathering on a construction site 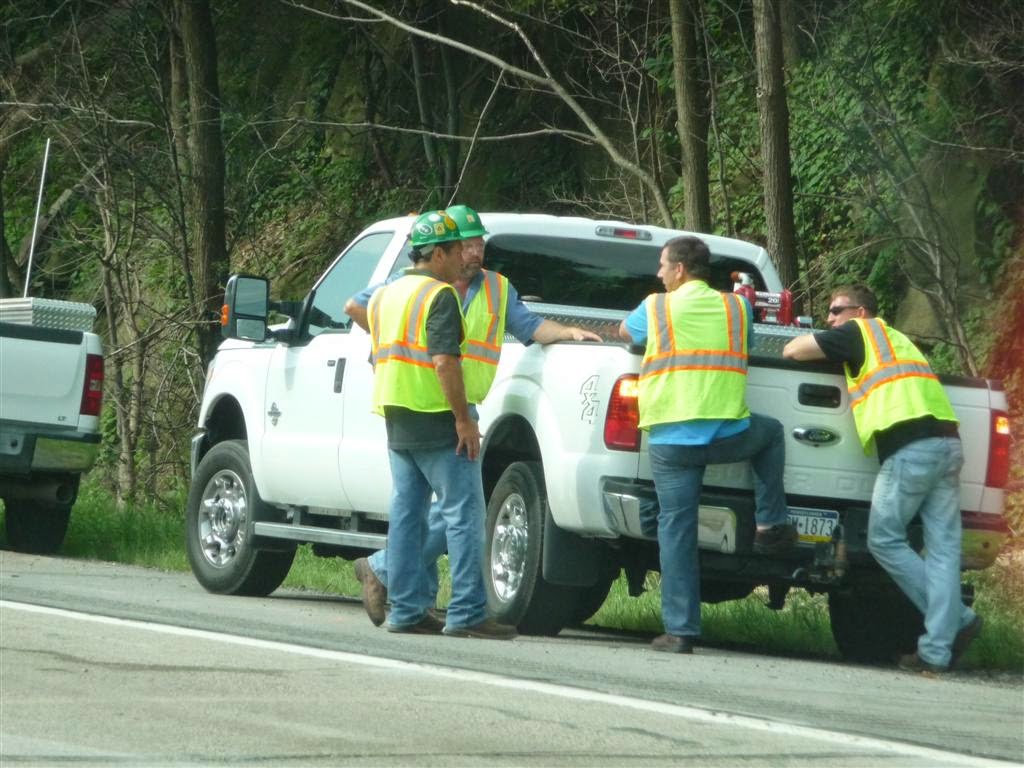 We continued on past Pittsburgh and into West Virginia, stopping briefly at the Welcome Center. A ways down the road, we stopped at Bridgeport for lunch. Rather than grab and go, we went into a Bob Evans and each had the half sandwich/soup lunch combo. I had a turkey bacon sandwich and vegetable beef soup. Quite tasty. Sandy had a chicken salad sandwich and chicken noodle soup. The noodles were huge and plentiful. She wasn't able to finish it. The manager used to live in Upper Michigan and fished around Hawk Junction and then up near Hearst. Not often do we find someone down here who knows anything about Northern Ontario. 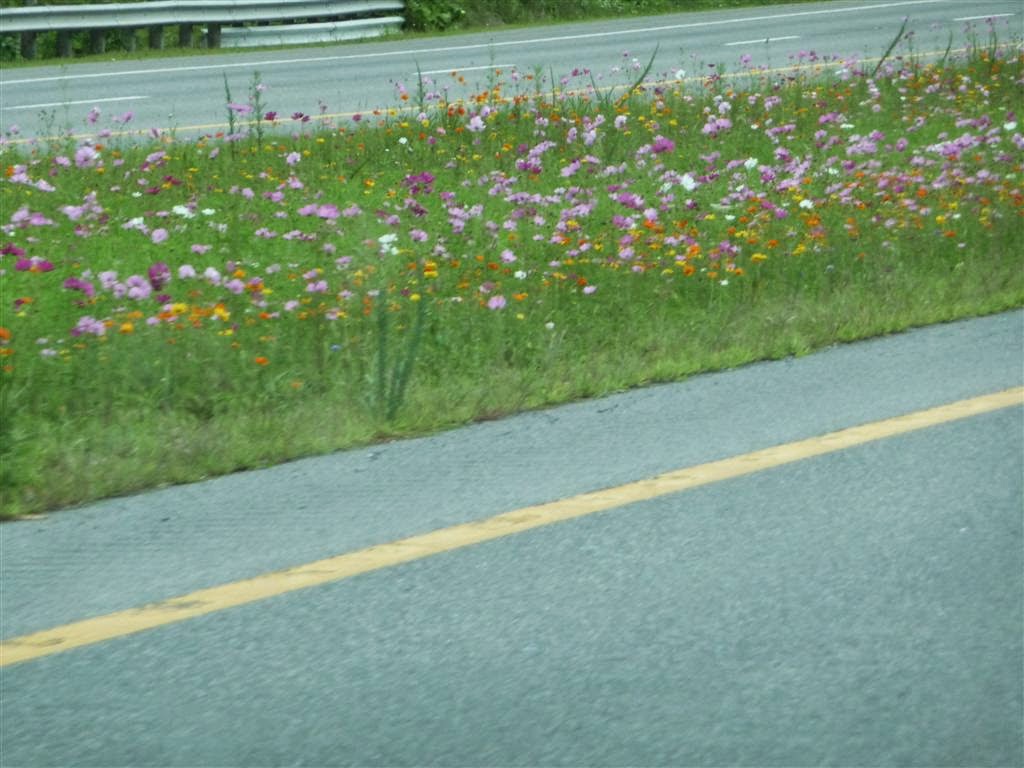 Even the medians are pretty down here 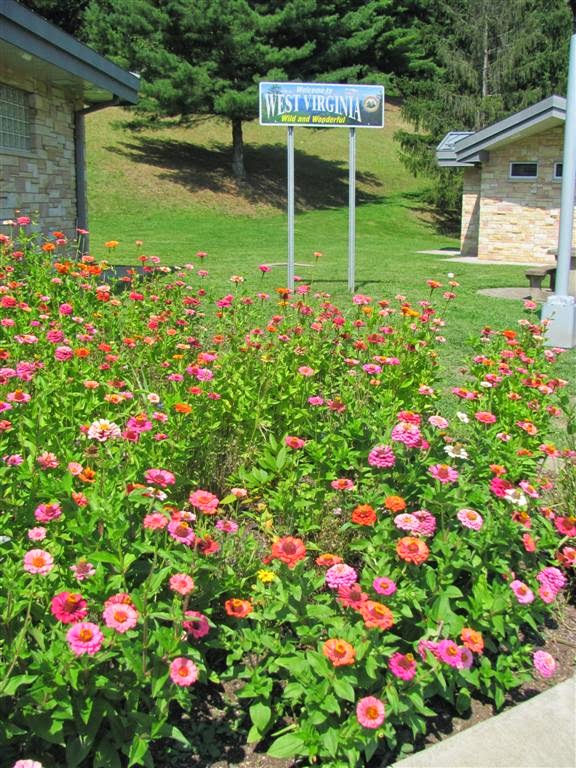 We fueled at the adjacent Go-Mart and then continued south on I-79. There was one more stop at a pretty little Rest Area before we exited on US 19. 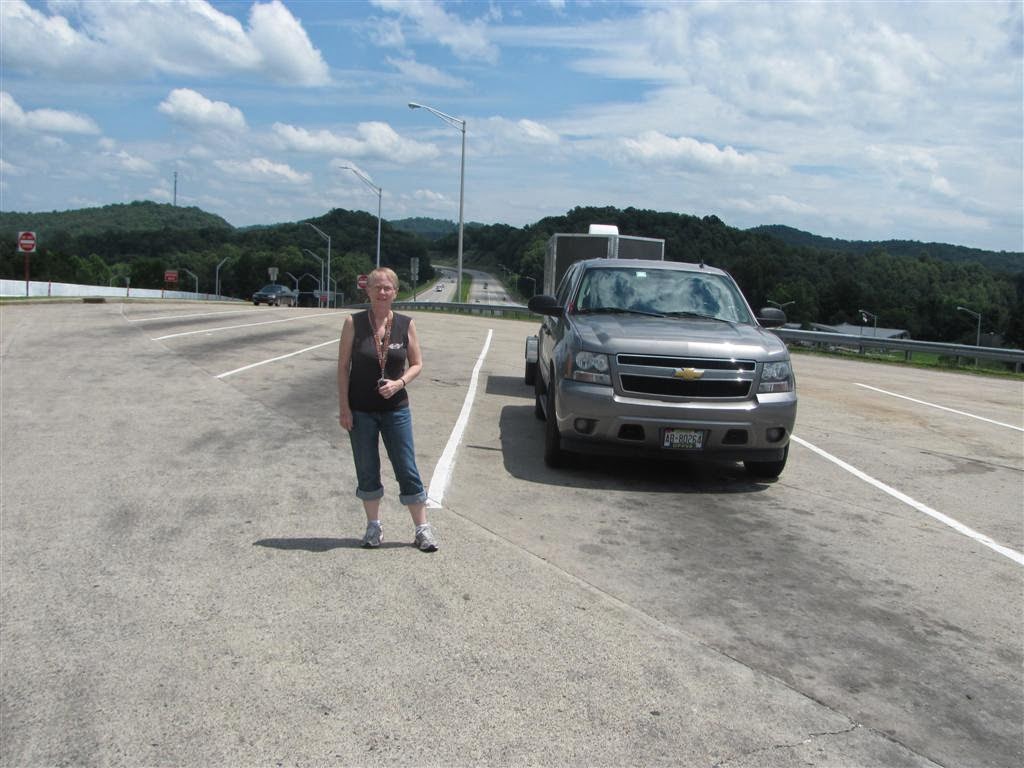 Looking back on I-79 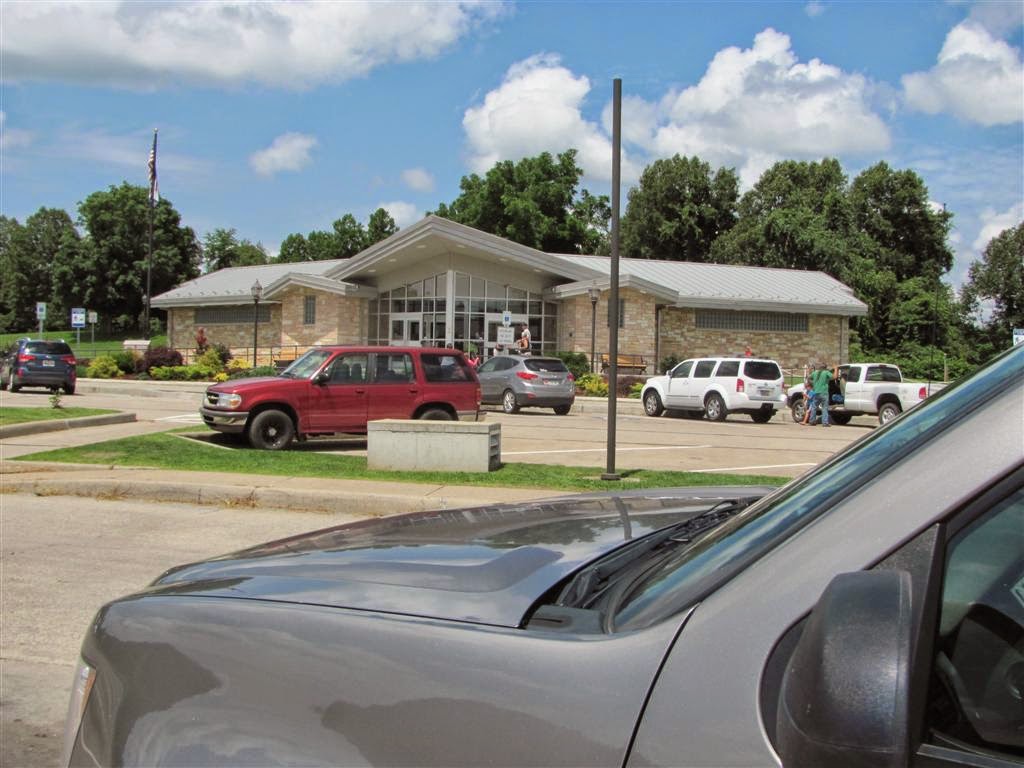 I wish we had these at home

The drive down US 19 through Summersville and Fayetteville to Beckley was uneventful. We got onto I-77, where we continued to the WalMart in Princeton. I remember a couple of nights in this lot back in the RV days, and the Wing turned 100,000 kms about a mile from here. We bought some supplies and I got new socks and underwear.

It was only thirty miles to Wytheville. We had no problem but the northbound side of Big Walker Mountain tunnel was  blocked or restricted. Traffic was lined up for 5 1/2 miles, almost to our Exit 41. 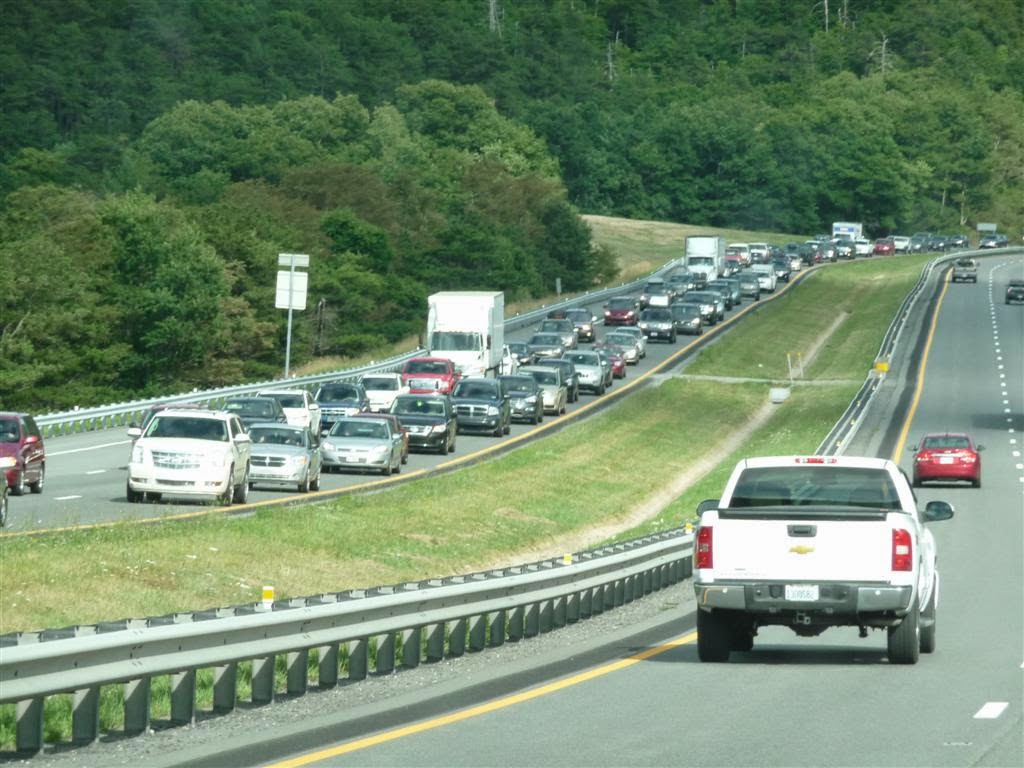 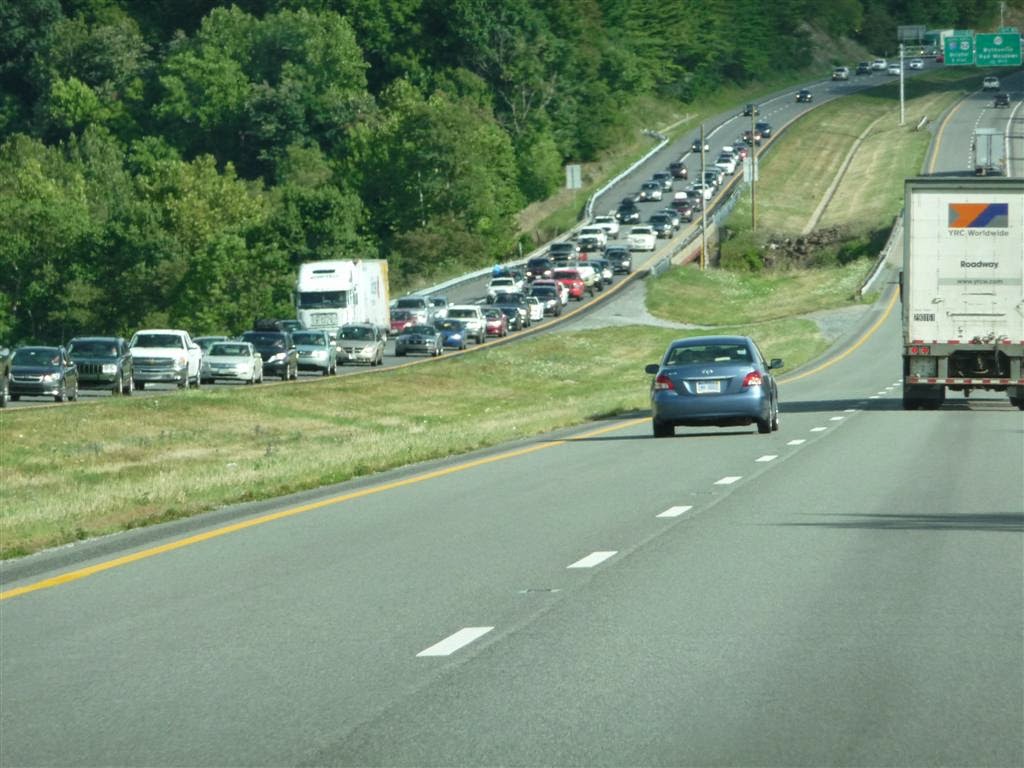 Five and a half miles later

The Super 8 was undergoing renovations, with large containers in the front lot. The rear lot was cramped and the desk clerk suggested we park on the street. In contrast to last night, this was the smallest king room I have ever seen. I unloaded and then went back to the street to park.

The Sagebrush Steakhouse was next door and it was packed. That was a good sign. We walked over and, after a short wait, were seated. I had their smallest prime rib (medium rare) with vegetables and mashed potatoes. Sandy had ribs, mashed and broccoli. The prime rib was good with the horseradish they brought and Sandy said the ribs fell off the bone.

Lucky Al called to say he got held up and would see us tomorrow in Bryson City. 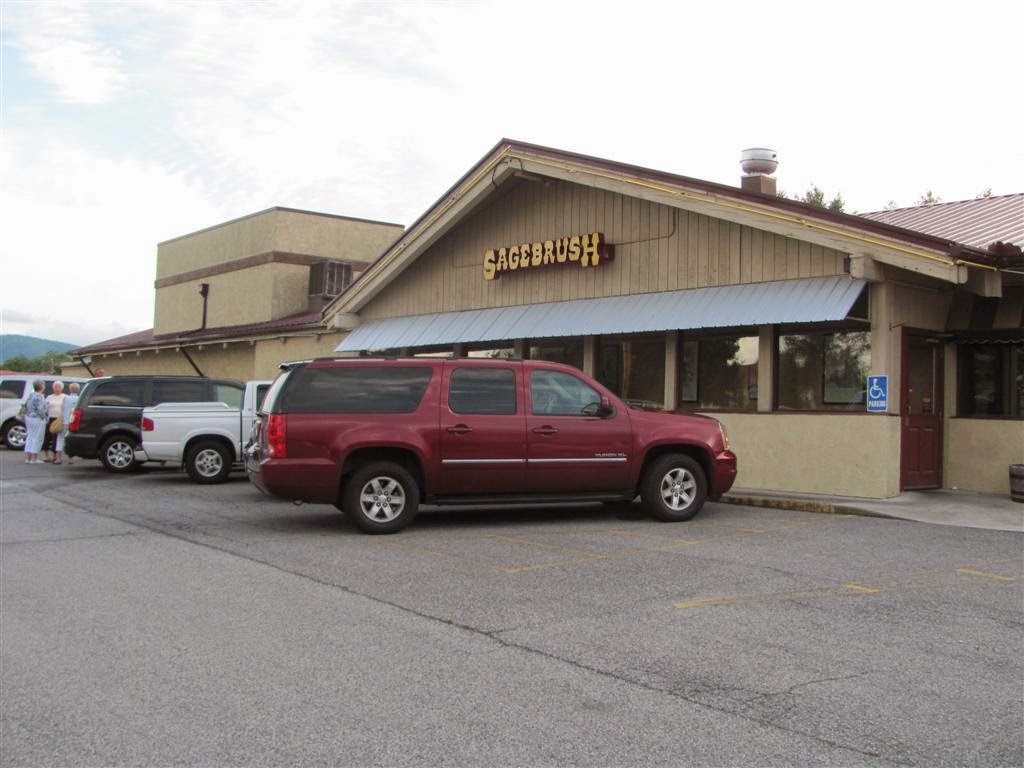 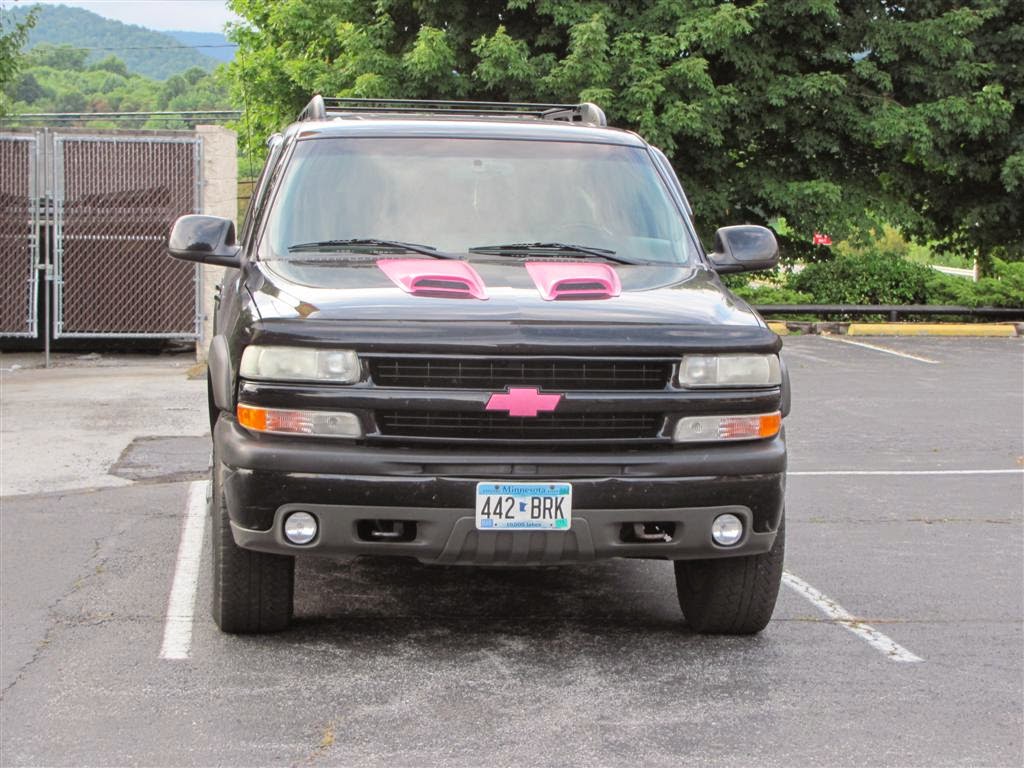 I guess they are colorblind in Minnesota

About 9:00 PM, it was raining and the back lot was still empty. I didn't like the truck on the street so I moved it onto the lot and parked at the back end. Wouldn't you know that around 9:30, cars started to come in from everywhere. We will be waiting for some to leave tomorrow so I can get out without having to back up all the way. No problem because it is just a short hop from here to Bryson City. Oh yes, the walls weren't very soundproof either. 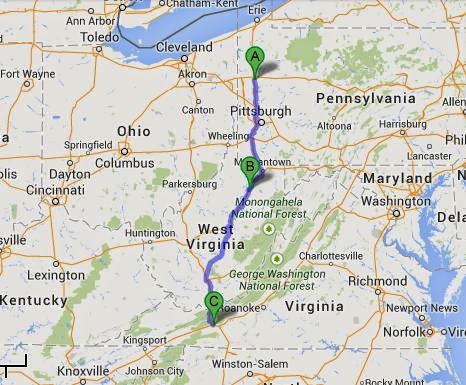