I had planned to ride a south loop today but, instead, I stayed back with Sandy. Flip led the ones who wanted to go. We didn't do much except chat and visit during the morning. 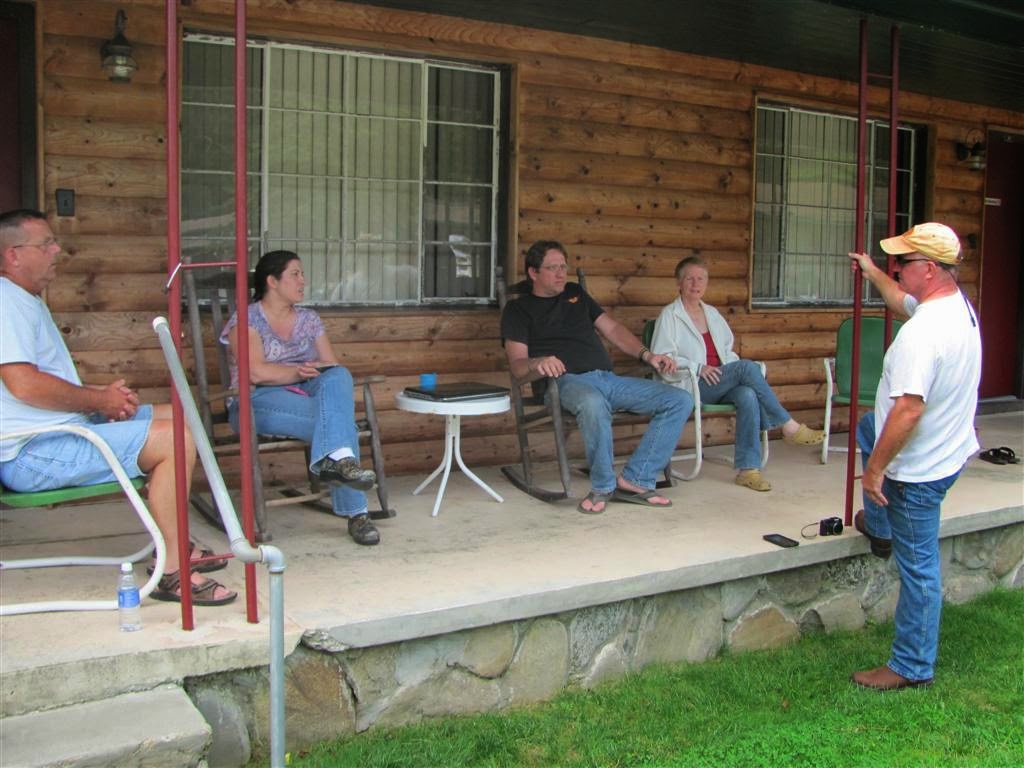 In the afternoon, a few of us decided to go to Bryson City for ice cream. Phillip, Jaime, Caleb, Mal, Yvette, Butch and Teresa joined us. When I got to Everett Street, the light was red so I stopped. Then, seeing nothing was coming, I turned right. For all the times I have done this, I never noticed the "No Right Turn On Red Light" sign. Phillip pointed it out to me.

Returning to the bikes, there was a couple from the Georgia coast admiring the sidecar. We had a pleasant talk with them. Sidecars are one of the greatest ways to meet new people. Then we went down to Clampitt's General Store to get Caleb an elastic band balsa airplane just like CheapB had.

On the way back to the Lodge, Sandy and I saw a couple of familiar bikes with Florida plates at the BBQ place, so we stopped in to say hello to Badger and Susan. 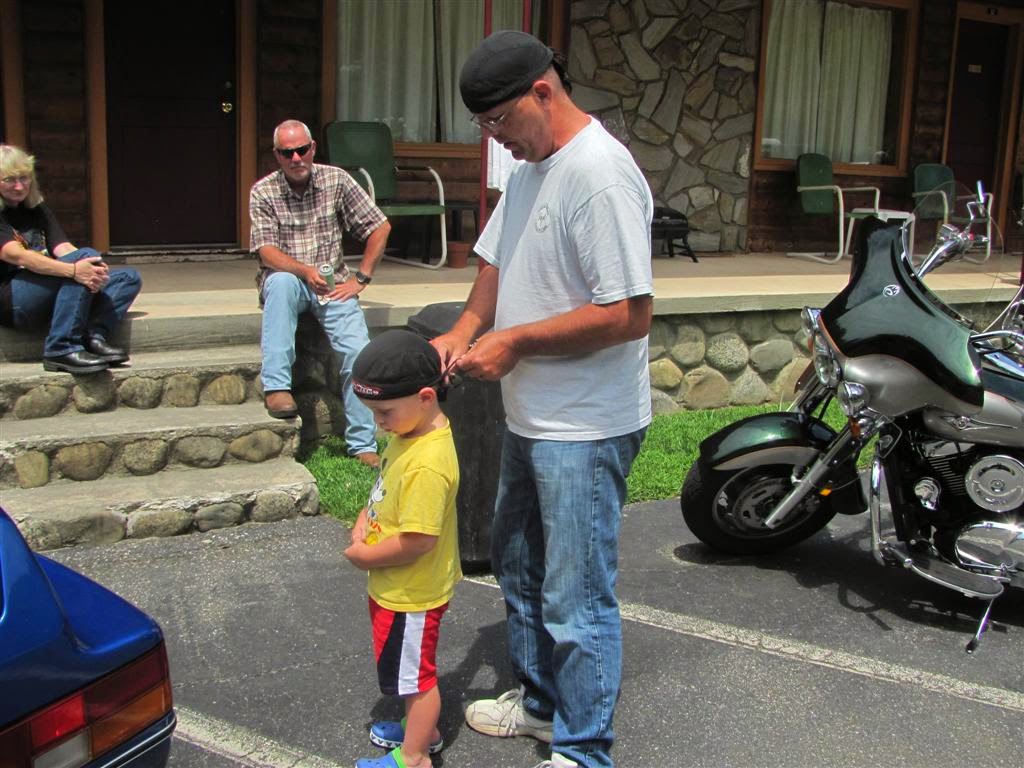 Caleb getting ready to go to town 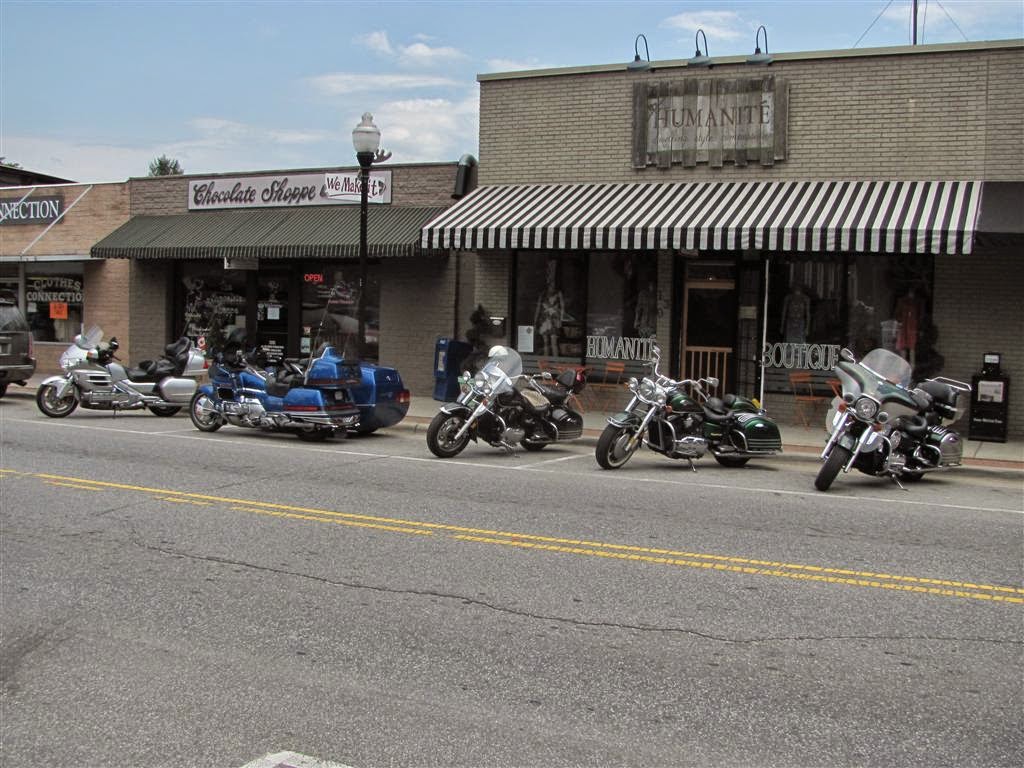 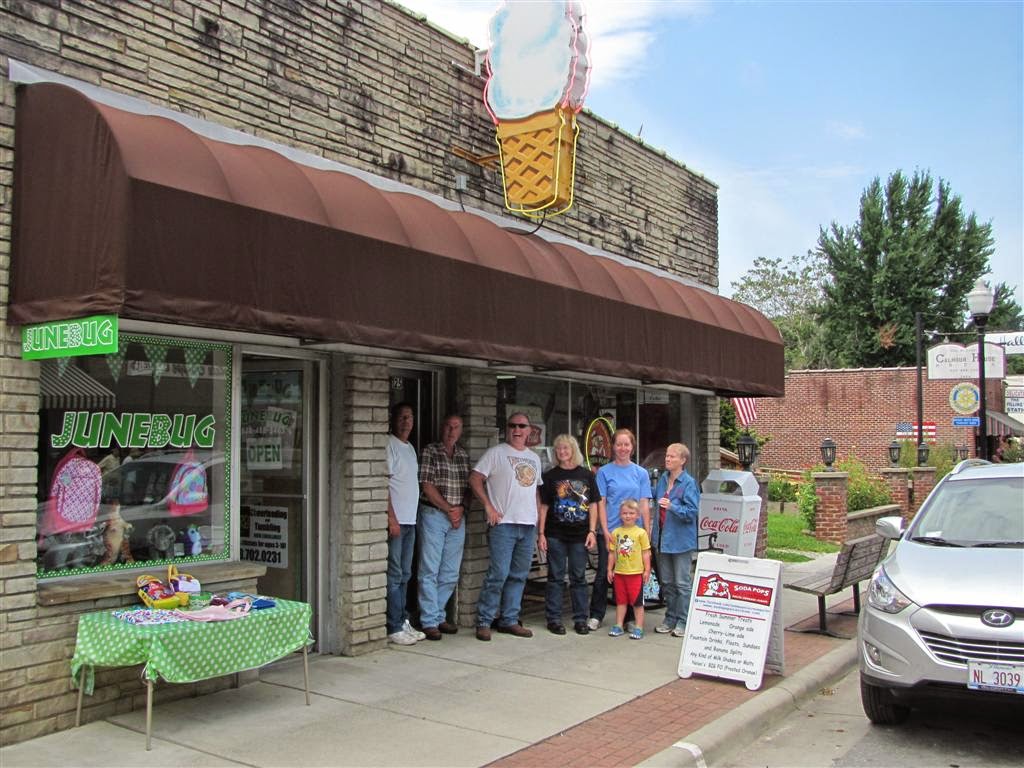 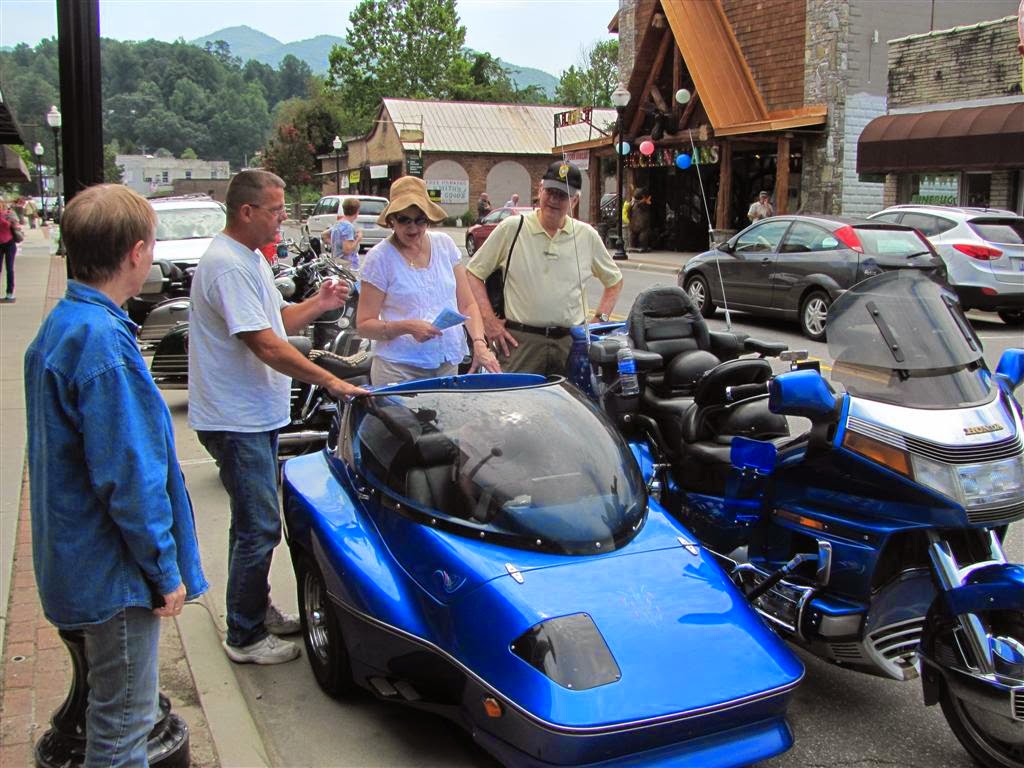 You meet the nicest people with a sidecar 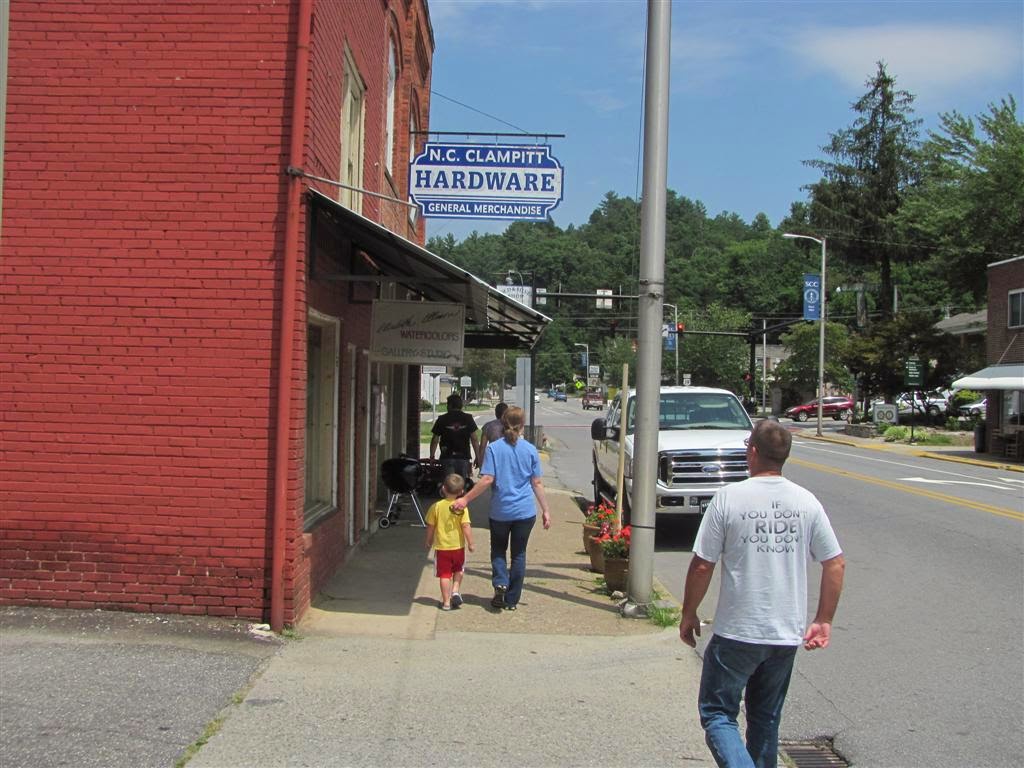 Going to buy an airplane 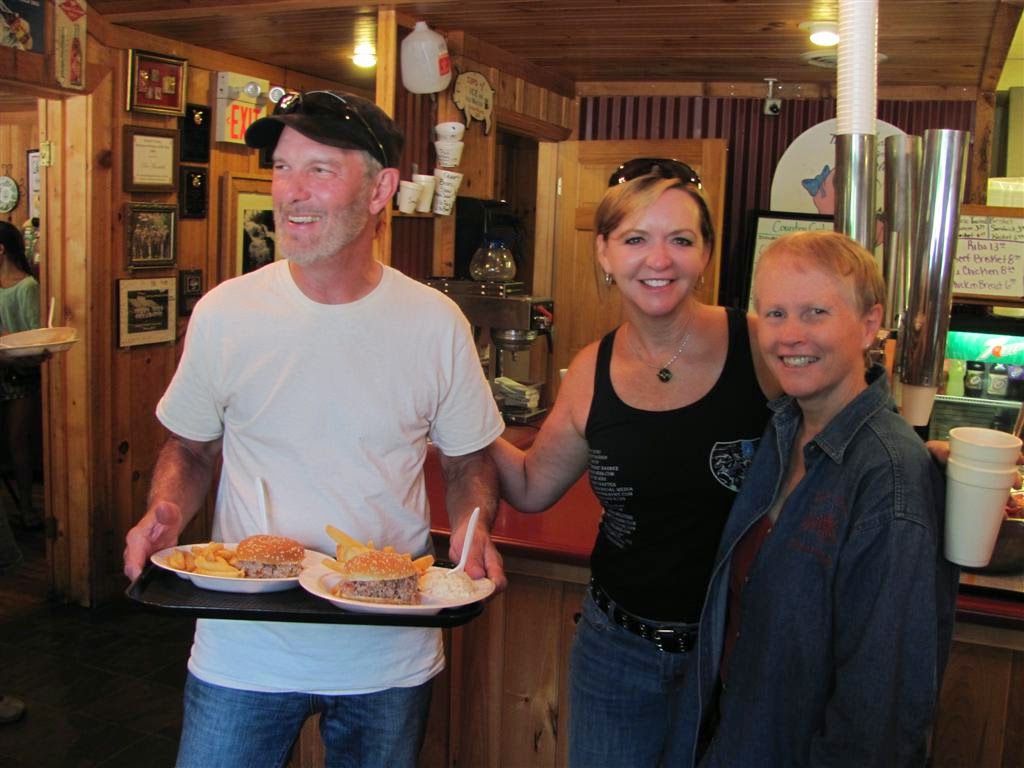 Back at Two Rivers, the Meet and Greet started at 5:00. It was the same menu that Blain and Kathy prepared for the Freedom Riders back in June. Hamburgers and hot dogs, beans and potato salad, followed by three kinds of cobbler and ice cream.

I presented Blain and Kathy with a plaque prepared by Danielle on behalf of the Freedom Riders commemorating the 2014 President' Ride. The photo was taken at the Dragon sign the day that Blain rode with us back in June. 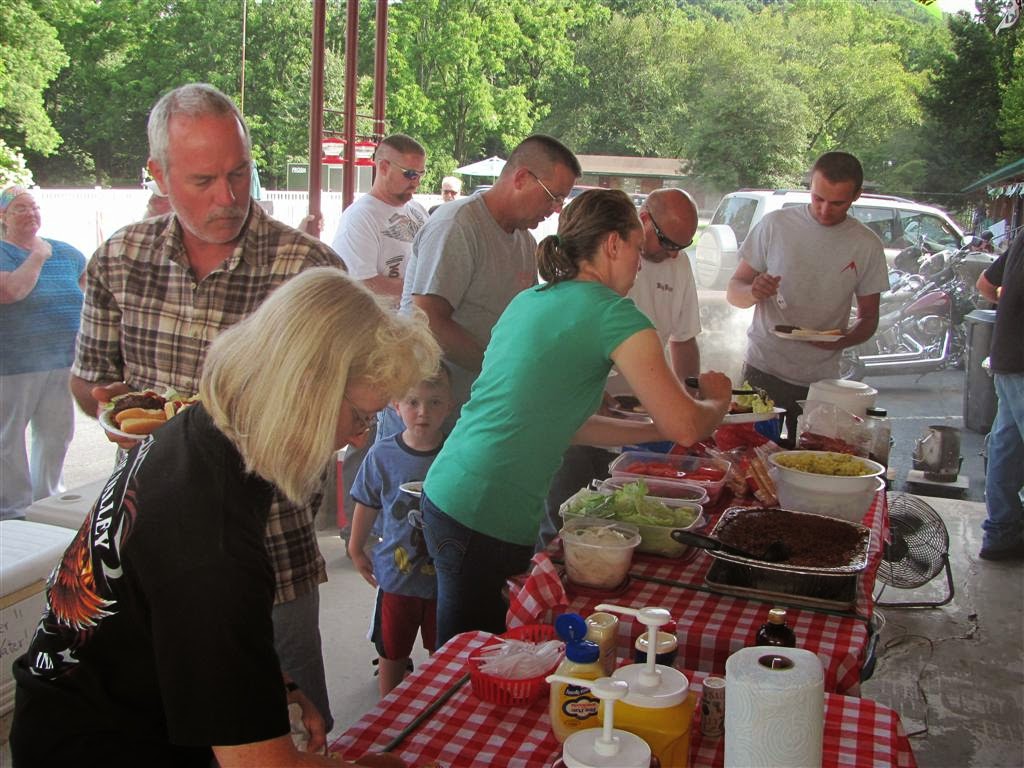 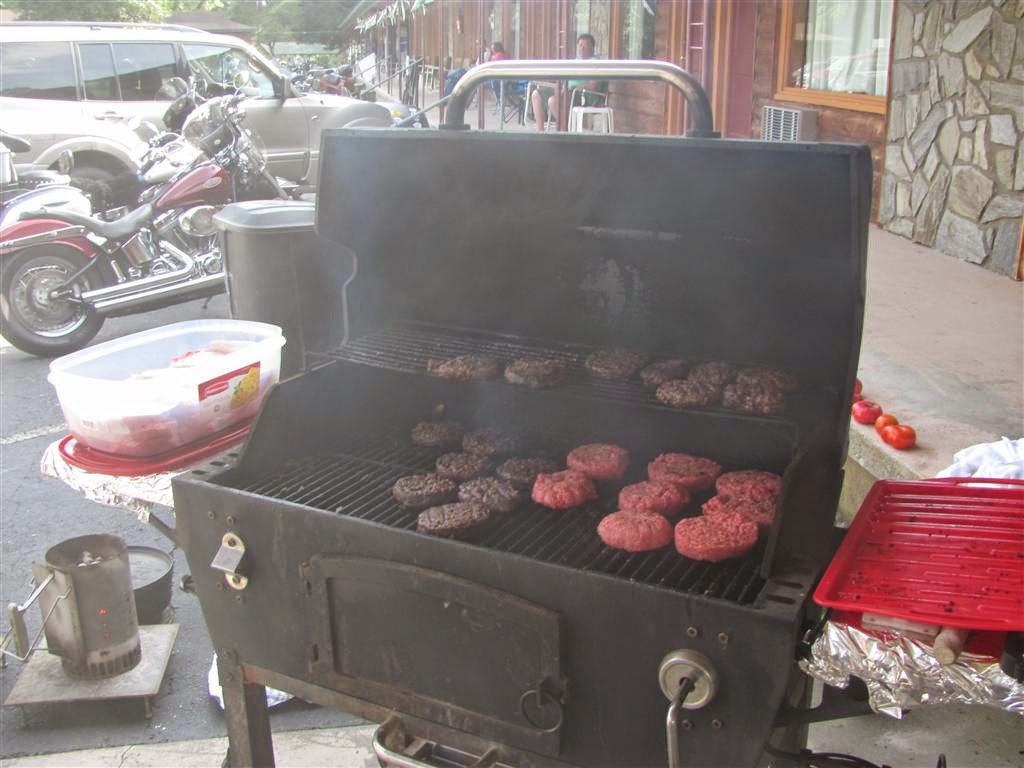 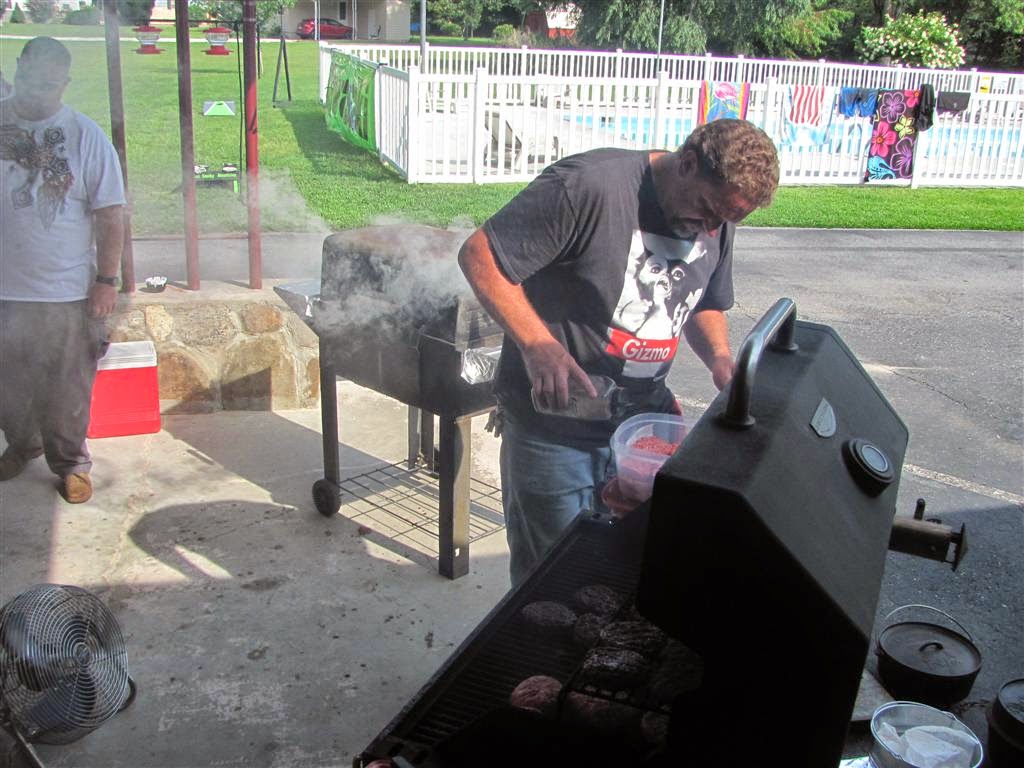 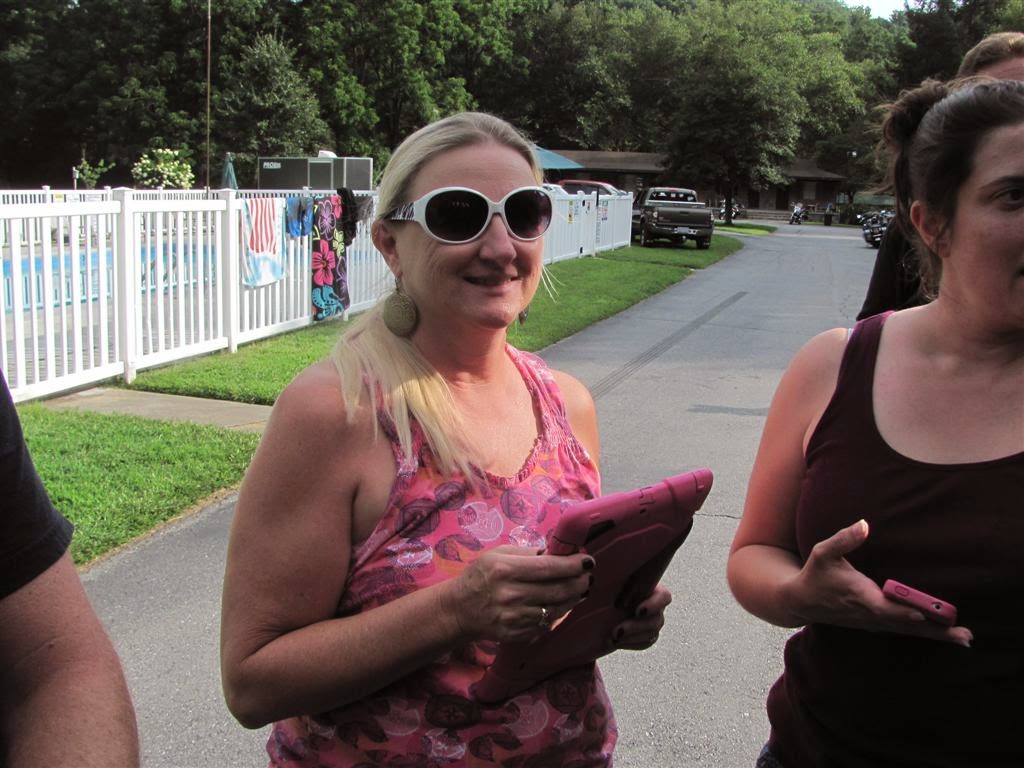 Southern Charm and the ever present pink tablet 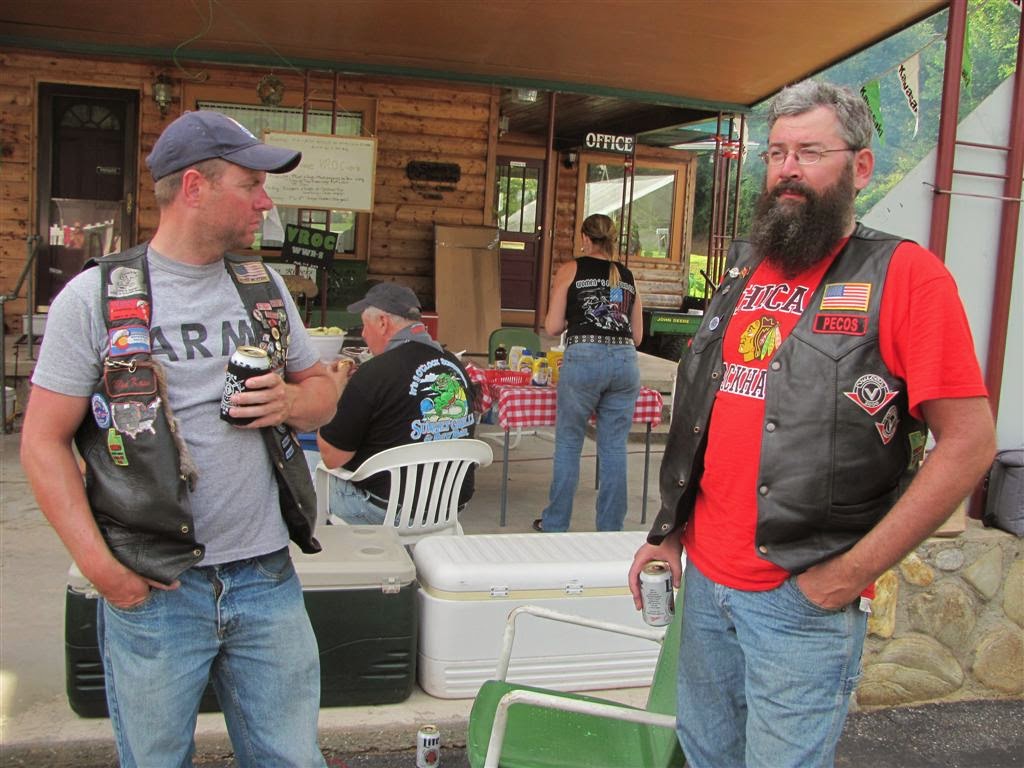 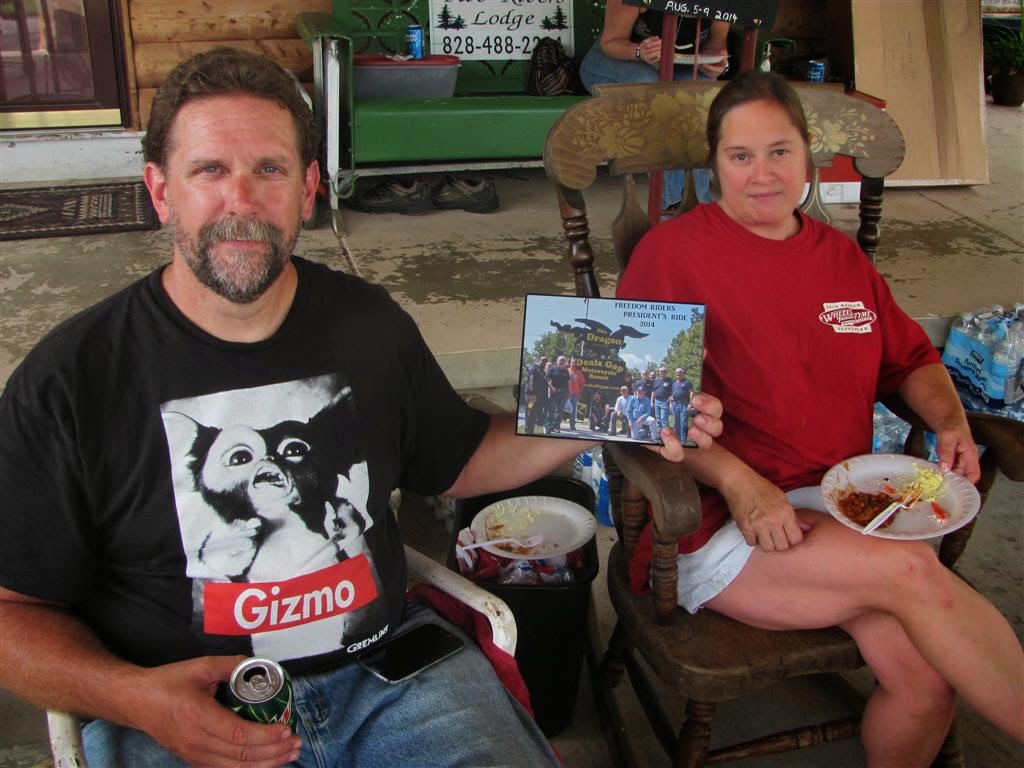 Blain and Kathy with the Freedom Riders plaque 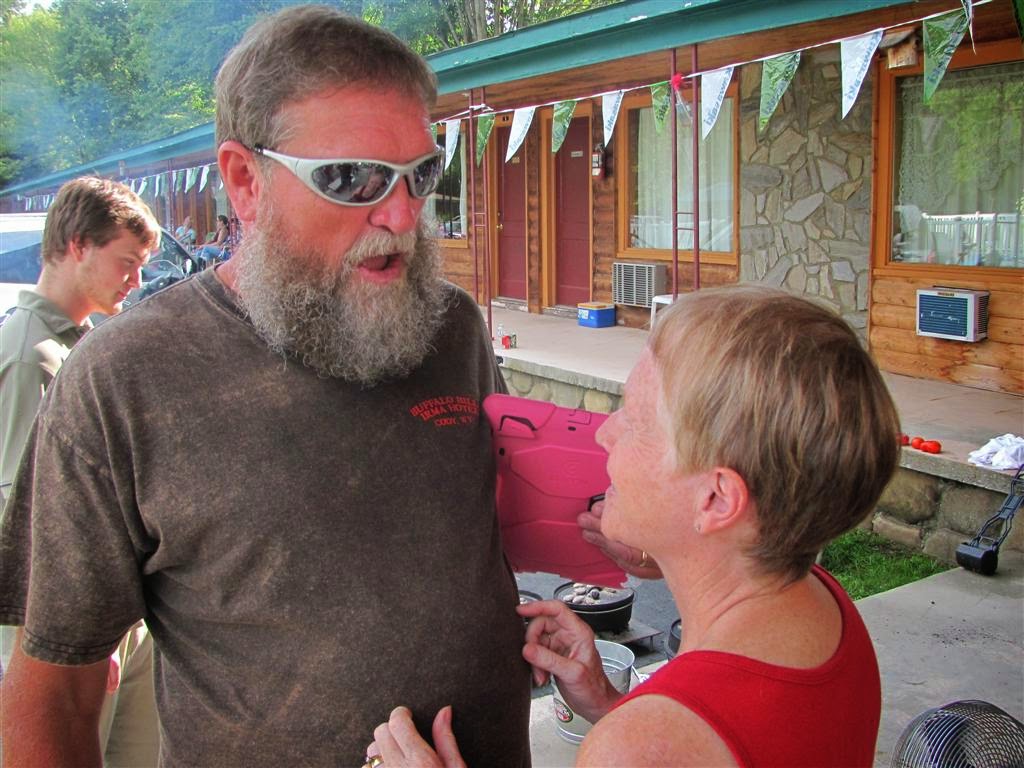 Sandy and our oldest son 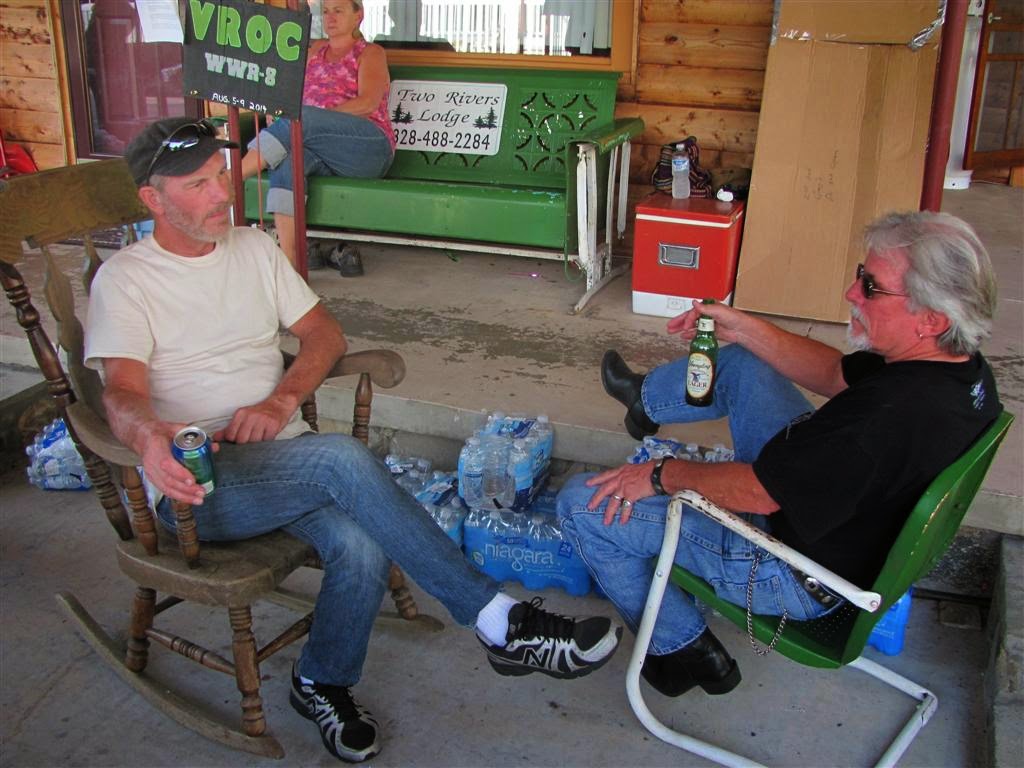 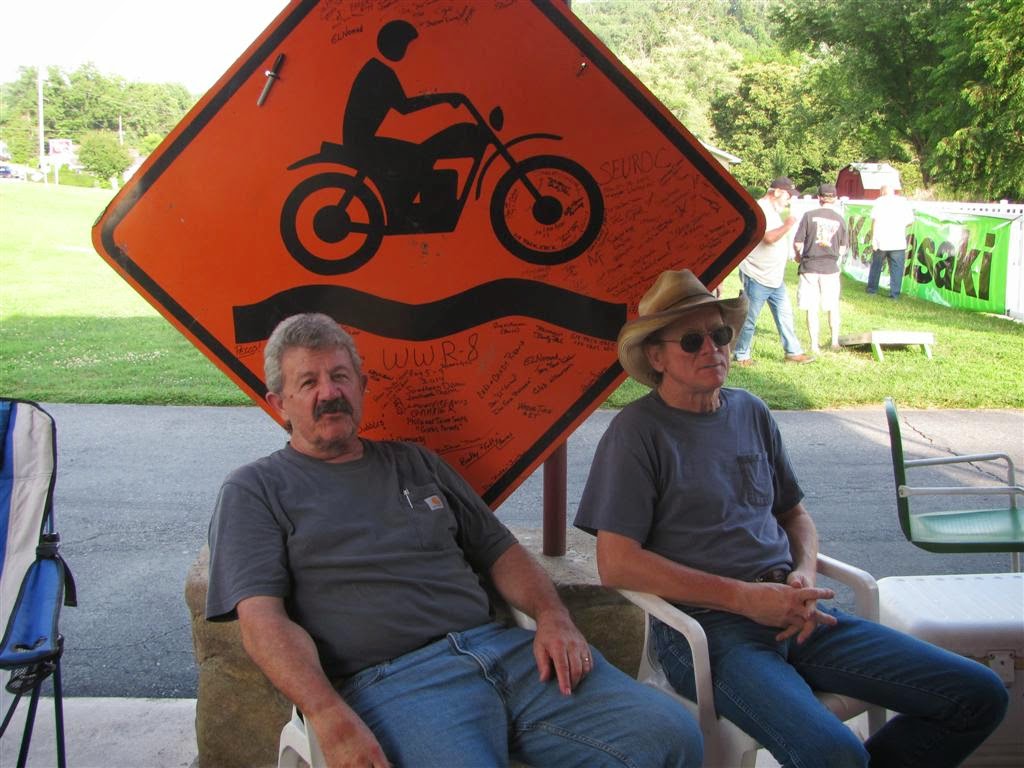 Solo and El Nomad from Colorado

The Cornhole Tournament got underway just as the entertainment was starting. Sandy decided not to play so Badger subbed for her. It made no difference because Bill's brothers skunked us in three ends. The game is normally to 21 but if one team gets to seven before the other team gets a point, that's all she wrote. We repaired to the pavilion where Elvis was just getting started. He put on a good show even if a few tunes, like Proud Mary and Sweet Caroline, weren't traditional Presley standards. 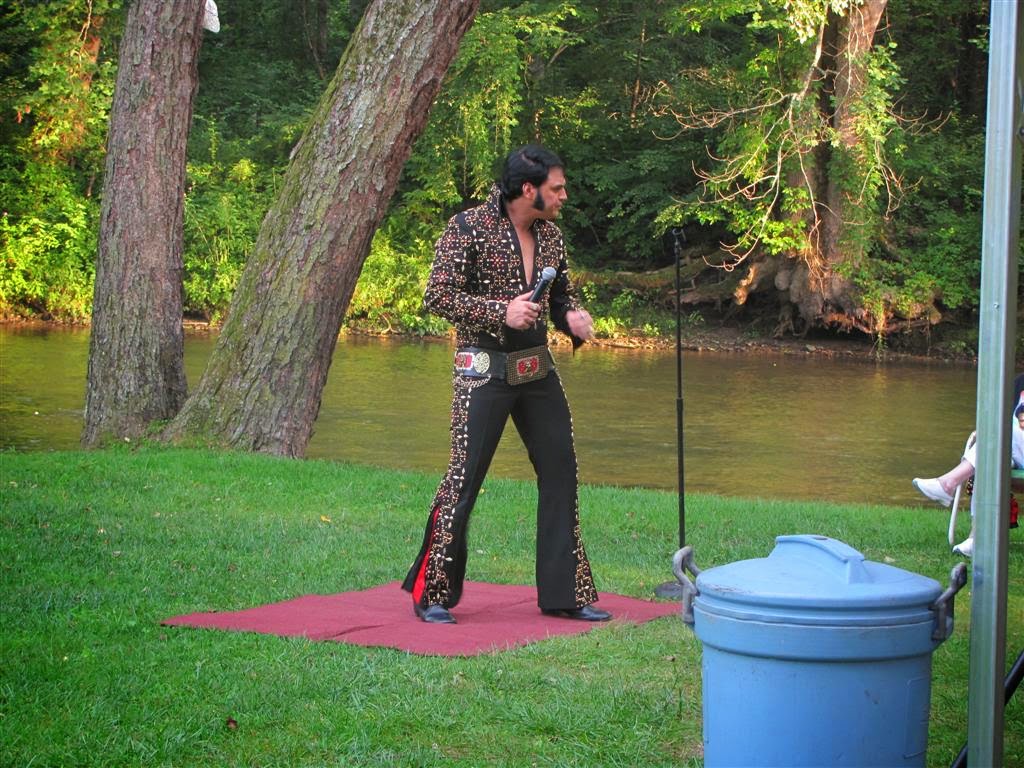 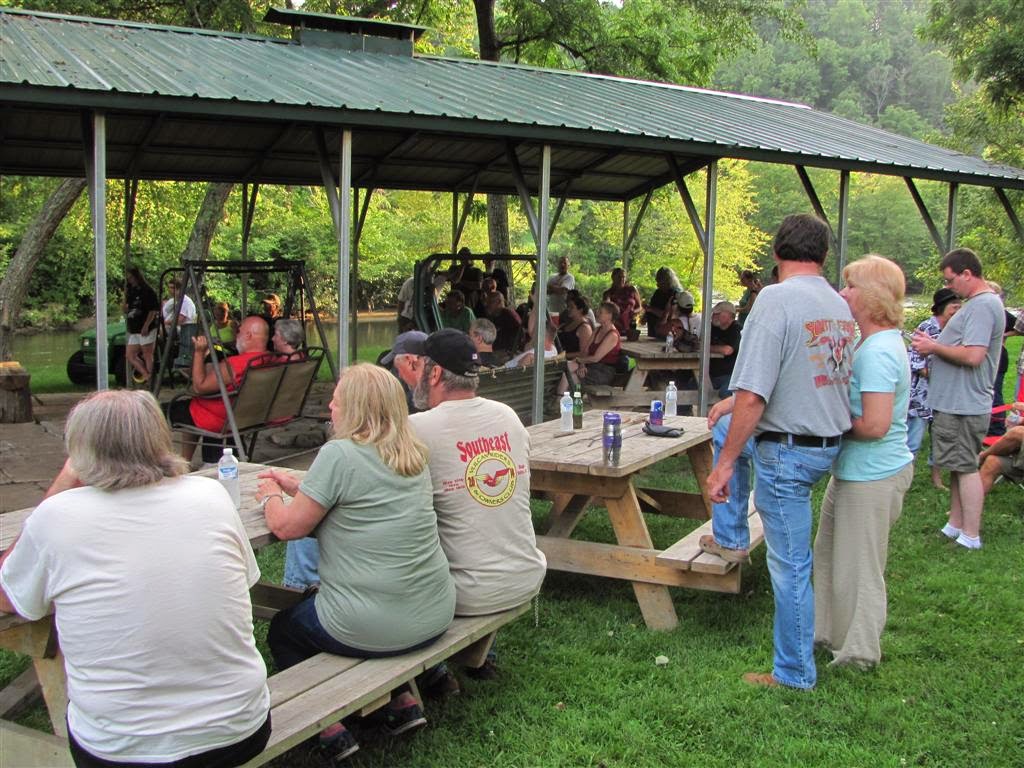 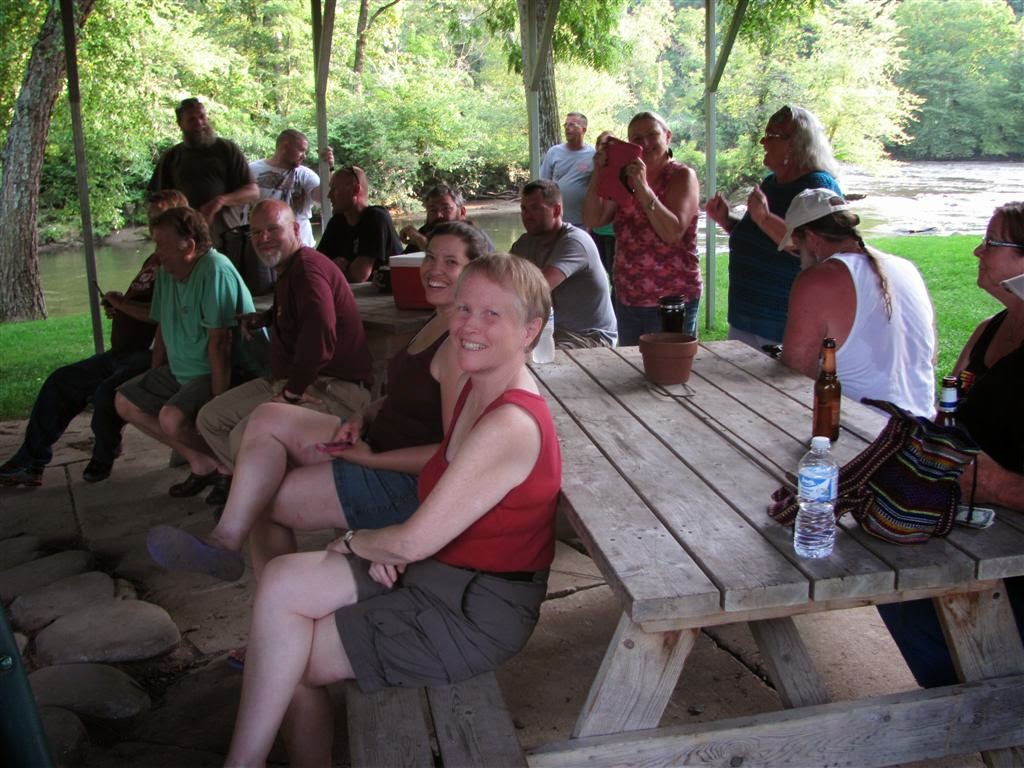 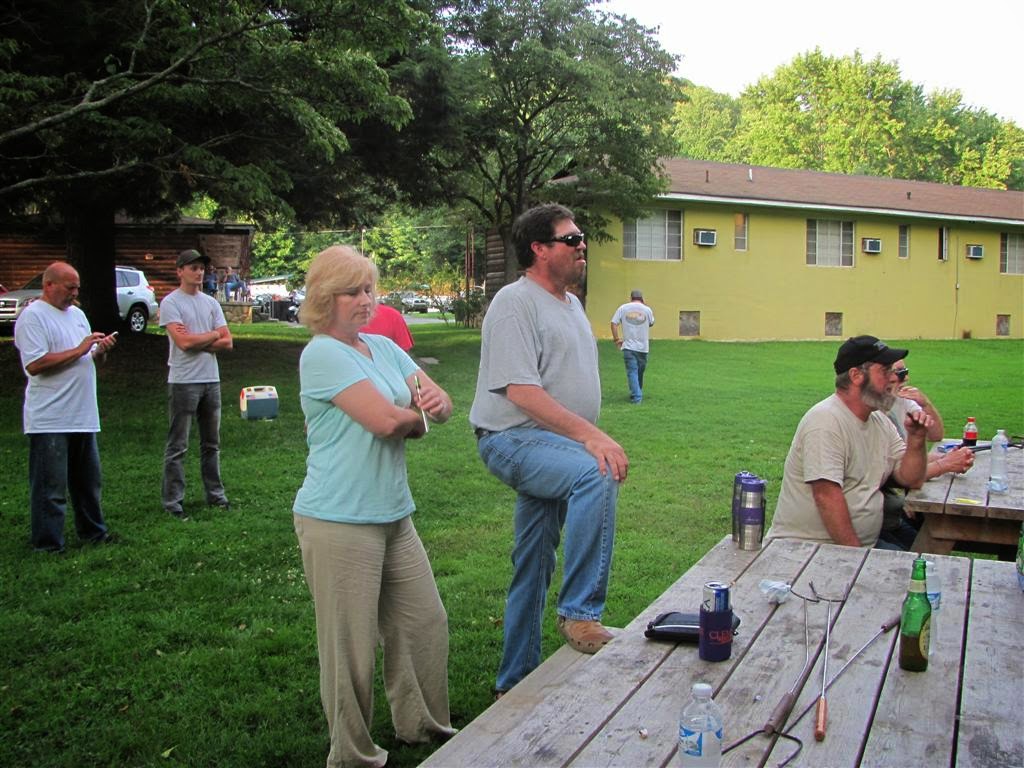 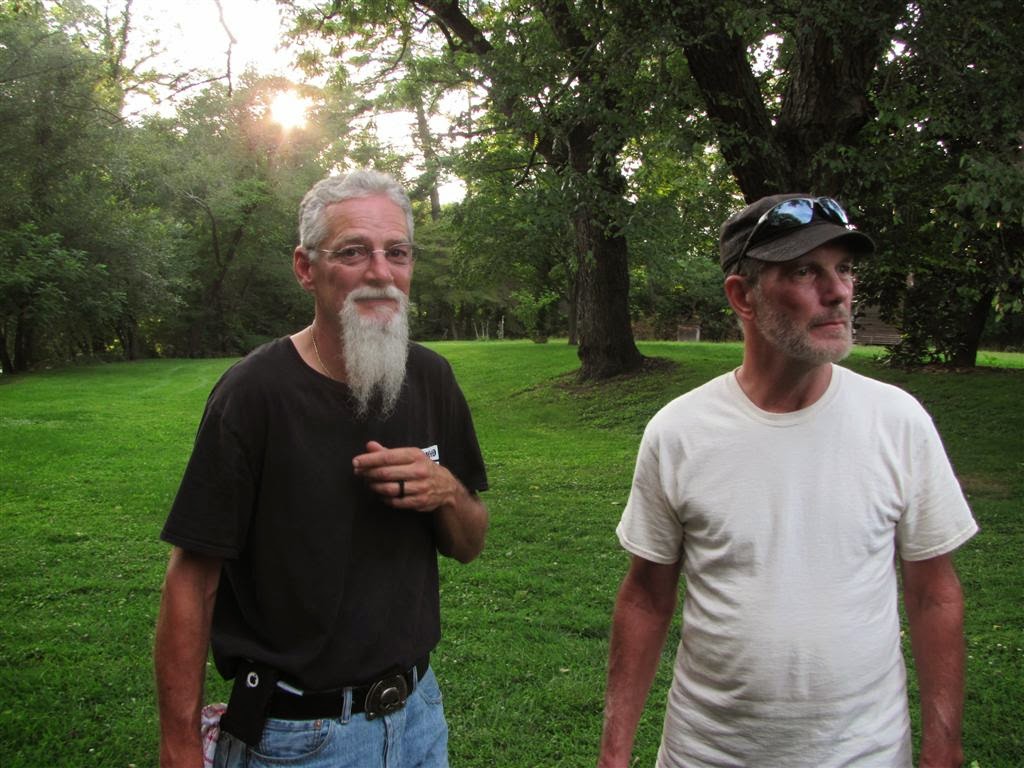 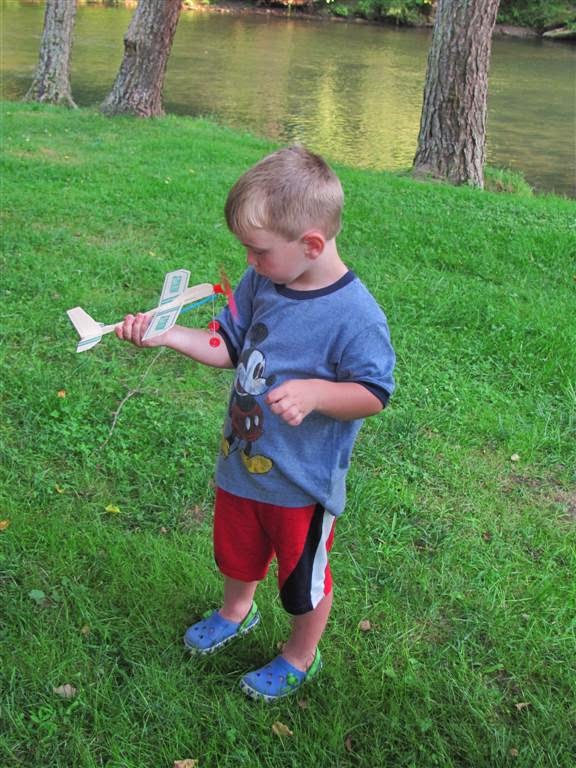 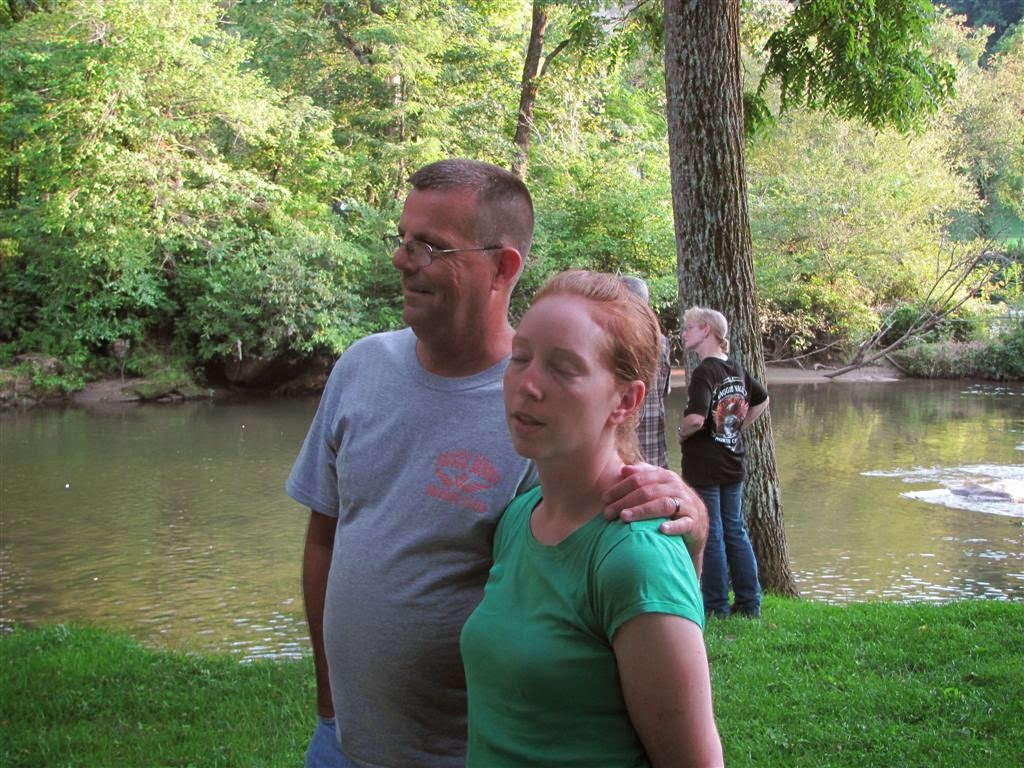 Phillips and Jaime (aka Caleb''s parents) 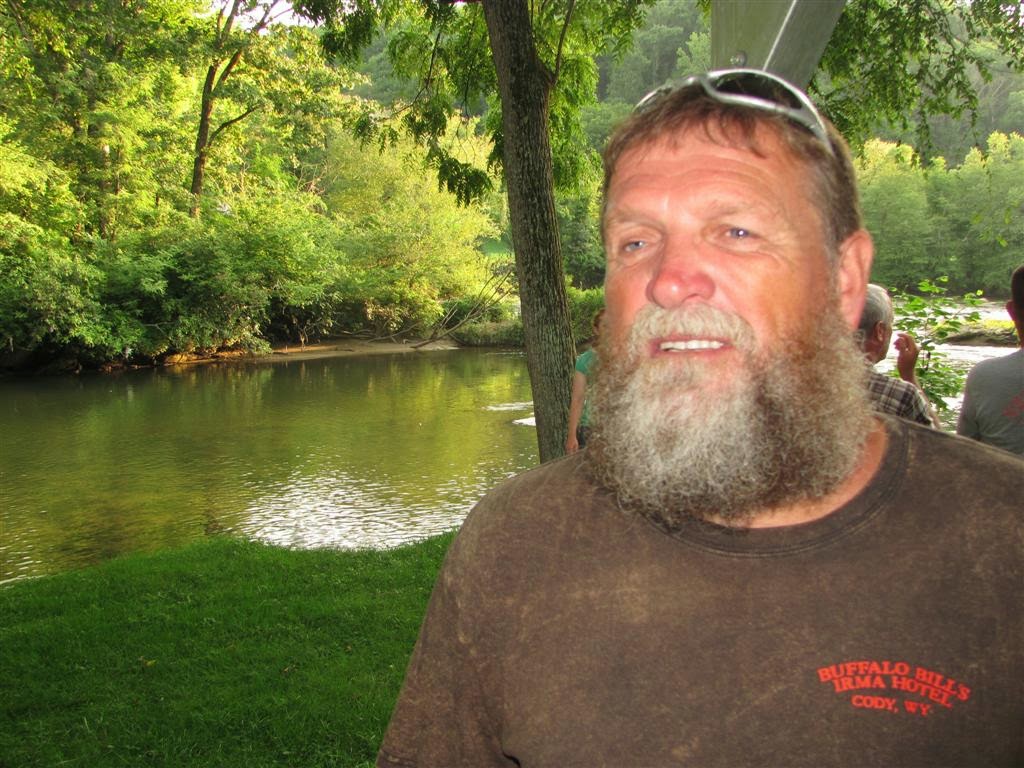 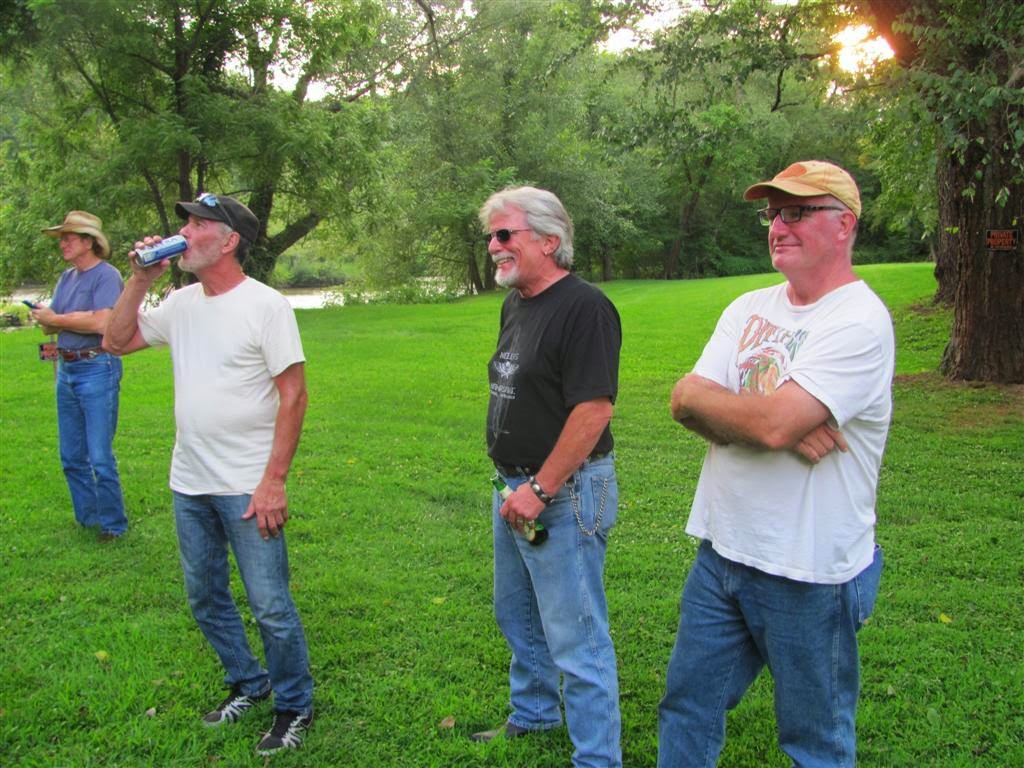 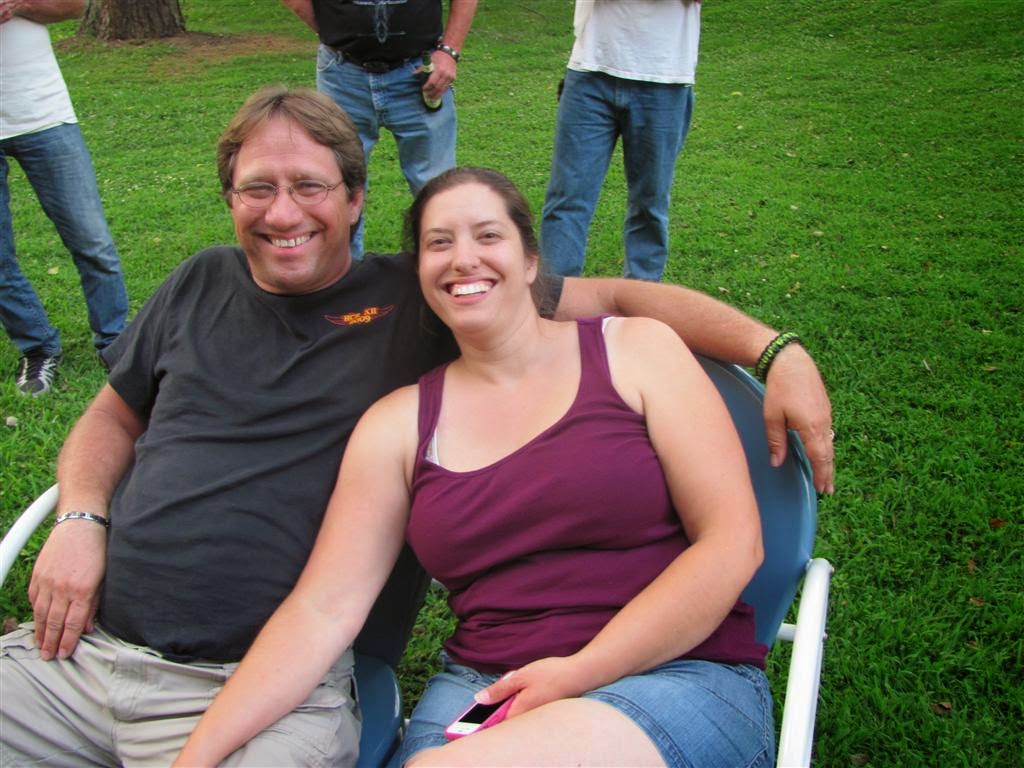 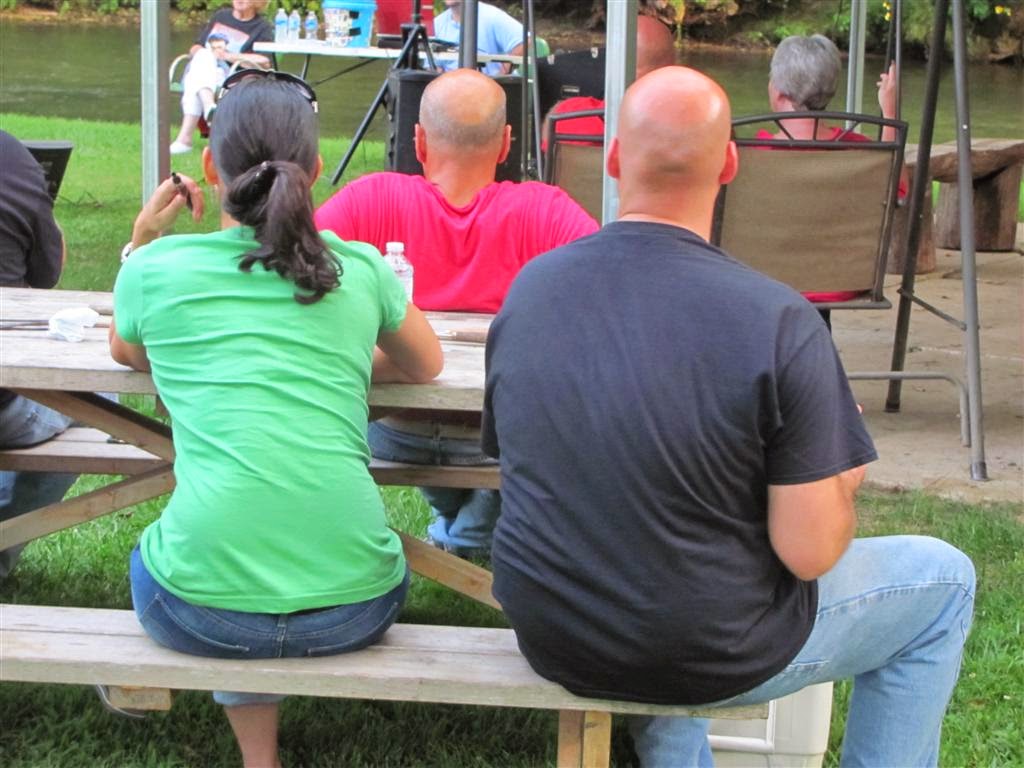 Beauty and the Beast (Renata and Flip)

When Elvis wound down after distributing many scarves (mostly to the ladies), we had a short round of Karaoke. Southern Draw started, followed by Renata, Lucky Al and an inspired tune by Flip. Southern Draw finished with a rendition of Go Rest High On That Mountain dedicated to those we have lost. There were some tears, mine included. 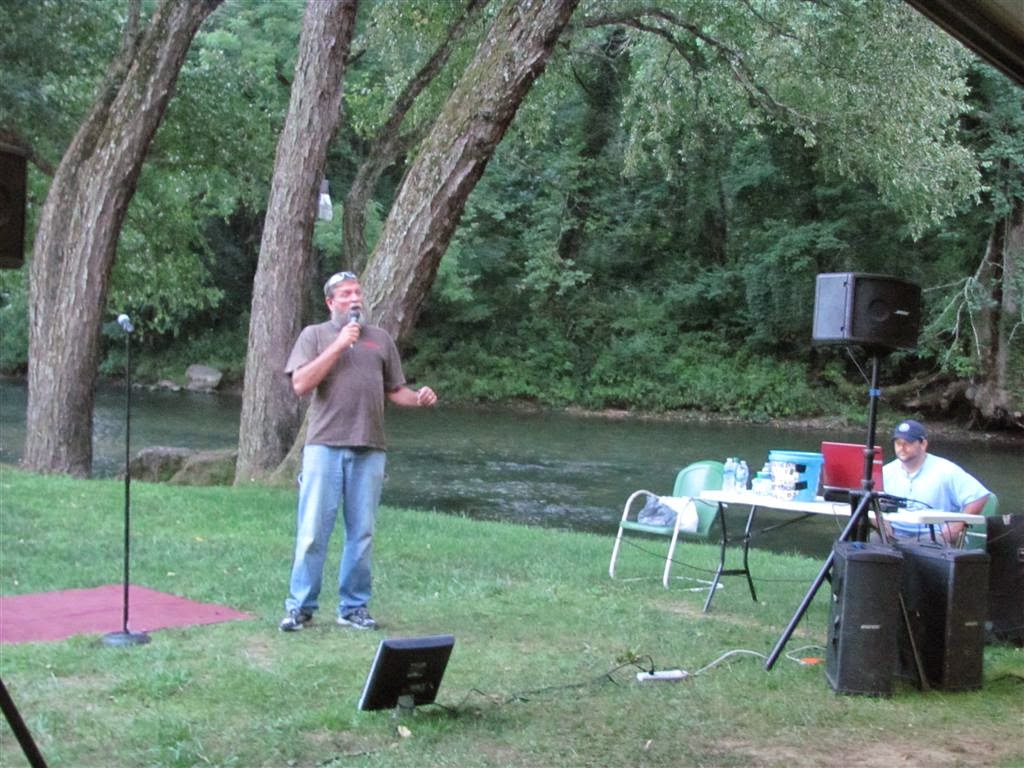 Southern Draw in his element 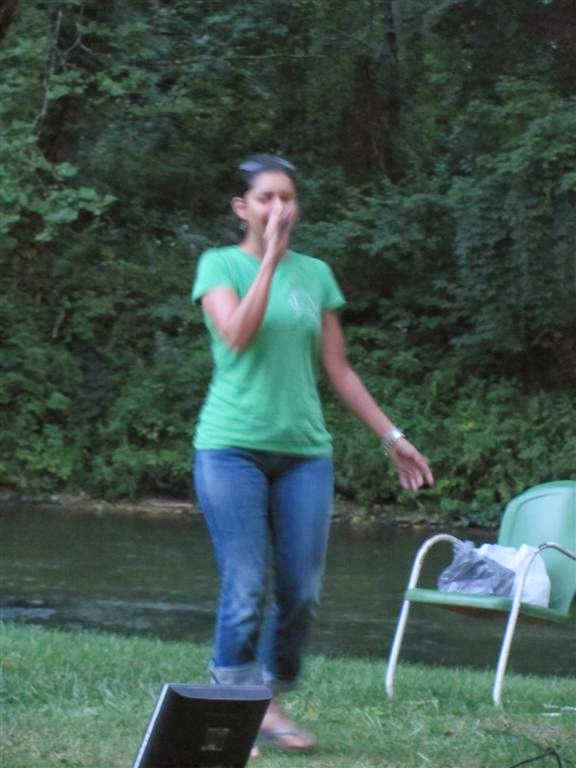 Renata doing Suds in the Bucket

With the music done, most of us adjourned to the long skinny verandah in front of the rooms. Phillip, TBone and I were talking when we noticed everyone else had turned in, so we called an end to the evening. It was about 10:30.
Posted by Jim "Skid" Robinson on 8/07/2014