I was awake at 4:30 this morning, using the early time to do some month end jobs like reconciling Jan's and my bank accounts and printing some reports. I saw on Facebook that Heather and Kim had arrived in Twinsburg, Ohio for the annual Twins Days Festival. Tom and Jasper went with them while Mike stayed at home with Robyn and Jolene. News said the Burlington Skyway was shut down on the Toronto bound side because someone in a large dump truck had attempted to drive under the superstructure with the box up. He's been charged with impaired driving. We'll be over that today, but going the other direction. Heather and Kim will probably have to detour on the way home.

Because of all the other jobs this week, I had to pack from scratch this morning, reinstall the hardware in the trailer and load the bike. Still, we were out of the driveway at 8:00 AM. We stopped at Jan's, got fuel, picked up breakfast at Tim Horton's and stopped by the Freedom Rally. There was not much going on there at this time of morning, so we said goodbye to the few who were up and were on the road by 9:00. All quiet at the Freedom Rally

There was heavy construction work at the Highway 64 intersection, thirty-five miles south of Sudbury as  the four-laning project continues. The little Holiday Golf Course looks like it was finally done because the access road was severed. About sixty miles south, we started to meet long lines of northbound vehicles following whatever slower driver they had caught up to. The long weekend had begun.

Nothing much happened until we got to the McDonald River, about fifty mile south of Parry Sound. Something large had taken out a section of guardrail and gone over the edge. We couldn't see what it was but one lane was closed as a rotator was working to recover it. 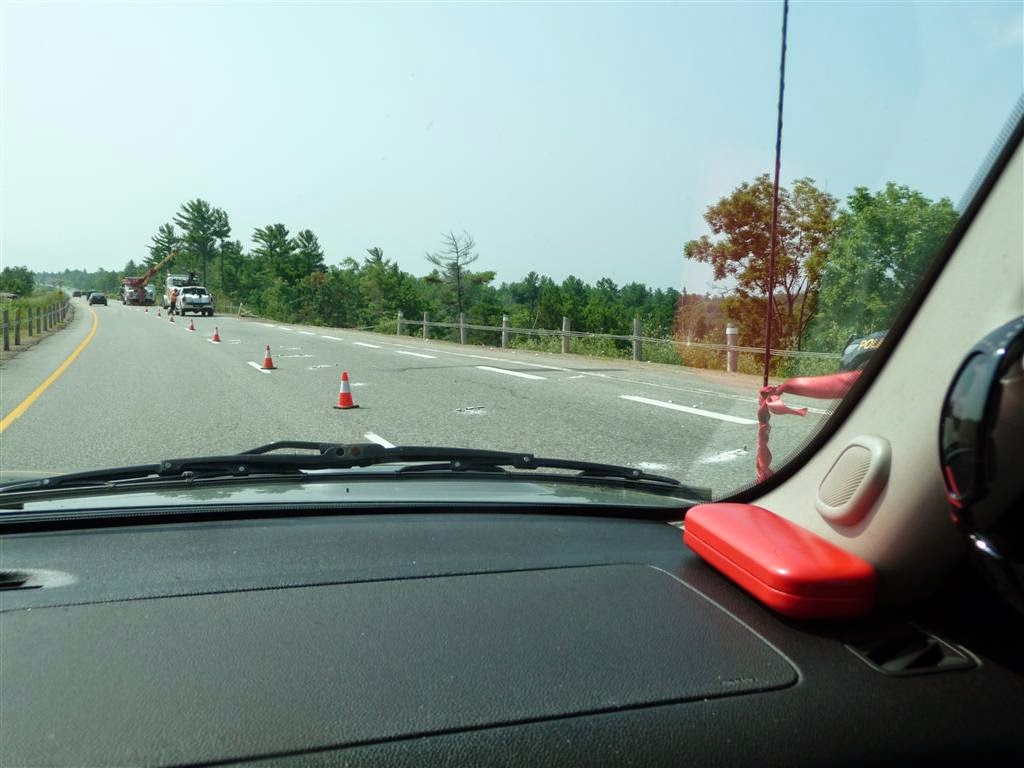 Something went off the road

We stopped at Derek Roberts Esso at Waubaushene for fuel,a bathroom break and a Subway sandwich to go. The highway near Mt. St. Louis was down to two lanes northbound and ONE LANE south bound. I can't imagine what this will look like on Monday as all the city folks try to get back home after the long weekend. Then it was on to Barrie, where all three lanes on the northbound side of Highway 400 were jammed with cars. It was barely noon. 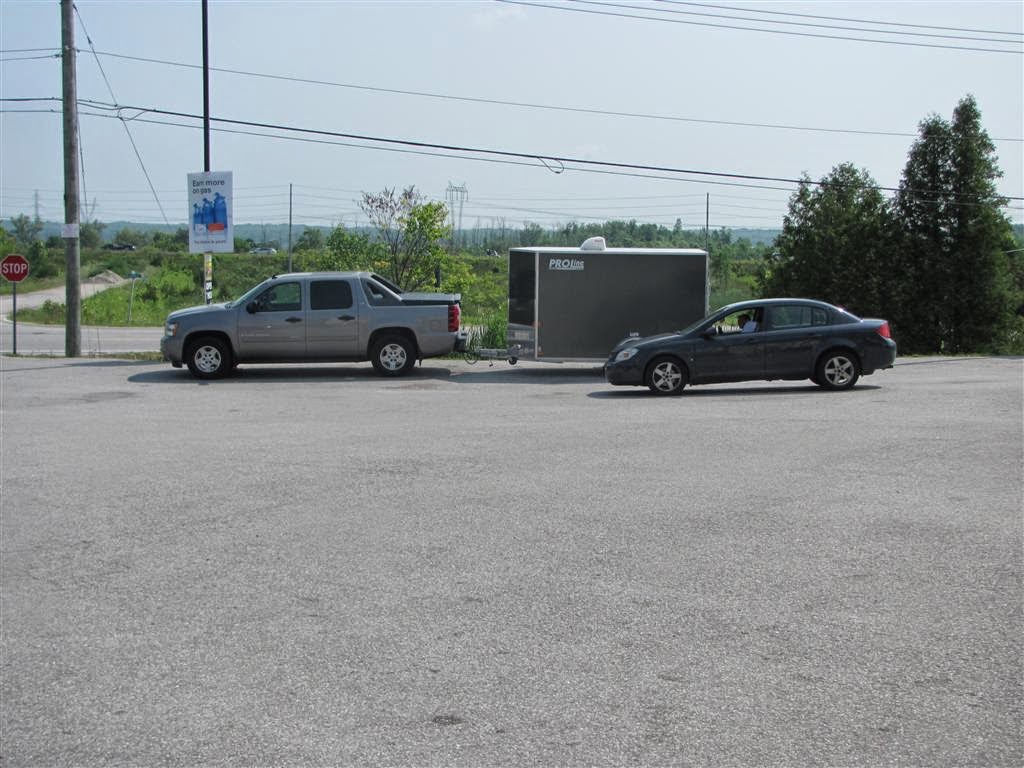 Nice truck and trailer at Roberts in Waubaushene 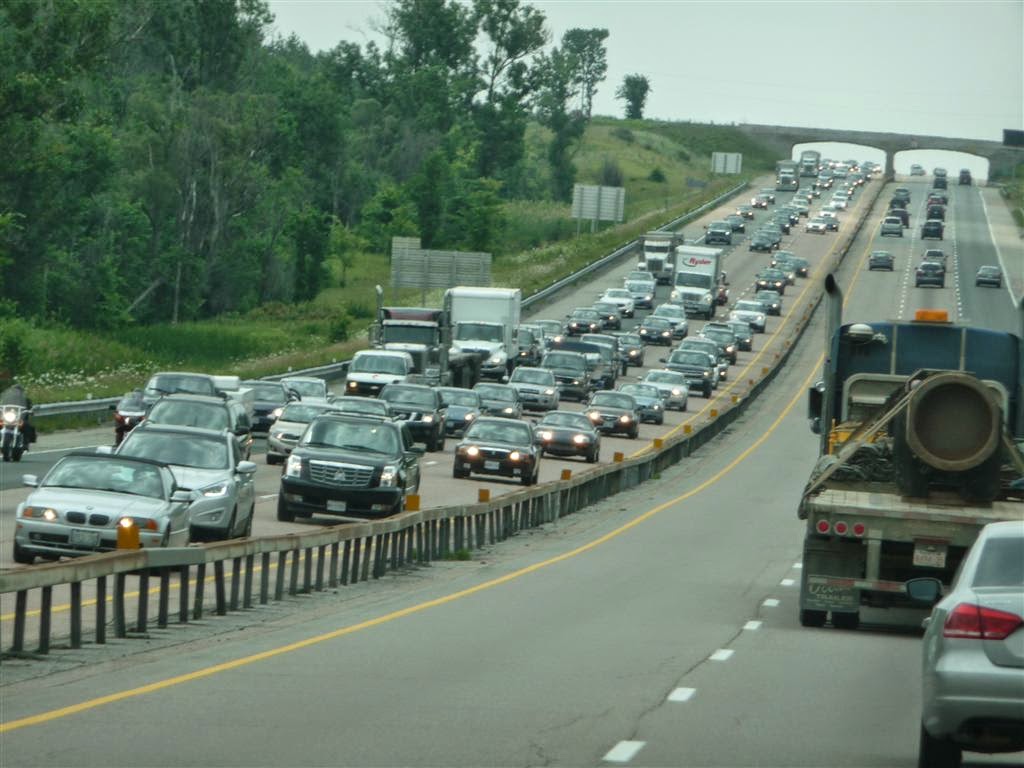 The $20 to take the ETR 4007 toll road to Burlington suddenly looked like a good deal. We drove right along with minimal traffic. Sometimes even outrageous prices can be reasonable.

As we approached the Burlington Skyway, the effects of the dump truck fiasco were evident. Niagara bound traffic was backed up while the Toronto bound side was empty. The TO traffic was being detoured to street level and over a smaller lift bridge. Our side was backed up simply due to rubberneckers. Once we cleared the damaged area (where the truck was still in place), traffic started flowing normally. On this side of the bridge, the other side was dead stopped for several miles waiting to funnel through the lift bridge. One drunk driver can sure screw up a long weekend. 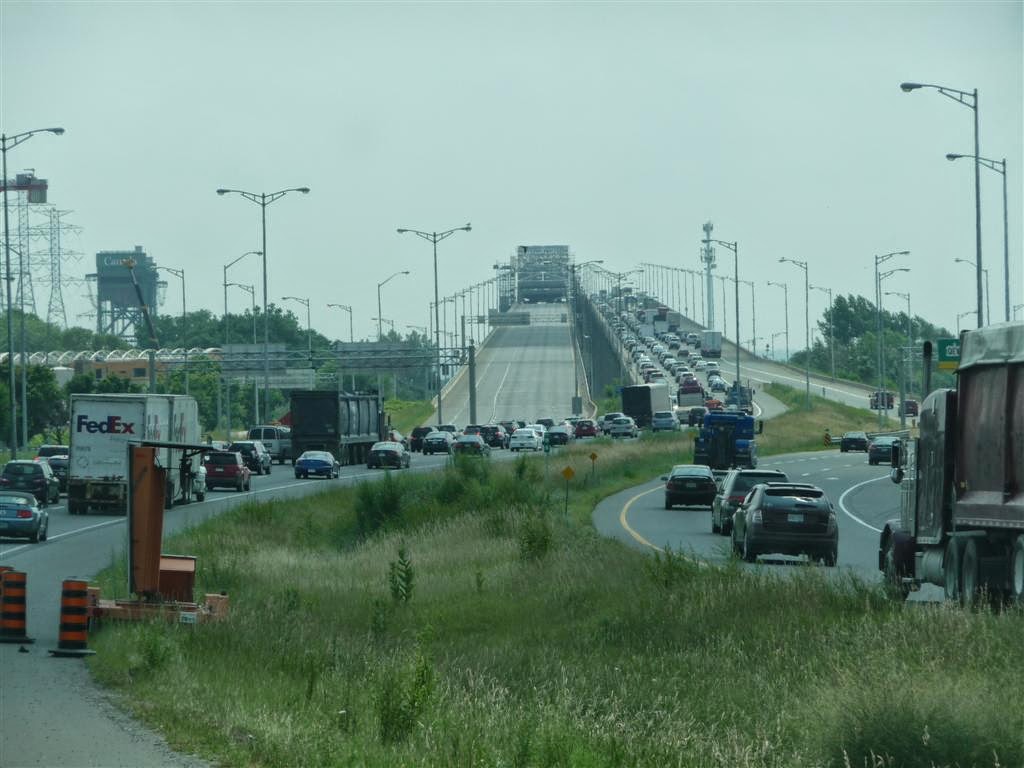 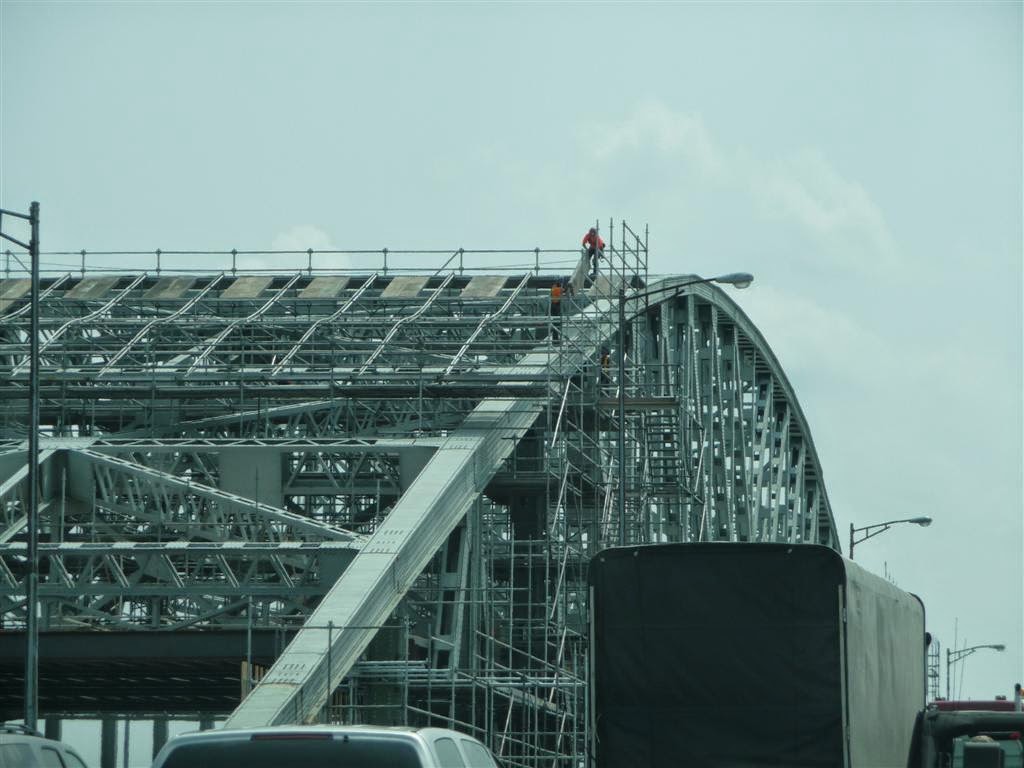 Workers on the Skyway 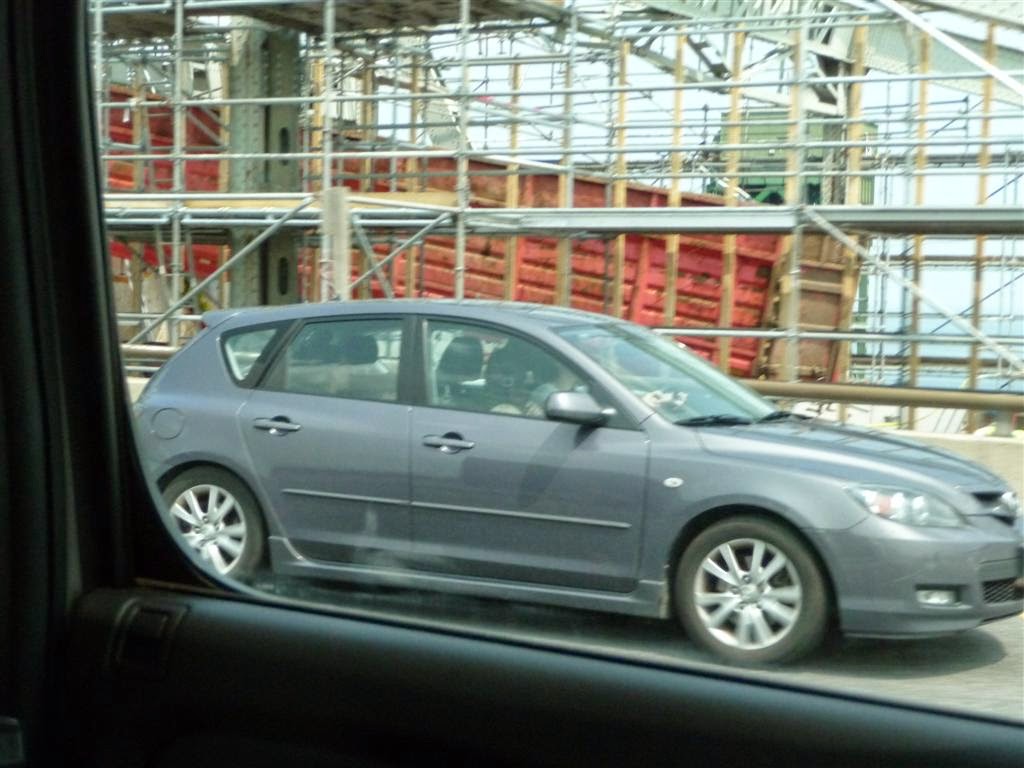 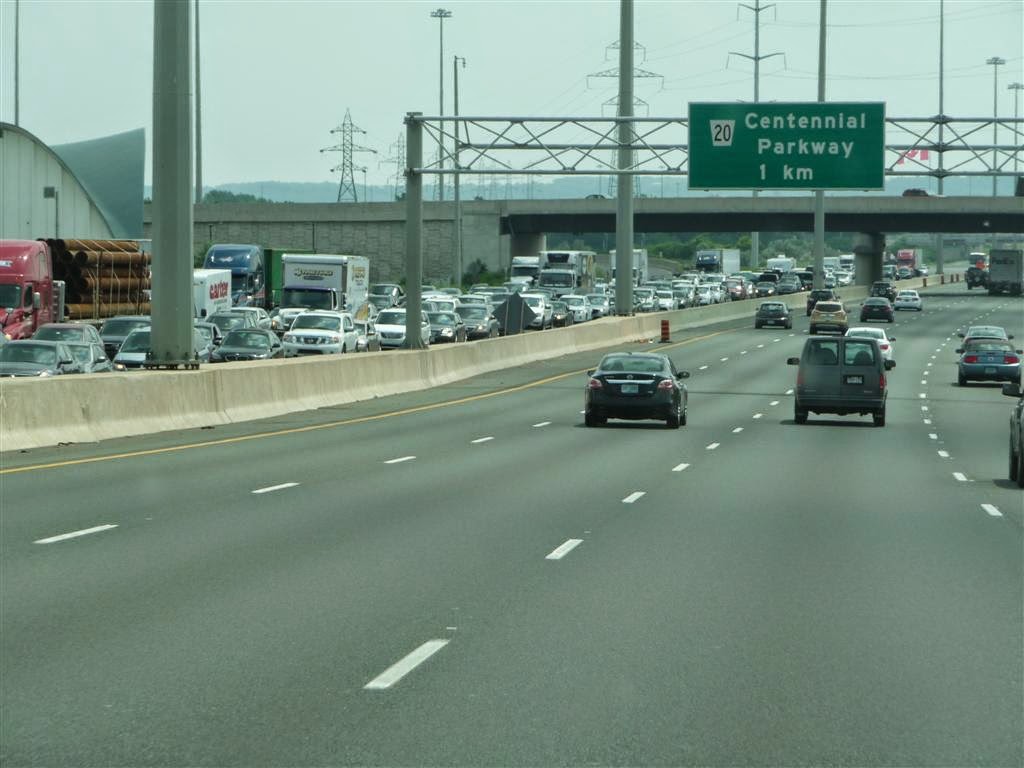 The rest of the drive to the border was uneventful. There was a portable sign saying that the wait at the Peace Bridge at Fort Erie was one to two hours while the Lewiston crossing was 30-60 minutes. This made me decide to go to Fort Erie. Whenever they put these signs up, people all go the other way. 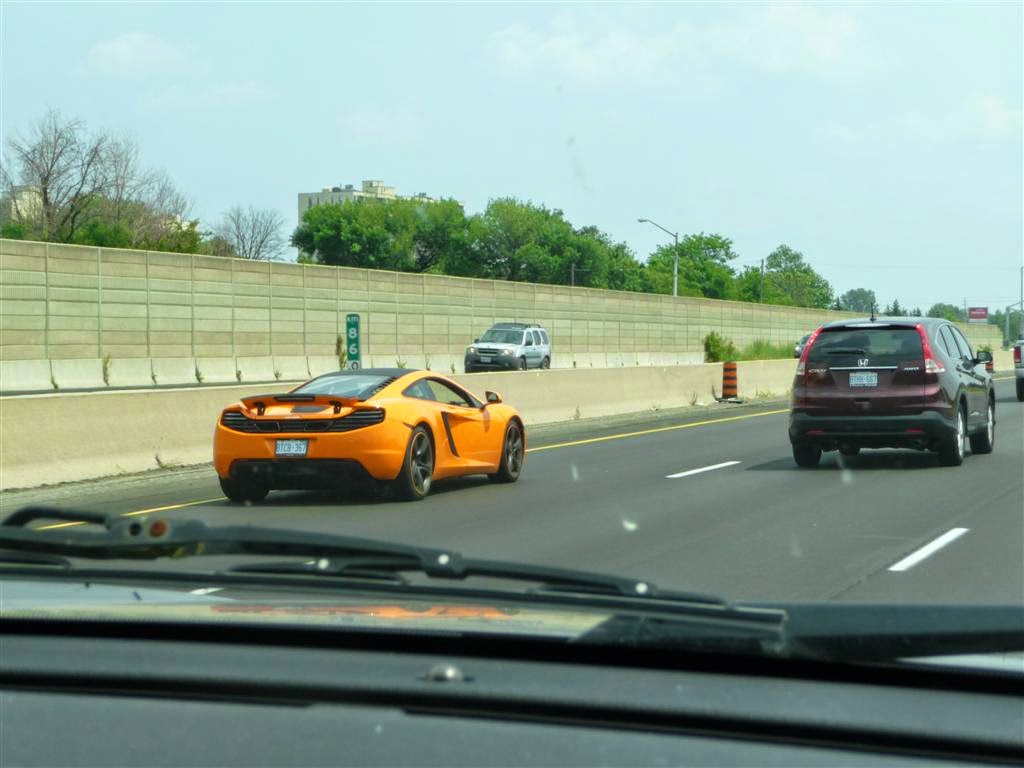 Don't know what this was but I like it 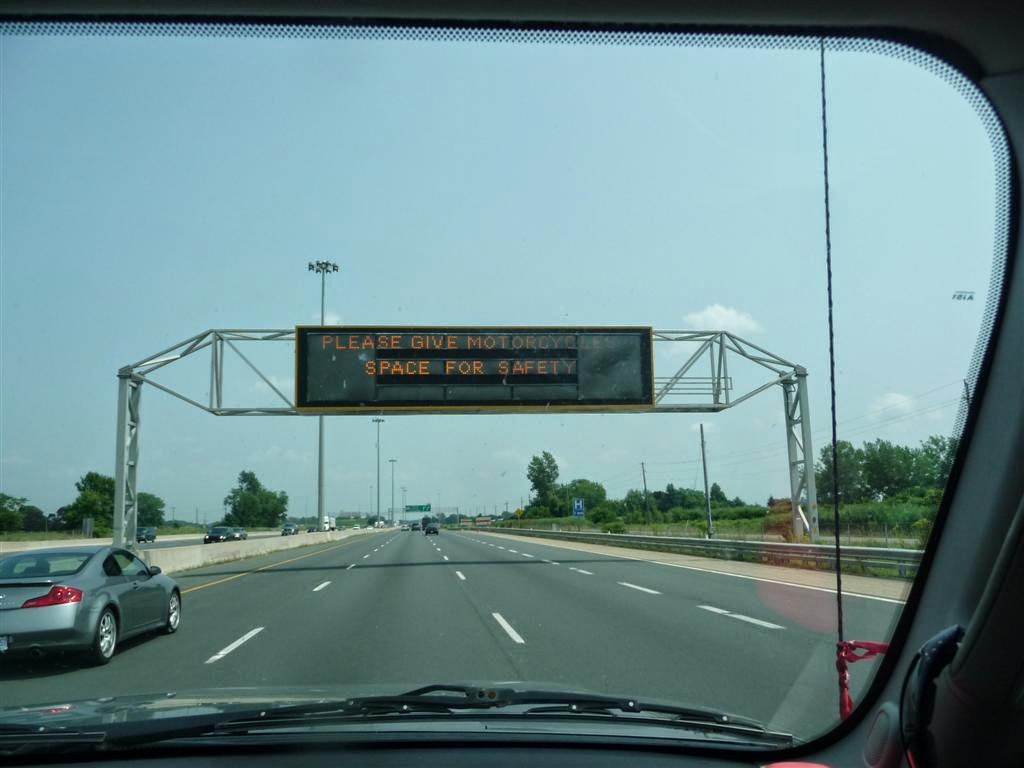 It isn't even Motorcycle Safety Month 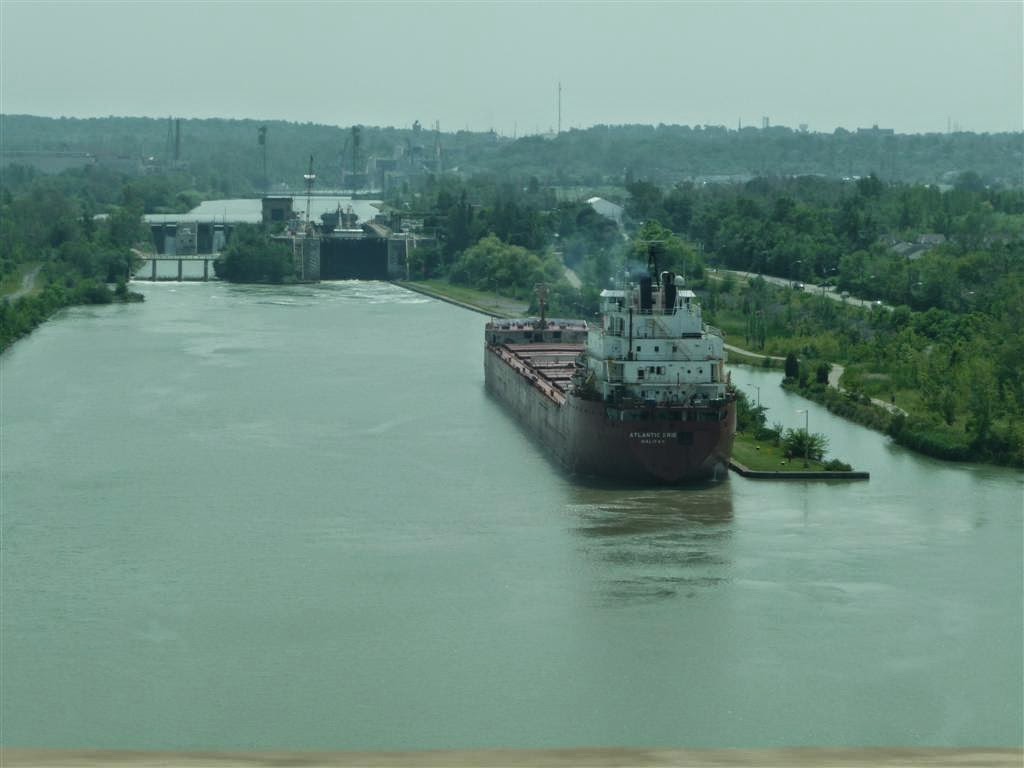 Arriving in Fort Erie, we stopped at the McDonald's once I found it. I had gotten off one exit too soon. Sandy got a blueberry/pomegranate smoothie and I picked up a coffee. Then I changed the voice messages on both Canadian phones to indicate our US number and swapped credit cards. Finally, we approached the bride (after diverting because the usual on ramp was closed for construction).

Traffic was backed up to the Canadian side. They had two lanes open coming towards us and only one in the direction we were going. However, they we directing traffic to facilitate the merging of several lines of cars and they were holding the big trucks up. Once we got onto the bridge, we moved faster than I would have thought.

The US side had every booth open. I couldn't take the NEXUS line because of the hard time the agent at that end gave me last time due to the trailer. Instead, I pulled to the right to the line that said Cars/Buses/RV's. There is usually one lane but they had switched three more commercial booths over, so we had four to choose from. The new NEXUS card activation must have worked because, after a look in the trailer, we were on our way. Total elapsed time from beginning to end was 23 minutes. 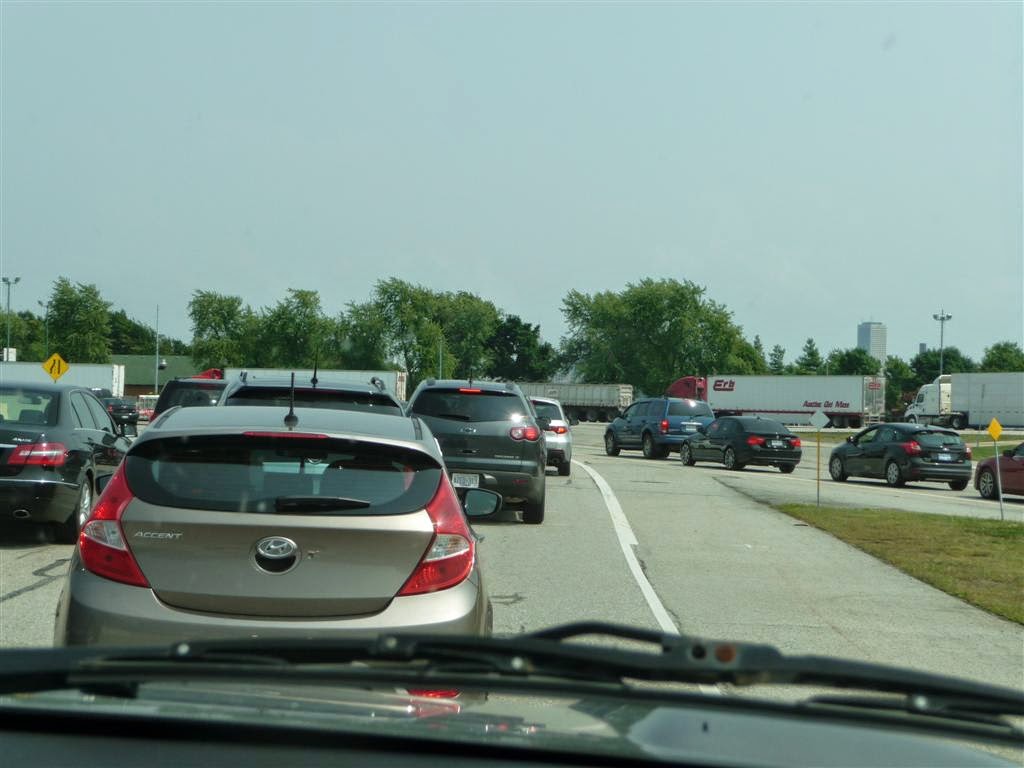 Lined up on the Canadian side 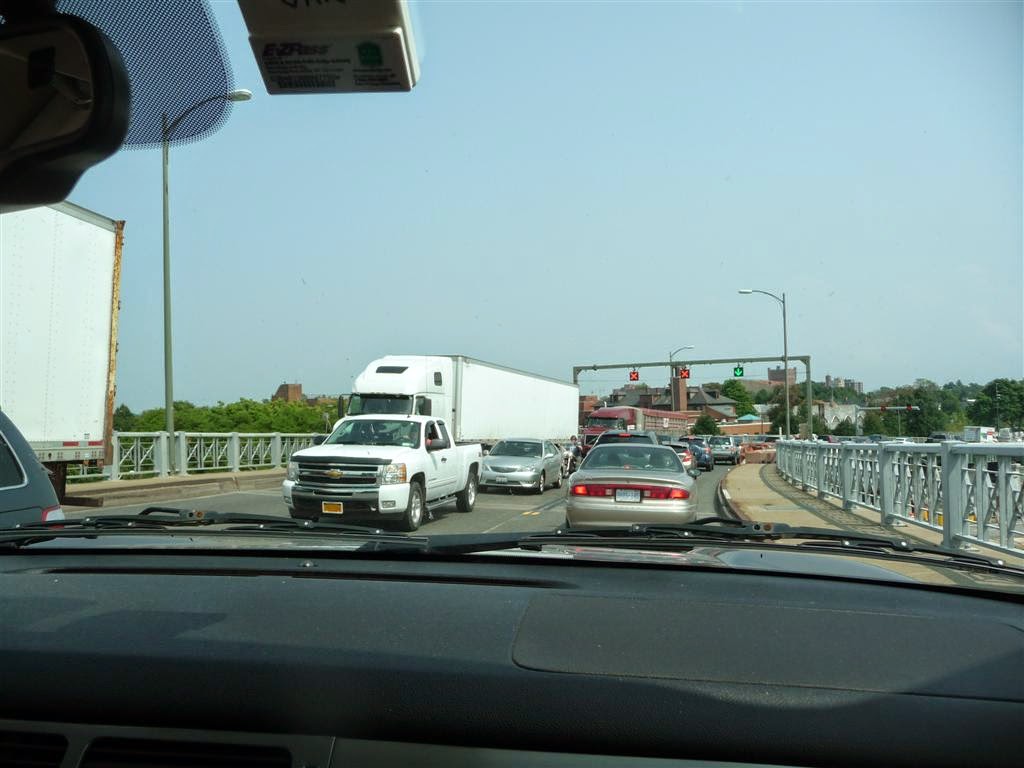 Starting across the Peace Bridge 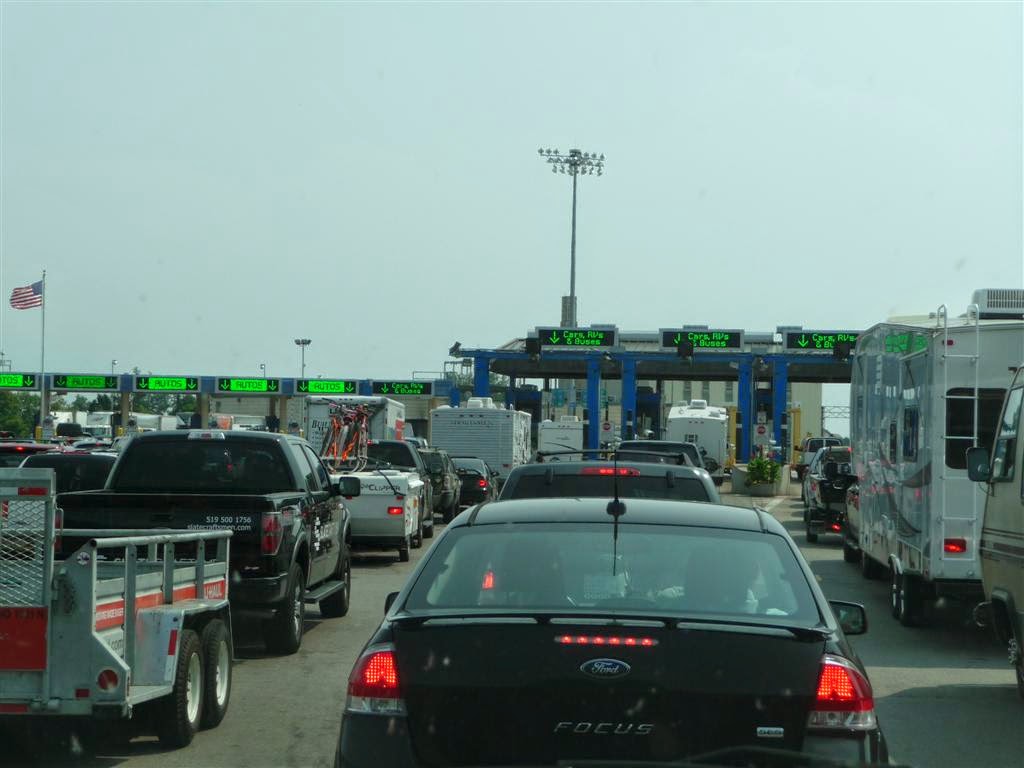 Traffic was busy getting to the NY Thruway but most of them exited before we got to the toll booths. Despite our EZPass transponder, we have to go through the regular lane due to the trailer. The attendant has to set the category manually, although the transponder takes care of the toll. NEXUS, EZPass, look at the express lanes I can't use because I am towing.

Signs on the Thruway indicated there would be more aggressive enforcement  of traffic laws from today through the 4th. This is of little consequence because, with the trailer, I don't travel more than the 65 MPH speed limit anyway. There was a one mile lineup at the booth as we approached the Pennsylvania state line, but it moved along fairly quickly. 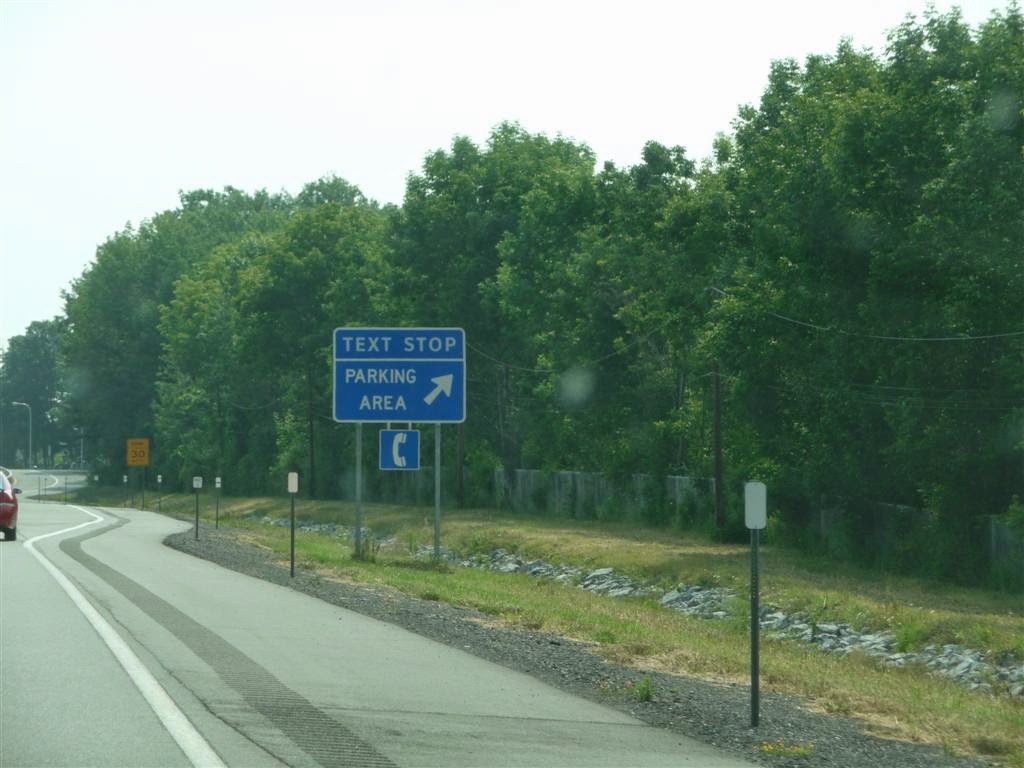 We stopped at the quaint community of State Line, Pennsylvania. The Kwik Fill was too congested, so I went to the Shell that used to be a BP and paid more but got out quickly and undamaged. Then we stopped at McDonald's and got some food to go.

Continuing west, we passed through Erie and caught the exit to I-79 South. An hour later, we pulled into the Super 8 in Grove City. It was 6:40 PM and had taken us less then ten hours to go 501 miles. Not bad. It was good thing I reserved because the place was full up, even though most hadn't arrived yet. An L-shaped motel has pie shaped rooms at the bend. This was ours. It could have handled four more king beds. Or maybe just some furniture. 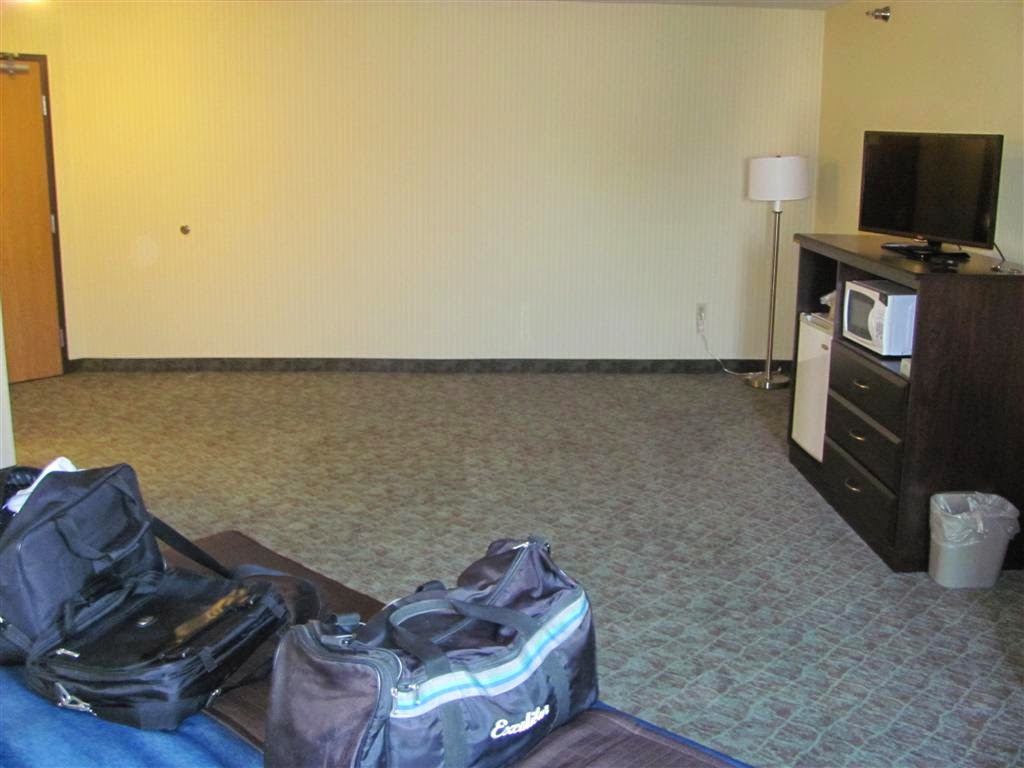 The room was on the large size

The pool was open but we decided to skip it. I worked on the photos and blog while Sandy watched some TV. Then we turned in. 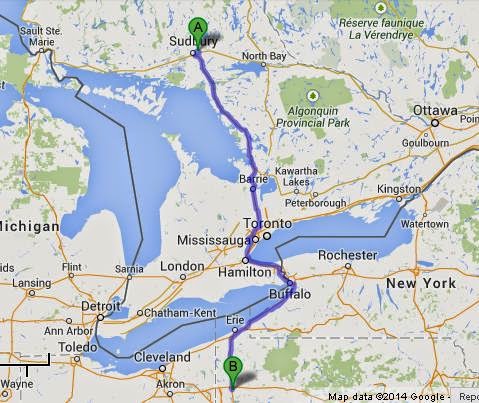