It was our last day of the trip and I was in no hurry to get going. One problem with delaying getting to the motel breakfast was that most people think that 8:00 AM is a good time to eat. The nook was crowded, but we managed to get a table. Sandy had cereal and yogurt while I had cereal and brown toast.

I got the knives we had received from Southern Draw out of the luggage in case Customs wanted to inspect them and then we were on the road by 8:30. We crossed into New York and got on the Thruway for the sixty miles to Buffalo and the border with crosswinds from the south tugging at the trailer.

We didn't make it straight to Buffalo on the Thruway. The State Police had the highway blocked at one exit and we were forced to get off. We didn't find the reason but there was a plume of black smoke off in the distance so I assume it was some kind of wreck. The traffic was jammed as we negotiated a traffic light at a one lane overpass due to construction, and then had to line up at the toll booth. The E-ZPass paid off as the transponder only lane was fairly clear.

Following Highway 20, we stopped for fuel before returning to the Thruway at the next interchange. As I approached the toll booth, I noted a loud squeak from the left front wheel area. It abated when I dragged the brake so I put it down to some trash stuck in the caliper and decided to keep going but monitor it. 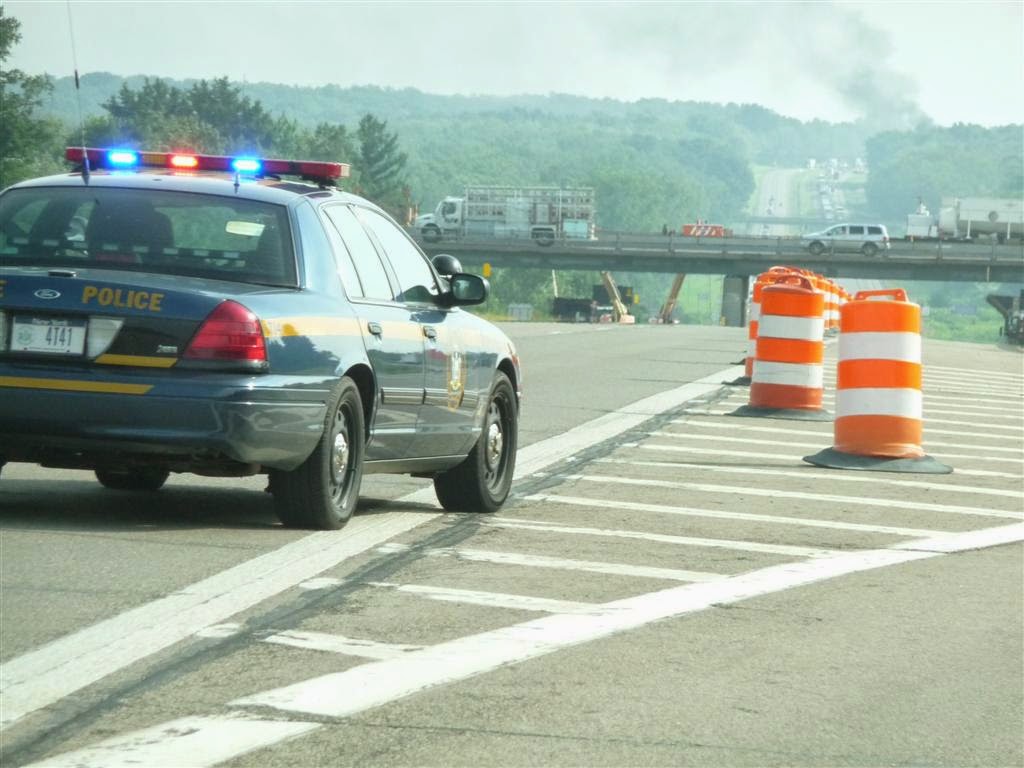 The Thruway was closed

Back on the big road, we went through the final toll booth and took I-190 to the Peace Bridge. The US side had two lanes open and was backed up to the Canadian side. Again we were lucky because almost no one was going to Canada this morning and we were on Canadian soil by 10:45. There were lineups of about four cars at each Customs booth. I couldn't tell if the NEXUS lane was open until I saw a car use it and then I slipped between the pylons into that lane and approached the booth. One card failed to scan so the agent did it for me and then, after one easy question about purchases, welcomed us home. The wheel was still squeaking. 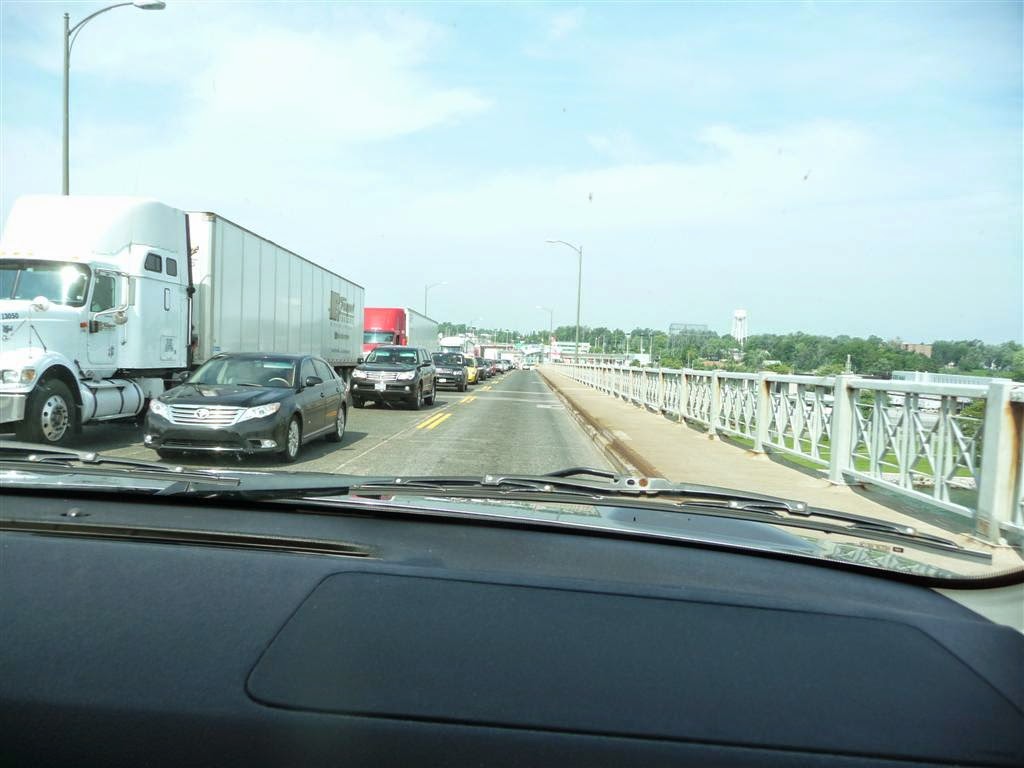 US bound traffic on the Peace Bridge

The QEW (Queen Elizabeth Way) was busy on the Niagara bound side but we had an easy go. Sandy got a picture of the shipwreck at Jordan Station. we pass this all the time and  I have always wondered what the story behind it was. I was able to find this via Google. You would think something this prominent would be better known. 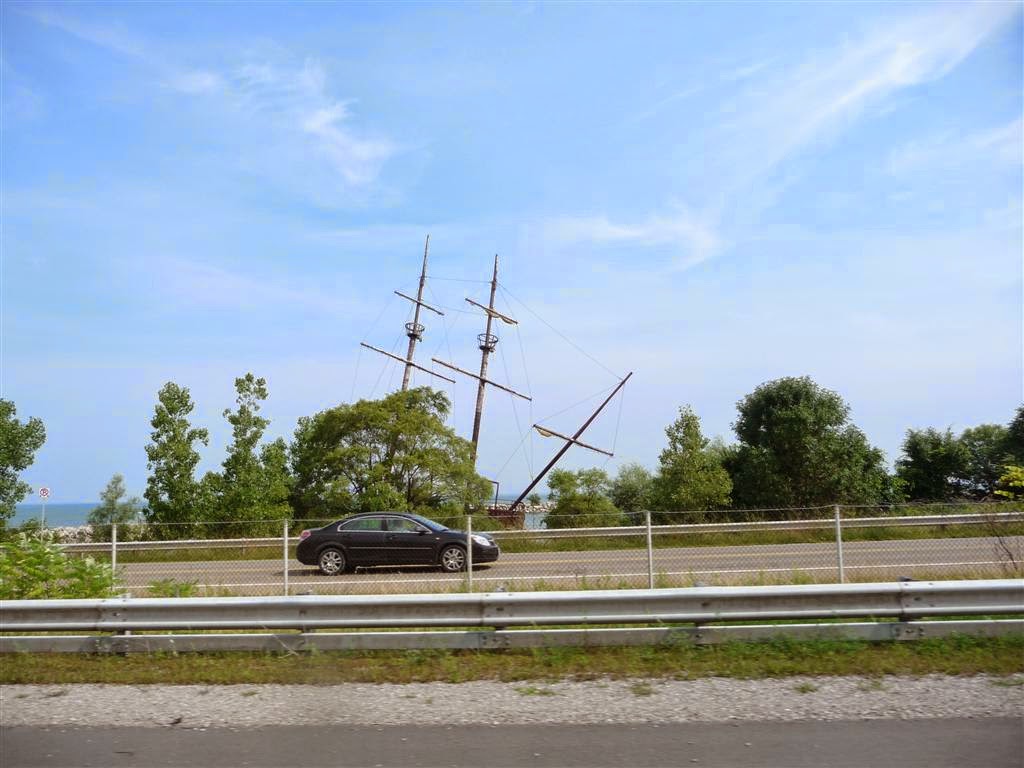 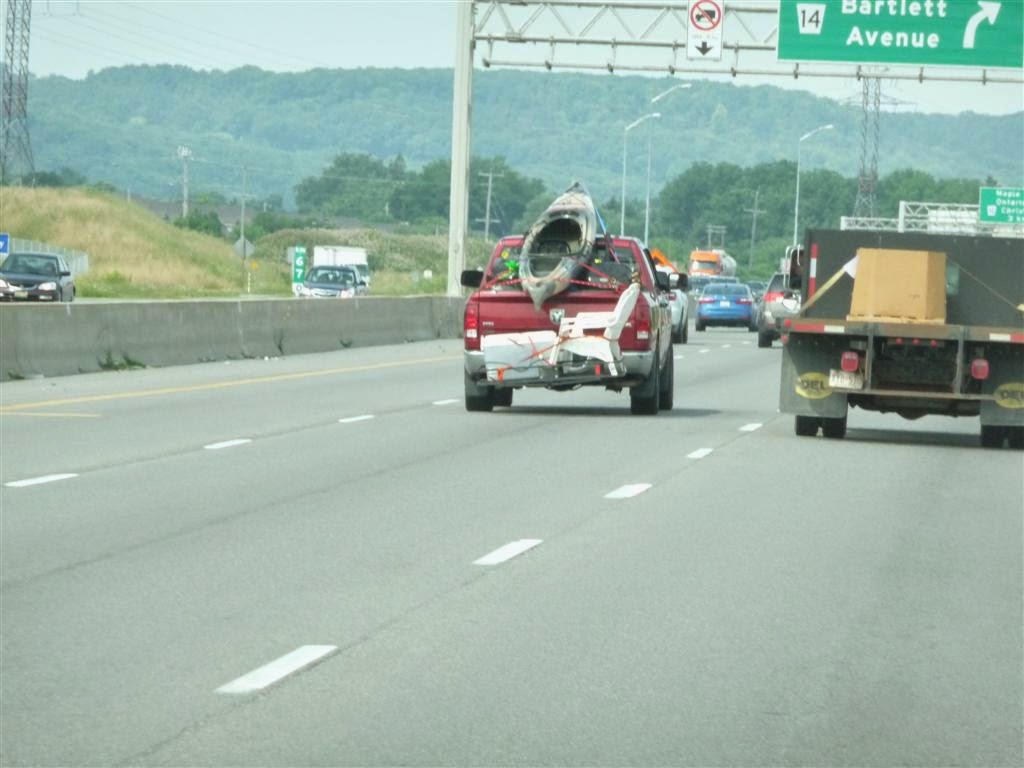 How hard is it for someone merging onto a freeway to come up the ramp, accelerate to match speed and then slip into a gap? I guess the lady who triggered this thought by trying to merge at a much lower speed and then accelerating to Warp 9 would have done better if she hadn't simultaneously been applying makeup.

I noted flashing height limit warnings when we started up the Burlington Skyway. Then I noted height warnings on each lane of the superstructure. Of course, none of it matters if someone leaves the box on their extended dump truck up. The guy must have been drunk. Oh yes, it looks like he was. 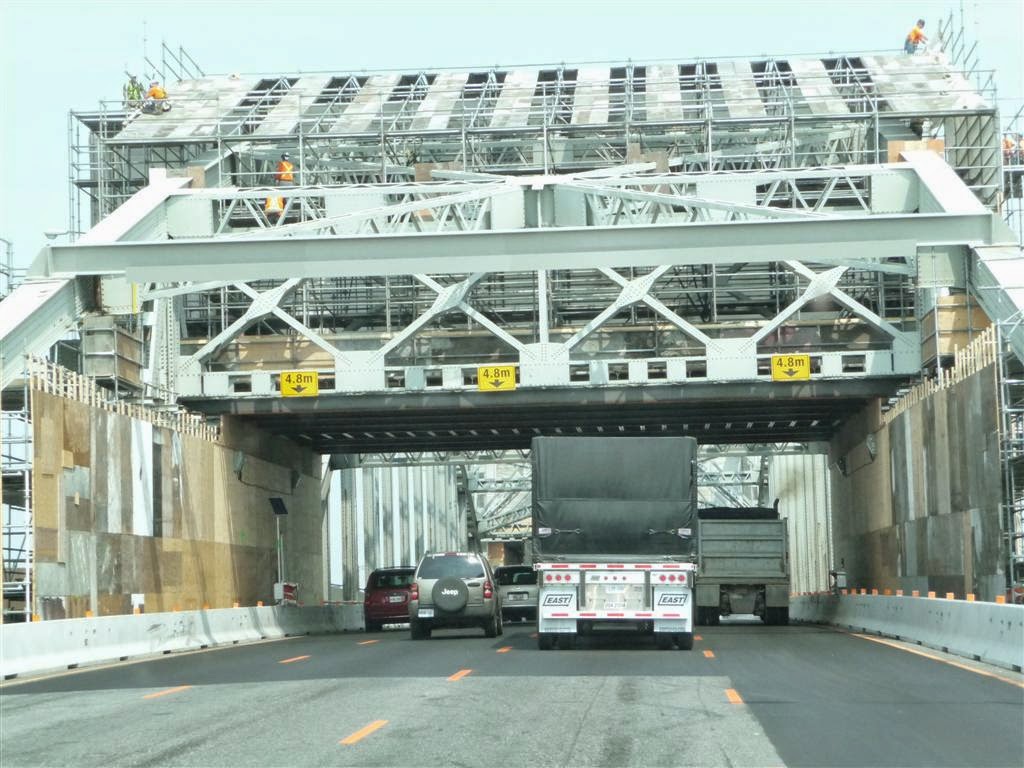 Warnings on the Burlington Skyway

We drove on across Toronto on the ETR407 and caught Highway 400 northbound, stopping for fuel and food at the new Service Centre at King. There, we found that the brain trust at MTO had not allowed enough parking for more than a few trucks. It was jammed so we skipped on to the other new Centre in Barrie, where there was more room. After getting food to go at Tim's, I topped up the tank (I hate Canadian fuel prices) and we rolled on.

North of Barrie, the 400 is down to one side of the highway. When we were going south, there were two lanes northbound and one southbound separated by a concrete barricade. Now, there were two lanes southbound. This barricade goes for quite a few miles but is segmented and I believe I saw video about how a mobile unit can relocate it relatively quickly. Do they do that every weekend to accommodate traffic flow?

Traffic was light to Parry Sound. To our horror, we saw a few trees already trying to change colour. Damn, where has the summer gone? 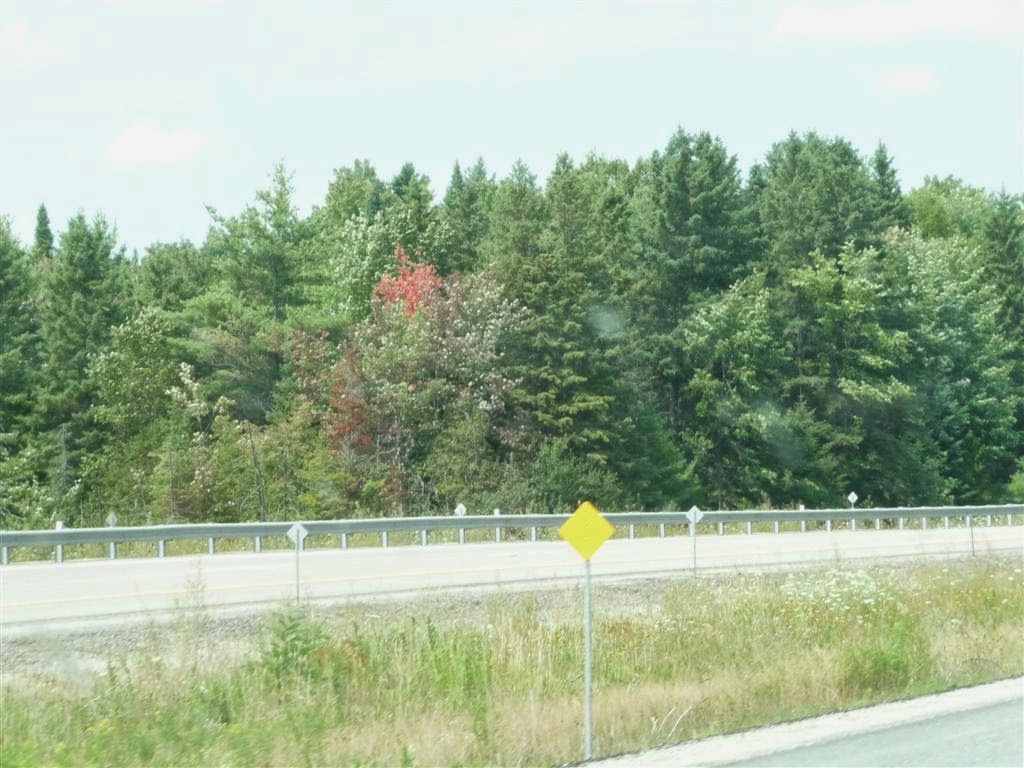 A splash of orange foliage

We stopped at the French River Trading Post forty miles south of Sudbury for a bathroom break. There was a prominent sign saying the washrooms were only for paying customers and directing the public to the Visitor Centre one mile south. I don't remember this from before but I bought a coffee to go after using the facilities just to stay honest. 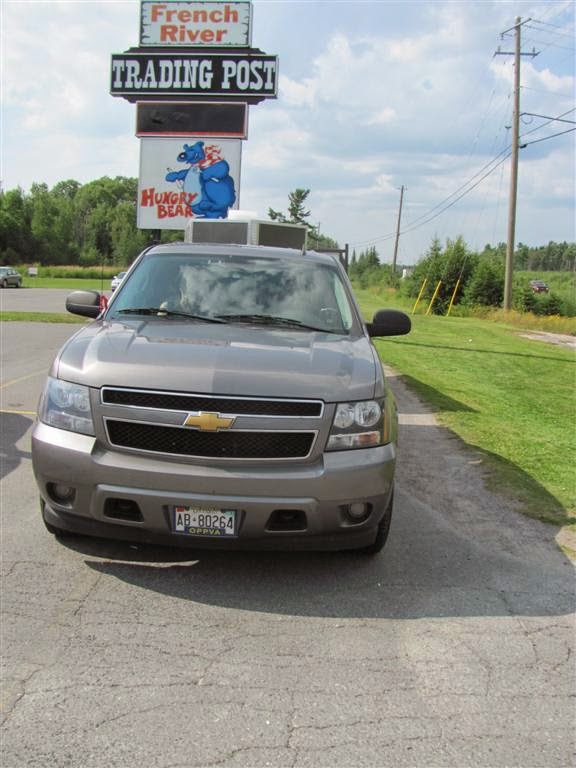 As we approached Sudbury, the clouds started to build as usual. At MR 55 and Highway 17, we saw a  two element oversize load with police escort getting ready to move. There is another thing I'm glad we didn't meet on the road. 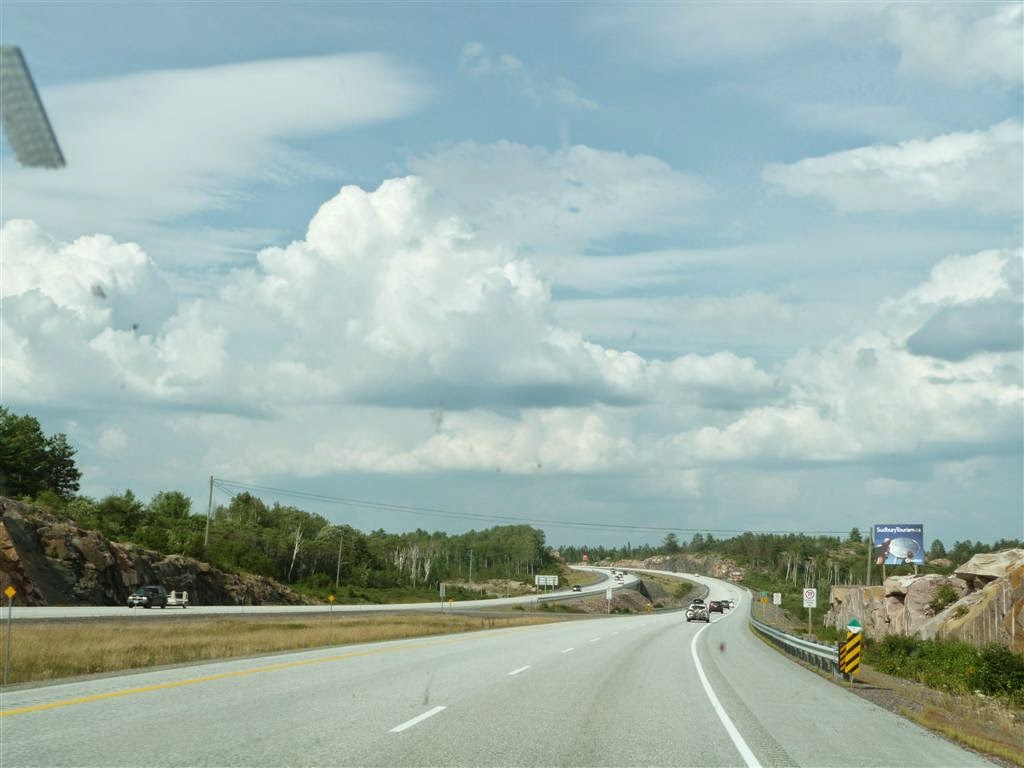 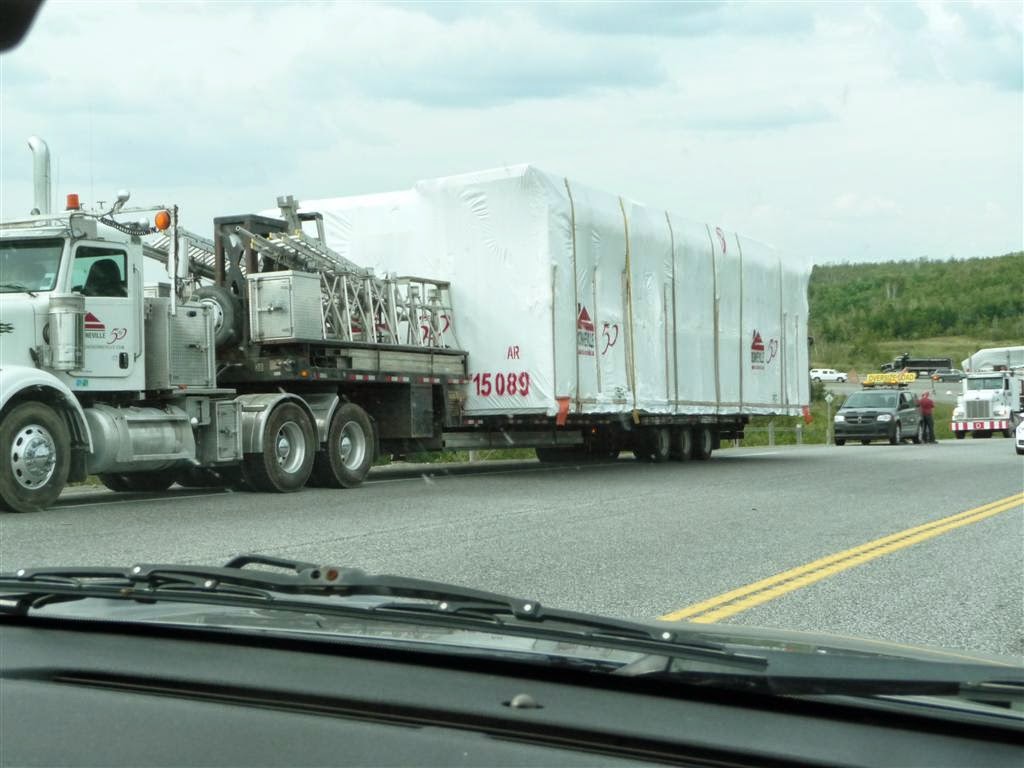 We pulled into the driveway at 5:00 PM and had the truck emptied, the bike unloaded and the trailer parked by 5:40. Then we mowed part of the lawn before knocking off for the evening. While I was mowing, our neighbor Jay stopped over to tell me that a black bear had been prowling our yards last night and showed no fear of humans. Good to know after dark.

It was another good trip. There have been too few this summer but we are looking forward to Arkansas in September. By the way, the truck wheel had stopped squeaking by the time we got home. 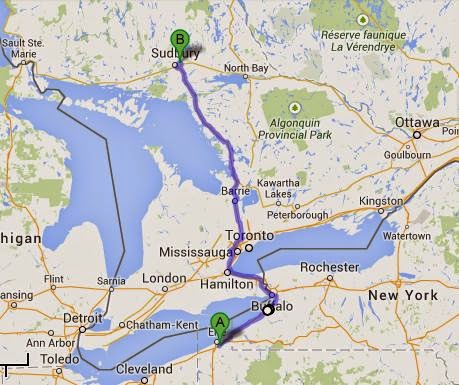 Thanx for the link to the Jordan ship, Skid. I've always wondered about it, too.