We were up at 6:00 AM packing the bags and dragging them down to the truck. We met Bill and Joan while we were having breakfast of Raisin Bran, toast (me) and yogurt (Sandy). Another couple joined us. They were in a car but were riders and had stayed at the Iron Horse in Berryville a number of years ago. After breakfast, we stopped by the fairgrounds for coffee with Willie and Carlene before hitting the road. It was great to be able to spend some time with them this weekend. We finally hit the road at about 8:20 under clear skies, although it was still cool at 12C.

I was faced with a minimum of four route options to Eureka Springs. I opted to go northwest to I-44 and take the slab to Springfield. We took back roads through Pinckneyville, Red Bud and Columbia before crossing the Mississippi on US 50 (the same highway that is billed as the Loneliest Road In America when it crosses Nevada). The drive through Illinois to the river was idyllic, with green fields, trees and very few towns. Sherm called while we were traveling. The GPS said we should arrive at 2:25 so I gave him an ETA of 4:00 to allow for stops along the way. 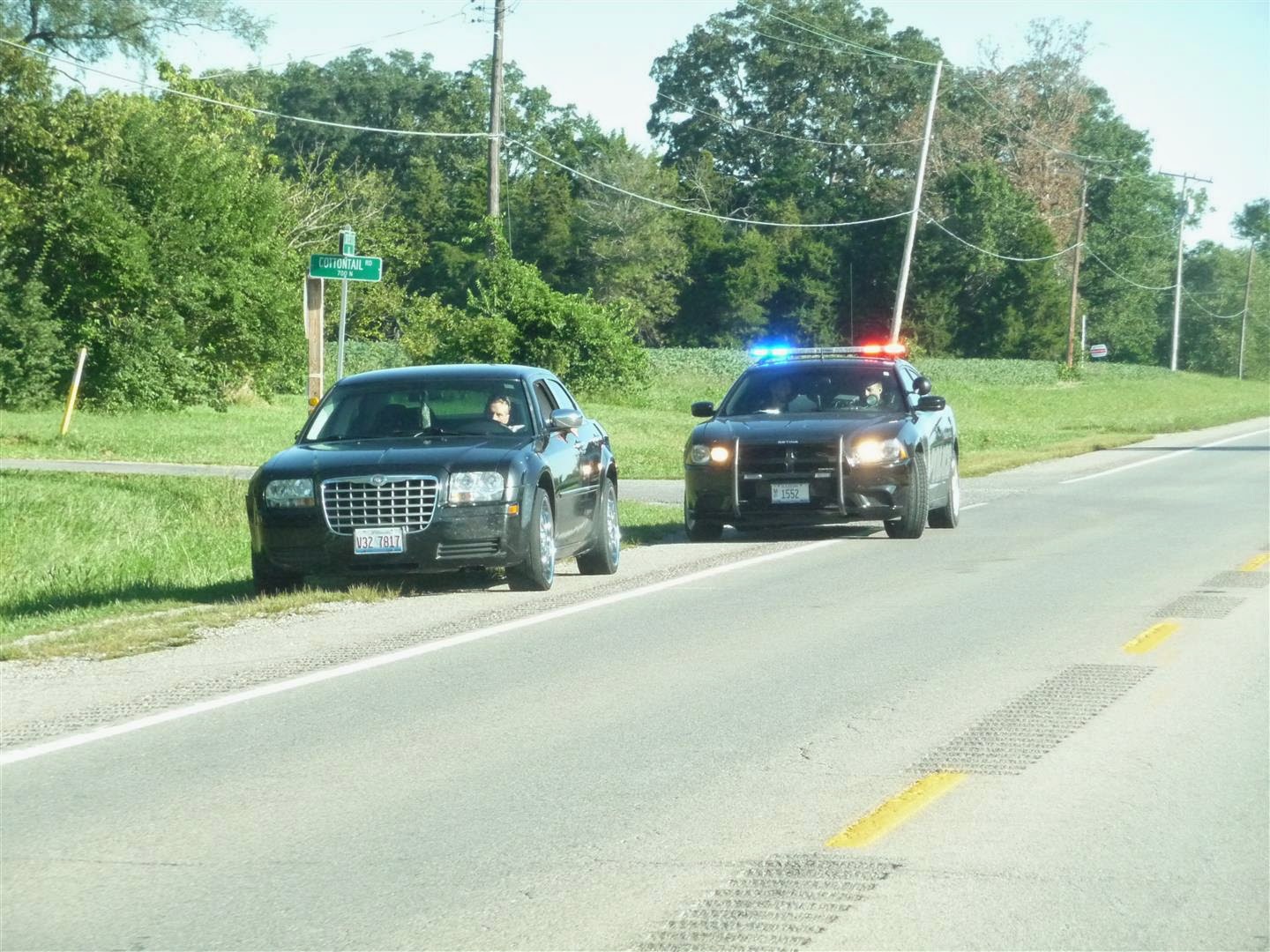 Someone was being bad in Pinckneyville 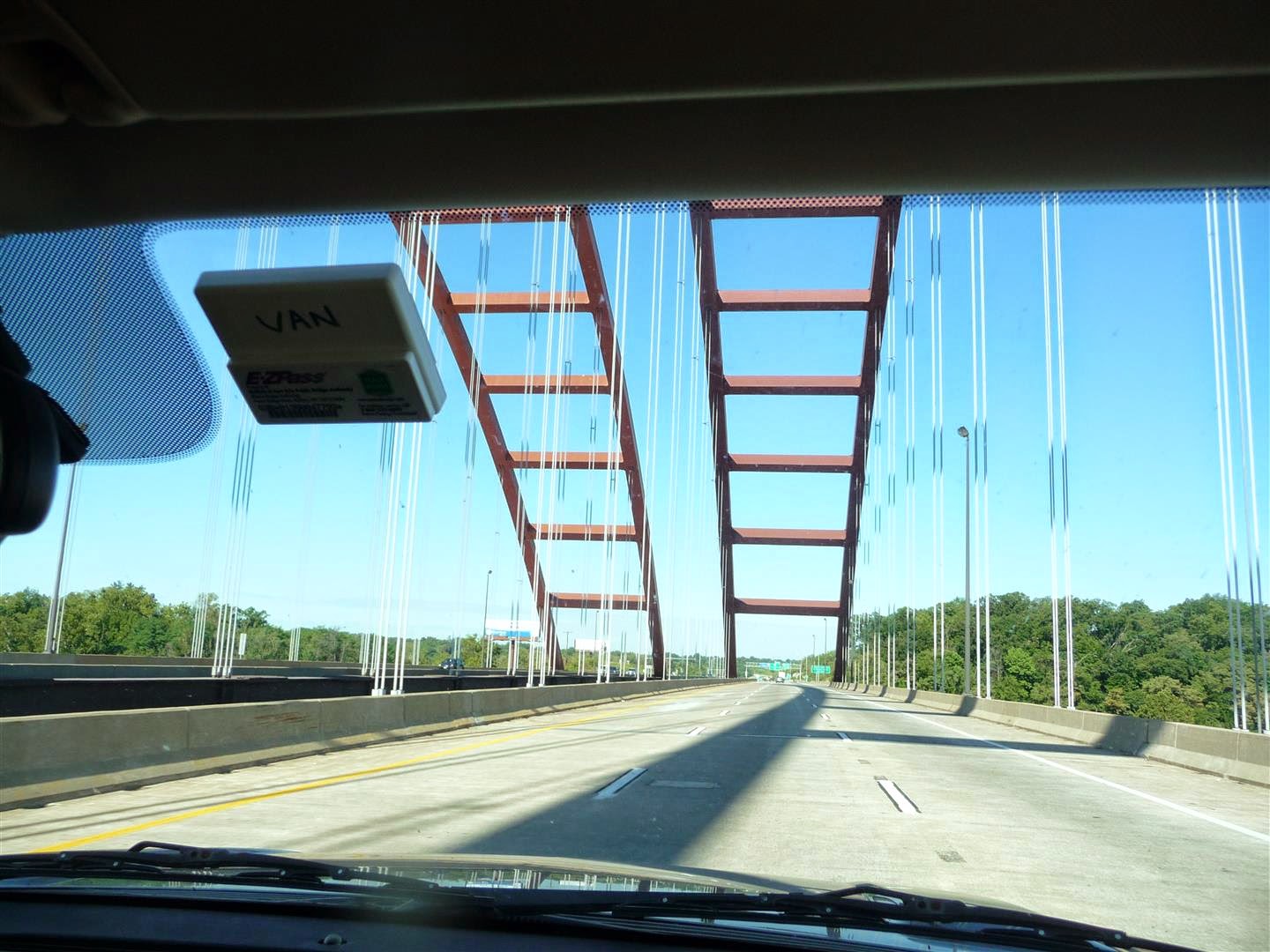 Crossing the Mississippi River on US 50

As soon as we got into Missouri, we stopped at a McDonald's so I could get another coffee. Sandy opted for her usual Blueberry/Pomegranate Smoothie, although the smoothie machine had some difficulties. In the end, they got it sorted out. When I checked the bike, both tie-downs on the left side had come undone and the right mirror was folded back from touching the door. I redid the straps and we moved on to I-44. 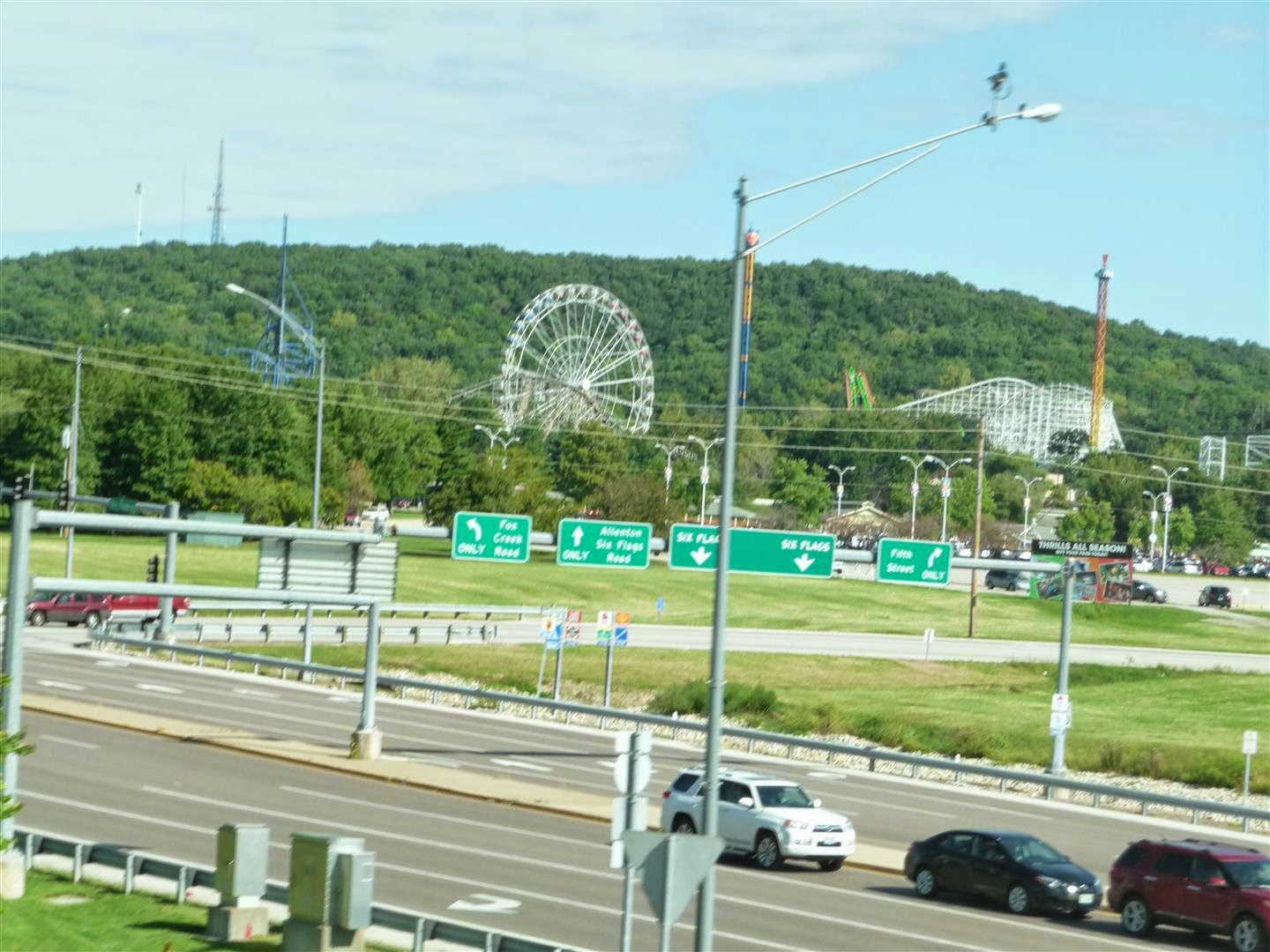 The hills are brutal on I-44. This section is straight but the grades are severe and following a big truck to save fuel doesn't work because they slow way down as they are climbing. I just put the truck in 3rd gear at 65 MPH and ignored the mileage readout. Although the truck was guzzling gas, it seemed happy.

I dialed up the NASCAR Channel on the satellite radio. The Sprint Cup drivers would be competing at Chicagoland today in the first race of the newly designed Chase. Last week, I slipped out of the first place spot in the VROC NASCAR Fantasy League so this race was important to me as I was trying to put Nomad Daddy back behind me.

We stopped at a Love's truck stop to get more fuel and check the oil. I also got Sandy a 12V to USB charger so that she could recharge her Kindle battery. This will be useful for many other things. I dug out a Meal-Mate ham and cheese package for lunch while Sandy picked up a cup of veggies and dip. Better for us than McDonald's.

Past Rolla, the highway continued to go up and down but started to curve as well. About thirty miles shy of Springfield, we stopped at another rest area for a bathroom break. This was a new spot and was laid out as a tribute to old Route 66, which had gone right through here before the Interstate System. I took a picture for Sherm, who is a big fan of the Mother Road. 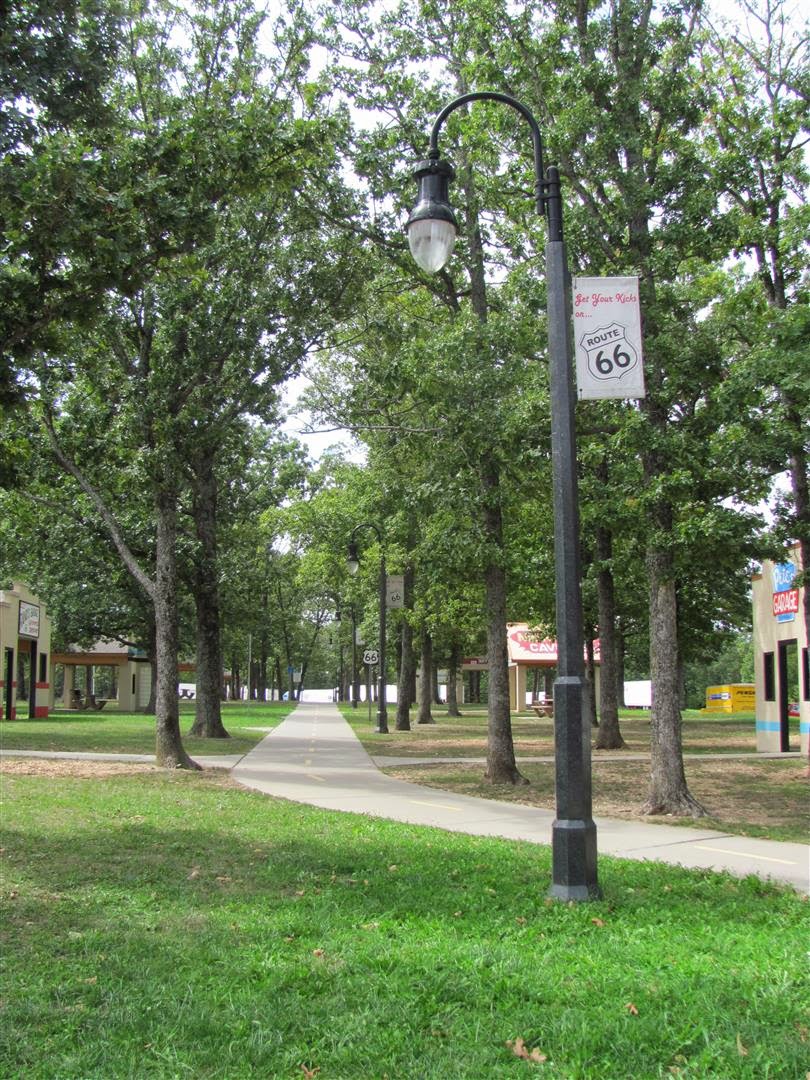 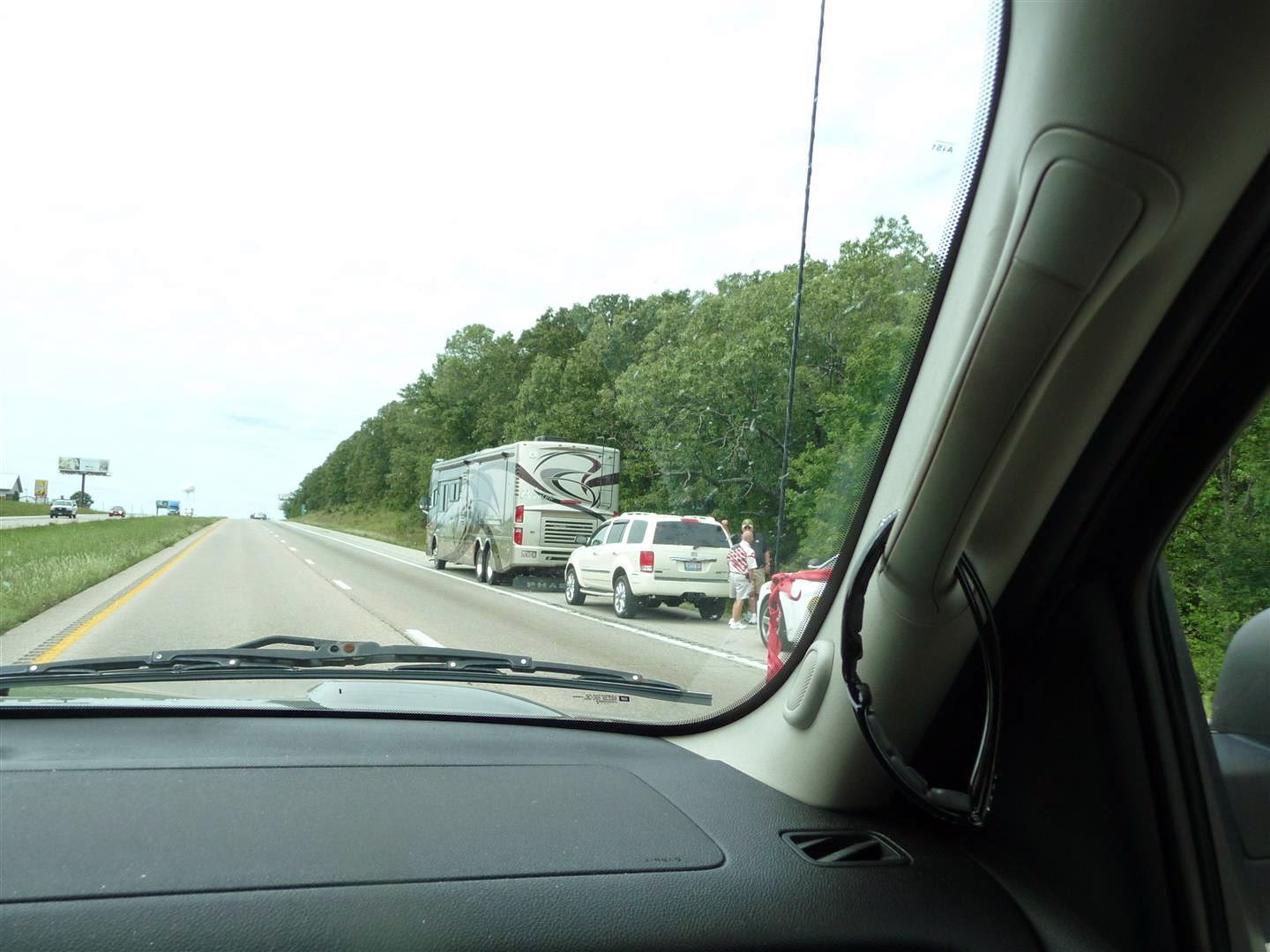 Pulled over by the police 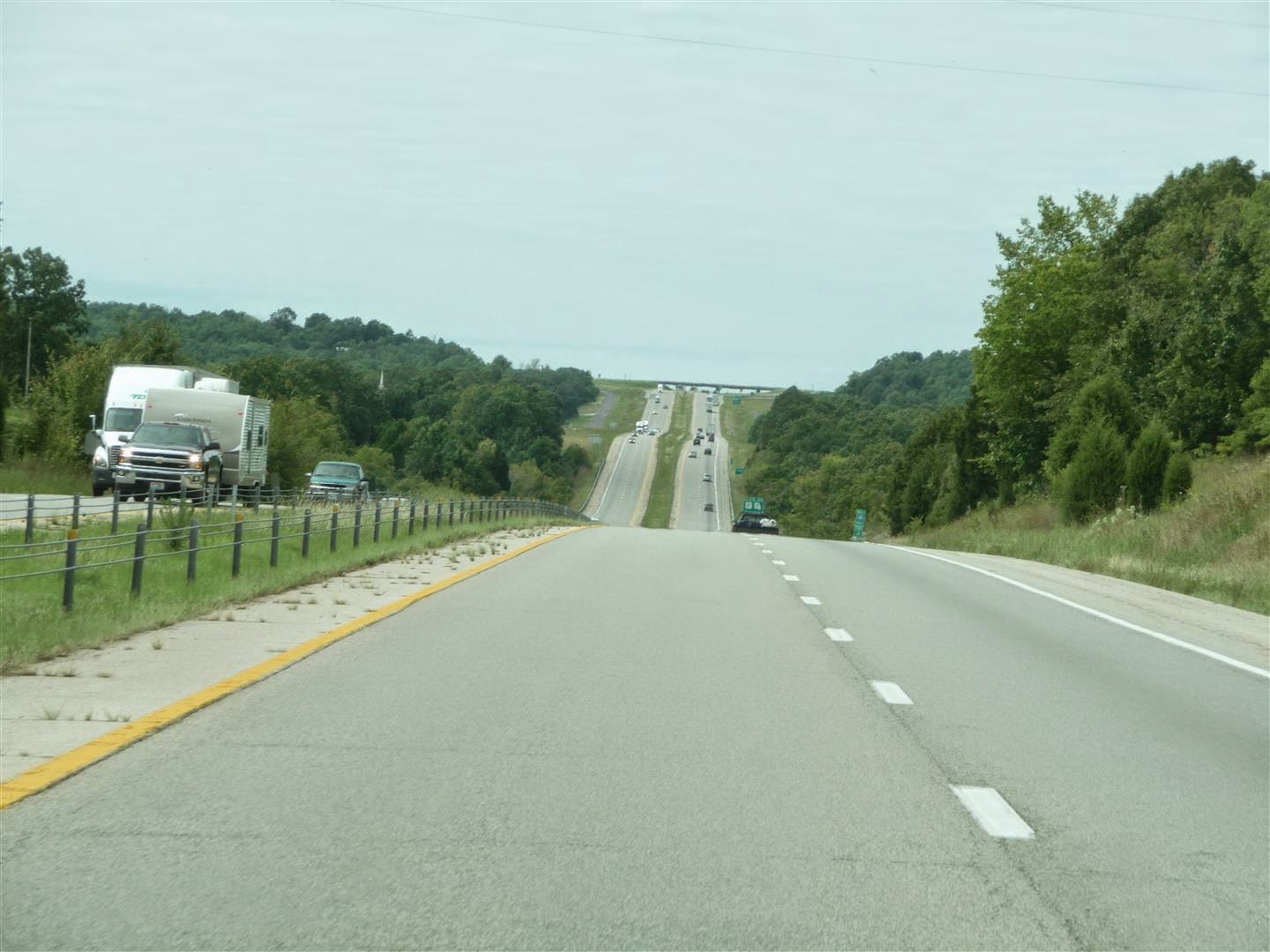 The last 30 miles to Springfield was choked with big trucks trying to pass each other. On these grades, a pass could take five miles and the traffic was building up behind them. I saw gas advertised at $2.98 as we approached US 65, the lowest I have seen in a long time. We turned south on 65 into a headwind and down a highway whose hills make I-44 seem tame. 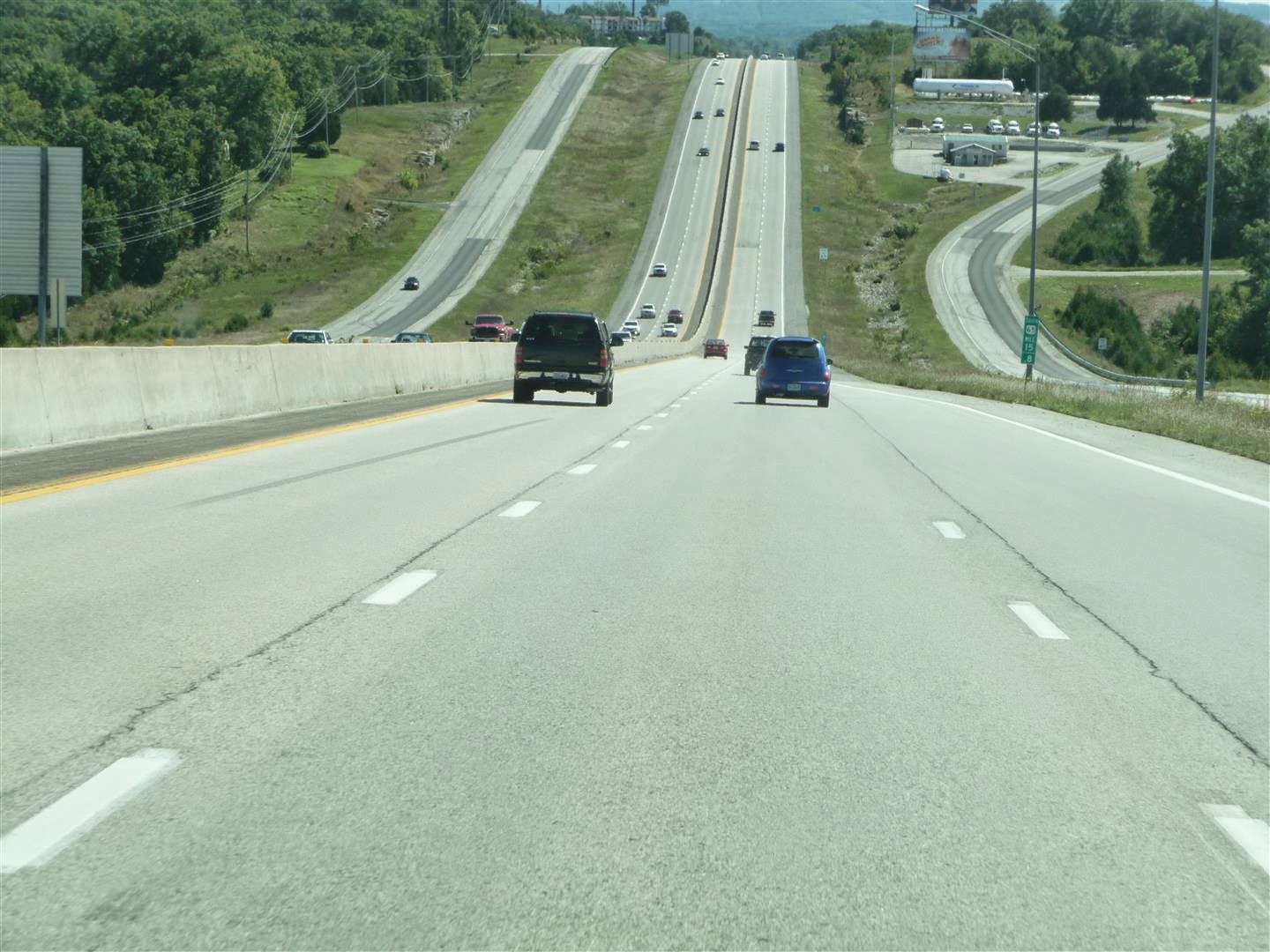 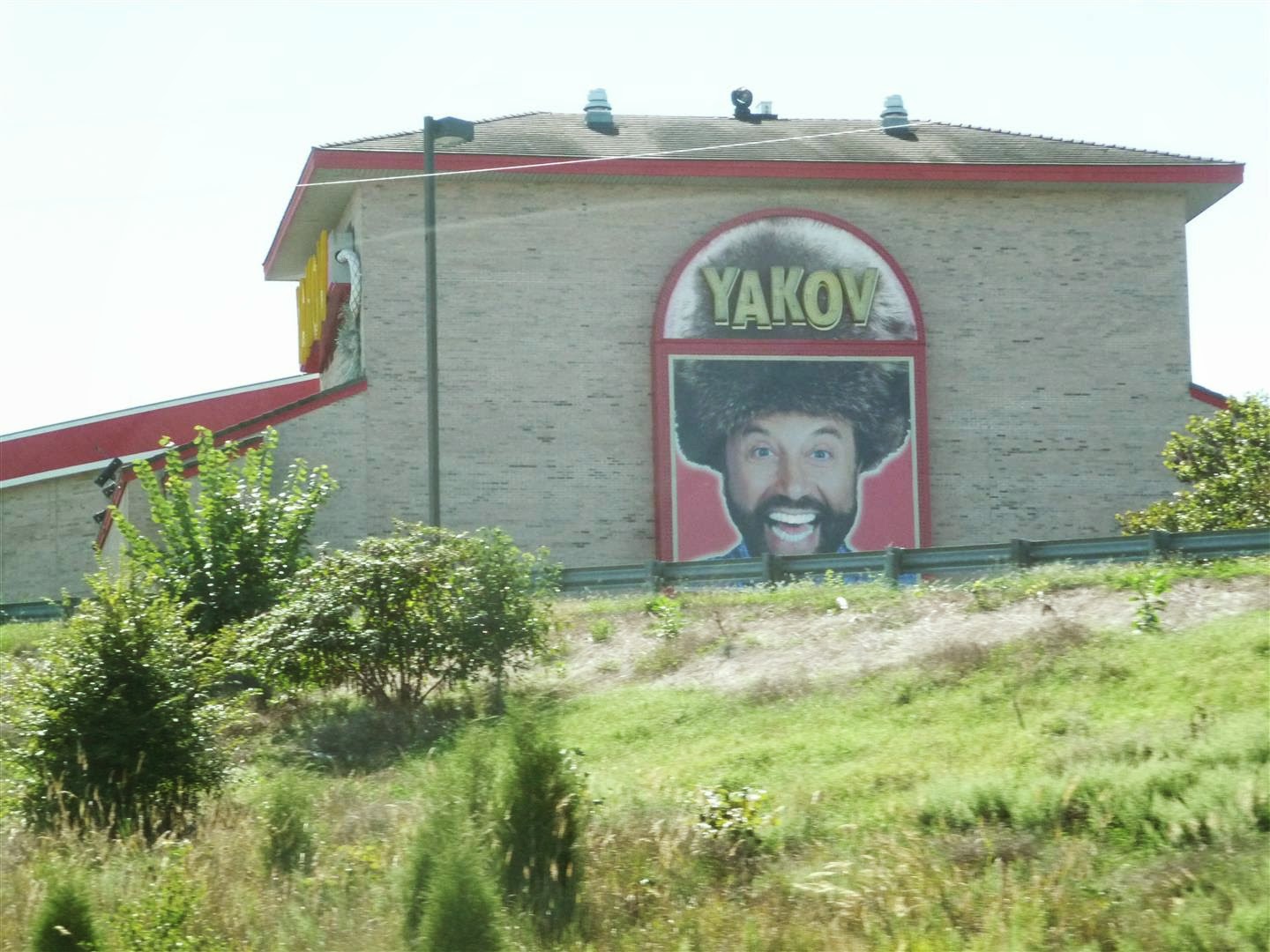 I decided to stay on US 65 almost all the way to Harrison instead of taking the back road down through Blue Eye. The latter is better on a bike but the bigger road suits the trailer. We stopped at a Conoco station just before the Arkansas line to use the facilities. The GPS, which had been posting an arrival time of 4:09 using US 62, recalculated and gave me a time of 4:18 using back roads. Then, when forced back to 62, it went back to 4:09. The Navigation option was set for Fastest Time. Go figure.

We turned onto US 62 and headed west. I saw the spot where Sandy took her awesome photo last year, right near the Alpena Monuments store west of Alpena. The road past the WalMart in Berryville was finished, wider and smoother. We wound on into ES, arriving at Motel 62 at 4:12. 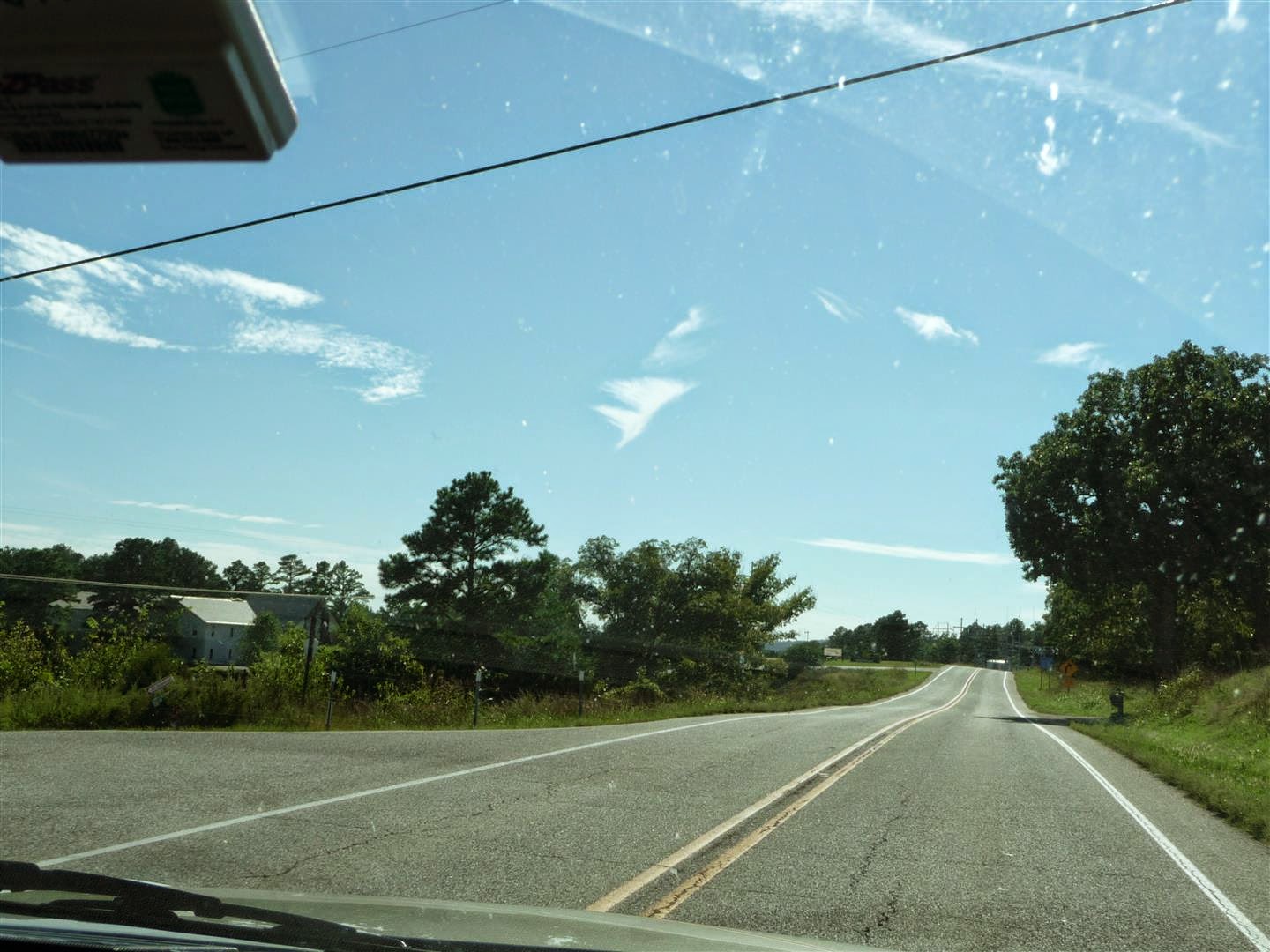 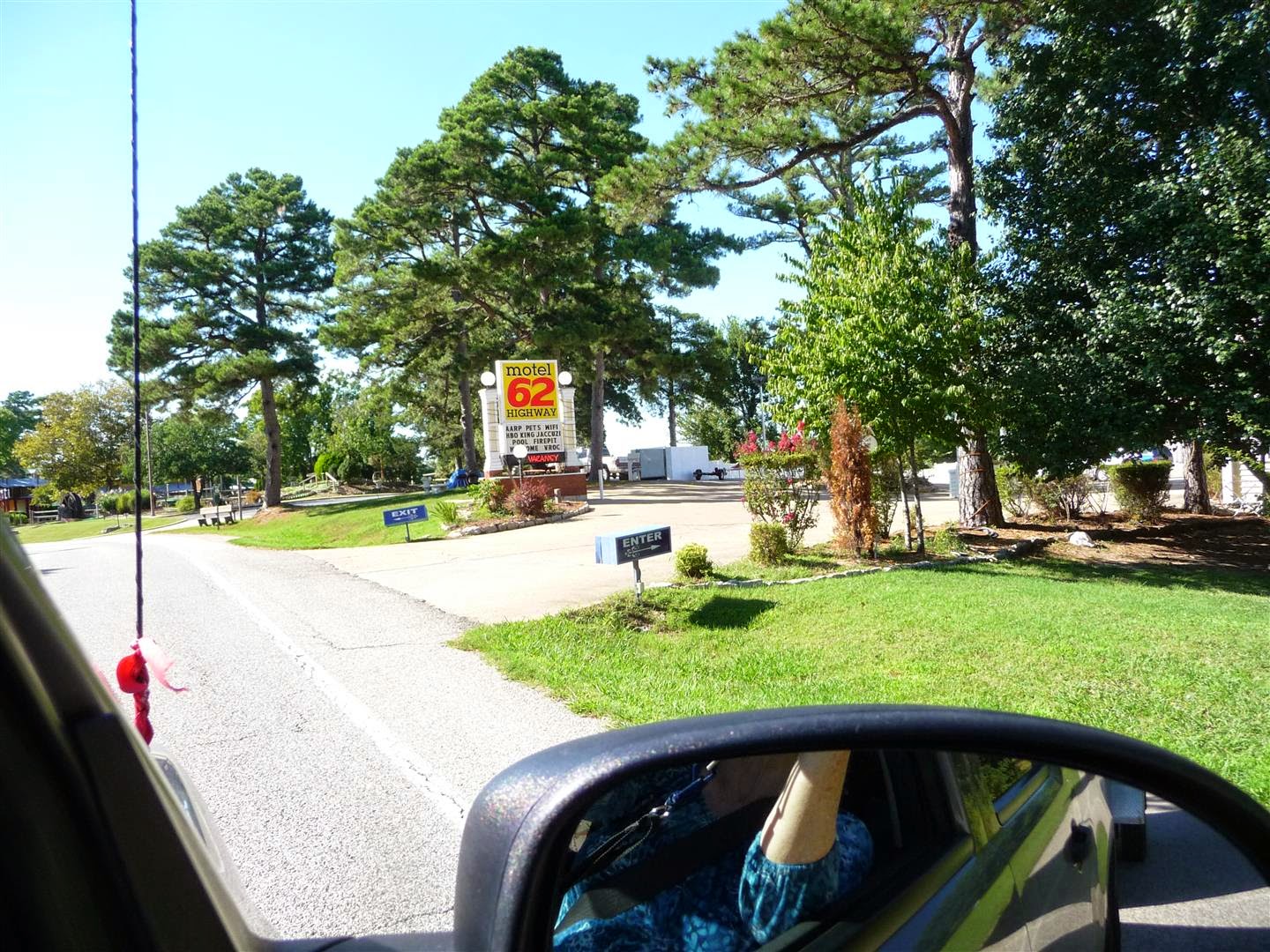 There was a small crowd of great people waiting when we got in. Sherm of course. Lanny from Arizona on his first visit to ES. Stewey from Peoria. Plus organizers Condi, JR, Brandon and Sheila (No H) from Kansas. We unloaded the bike and parked the trailer. Hauling all the gear into the room we were sharing with Sherm was easier because we could park in front of our door. 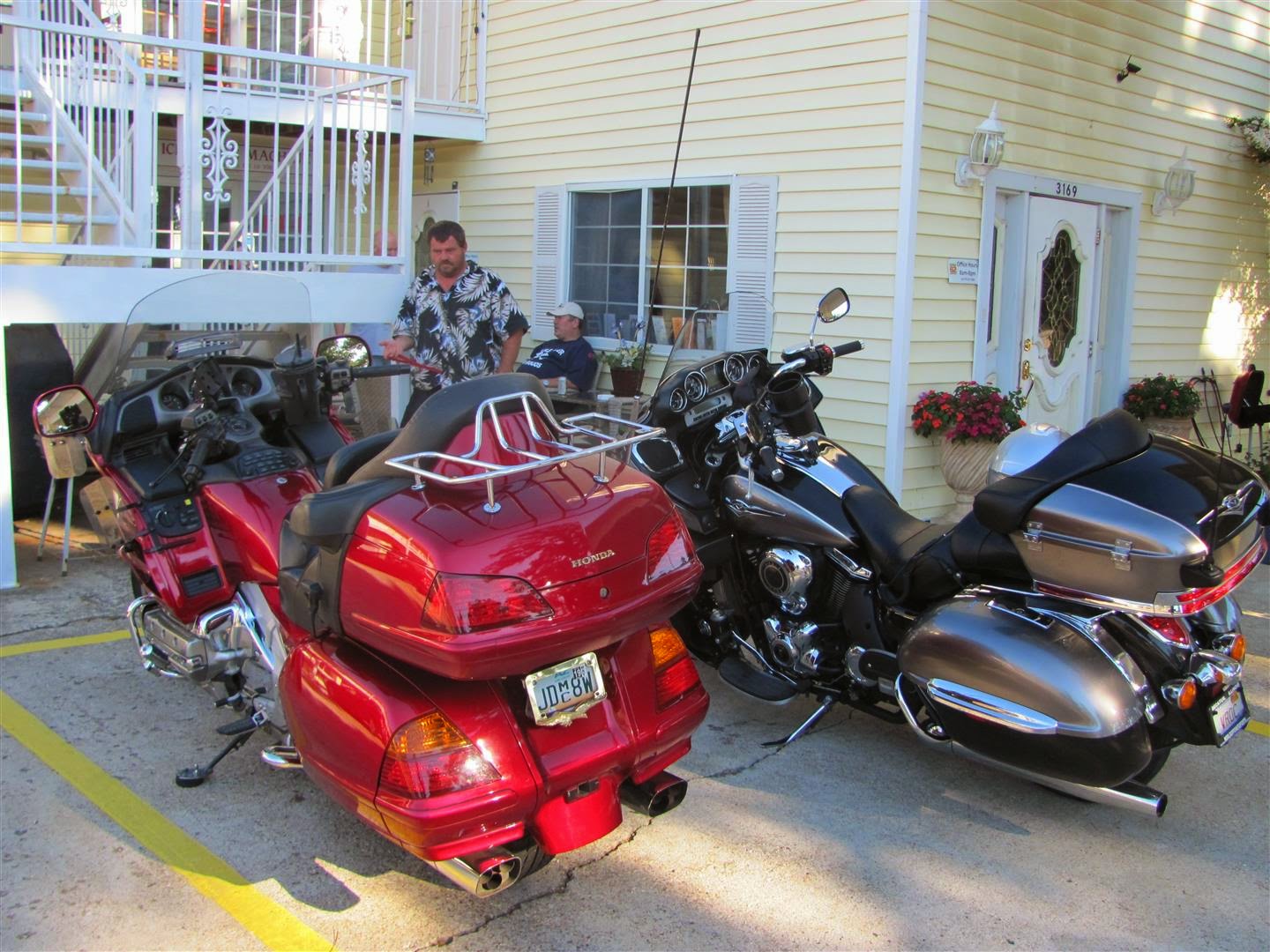 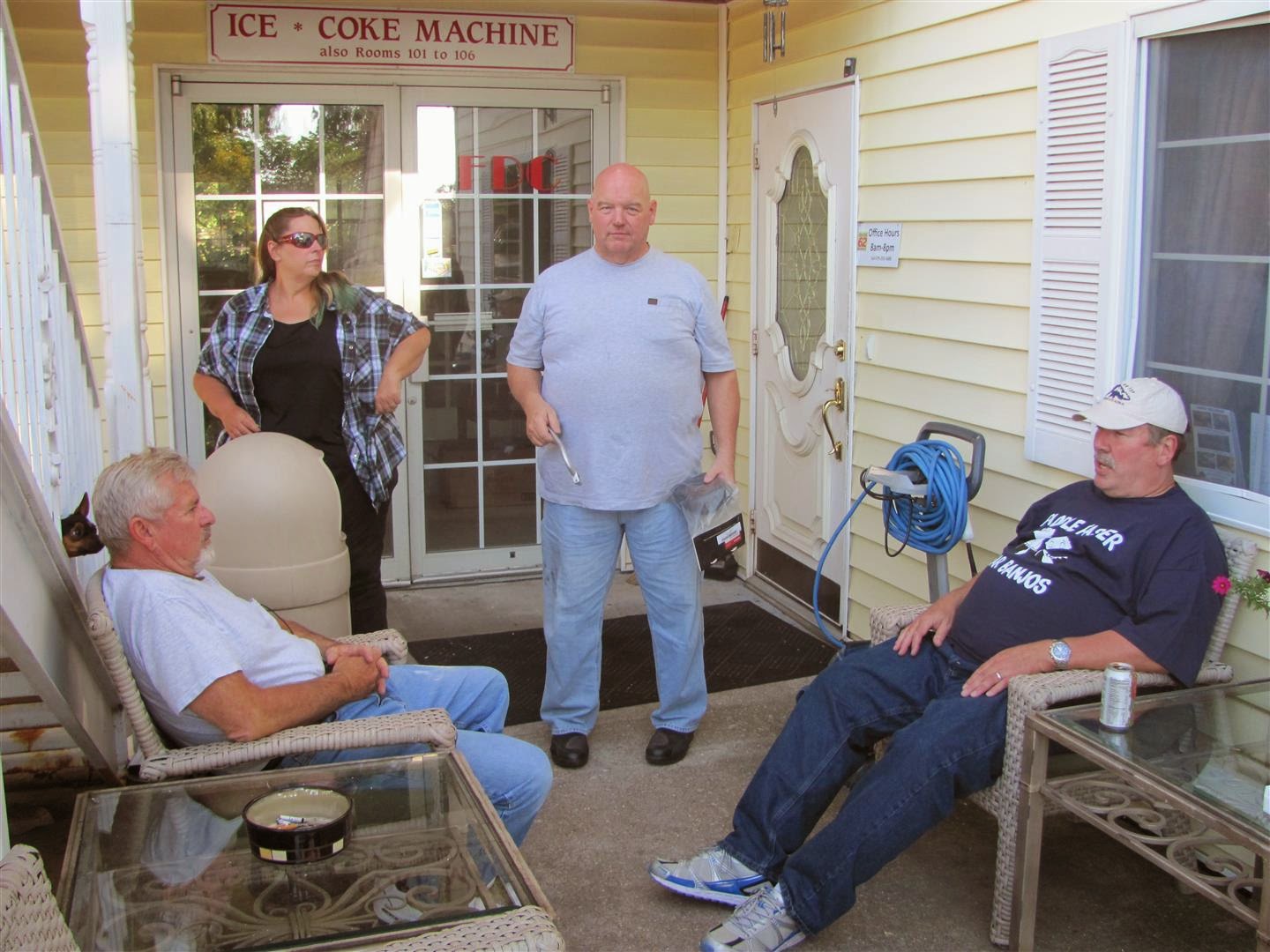 After visiting a while, we all went out to an Italian restaurant named Cafe Amore. The server was very good. JR had a monster calzone (I'm not sure how this compared to the one Mal & Yvette had in Bryson City) while Sandy and I shared Kate's Lasagna Amore. The half order was just right for us. 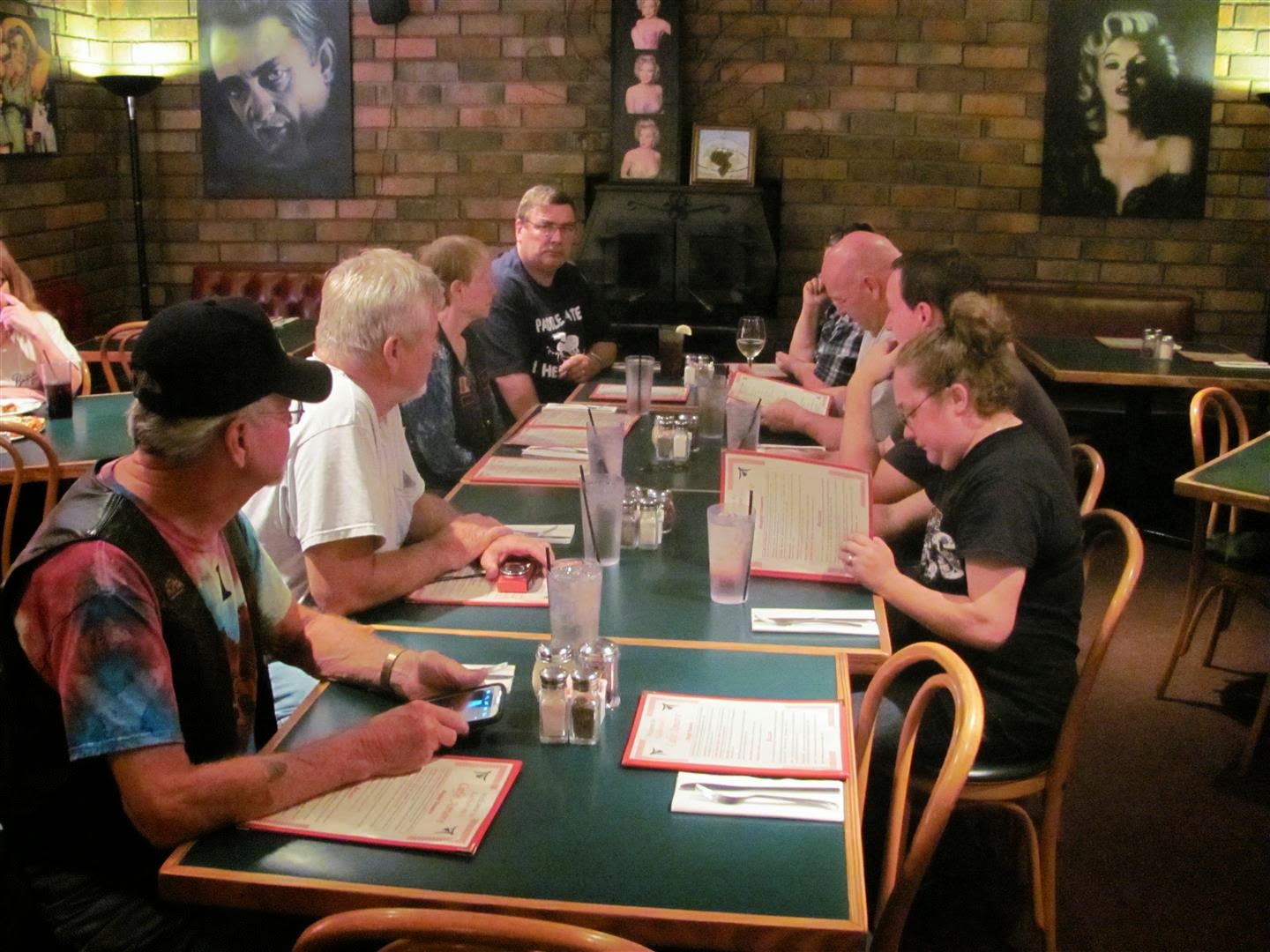 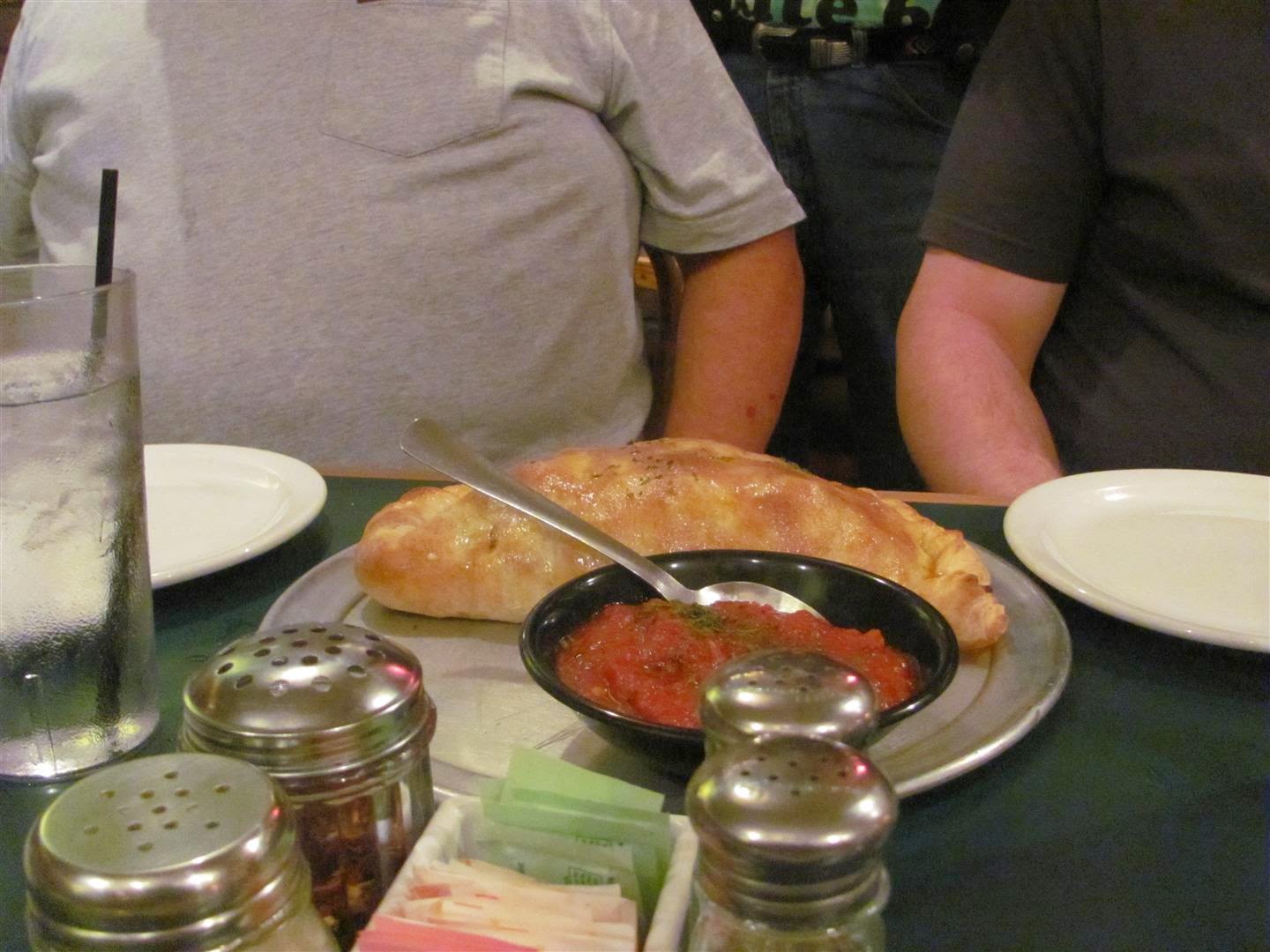 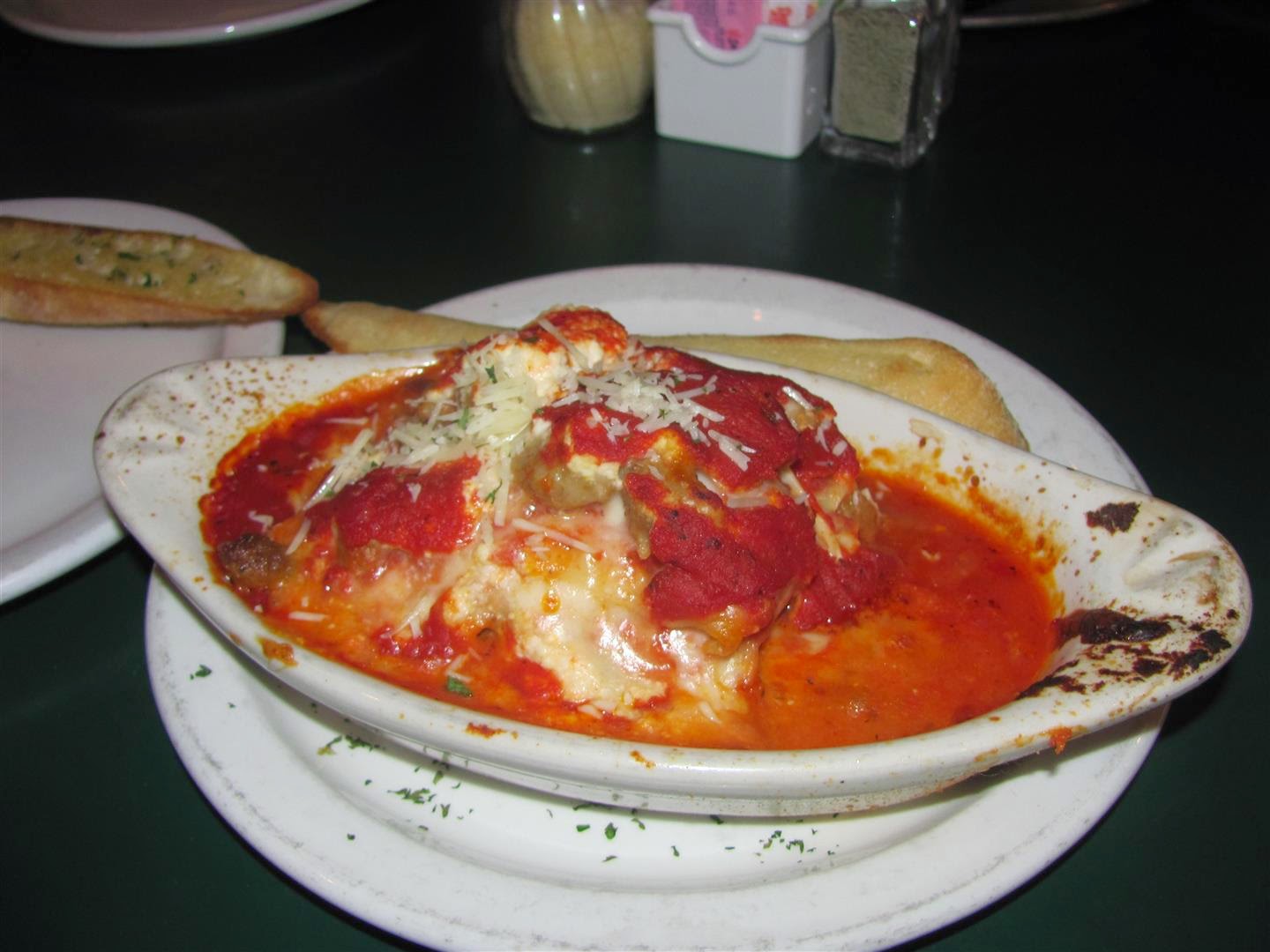 Back at the hotel, Sherm and Sandy were having issues connecting to the WiFi. My new (to me) Dell was doing well, which made me feel guilty. Lucky Al rolled in late after an 800 mile day. He was moving slowly because he damaged a few body parts when his bike fell over at a gas station yesterday, but he was here.

We finally retired to the room and went to bed. I think we must have been tired because it was all of 9:15. 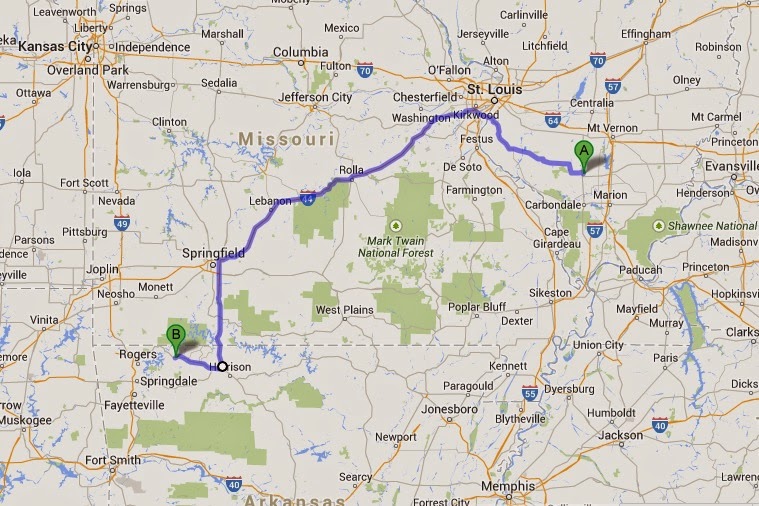 I think the rest stop in the median is a great idea!! You can over build it a tad and only have one to maintain!

Is it me or Stewey less of a man than the last time I saw him? Cranky

Driven that section of 44 MANY times and know that rest stop.....next time you go that way watch for the twin water towers in St. Clair - they're marked "hot" and "cold"!