After a summer that ahs involved way too little travel, we were really looking forward to getting on the road to the VROC Eureka Springs World Reunion in Arkansas. This has traditionally been our last hurrah before settling in for the long winter months.

It was a busy week getting ready to go. The Avalanche suffered a cam/lifter failure after the WWR trip in August, requiring a very expensive repair. To increase protection, I took it in and had the oil changed to full synthetic. I also bumped the tire pressures up from the recommended 30 PSI to 35 (the Silverado recommends 35 despite being the same weight and GVWR as the Avi). I took the trailer in to Larry's to have a loose wheel bearing checked and both sides greased. And I tried to change the rusted out exhaust tips on the bike but broke a bolt off, so I took it to Northstar to have them drill it out and re-tap the hole. They also installed the micro-switch on the brake lever so the cruise control would work and changed the burnt out trunk light bulb.

With all the rolling stock dealt with, I caught up all my Treasurer's work for the MS Society and the Freedom Riders, as well as attending the first Action Sudbury meeting of the fall. And I still got in nine holes of golf on Tuesday. After all this, I was really ready to get out of town.

We had steady rain all yesterday afternoon and evening, so the bike didn't get loaded until after I got up this morning at 5:30 AM. It was warm last night despite the rain, but a cold front had passed through since then. The temperature this morning was 7C but felt like 3 (38F for those using that other scale), however, the rain had ended. With the cold and damp, it was a perfect morning to appreciate our membership in the WHORE (We Haul Our Rides Everywhere) ranks. Sandy was smiling as she climbed into the cab of the truck.

After getting breakfast and coffee at Tim Horton's, we were rolling at 7:30 AM heading out through the Soo. Our destination for the day was Michigan City, Indiana, just over 600 miles away. As we drove along, we tuned into talk radio and listened to the coverage of the 13th anniversary of the 9/11 attacks.

The leaves were starting to change colour as we chugged along into a headwind. We stopped at Tim's in McKerrow to use the facilities and so I could re-torque the trailer lug nuts. They were fine, as were the bike tie-downs. However, there was a glitch. When I ordered the trailer, I got the optional rear stabilizer jacks to allow me to load the bike without being hooked to the truck. I had them down the other day to check the bearings and I guess I didn't get the left one locked up properly. I don't know how long I had been dragging it, but the flat foot plate was ground off as was part of the shaft. One mounting bolt was broken but the aluminum mounting plate was thick and didn't suffer any damage. I got out the tool kit and removed what was left of the jack. I'll have to mount a new one when I get back. 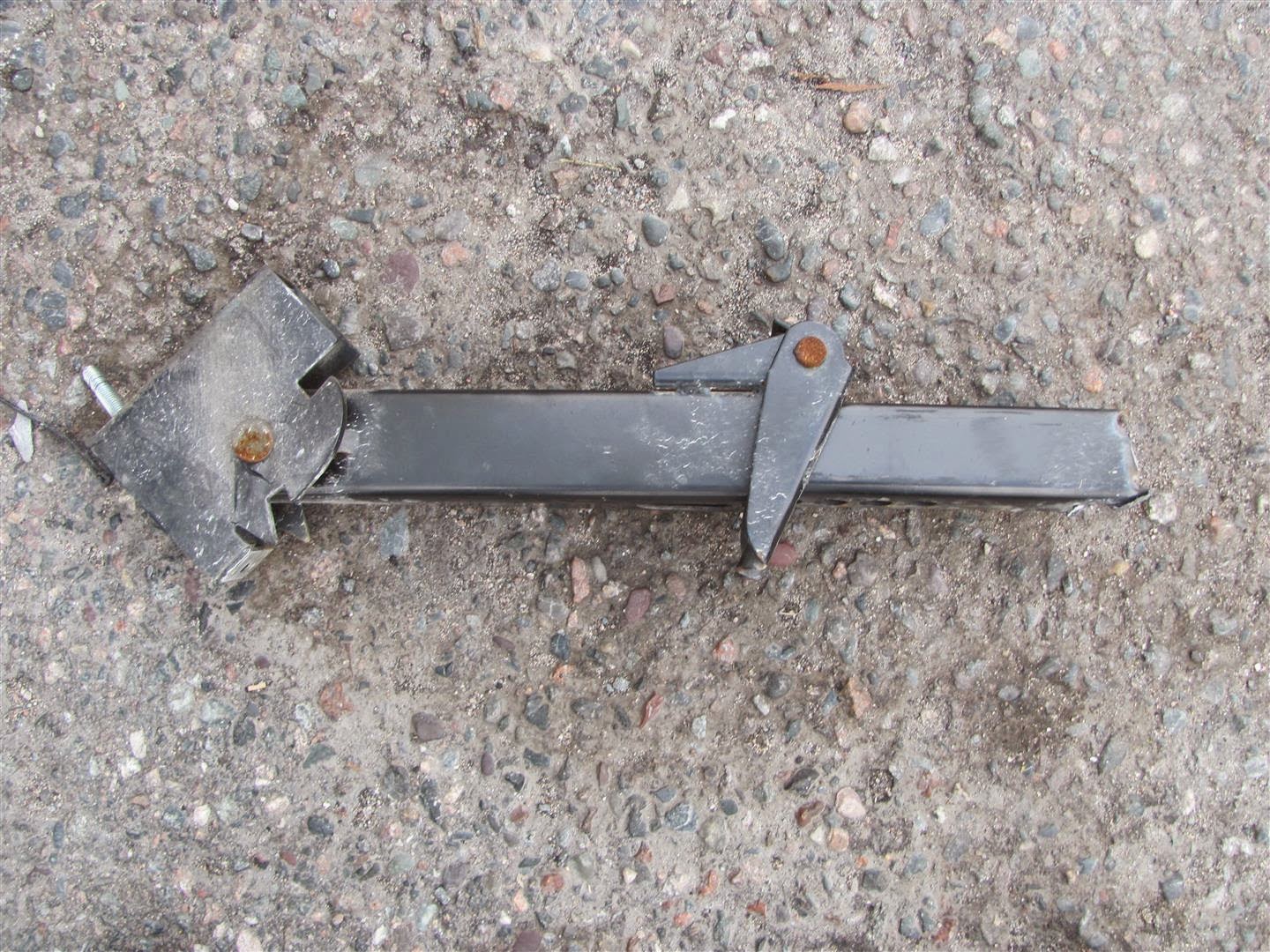 All that's left of the left rear stabilizer jack 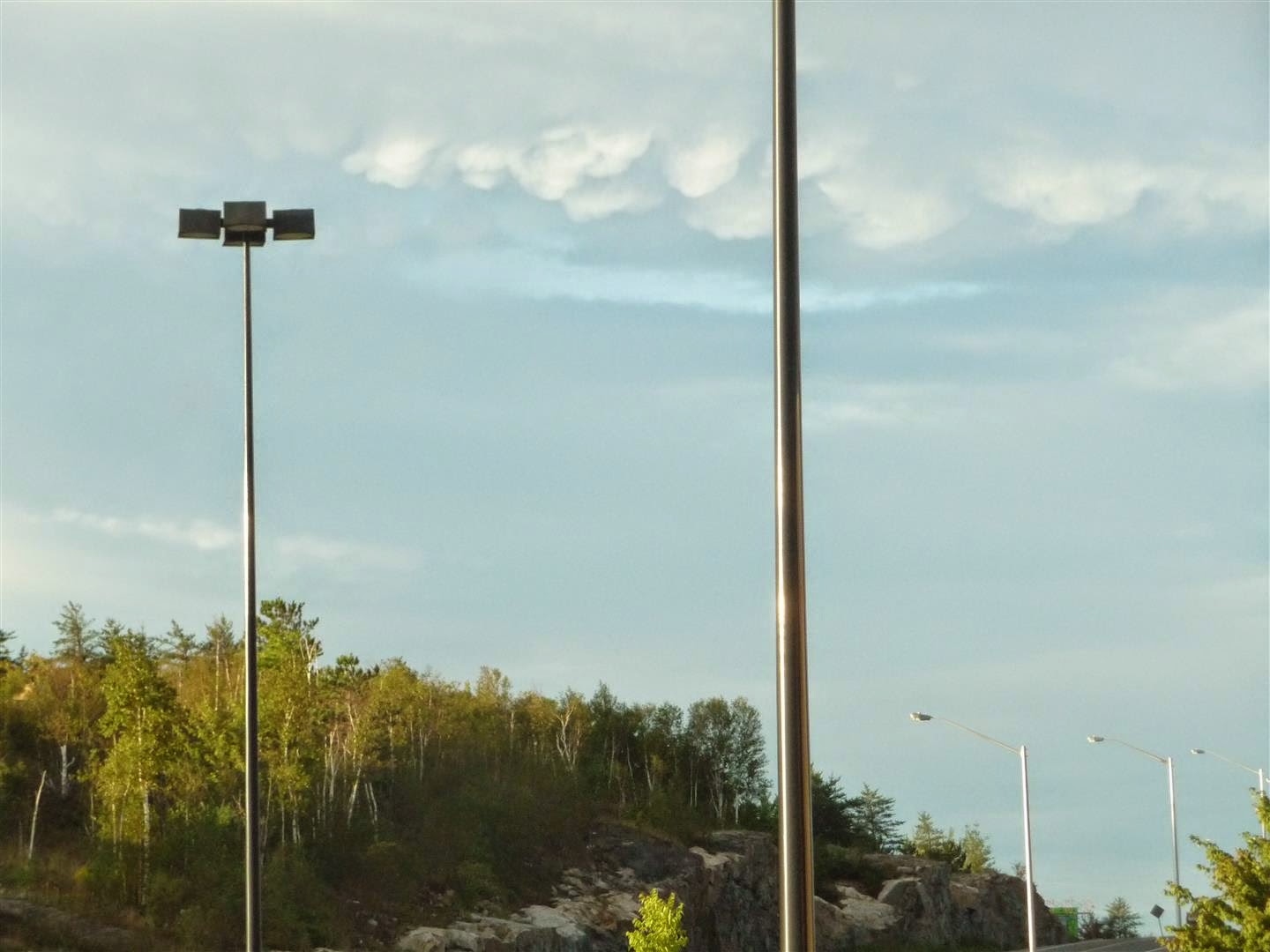 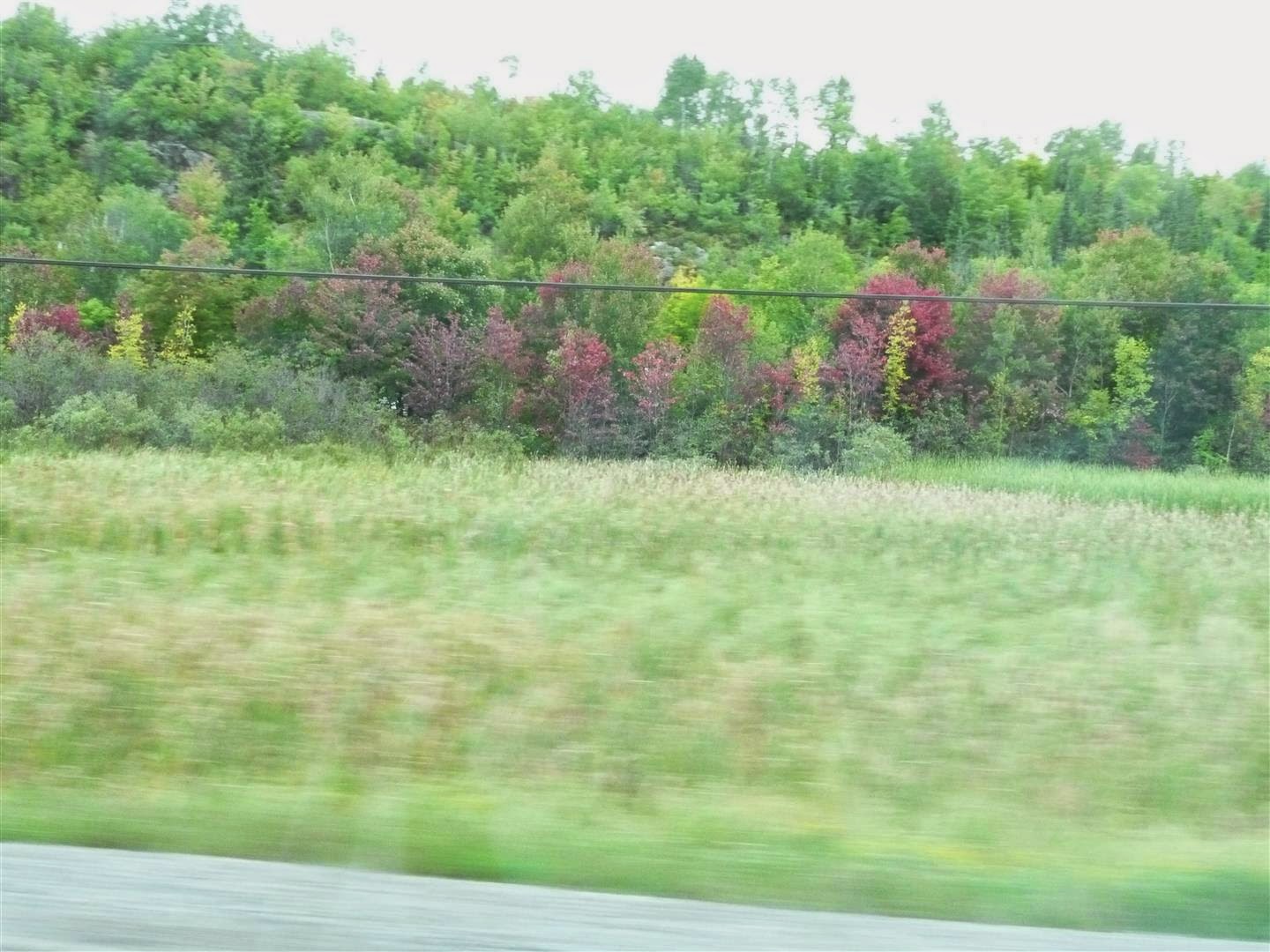 The rest of the trip to the Soo was uneventful. We stopped at still another Tim's for a comfort break and then proceeded to the International Bridge after taking a detour to avoid a closed section of Wellington Street. I stopped to put the extended absence greeting on my Canadian cell phone and get out my US TracFone, a ritual every time we cross the border.

The International Bridge crossing can be a problem if traffic gets backed up but today was a charm. It took a total of 15 minutes to wait in line, talk to the officer and then clear the toll booth. All this despite heavy construction work on the plazas. The electronic signs above each lane were configured to remember 9/11, a nice touch. 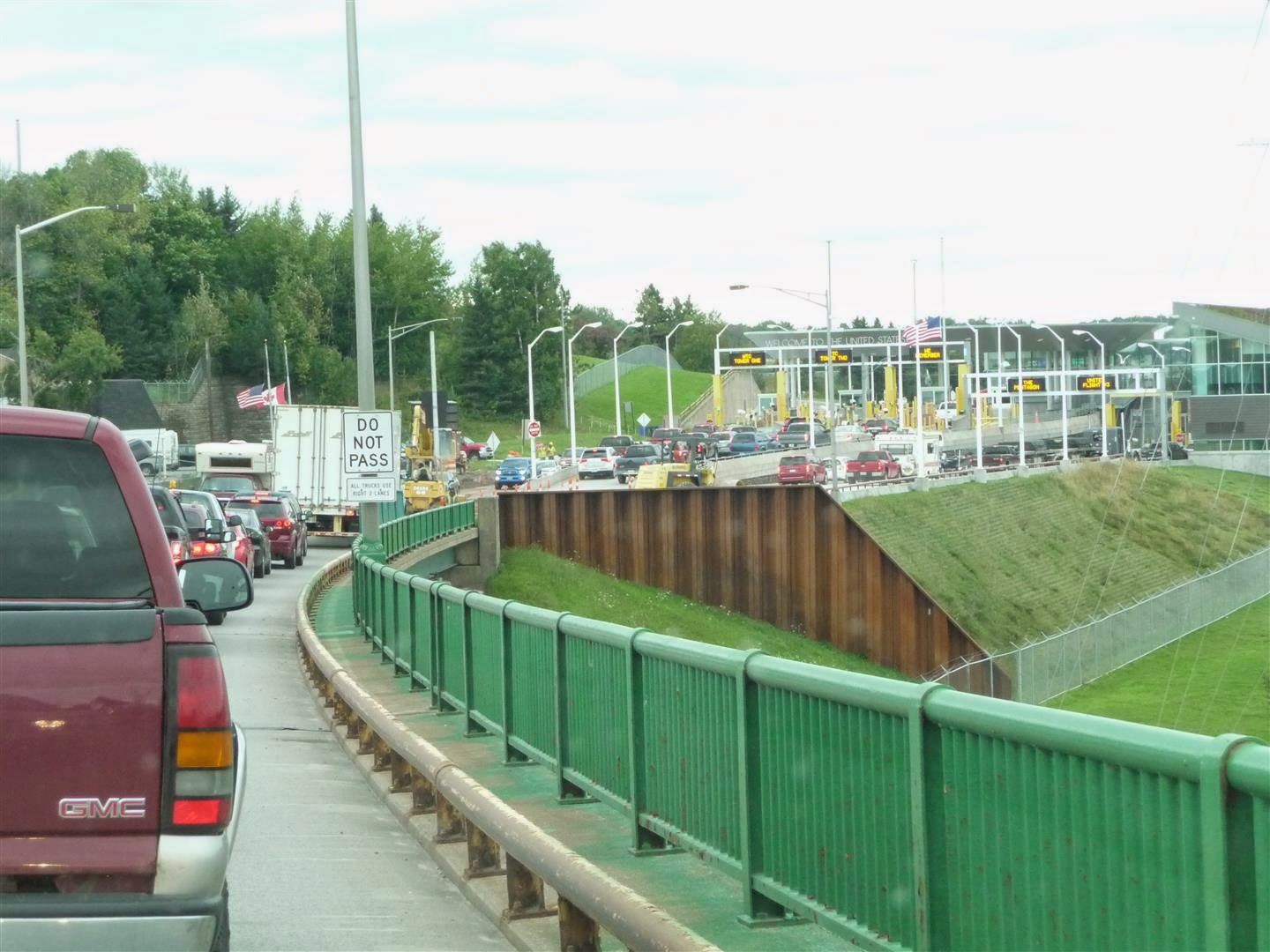 Short line at the International Bridge 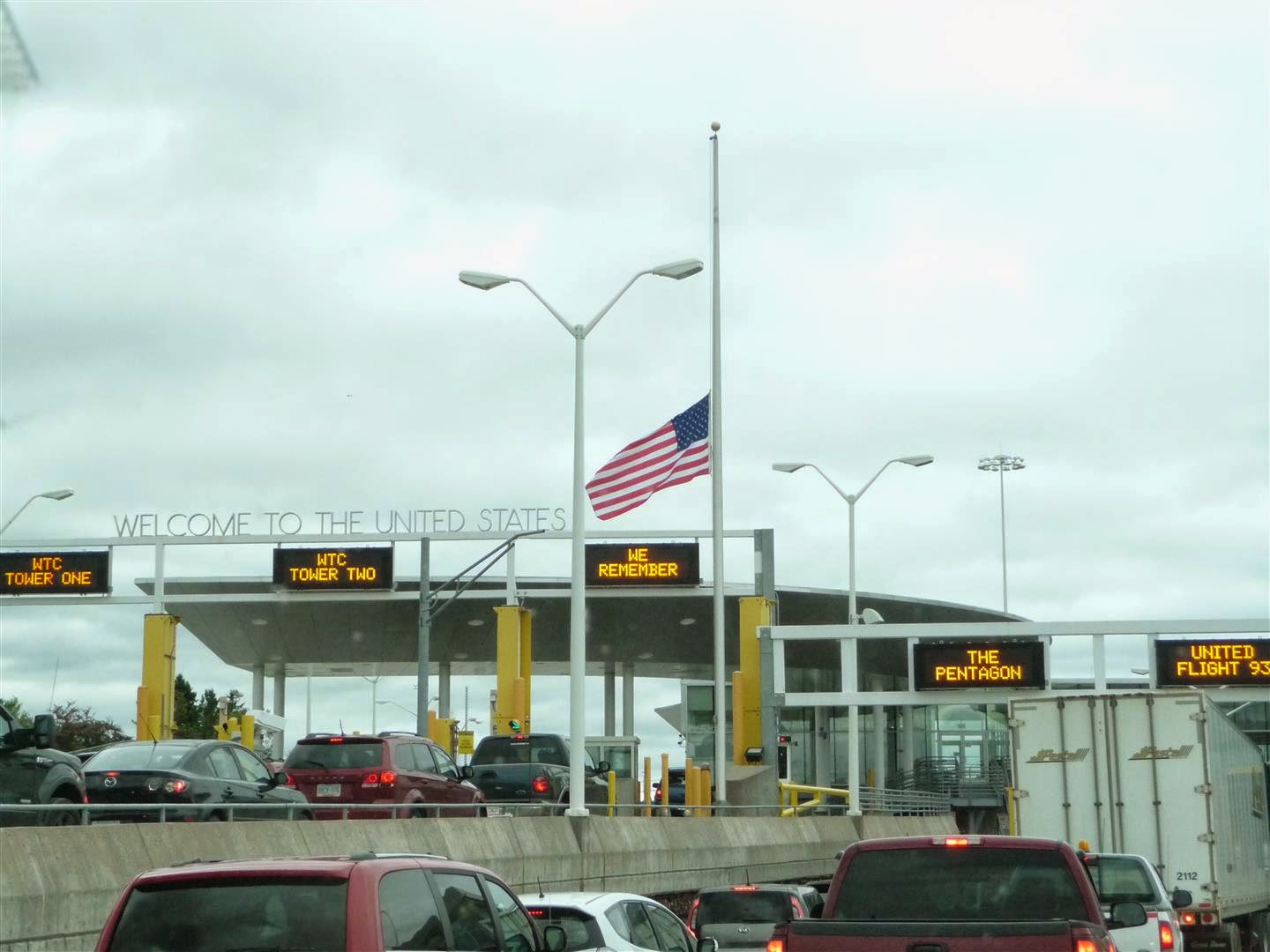 Just off the bridge, we saw an electronic sign that said "Don't veer for deer". The latest recommendation is that, if a collision is unavoidable, it is better to hit the deer rather than swerve into oncoming traffic or go off the road and roll. I can't see this as an attractive strategy when on a motorcycle.

On the way south, we encountered an southbound  stretch of I-75 that was closed due to construction. We were forced to get off at Rudyard and follow a back road almost to St. Ignace. Then we found the Mackinac Bridge was under construction and traffic was restricted to the centre steel grate lane. Actually, this is not unusual since they are usually doing bridge maintenance. It didn't bother us in the truck but a few bikes ahead of us didn't like it. One was a Warthog, a law enforcement club. I gave them plenty of room in case they got into trouble. 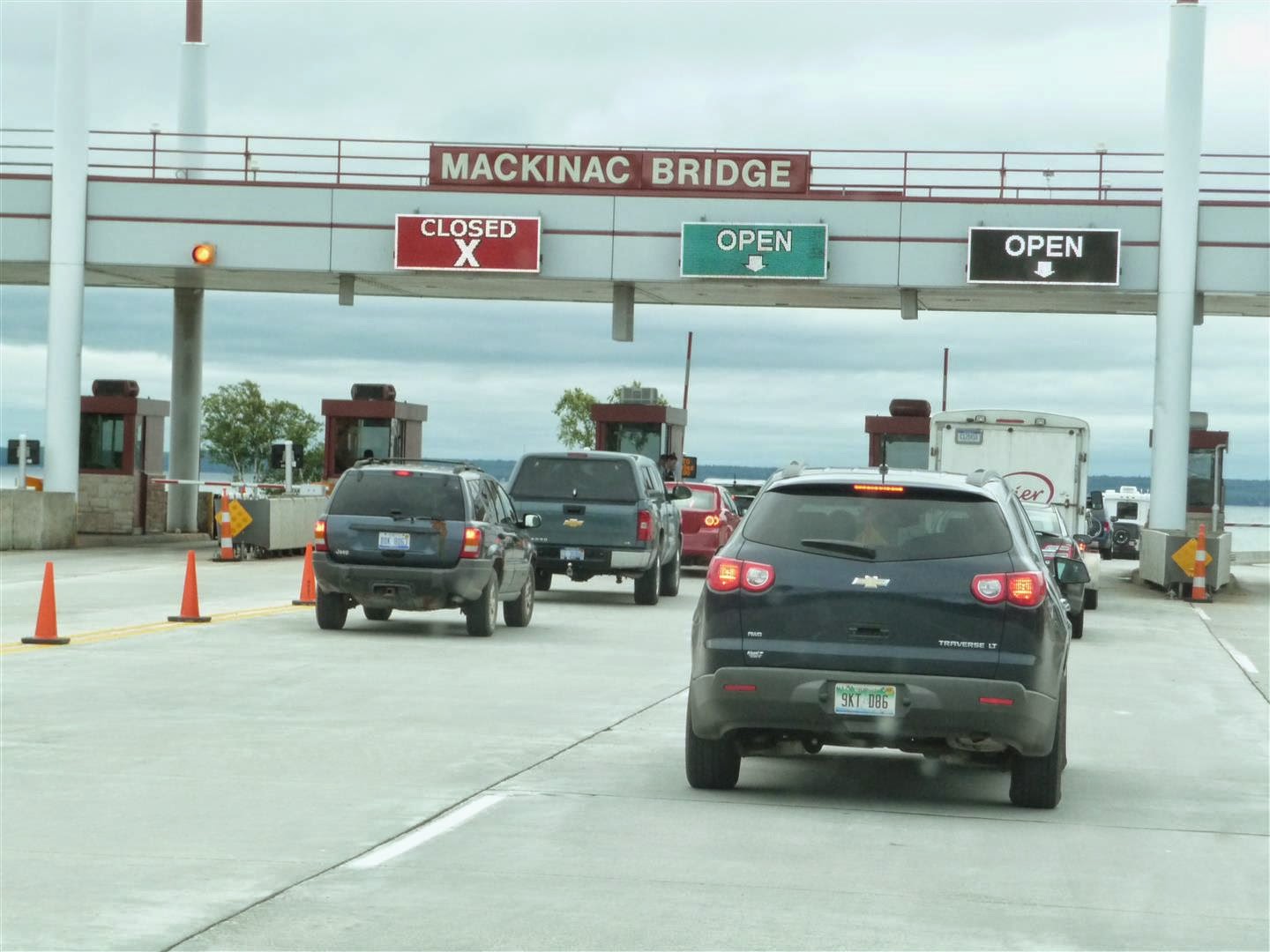 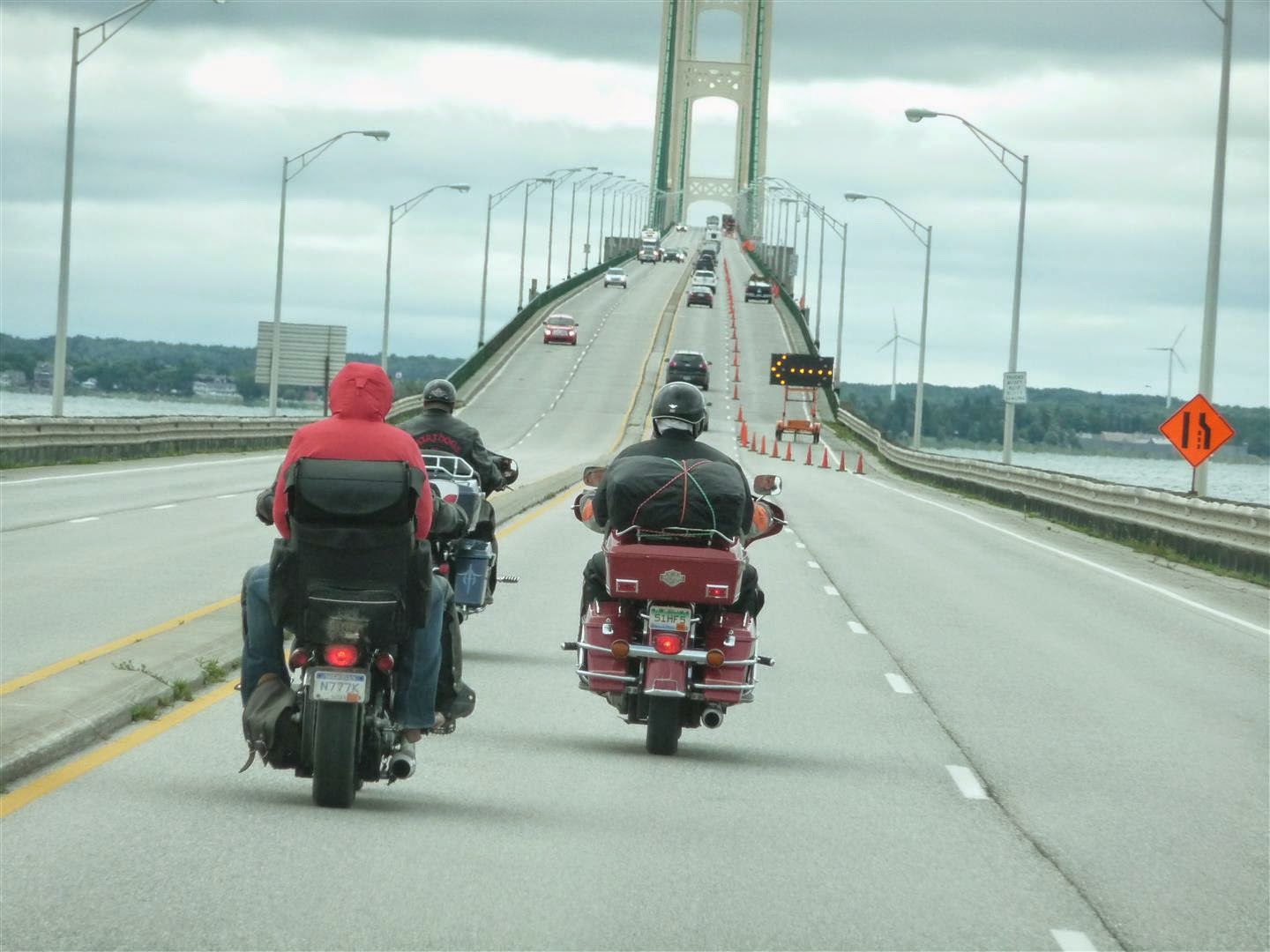 We stopped at Indian River for fuel. I was hoping to get a gas station sandwich but they didn't have any, so we settled for the McDonald's across the street. Up until now, I had been experimenting with traveling 55, 60 and 65 MPH. All seemed to be giving me the usual 12 to 13 MPG. So I cranked it up to 70 and, instead of downshifting for the hills, I cancelled the cruise control on the grades. The fuel mileage was the same, perhaps a tad better. The new driving mode should enable us to cover more ground for the same cost.

We left I-75 for US 127 South and followed it to US 10 near Clare. Driving east on 10, we stopped at a Marathon for some snack food to help me wake up. I got cheese and venison sausage in a package that took my Buck knife to get open.

Reaching US 131, we turned south. Before Grand Rapids, we had to get off and take another detour due to a closed freeway. With all the road construction going on, I have to wonder where Michigan is getting all the money. 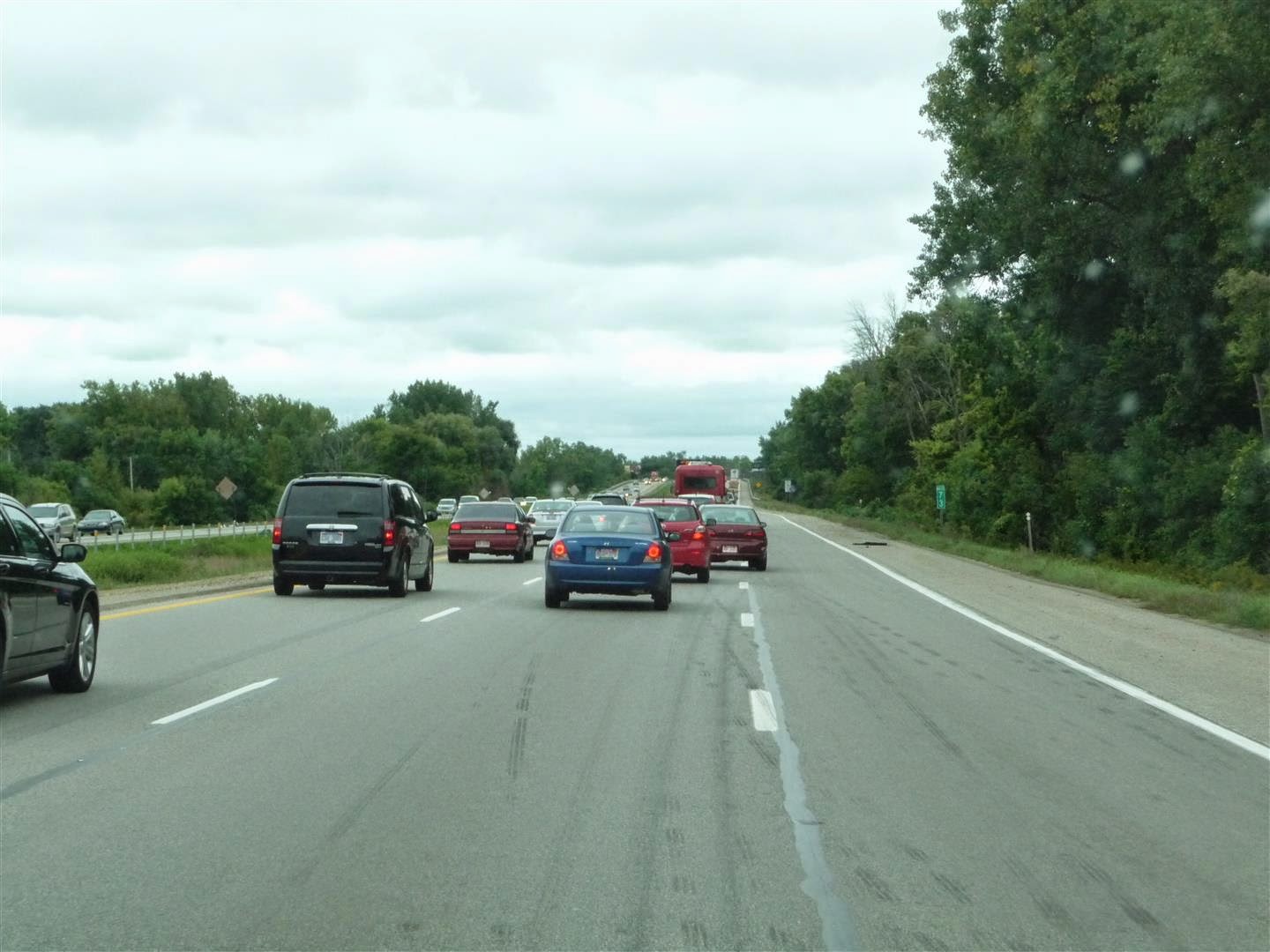 Another line to get off a closed freeway 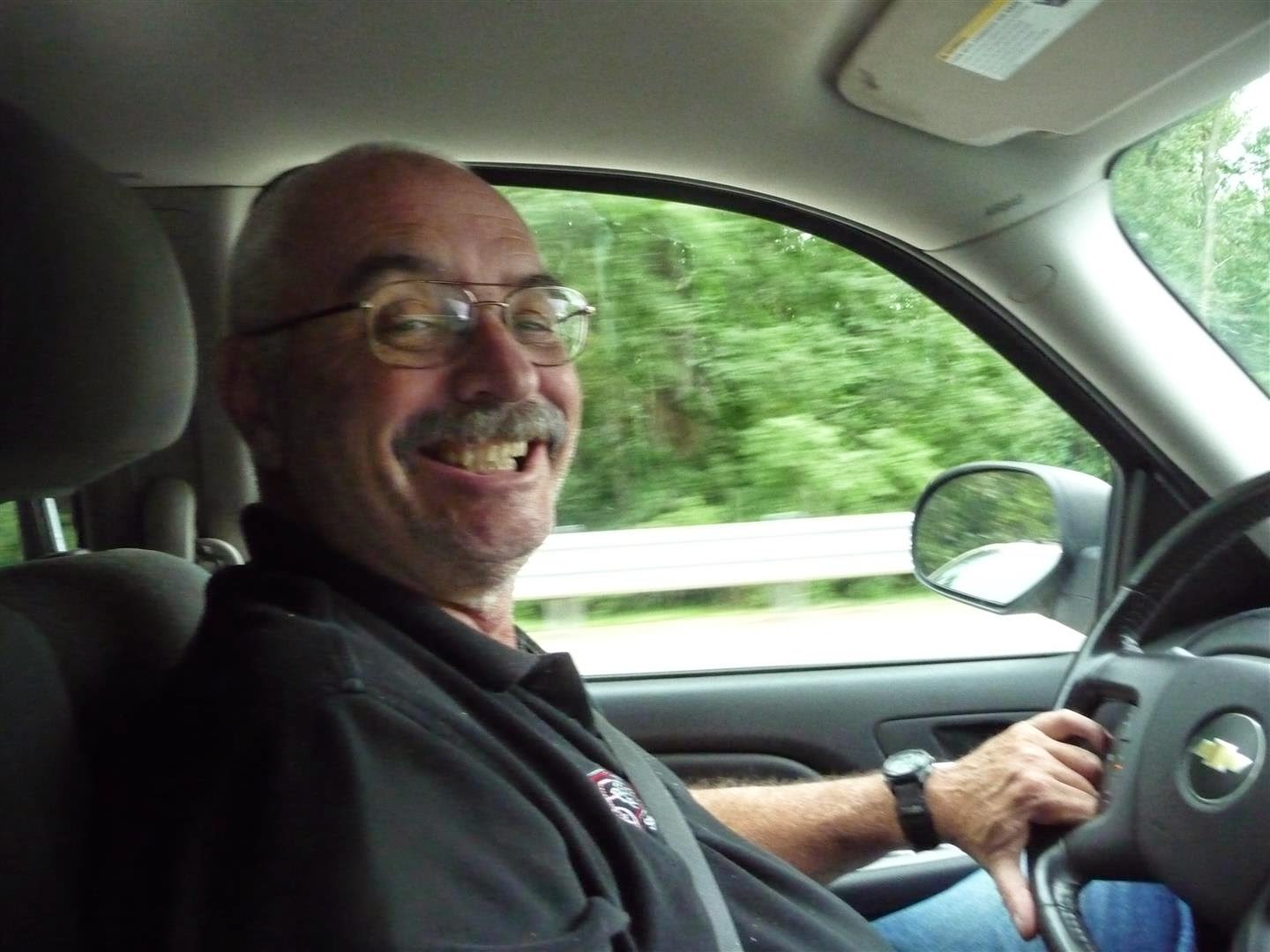 We made one last stop at a Benton Harbor exit for more fuel. Sandy, the kids and I accidentally found ourselves in downtown Benton Harbor back in 1989. It was like a scene from On The Beach with all the stores closed and nobody to be found. It was scary. We didn't go back downtown to see if it has improved.

Sandy phoned her Mom as we were in the home stretch to let her know that all was well. We arrived at the Super 8 in Michigan City just before 8:00 PM. There was a Culver's restaurant nearby but, after the snacks, neither of us was hungry enough to walk over. I spent the evening posting the bills, importing the photos, making the maps and finishing this blog entry. I want to stay as caught up as possible this trip.

There is a couple here at the S8 who left Moose Jaw, Saskatchewan yesterday evening heading to visit family in Ontario. The guy is RCAF and was formerly in Cold Lake. He rides a 900 Vulcan Classic so I suggested he check out VROC.

Tomorrow, we head on the DuQuoin, Illinois and the GWRRA (Gold Wing Road Riders Association) Ride In being organized by Willie Wonka and Carlene. We'll ride with them on Saturday before heading on to ES on Sunday morning.

By the way, I left the ASUS XP Netbook at home and am using a Dell Inspiron Windows 7 machine that I inherited from my father-in-law. So far, a few challenges have cropped up but nothing that I haven't been able to deal with. 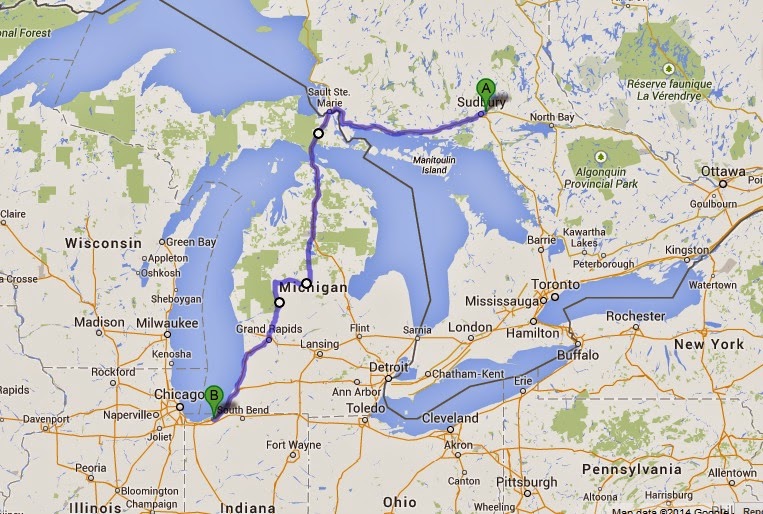 Jim, I like you to teach me how to do this interactive map. I was thinking yesterday that something like this would be useful for my blog. Oh, you will have to remind me as I will forget all about it.